A Food & Culture Tour of Chinatown 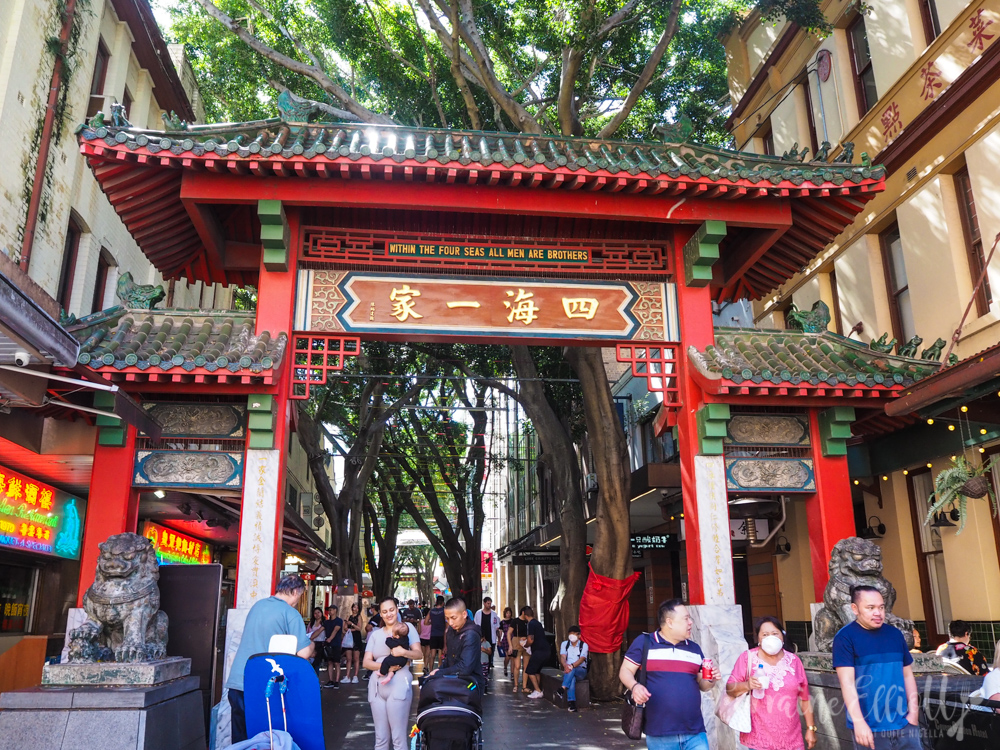 Local Sauce Tours holds tasty and educational tours of Sydney's Chinatown. These 2.5 hour food tours focus on regional Chinese cuisine finding smaller operators that do things well. Along with plenty of food to try there is also an in depth history given about Chinese people in Australia. It's also very well priced at $60 per person (and they take Dine & Discover vouchers too!). 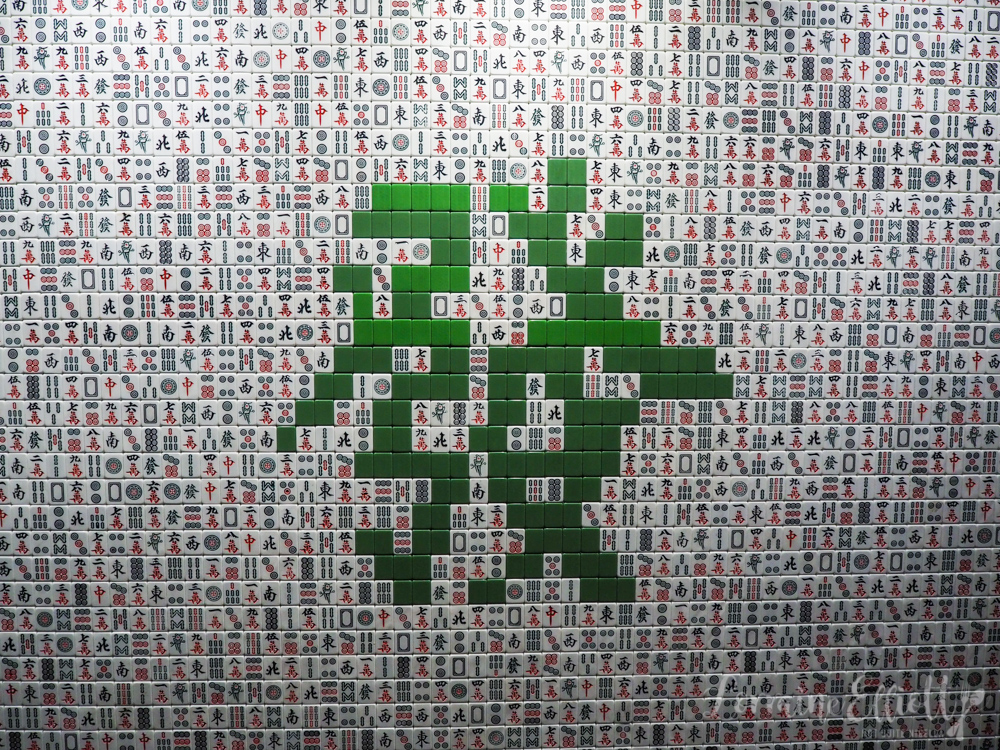 Prior to COVID-19 Local Sauce's founder Justin Steele was doing well. Most of his patrons were tourists from overseas or interstate who took part in his tours of Sydney giving them quintessentially Sydney or Australian experiences. But once COVID hit, business stopped. He had to take on a full time job and he rebranded as Local Sauce Tours. He also changed his tours to cater to locals and this Chinatown tour was added to the portfolio in November 2021. Even with borders now open, it is a slow climb back to its previous levels. Justin speaks fluent Mandarin and has lived and studied in China and his tours aim to support small restaurants with a maximum size of 12 people. 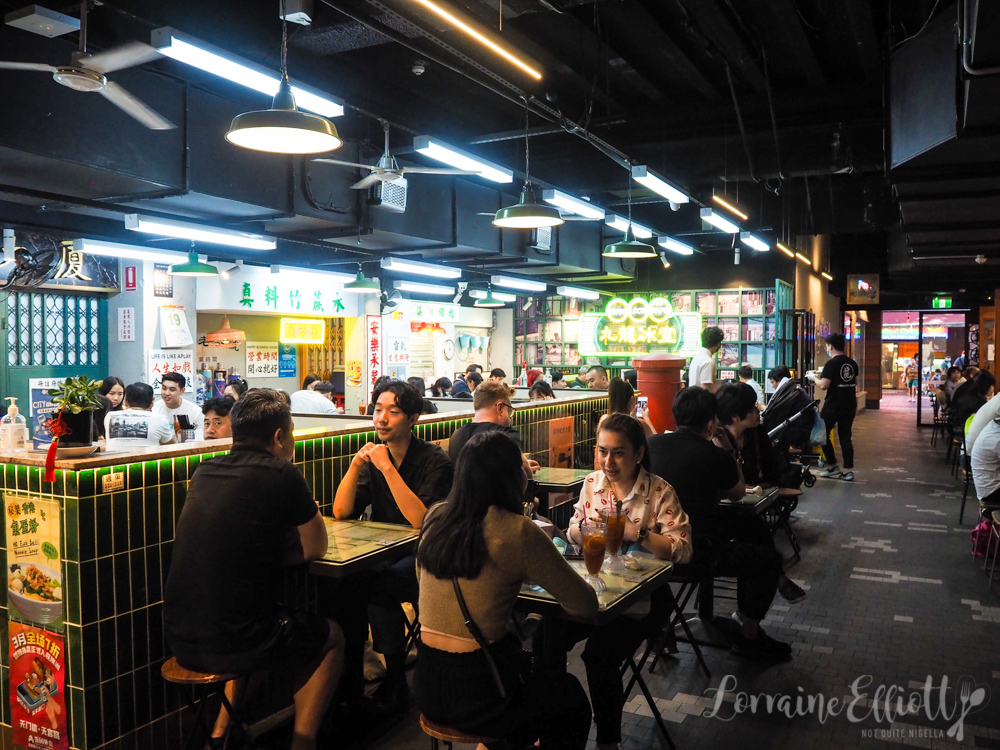 Monica and I meet Justin outside Paddy's Markets at 11:30am on a Sunday. There are around 5 food stops on this tour that goes for 2-2.5 hours and Justin starts with a bit of history about the first Chinese person to arrive in Australia. In 1818 just over two hundred years ago when Town Hall Station was a cemetery, a young man in his 20's called Mak Sai Young arrived in Sydney as a free settler from Guangzhou in Southern China. He started off as a carpenter for the early settlers and then was granted a pub license for the Golden Lion in Parramatta. He came to be known as John Shying and his descendants became furniture and cabinet makers and undertakers. Justin shows us a photo of Mak's descendants, 7 generations later. 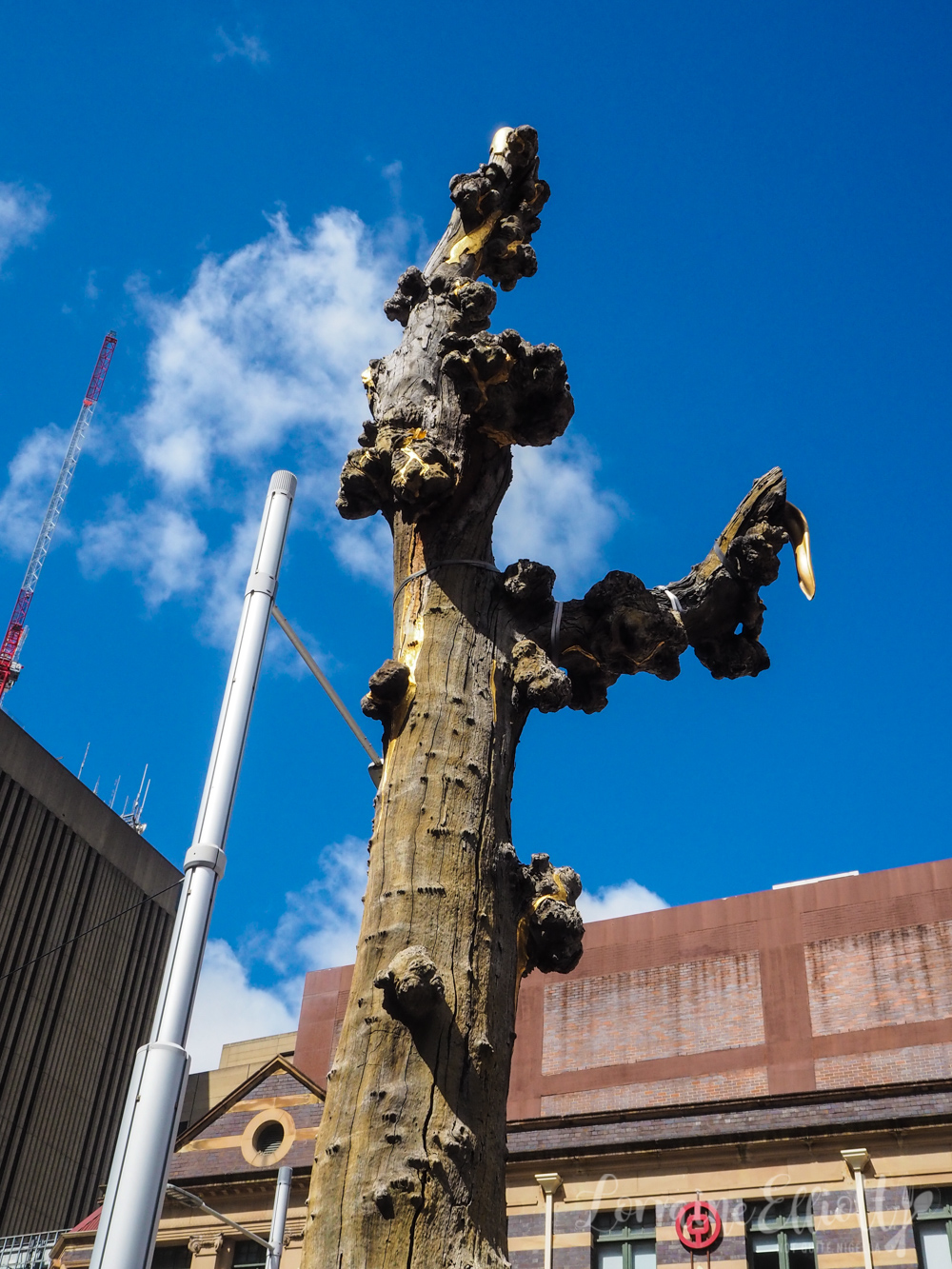 We then move onto an art installation nearby called the "Golden Water Mouth" by artist Lin Li which is made from the trunk of a yellow box eucalyptus gum tree from outback NSW covered in 23 carat gold. It is here that Justin tells us the history of the Chinese arriving at the gold rush and the discrimination they faced being hit with a port tariff ten times that of European workers. So instead the Chinese landed in South Australia and made the 500km trek to the Victorian goldfields where they discovered the alluvial goldfields of Ararat. Ararat is the only city in Australia to be founded by the Chinese. 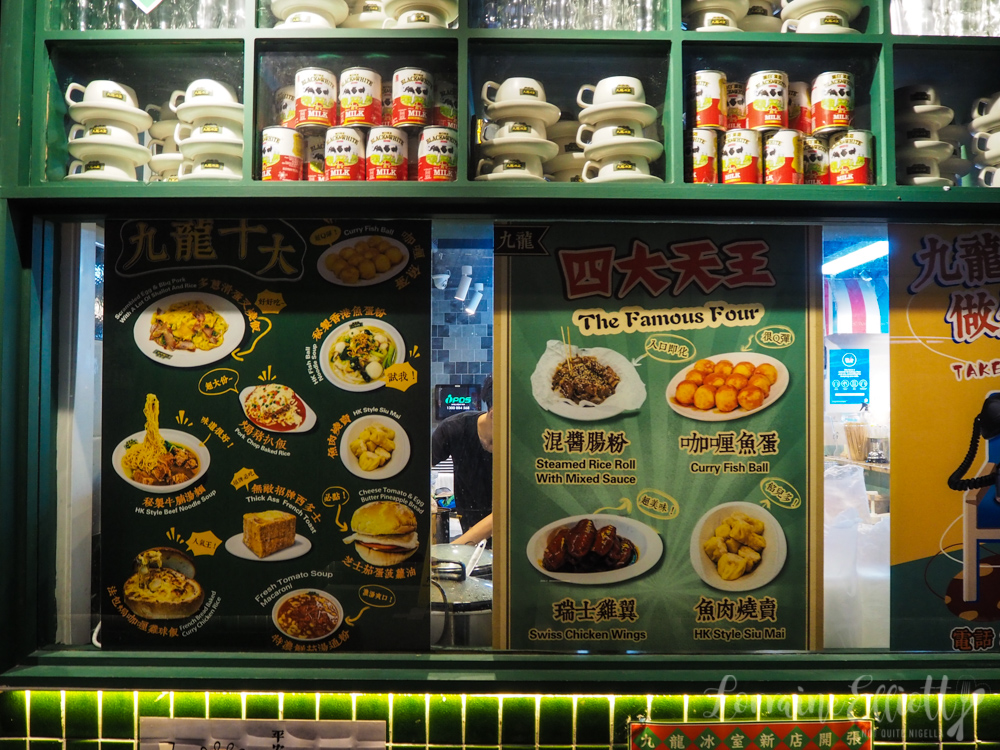 Then it's onto our first stop down a little alleyway to Kowloon Café. As the name suggests it specialises in Hong Kong style snacks and packs out every day from when they open. The decor is just like being in Hong Kong (although a bit more polished) and we get our first bites of the day, the Hong Kong curried fish balls. These are so popular that they go through 1,500 a day. 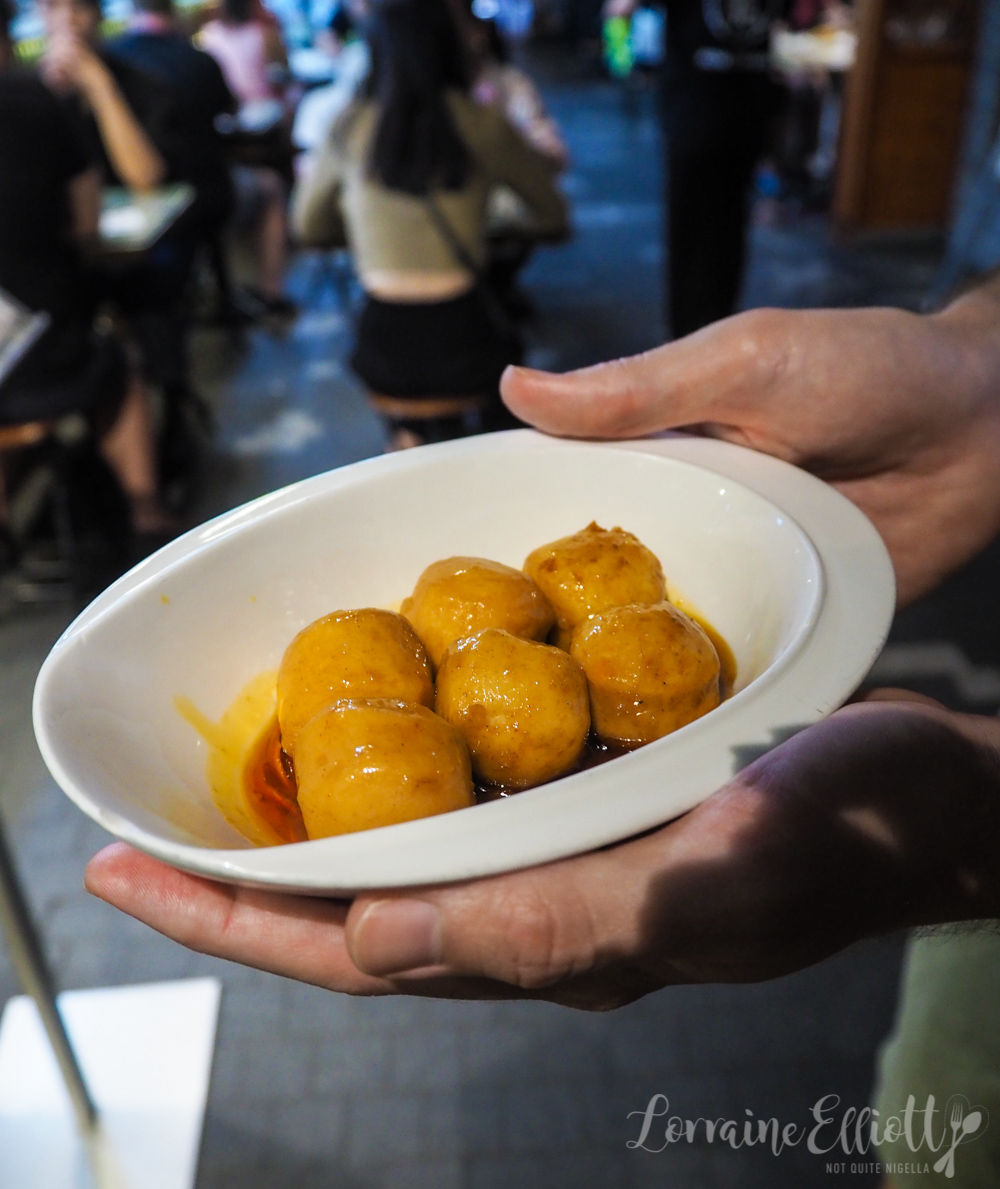 They're delicious especially when you get some of that creamy curry sauce too. These fish balls are made in-house and have a springy texture. Justin also hands us each some chopsticks as a souvenir that we will also use during the tour. 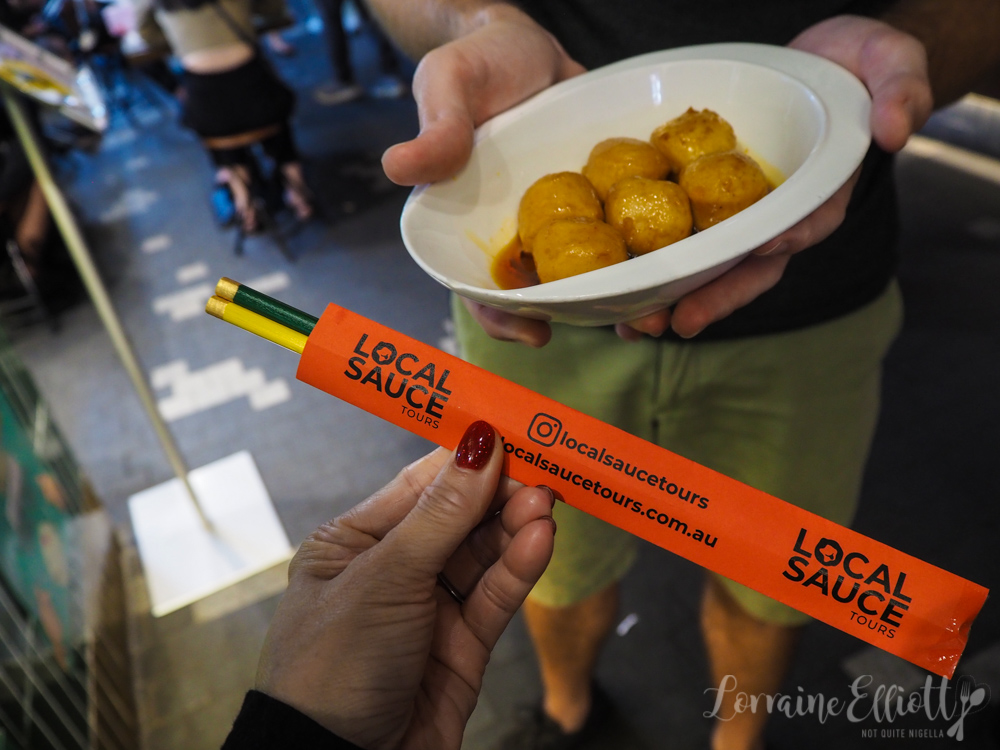 Before we leave Justin shows us an art gallery installation which I must admit I have never noticed. It's by Liu Dao, a multidisciplinary digital artists collective who keep their identities secret. Liu Dao have collaborated with Louis Vuitton among others and artworks are created by multiple artists. 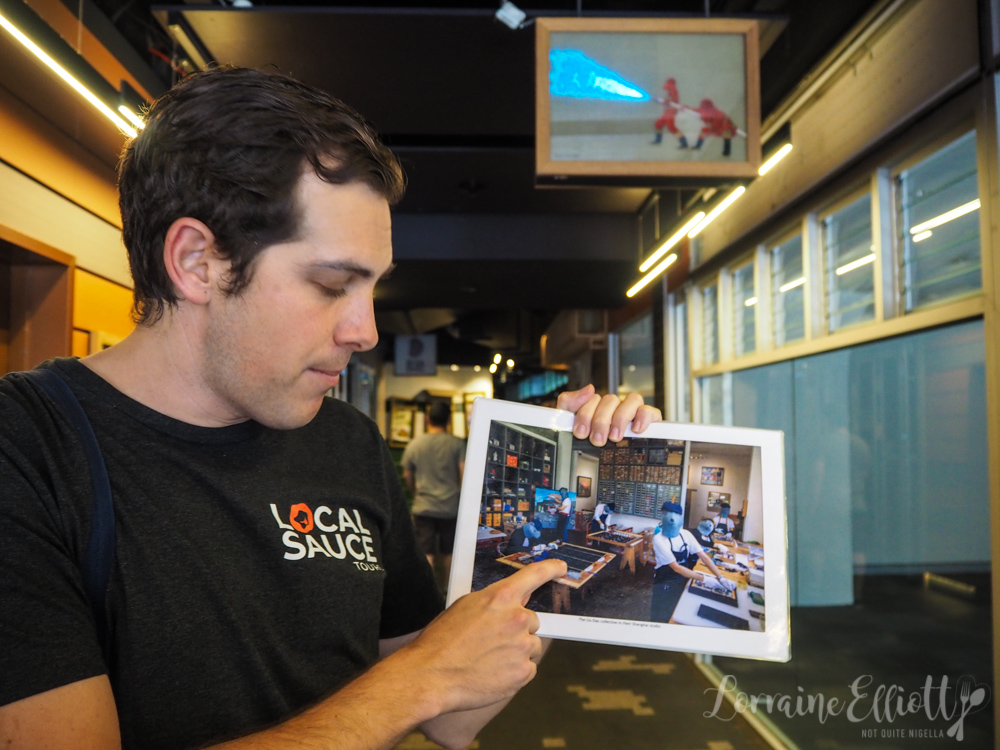 The art fuses electronic digital technology with static paintings and some of the art is interactive including a picture of a tree that responds to sound. When you clap your hands next to it, tiny birds fly away. Curiously while each piece of art starts at a few thousand dollars (Justin guestimates the interactive one at well over $25,000) there's nothing pointing you to this art installation at all and I suspect most people would pass by it without even noticing (like we did). 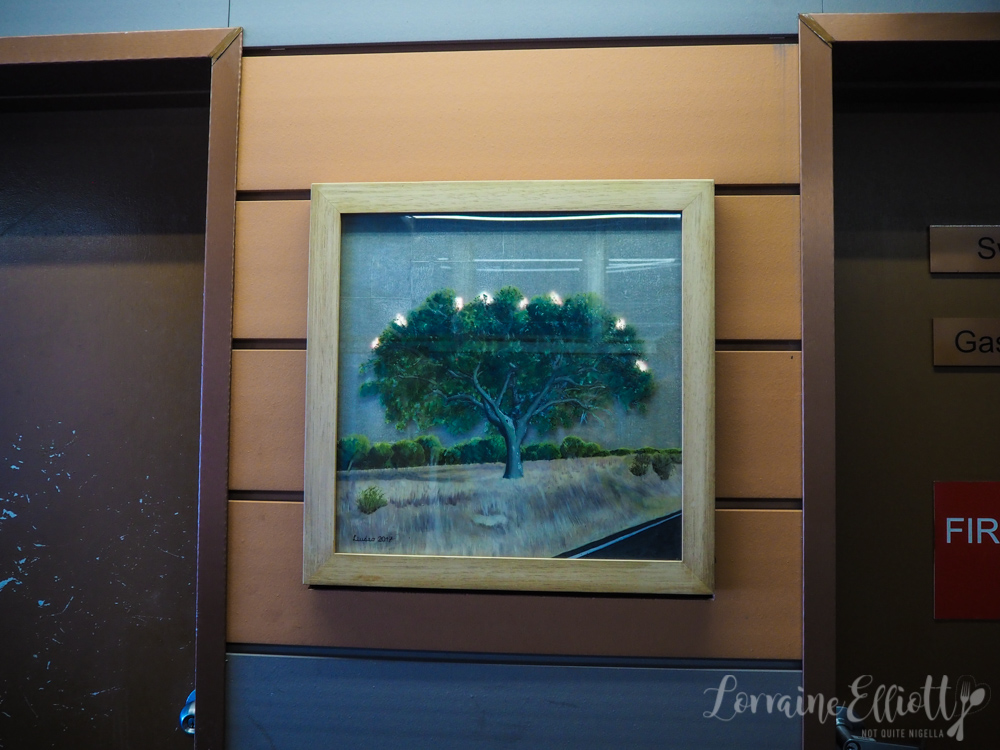 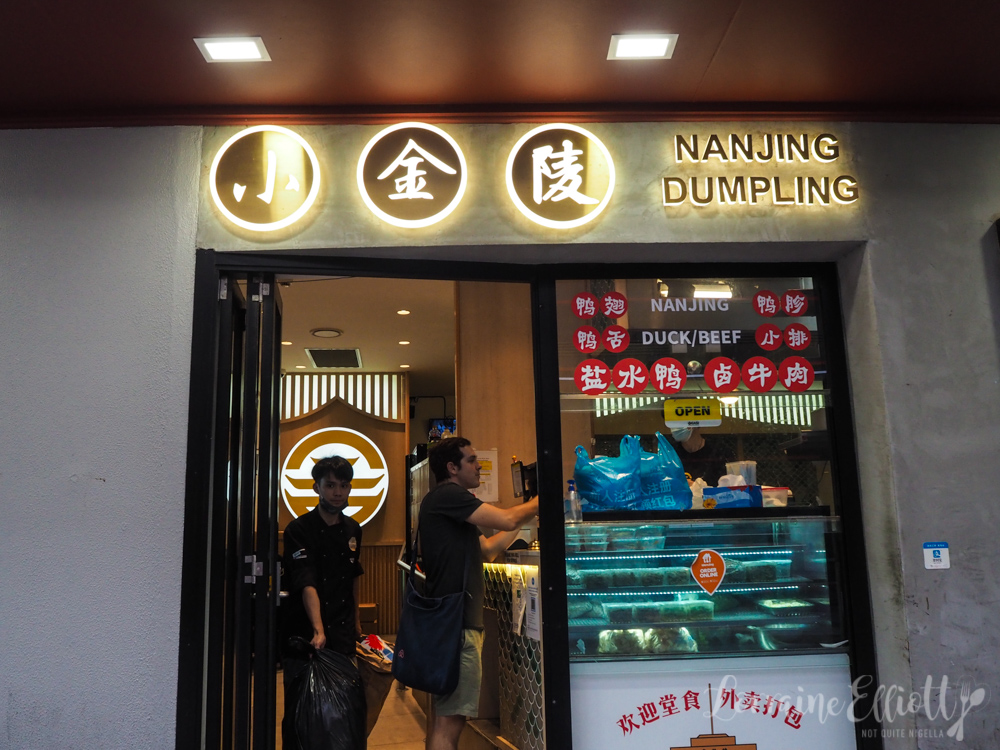 Our next stop is just a short walk away at Nanjing Dumpling. Monica and I had both been here in March 2021 and really enjoyed the food. Justin explains that Jiangsu cuisine uses soup to enhance flavours and case in point is their Xiao Long Bao made with crab and pork. He also explains how to eat them. They're absolutely delicious and have so much flavour for them and are slightly larger than other Xiao Long Baos. 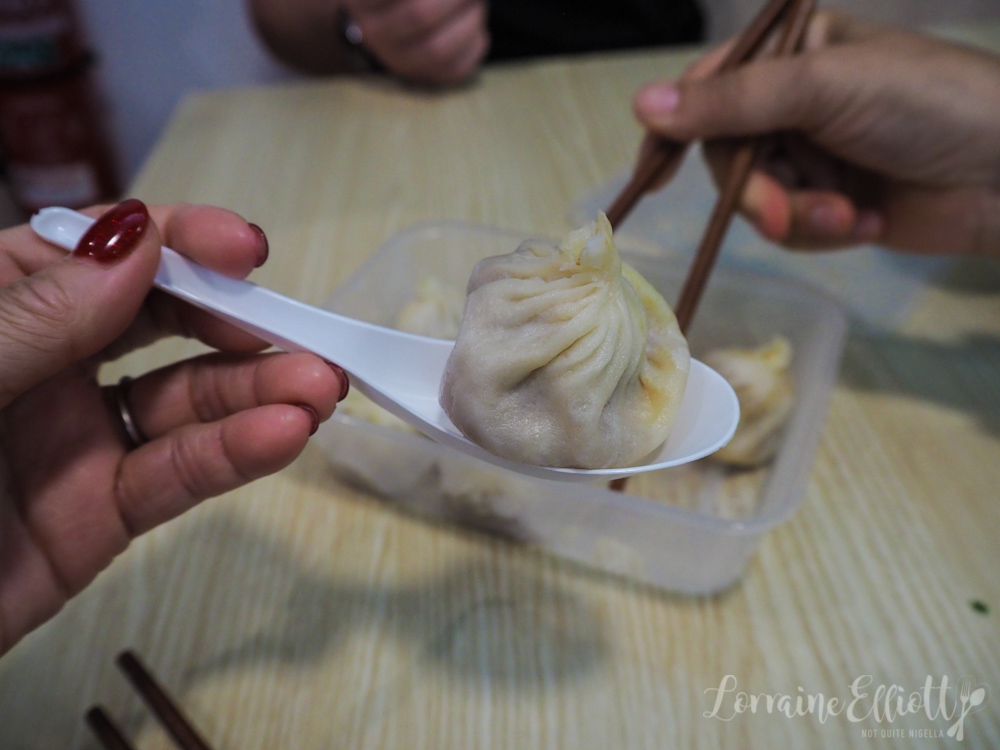 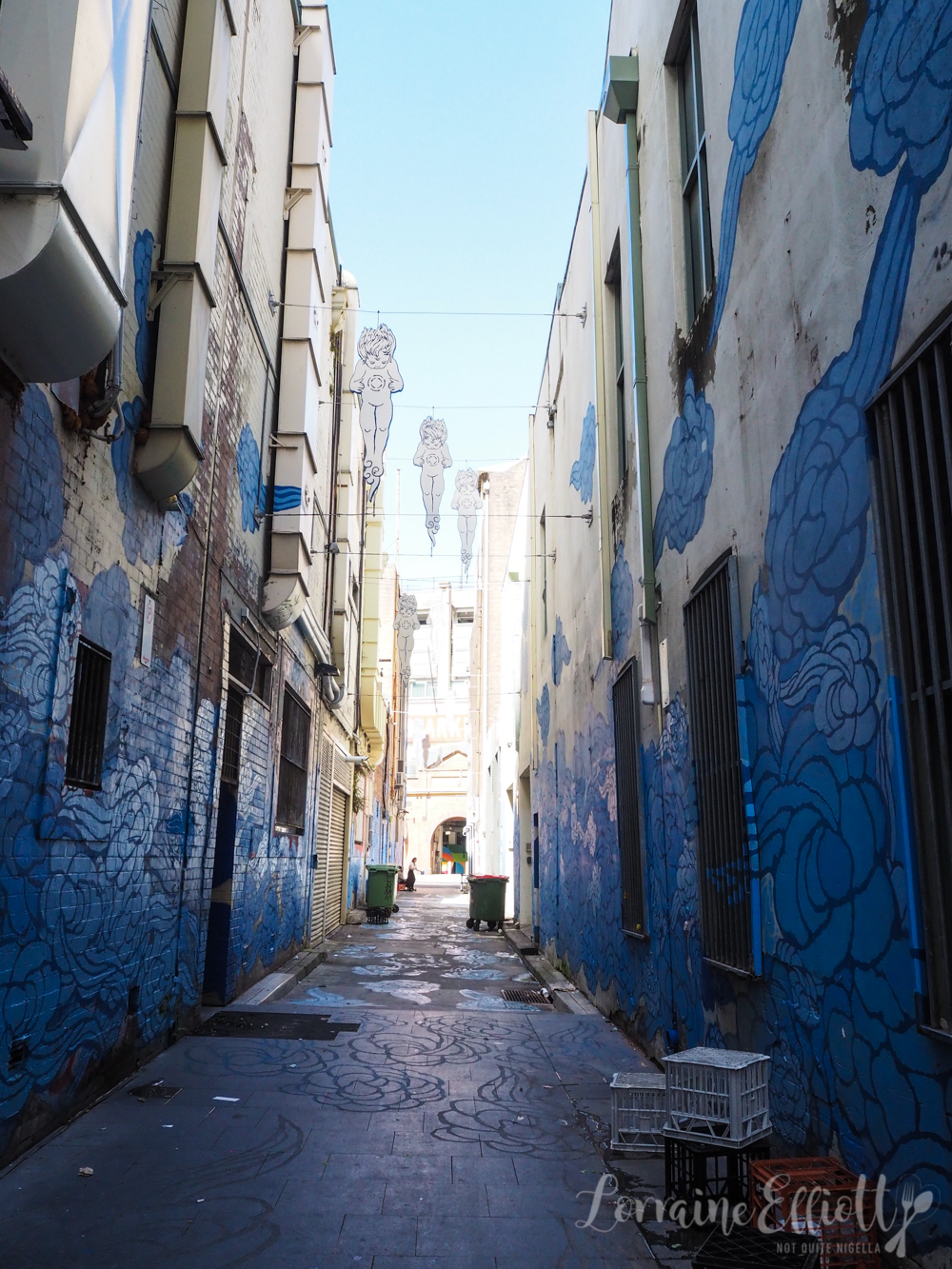 We stop by the "In Between Two Worlds" art installation that is a favourite alleyway with Instagrammers. He explains that the artist Jason Wing is part Chinese and part indigenous Australian and he had a tough time convincing the Chinatown officials to let him use blue and white over red and gold which are more traditional Chinese colours. His art work incorporates his indigenous heritage with spirits or angels and comprises of painted walls, suspended spirits and patterns on the ground. 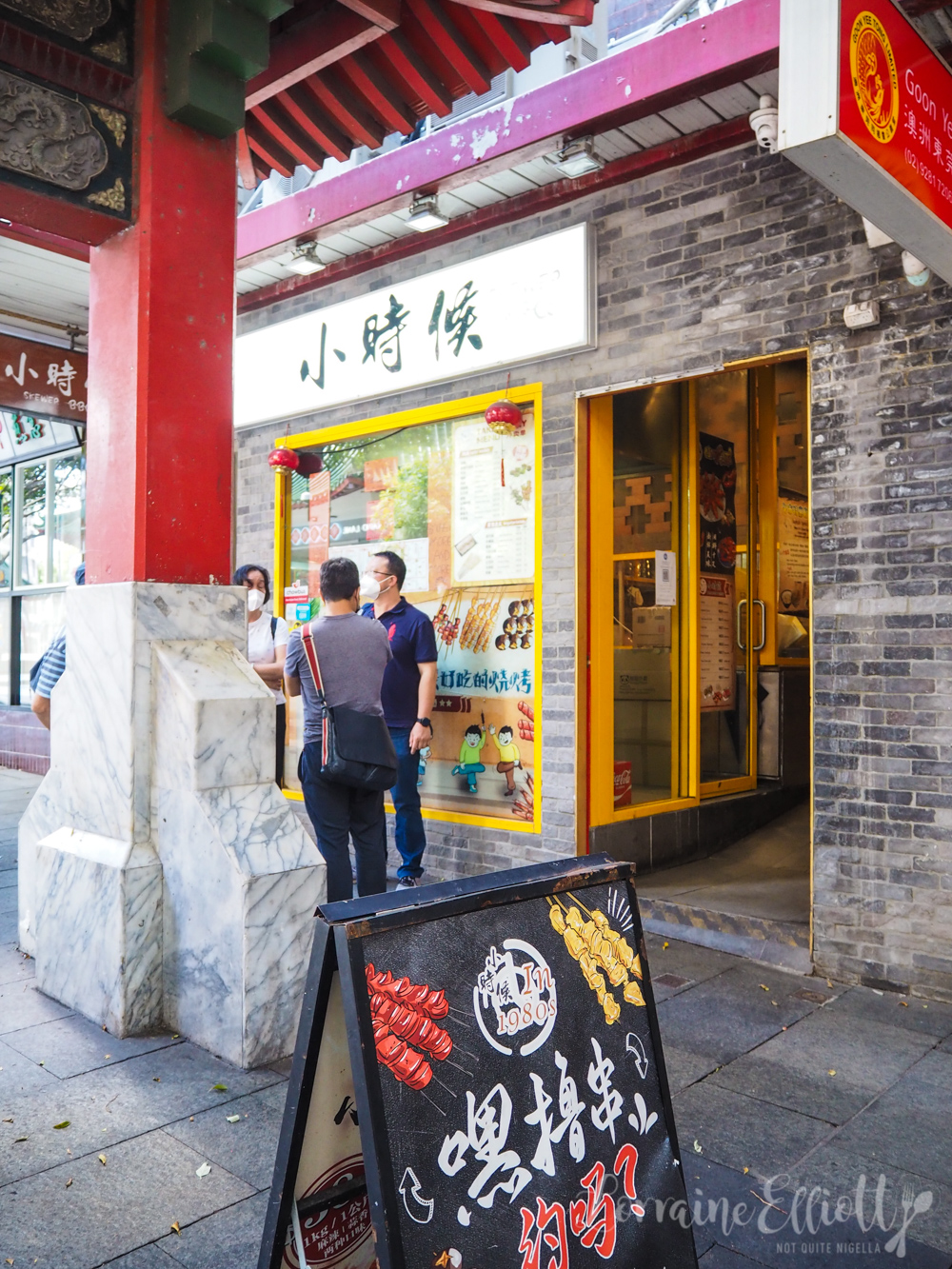 We head back onto Dixon Street for our next food stop. "In 1980s Skewer BBQ" sell Yang Rou Chuan lamb skewers which are a specialty from Xinjiang. On weekdays they open at 4pm but on weekends they open earlier and stay open until around 2am as Yang Rou Chuan are a late night food. I absolutely love these skewers and these ones are thinner and still juicy with plenty of cumin and chilli. Justin selects the medium chilli spice which is still satisfyingly tingly. We buy some bubble teas nearby and savour the skewers. 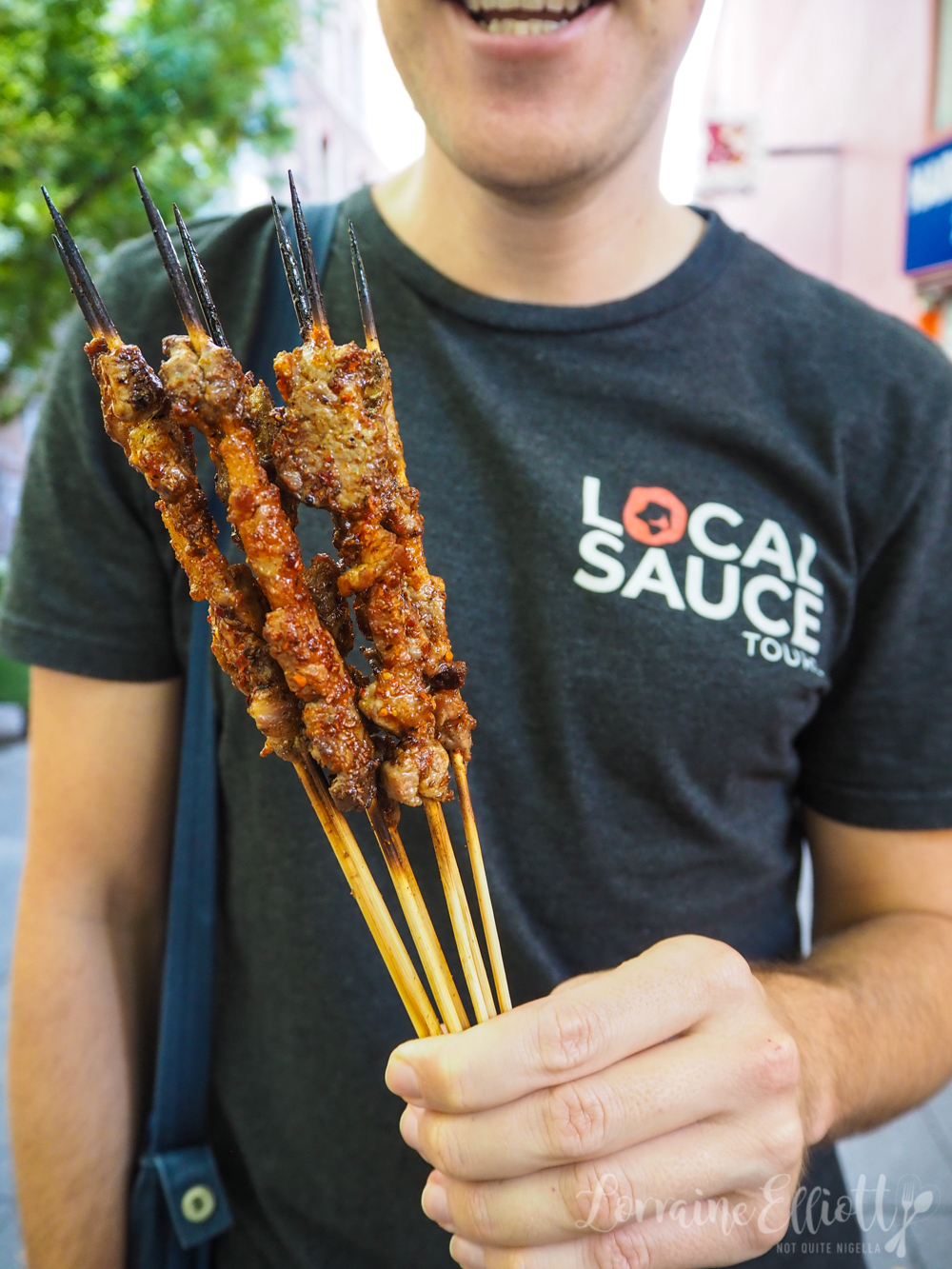 While we eat the lamb Justin tells us of the White Australia policy and how it was biased against non English speakers and shows us an example of a dictation test. Monica and I both love the educational aspect of these tours and how honest they are as there isn't any whitewashing of history. He shows us a picture of Jane Mary Low Choy, a Queensland born third generation Chinese Australian woman who became part of the "Aussie" series by South Australian artist Peter Drew (you may have seen his images of Monga Khan). When Jane Mary wanted to leave Australia to go overseas she had to obtain an exemption certificate so she didn't have to sit a dictation test every time she came back in because she had a Chinese background. 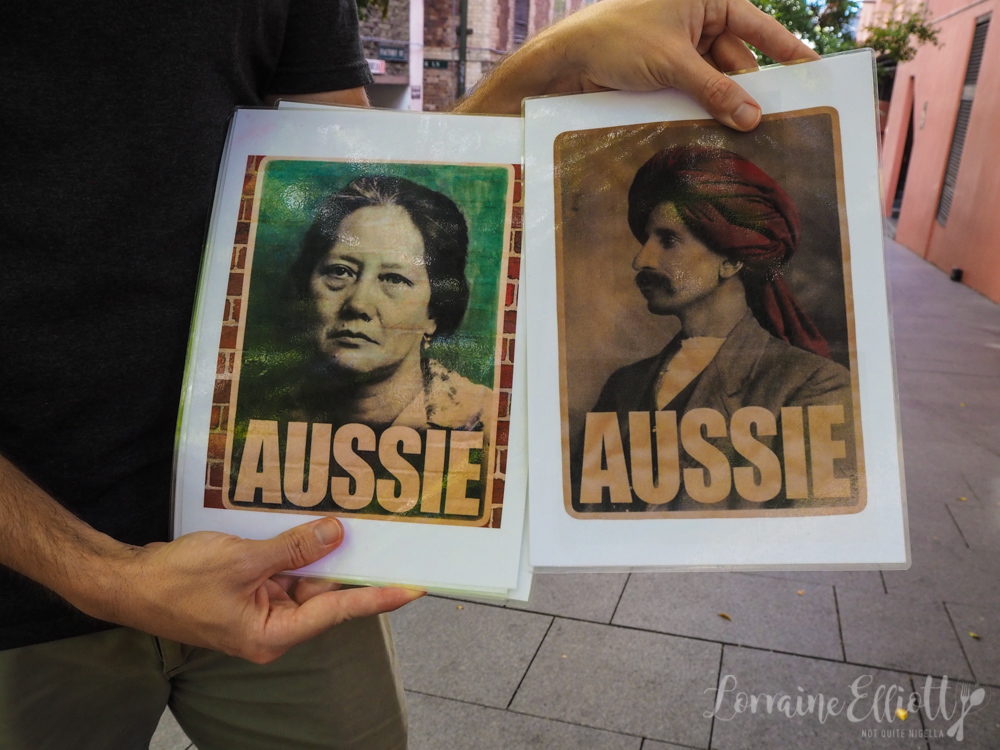 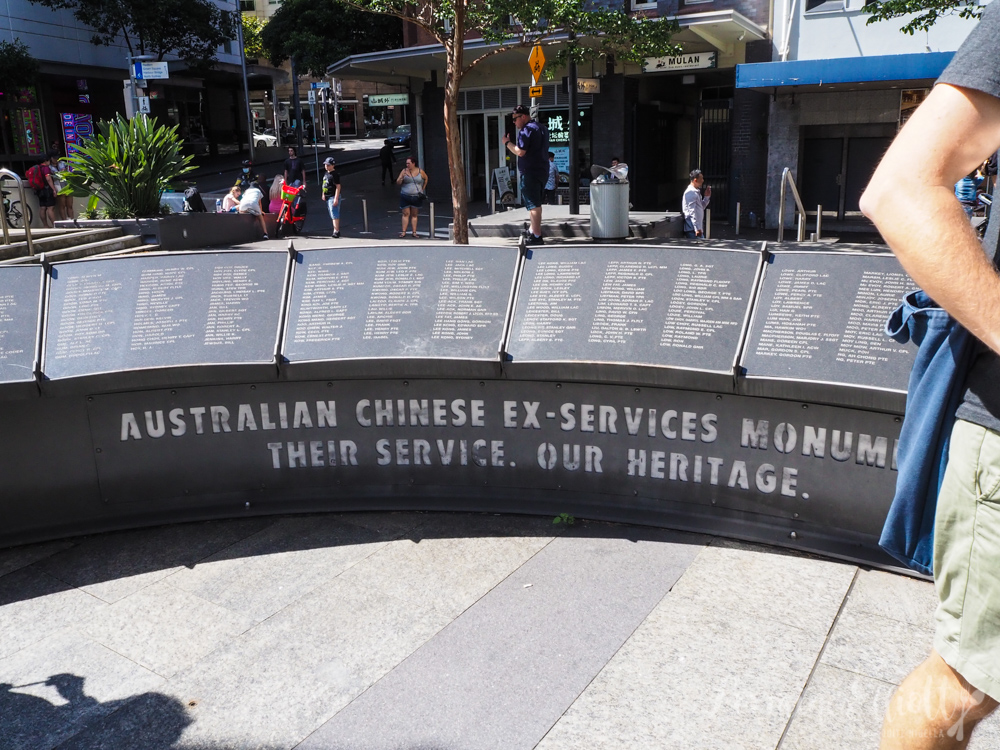 We also stop at the only war memorial dedicated to Chinese Australians that fought in the war including soldier Billy Sing. He is said to be Australia's most successful sniper who fought in Gallipoli and sadly died destitute in his 50's and was buried in a pauper's grave. Chinese Australians were prevented from serving for their country by vague laws such as soldiers had to be "Substantially European" and interestingly many of the names on the memorial were anglicised names like Young. Fast forward to present day when he shows us major general Daryl Low Choy the first Chinese Australian to achieve that status. And his grandmother? Jane Mary Low Choy. 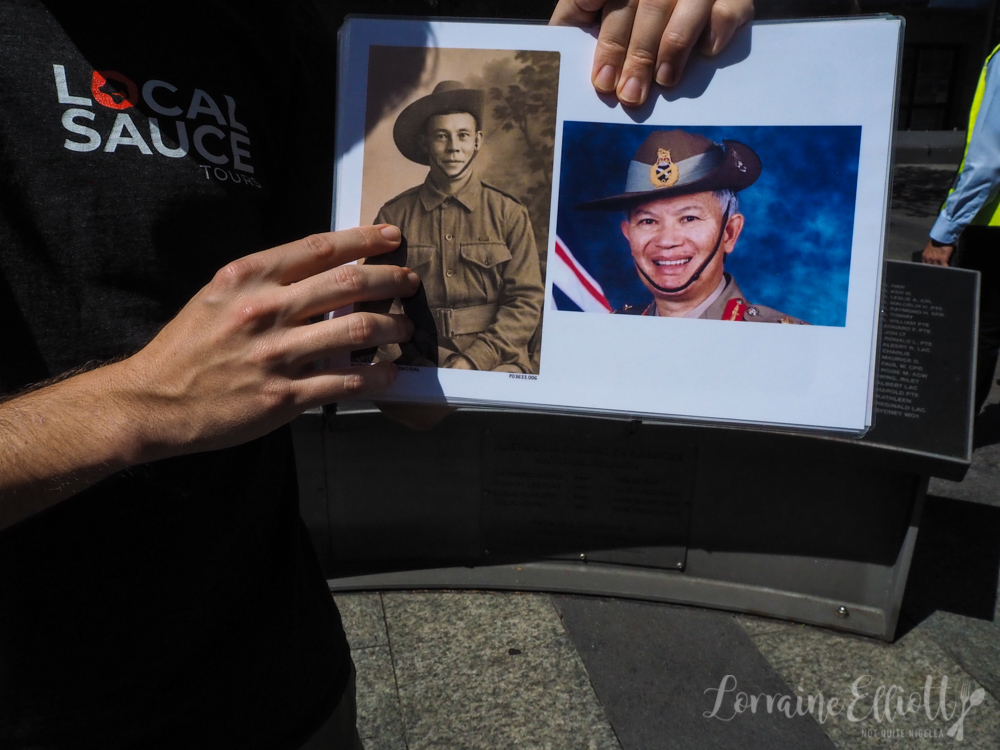 We have a quick game stop at Darling Square where he shows us a range of famous Chinese Australians. Truthfully I can only guess 5 of them and Justin explains everyone's history and their contribution to society, business or the arts. Then we head to our penultimate food stop Xi'an Cuisine where Monica and I had just eaten a few days prior. Xi'an cuisine is run by Oscar Yan and his mother Annie who grew up in Liaoning China near the North Korean border. 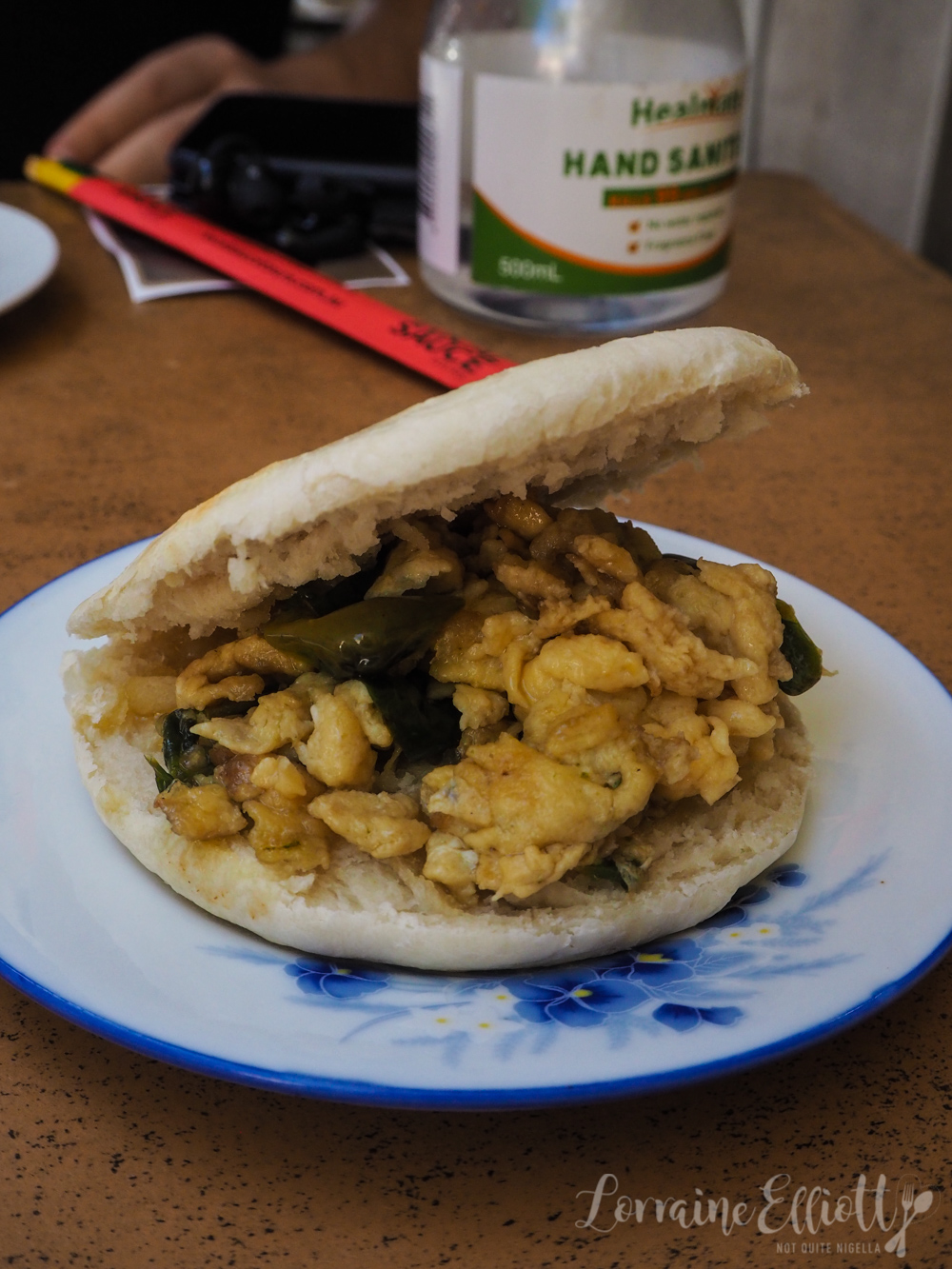 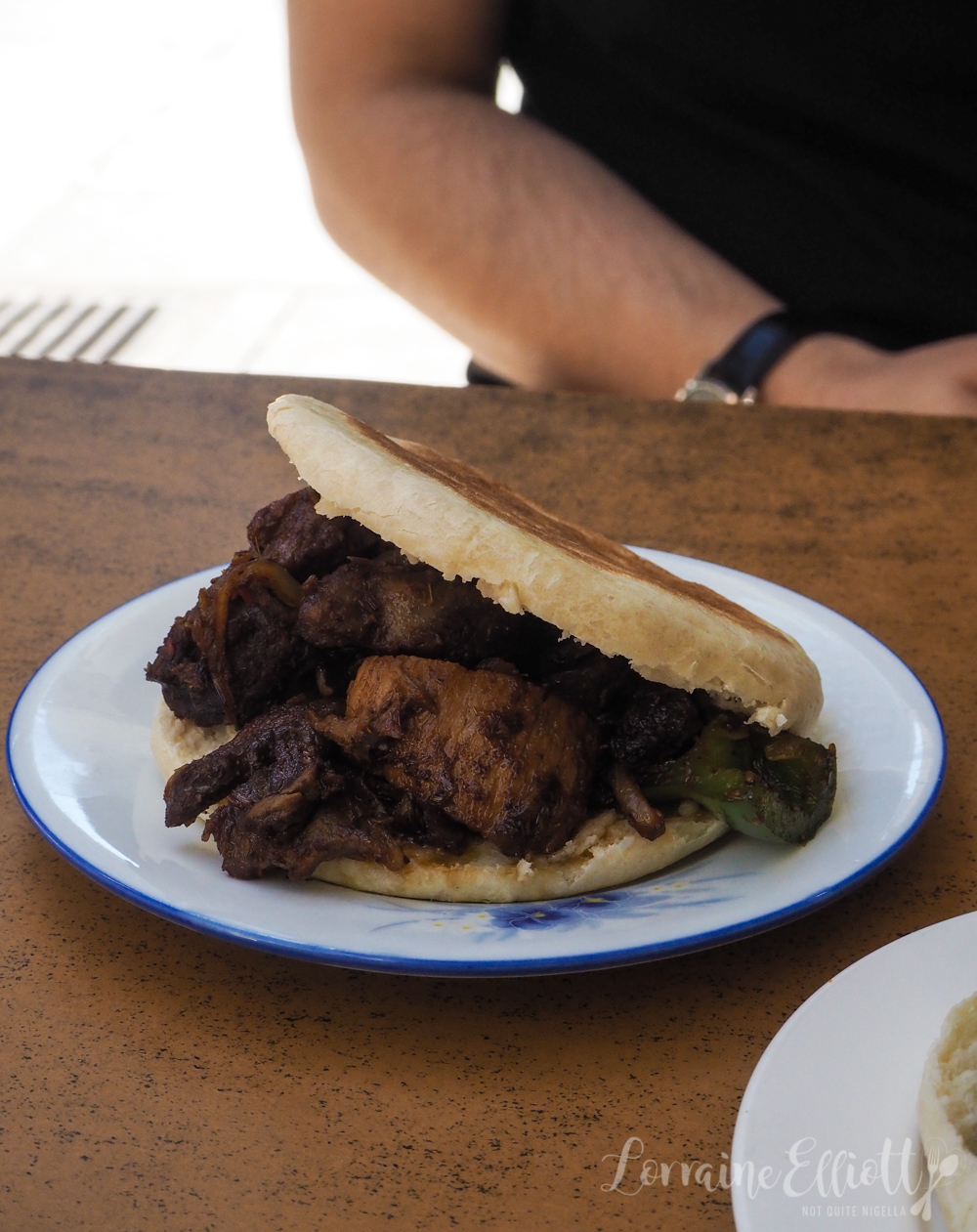 They specialise in home style cuisine here or "jiachang cai" which translates to "home often food" or "daily life food". We are here to try a Xi'an speciality, the filled pita breads or Roujiamo. Usually tour guests try the pork one but Monica and I already had that so we try the egg one and the lamb one. Both are absolutely delicious with so much flavour and so distinct from another while Sam, another tour participant gets the beef one on our urging. 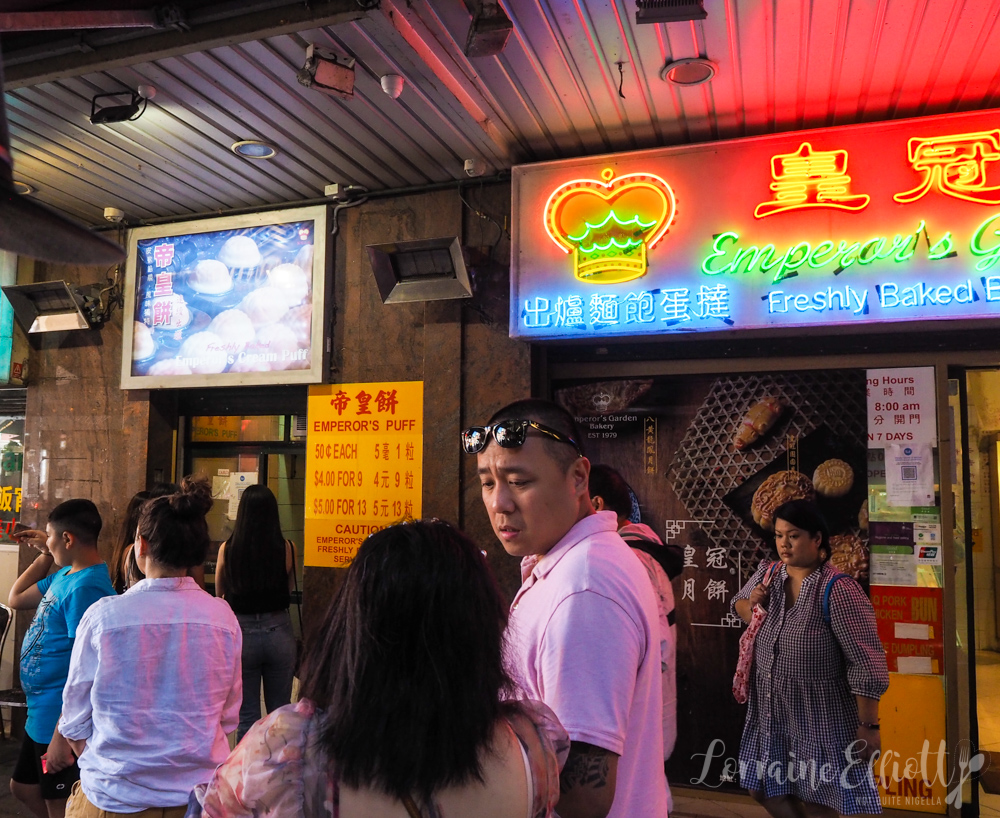 It's time for our very last stop and it's a sweet one at Emperor's Garden where Justin joins the long queue and procures a bag of piping hot egg custard puffs. These egg custard puffs are incredibly popular and a tasty, inexpensive snack to eat while walking. He also hands us a Bingo card with other eateries and their signature dishes that we can try at a later date. And that's the end of the tour under the Chinatown gates just near where we started where the sign reads, "Within the four seas all men are brothers." 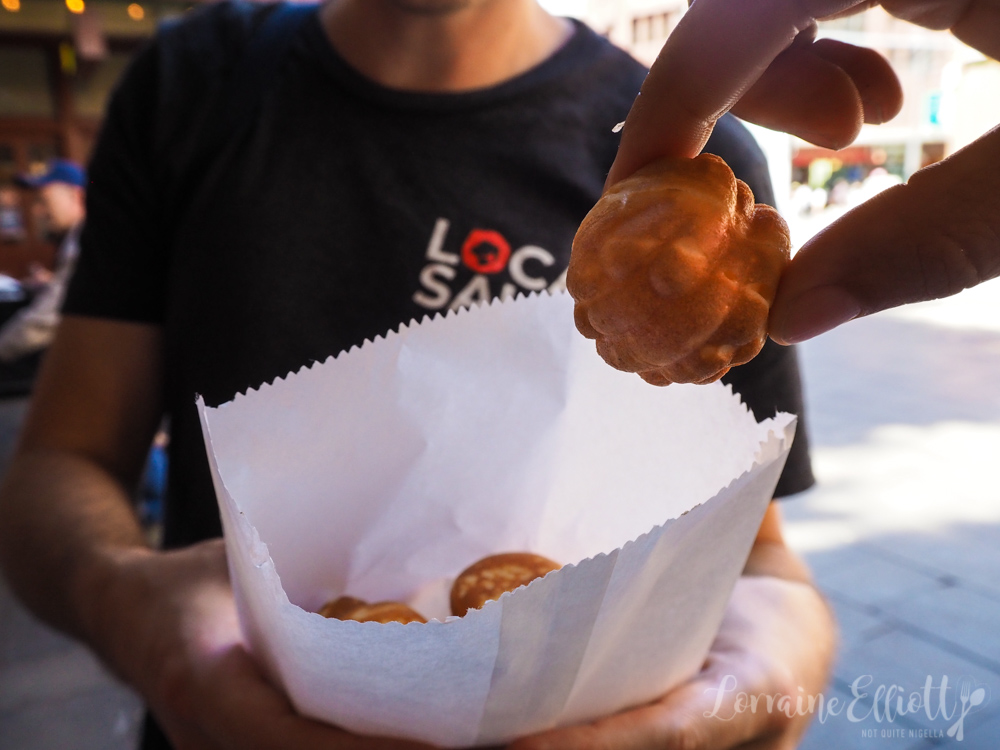 So tell me Dear Reader, have you been to any of these restaurants? Do you like food and historical/cultural tours?

NQN and Monica were guests of Local Sauce Food Tours but all opinions remain her own.