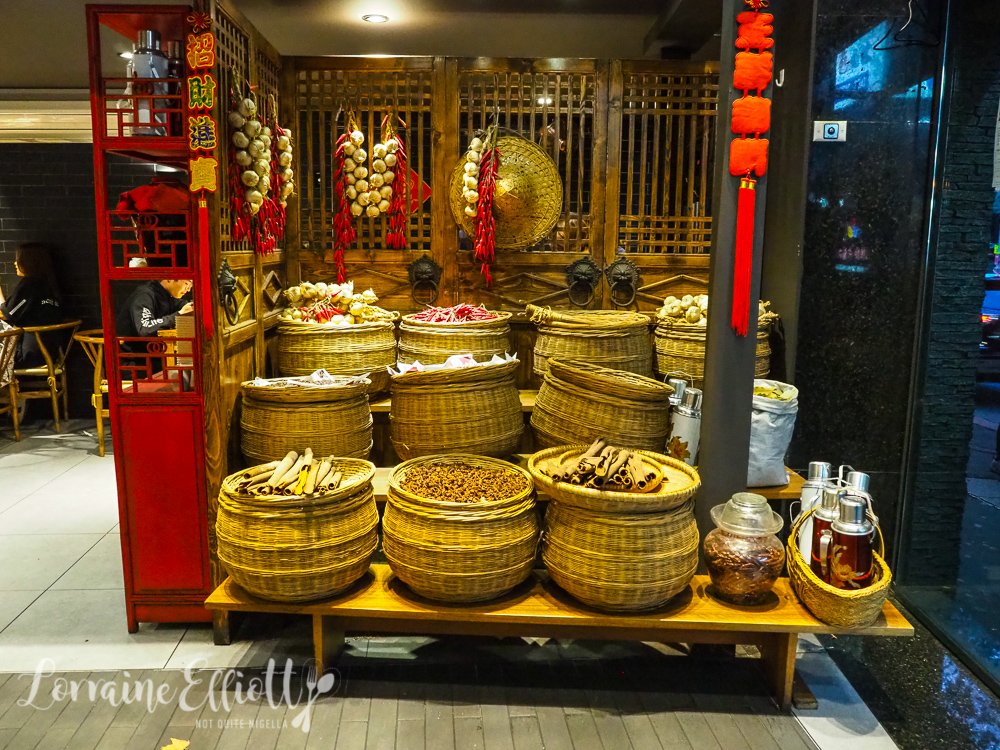 One night Ivy, JY and I made our way around the corner to Little Hunan. Specialising in Hunanese cuisine it is full of spicy options with Hunanese specialties like smoked pork and chilli paste. 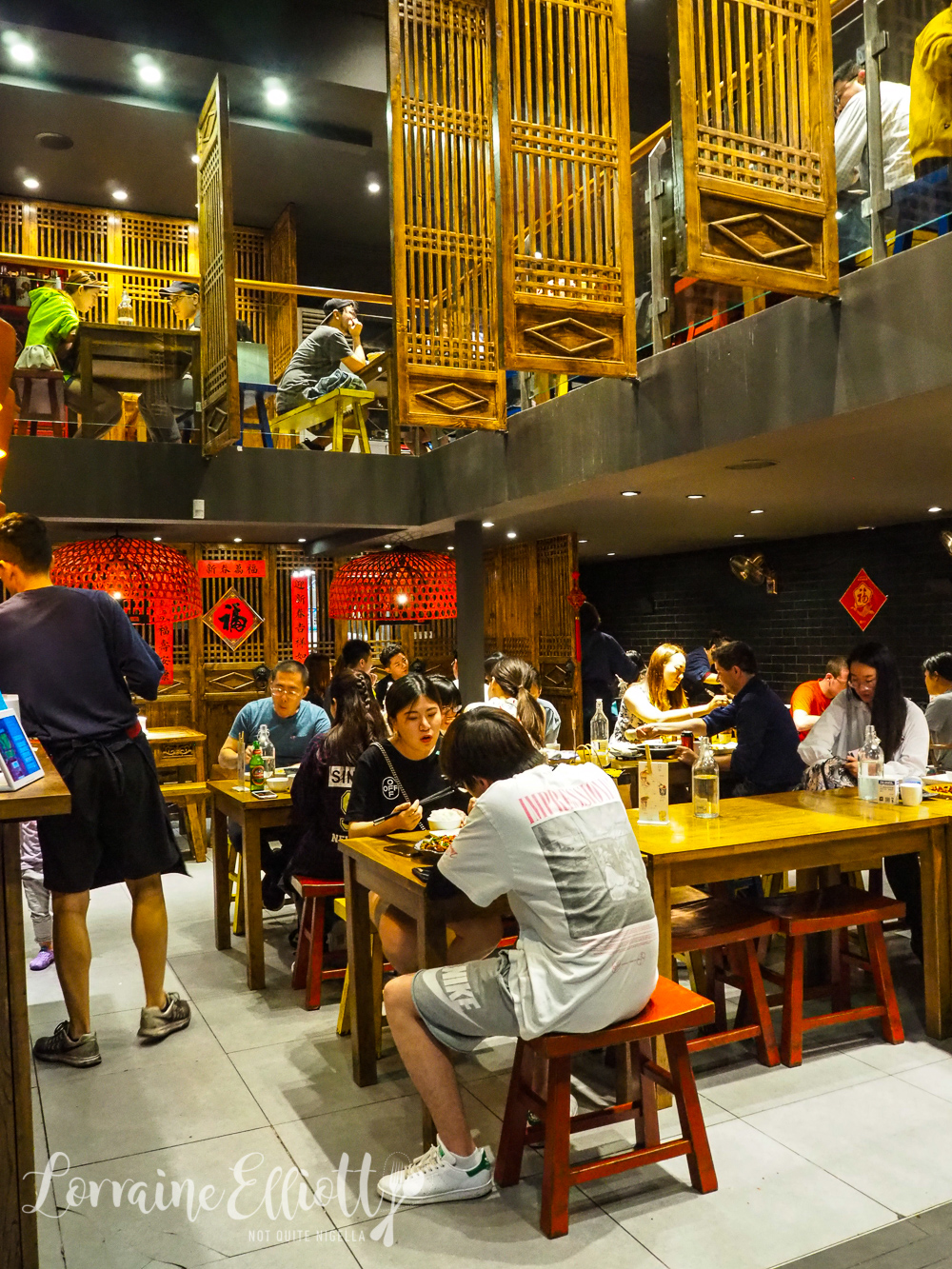 I have friends with so many preferences and intolerances and allergies that it's sometimes hard to keep a track of things. I knew that JY was allergic to peanuts but she also doesn't like spicy food. And it's totally my fault that we ended up here at Little Hunan. 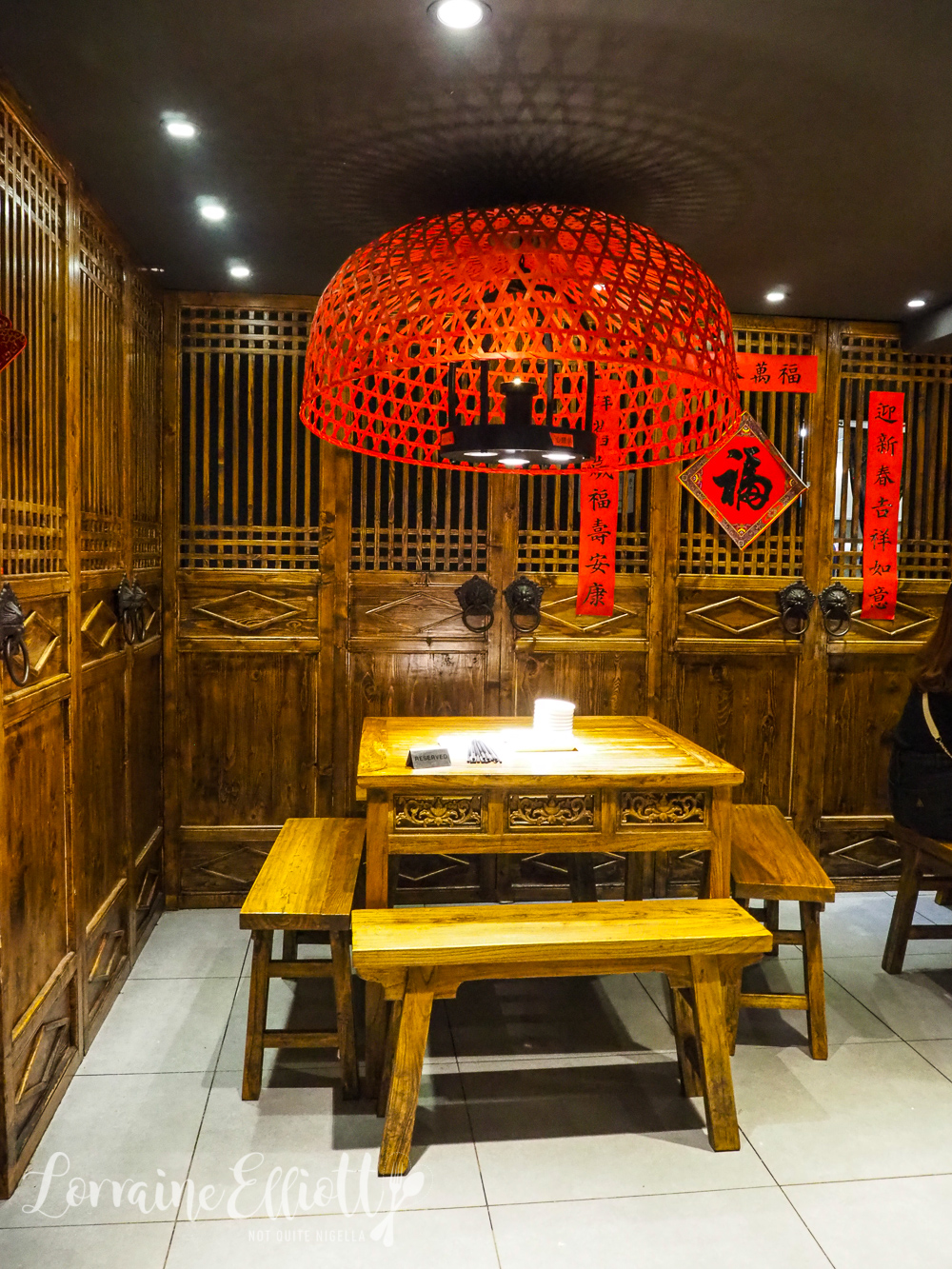 There are two menus. A paper menu where you circle what you want and there's also a regular book menu with big pictures that detail the food too. We flip through it looking for the food with no chillies or 1 chilli. Reviews online talk about the poor service but service from everyone is friendly and polite. When we ask about what is good to order they show us. 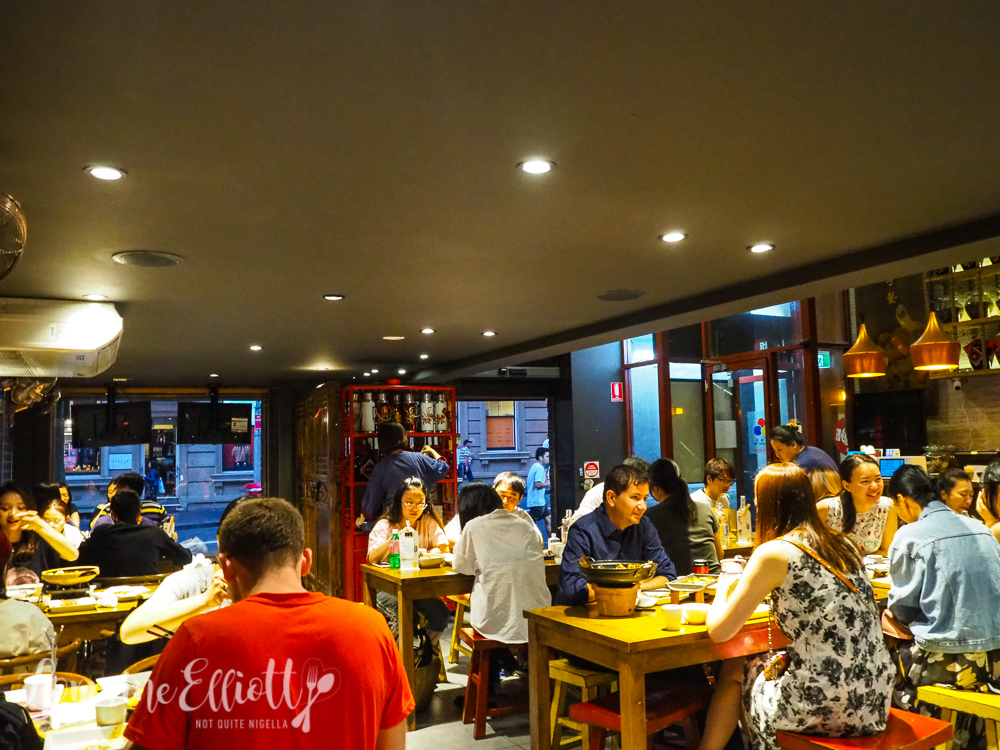 There are some foods that are very Hunanese. Black bean sauce is one but unfortunately the pork trotter that we had circled isn't available so we replace it with another Hunan special with smoked pork. 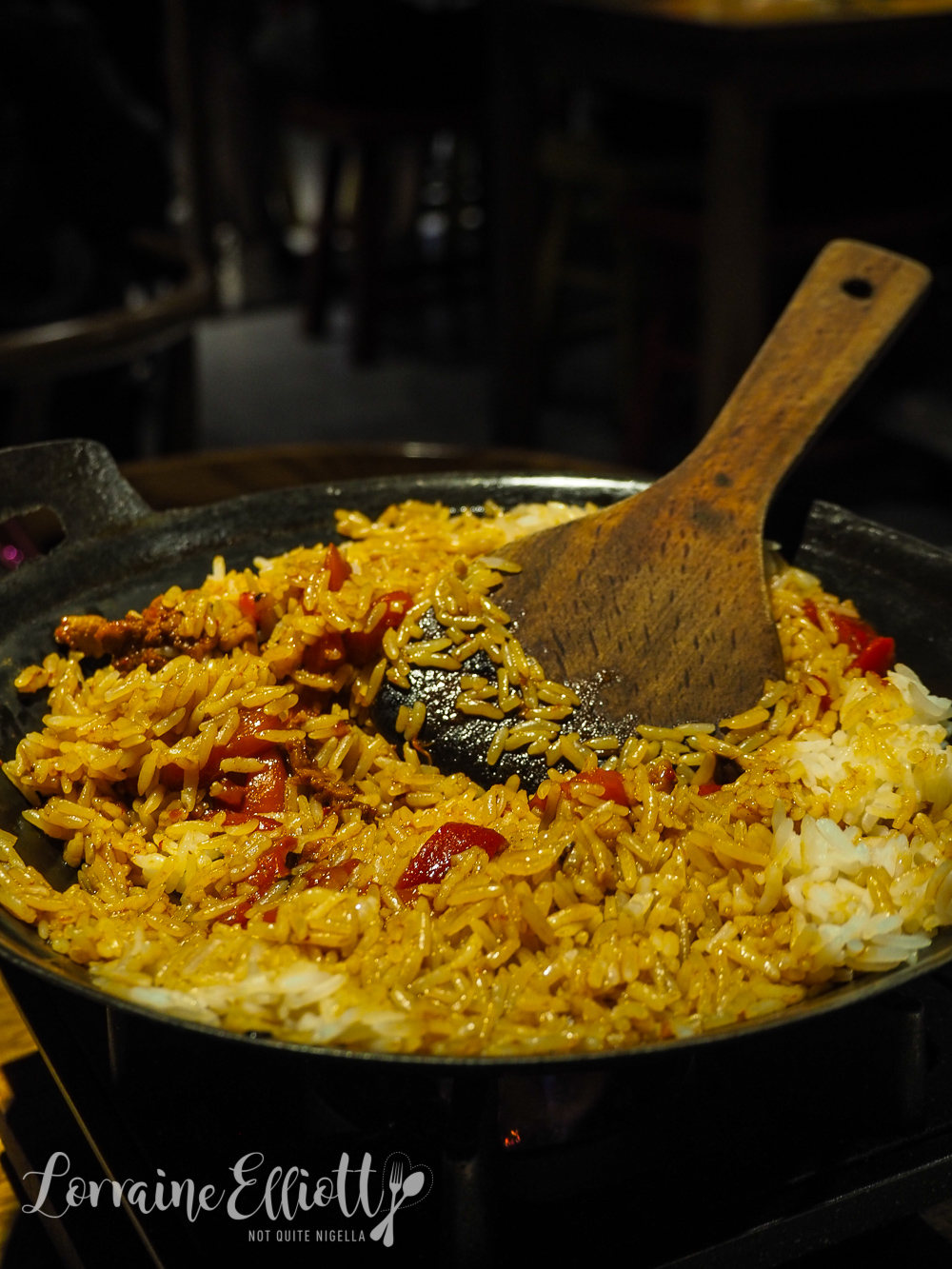 The food hits the table at an alarming speed. In fact the drinks that we ordered (that come from a different shop) arrive last. The first item is a sizzling pork fried rice with roasted red peppers cooked at the table. When they say cooked at the table that's probably over stating it and it's a rather brief affair with no theatrics. Someone brings a hot pot of rice and stirs its a bit and then disappears. If you're lucky you'll get a piece of the pork but these are as rarely spotted as a yeti. 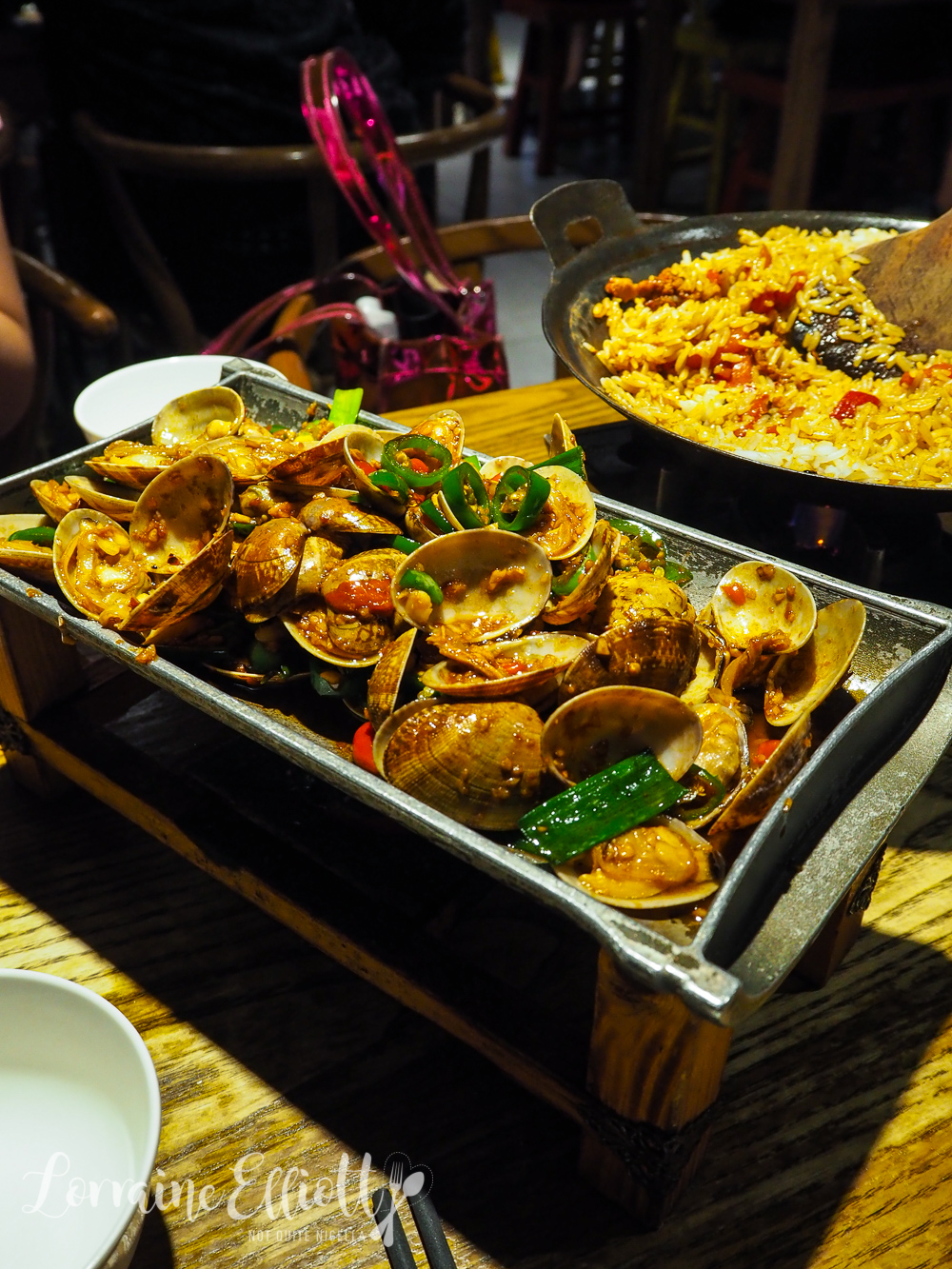 The sizzling clams come out in a rectangular metal and wooden tray and have a good amount of clams that don't hold back on the garlic. Even a garlic lover like me might find the garlic almost too much on these. 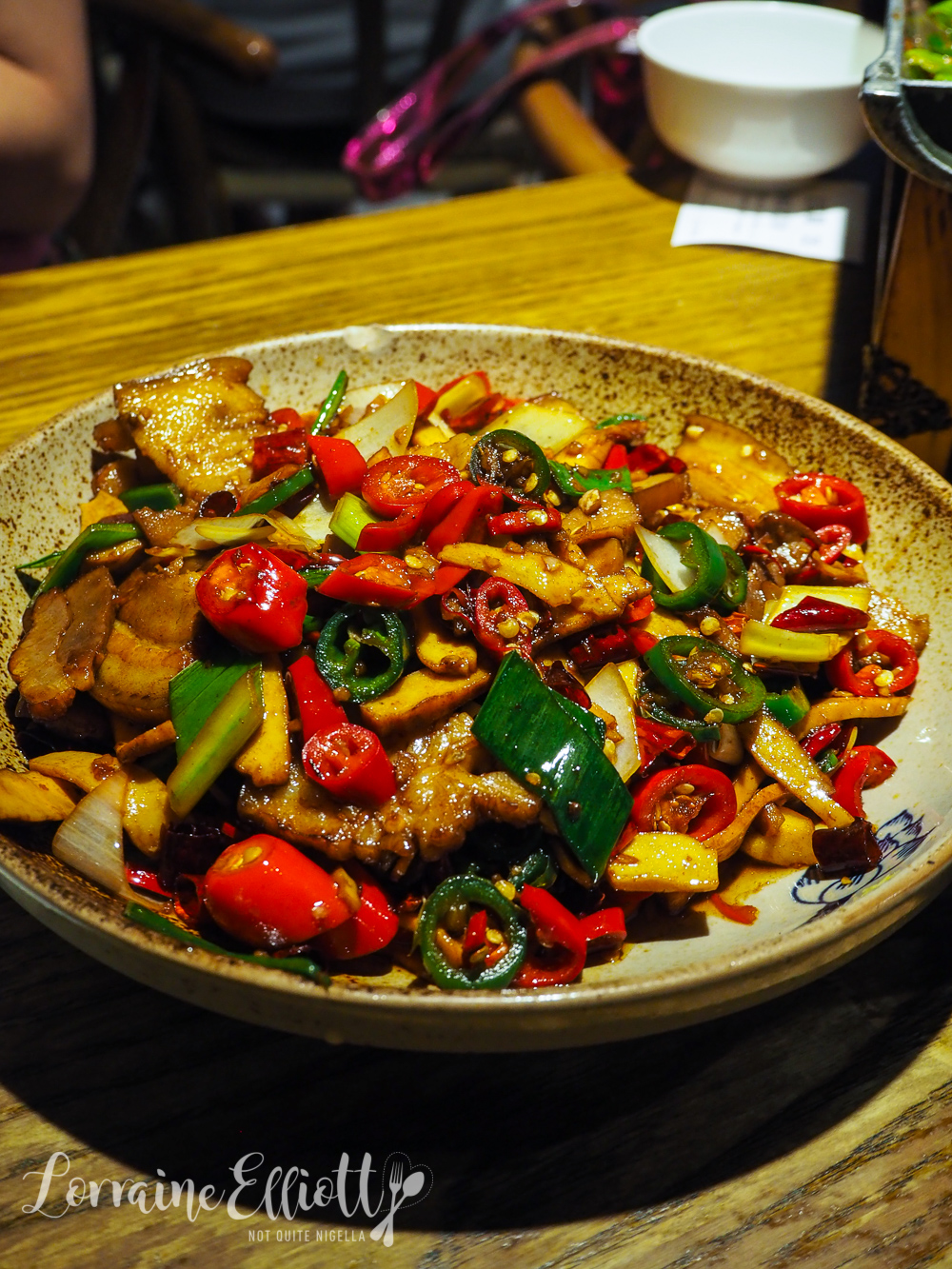 All three of us love pork so we replaced the pork trotter with the smoked pork but this dish is a bit confusing. It's thinly sliced smoked pork belly which you might think to mean something like bacon. It's sliced like bacon but this Hunanese specialty is very, very smoky, a bit too smoky for me and there are slices of firm tofu too and a few pieces of pork belly. 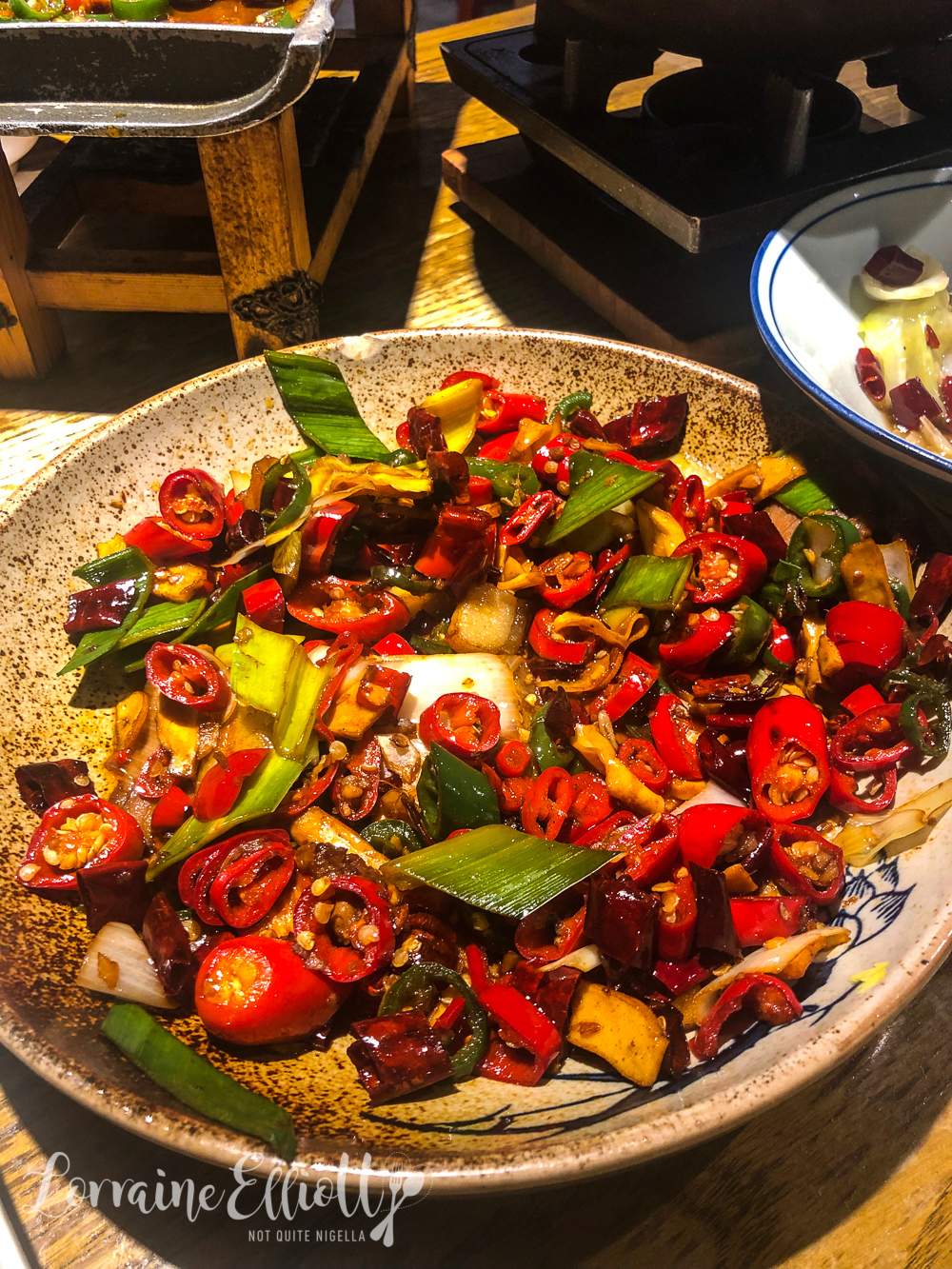 But as Ivy points out you do end up leaving most of the dish behind (see above). There are three types of chilli (red fresh, red dried and green fresh) along with some tofu and a little bit of smoked pork. In fact the dish when it first arrives looks very similar to when we finished it. 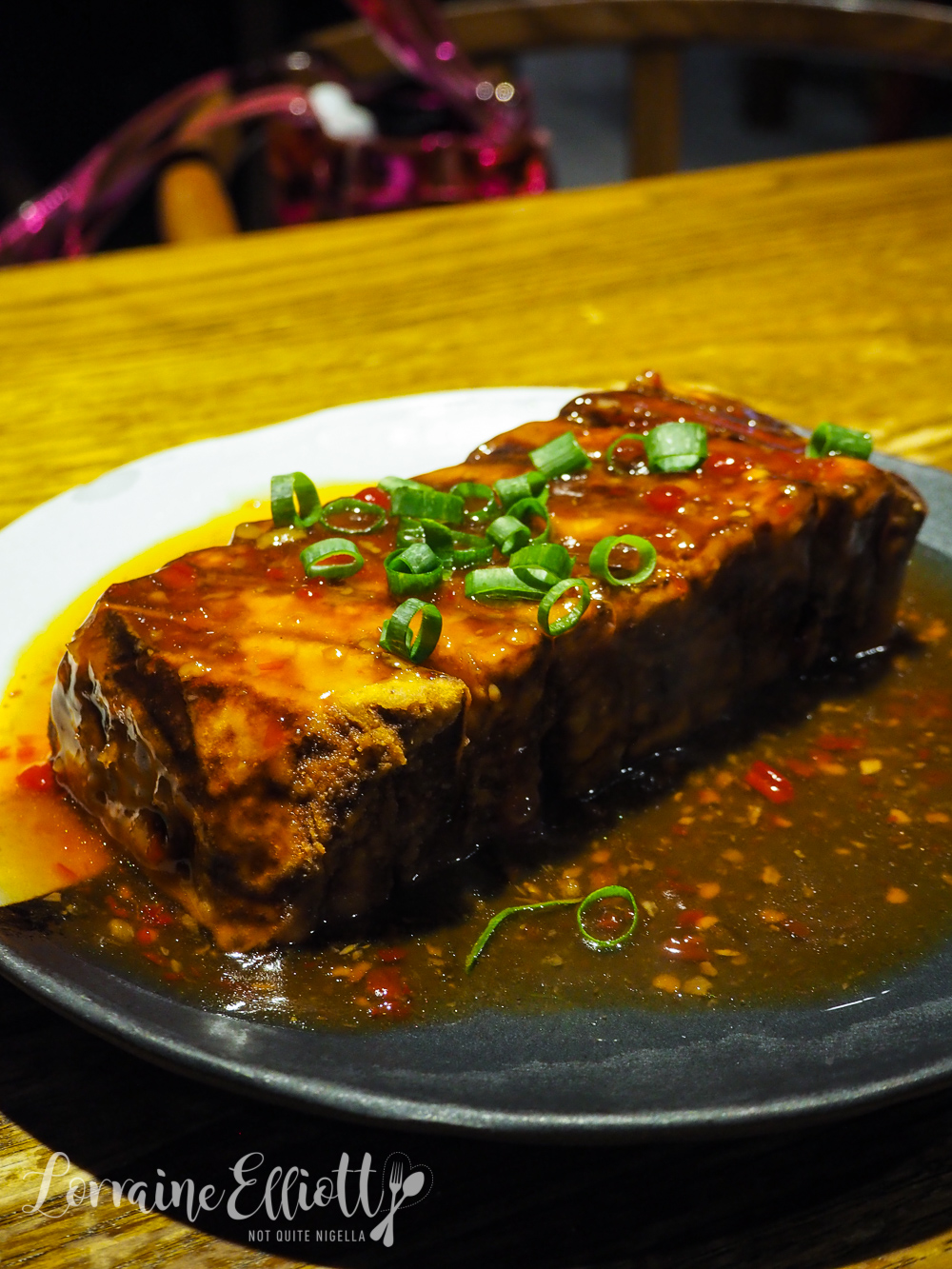 Ivy doesn't eat eggplant as she doesn't like the taste but JY and I adore the tempura eggplant dish which is both of our favourite of the night. It's crunchy from the tempura batter and blanketed in a rich, sticky plum and sweet chilli sauce. 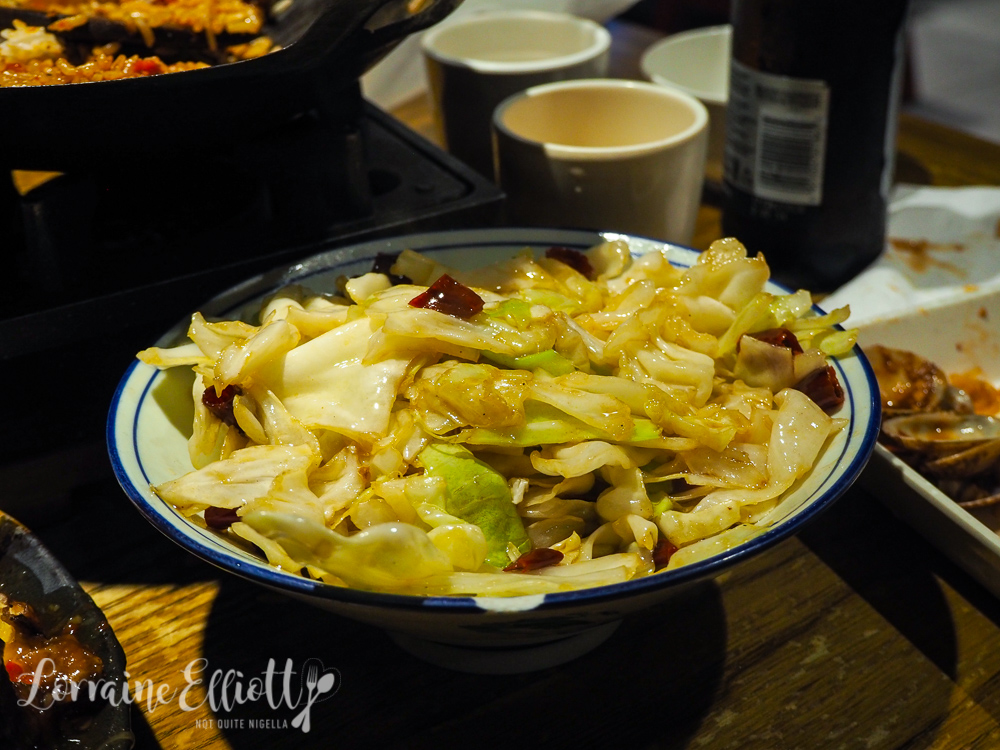 The vinaigrette stir fried cabbage was highly recommended and it is nice but I end up dipping this in the plum and sweet chilli sauce. It's quite oily but tasty. 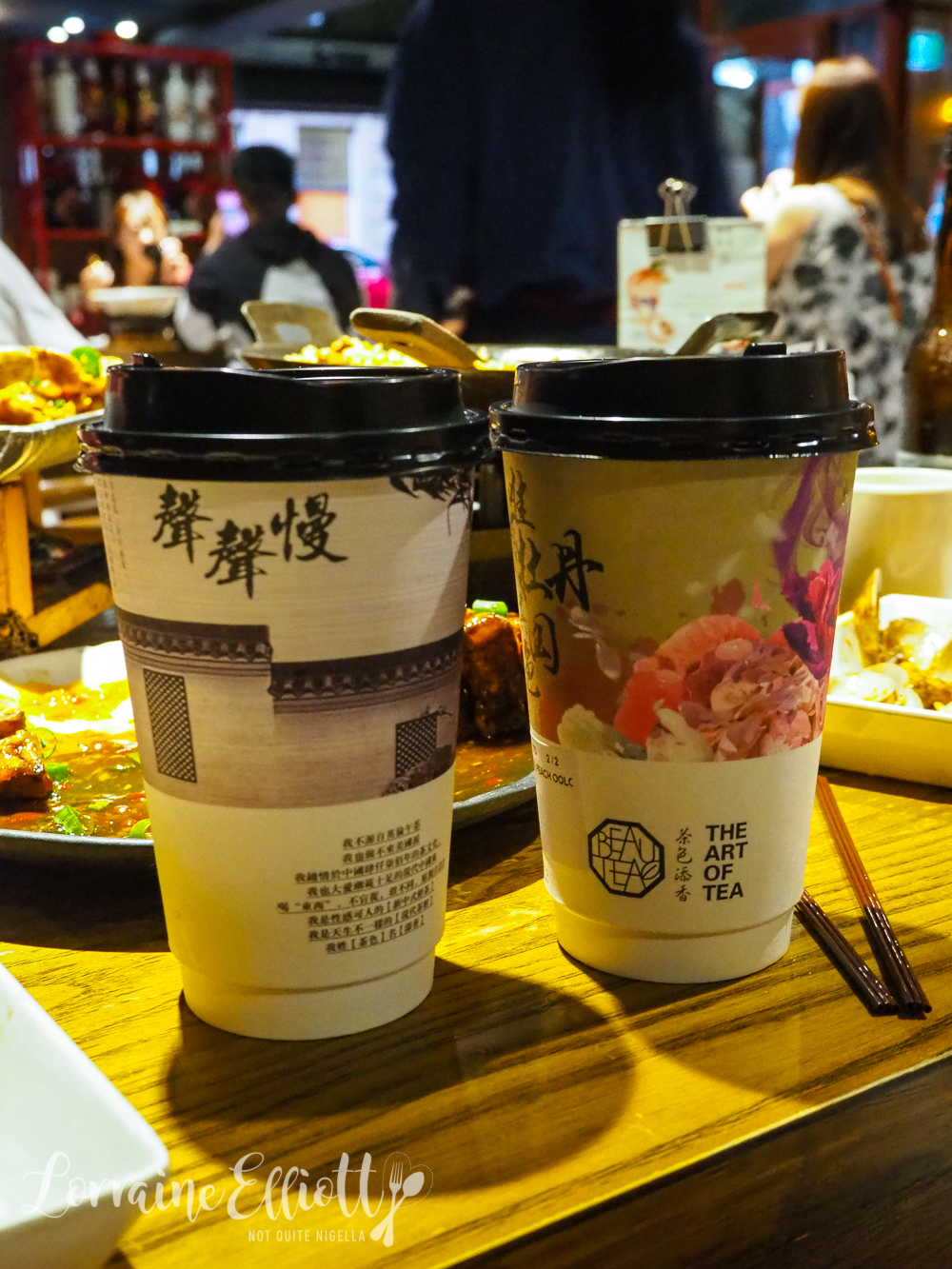 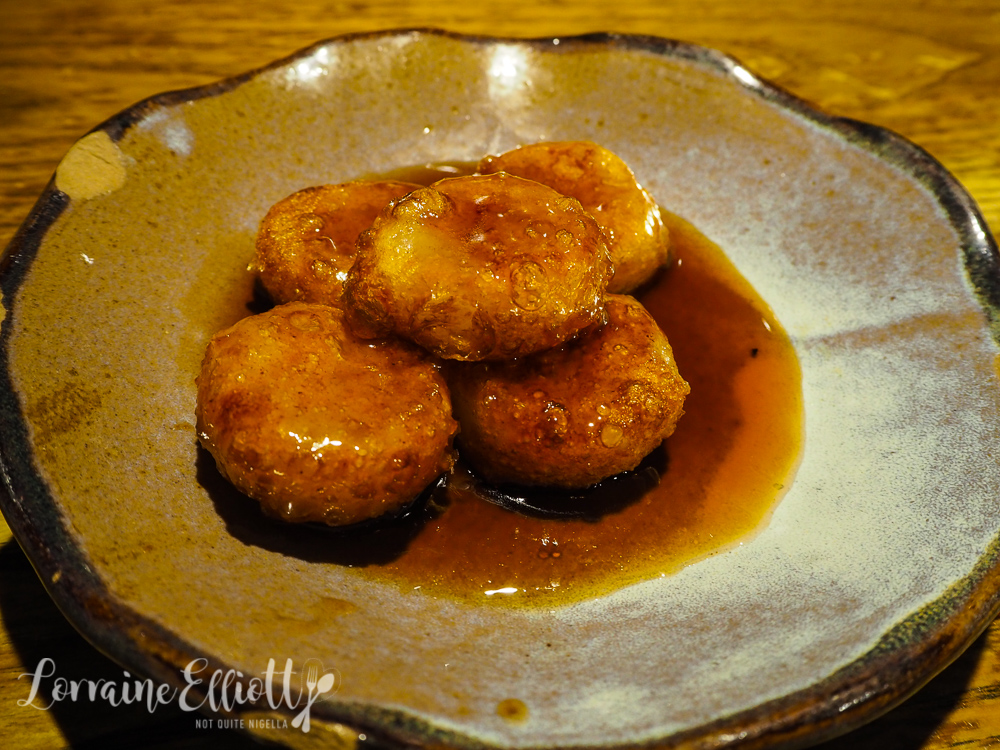 It's dessert time and we have eyes on the deep fried sticky rice cakes. They've got a lovely chewy texture and a slightly crispy outer and are drenched in a syrup.

So tell me Dear Reader, have you ever had a dish where you've left most of it behind but you're supposed to? Does it worry you if food arrives really quickly?