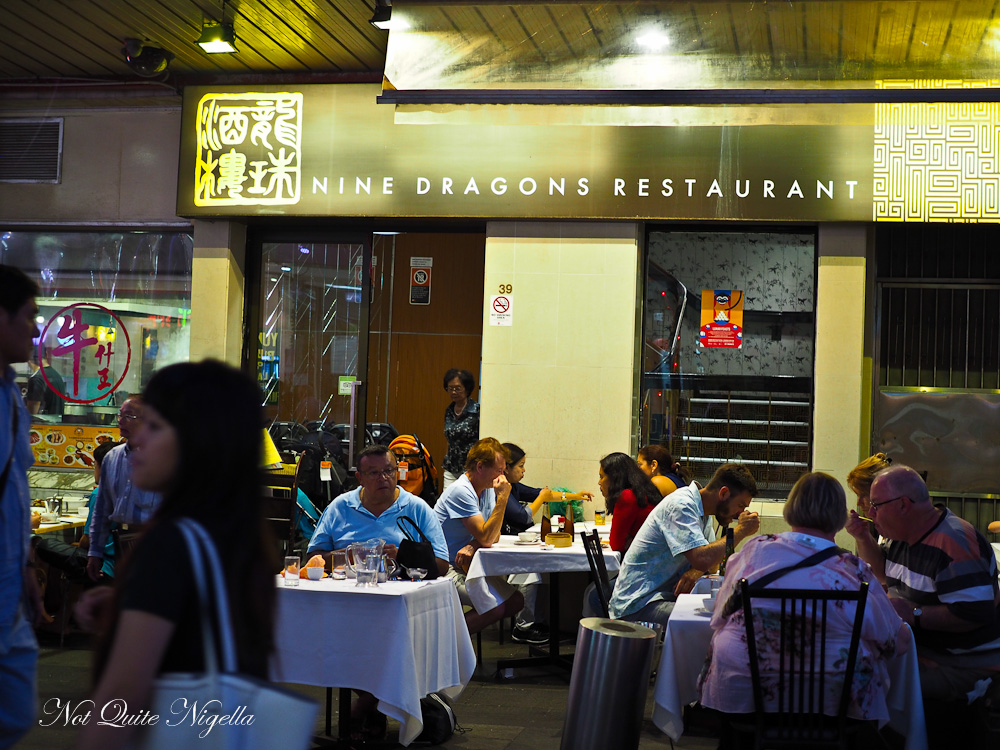 It's time again for Chinese New Year and this year is the Year of the Monkey. Chinese celebrate with food and the reunion dinner, prior to Chinese New Year is an important one. This year we decided to try a place right in the heart of Chinatown called Nine Dragons. Gong xi fa cai Dear Reader and I hope that this year is a great one for you! 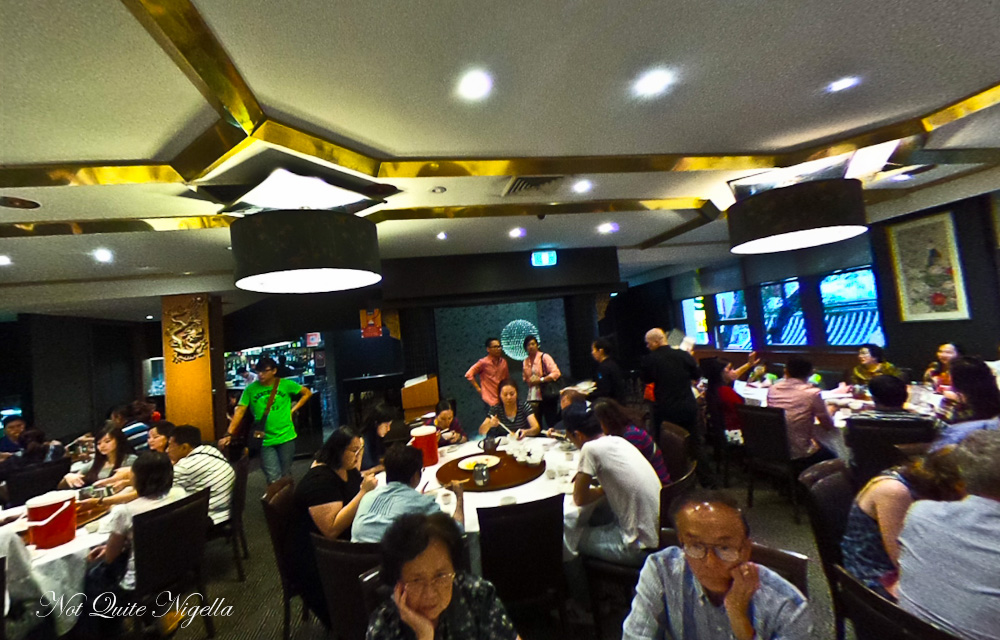 My dad, man of few words leans across the table. "I'll make you an offer. I'll paint one of your readers..." he says. You see we are at Nine Dragons on busy Dixon Street in Chinatown and we've been waiting for almost an hour for our food. And for my dad? He's gotten positively chatty in this time as our tummies growled while watching table after table that has sat down after us, furnished with plates of steaming hot Chinese food. 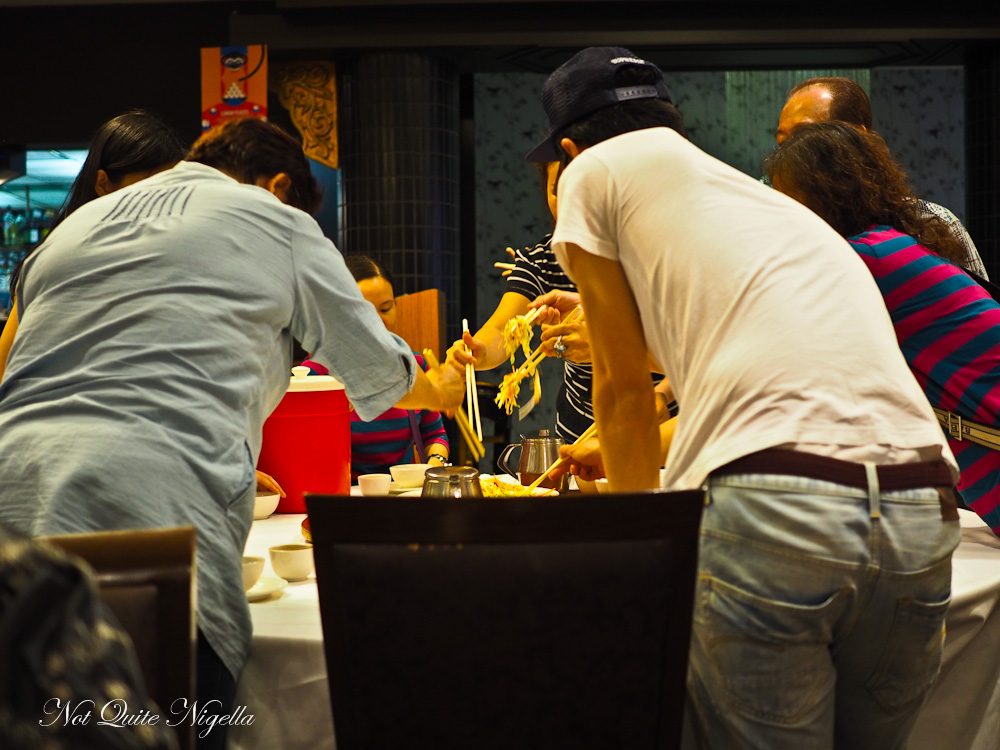 It's the day before Chinese New Year and the time for a reunion family dinner when everyone returns back home to celebrate and feast. We are in the thick of it, amongst one of the most touristy areas of Chinatown and part of the reason why we have been waiting so long is because our order got stuck behind some large tables of tour groups. Their meals come out fast and within an hour they are whisked away by their guide. We are given laminated menus and there is a range of the what's what of suburban Chinese food classics-sweet and sour pork, lemon chicken, spring rolls and fried rice. There's nothing wrong with that but as it is Chinese New Year we wanted something different. We hail the waiter and ask him for the "other" menu, the one with more choices. He slides one across in a hard cover binder. 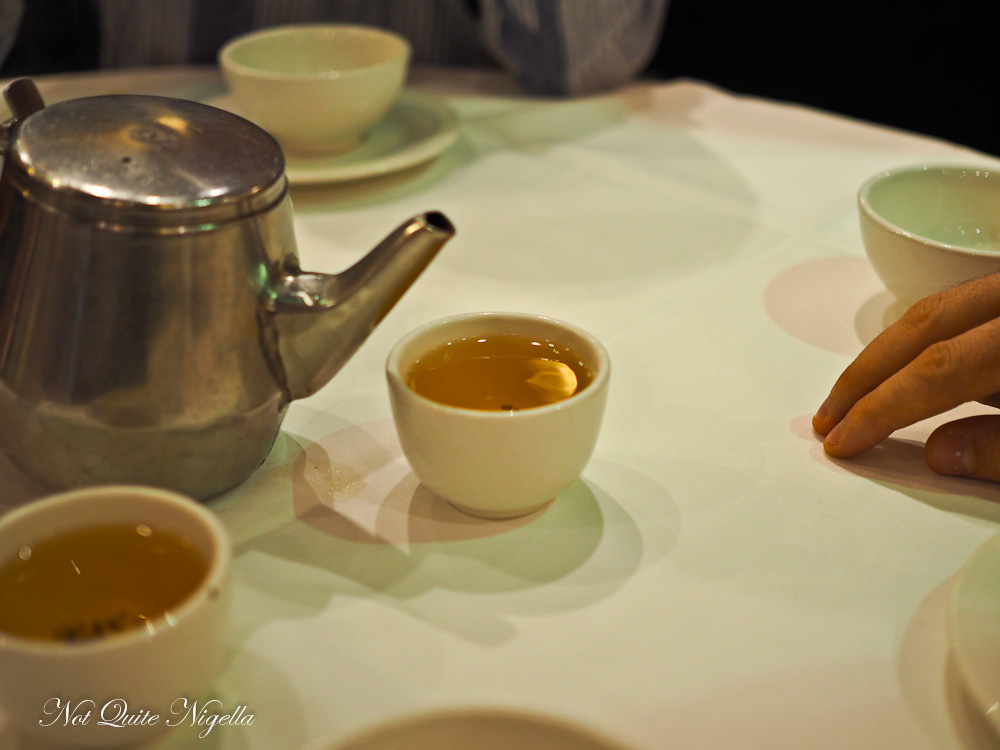 In the meantime we sit and refill tea cups and joke about my parents asking for a knife and spoon and seeing if they give it to Mr NQN (he always gets them when my sister asks for them). Mr NQN knows the art of being Chinese at the dinner table. You never fill your own teacup and when someone does it for you, you tap two fingers on the table twice to indicate "thank you." We watch as a tour group tosses Yee Sang - where that was on the menu we have no idea but my father doesn't eat raw fish (he was a food technologist and some of the things I eat terrify and probably disgust him). 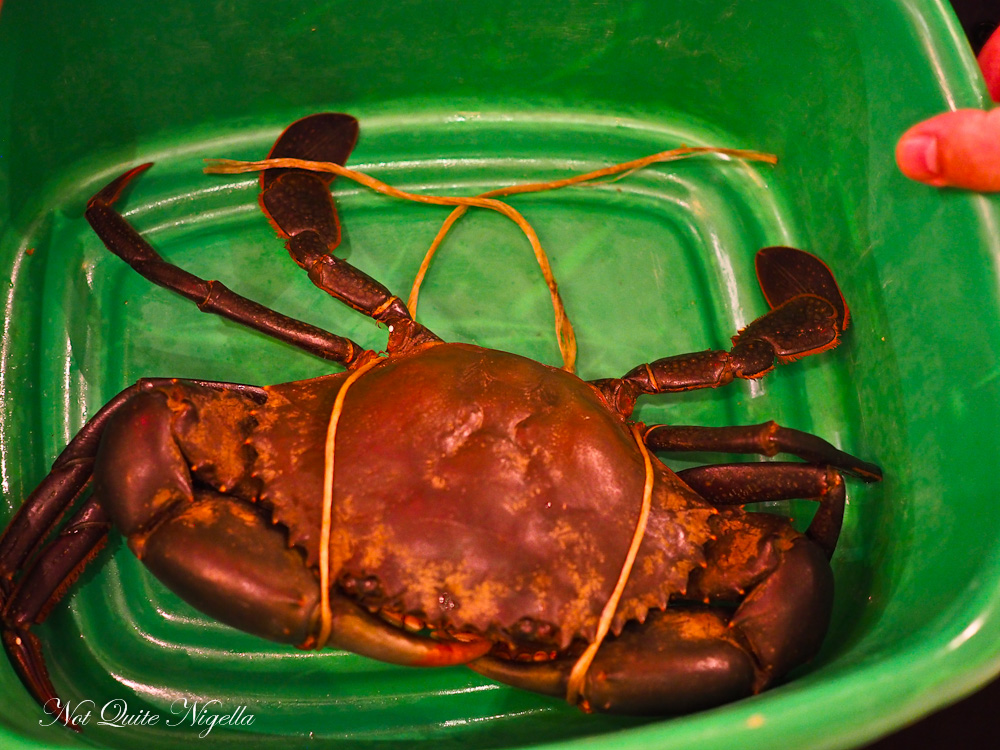 We flag our waitress down and she is surprised to hear that we haven't been shown the crab. Whenever you order live seafood, they bring the crab over with the weight on a sticker for you to inspect. A waiter shows us the crab but when we ask about the weight he says he will be back with it. He isn't. They do seem rather flat out though which is curious considering the restaurant is only half full. 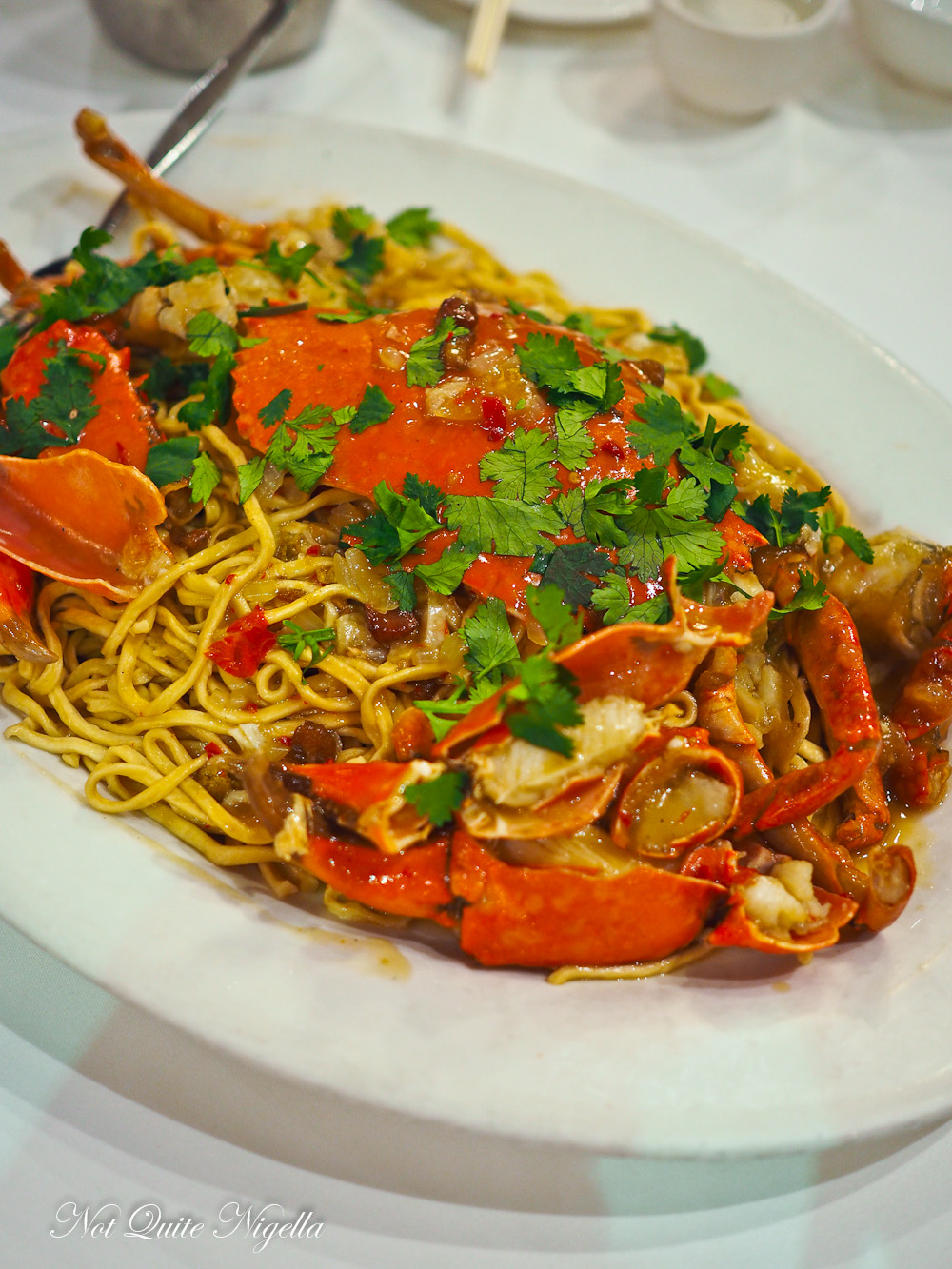 About 10 minutes later the crab with a double serve of efu noodles arrives, steaming hot. The crab meat is actually very sweet and tender and it's a meaty crab (we really weren't quite what the food would be like given the wait) and while there could be more XO in the sauce it's a very satisfying dish, perhaps made more satisfying by our hunger. We have to ask for the crab crackers and a fingerbowl and wipes. And when they bring them, they only bring three. 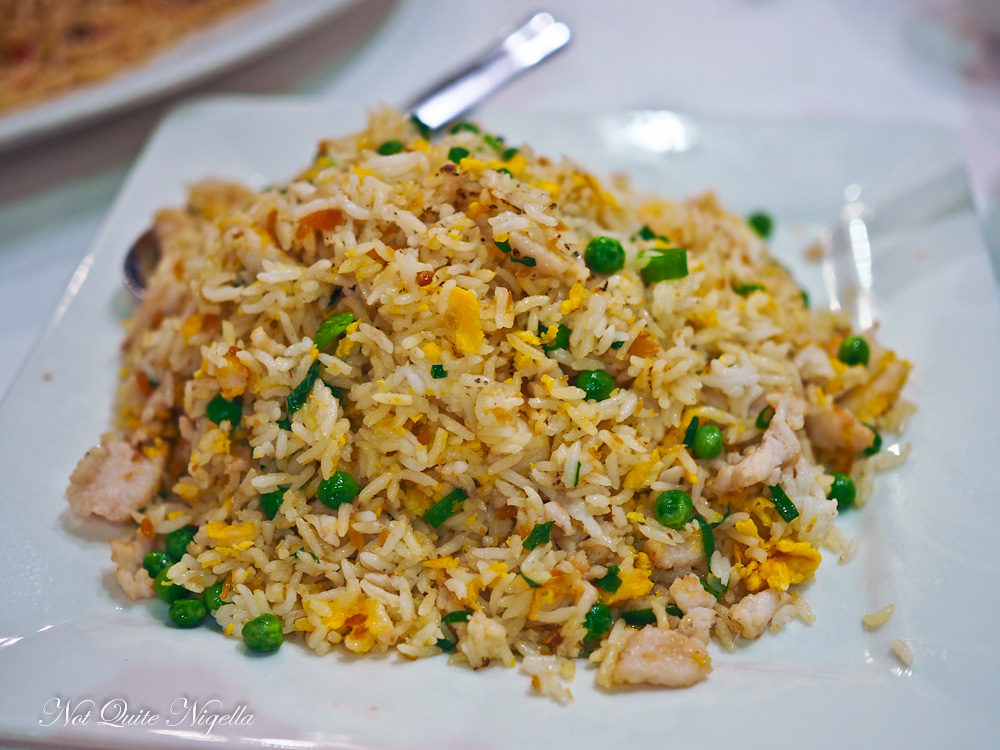 There's this debate within our family about rice. We have now settled on ordering fried rice because when you're with a large group and you pay for rice per person you may as well order something like fried rice which is more effort than steamed and since most of us don't eat a lot of rice, we never eat enough steamed rice to make it worth it. Also you can take away fried rice whereas you can't really with the steamed. Call it my family's strange kind of logic. And that's the kind of stuff you discuss when you wait for an hour for food ;) And this one? It's really quite good and while Mr NQN finds it too fishy, the rest of us enjoy it. 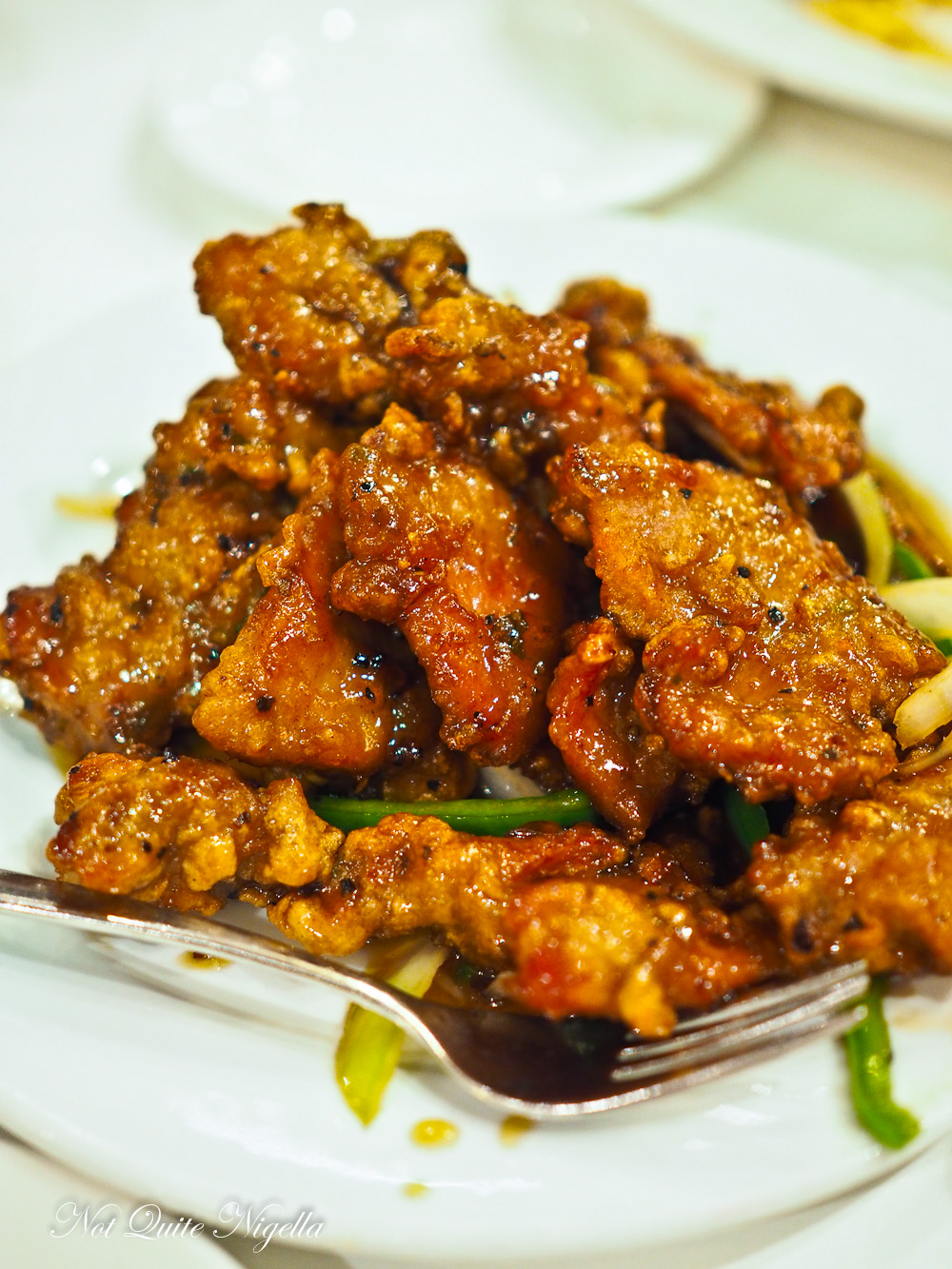 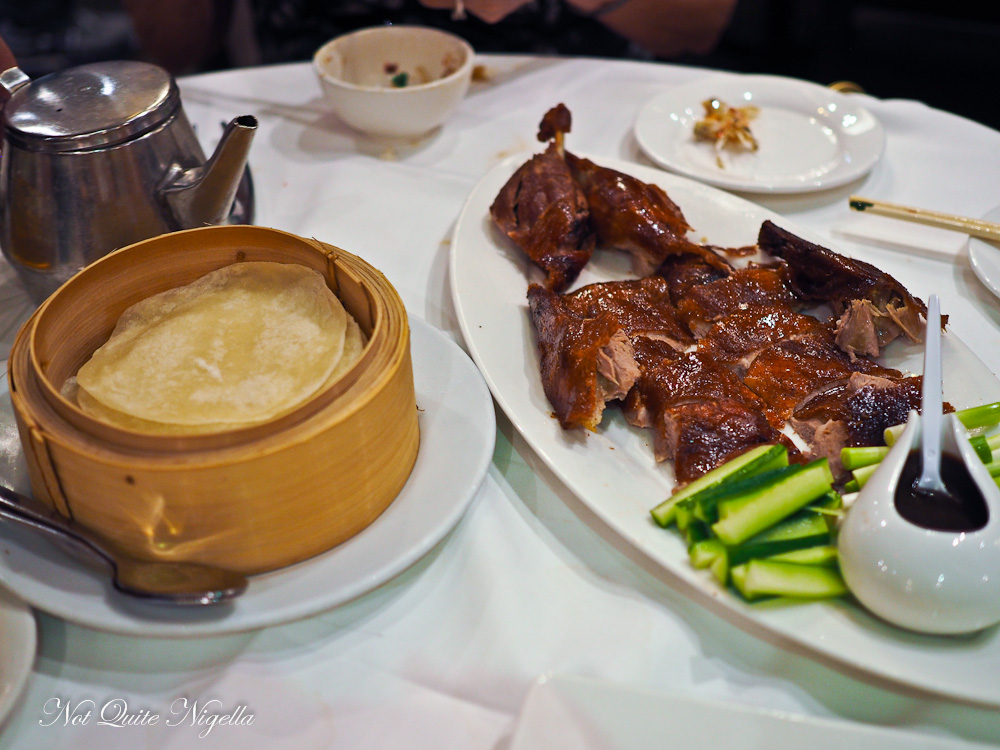 The Peking duck pancake course comes out and the pieces of duck have a lot of meat on them. We all prefer thin, crispy skinned pieces with hardly any meat. The skin on this is crispy but the thick cut of meat makes it a bit drier. 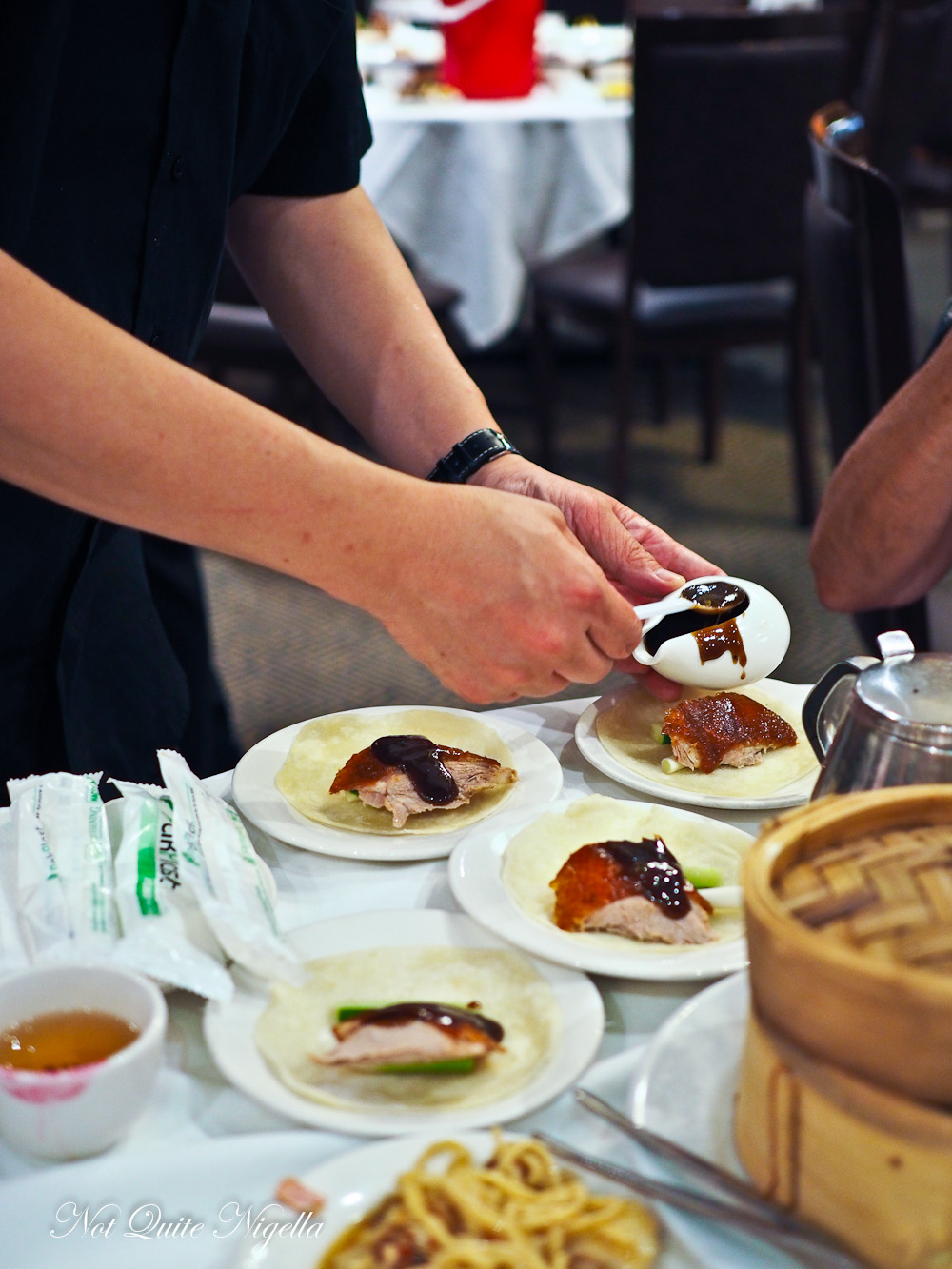 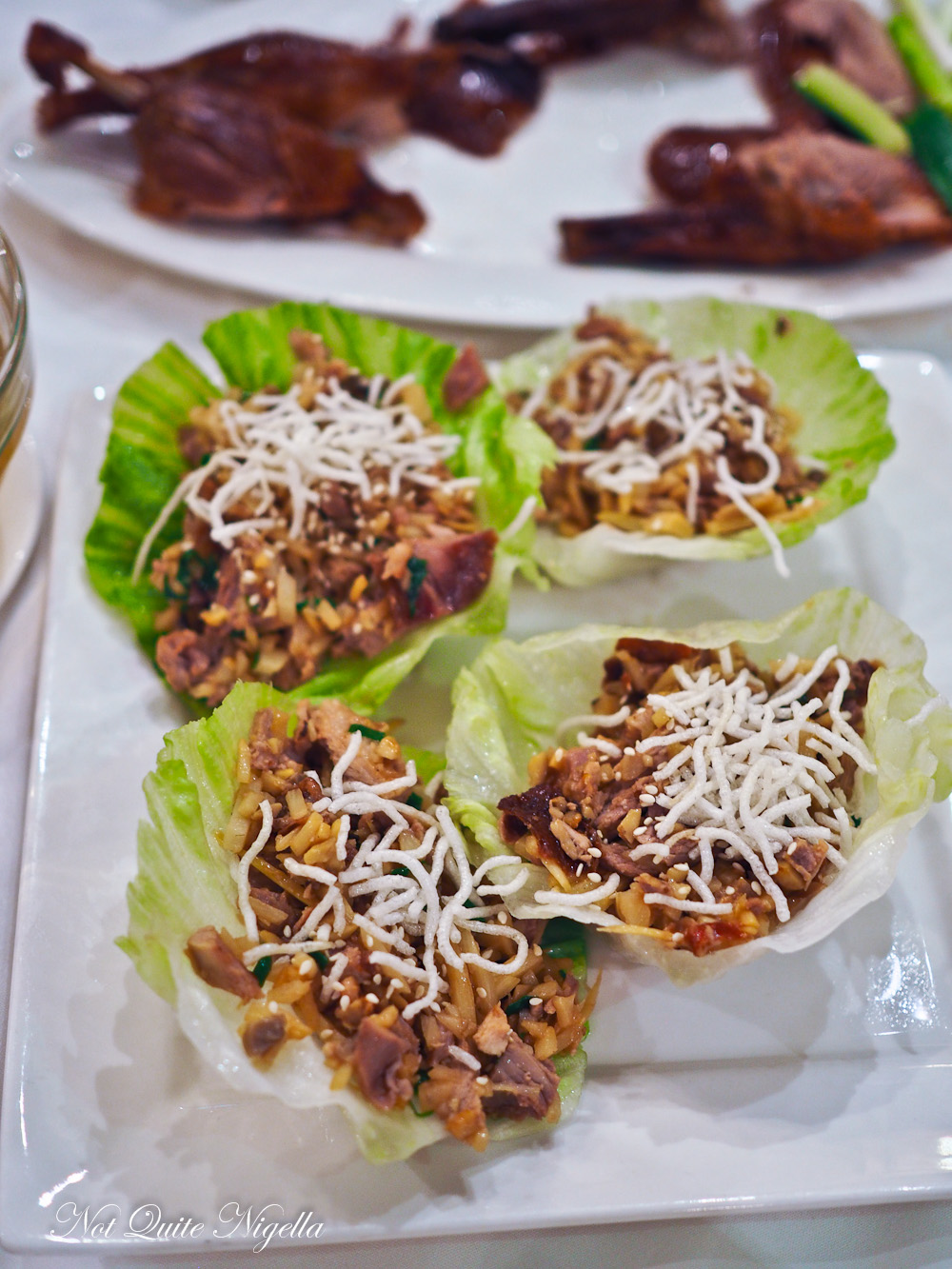 Shortly after the sang choi bau arrives. There was a choice of Peking Duck fried rice, noodles or sang choi bau and we love the crunchy filled iceberg lettuce leaves. At this stage, we are very full so we share these.

There's no fruit plate here which is unusual, only the tour groups seemed to be given plates of sliced oranges. Nor is there a Chinese New Year treat which we've had at other restaurants on Chinese New Year. Slightly confused by the whole experience we pay and leave. Chinatown's Dixon Street outside is full of life.

So tell me Dear Reader, do you order steamed or fried rice with Chinese food? Did you celebrate Chinese New Year this year? Do you know what Chinese starsign you are (you can work it out here)? And are you typical of it?