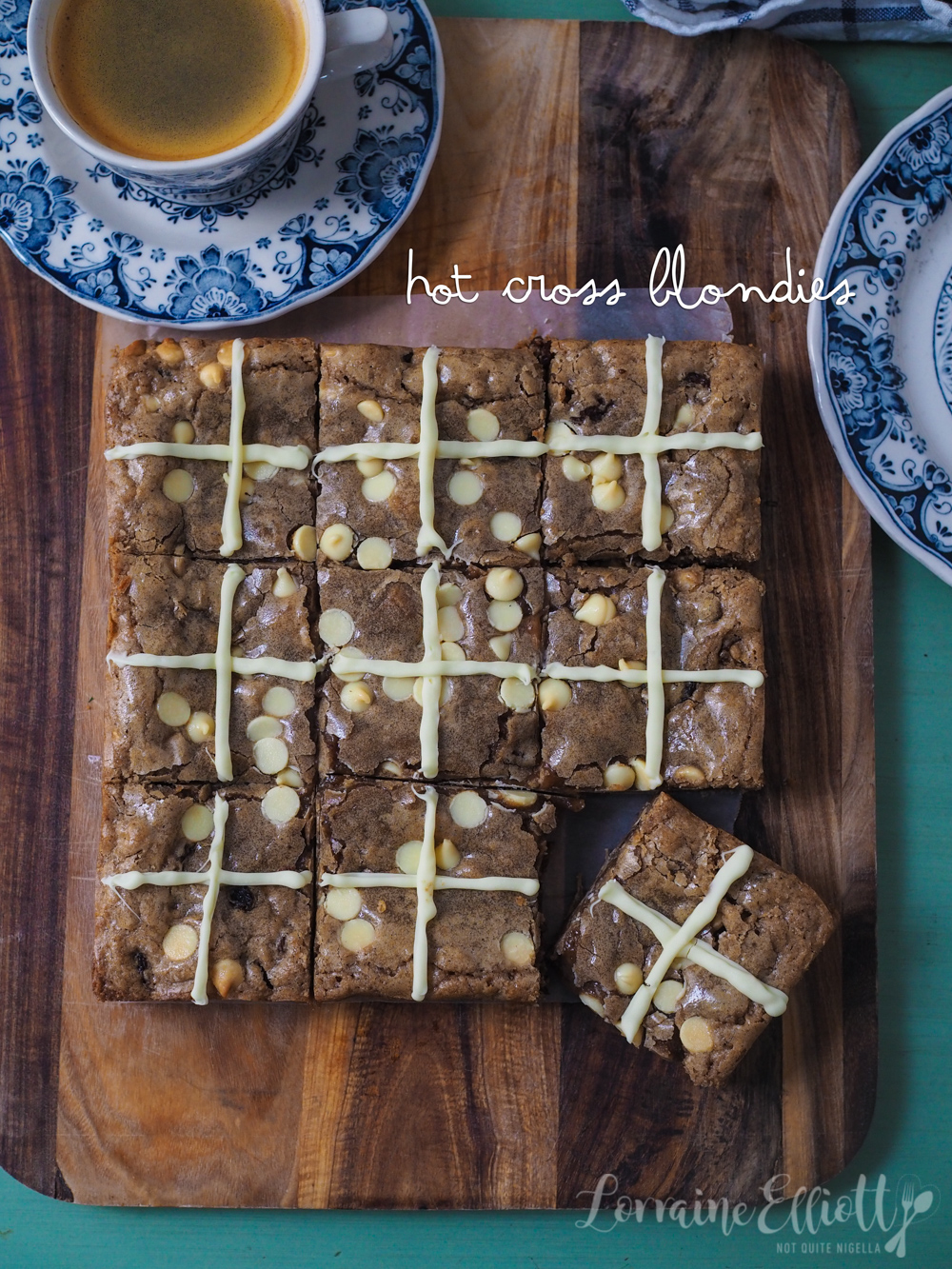 These Hot Cross Blondies are an utter delight for Easter (or really any time). If you love fudgey, delicious blondies and hot cross buns or pumpkin spice then you'll adore these Hot Cross Blondies. They're made with cinnamon, nutmeg and cloves with rum soaked sultanas and white chocolate chips. And on top? A white chocolate cross of course. These taste exactly like hot cross buns and are a pushy recipe! 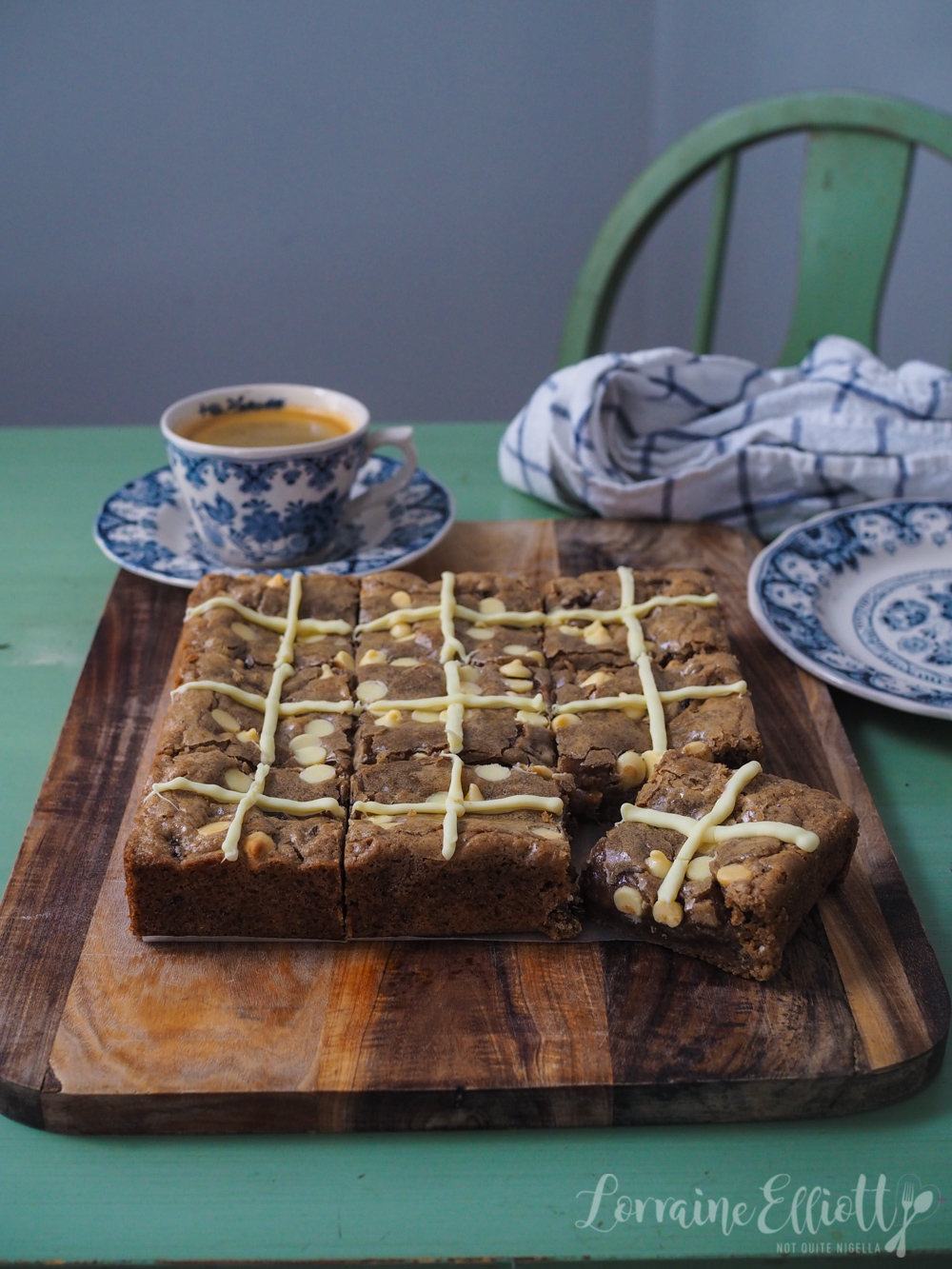 Sometimes you just need the easiest path to things and while making hot cross buns might be natural for seasoned bakers, for others it's a bridge too far. These Hot Cross Blondies are for those bakers that don't want to bake bread but love the flavours of hot cross buns. All these brownies need are a bowl to mix everything in and a saucepan for melting the butter. That's it. No other equipment necessary which is part of the reason why I adore these hot cross blondies so much. For Americans who are less familiar with hot cross buns, these are flavoured like pumpkin spice - you can omit the sultanas or raisins if you want.

Every year we look forward to the Easter weekend because it's four days in which to do very little. We've been busy and this past weekend we stayed at a tiny house and this was my first time in one as I'm not really great in small spaces. It was a surprise for Mr NQN as it was a remote location, far from crowds in the wilderness which is just about everything that he loves (and honestly alarms me). I had it all planned out. Tuulikki would take Teddy for the weekend and we would drive there on Friday night. 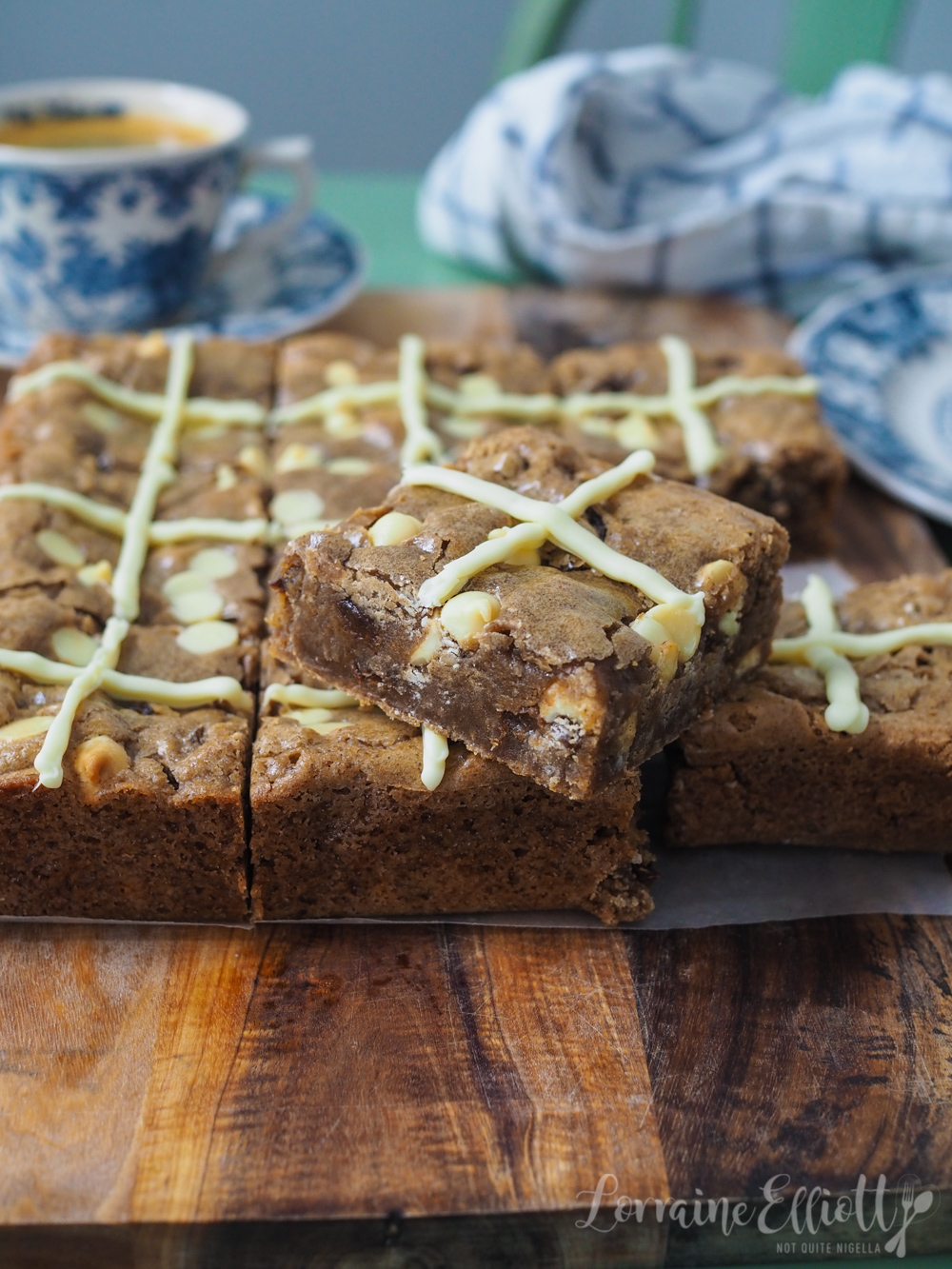 Then early on Thursday morning I got a text from Tuulikki that she wasn't feeling well. She had taken two RAT tests and they were negative so she figured that it was because she got caught in the rain and floods. I was still worried and asked if she could take a PCR test but she wasn't keen. She's an anti vaxxer at heart who got vaccinated so you do have to explain certain things to her like the impact of infecting others. I explained that if Mr NQN dropped Teddy off to her and she had COVID that he may get it and then might spread it to me and others.

After much pleading she finally relented when Manu Mr NQN's brother agreed to drive her (we offered to pay for her uber or taxi but she didn't want to). That night she messaged me that she received a positive result. Panicking and seeing our weekend away ebbing away I scrambled and tried to find anyone that I could to look after Teddy. As for Mr NQN his solution was simple. "Just cancel it," he said. "We don't have to go," he said shrugging his shoulders. 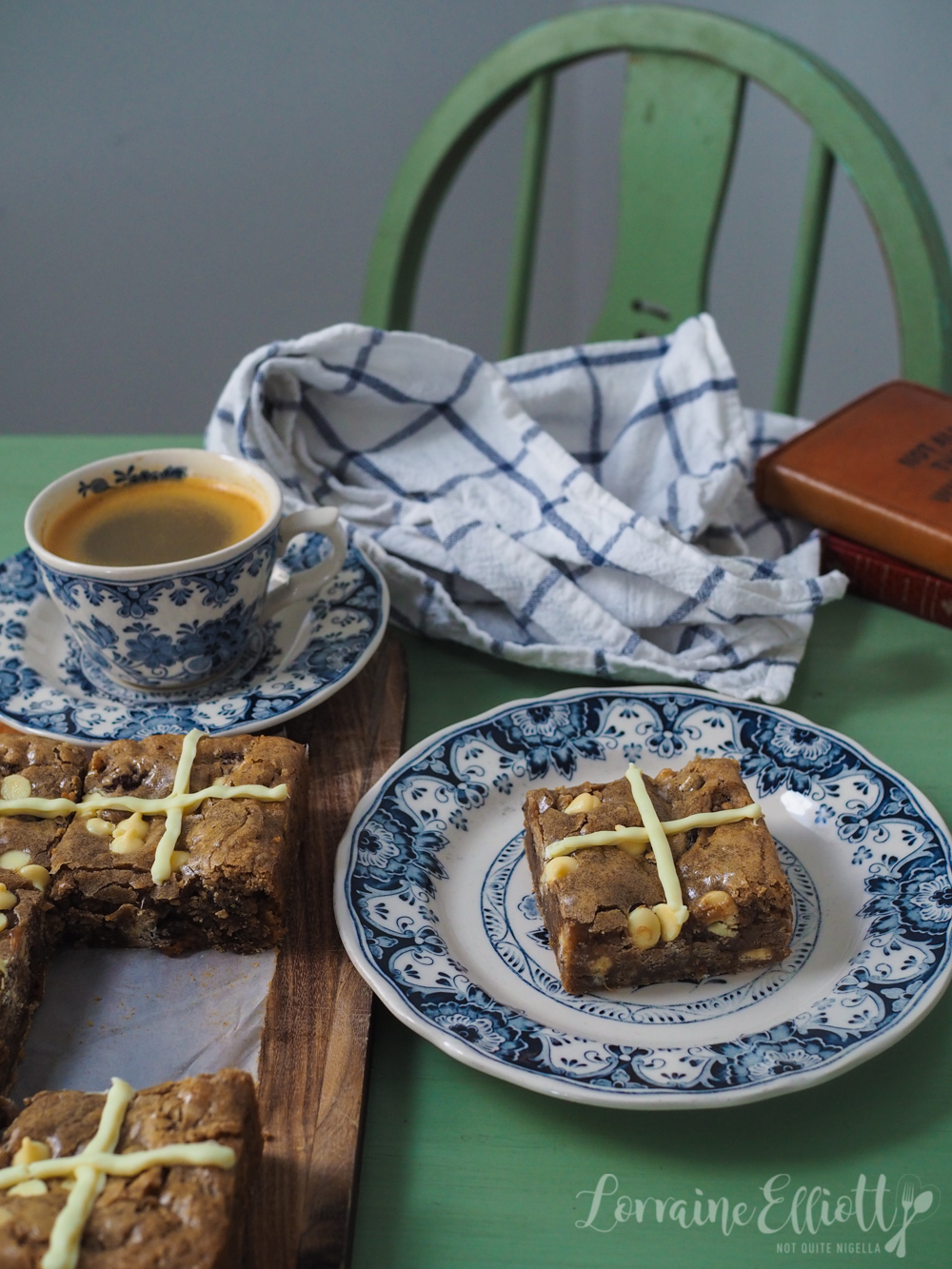 "What am I bothering making this surprise if he doesn't even care?" I asked myself. Was this for him or was this for me? We finally got someone to look after Teddy, it was Sammie who was in ISO with her husband David (she was negative and living in separate quarters from him). The Friday morning we were supposed to leave I got a message saying that the roads were muddy and that we should park 350 metres away and bring our things by foot. All I could think about were the leeches so we decided, for everyone's sake, that we would leave Saturday morning instead so I could look out for leeches in the daylight and see them coming. Thankfully it was sunny pretty much the whole weekend. We had a wonderful time (more to come on that stay soon) and afterwards we headed back to Sydney. 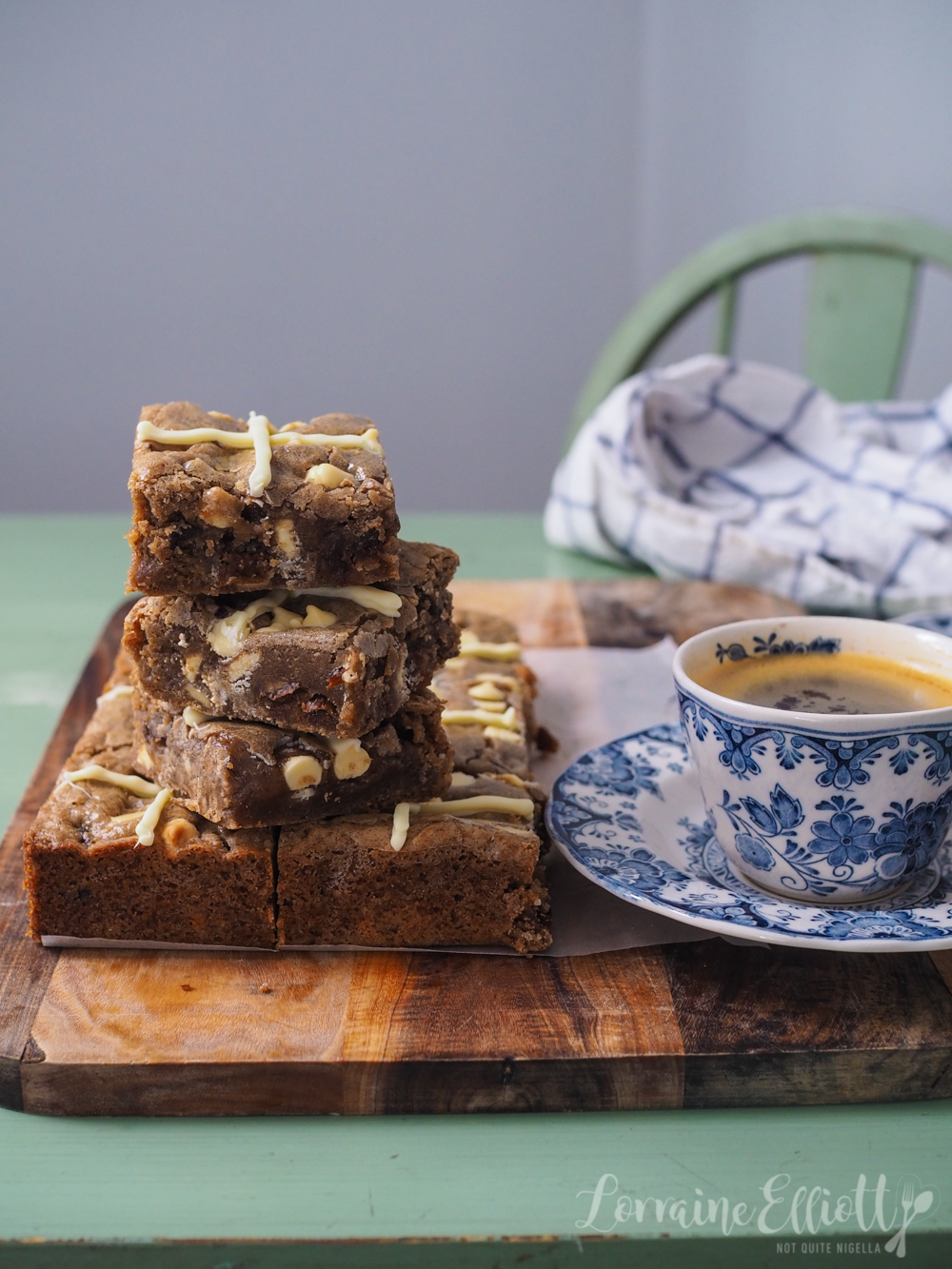 "So did you enjoy it?" I asked Mr NQN excitedly.

"Yeah it was really good," he replied.

"Aren't you glad that we didn't cancel?" I asked him before asking him why he was so quick to give it up.

"I don't know, it was the easiest thing to do" he said shrugging. You see Mr NQN likes going by the path of least resistance and just wants as easy a life as he can get. Which made me wonder why he married someone like me!

So tell me Dear Reader, do you like the path of least resistance like Mr NQN? Or are you like me and are determined to get your way? 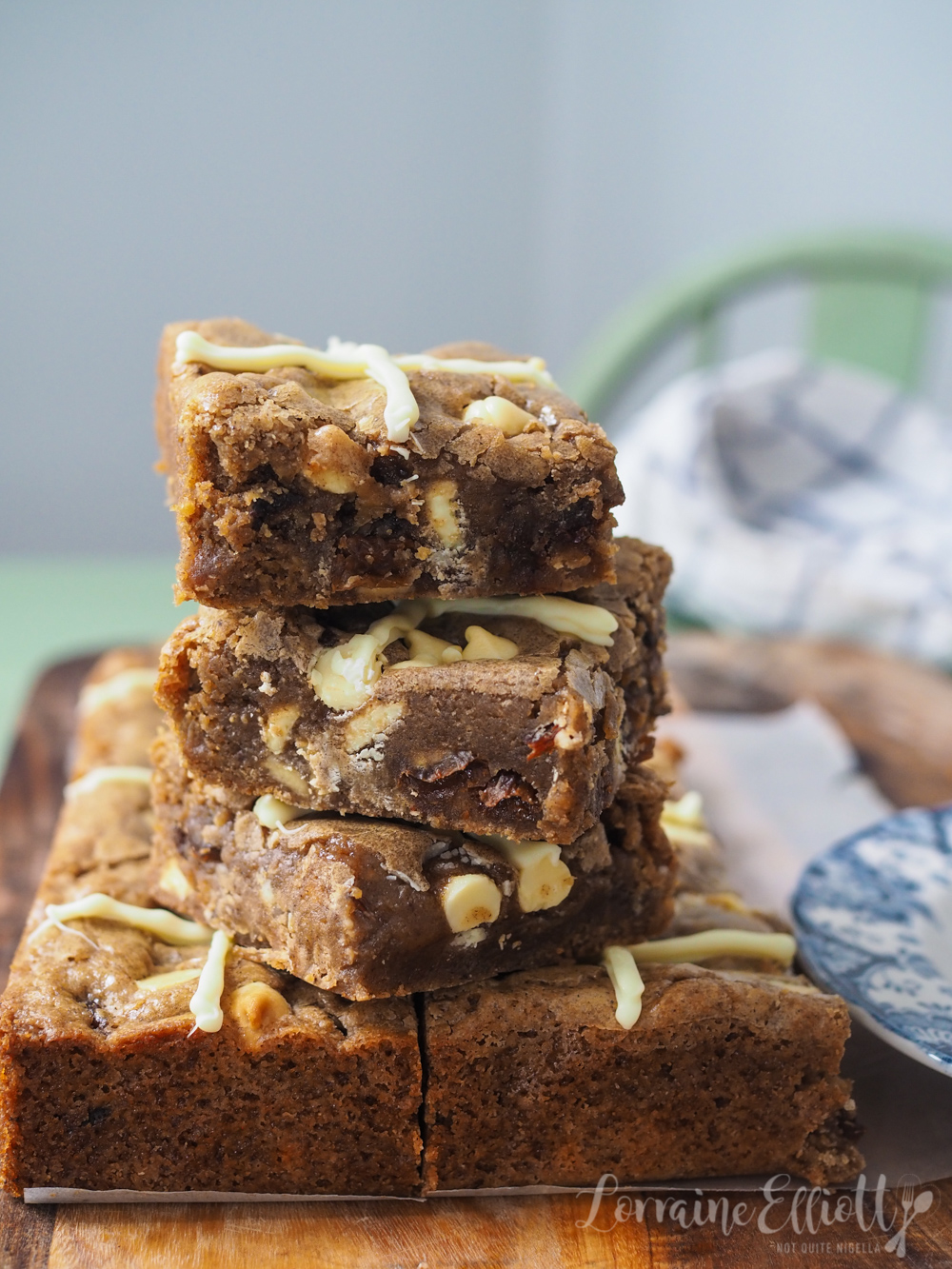 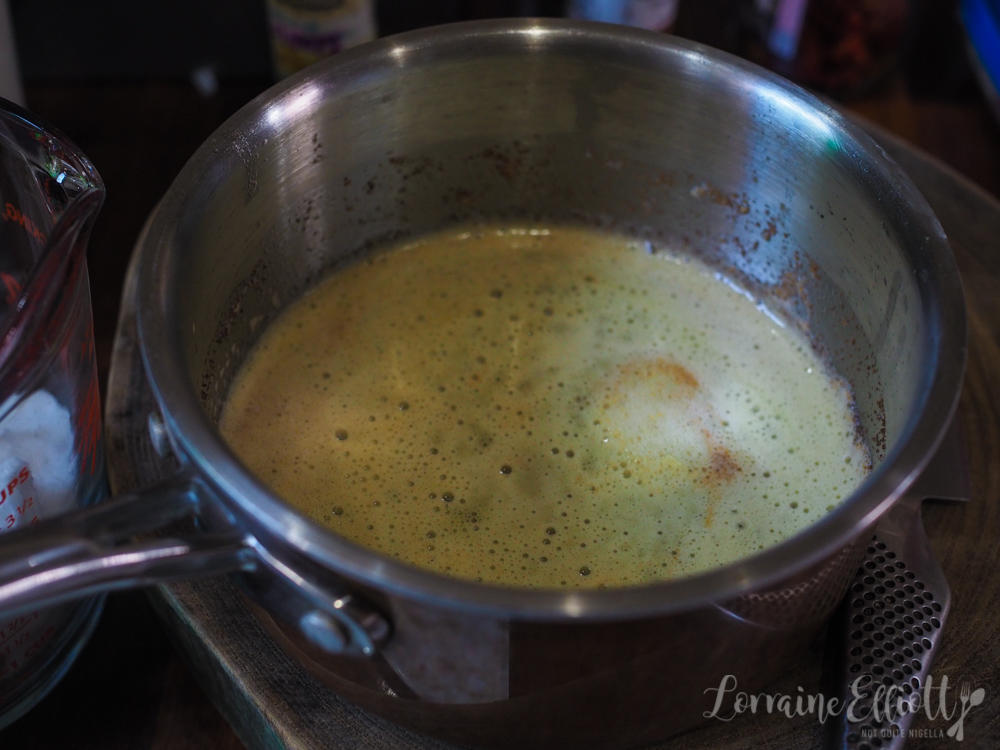 Step 1 - Preheat oven to 180C/350F and line the base and sides of a 20x20cm or 8x8inch square tin. Drain the sultanas from the rum. Melt the butter in a saucepan on medium heat and allow to froth and brown and become nutty smelling. Remove from the heat and cool for 5 minutes. 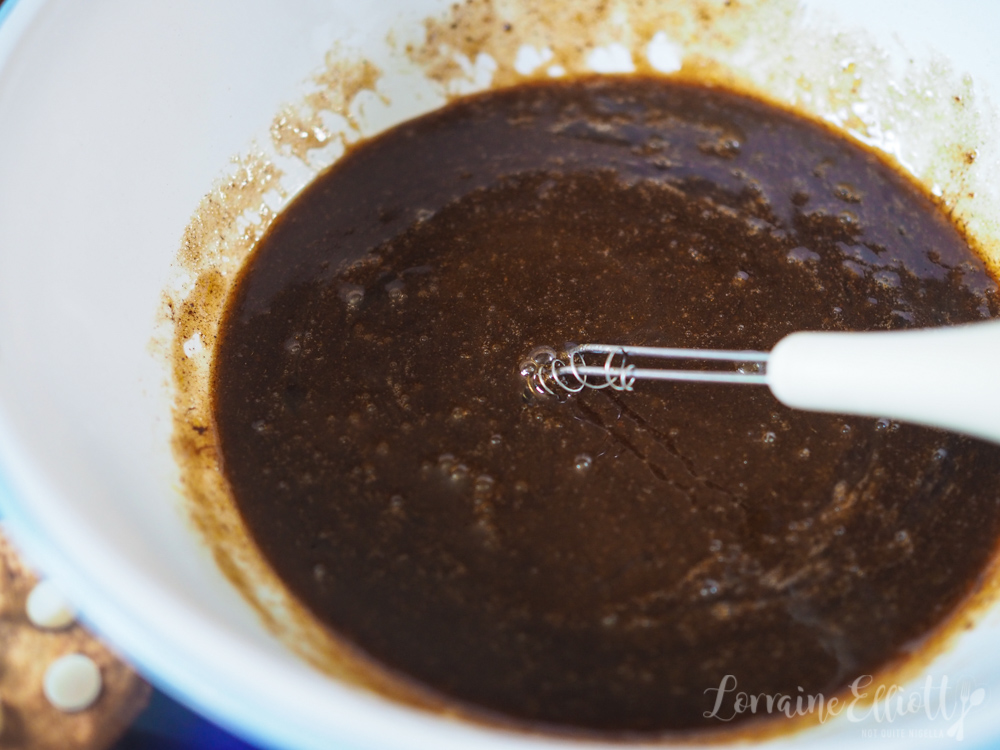 Step 2 - While the butter is cooling whisk the flour, baking powder, spices and salt together. Once the butter has cooled for 5 minutes, whisk in the brown sugar, caster sugar, eggs and egg yolk. Mix the spiced flour mixture with the drained sultanas so that the sultanas are covered in flour (this will prevent the fruit from sinking to the bottom) and add this to the mixture with half the chocolate chips and stir to combine. It should be a shiny mixture. Scoop into the tin and sprinkle the other half of white chocolate chips on top. Smooth the top with a palette knife and bake for 25-30 minutes (you want it slightly gooey but not runny). Cool in the tin. 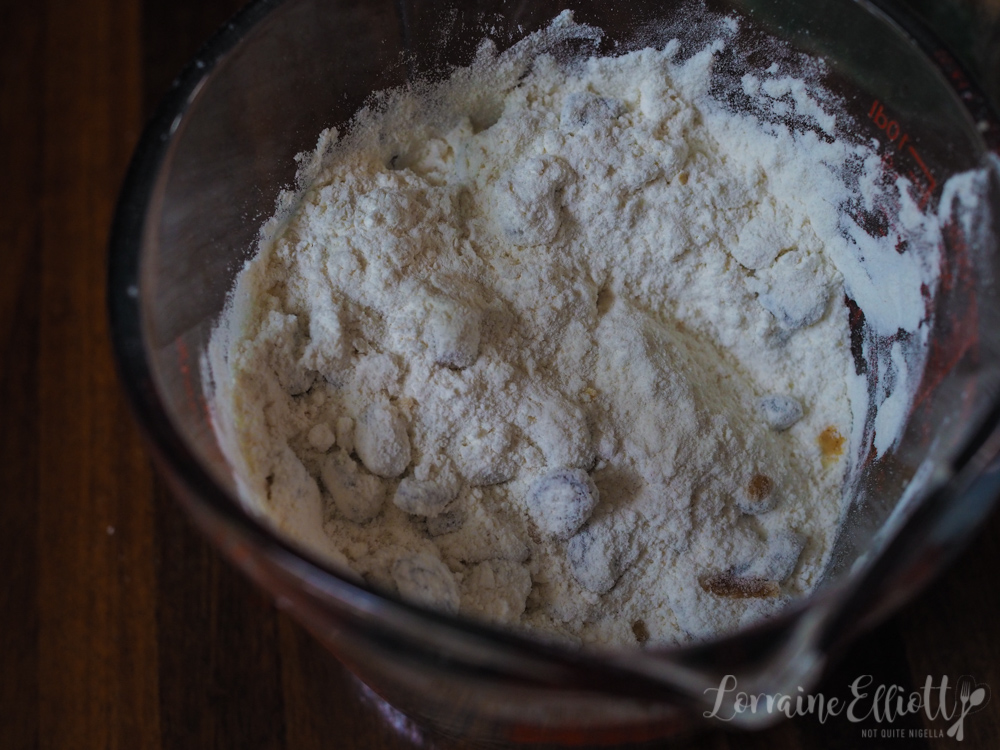 Coating the sultanas in flour

Step 3 - Melt the extra white chocolate and place in a small piping bag and pipe white chocolate crosses over the cooled blondies. For a cleaner cut, refrigerate the blondies until firm and then slice. 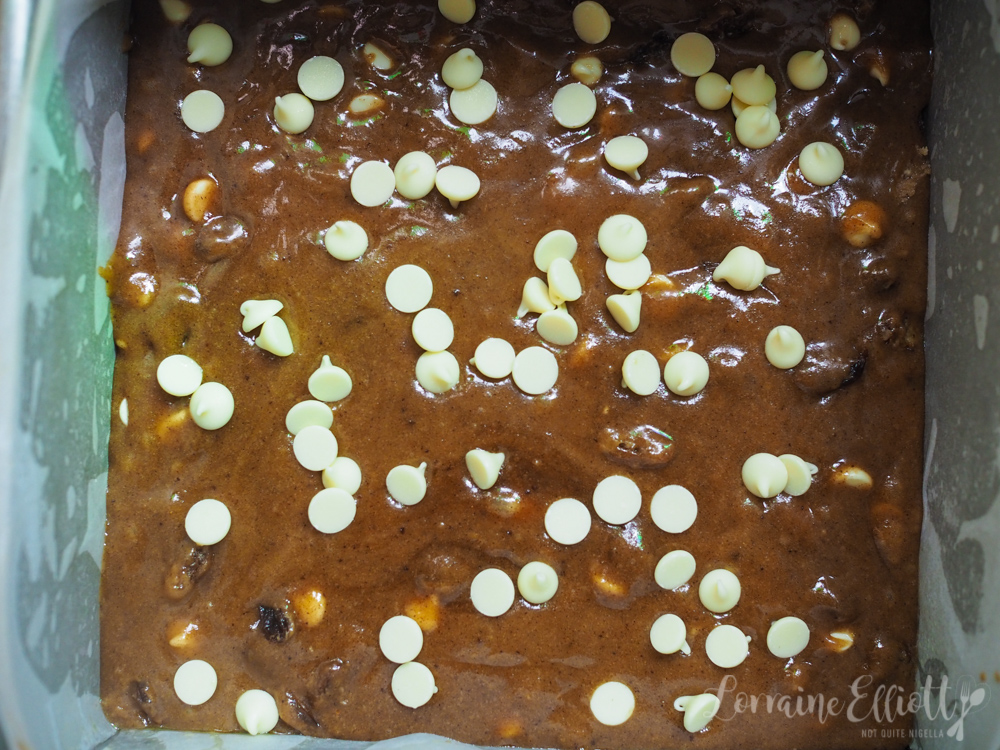 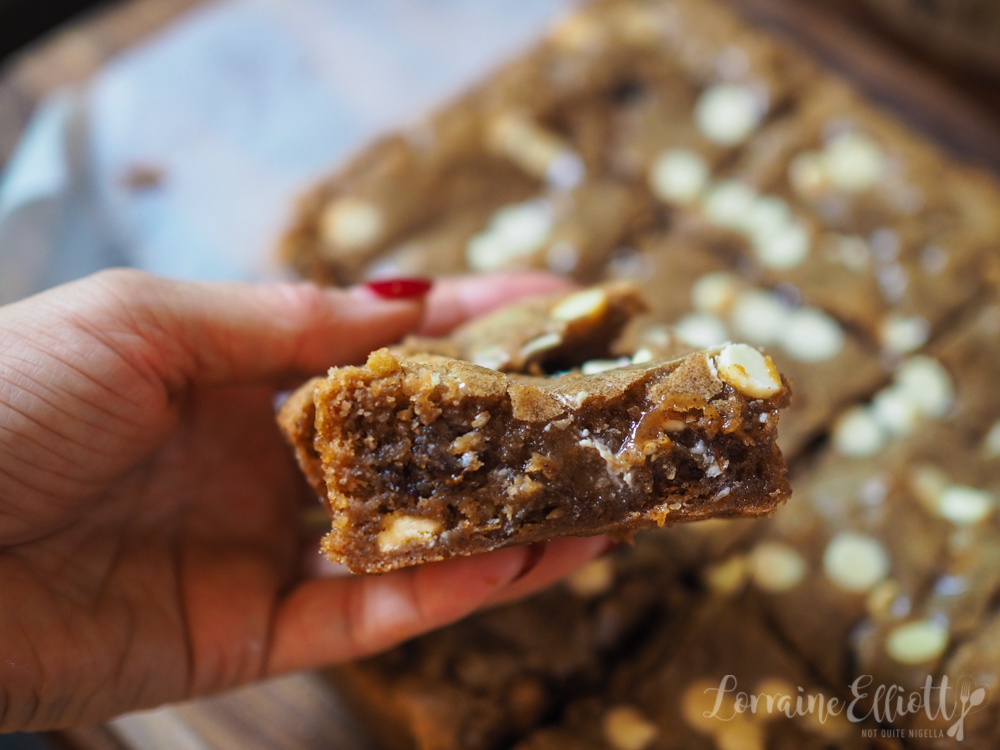 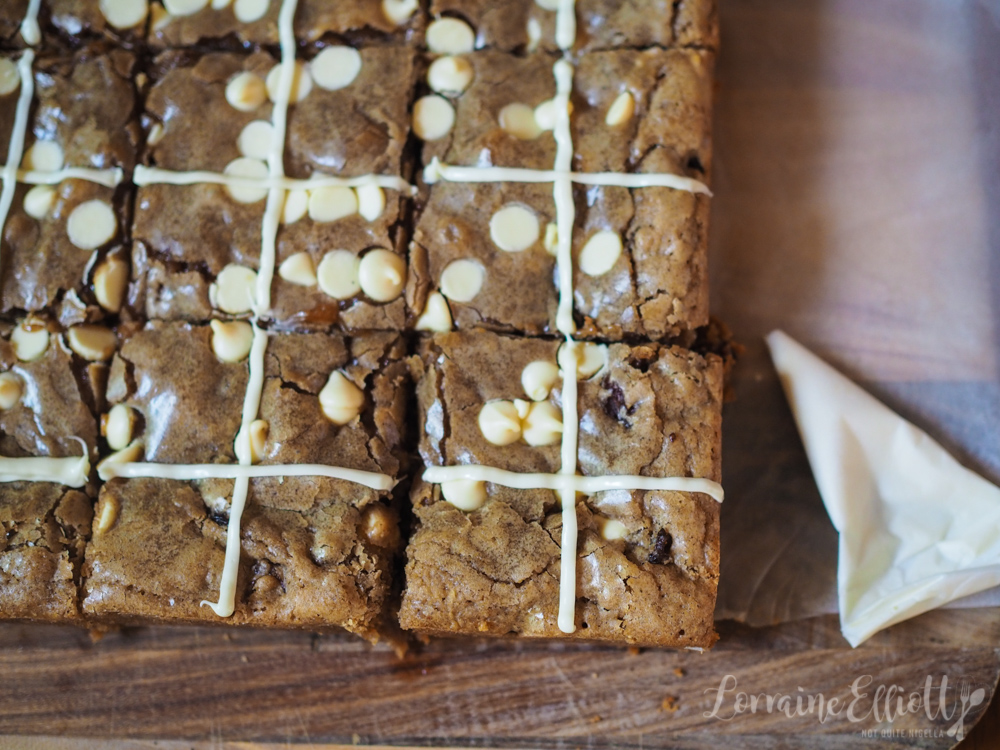 These taste exactly like hot cross buns and are a pushy recipe! 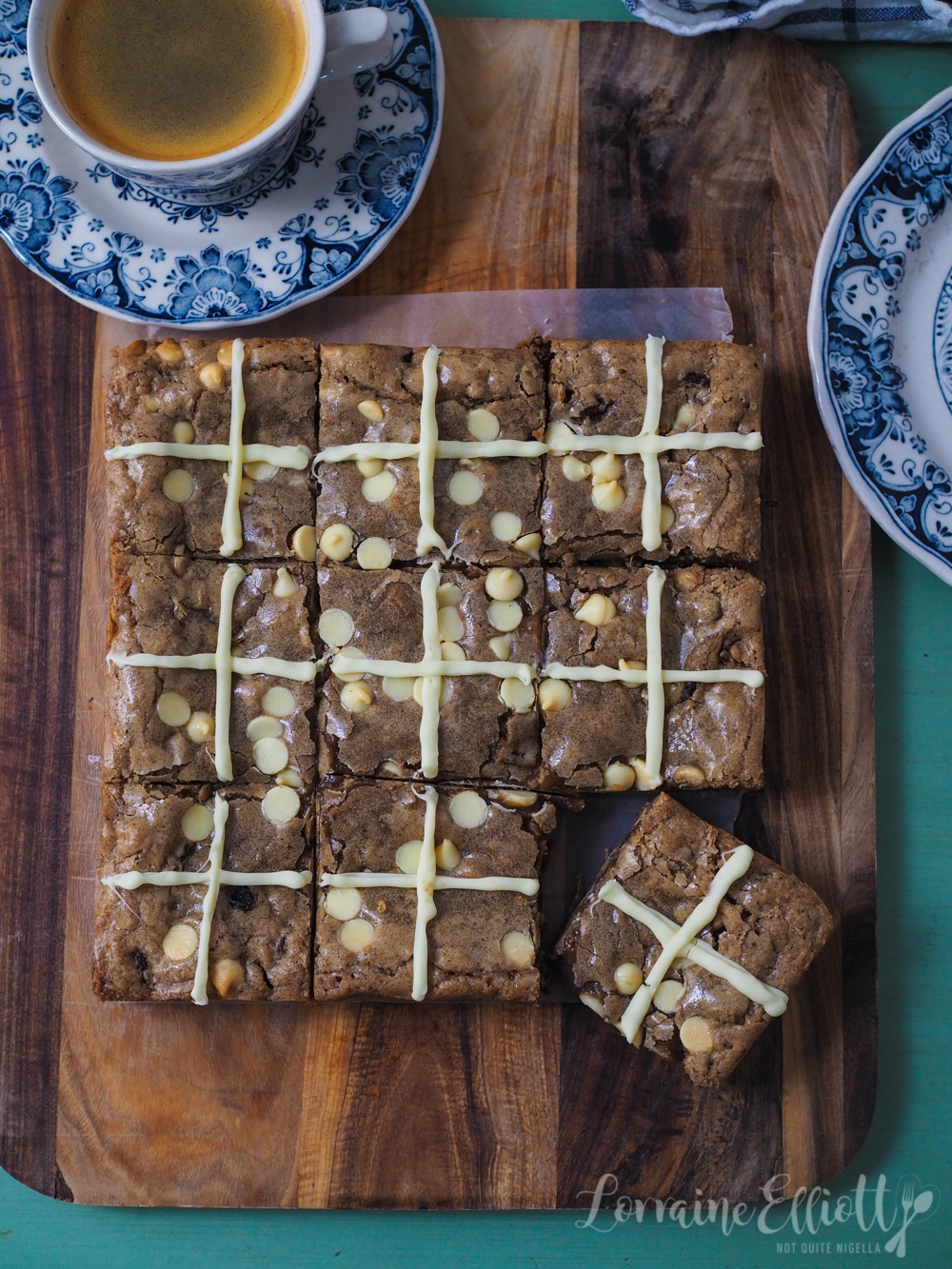