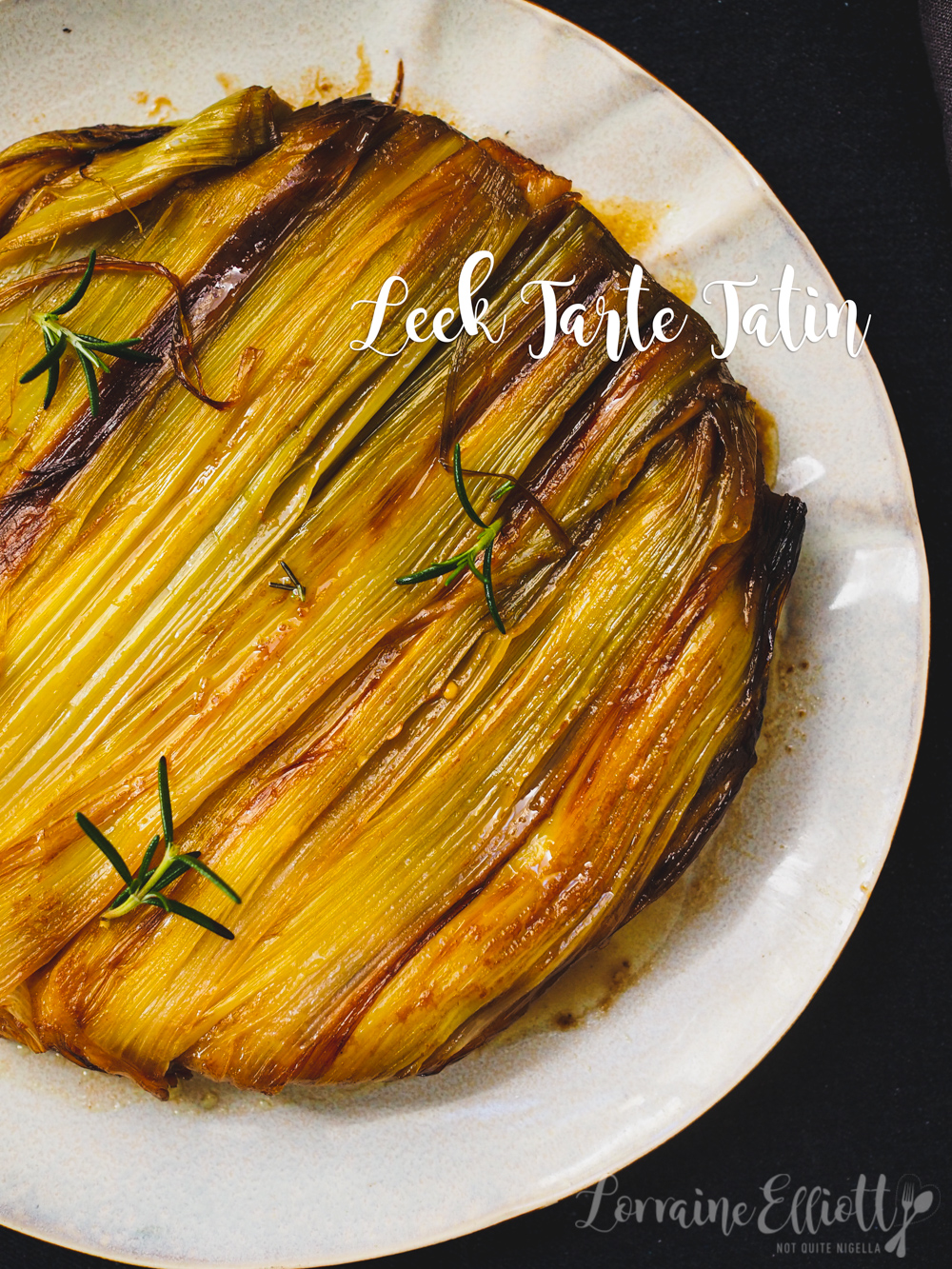 Leek tarte tatin is a delicious way to use up an abundance of leeks! It's so simple too-just roast the leeks until soft and then pair with buttery puff pastry, balsamic and mustard for an elegant but delicious lunch! This is a pushy recipe Dear Reader!

I love anything in the allium family from onions to chives to leeks. Late autumn to early spring is the best time to buy leeks and at the moment my local supermarket is selling them in packs of three trimmed for an absolute steal. Leeks are a sweet, mild onion and you cut off the dry green leaves at the top and keep the stem which ranges from white to light green. You can use the leaves in soups and stews and they just require a longer cooking time. I bought three leeks for $3 which was a nice vegetable bargain.

Leeks have fibre, vitamins and help with liver function. To me however they just are damn tasty and I will use any excuse to tarte tatin something especially if it has a pretty pattern to it. This tarte tatin has two parts to it. You basically roast the leeks first, then discard the top layer of skin which becomes a bit tough. Then lay them on a base of a springform tin overlapping and then pour over the mix of brown sugar, balsamic and mustard, dot with butter and then add puff pastry on top and bake. It's all very low key effort wise but it does take a bit of time to slow roast the leeks but sometimes the longest wait has the biggest rewards. 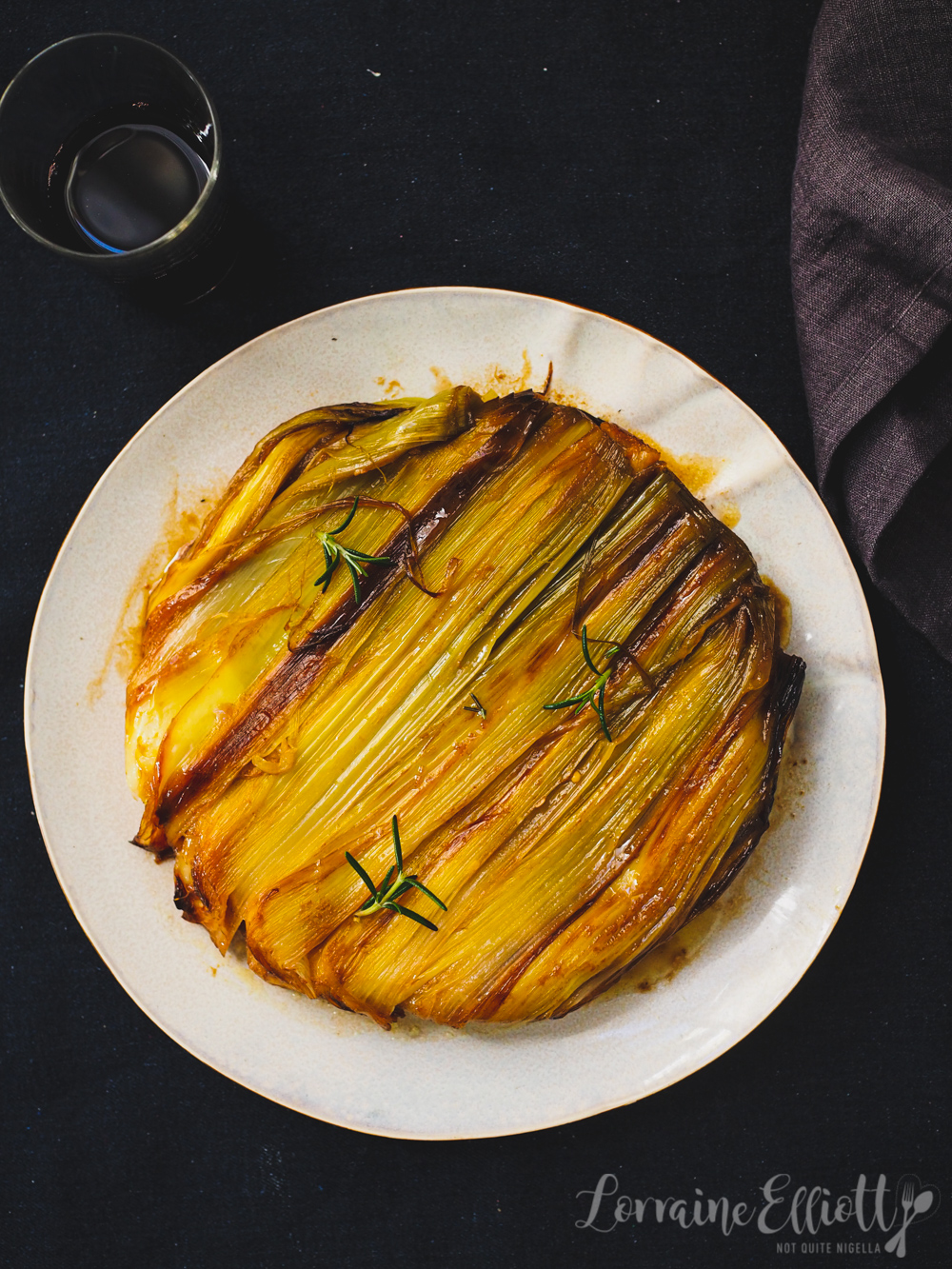 When I was getting ready to go out to buy these leeks it was pouring rain and I said to Mr NQN, "I need leeks". As food is the last thing on his mind and it was raining he looked at me frowning and said, "You want a leak?" he said pointing at the ceiling. We also had some issues with words when it came to our new puppy Milo. While we love the name we just blank on it when we want to call him. I overheard Mr NQN call him "Molly" and I've called him "Mango" more than once.

We discussed perhaps giving him another name. "Bear" was floated as an idea as he is so furry and it would be cute to have Teddy and Bear. Then I thought of Seinfeld, one my favourite tv shows and suggested Georgey but said like George Costanza's mum Estelle so that it's "Georgey!!" in a high pitched voice. Then Monica and I went through a list of great Seinfeld characters that would make great names. I personally liked the idea of yelling out, "Uncle Leo!" across Sydney Park and a name like Mulva might attract attention from fellow Seinfeld fans only. If we had a crazy dog he could be called Crazy Joe Davola. "Stellllaaaa" would possibly be the ultimate name to call out from a distance.

A few months ago there was a litter of six pups on the pet rescue website and they were each named after a character on Friends. It was such a great idea and the dogs were adopted immediately. By the time our discussion was over, we tried Bear but that failed to stick and we drew a blank. And by then Milo was firmly etched in our memory. Milo it is!

So tell me Dear Reader, how did you find a name for your pet? Do you like leeks? 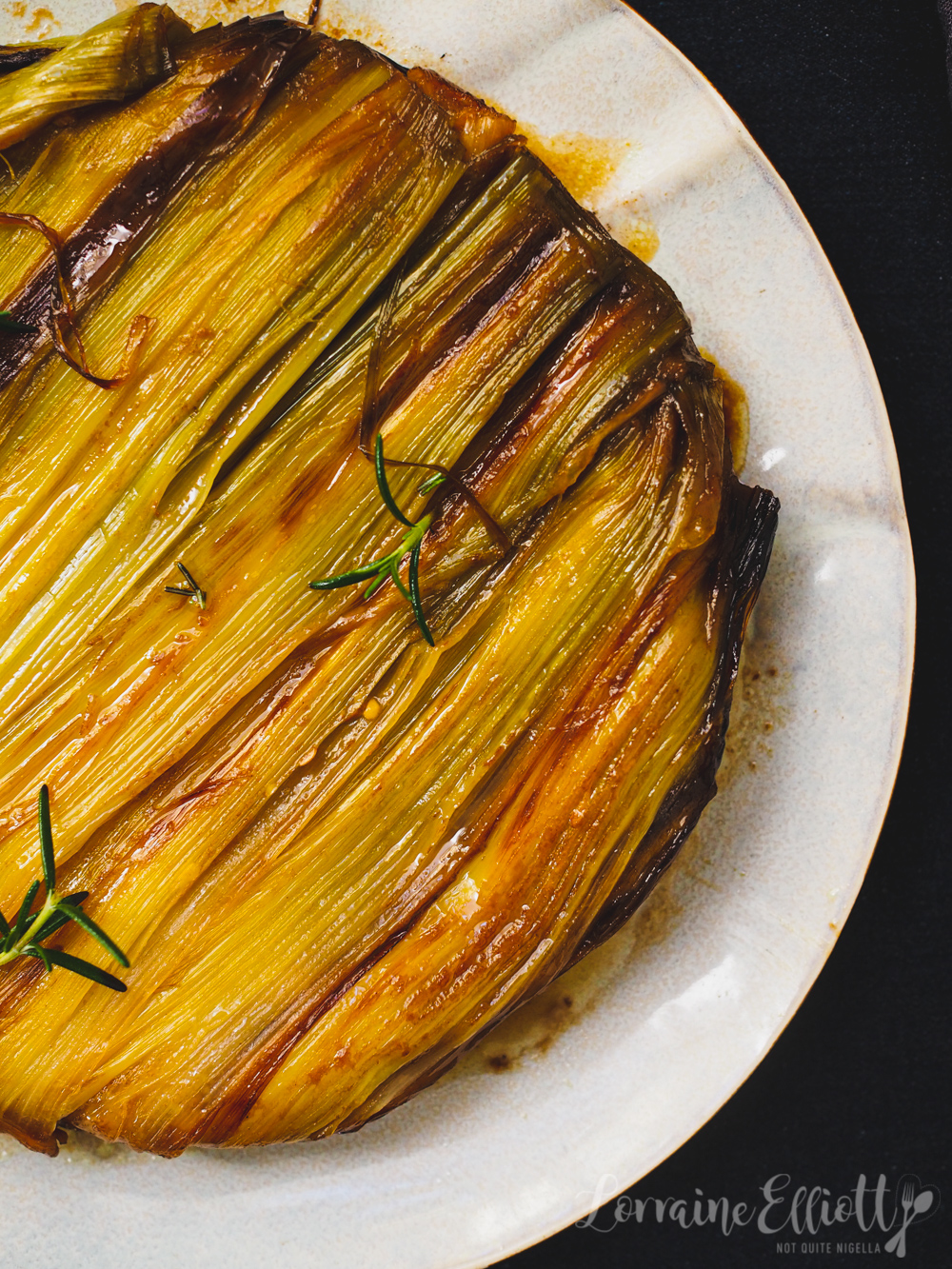 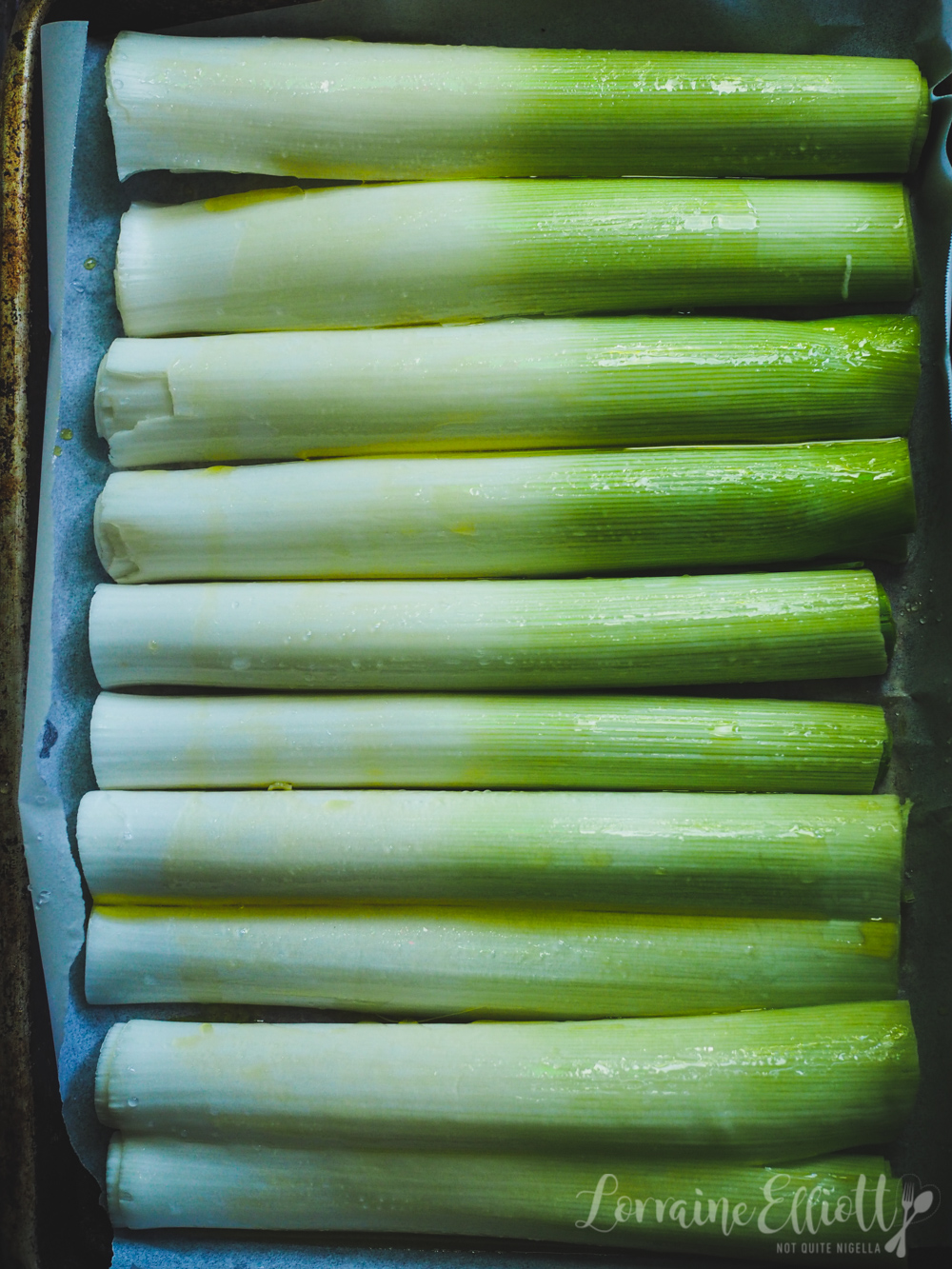 Before roasting, leeks placed cut side down

Step 1 - Preheat oven to 200C/400F/gas 6 and line a baking tray with parchment. Brush 1 tablespoon of oil over the base and then slice leeks lengthways down the centre. Open these up a little and rinse these in water just to make sure to remove any dirt-I didn't find any dirt in these so maybe they were washed already but when I use leeks with the tops on I always tend to find dirt hiding in there at the top. Drizzle the rest of the oil over and then roast for 30-40 minutes (depending on the thickness of the leeks). Allow to cool for 15 minutes so that they're easier to handle. 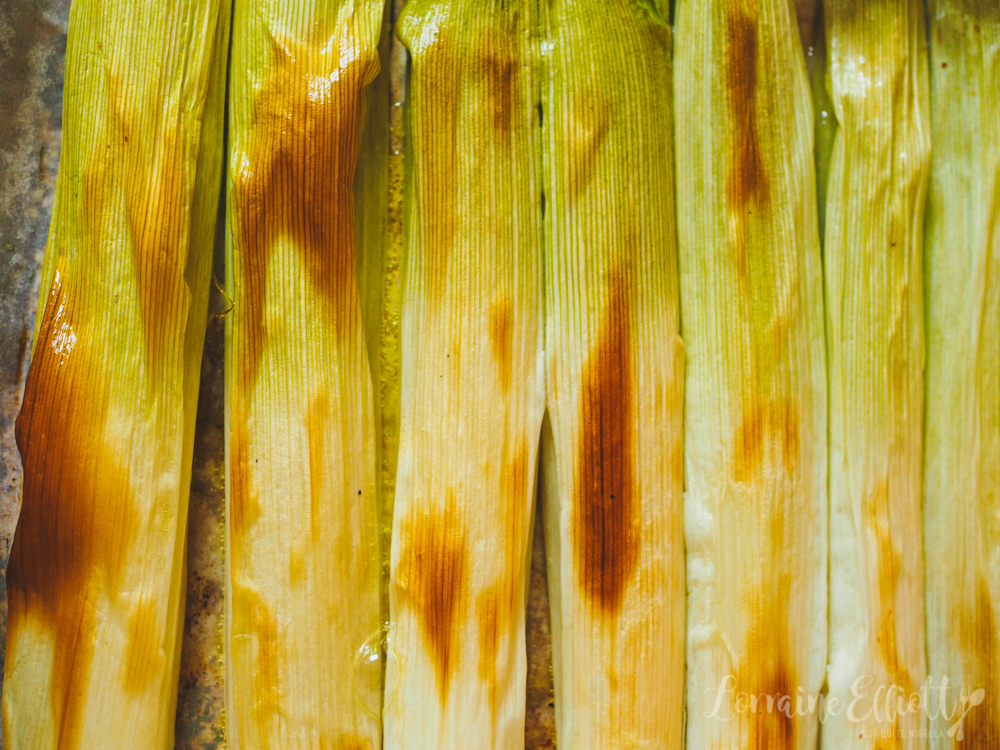 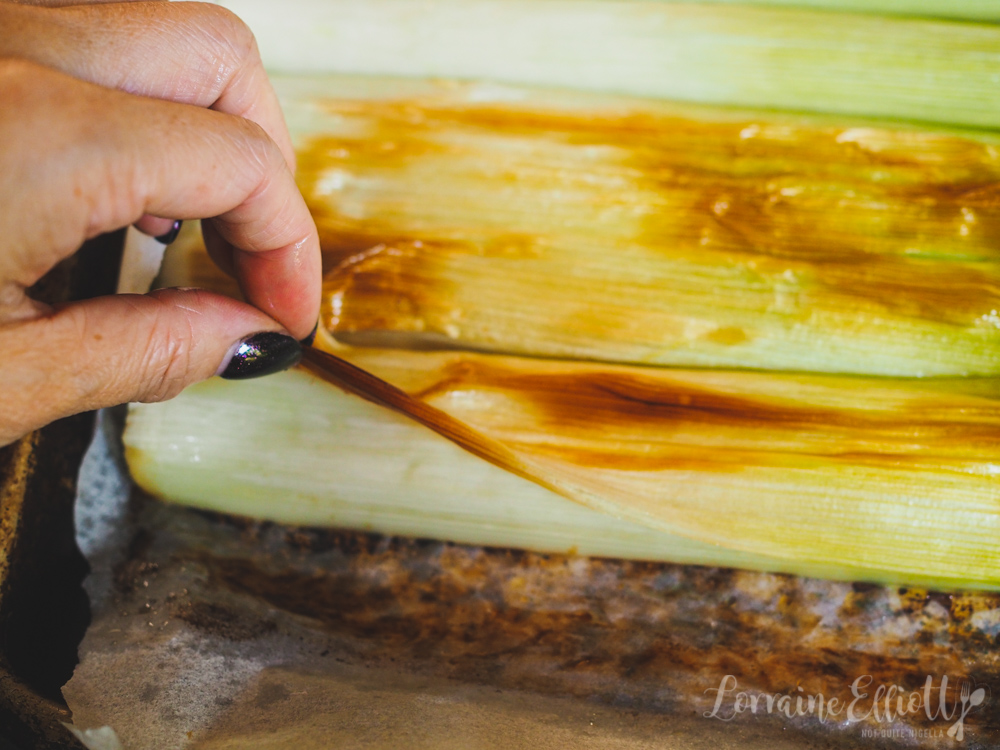 Peeling off the top layer of skin

Step 2 - While they're cooking and cooling get the sauce and pastry ready. In a bowl mix the brown sugar, vinegar, balsamic reduction and mustard and put aside. Line a 20cm/8inch springform tin on the base and place on another tray to catch any drips. When the leeks are cool enough to handle, remove the top layer of the leek (the browned one that is very thin, it isn't soft enough to eat) and then lay the leeks along the base of the tin overlapping them. Fold over any overhang. Pour over the sauce mixture and then the cheese and butter. 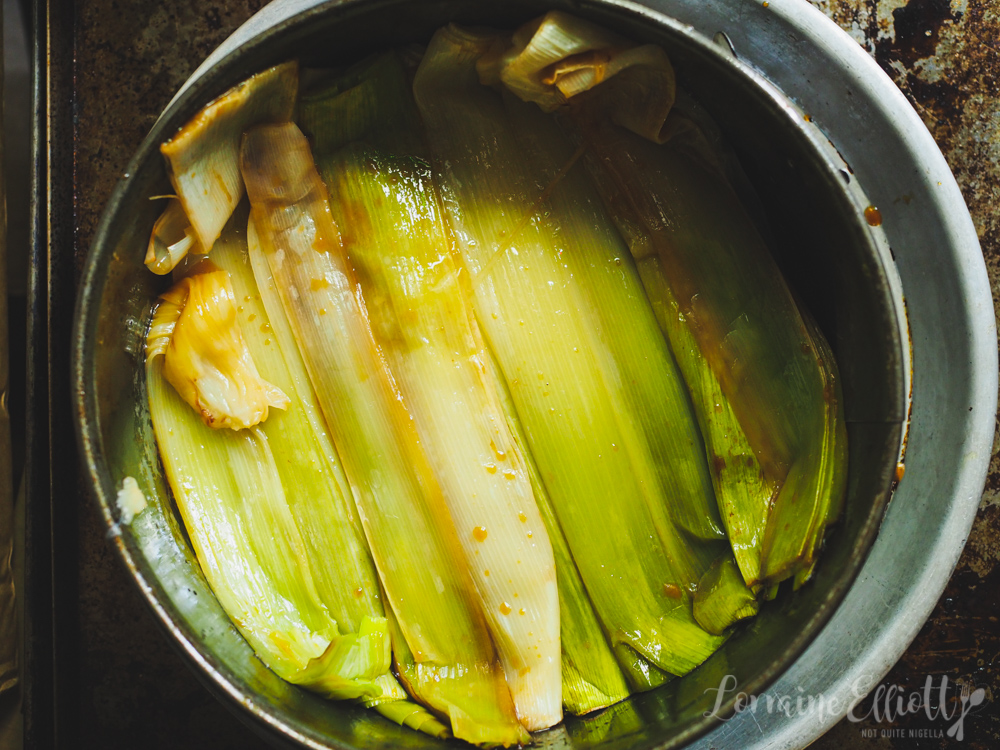 Layering the roasted leeks cut down down

Step 3 - Then add the puff pastry and fold over the corners. If the pastry is still cold then bake straight away, otherwise place the tin in the fridge for 30 minutes so that the pastry is very chilled to rise in the hot oven. Bake for 25 minutes until pastry is golden. Rest for 5 minutes then place the tin on a serving plate and upturn carefully. Remove the springform collar and base and season with salt and pepper and serve. 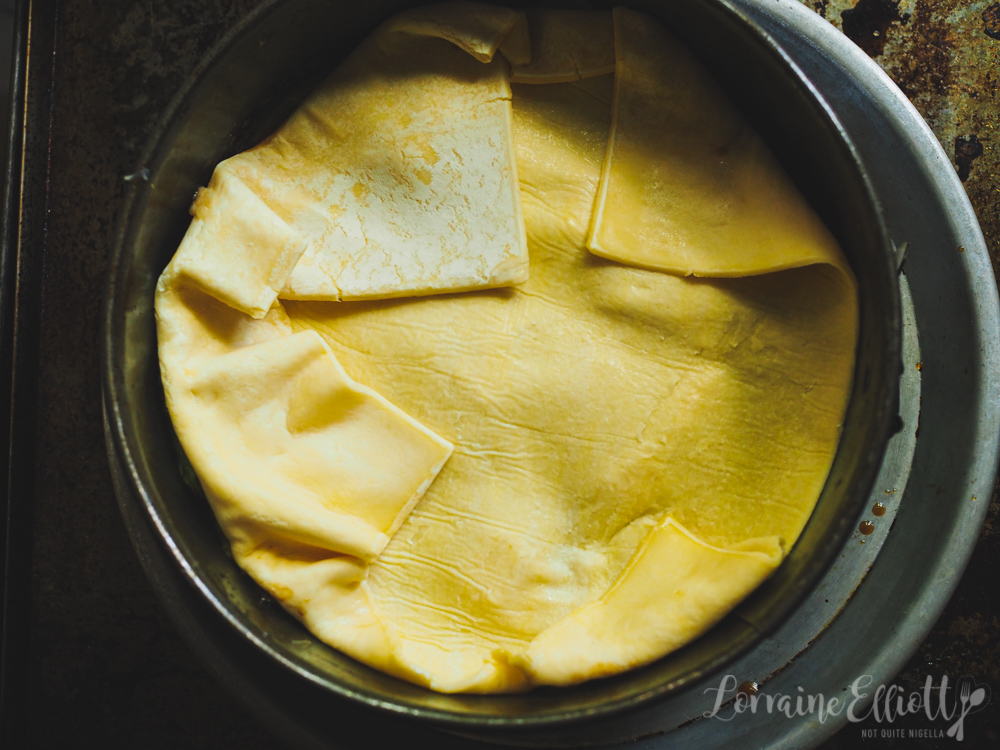 Adding the puff pastry on the top 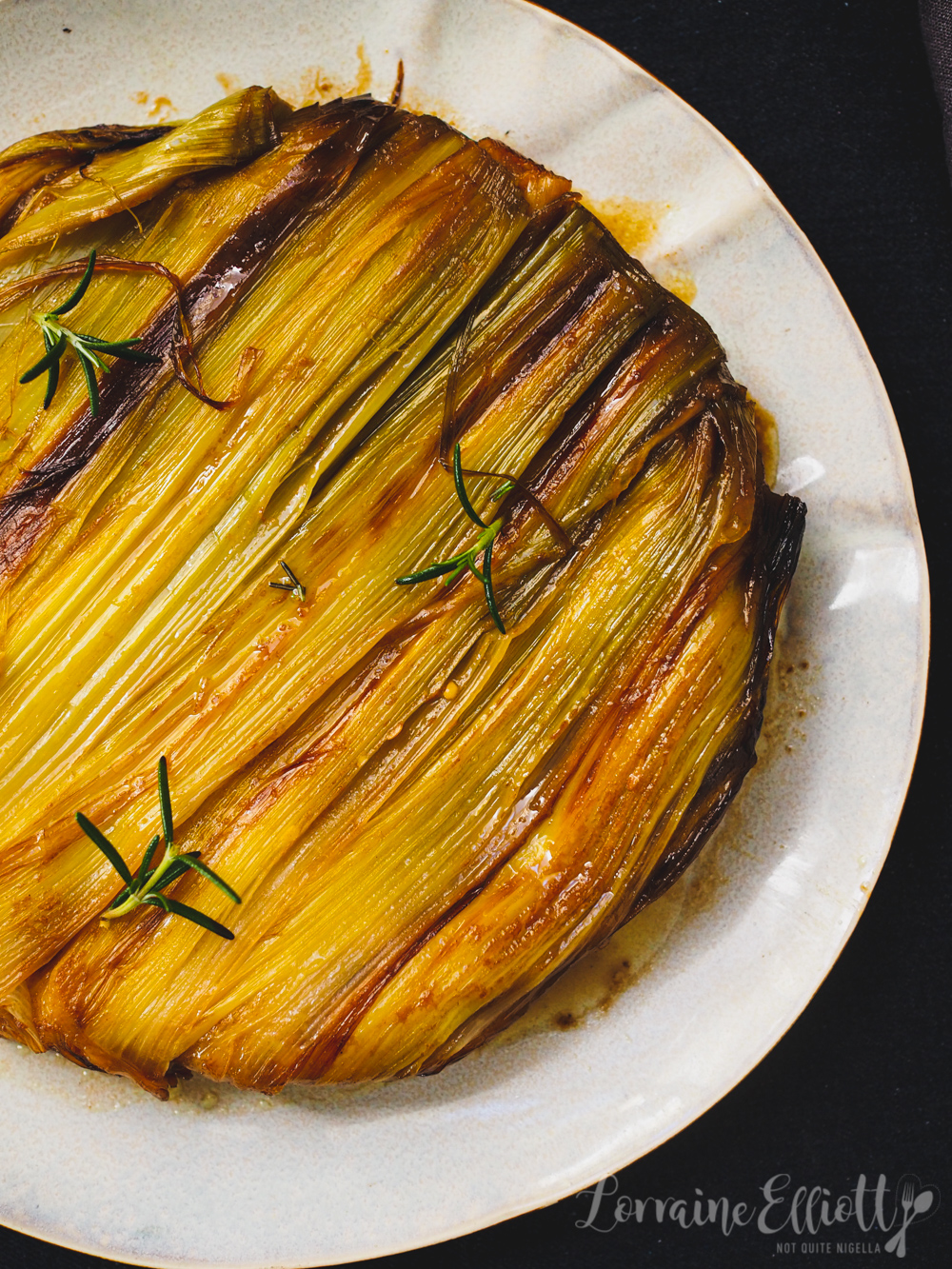