A Dessert for Summer and Winter: Pineapple Tarte Tatin! 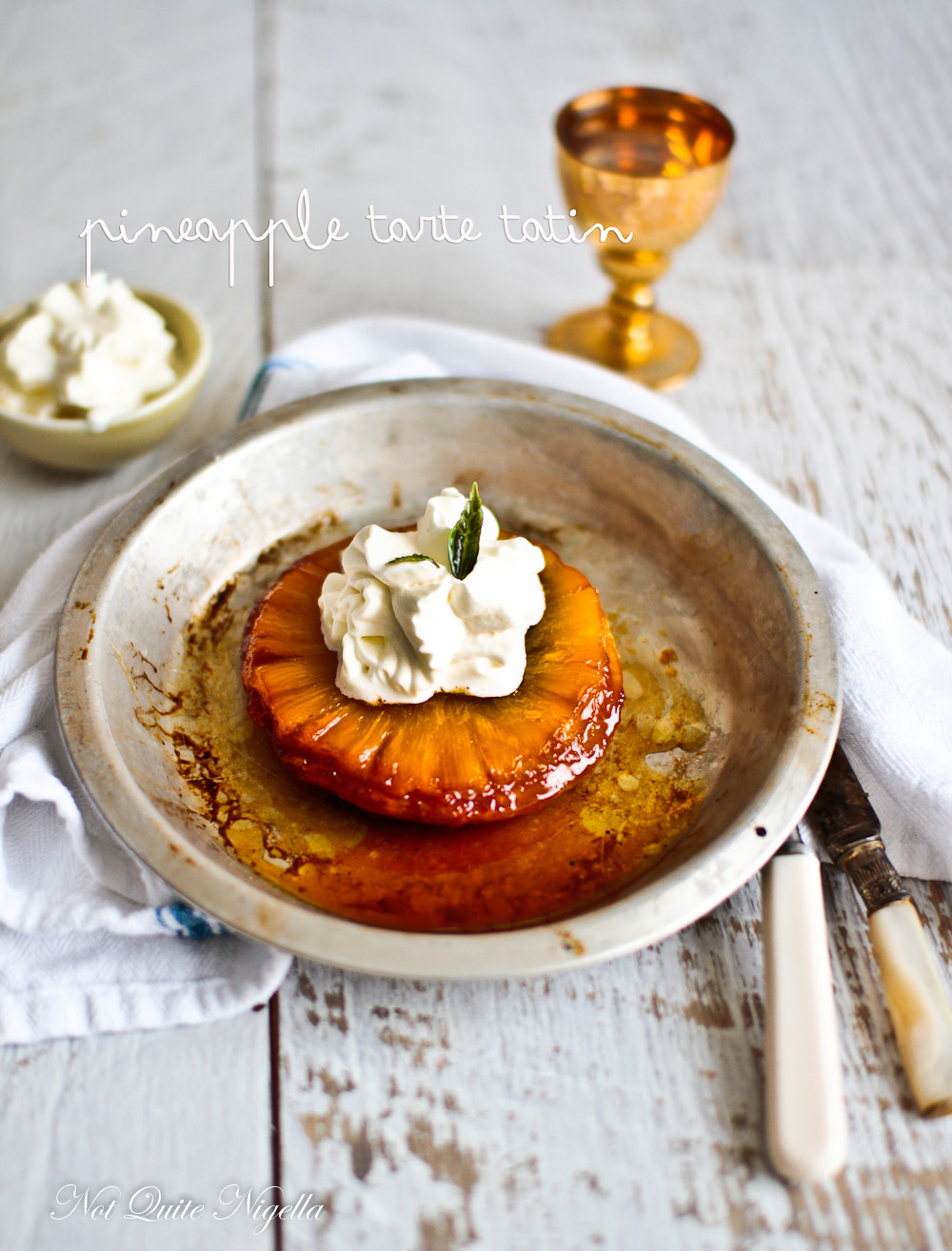 Ahh tarte tatin. Nothing says "welcome to winter" like a gorgeous baked buttery pastry but with half the planet experiencing summer I decided to make a tarte tatin for both hemispheres. Nothing could be easier than making these buttery gorgeous saucy tarts. For starters pineapple rings are perfect for an individual serve of tarte tatin. Plus they are even easier than apple tarte tatin as the fruit needs no cooking. Are you ready to impress?

Sometimes dishes have a bit of a reputation. I asked a friend recently if they wanted to make a tarte tatin and he recoiled physically and grimaced. "No way, that sounds way too hard!" he said and even put up his hands to ward off the very idea. But please allow me to argue my case-this dessert is swoon worthy and perfect for when you have guests. It's basically cutting up fruit, adding some caramel and cutting out a circle of pastry on top. When you pull the buttery smelling pastry and smell the sweet vanilla infused pineapple it is irresistible! 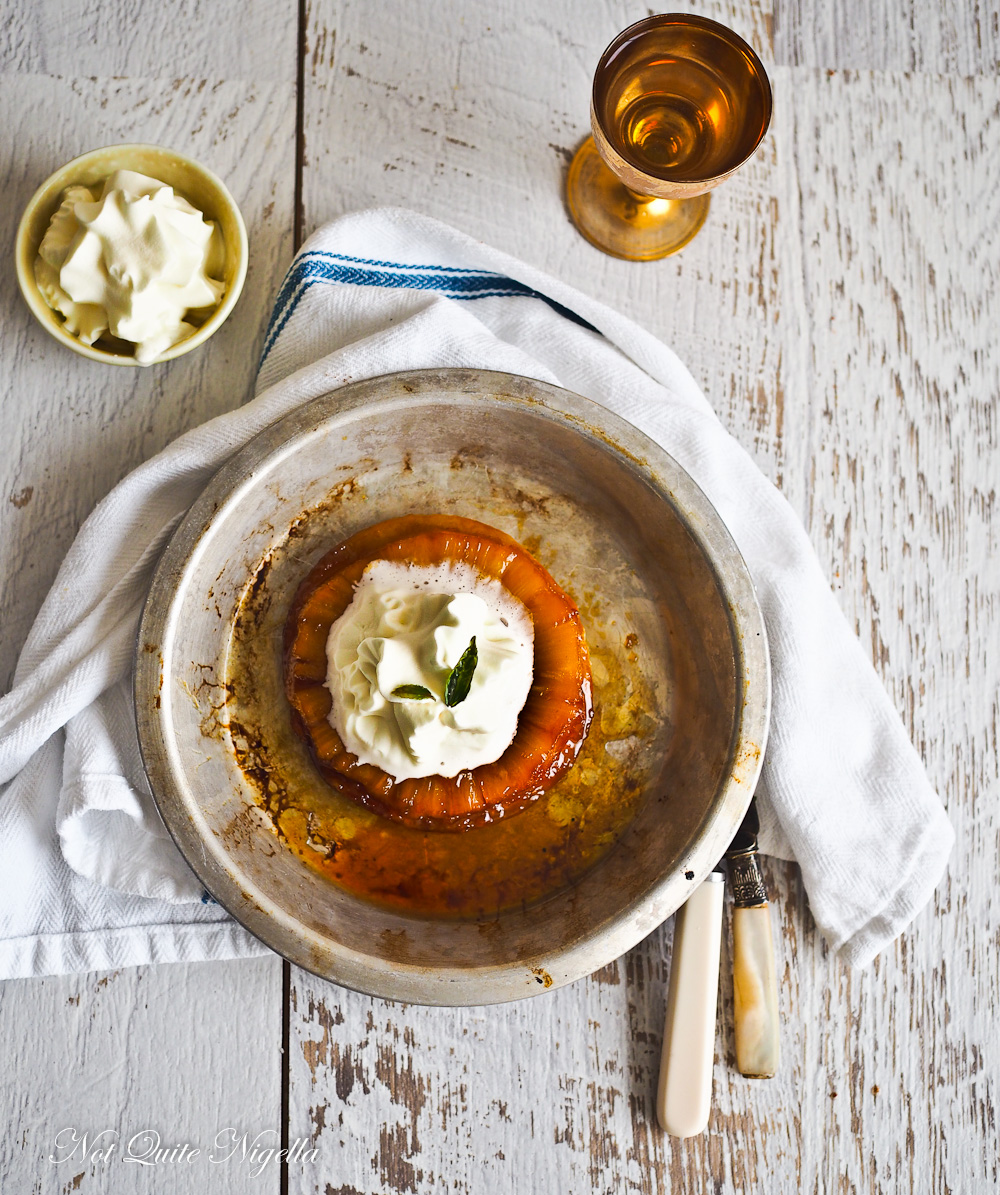 I have to admit that there are times in which I perhaps assume people have had cooking experience when they haven't. My trainer Nina is one of them. Every year we make each other birthday cakes. We even do requests and when Nina asked me what kind of cake I wanted I gave her free reign for the flavour (big mistake! Huge!) and my only request was if it could look like a Pomeranian dog. Nina's efforts thus far have been really good. She made a pug cake and a turtle cake for me and they've been adorable.

On the day that she was making them she messaged me. She asked whether regular salt would be ok instead of kosher salt and what cornstarch was. I thought that they were reasonable questions as she was obviously using an American recipe.

Then she sent me a picture of a green flecked batter. 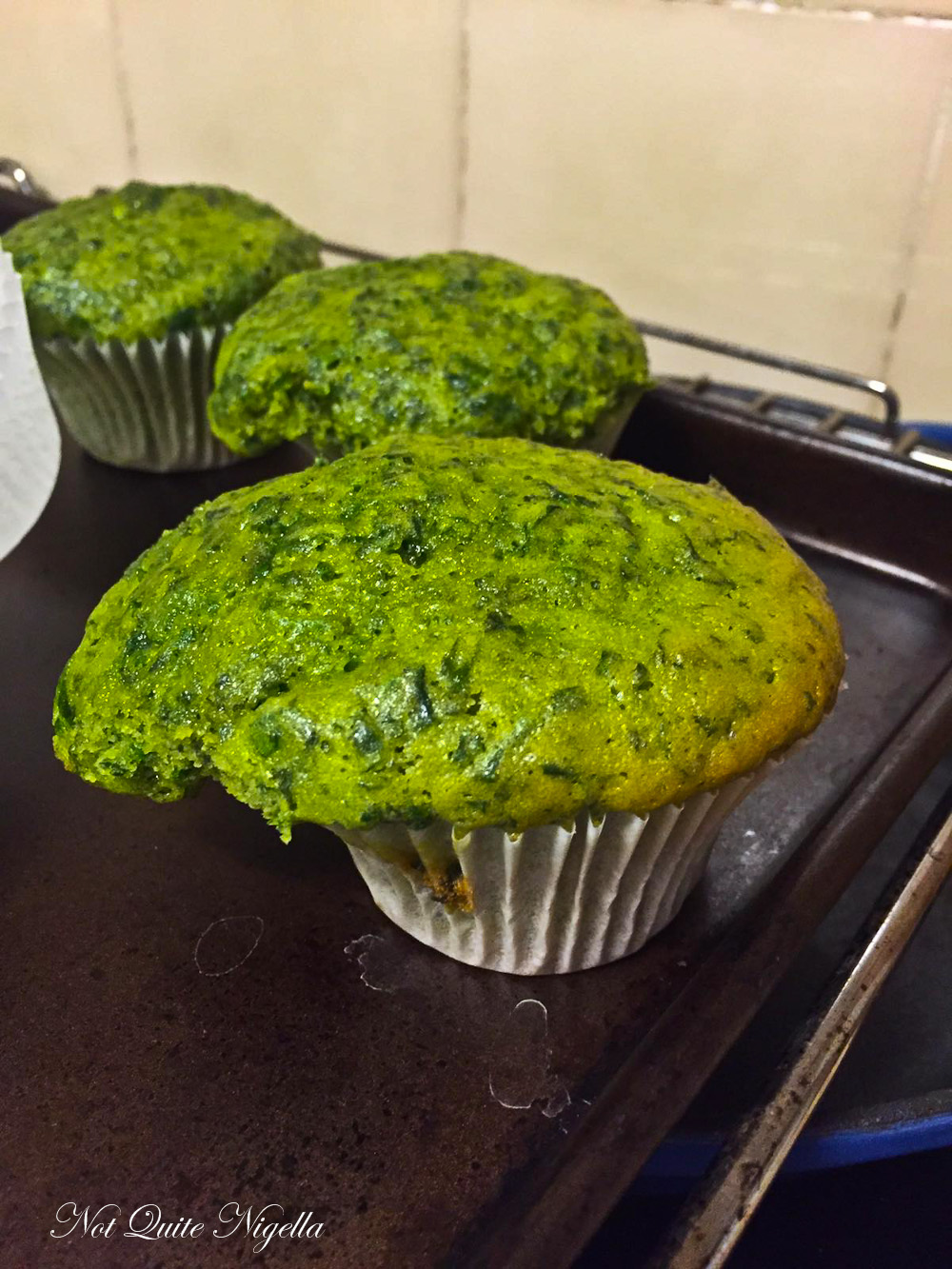 Then an hour later she sent me another message. She was miffed that the recipe hadn't specified how high to fill the cupcakes so she filled them to the top and they had overflowed. Then the icing had melted because Nina had iced them while they were hot. She sent me some pictures and I felt very sorry for her. In between laughing of course because by that stage she had turned to wine and we were both laughing pretty hard. 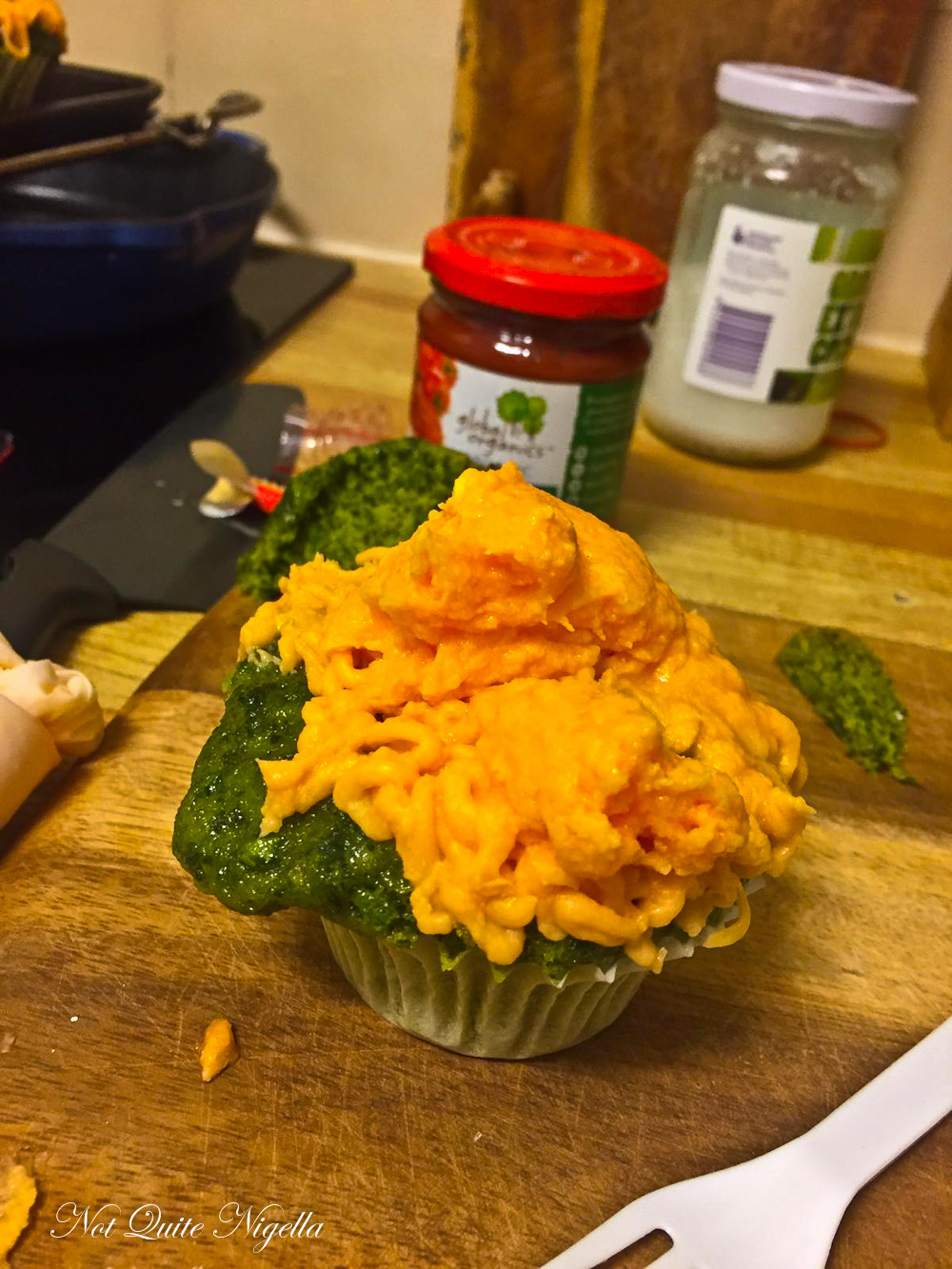 Cupcakes iced while they were still warm

In the 24 hours between when she made them and when she gave them to me she regrouped Dear Readers because the cupcakes looked awesome. Although she kept telling me that they were really ugly they were brilliant. Take a peek here to see her handiwork. And as for the flavour? Well this is the bit where I advise you never to let a personal trainer decide on a cake flavour. Because they were...drumroll! 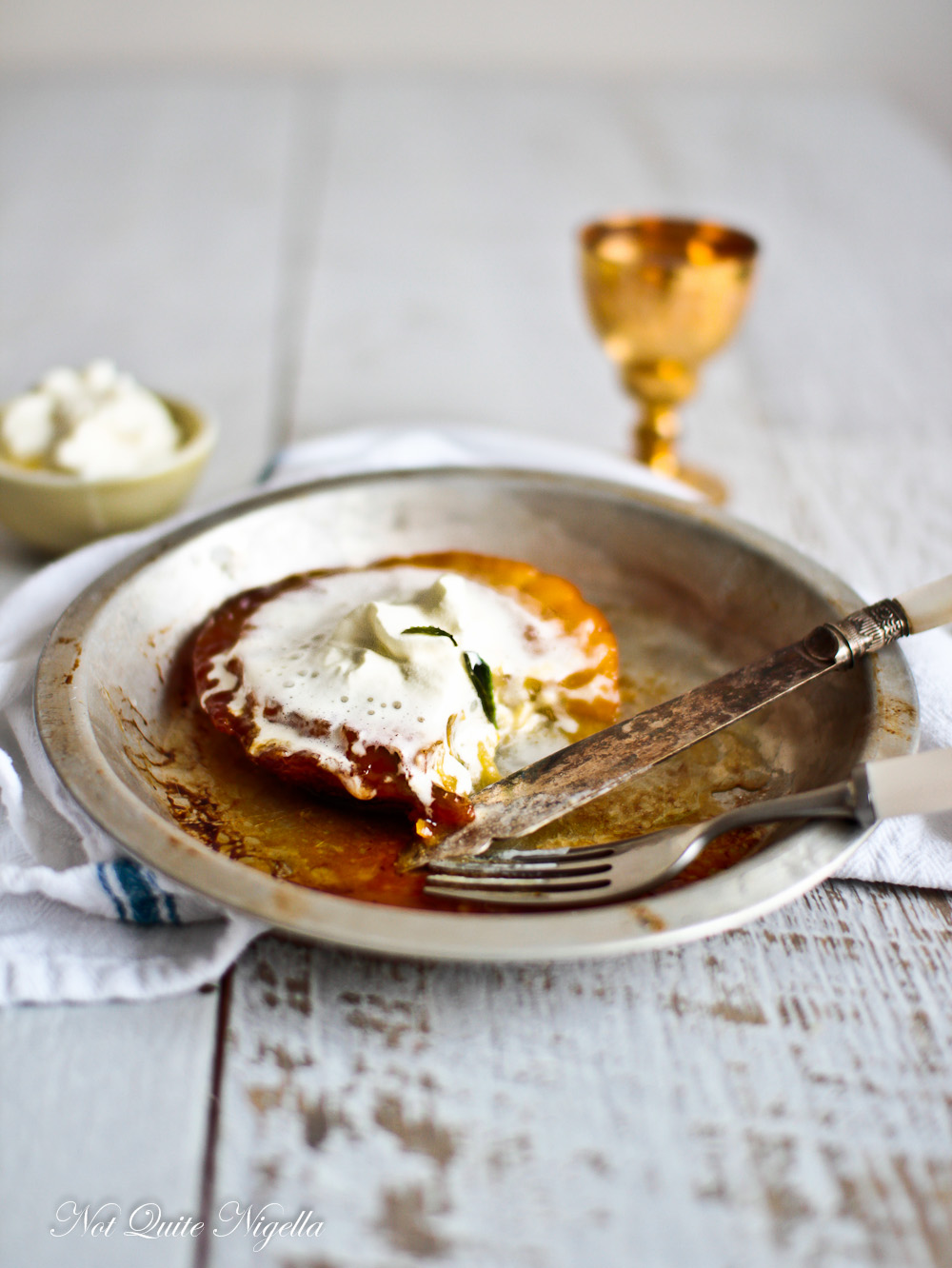 I have to admit that they were actually quite nice-weird but nice. And it's fresh and quite nice but definitely odd. But Nice. Also your brain keeps telling you that it should be a savoury muffin but it's sweet!

Unlike this tarte tatin though. All your brain (or at least mine did) told me was to eat and keep eating it!

So tell me Dear Reader, how would you describe your cooking level? And what sort of weather are you experiencing currently? Have you ever tried parsley and mint in a cake? 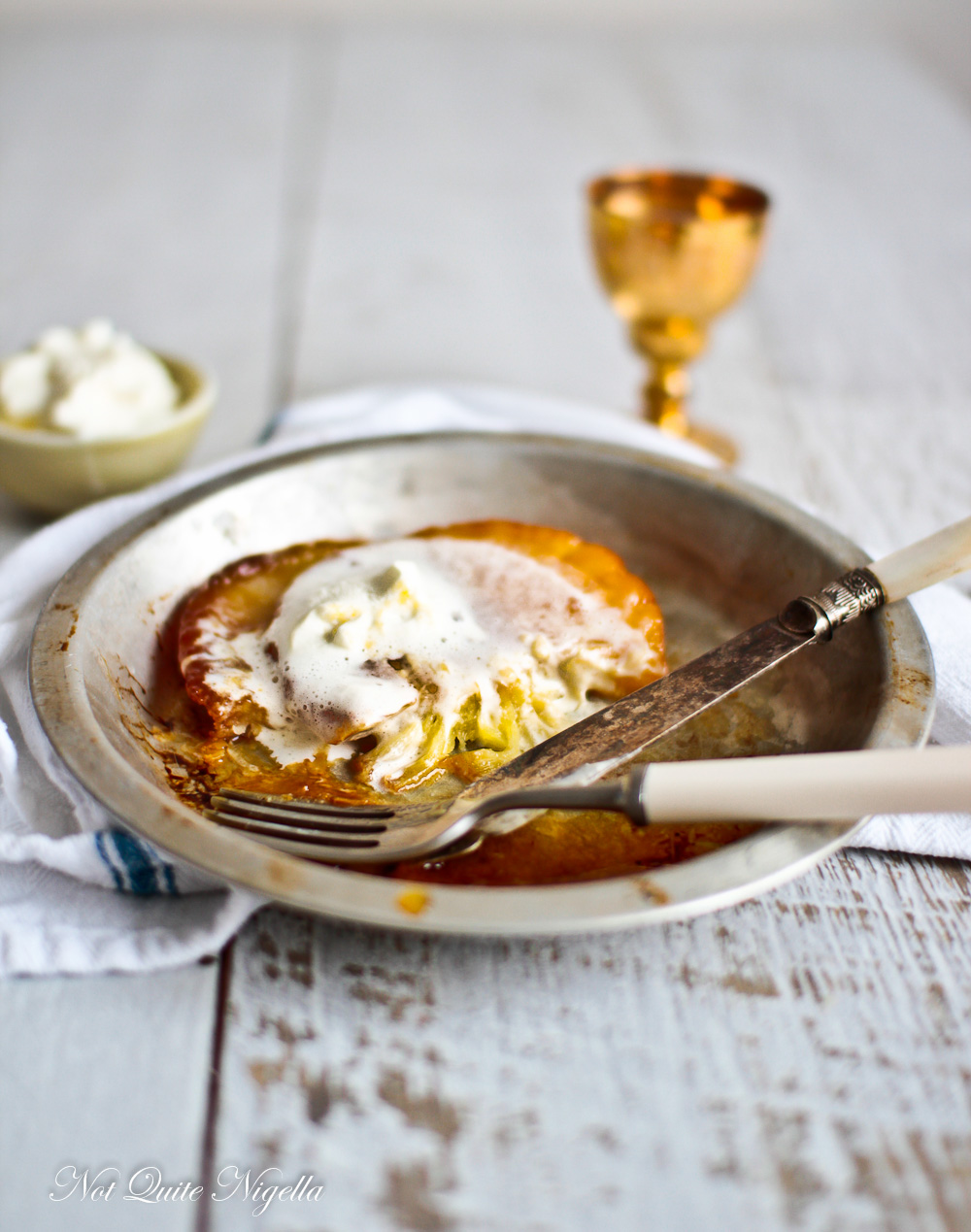 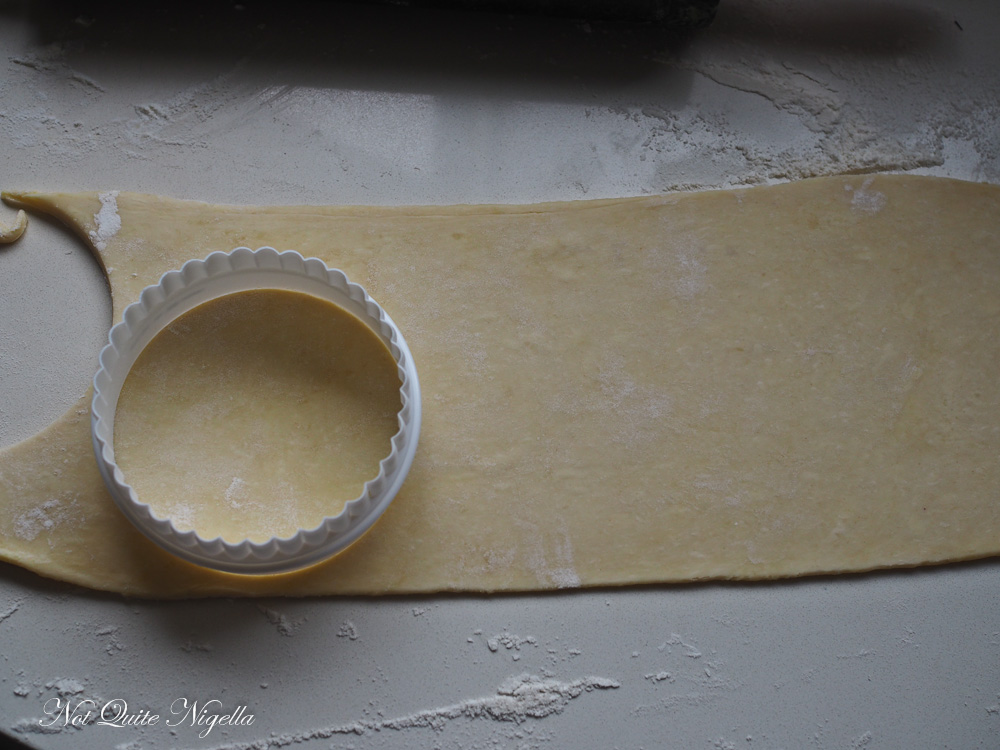 Step 1 - Preheat oven to 200C/400F. Line 6 pie plates with a round piece of parchment to cover the base. Roll out the puff pastry on a clean, floured surface. Cut out 10cm/2.5 inch circles out of the puff pastry. Place in the fridge until needed. 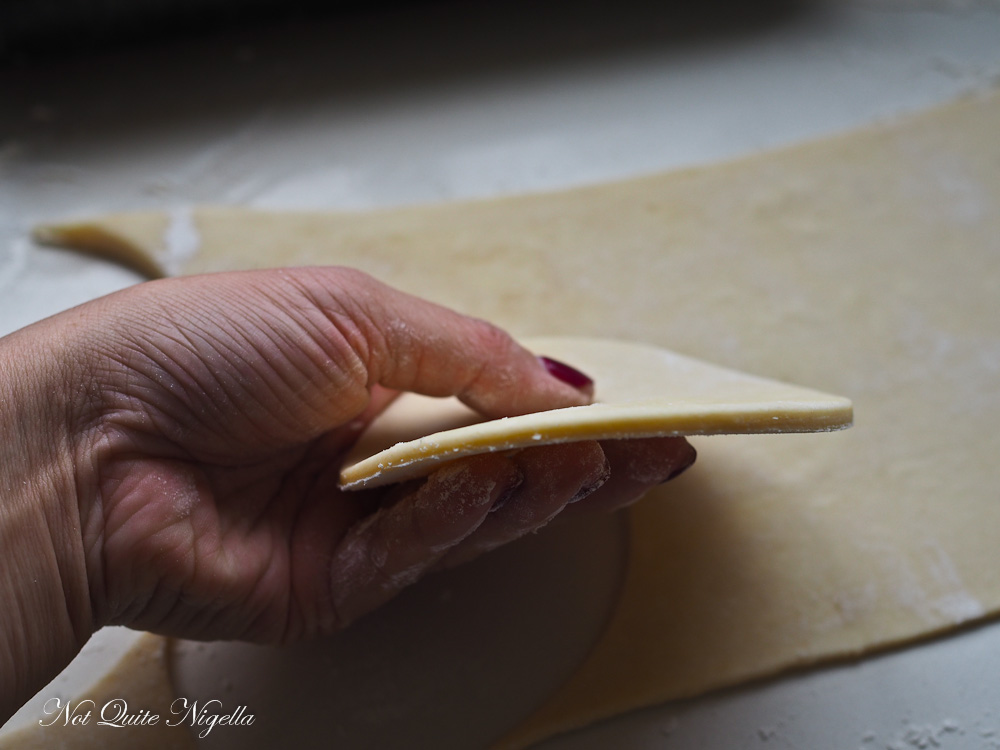 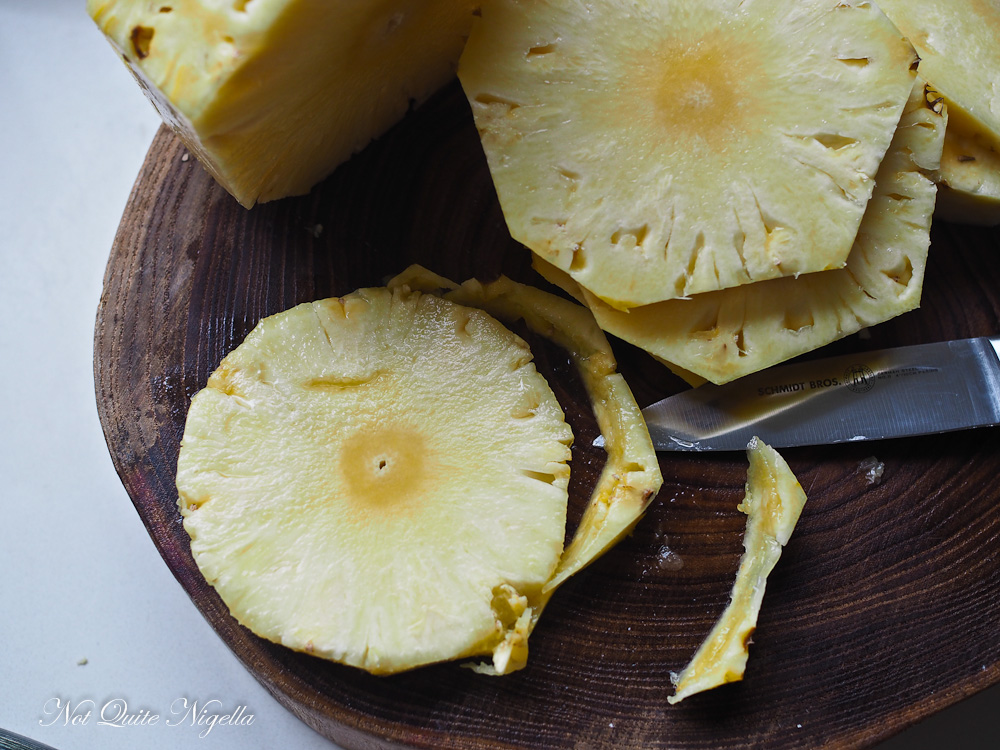 Step 3 - Add the sugar and water to a heavy bottomed saucepan and heat on medium high heat. Allow it to become a caramel. It is easiest to just leave it to boil away rather than stir it as sugar crystals may inhibit the caramel from happening and can seize the sugar. When it is ready, divide the caramel among the six pie tins spooning about 2 tablespoons on top of the parchment (don't worry if it doesn't seem enough or if the caramel seems too thick, the pineapple will release juice and meld with the caramel to make a gorgeous sauce). 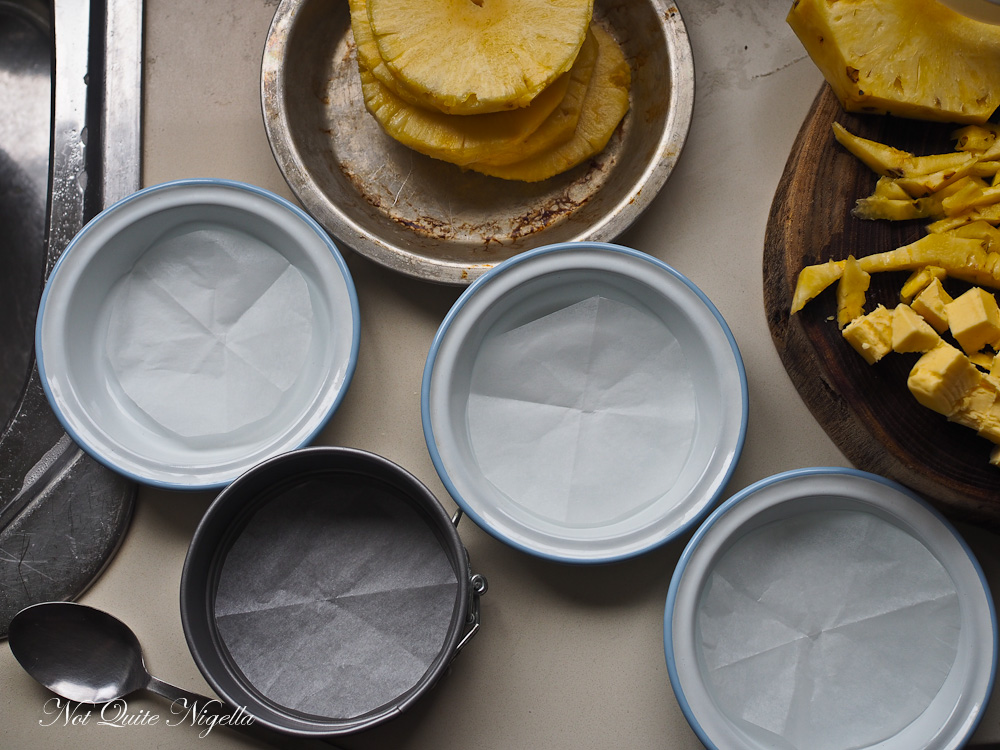 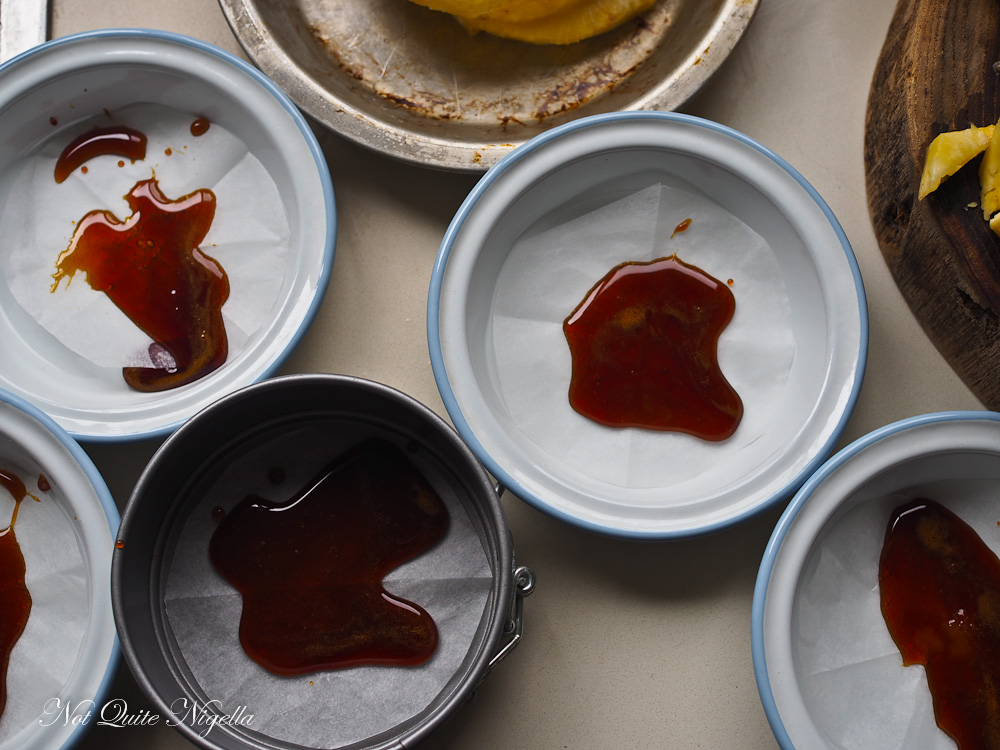 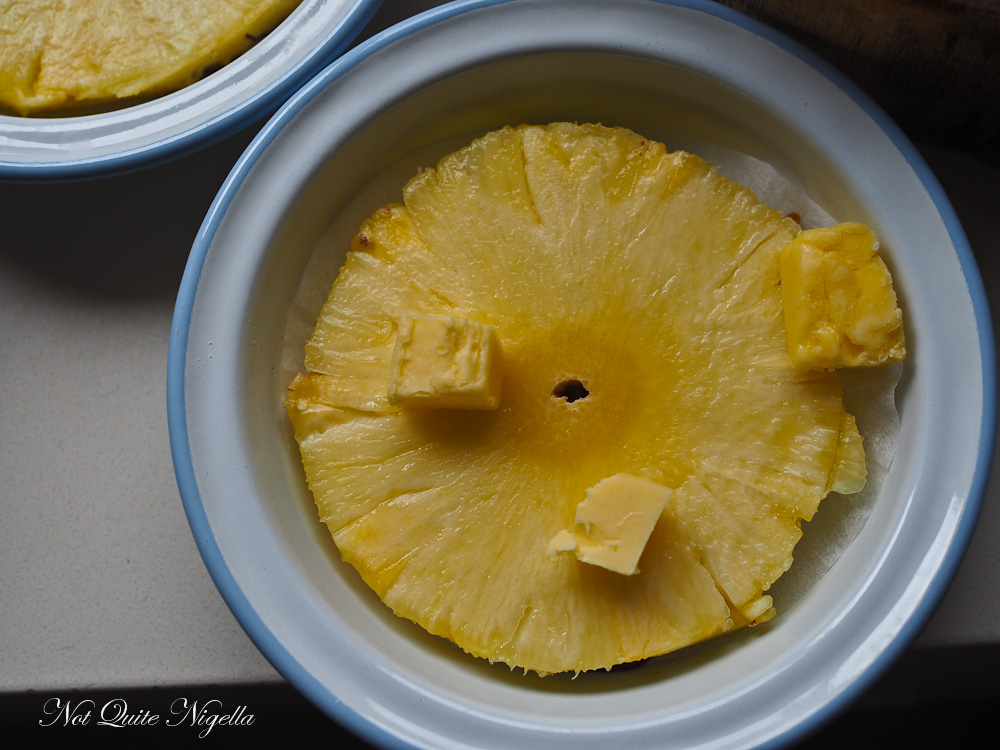 Place the pineapple ring on top of the caramel and scatter 2-3 small cubes of butter on top. Then place the puff pastry circle on top. Bake for 20 minutes until pastry is golden. 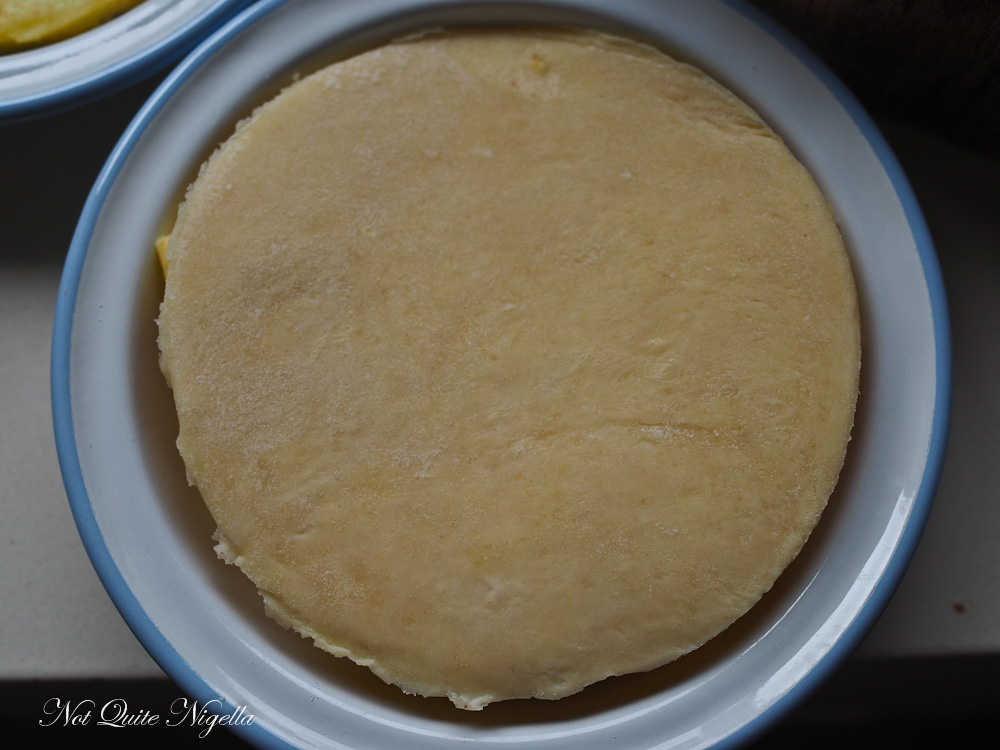 Step 4 - While it is still hot, upend it onto a plate along with all of the sauce. Serve with cream. 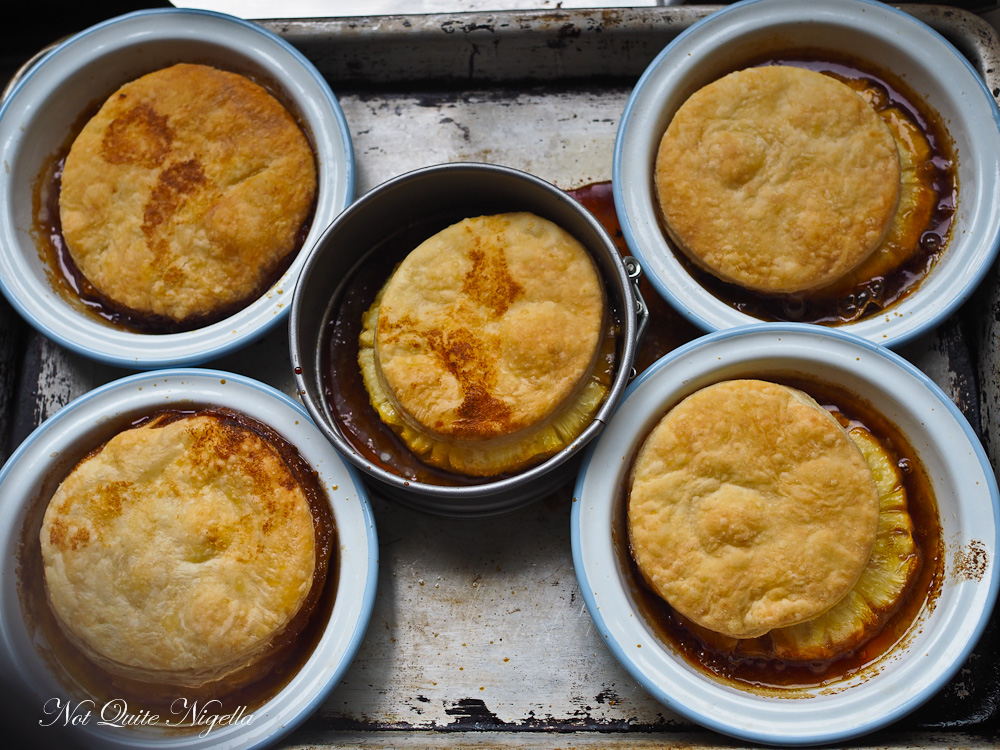