If you're lucky enough to visit Tetsuyas like I did for my birthday several years ago, unless you've access to a trust fund or a fabulous business expense account, visits are few and far between. In order to relive some of those heavenly taste sensations, a few years ago Tetsuya brought out a cookbook called aptly "Tetsuya" ($55 hardcover) that has recipes for all of his famous dishes (yes including the Confit of Petuna Ocean Trout!). This oyster dish (considered an extra course for an extra cost) was a favourite of mine for many reasons: I love Pacific Oysters and I love Ocean Trout and Salmon Roe.

Its easy enough and can be done ahead of time enough to serve at a dinner party and can make the most unaccomplished non cook an instant chef. In fact my husband who cooks on average once every two years made this without a fuss. I don't know how this compares to his prepackaged Tetsuyas for Oysters Vinaigrette ($11.95 from David Jones), its probably the same thing from the ingredients list but if you feel like making this yourself, its a cinch to do. What is pleasantly surprising to me is the relative simplicity of the dishes in his cookbook, I suppose in order to showcase the freshness of the ingredients. There are also plenty of beautiful photographs, food porn if ever I saw some.

I could happily eat this every day of my life although it goes without saying that its best enjoyed on a sunny Sydney day on a sunny balcony where we had this. 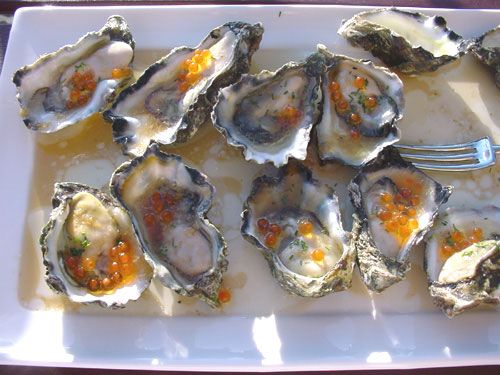 The vinaigrette can be adapted for any number of oysters and can be made ahead of time and kept in the refrigerator. Infuse 10cm konbu in a bottle of 750ml rice wine vinegar for added flavour

To make the vinaigrette, whisk together all the ingredients in a bowl or jar. Place some sea salt on the base of a serving plate. Put the oysters on top and spoon over the vinaigrette.

Sprinkle the oysters with chives and ocean trout roe

From Tetsuya by Tetsuya Wakuda