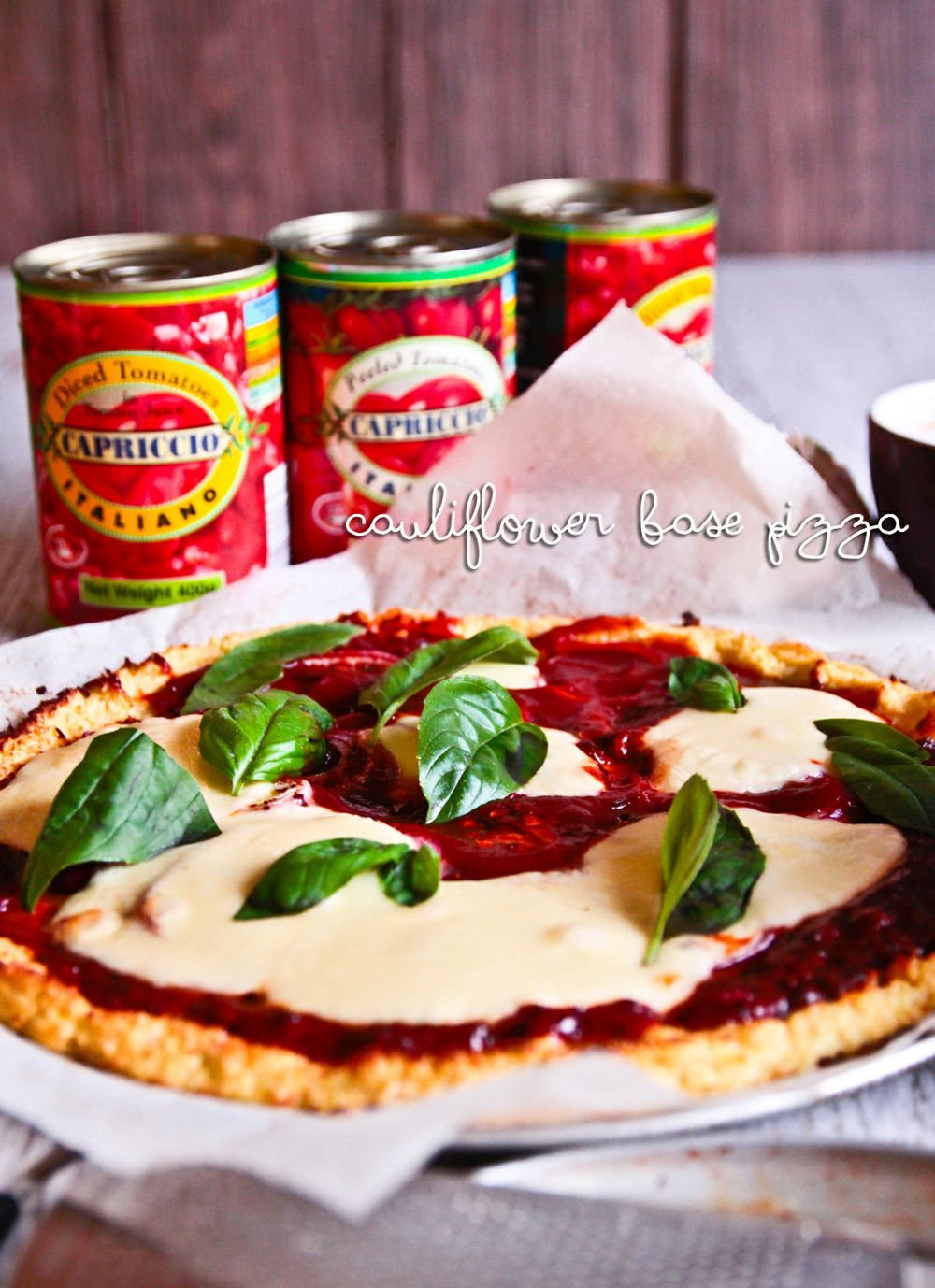 A few years ago Mr NQN and I were dining in one of Melbourne's best restaurants. Service there was exemplary in this lovely but rather dimly lit restaurant. Knowing Melbourne winters are bitterly cold at times so I brought along a faux fur muffler scarf. It was a light golden colour and while they took my coat, I left it on while warming up and then placed it on the chair next to me.

I went to the bathroom and came back where I found Mr NQN laughing uncontrollably. Apparently the waitress had thought that my fur scarf was some animal that had ventured into the restaurant and sat down on a chair opposite him! She was so shocked that she did a triple take of my scarf on the seat and her body language was poised as if she were ready to deal with a wild animal. I laughed so hard that I cried. In my time I've only seen dogs sitting outdoors at cafes and the occasional seeing eye dog. A ferret or wild badger on its very own seat would have been an eye opener and I had to give her points for keeping her cool. 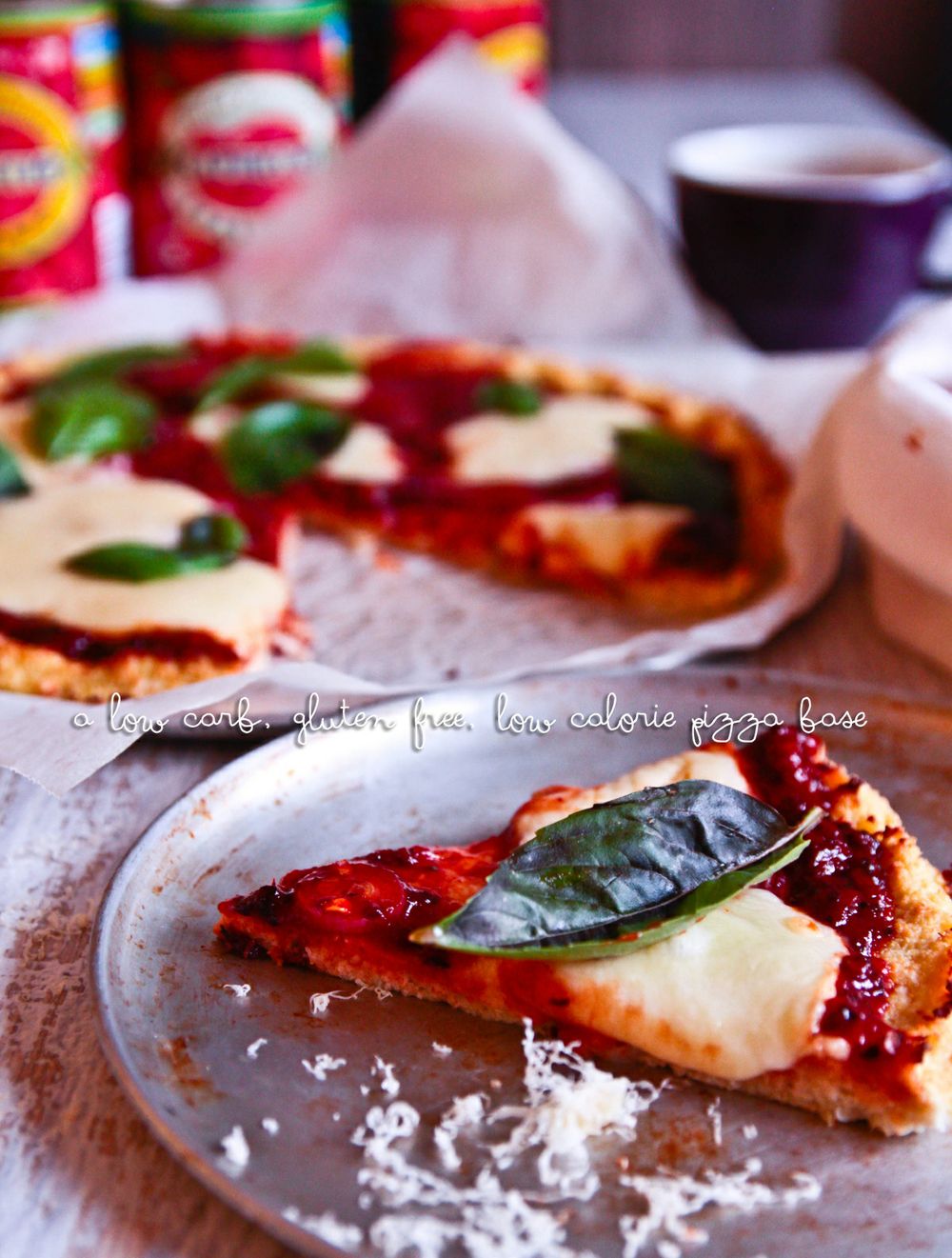 This pizza is also something that's not quite what it seems. I was first put onto this by my trainer Nina. You may have seen this around the internet lately with people trying to cut carbs and calories and increasing the amount of vegetables. I'm for all three especially when I am enjoying a couple of hot chocolates every evening so I had to give this a go. Instead of using a yeasted bread base for pizza, you use ground up cauliflower! I know, it sounds like madness and I must admit that I was incredibly skeptical so I didn't jump on it straight away. I also wasn't sure exactly how it would taste but as cauliflower is in season at the moment and enormous specimens are easily bought on the cheap I used half of the giant one I had in the fridge.

I cut off some florets, processed them into fine crumbs and then steamed them. After that I squeezed the excess water out and pat them into the shape of a round 30cm/12 inch base and baked it for 18 minutes. What resulted was a surprise, it was a thin crusted base that I could pick up just like a regular pizza slice! Wasting no time, I added toppings, baked it for another 10 minutes and eagerly tasted some. 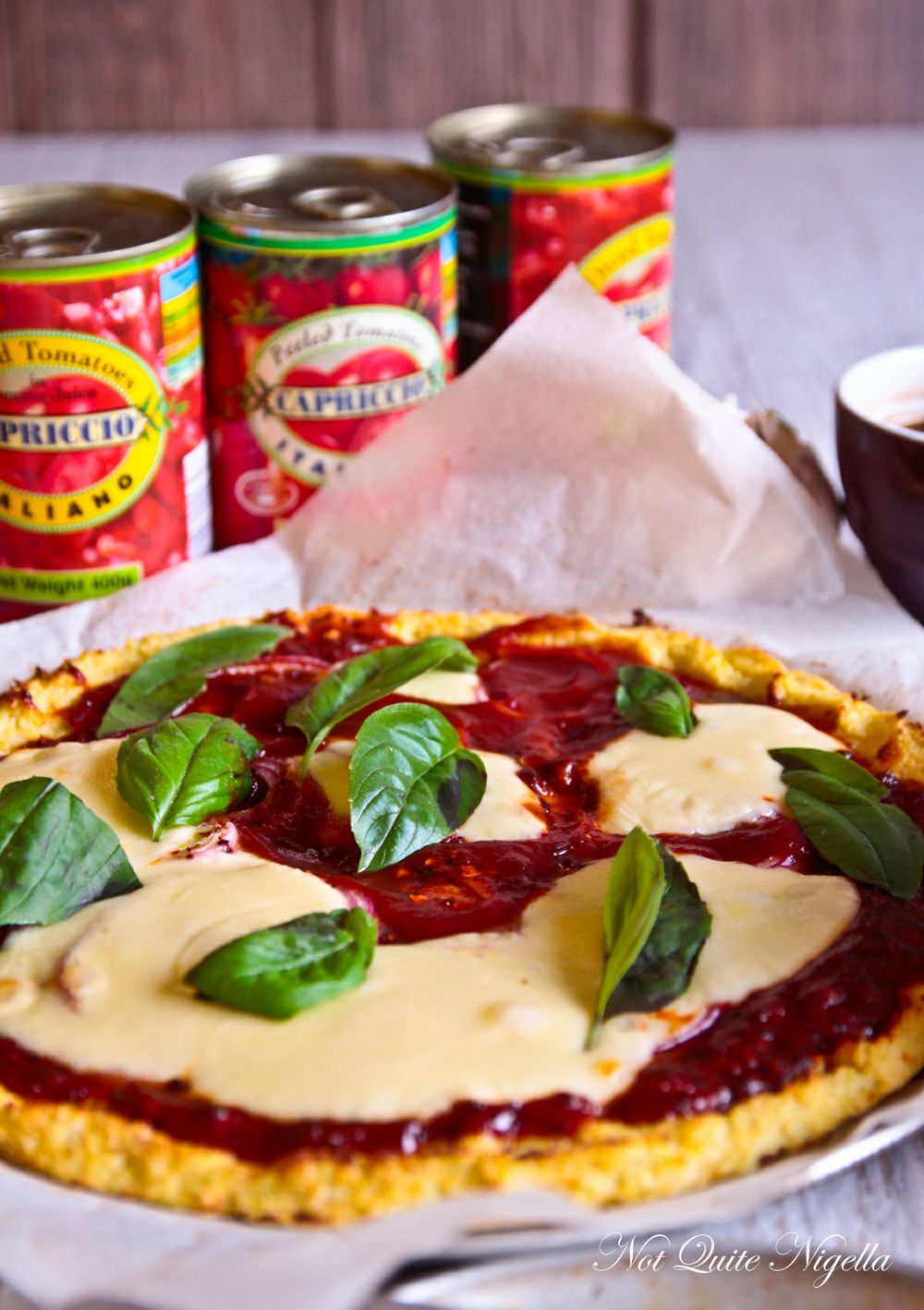 It wasn't too bad at all, in fact it was really good! The base doesn't taste like cauliflower at all and it even has a little sweetness about it too. It is different from a wheat based crust but not in a bad way and I'm absolutely certain that you could feed it to vegetable phobic children or adults without them knowing that anything was amiss. I'd definitely urge people to make it and put their favourite toppings on it and after my first slice I couldn't stop thinking about it nor wait for 6pm which is my usual time and knowing that Mr NQN was going out with colleagues. So at 5pm as soon as 4:59pm turned 5pm I sat down to eat the rest of the pizza and then cooked him his own!

So tell me Dear Reader, would you try this recipe or do you think that low carb recipes sound a bit odd? And what are your favourite pizza toppings? 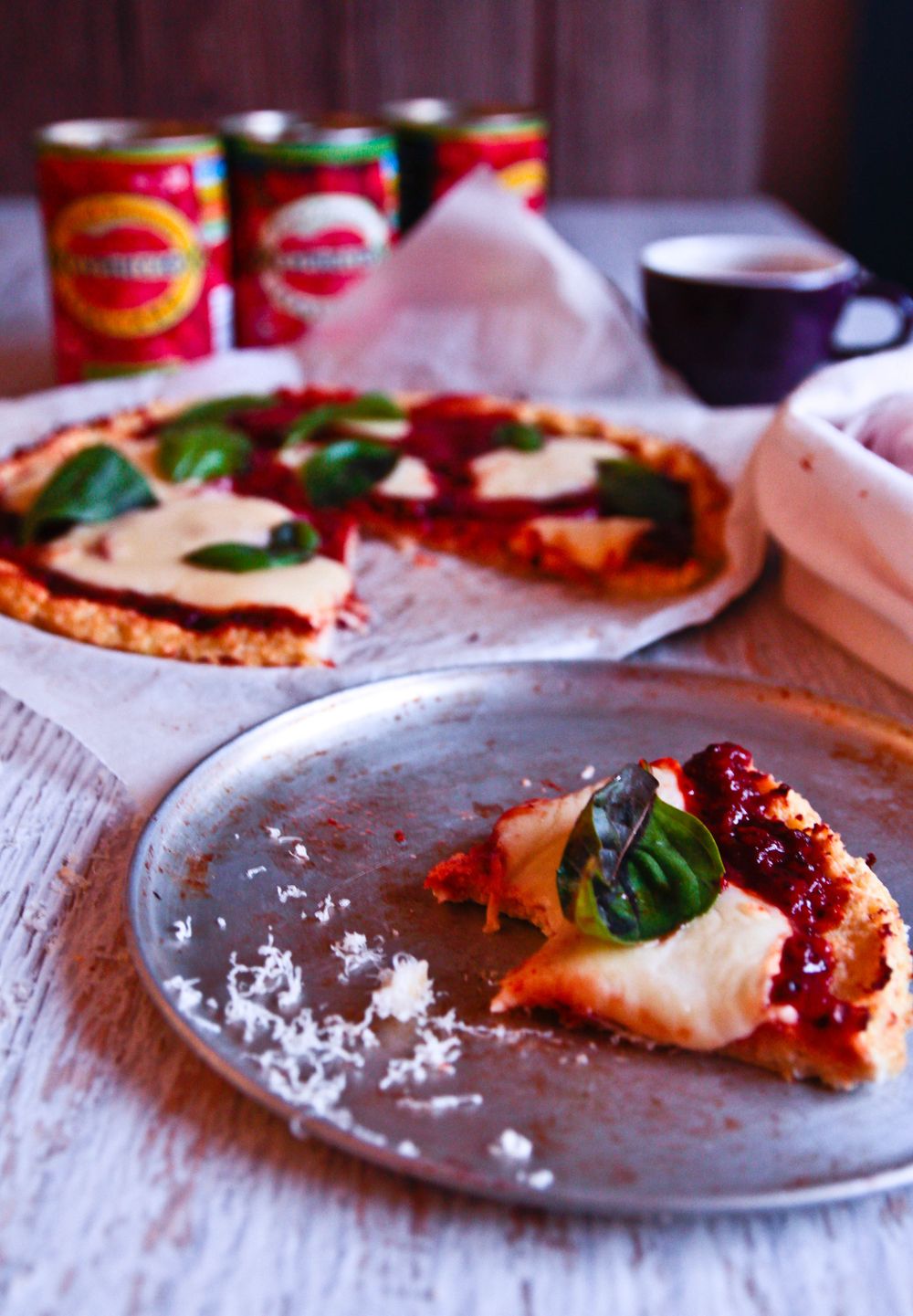 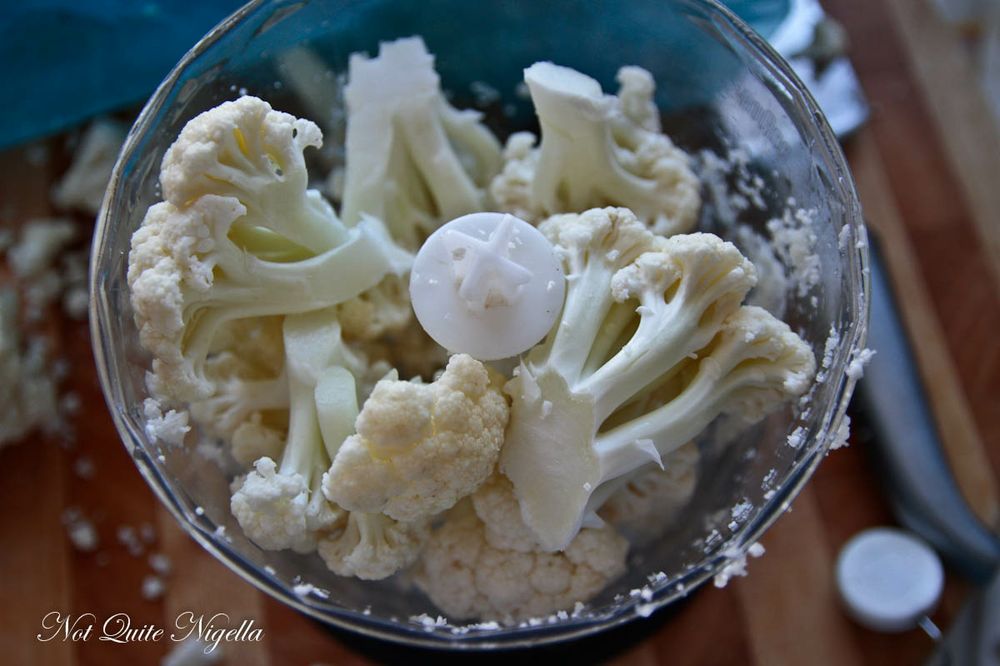 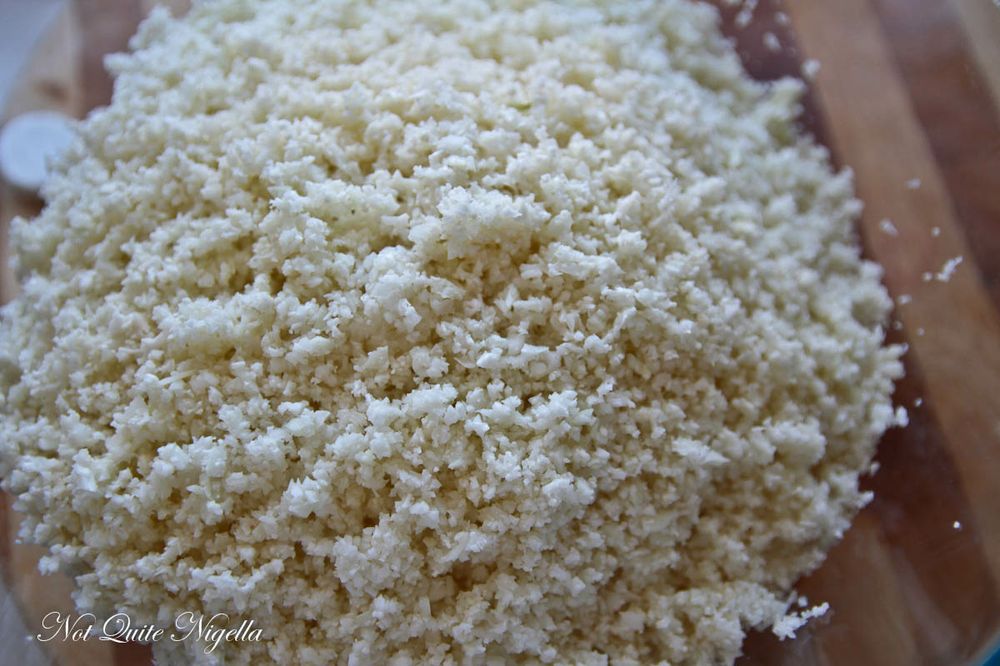 Step 1 - Preheat oven to 200C/400F. Line a 30cm/12 inch round pizza dish or a pizza stone with parchment. Wash and shake dry the cauliflower florets (the stem also works although the florets are easier to blend up) and process them in a good processor until you get 700grams or 25ozs. of fine, cauliflower bits. Without adding water or covering the bowl, microwave it for five minutes or steam it on a steamer. Cool for 10 minutes. 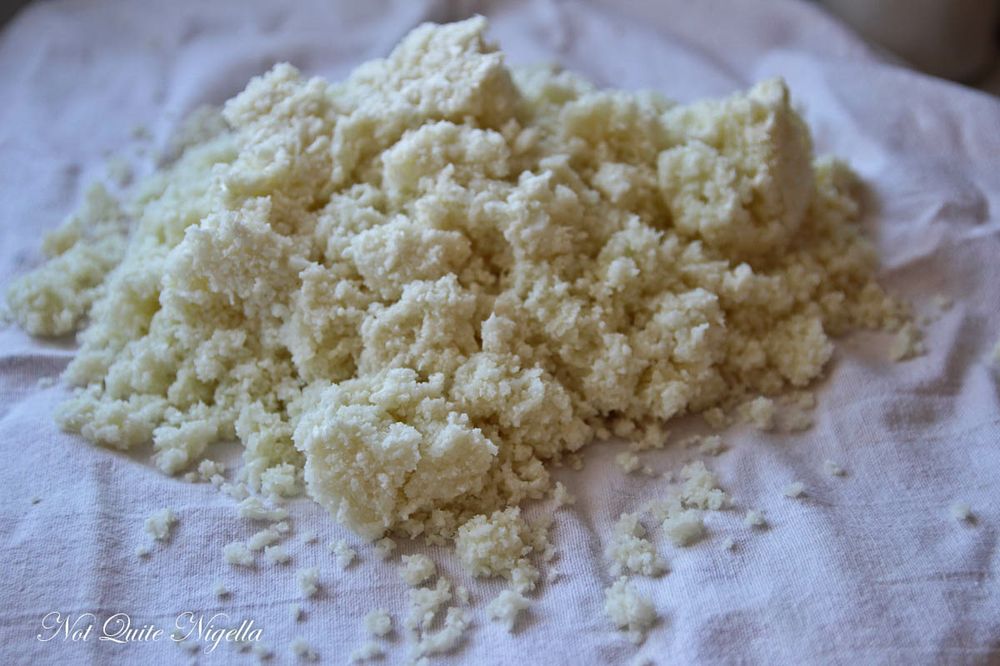 Step 2 - Empty the cooked cauliflower in a clean teatowel or in cheesecloth. Squeeze as much moisture out as you can as this helps get a good bread-like texture. There's a surprising amount of water in them and I got nearly a cup of water out. You don't have to remove every speck of moisture though. Clean the bowl that you used before and empty the squeezed out cauliflower mix. 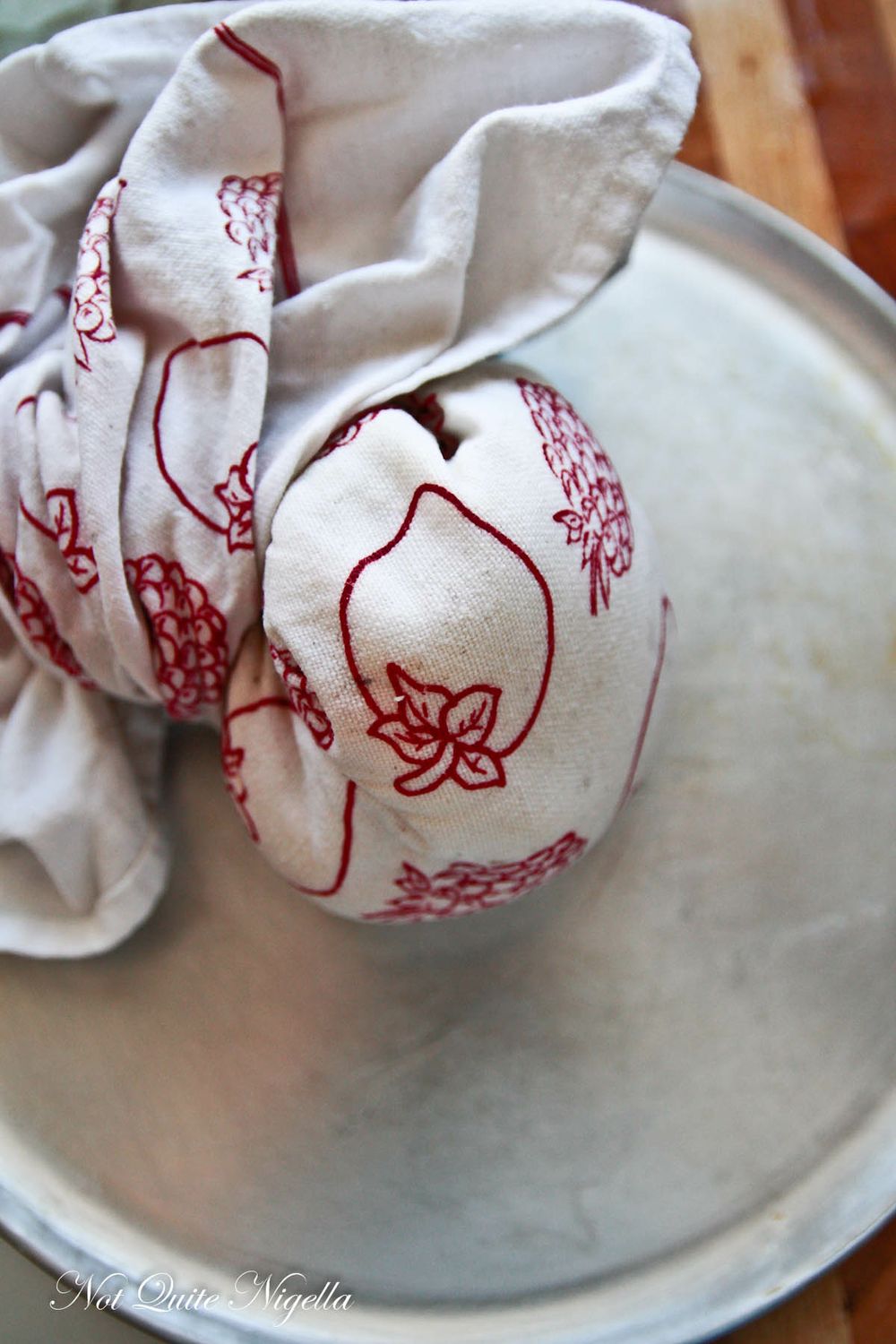 Squeezing the moisture out 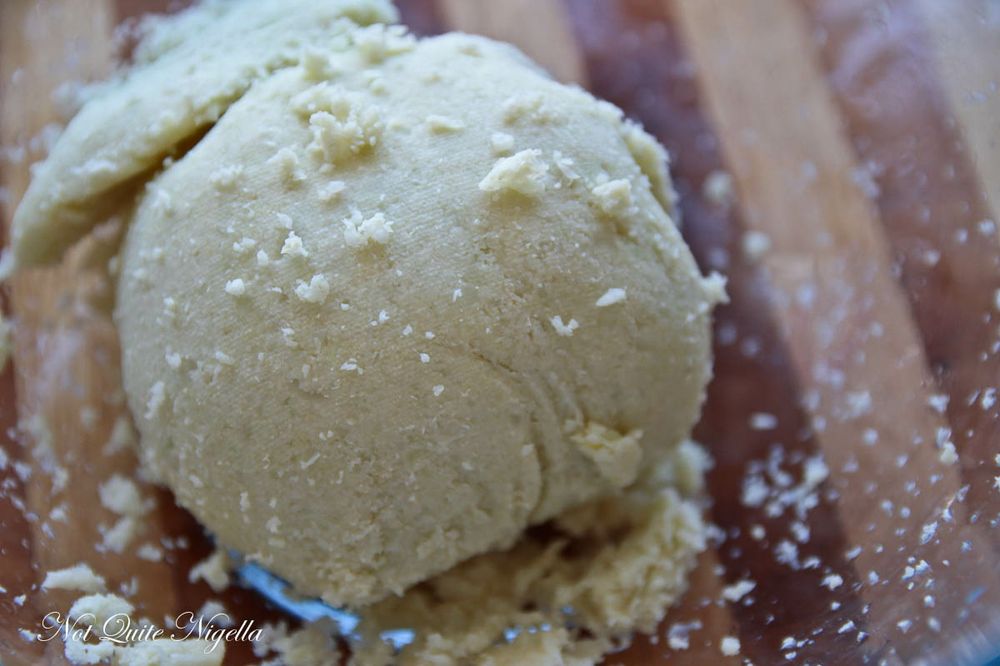 The squeezed out cauliflower 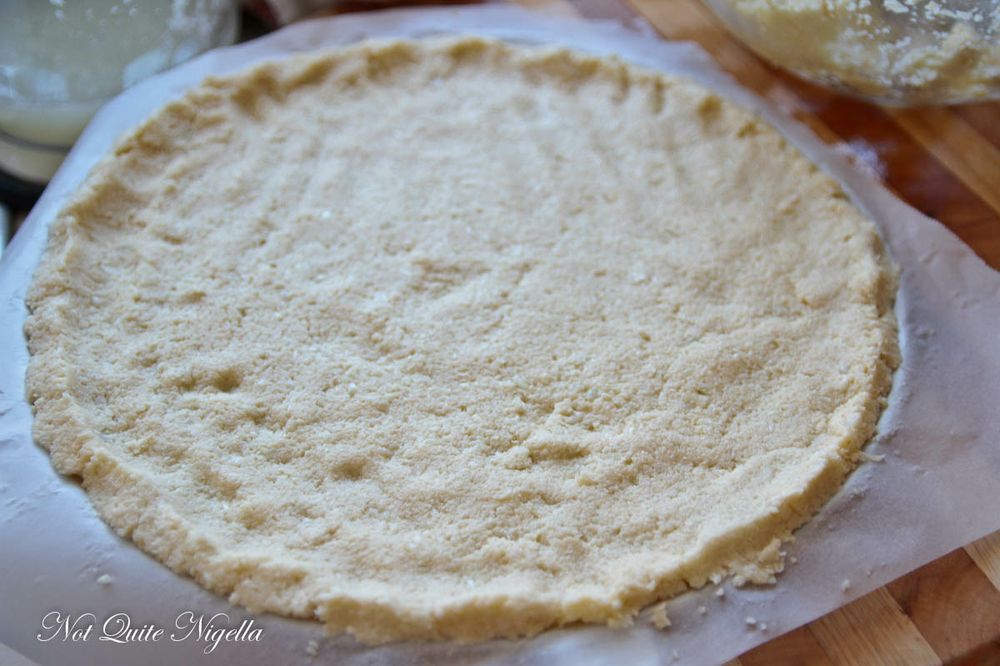 Pressed into a circle on parchment

Step 3 - Add the eggs and the ground almonds to the mixture and using hands mix to combine. I wanted it as circular as possible (it's my OCD) so I shaped the pizza dough on the parchment lined pizza base(and don't forget the parchment as it will stick). Shape the cauliflower mixture into a large ball and gently flatten it out spreading it to the edges. You can make the sides a bit higher too-you'll need to do this as the cauliflower dough doesn't rise. Slide the round base out from under the parchment and preheat it in the oven for 5-10 minutes until it is hot. Remove from oven and slide prepared pizza base on parchment paper onto the hot base and bake for 18 minutes. 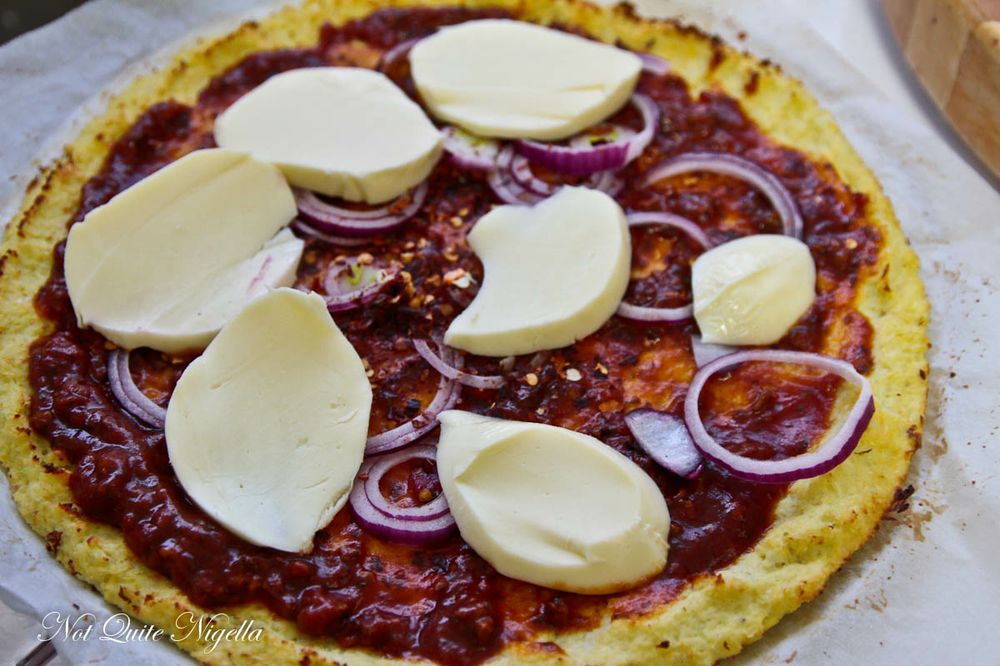 Step 4 - In the meantime, get your toppings ready and once the crust has had its 18 minutes and become golden and set, remove from the oven. Place toppings on pizza and bake for a further 10 minutes or so.