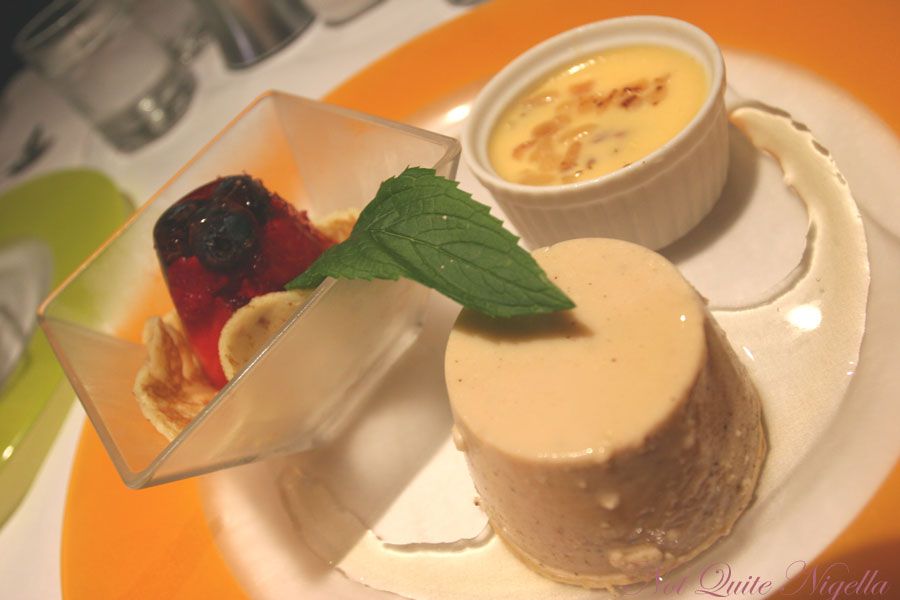 This year's Sugar Hits have met with some mixed reviews running the gamut from "horrible" to "heavenly". In particular the comments on the Radisson's Sugar Hit ranged from "awful" to "great". So its with some trepidation that we try their offering. As always, I am obsessing about the tasting plates versus the single dessert offering and find that I can't bring myself to look at the single dessert offerings as favourably as the tasting plates in some sort of odd way of getting value for money. Queen Viv doesn't like chocolate so we would have otherwise tried the Shangrila's chocolate lovers plate so the Radisson it is.

Its 9pm and we're already late for our booking. At 9.25pm we breathlessly enter the lobby of the Radisson asking the staff where the "One on 1 Brasserie" is. We're met with puzzled looks. "Oh that's at our _other _Radisson on Liverpool Street". Madre de dios! We schlep back down to the Spanish part of the city to find a small Radisson, one that we never knew existed before and the elusive One on 1 Brasserie. Its fairly packed by now at 9.45pm but as the receptionist at the other Radisson has called ahead to let them know of our directional problems (caused entirely by me), they've kindly held our table for us. 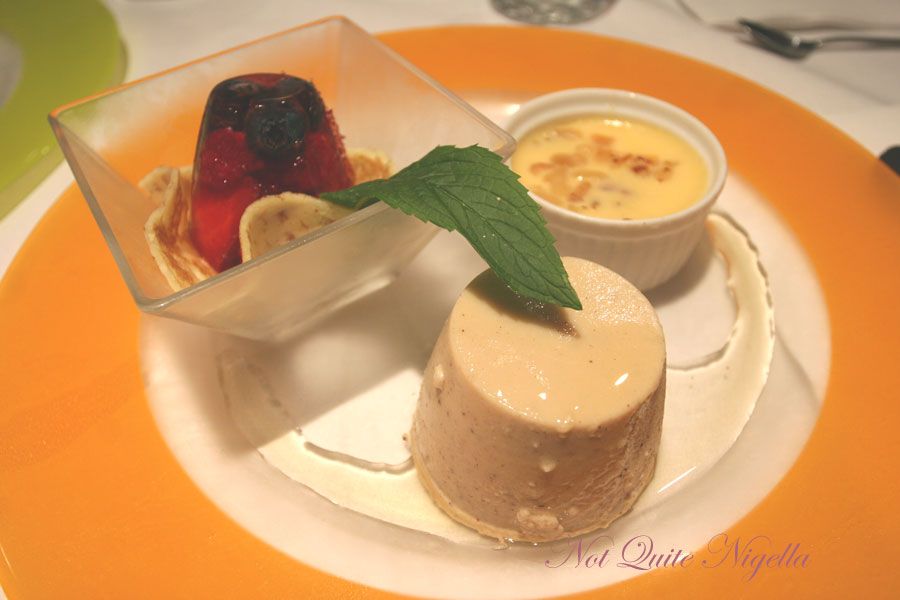 We've ordered the Heavenly Morsels - triple the tastesation with Roasted macadamia nut and Quandong Crème Brûlée, Mixed Berry Crêpe Stack & 5 Spice Panacotta with Palm Glaze. It arrives within a few minutes and is a pleasurable sight to behold with vivid raspberry reds atop a splayed lacey patterned crepe, contrasted with marble shaded panacotta and a blonde brulee. A glass on Brown Brothers Orange and Flora Muscat arrives and we're a touch disappointed as they've given us the tiniest of glasses, like those from a wine tasting, one glass being about 2/3 less full than the other. 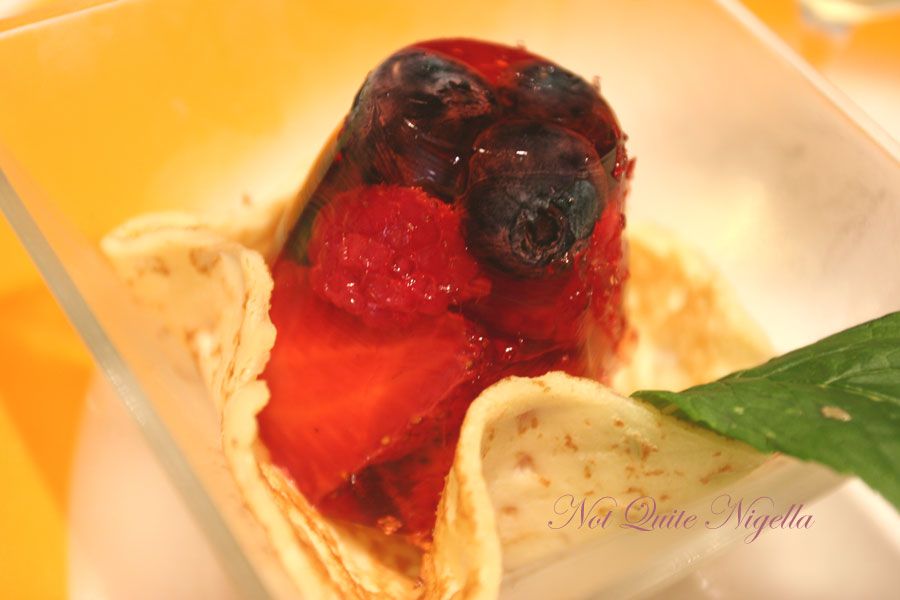 First we try the Crêpe with a mixed berry jelly mould atop garnished with a mint leaf. The berries are juicy and firm inside the strongly flavoured berry jelly. It probably doesn't need the crepe to balance the taste, it was we felt more for the overall splendour and look. My husband attacks this with vigour, he is clearly impressed with this. 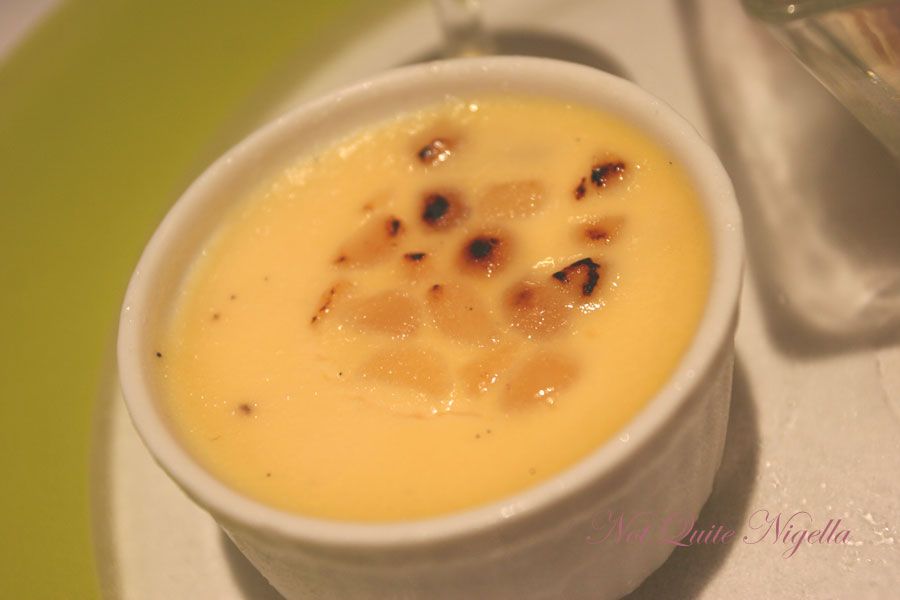 An untoffeed creme Brûlée with smatterings of lightly charred smashed macadamia nuts on top and slices of Quandong at the bottom is next and this is fantastic, clearly my favourite of the night, even without the toffee. In fact there is no attempt at toffee like at the Sheraton on the Park's version. The macadamia chunks sit proudly at the top whilst lurking undeneath lie the slices of Quandong, a plum-like slightly tart fruit with a fruit rind like or pear like texture. The Brûlée is rich, creamy and deep and surprisingly, its the size of a full sized Brûlée (unlike the Sheraton on the Park's shallower and smaller version) and every bite is savoured until the very end. 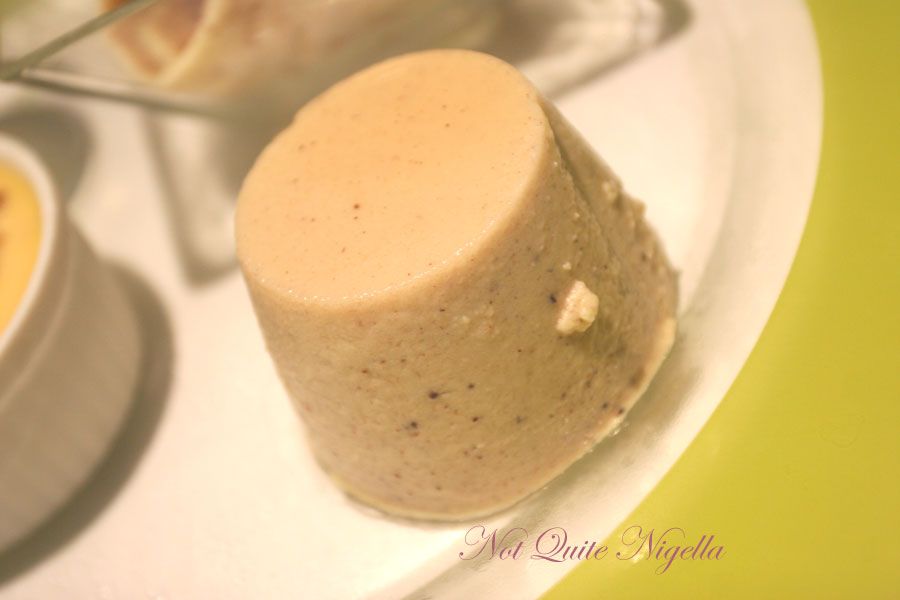 Lastly we try 5 spice panacotta with palm glaze. Panacotta is one of those desserts that is very easy and inexpensive to make yet impresses the most critical of guests. In short, its a dessert that works it bottom off for you as a chef! This one is Queen Viv's and Miss America's staunch favourite and it tastes like a chai latte version of a panacotta. I wondered why I had never thought or heard of it before, its ingenious and perfect if you love chai. Its texture is perfectly set with an ever so slight tremble when you put your spoon to it, every morsel a heady spice laden spoonful. 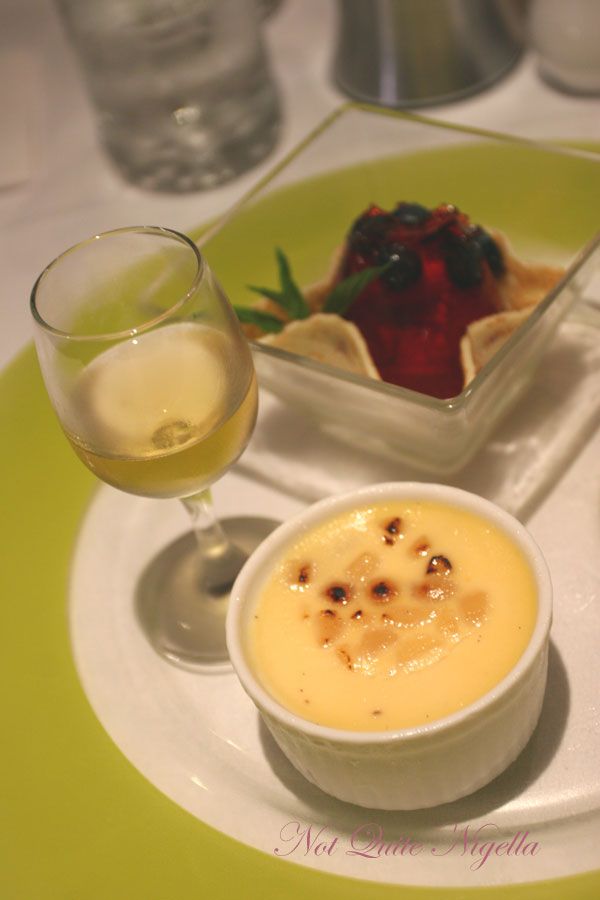 I do a quick Q&A around the table to ask everyone's opinions and even my food apathetic husband is nodding a resounding YES to the selection tonight. We had great service and its a much better and more complementary mix of flavours than the tasting plate at the Sheraton on the Park (although the atmosphere at the Gallery Tea Lounge can't be beaten). Its well worth the $20 (but a little more Brown Brothers wine wouldn't hurt!). 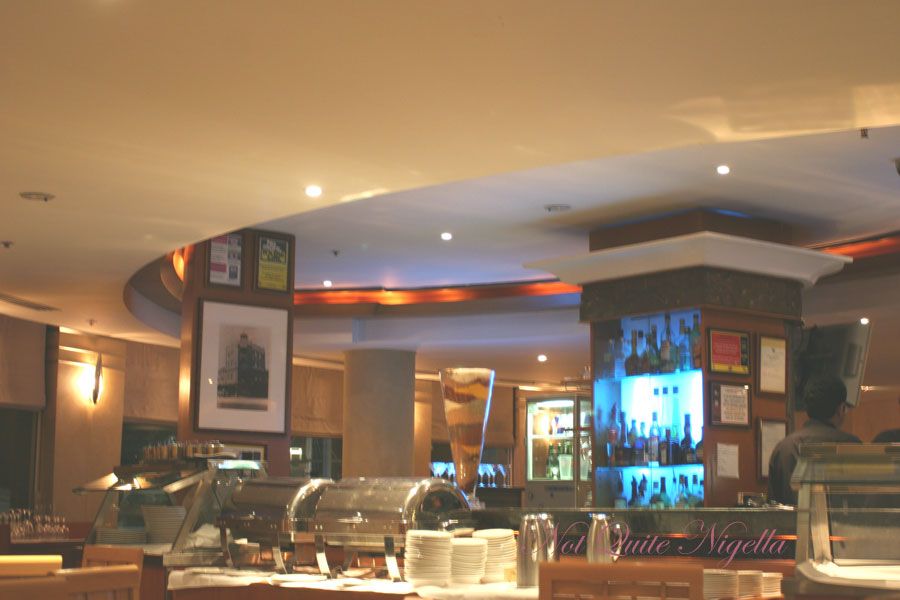 On every day throughout October rfom 9pm-11pm.

P.S. Miss America had a comment to make as a satisfied customer! 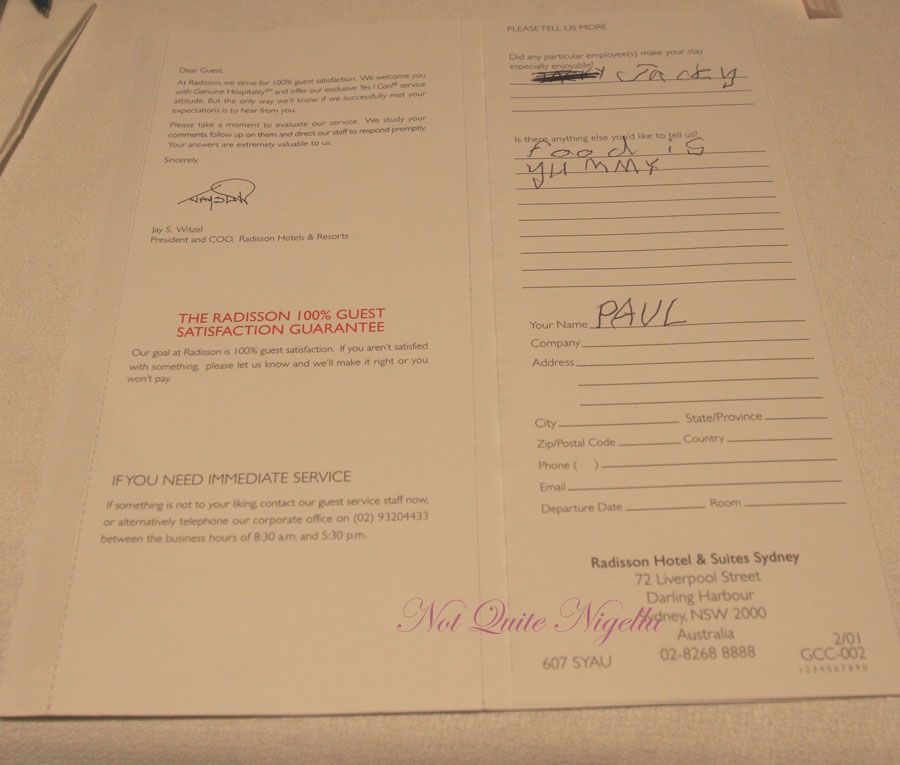