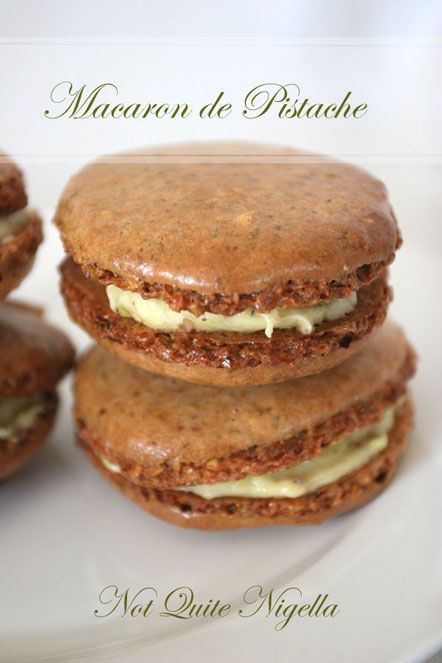 Macaron. A single word to strike fear and lust into the hearts of baking enthusiasts, myself included. These small desirous goodies are temperamental and prone to inducing obsessive like behaviour in otherwise normal people. I've made these a couple of times, based on a Martha Stewart recipe but they were never brilliant and were ridiculously hard to remove from the parchment. So like an abused baking enthusiast, I would curl into a foetal position whenever someone suggested I make them again.

I did find this recipe, one of the many, many post it noted, in How to be a Domestic Goddess and with a bounty of beauteous green and pink hued pistachios set about breaking the curse. I did experience some bad luck while making these. Indeed there was a pistachio shell amongst the shelled pistachios which found its way to the bottom of the piping bag rendering it stuck. And can I tell you something you probably already knew, reaching your hand into the rough, stickily sweet raw macaron mixture is not at all pleasuresome. I think sticking my hand in it ruined the beautiful lightness of the mix too and the best looking ones were the ones that I piped before the shell blocked the pipe. 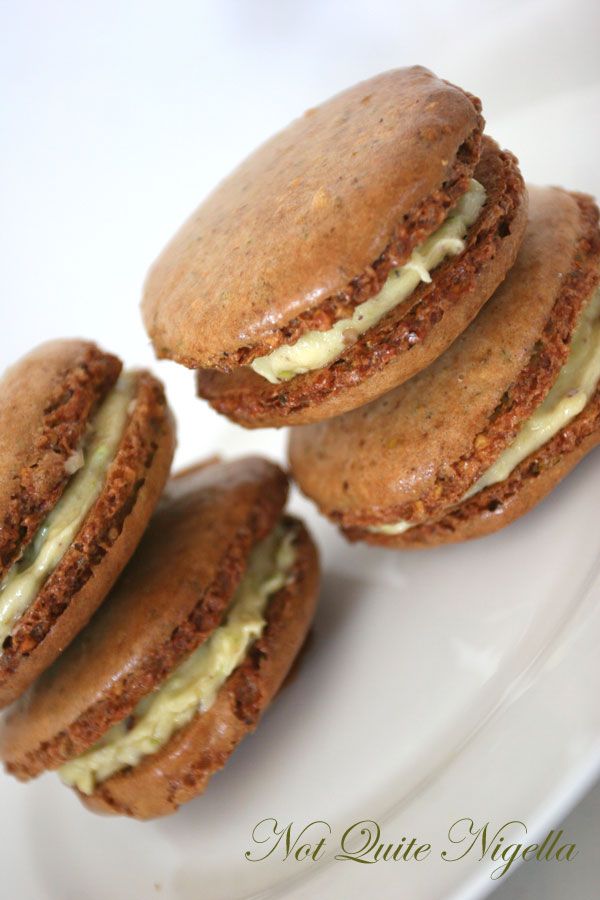 The ones that I placed on the top tray of the oven were beautiful-and joy to behold, with the frilly foot! But they were also more caramel shaded than green. I had turned down my fan forced oven to 160c. The ones in the middle oven tray were a light green but they also cracked in the middle but also with the frilly foot! Sorry to go on about the frilly foot but I was terribly happy to see them, particularly since the ones in Domestic Goddess didn't really have any. Also the recipe was supposed to make 40 single macarons (20 welded together) but mine only produced 15 single macarons. Perhaps mine were a lot bigger at 6cms diameter which is not huge by any means but perhaps Nigella means mini macarons. In any case I halved the buttercream quantities and came out with the correct amount of buttercream for my macarons.

I also took the advice of macaron obsessive David Lebovitz who amusingly documents his macaron baking adventures here. He suggests "rapping the baking sheet hard on the countertop to flatten the batter before baking" which I did. I can only presume that it helped with the frilly foot as Nigella didn't suggest this and her pictured ones didn't have them. He found that leaving them to develop a shell didn't help his cause but Nigella's recipe only required waiting for 10 minutes so I figured I may as well do that while preheating the oven. 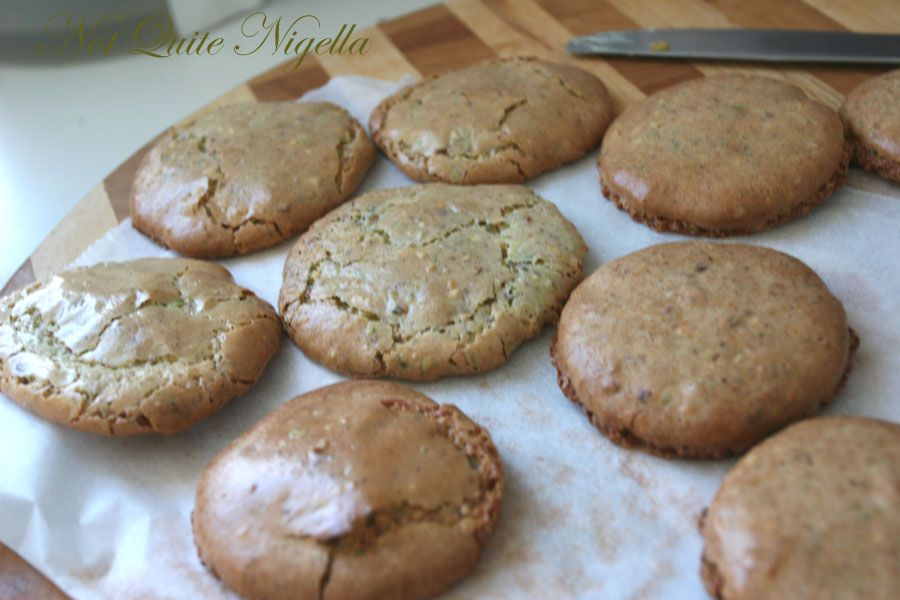 So whilst the colour might be slightly off, I can say that I do consider these a success. They are incredibly sweet so I would toy with the idea of reducing the amount of sugar or changing it to a flavour like lemon for the next batch.

The _next _batch? Did I actually say that? 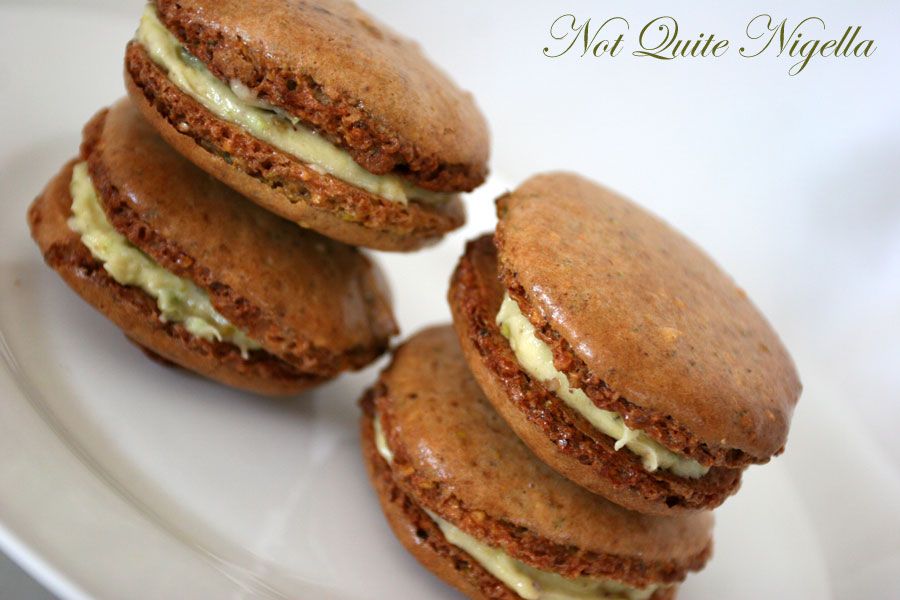 Nigella Lawson - Pistachio Macarons from How to be a Domestic Goddess

These are the worlds most elegant macaroons. The color alone, that waxy pale jade, perfectly matches the aromatic delicacy of their taste; and their nutty chewiness melts into the fragrant, soft paste with which theyre paired. Of all the recipes in this book, this is the one of which I think Im most proud: biscuit bliss.

These are perfect at the end of dinner alongside some confectioners-sugar-dusted raspberries; or alone with coffee, gracefully piled on a plate or cake stand. 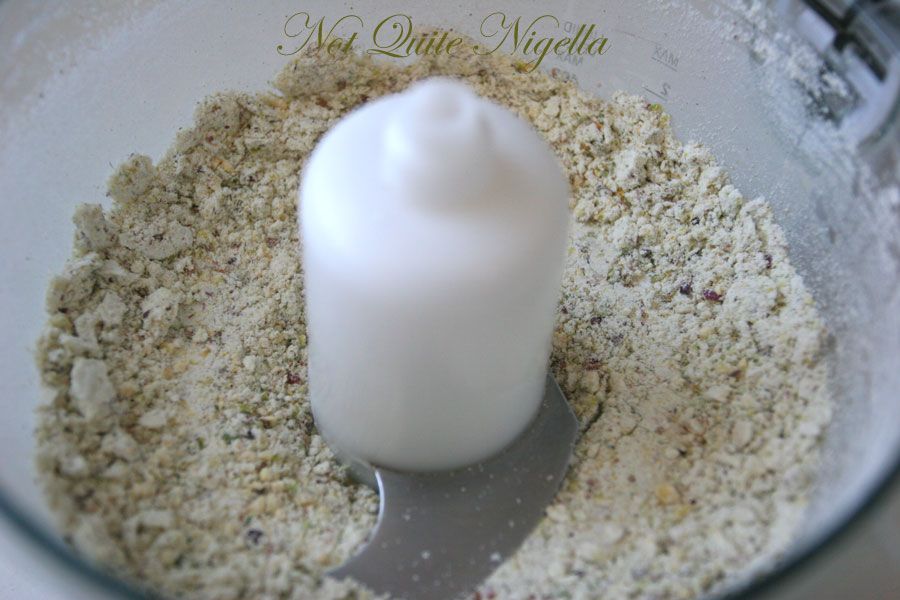 Step 1 - Grind the pistachios in a food processor along with the icing sugar (this stops them turning into an oily mess), until as fine as dust (I didn't grind them that finely as you can see). Whisk the egg whites until fairly stiff, but not dry, sprinkle the sugar over and whisk until very stiff. Fold the whites into the pistachio-sugar dust, and combine gently. 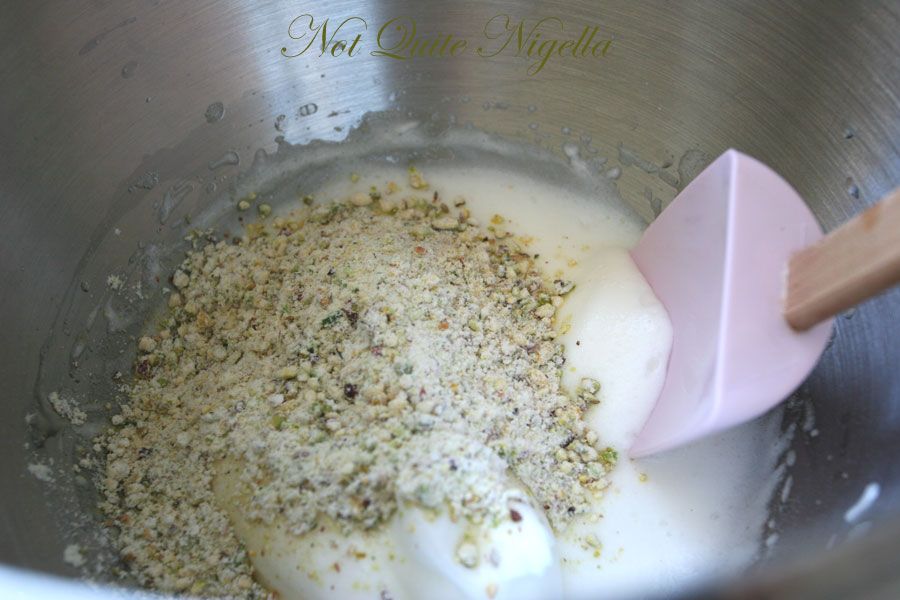 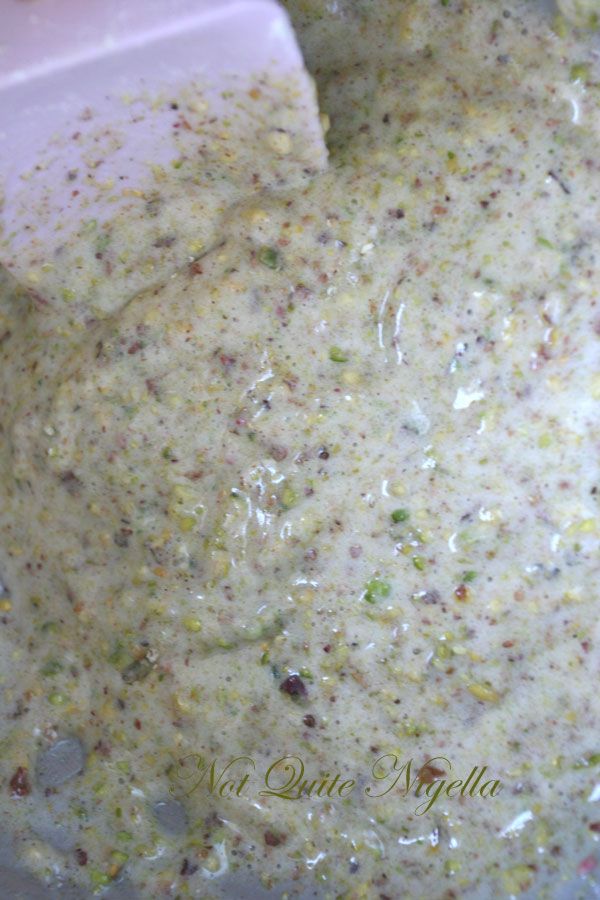 Step 2 - Pipe small rounds onto your lined baking sheet, using a plain 1 cm nozzle. Let them sit for about 10 minutes to form a skin. Preheat the oven to 180°C/Gas mark 4

Step 3 - Rap the baking sheet hard on the countertop to flatten the batter before baking, then put in the oven and cook for 10-12 minutes: they should be set, but not dried out.

Step 4 - Remove from the oven and let cool, still on their sheets, while you get on with the filling. This is simple work: grind the nuts and confectioners sugar in the processor as before; then cream the butter and continue creaming as you add the nut dust. Make sure you have a well-combined soft buttercream. Then simply sandwich the macaroons together.