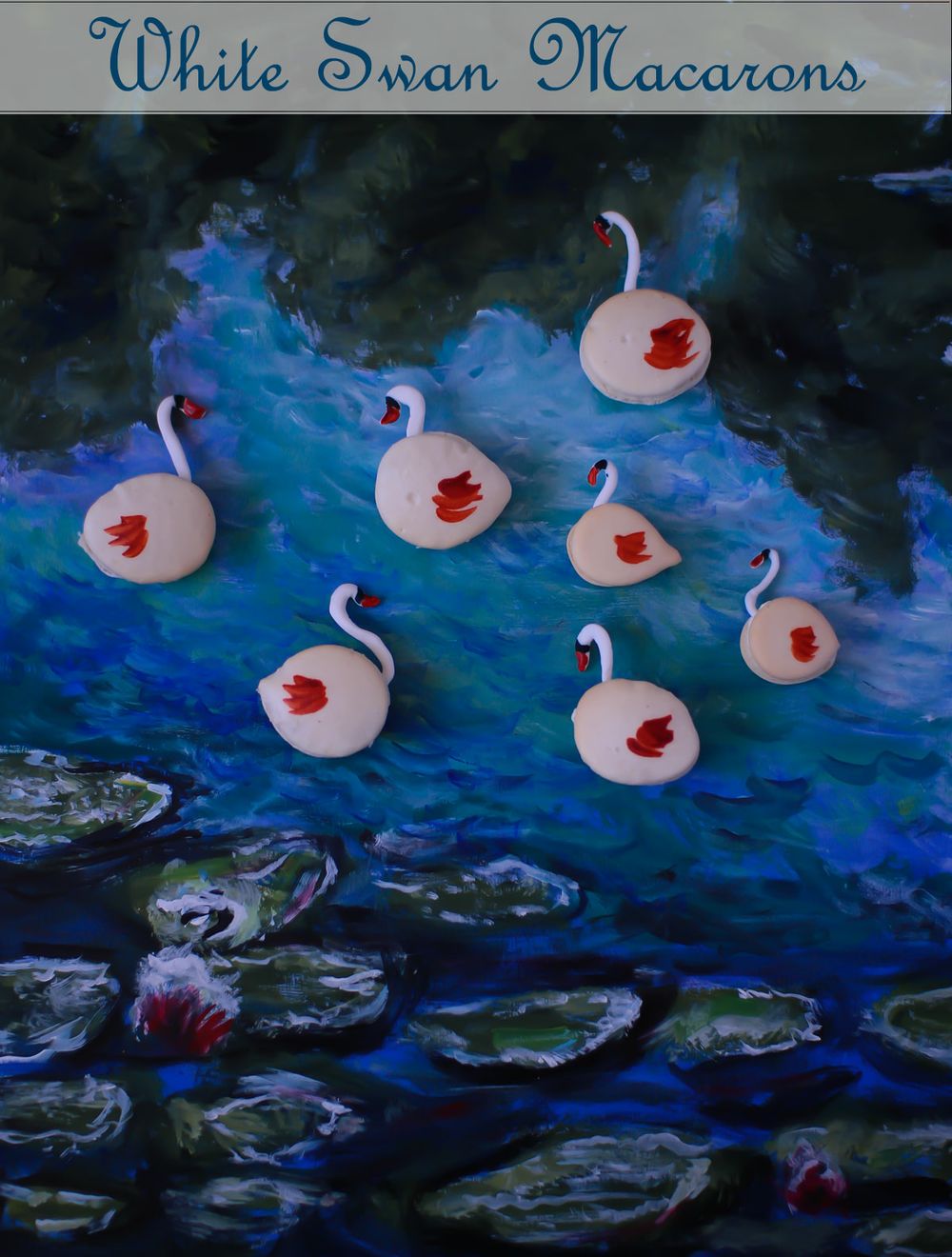 I was clearly not in my right mind. I awoke from my sleep one morning after having dreamed of white swan shaped macarons. I remember reading Stephenie Meyer's blog where she explained where she had gotten the idea for Twilight and it had come to her in a dream (meanwhile I spent the next year hoping that an idea for a successful book would come to me in a dream).

That morning, I should have just woken up and forgotten about swan shaped macarons or just taken the white swan as a sign and analysed it. But I didn't. And that's when the progression from Quirky ===>Eccentric ===>Bats**t crazy goes.

"I think I'll try the swan macarons today" I said talking to myself. I turned on the computer and checked the weather-it didn't look good. It was an uncharacteristically humid day in the middle of winter and of course that's the last time you want to make macarons-humidity is the enemy of macarons. But I was not deterred. After all it had come to me in a dream and well...it was meant to be? 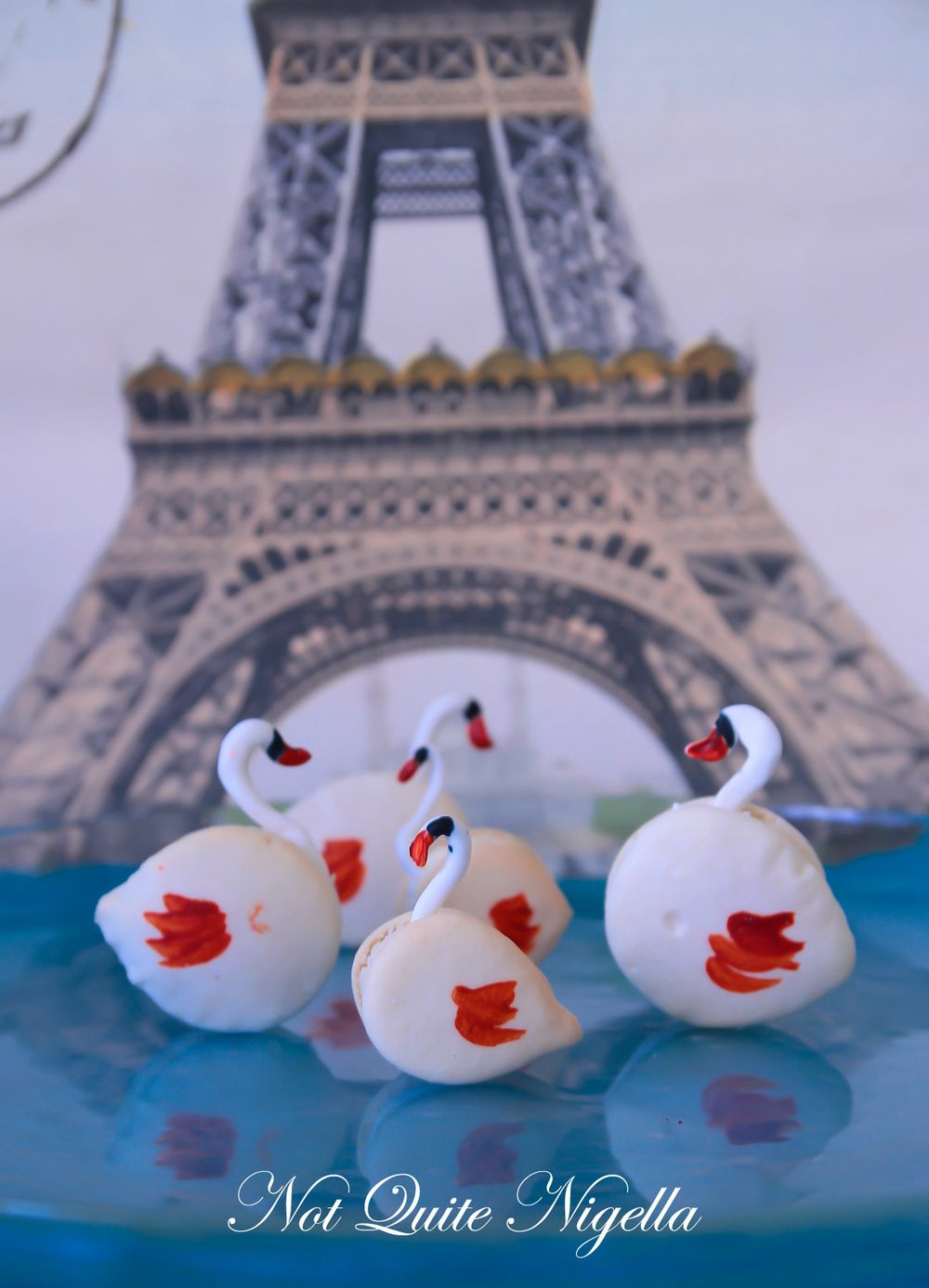 I used the oldest egg whites I had and had aged them as well as dried out the almond meal to offset the humidity. They took a while to get the skin on them but after a couple of hours we finally got there and then I piped them, forgetting that each macaron side has to have an opposite side and then baked them. They had feet, no air pockets and generally turned out quite nicely except that some were cracked. I decided to make swan necks out of white chocolate. What's that alarm that you're sounding? Yes the one where chocolate melts in the humid heat?  Ooh look swans! Yes I chose to ignore that.

I filled the swan shells with buttercream-and breathed a sigh of relief as they actually stood straight up. Trying to simulate water, I slid one of my favourite teal silk dresses under a glass plate I then took out the chocolate swan necks from the fridge and placed them just so on the swans and then picked up my camera to take some photos. I got two shots in before the neck of one swan started to bend and then another and then another. My swans were collapsing in front of my eyes in the heat. In the words of the Wicked Witch of the West "I'm meeeeelltting!" I quickly stuck them in the fridge to harden up for half an hour. 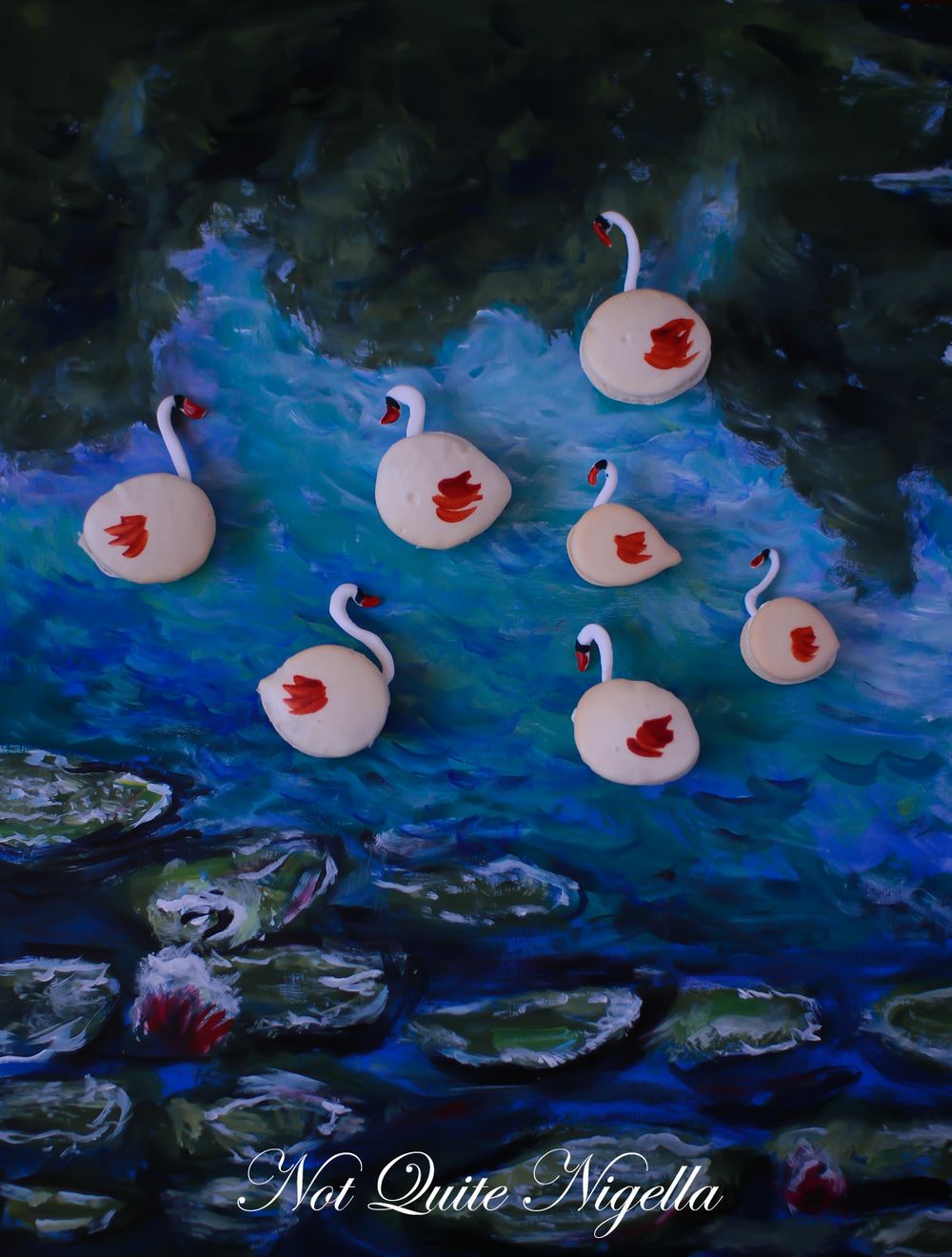 In that 30 minutes I paced back and forth muttering to myself nibbling on a fingernail. Then I realised that the best thing to do, and perhaps you had already come to this conclusion, was not to use chocolate, but to use fondant, set hard as the swan neck. Some fondant shapes were rolled and I left them to harden. A little coat of edible colouring and I finally had swan necks.

As this blog is to catalogue my failures as well as successes so I decided to put this up if only to preserve for posterity, my little dip into madness. They taste lovely although if you want to attempt these please do so with arctic level air conditioning on at full blast and not in the Summer heat and humidity or risk being driven mad by this tiny sweet confection. I realise that the movie Black Swan was all about a descent into madness but perhaps the white swan might get a look in...I think I shall call any meltdowns or madnesses my "white swan moment." ;)

So tell me Dear Reader, do you ever do things that you worry signal madness? And have you ever made macarons and were they a success? What's your favourite macaron flavour-do you like unusual flavours like foie gras or classics like vanilla or salted caramel? 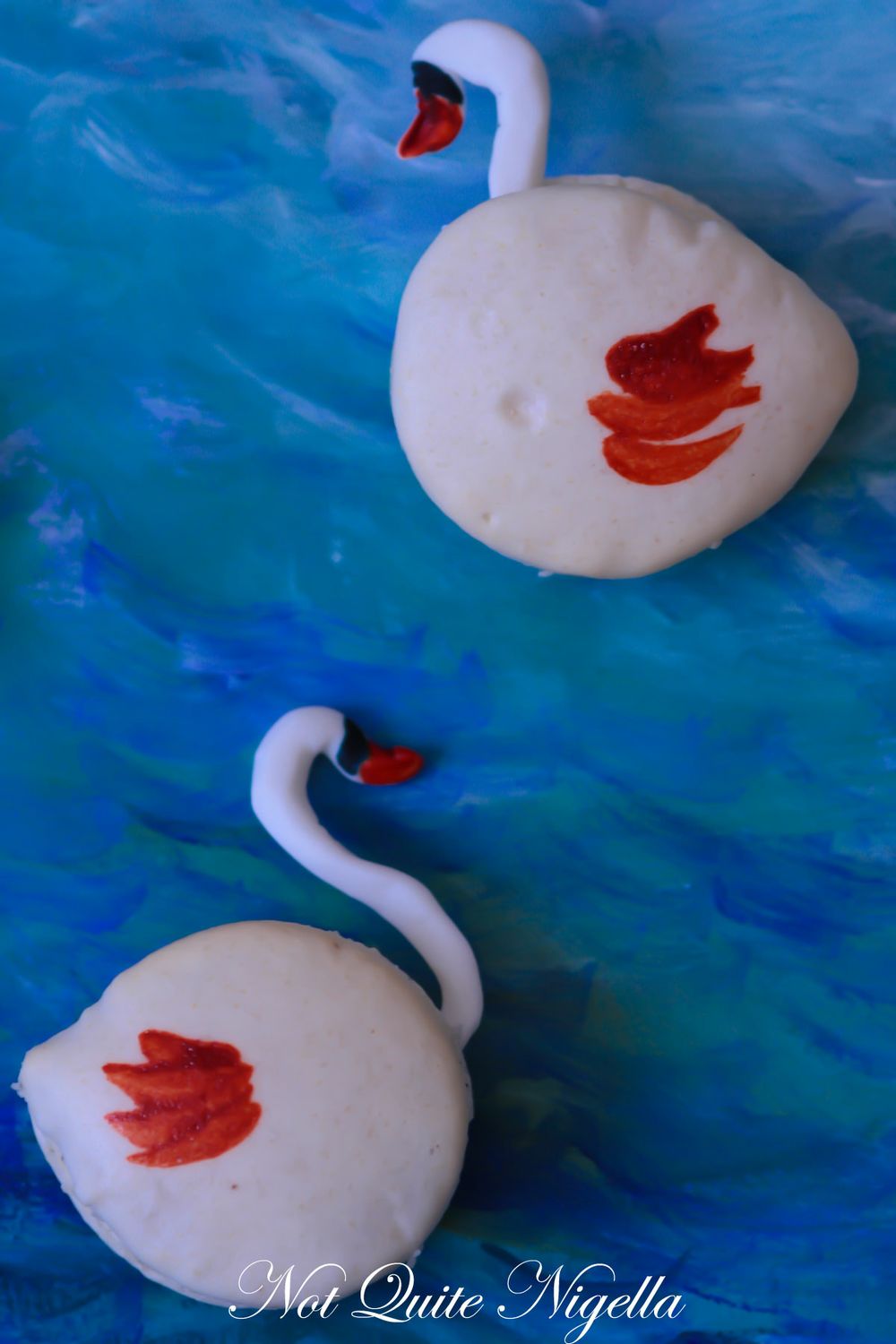 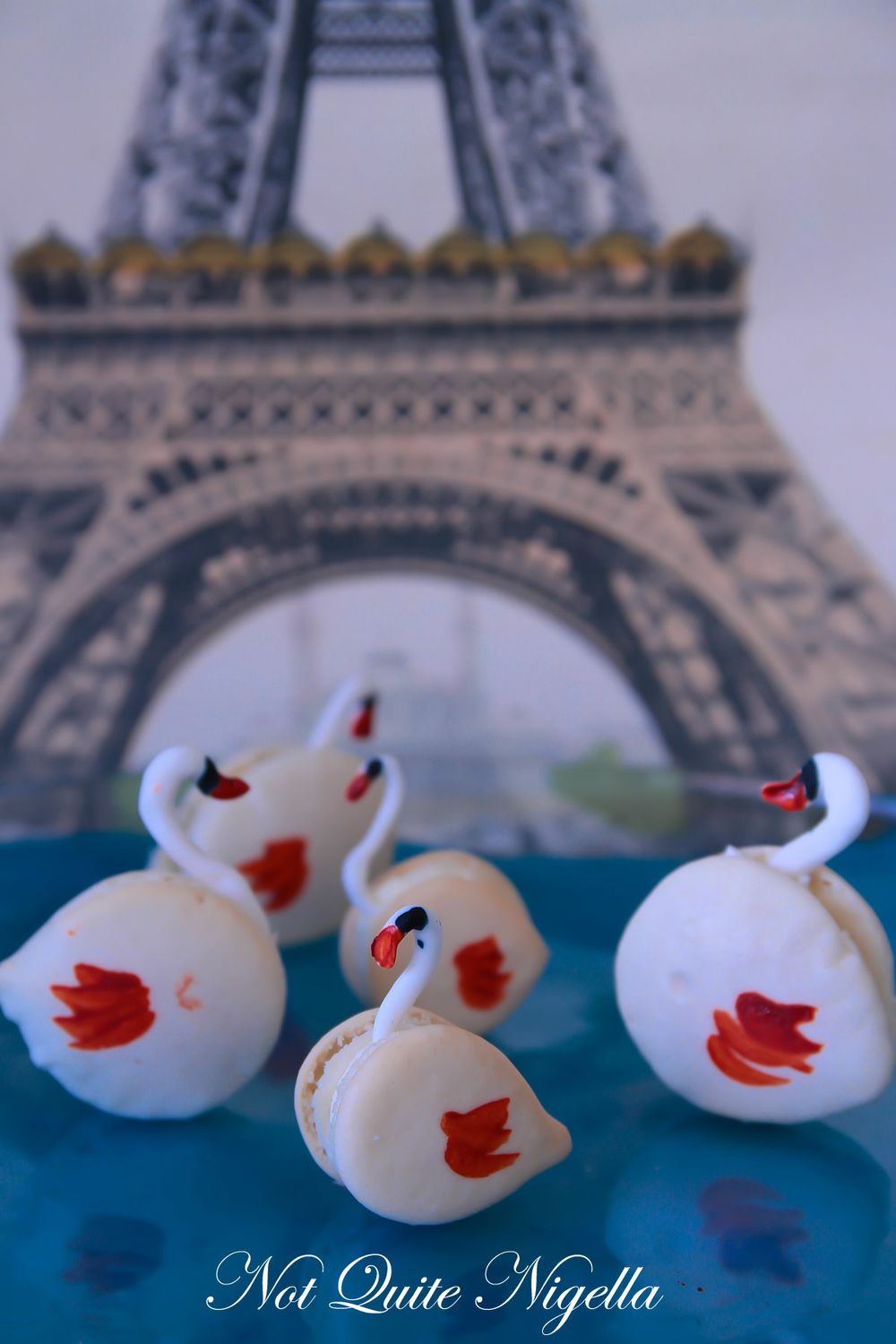 Based on the Baroque Bistro macaron recipe by Jean-Michel Raynaud 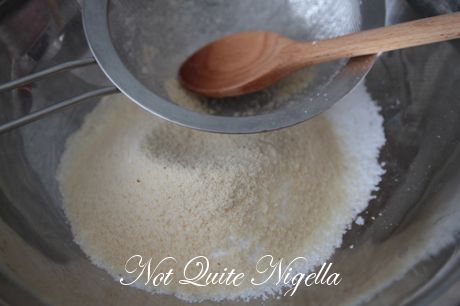 Step 1 - Mix the Tant pour tant with the first lot of egg whites, mixing vigorously until you have a smooth paste. Cover with cling film if is a humid day). 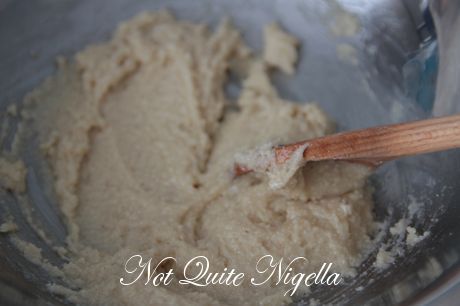 3. Place the old egg whites in the bowl of an electric mixer with the whisk attachment.

Step 4 -  Once the sugar has reached 115°C commence whipping your egg whites until they reach soft peak consistency. When the sugar reaches 118°C remove from the stove and pour slowly on the still mixing egg whites. Turn the speed to maximum for around 1 min and return to medium for another 2 minutes and then let the meringue cool to around 50°C whilst mixing slowly. 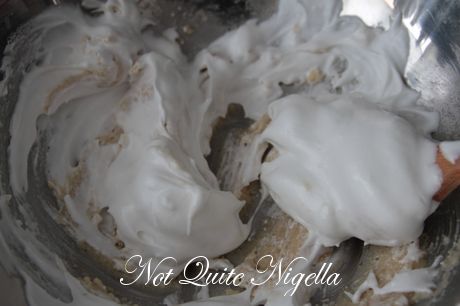 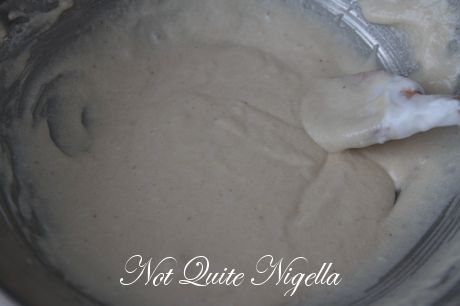 Step 5 - Using a spatula commence incorporating the meringue into the TPT and egg white batter. Work the mix gently from the sides to the middle until you reach a homogeneous, shiny texture. Now deflate the batter by picking it up with a spatula and hitting it against the side of the bowl. Take a little batter and see if the trail remains, if it does, then keep deflating it. I know, this is totally against instincts! 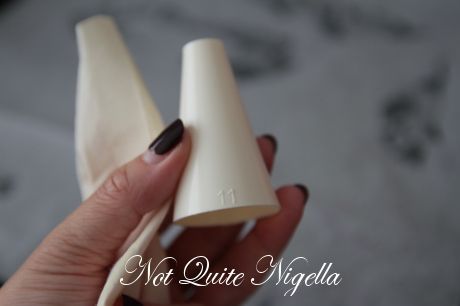 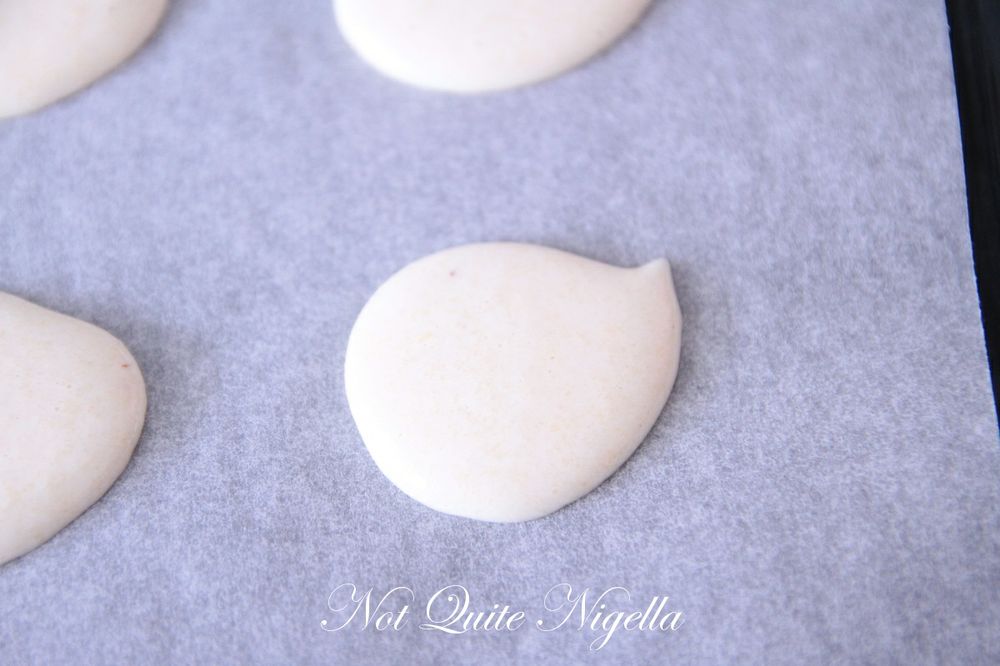 The swan shape you want to aim for

6. Using a plastic piping bag with no. 11 tip, pipe the shells onto a baking sheet-do a round and then stop squeezing on the bag and then flick it up at the end. it does take practice. Also remember, unlike me, that there should be a mirror reverse image of the swan body to have both sides. Tap the tray gently on the side of the bench. 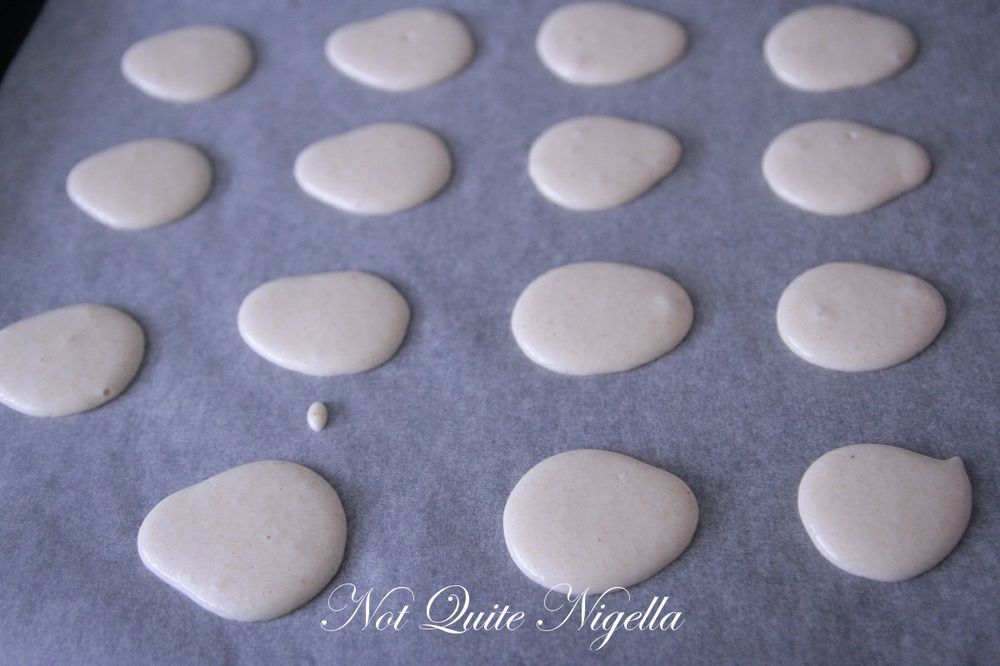 Although I have to show you the rest of the sheet of macarons! It's not easy and takes a lot of practice! ;)

Step 7 - Leave the macarons outside at room temperature for 15 minutes-2 hours or until they have formed a skin and are dry to touch and they don't leave anything sticky on your fingers if you gently touch it.

Step 9 - Make buttercream by placing the butter in the bowl of an electric mixer. Using a beater attachment, beat the butter until smooth. Add icing or superfine sugar 1 cup at a time making sure to beat it on low speed so that the icing sugar doesn't go everywhere. Add milk if it is getting a bit too stiff. Finally, add the vanilla extract and beat until you get a smooth texture. Match the swan halves and with a paintbrush, paint some feathers on each half. Fill one half with the buttercream filling and gently press against the other. Allow to rest for 24-48 hours (so that the shell softens and absorbs the flavours of the buttercream). 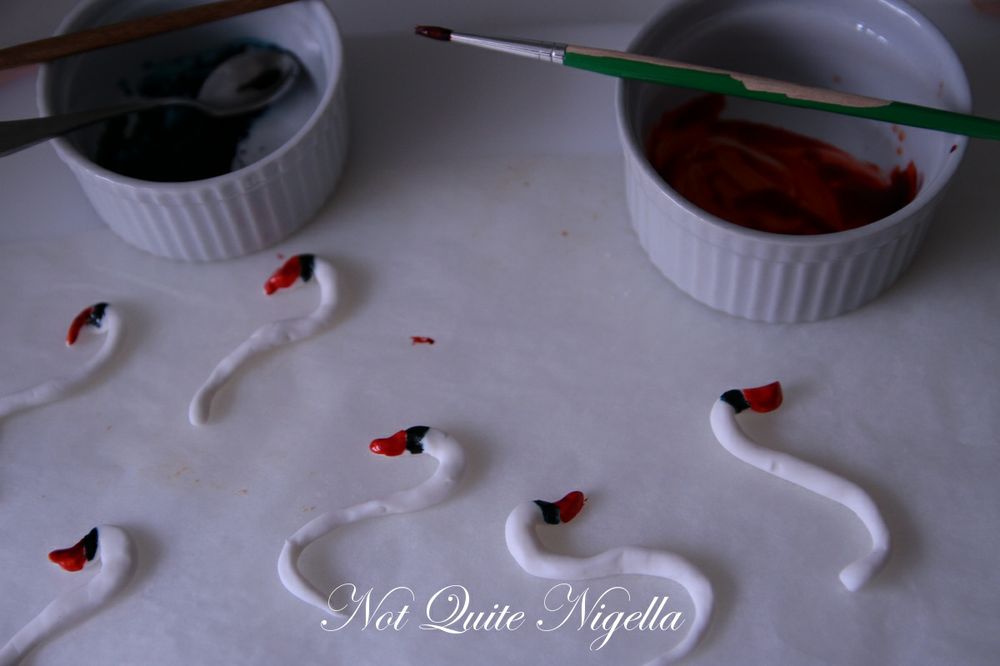 Step 10 - Allowing the macarons to rest also gives your swan necks time to set. Roll small sausages of white fondant and then shape into an S shape. Pinch a small beak into the end of one. Allow to harden overnight or for a few hours. Then paint with black and orange food colouring gel as shown above. Gently push the necks into the buttercream and then sit the swans upright. 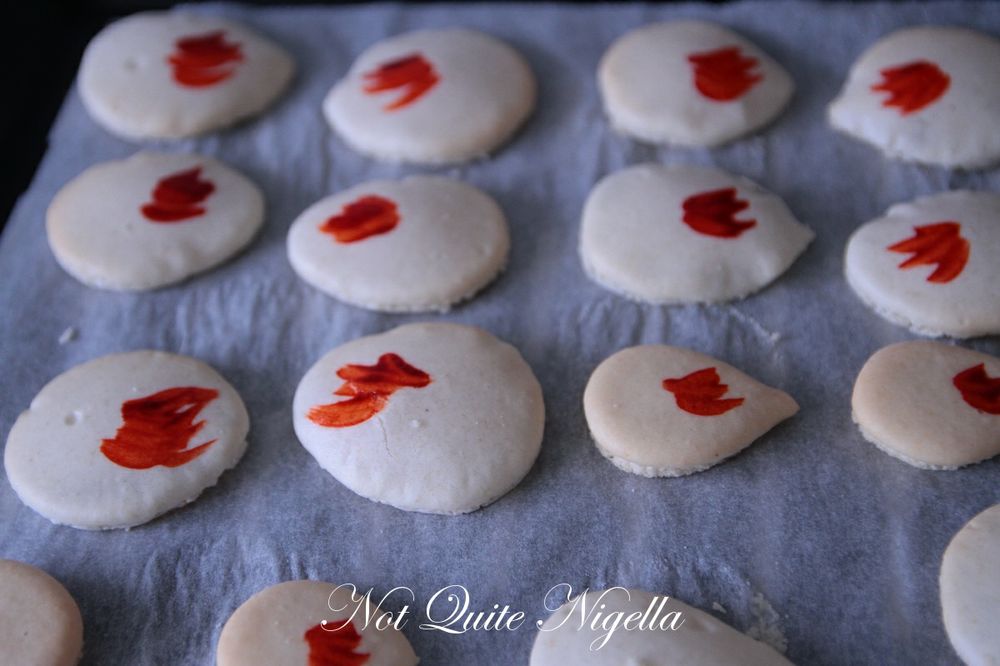