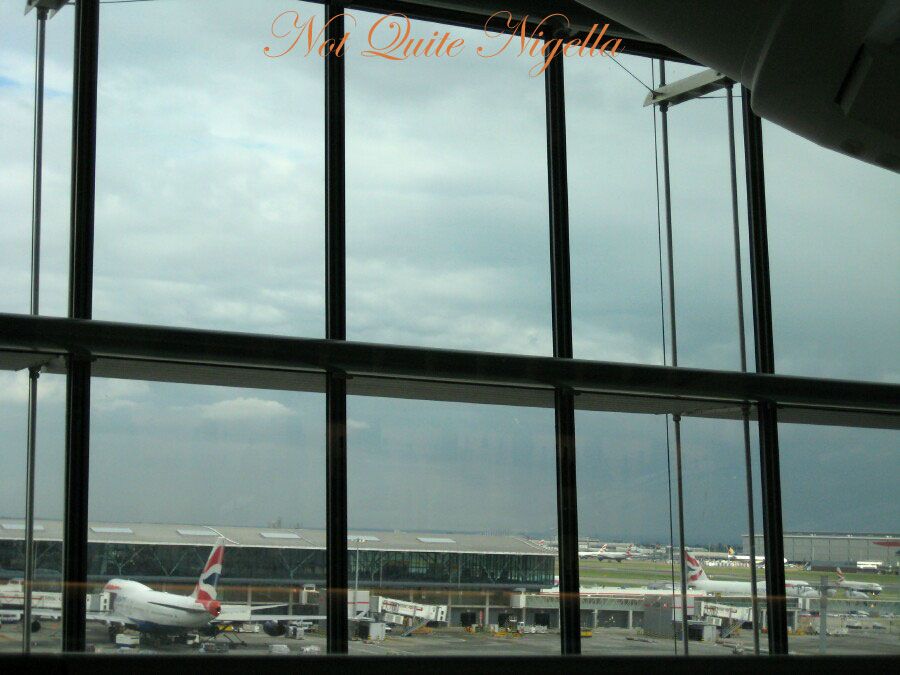 I have some rather awesome friends I must say. Ones that share in my love of food and understand when I whip out a camera during a meal without sighing loudly or complaining. One of these friends is the self named "Carbon Debit", owing the amount of time she spends in the skies traveling. So when she went to Gordon Ramsay's Plane Food restaurant at London's Heathrow Airport T5 we were all interested to see what she had to say. It's no secret that Australia is Gordon Ramsay obsessed, which will only be spurred on by his Sydney appearance at the Good Food and Wine Show (where an ebayer sold two tickets and a copy of his book for $350!).

So without further ado, here is what my friend had to say about Gordon Ramsay's Plane Food.

I wasn't really that hungry because I had a rather large plate of salad for lunch before I left for Heathrow, at around 1pm. I got to Plane Food at around 4:15pm. But I had to have something there, or it would have defeated the object of going to Plane Food.

Their menu was displayed well before the entrance (which is down a corridor) so it was easy to decide whether I could find something I wanted to try despite not being hungry, or not, without feeling bad about looking and walking off.

I spotted a crab and miso salad with purple shiso which sounded rather light and lovely. They also offered a starter size and a main size. Ideal to have a starter sized one under the circumstance. The area is quite spacious and airy, and it is sort of on a 'balcony'. It's hard to describe exactly what it's like, but you can see the floor below you, if you sit nearest to the window, as well as the tarmac area and BA hangars. Tables are not too crammed in, although not so sparse either. The lines are 'clean' and there is no chintz in sight. It's a very pleasant andrelaxing but at the same time not excessively casual atmosphere.

So I walked up to the entrance and was greeted by a bright, friendly but not overpowering girl who showed me to the table. She asked me if I wanted to sit near the window, which I said yes. She helped me put my carry on out of the way as well. She told me that the special was duck in orange sauce. Under a normal circumstance I would definitely have that (perhaps as well as the crab miso salad!), but I was just not hungry enough. Dammit. I shouldn't have had the salad for lunch.

Although I already had a look at the menu, I did have a bit more look out ofcuriosity. It all looked pretty good. A waiter promptly came up to ask me what I wanted to drink, and I asked about juices. He knew what they had (often not the case in restaurants!), and I ordered a glass of cranberry juice which arrived very promptly.

Crab miso salad with soya beans, cucumber and purple shiso was duly ordered (everything was very efficient there) and I only needed to look out of the window onto the passing BA aeroplanes for a very short time before it arrived. 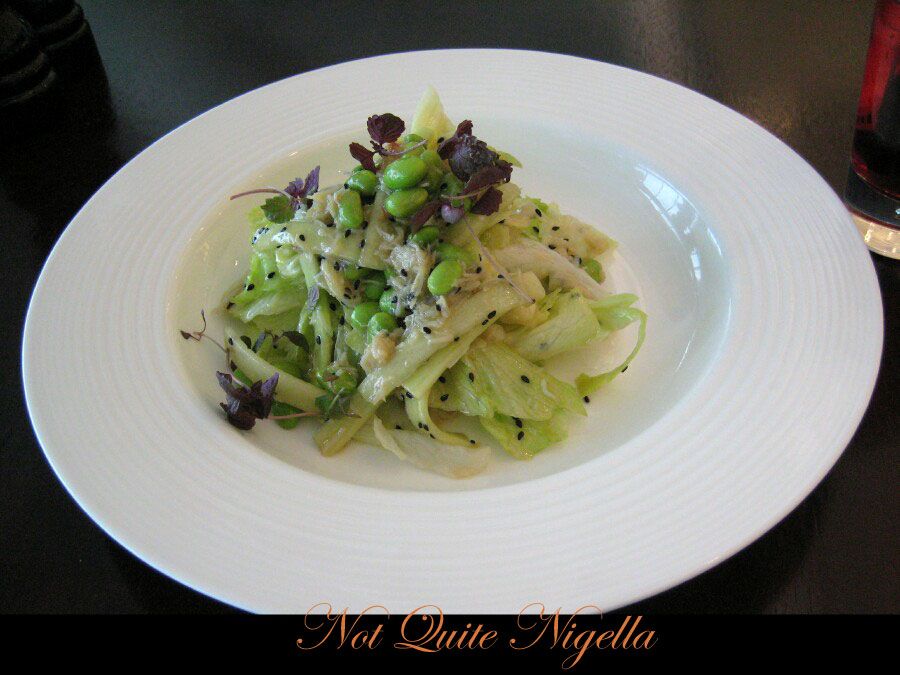 The flavour was very subtle (I think they used white miso) but without being too faint. I think it was just about right with crab - you don't want anything too strong or you wouldn't taste the crab. To state the obvious it was proper crab, not crab sticks! All of it looked and tasted fresh. Delicious, really. Lettuce was really fresh and crunchy as it should be too, and soy beans not over-boiled (easily done) and just right too.

Just a comment on the cutlery. The small bladed knife could seem a bit odd, but that is the only way you can eat with a metal knife on the 'secure' side of the airport there, because there is a legal limit on the length of the blade. Just be thankful that they are permitted to use metal cutlery at UK airports, because eating the lovely food with plastic knife and fork would simply not feel right. 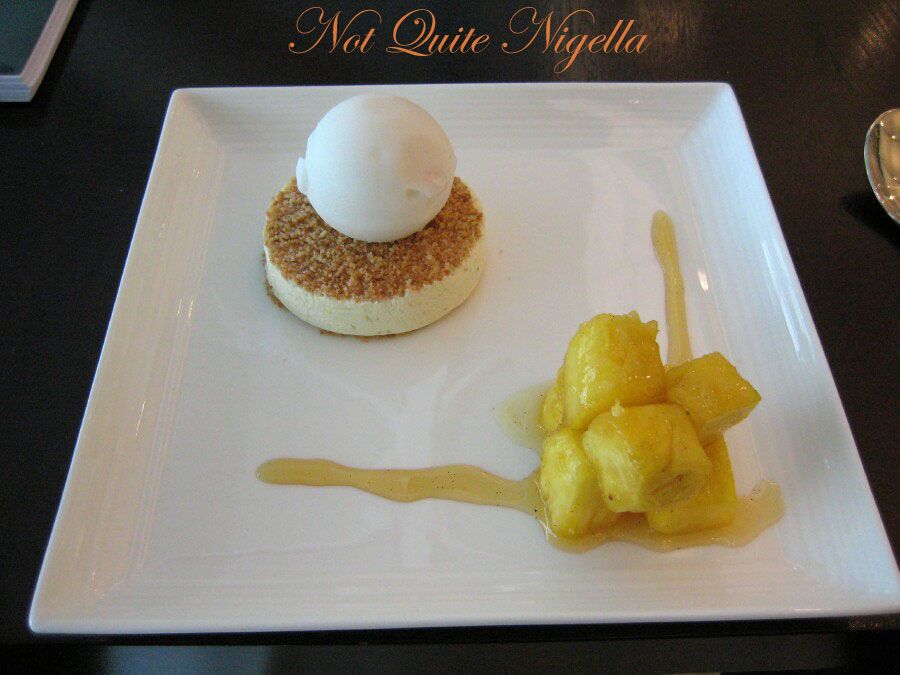 The waiter came up and asked how it was, so I told him it was excellent, and it was my honest opinion. Shortly after I finished, the waiter came up to see if I wanted anything else. I said I was a bit full and so if I could get the bill. He asked me if I wouldn't like to try lime parfait because it's really light, and if I wasn't impressed, he'd take it back and not charge me for it. So, how could I refuse... I was resisting a temptation to commit too much gluttony and feeling over-full, but if it's really light as he said, why not!

It was lime parfait with sorbet with a hint of coconut and pineapples. I couldn't remember its proper name, so I looked it up on the Plane Food website now...Lime parfait, spiced pineapple and coconut sorbet. Again it was served very promptly (but without being quick enough to make you feel like you're at a fast food place).

I don't normally like too much coconut flavour but this was subtle and lovely. Lime parfait was light but without being like mousse - and even the crumbs tasted delicious. Pineapples had this gorgeous deep yellow colour. I thought the presentation was quite cute. 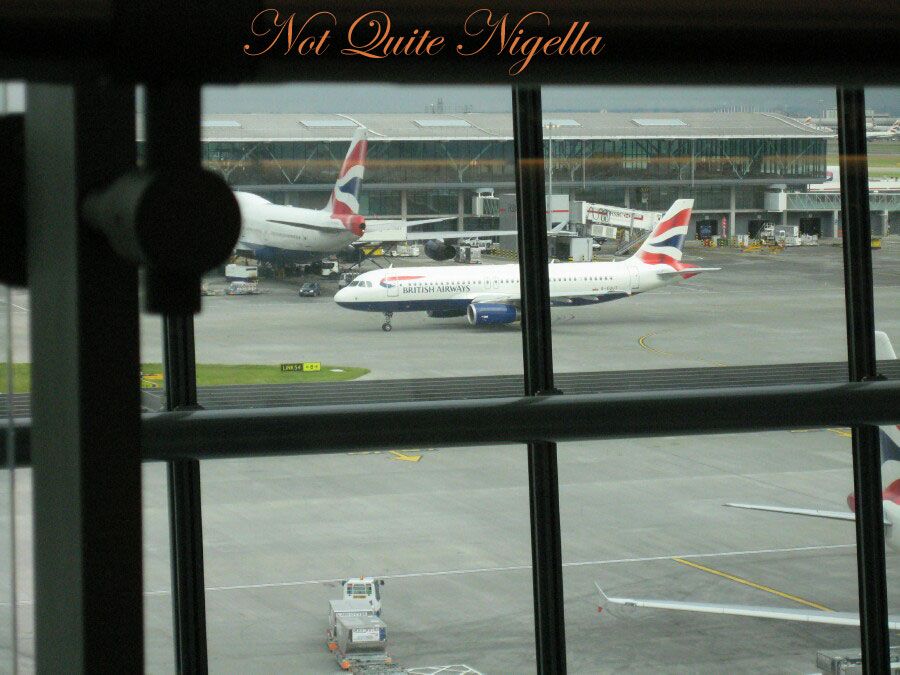 So, overall, I was rather impressed with the food and service, especially considering it's an airport cafe/restaurant. It was also very reasonably priced. The salad was £9.50, and the dessert was £6.00. That's hardly any different from a pub food price (if not cheaper). Juice was only £1.75. There is a discretionary 12.5% service charge on the bill (which is clearly stated on the menu) and I didn't mind that - and I added tip on top because the service was really rather good.

All the staff were very friendly and helpful, totally unpretentious, as well as efficient. I didn't have to worry that my food may not turn up in time for me to catch my flight, even though I did not have a huge amount of time. Combine that with really lovely food, for a damn good price, and you'd have a really great restaurant - and not just any old airport restaurant.

The girl at the door (a different one from the one who showed me to the table) said a friendly goodbye and wished me a nice flight. That added to the pleasant experience at Plane Food.

I think I'd pay more to fly out of Heathrow Terminal 5 next time, just to go to Plane Food.

If anyone is interested in the menu at Plane Food, see this link: