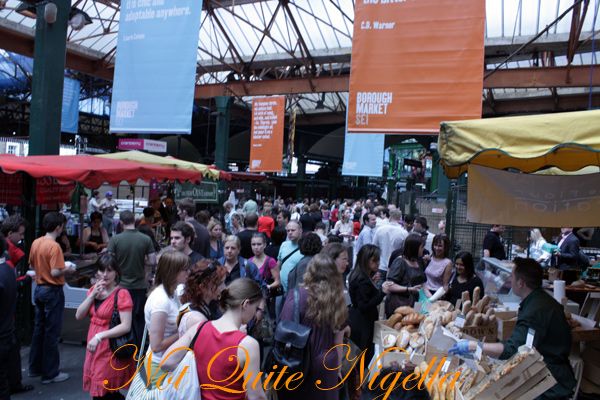 For Christmas this past year, my sister gave me a book on Borough Markets. I flicked through it eagerly going first to the recipes and even made a couple of them. I didn't realise that only a 6 months later I would actually be at Borough Markets sampling some of this very fine produce that I was reading about. Borough Markets are London's oldest markets, incredibly since Roman times when they built the London Bridge, they have been at this location for 250 years and is a market steeped in history and pride of the storekeepers. Artisanal is a term that comes to mind when walking through these stalls (although I hope Artisanal is not a term that become abused as I suspect it might, look out for McDonald's "Artisan burger" ;) ) 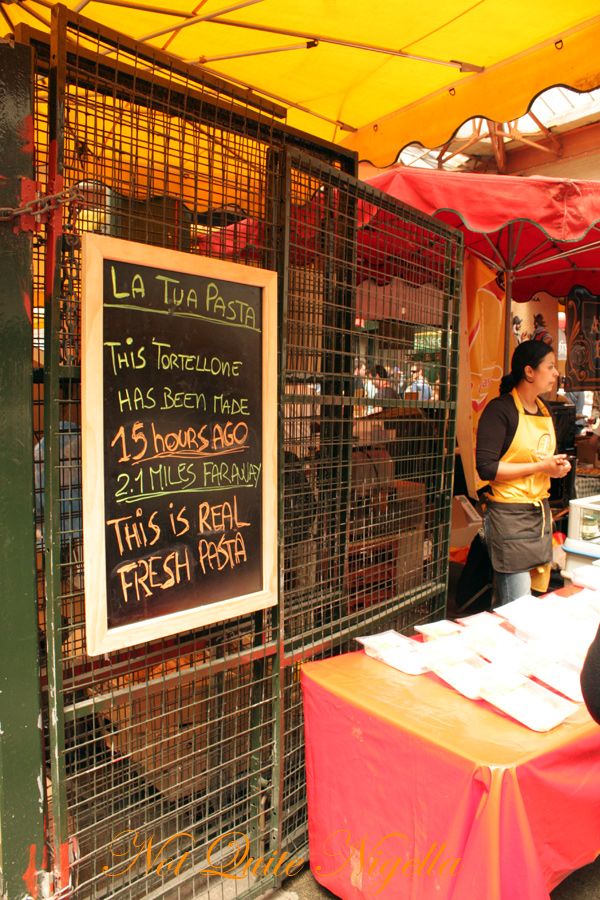 Fresh pasta made 15 hours ago 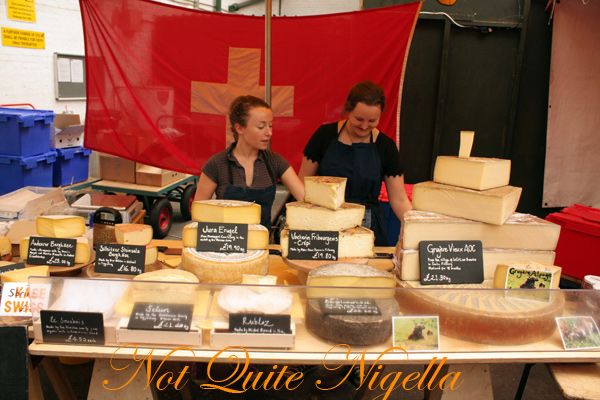 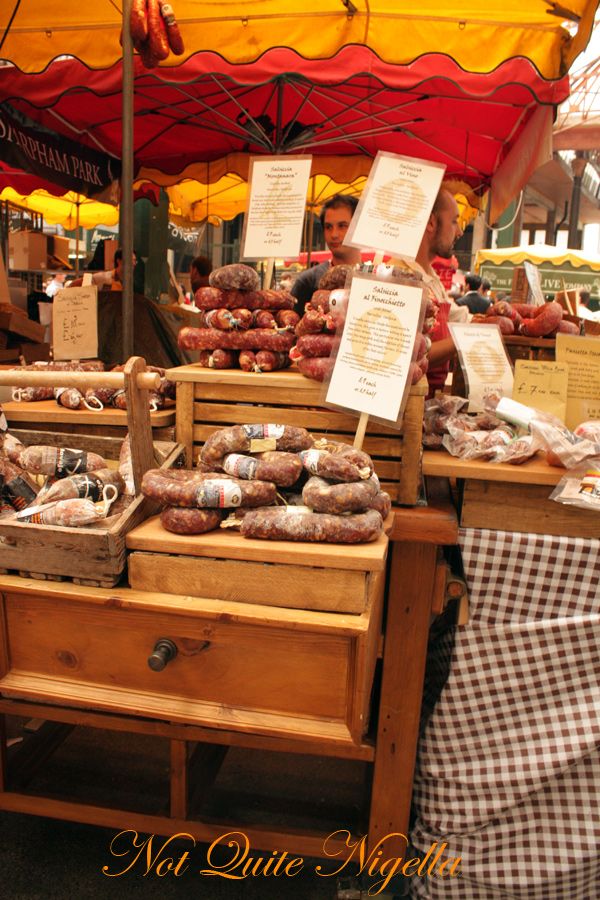 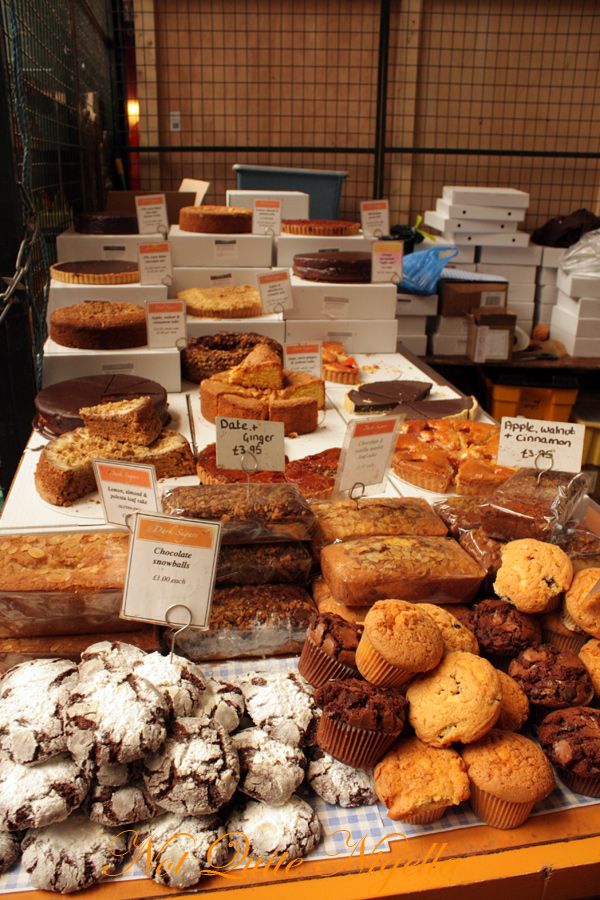 The day after arriving, our first stop is here. We're taken by my sister's friend Candy who is an expat from America who has lived in London for 4 years. She shows us around Borough Markets, which are huge, much bigger than I ever envisaged. There are throngs of people everywhere. It seems that either half of London is on holiday or that the neighbouring offices house a great number of people that pour out into the markets every lunch time to wait in long queues to eat delicious home grown locally made produce. 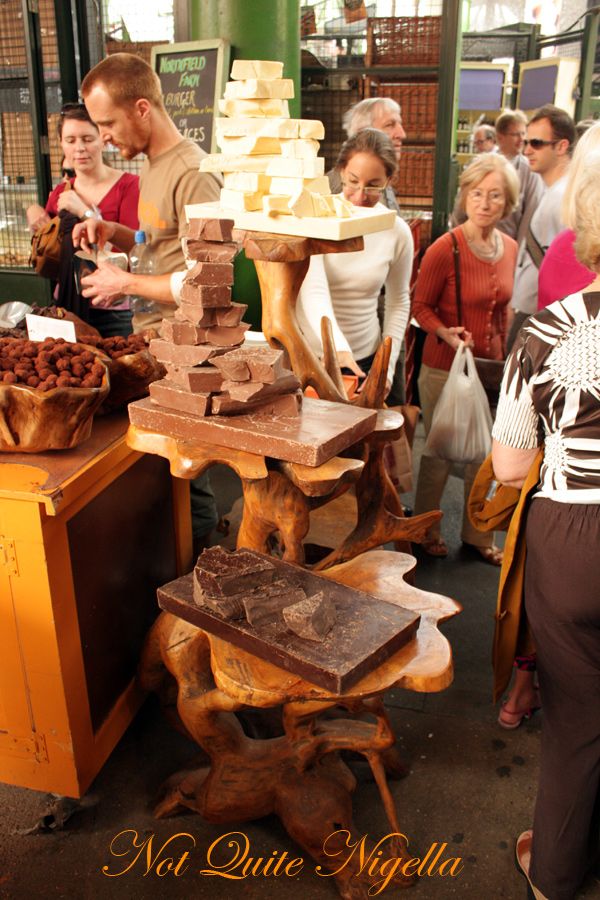 Huge slabs of chocolate and truffles 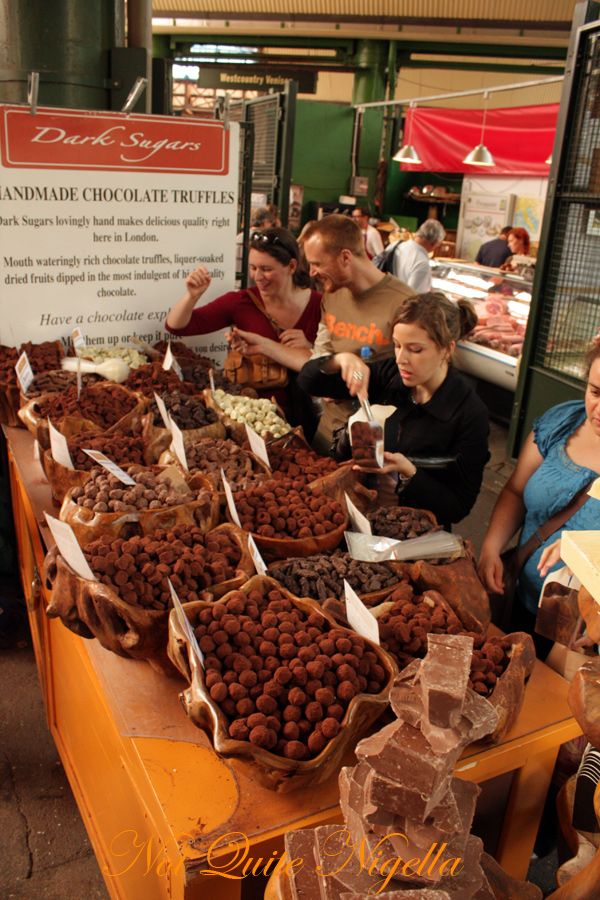 Pick your own truffles 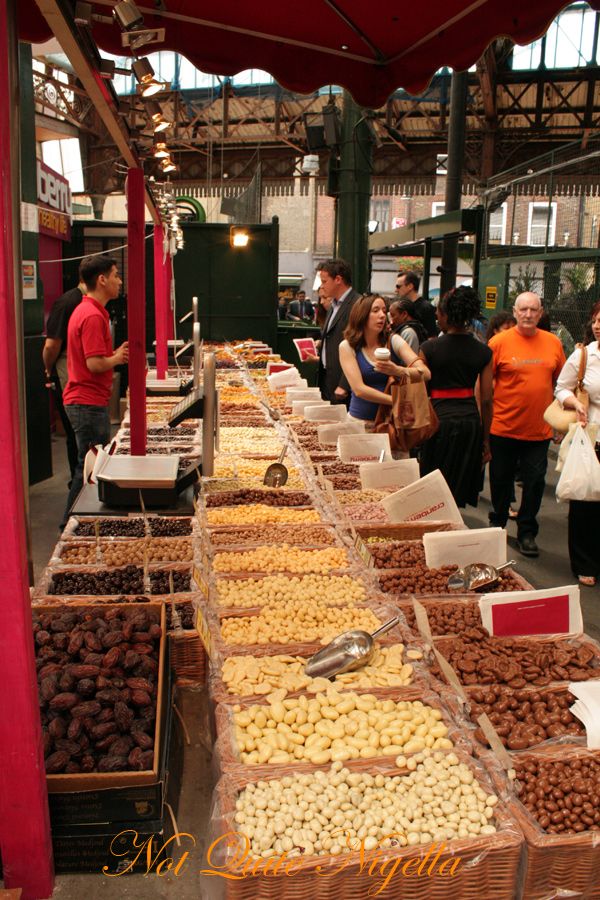 Prices vary but on the whole they're generally at a premium. Most of the providores are artisans proud of their produce and there are many samples proffered to the waiting public in an attempt to seduce. 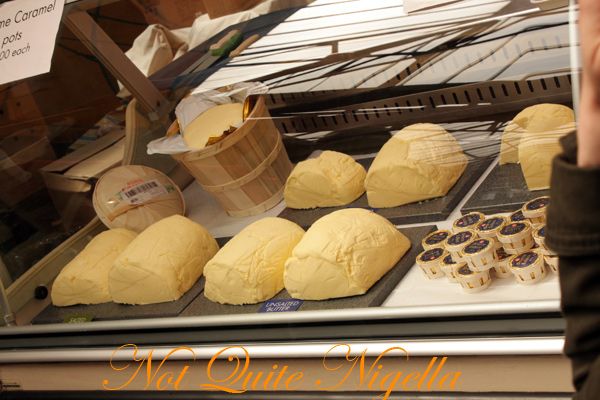 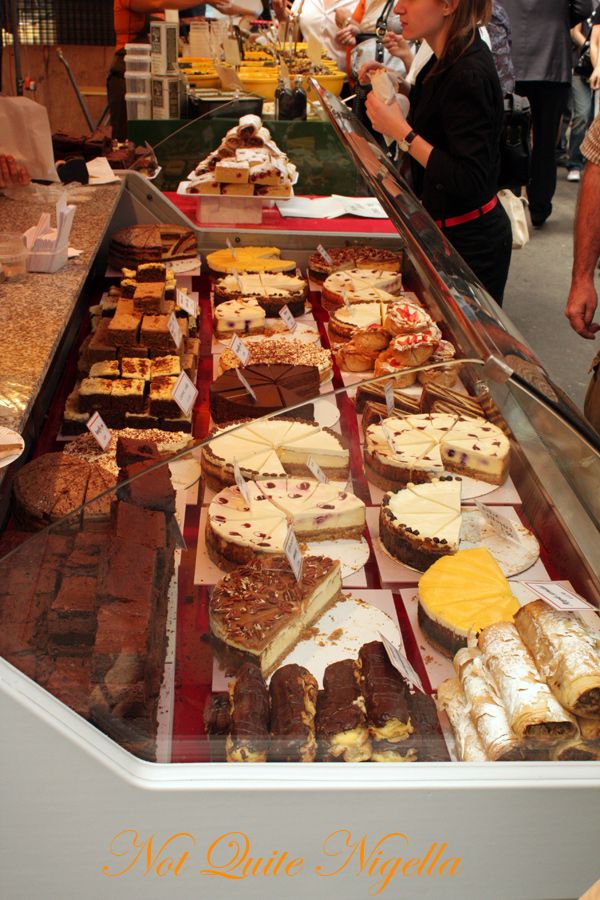 Slices of cakes, eclairs and strudels 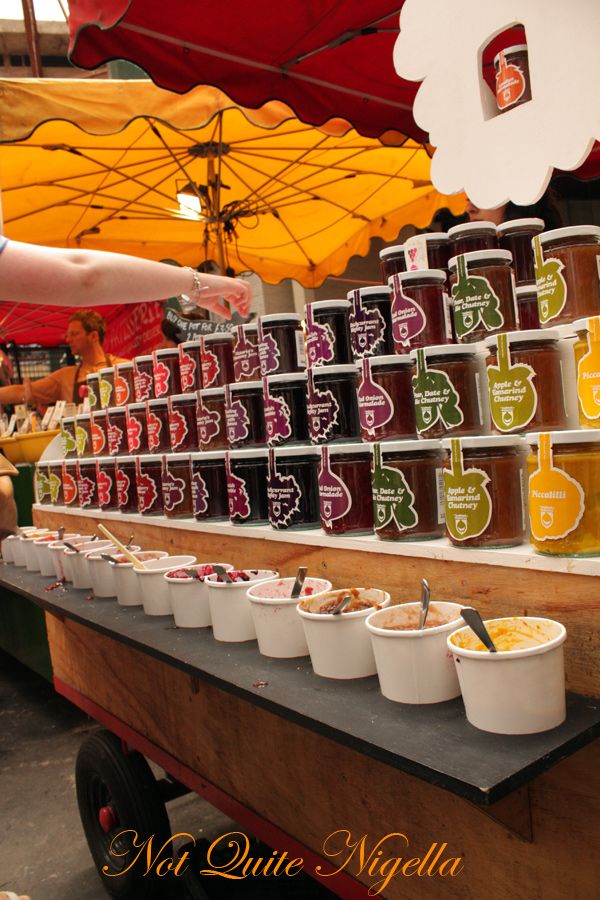 Along with picture perfect fruit and vegetables, there are vividly coloured flowers and a range of seafood, some of which I've never seen before like the long cylindrical clams. 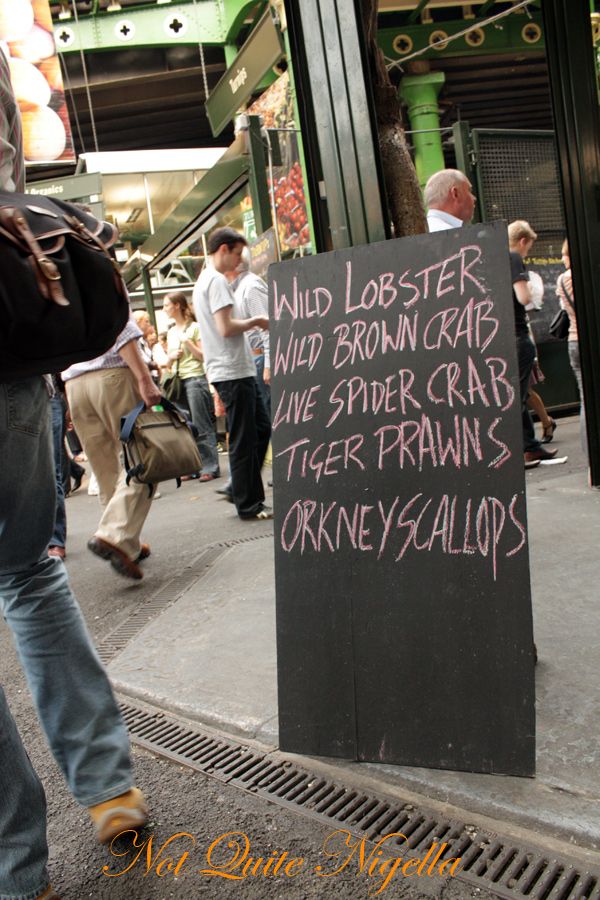 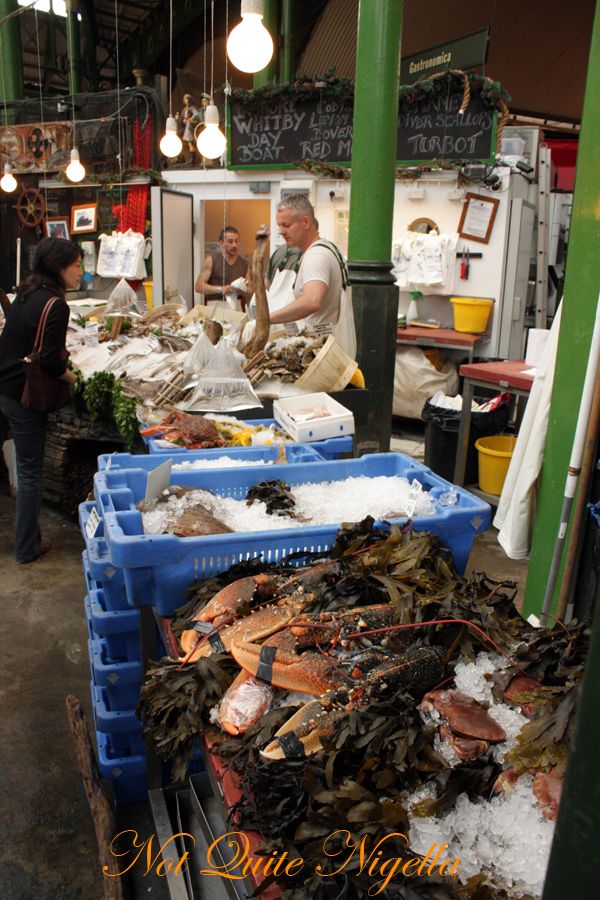 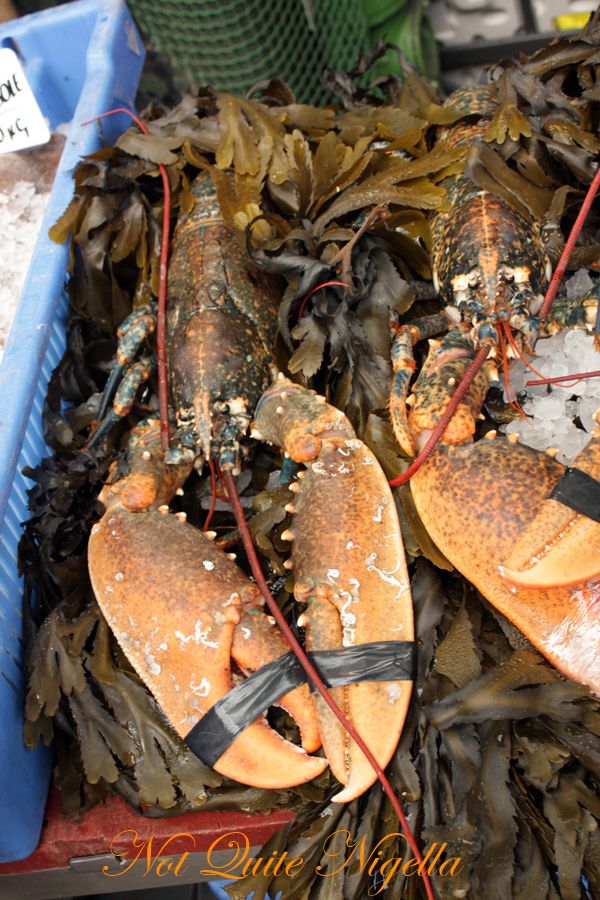 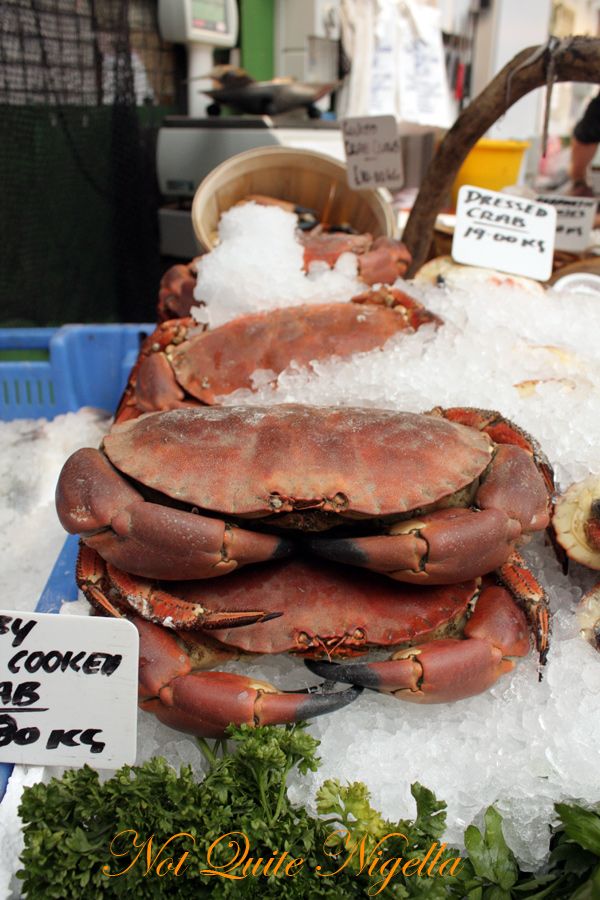 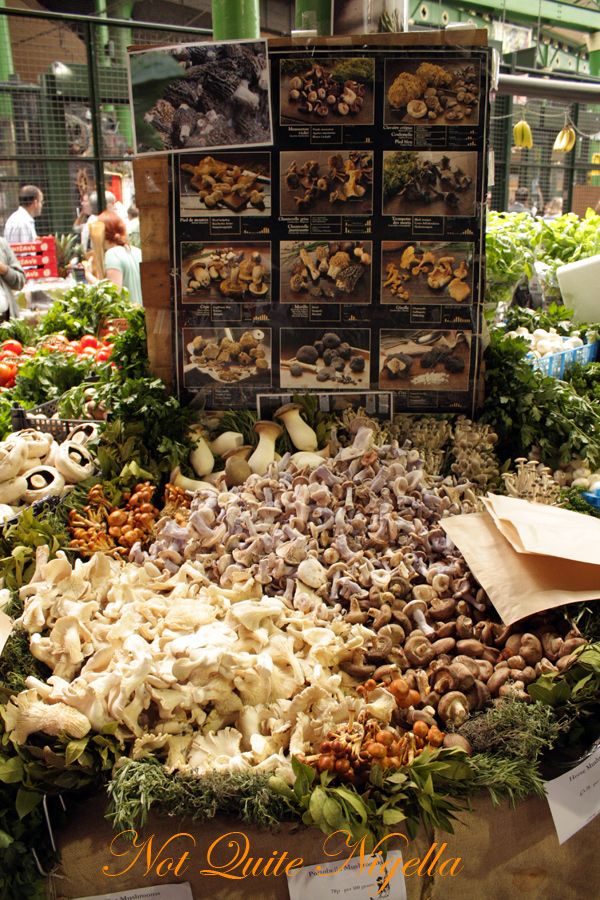 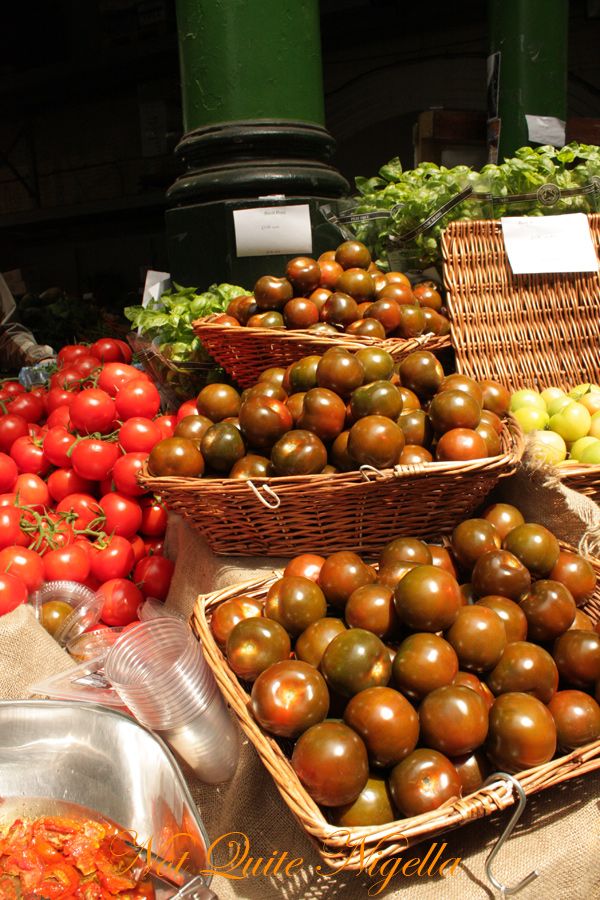 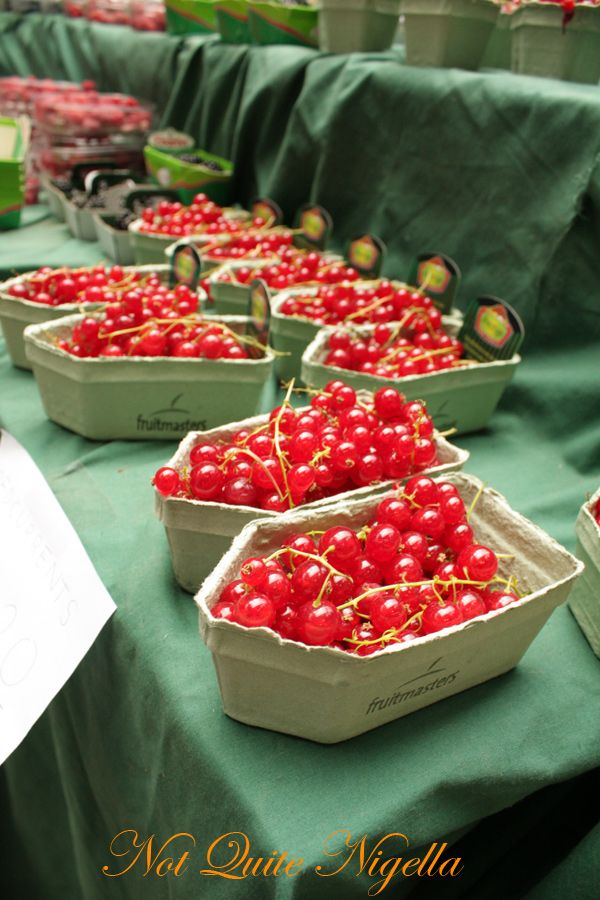 How perfect do these tubs of redcurrants look? 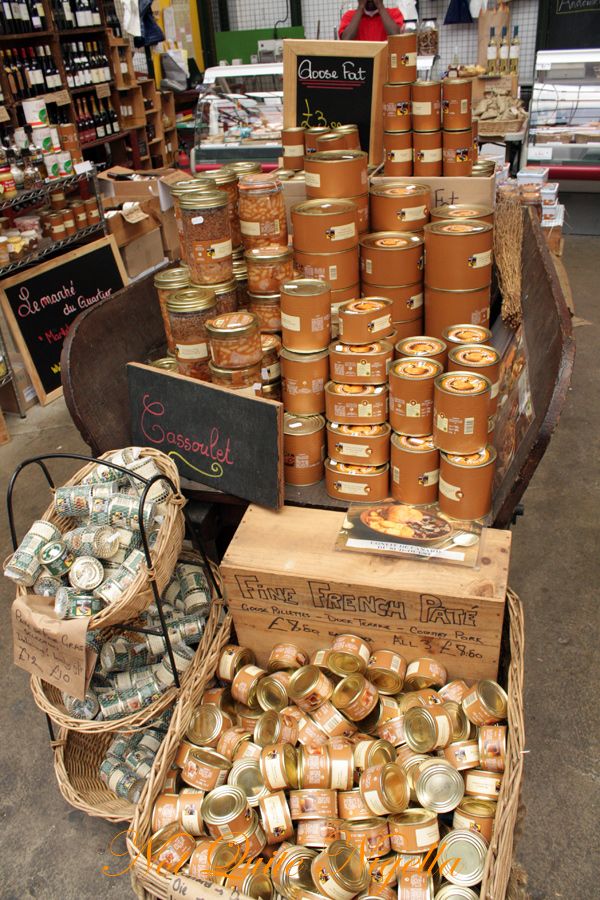 Even French food gets a look in 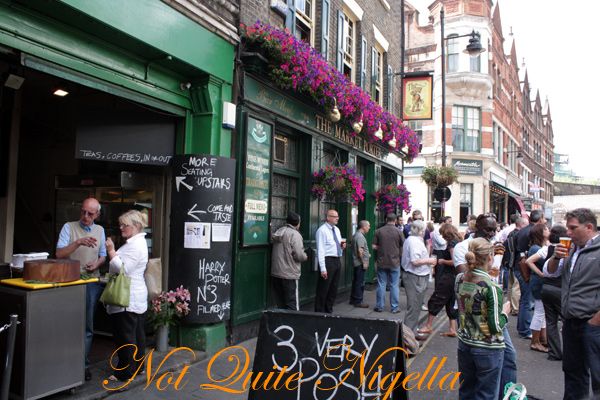 "Harry Potter No. # 3 filmed here" You didn't think I'd miss the chance for a Harry Potter moment?

There's even a sign near the pub saying that a scene from Harry Potter was filmed here-one look at the pub and you can definitely see that it could have been. 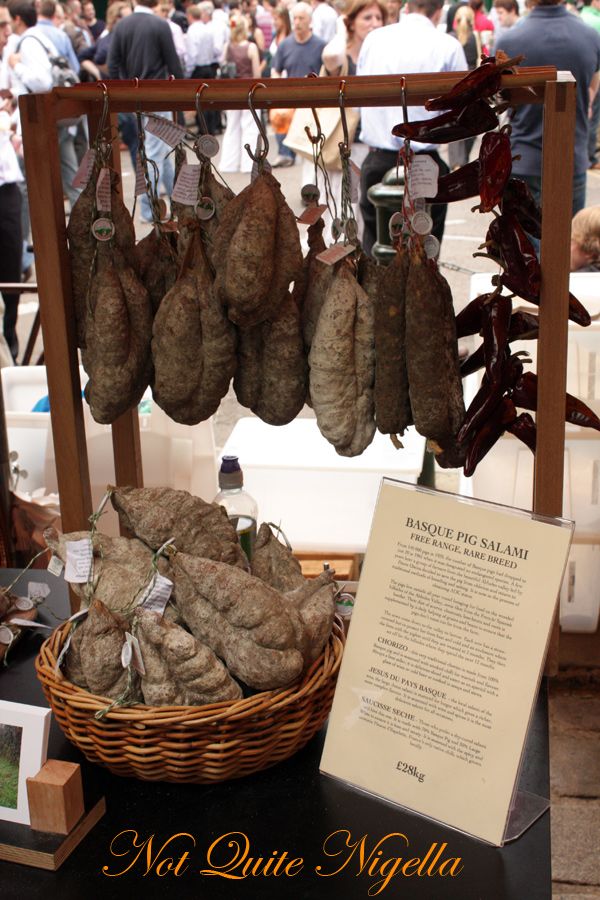 Enough of this browsing, we're ready to eat and it seems so are most of the markets as the queues stretch out long for most of the hot food. We tried to get a table at Tapas Brindisa to no avail so we settle with one of their Chorizo rolls (a double with two sausages £4.75). I line up at another stand whose name escapes me, just look for the queue, and get a roll filled with Wild Boar sausage and a Devils on Horseback roll filled with cumberland sausages wrapped in bacon and prunes (both £4.00 for large £3 for small). The Wild Boar sausage was guaranteed at least 90% meat which is a refreshing change for English sausages from what we've seen on The F Word. 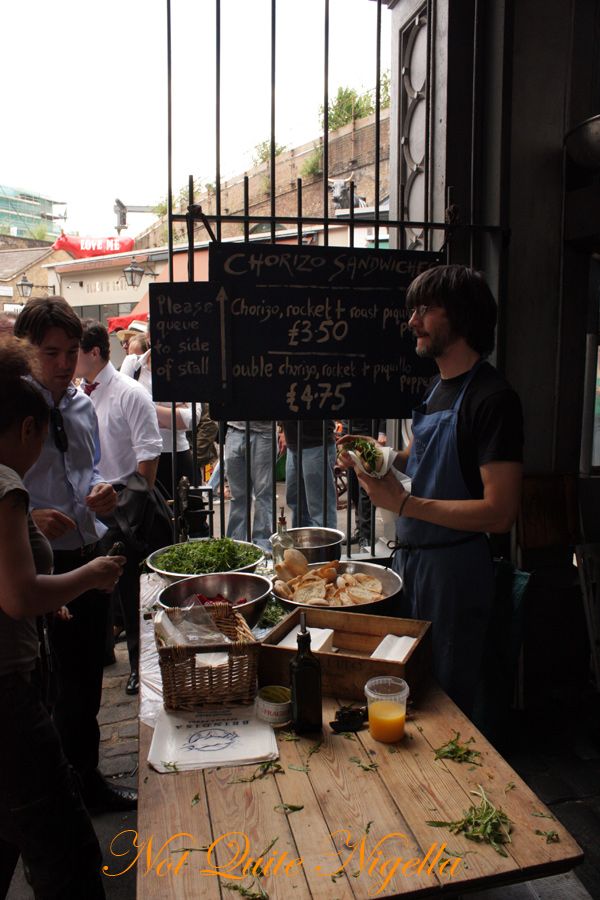 Brindisa's stall-for those who can't get a table at the restaurant, which is... everyone 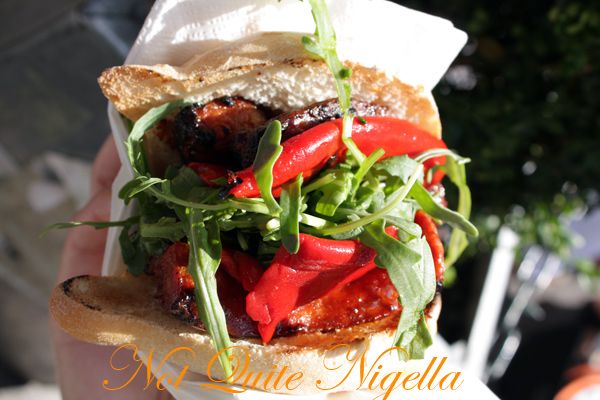 The chorizo roll is small-ish although the double amount of chorizo is good for chorizo lovers like me. It's a good sausage although I feel as though something is missing from the roll. My husband and Candy however are thoroughly impressed by it. 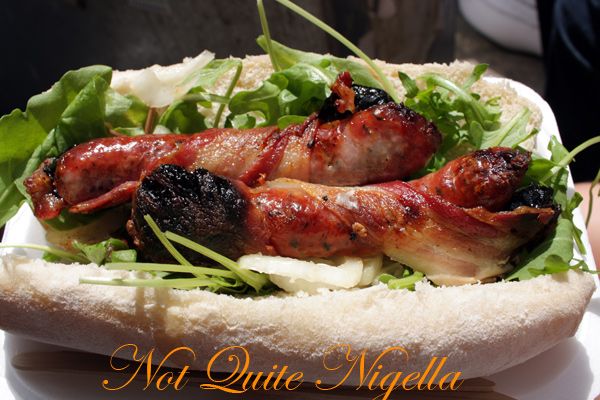 The Devils on Horseback roll with cumberland sausage wrapped in bacon and prunes is very good and absolutely enormous filled with caramelised onions and salad. The roll however is very floury and we find ourselves leaving the roll behind and eating the filling. 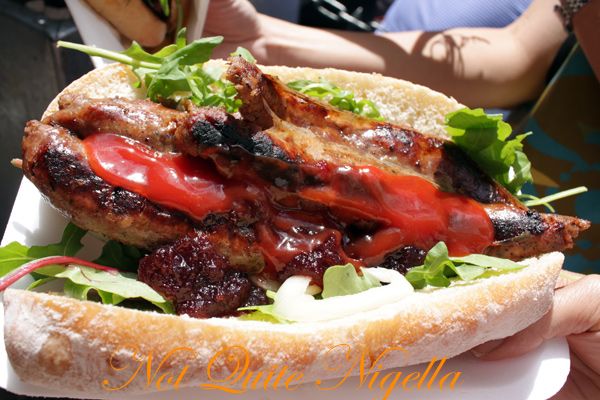 The Wild Boar sausage on a roll, also filled with onions and salad is a strongly flavoured and very meaty as promised. Adding a cranberry sauce to it helps to sweeten it and ease off the intense edge off it.

We dust the flour off our face and hands, stomachs full of all sorts of exotic goodies.