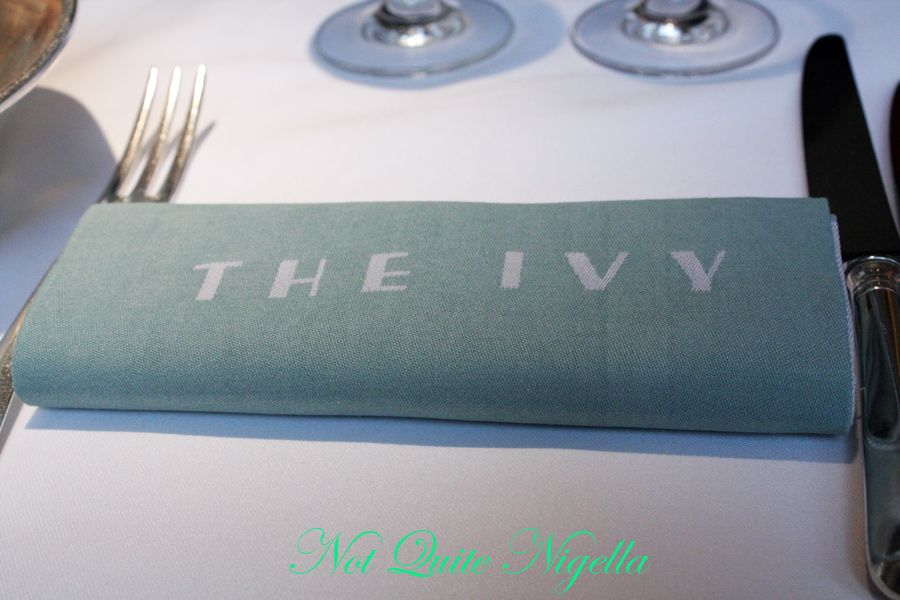 There's a reason why there are only two photos of my visit to the Ivy. The celeb count at the Ivy is apparently so high, that they do not allow photographs to be taken inside the restaurant. So all I have to offer you is a picture of the bread basket and the napkin. The Ivy is in an odd location, in the theatre district but down what looks like a back alley, right near L'atelier de Joel Robuchon. Outside of opening hours, the outer belies the mystery about this restaurant and why exactly it is so sought after as a place for celebrities to congregate. Getting a booking is not easy, one has to book weeks ahead to secure a table.

The doorman is a very genial fellow, designed to make your entrance way smooth and welcoming. The staff too are friendly and polite, with perhaps the exception of one waiter who although isn't rude, is just in the wrong business. The predominant colour is of course green in various shades and there are stained glass accents and the seating is mostly one sided banquettes. We are seated at one, both of us seated at the banquette side with the table pulled out for us to slide in so that maximum "gawking" is achieved as neither of us has our back to the restaurant.

We're handed the enormous 1 sheet menus. My sister, whilst not a regular, has been here several times and has never liked the food. However some that she has been with have so perhaps it's extremely bad luck with food choices. And you may be surprised to learn that prices are very reasonable with some very English foods like Fish & Chips, Shepherd's Pie £16.50 and Bangers & Mash £13.75 to more Asian fare. Having been told by my sister that the Shepherd's Pie, the item that the waiter tells us is their signature, is in fact not great, we opt for two dishes, the Slow roasted Blythburgh Pork belly with black pudding hash £16.75 and the Salmon fishcake with sauteed spinach and sorrel sauce £15.75. 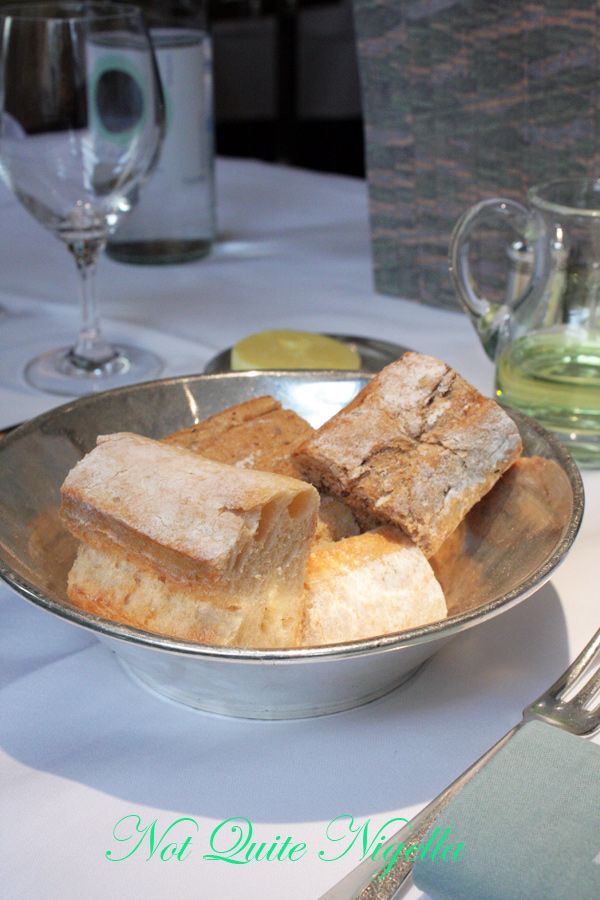 While we wait for our meals, the bread arrives with butter and it's pretty good, the butter at the right temperature for spreading. And it's not long after doing a subtle check around of the restaurant patrons (mixed: some "chav-like" but not quite Vicki Pollard, mostly middle class) that our mains arrive.

You'll have to trust me about the descriptions but it seems we are in luck. Both of our meals are very good, particularly the Slow cooked Blytheburgh pork belly which is in 4 rectangles and has a delectable crackling on it. The black pudding hash complements it wonderfully. 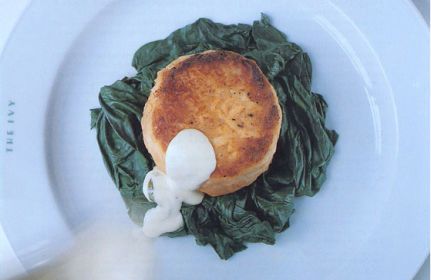 Similarly, the salmon fishcake is substantial for a single but thick fishcake, full of salmon and not filler. The spinach layer underneath is also substantial and the sorrel sauce delicious. The photo above is from The Ivy's own website which is a fairly accurate representation of the dish, although I think I could've taken a better one ;)

We're not tempted by the desserts, indeed the "star" item is the Scandinavian iced berries with white chocolate sauce looks like frozen berries with chocolate sauce poured onto it at the table. And being a good food blogger, if I can't photograph it, I'm not as interested.

And as for celebrities? I am not familiar with English celebs but I may have seen a soccer player. Well you know the kind, someone fairly good looking with a fairly good looking girlfriend that looks like they might be famous. Speaking to the staff there, they have also been briefed to be discreet although one does reveal that they are surprised at how different they look in real life - _without _the hair and makeup.