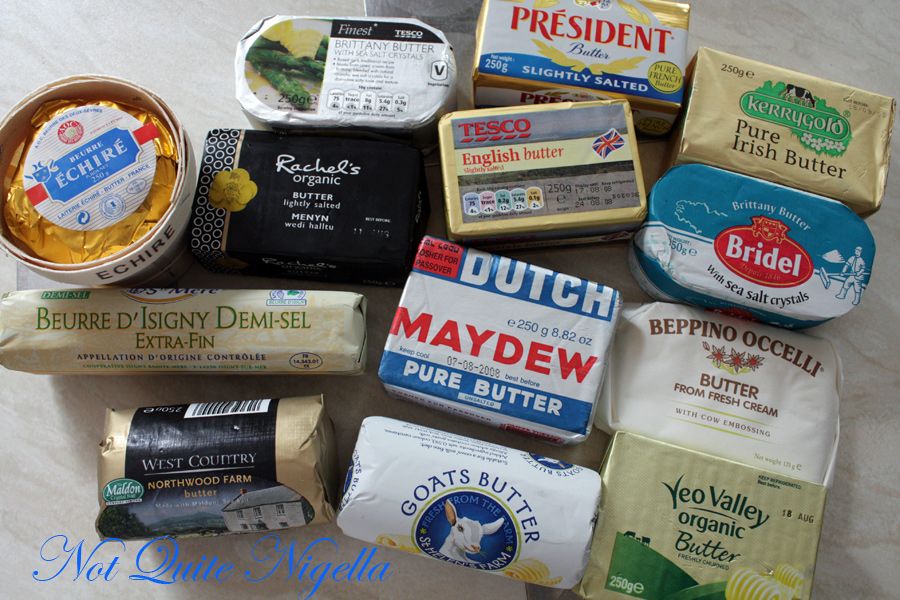 The one thing about having foodie friends is that you know that when you ask them to sample butters, they won't ask "Why?". It's taken as a given that you might want to compare the subtle tastes of butters and see whether country of origin or price plays a part in the enjoyment of the butter. Imported butters in Australia are astronomically priced, either due to the cost of importing them or sheer profit, indeed you can pay from $7-$10 for an imported butter that will retail overseas in London for £1-£1.70. So it was pre-planned with my sister that when I came to London we would do a butter taste test in order for the bank balance to not run dry.

We purchased butter from Waitrose (for the wider range) as well as Tesco (who also had some decent imports) from a variety of countries: English, French, Dutch, Irish,Welsh and Italian (unfortunately no Australian or NZ butter was available). The most expensive per weight was the Echire French butter in a basket at £13.80 a kilo or £3.45 per 250g basket. This was followed by the Italian butter, the Beppino Occelli at £1.52 per 125g which was also one of the fanciest in terms of packaging with a rivet seal and an imprint on the butter and instructions on how best to enjoy butters like a connoisseur and details of the 2 awards they won. We also had at the cheapest end, Tesco's English butter. We wanted to try only salted butters (to eliminate the variability when salting a butter yourself) but there were more unsalted butters available so it was a mix. When tasting, we spread them on a freshly baked still-warm crunchy French baguette cut in 1cm thick slices, spread thickly with butter and then sliced up so that each taster got a bit of crust as well as the inside of the bread. 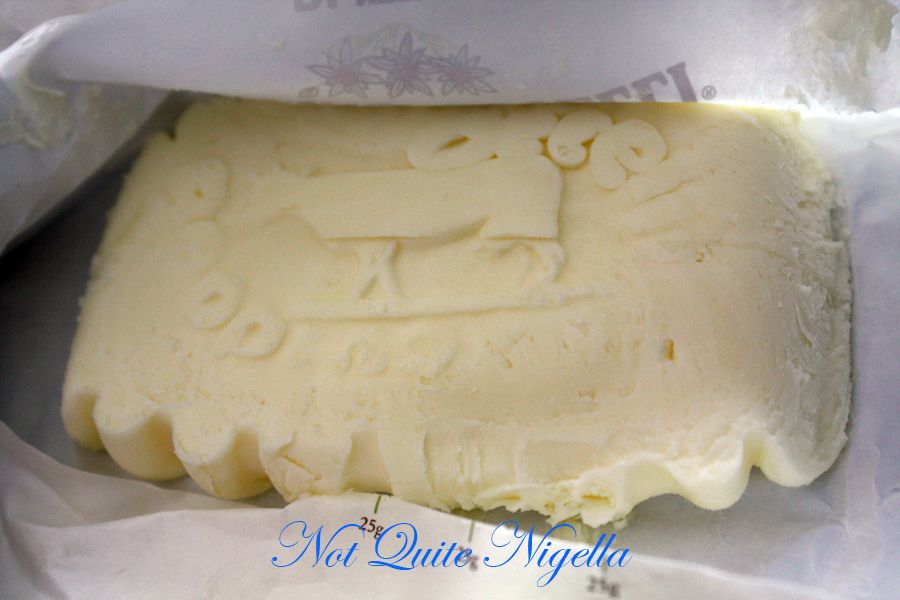 I wasn't tasting this as I was administering the test. 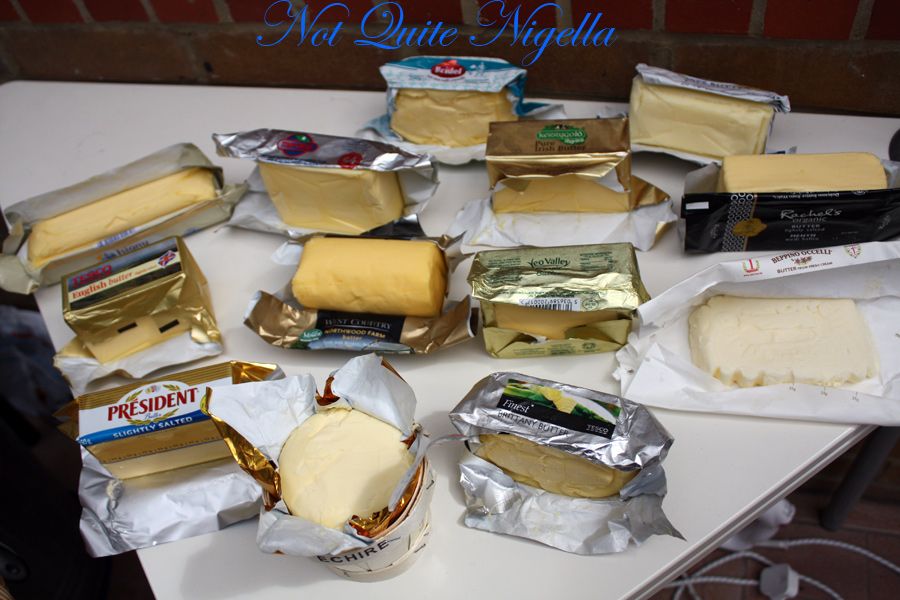 The butters ranged in colour, with some markedly paler than others (the Beppino Occelli and Goat's butter were much paler) and some became soft much quicker (the President butter came to room temperature much quicker than the rest). So even before we started, we could see clear differences in both the appearance and texture of the butter. The butters were taken out of the fridge 1 hour prior to consumption to allow them to reach a spreadable temperature.

Each taster cleansed their palette with Perrier in between sampling and were asked to write down any comments they may have and score each butter out of 10 and then give an ordinal score ranking. They were permitted to change the marks once they had tasted them in order to not disadvantage the first butter tasted.

What emerged was very interesting. The butters that had us most intrigued were of course the ones in the fancier packaging or the more expensive. However our tasters resoundly did not prefer these butters ranking them 11th of 13 (Echire from France) and last at 13th (Beppino Occelli). The cheapest butter, Tesco's English butter was also not popular at equal 9th and 10th place.

What also emerged is that on the whole the tasters preferred the French butters overall, however the Echire was one of the least liked, except by Mr NQN. U.K. butters were also judged favourably with the 3rd and 5th most popular being from the U.K. Our tasters were not from the U.K. but from Australia and the U.S.

Best to worst with rating out of 50 and comments:

Marc: preferred butters from France and the U.K.

Notes: we would have liked to include Lurpak and Lescure.

Thanks for the fantastic tasters for your enthusiasm for the task and fine palates!