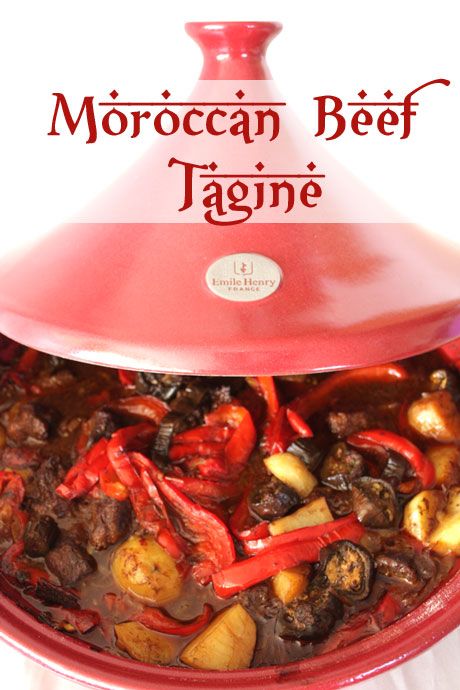 Ever since I'd had a Tagine at Kazbah I'd been literally pining for one. I had dropped not too subtle hints to no avail as it was already past my birthday and long before Christmas. Until the kind people at Kitchenware Direct sent me a gorgeous Emile Henry Red Tagine to road test. I liked the look of the Emile Henry Tagines as it had a designer badge (old habits die hard and extend to cookware) but the fact that Kazbah used them meant that it was suitable for frequent use and was therefore durable. 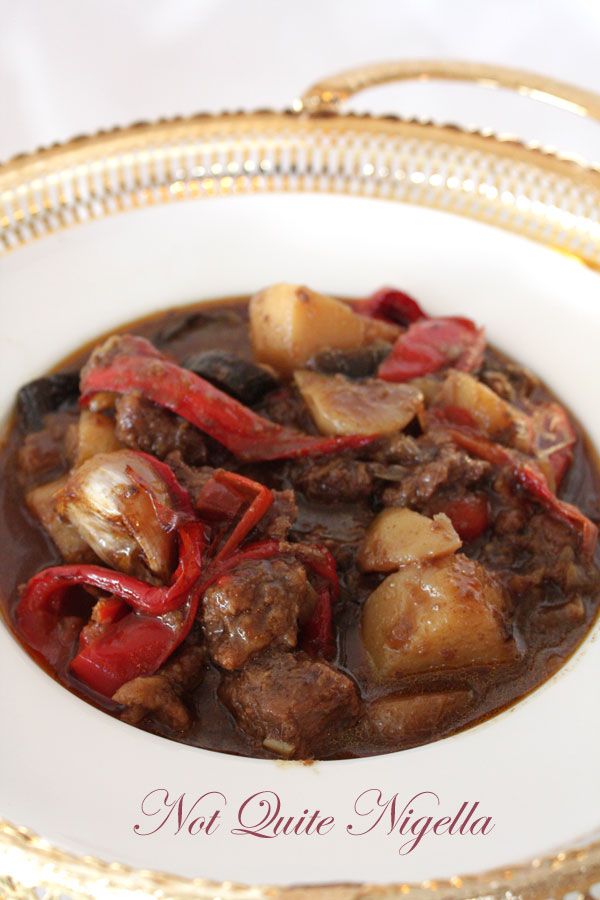 I was curious about these, having been warned that they required all sorts of treatment prior to use and all sorts of sorcery and being short of eye of newt, I had shied away from making an actual purchase. However a friend of mine has one and uses it all the time and said that they're a cinch to use. When we went over to her house for dinner, she cooked up a gorgeous beef tagine and kindly passed on her recipe. 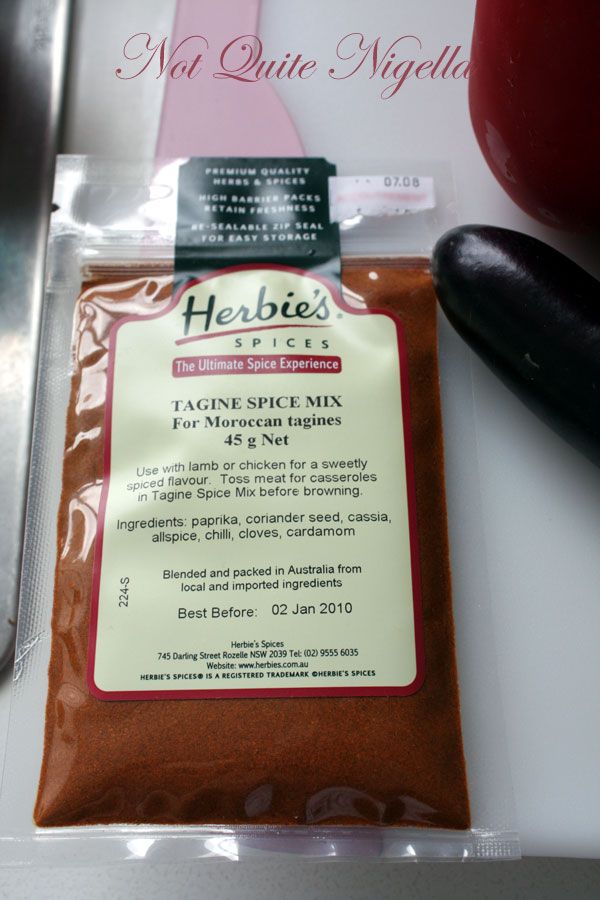 I rejigged it slightly, well actually simplified it, by buying a packet of Herbies Tagine Spice mix in place of the herbs and spices although I've added the spice measurement in case you can't get a hold of the Herbies Spice mix. If you can, do buy a packet, I've tried the Tagine using their spice mix and also using the herbs and spices below and I can say unequivocally that using the Herbies mix makes it that much more aromatic and richly gorgeous. I realise that I'm not being totally traditional (Lamb is more traditional than Beef) and by serving this with creamed polenta instead of couscous is no doubt a politically incorrect culinary faux pas but I had polenta to hand and not couscous. Given the syrupy thick sauce that was in desperate need of soaking up greedily , I figured the creamed polenta, an alternative version to mashed potato, would do quite nicely and it did. 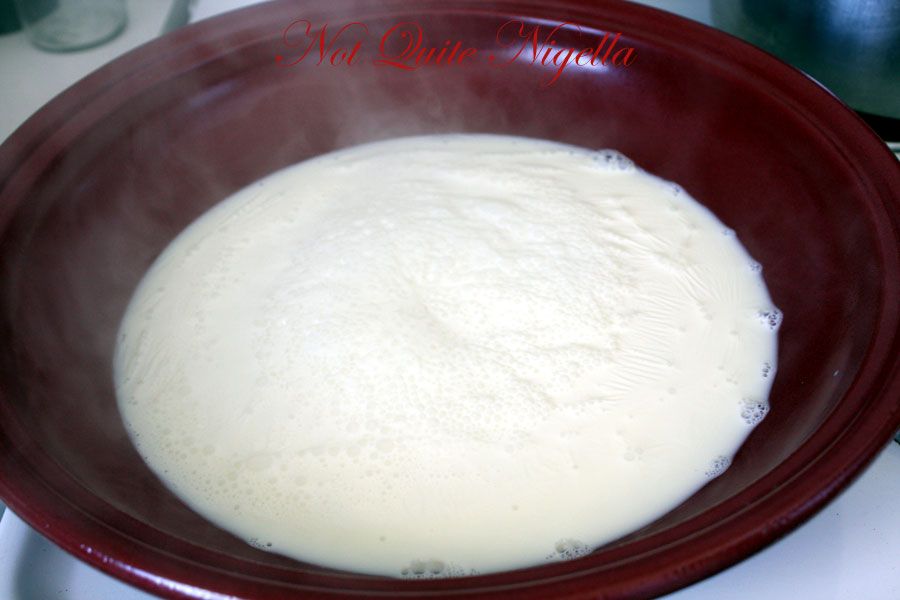 Before first use, boil with milk. No sorcery required

As soon as I opened the box, I grabbed the pamphlet inside the Tagine and read it carefully. It didn't require some sort of super Harry Potter wizarding skills but rather it just needed to be filled with milk, heated til boiling and then cooled and then washed with warm, soapy water. That bit was easy (although before anything else, you should definitely remove the very sticky sticker on the bottom of the Tagine!). I was also cautioned against the following things: 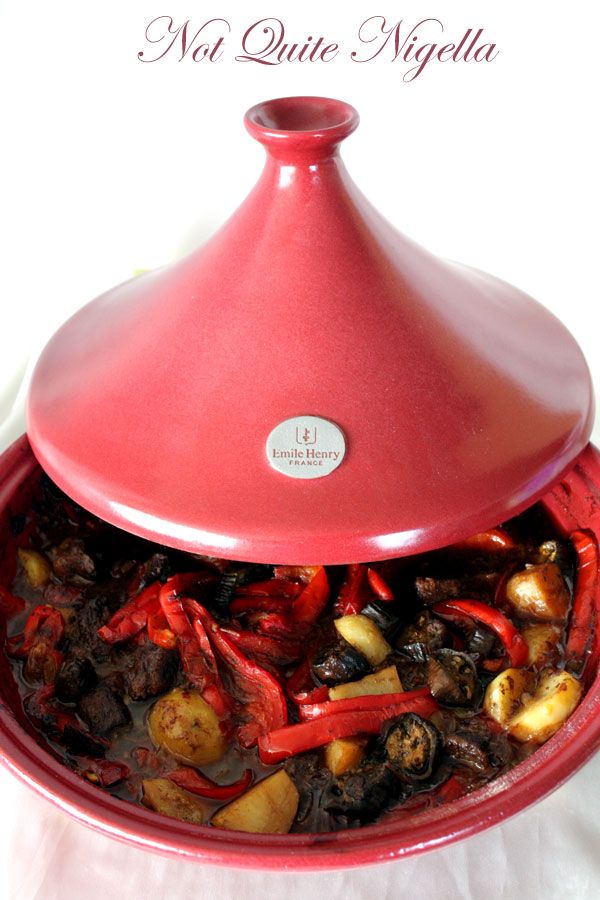 The smell of this cooking is immediately beckoning and should you decide to have this at a dinner party, you could always tempt (or torture depending on how you look at it ;) ) hungry guests with the mouth watering smell although I cannot be responsible for any ensuing riots. And don't even think of packing it away in the cupboard, a beauty like this can be used as decoration around the house, provided it is cleaned properly of course.

Step 1 - Put the flour and spice mix into a large plastic or Ziplock bag and season well with salt and pepper. Add the beef and give everything a good shake so that the beef is well coated with the spiced flour. This bit is fun and I'll use any excuse to use a Ziplock bag. 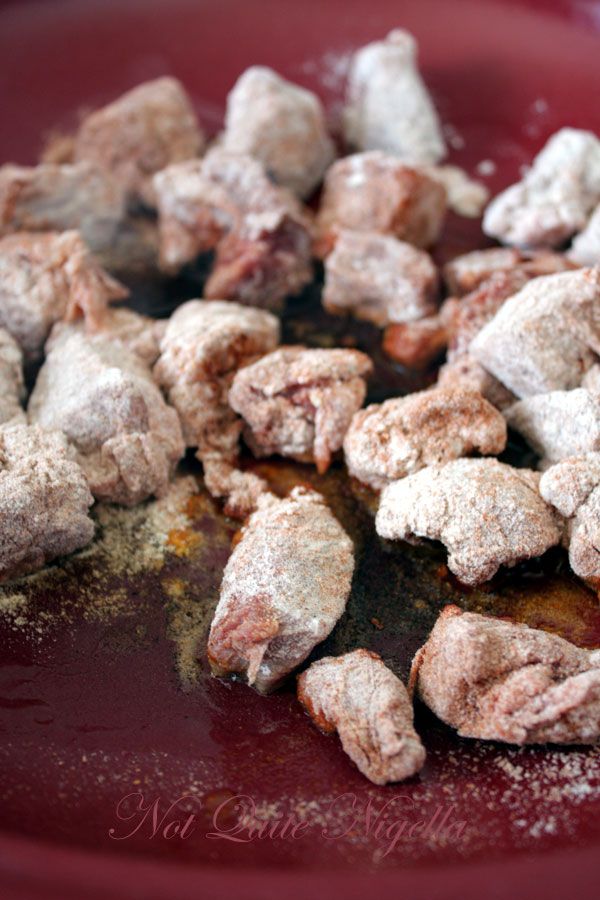 Starting to brown the beef

Step 2 - Put 2 tablespoons of oil in the Tagine and place on the hob to heat on medium heat. Fry the beef, in two or three lots, until nicely browned all over (you may need to add more oil). Transfer the meat to a bowl. 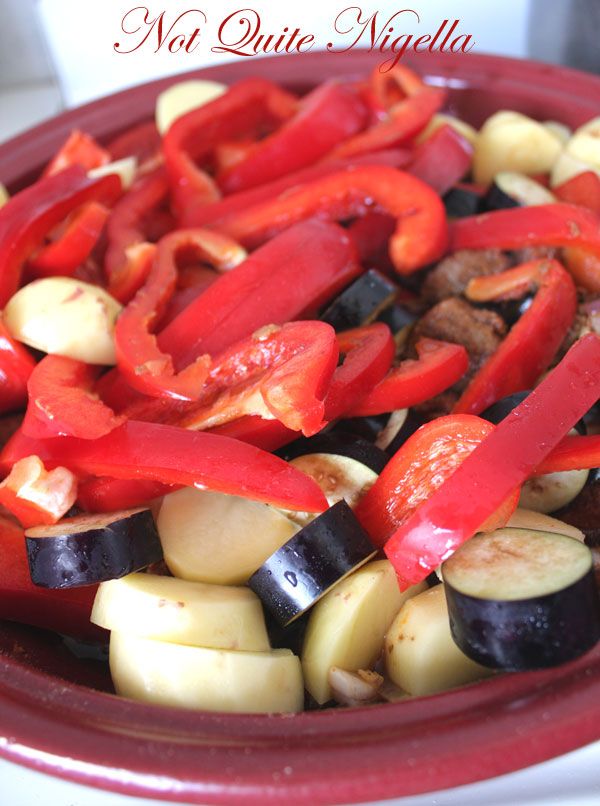 Step 3 - Then gently fry the onion in the remaining olive oil until softened. Add the meat back into the Tagine and scatter the whole garlic cloves, sliced peppers, eggplant and potato chunks over. Stir the honey into the beef stock and pour over the beef. 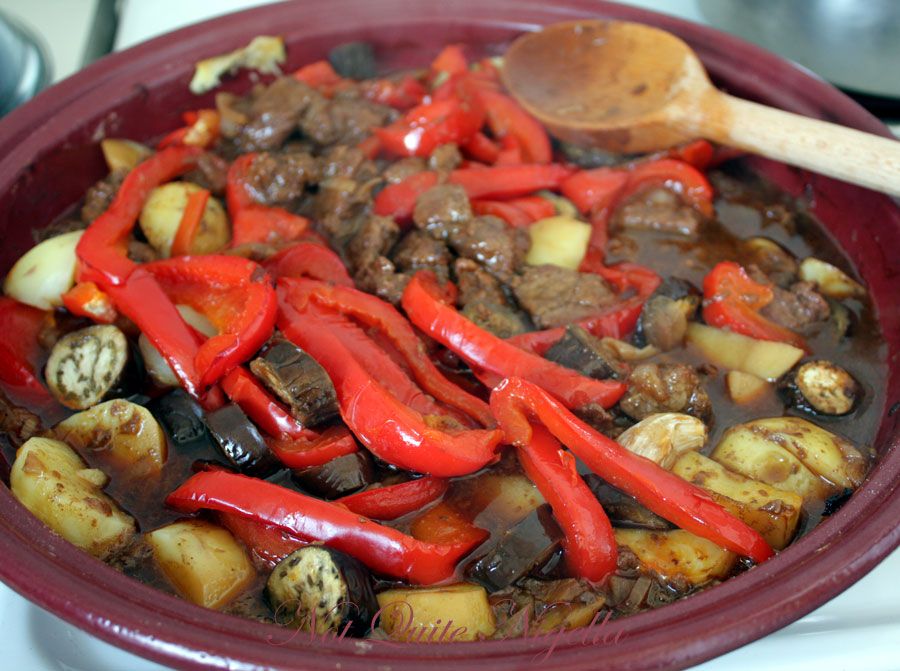 After one hour, stir it around so that everything is coated in the deliciously fragrant sauce

Step 4 - Put the lid onto the Tagine and cook on the job over a gentle heat or cook in the oven at 190c (I put it in the oven) for about 1 hour. After an hour, stir the contents as they will have reduced down and try and coat all of the pieces with the deliciously scented gravy and replace the lid and continue to cook for a further 30 minutes or so, until the beef is meltingly tender. Stir in the chopped coriander if desired and serve immediately with buttery couscous and a handful of raisins stirred into it. 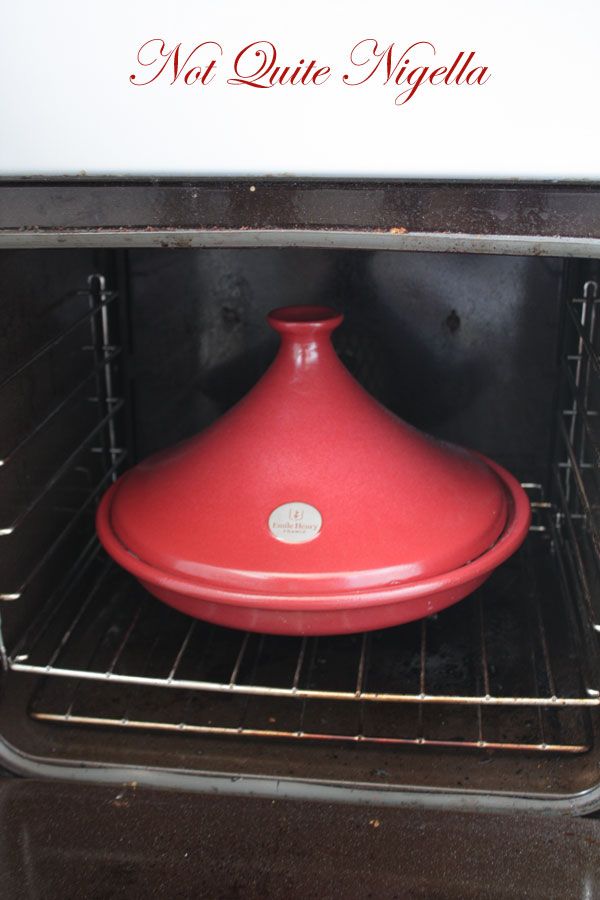 36cm Emile Henry Tagine available from Kitchenware Direct. Oh and they price match too which is handy to know ;) 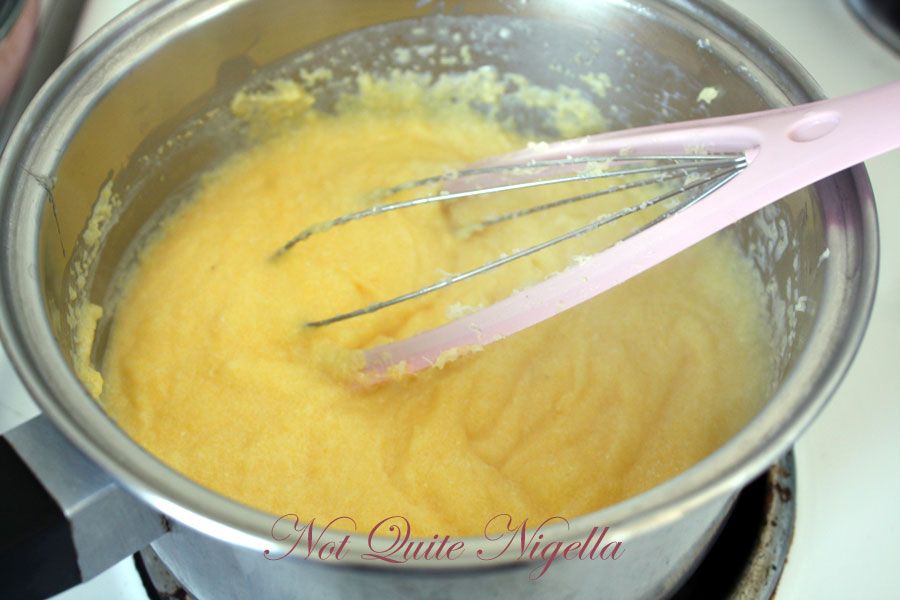 Step 1 - Combine milk and water in a saucepan. Bring to the boil over medium-high heat. Add polenta, stirring constantly and reduce heat to low.

Step 3 - Add cheese and salt and pepper to taste. Serve immediately as this will set firmly or if you prefer this to be set pour into greased dariole moulds to set (and use 1 1/3 cup of Polenta instead of 1 cup so it is thicker and therefore easier to set).