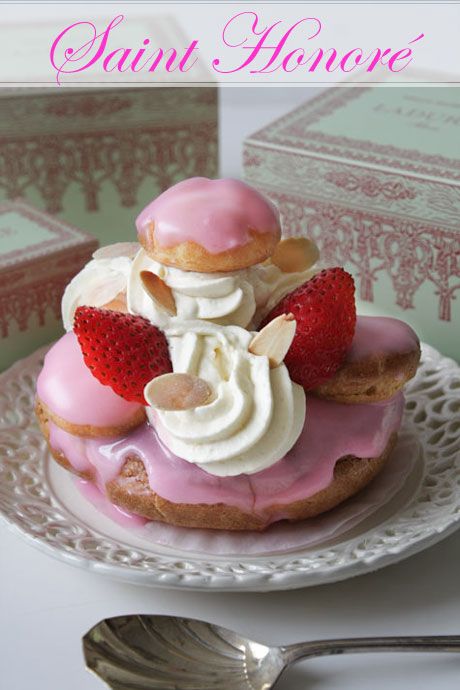 I've mentioned a few times that I'm not a particularly religious person but if I were to aspire to Sainthood for any reason it would probably be to a food related saint. Saint of Foolproof Recipes anyone? The pastry I made today was named after Saint Honoré, the patron saint of bakers and pastry chefs. 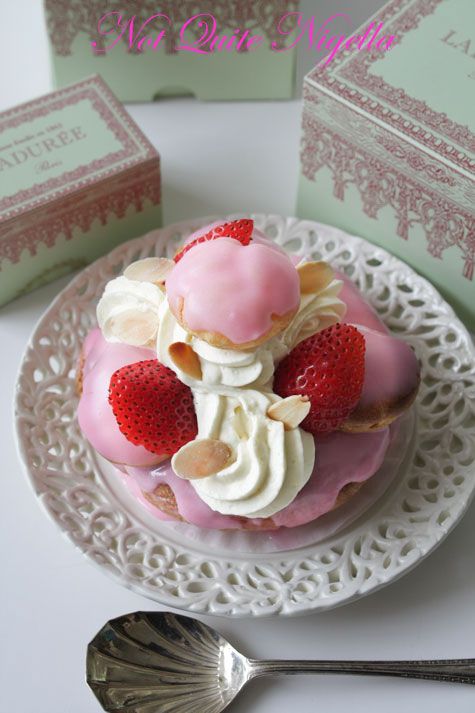 I had somewhat of a success with the Religieuse, something that I frankly thought I'd never make. Ask me one year ago when I was busy chowing down on one amid much orgasmic murmuring and moans and I would have looked at you like you had suggested I use instant mash potatoes. I would have been horrified at the thought of trying to make these. But time makes some people wiser or in my case, more foolish and riskier and so I entered my teenage years of pastry where I wanted to try anything and everything to do with making pastry from scratch. 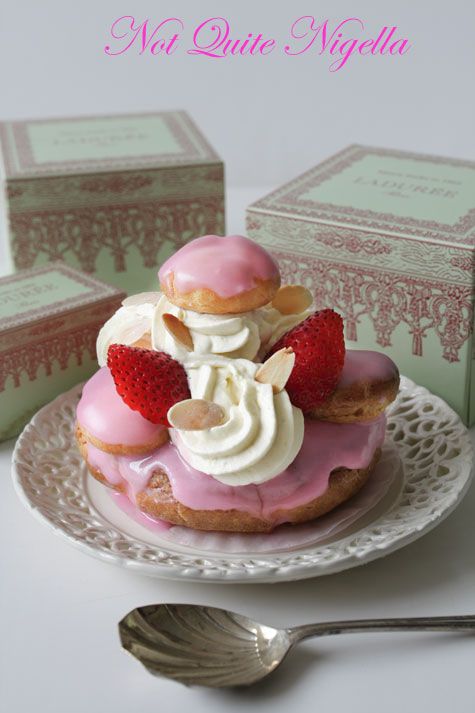 The bottom choux weren't quite as puffy and didn't hold their puff as much as the smaller ones. And if you're scared at all, know that the star piped whipped cream, like a black dress, hides a multitude of sins. I know that tradtionally this would be made with a Chiboust cream but I have to confess that I'm addicted to creme patisserie and prefer this slightly over Chiboust cream. I apologise for the lack of in progress photos while making these. I was by myself and found it difficult to switch between creating and taking photos. 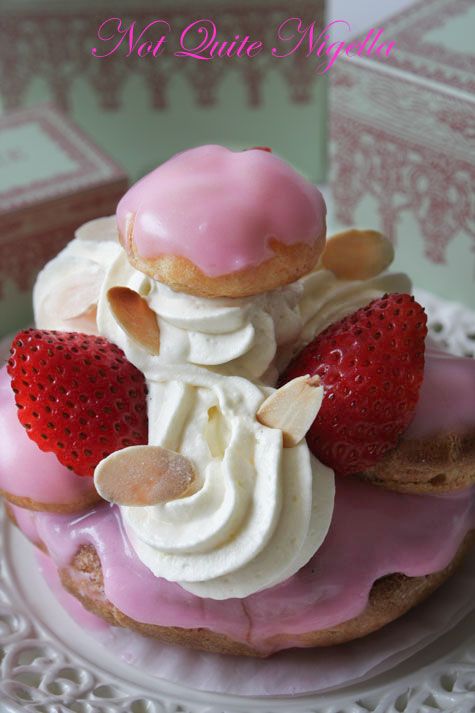 Was it worth the trouble? Absolutely. There is something so decadent and lusciously delectable about a St Honoré that like childbirth (so I hear), the result is so glorious that you forget any sort of pain you may have experienced.

So tell me Dear Reader, what to you is painful but worth it? 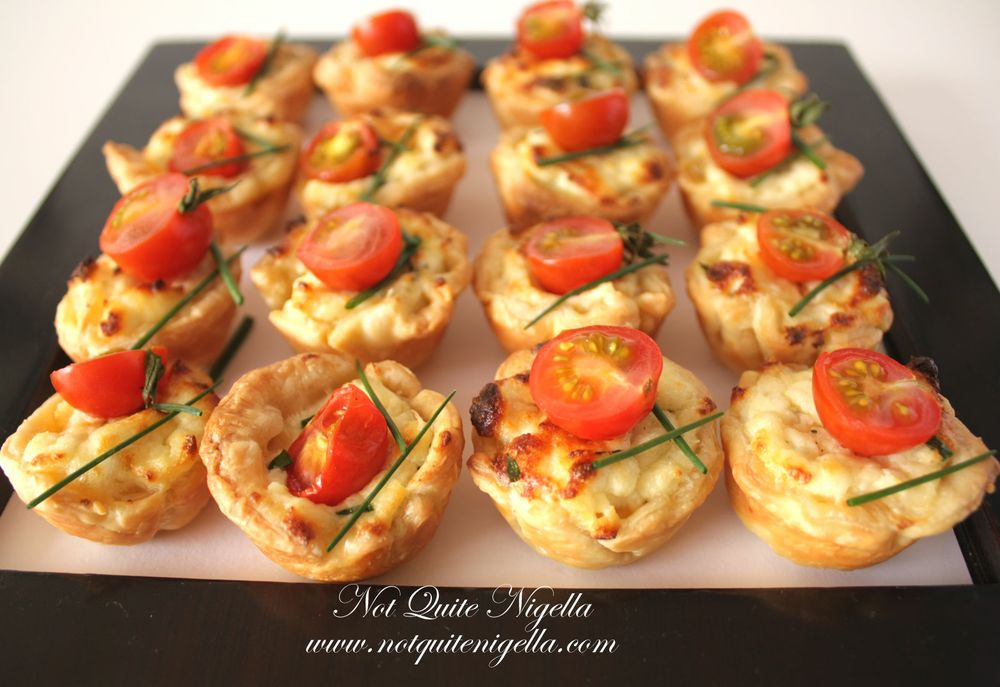 And because it's Wallpaper Wednesday again, allow me to give you, the Ricotta, Chive & Tomato tart Wallpaper! Happy Hump Day :)

Step 1 - To make the pastry cream, place milk in a saucepan. Heat gently until the milk almost boils. Remove from the heat, whisk the yolks, sugar, colouring, essence and cornflour in a bowl until thick and pale. Gradually whisk in the warm milk. Return mixture to same saucepan and stir over medium heat until the custard boils.  Spread over a tray to cool rapidly. Cover the surface of the custard closely with plastic wrap to prevent a skin forming, at 55°C transfer to a bowl and stir through butter and refrigerate to cool completely.

Step 2 - Preheat the oven to 210 degrees celsius convection. Lightly grease 4 oven trays and set aside. Combine the butter with water, sugar, milk & salt in a large heavy-based saucepan and bring to the boil. Remove from the heat and using a wooden spoon quickly beat in the flour. Return to the heat and continue beating until the mixture comes together and leaves the side of the pan. Cook, beating over low heat for 1-2 minutes to cook flour. Remove from heat and allow to cool slightly.

Step 4 - Spoon the mixture, in batches, into a piping bag fitted with a 1.25-1.5cm nozzle. Cover remaining pastry with cling film. Pipe mixture onto trays leaving room for spreading. Pipe 6 large circles (about 11cms/4.5 inches diameter) and 24 small circles (about 2.5cms/1 inch in diameter). If you have extra pastry make extra in case some don't work out. Bake larger ones for 20-25 minutes, in batches and smaller ones for 15-20 minutes or until firm and hollow when tapped. Prick a small hole in the bottom with a skewer to release the steam and return to the oven to completely dry out for 5 minutes. Transfer puffs to wire racks. 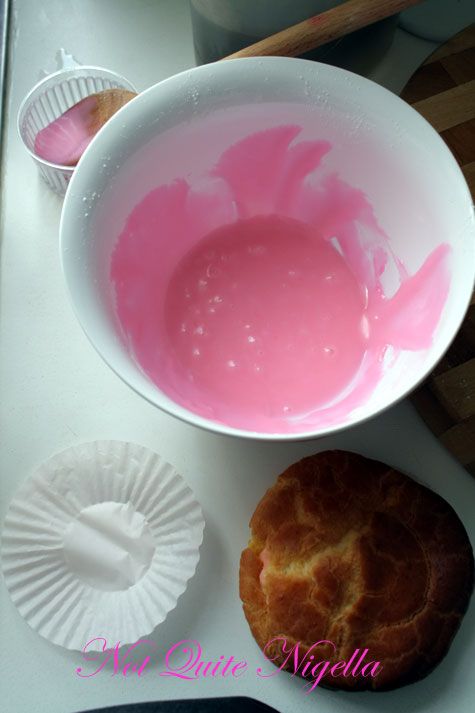 Step 5 - Put custard into a piping bag with a nozzle less than 1cm. Poke a hole in the base of each large puff-if they have collapsed you may need to insert a finger and clear a space before filling with custard. Do the same for the small choux puffs.

Step 6 - Make the icing by placing sifted icing sugar in a bowl. In a small bowl mix the colour and essence with 1 tablespoon of the boiling water. Then add this to the icing sugar and stir until smooth. Add more water 1 tablespoon at a time until it is a dippable consistency that is not too runny.

Step 7 - Dip the puff bases in enough icing to coat and place icing side up on a tray lined with baking paper.

Step 8 - To assemble this, take the filled and iced large puff and place 3 filled and iced puffs on top at equal spaces to each other nearish to the edge. Place whipped cream in a piping bag and attach a arge star nozzle and make a pattern with the cream. I did figure 8's but you could really do what you want as long as it's pretty and swirly. Place 3 strawberry slices on each and then top with another small choux. Garnish with toasted almond flakes.

N.B. The puffs and custard can be made separately ahead of time and can keep in an airtight container for 3-4 days. If the puffs become soggy you can refresh them in the oven by baking them on 180C for 5 minutes until they become crisp again. 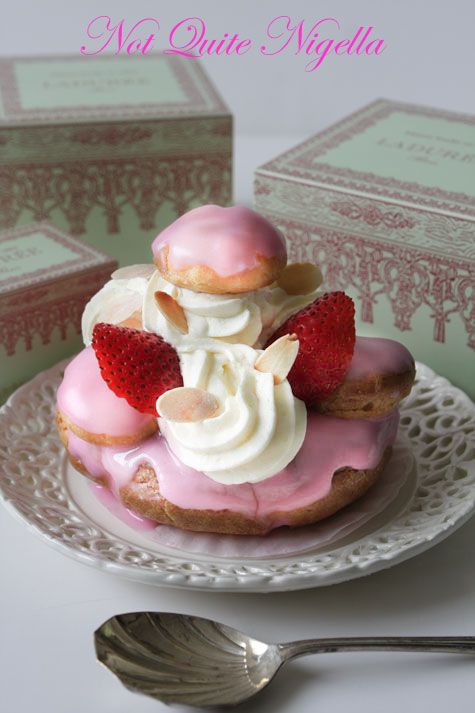