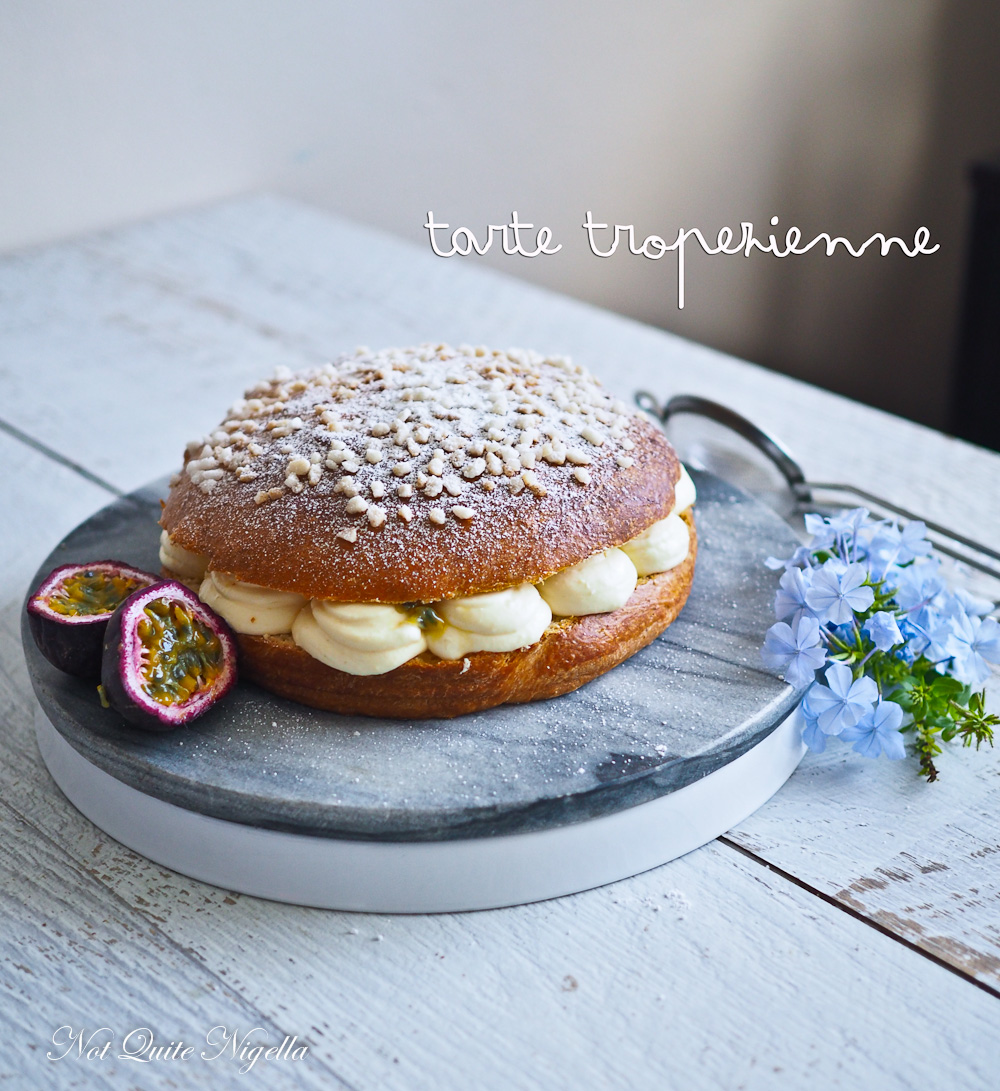 A cake made out of buttery brioche, sliced in half and filled with orange blossom and vanilla creme patisserie, whipped cream and dotted with pearl sugar? It would be none other than the Tarte Tropézienne!

As the name suggests this cake has its roots in Saint-Tropez. Its inventor was Polish immigrant and patisserie owner Alexandre Micka whose patisserie still stands today named after his famous creation "La Tarte Tropézienne". It got its name in 1955 from actress Brigitte Bardot while she was filming "And God Created Woman" in Saint-Tropez. Micka was hired as the film's caterer and the whole cast and crew loved it so much Bardot suggested naming it "La tarte de St. Tropez" i.e. the tart of St. Tropez after the French Riviera town although it isn't actually a tart at all.

The topping on the Tarte Tropézienne is either a streusel or pearl sugar. While I love buttery streusel I was busy and a sprinkle of pearl sugar proved to me to be much more convenient. Likewise the filling is sometimes Crème Diplomat (pastry cream, whipped cream and gelatine), Crème Mousseline (pastry cream and butter) or Crème Chiboust (pastry cream and meringue). Micka kept the actual recipe very close to his chest so these were all guesses at the real recipe. 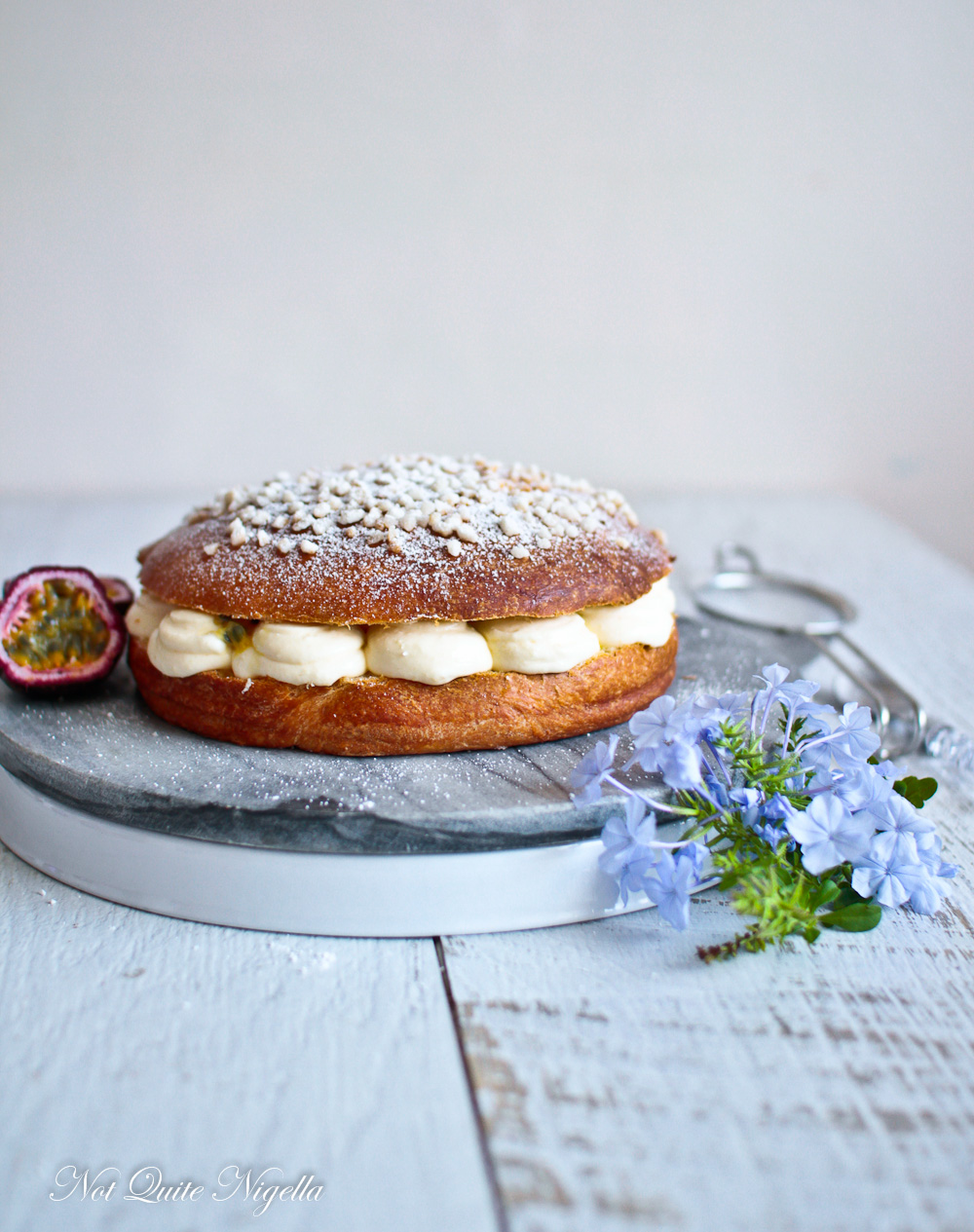 I decided to go for Crème Diplomat because I wanted to make the dollops a bit more set with the gelatine and I wanted them to withstand the warm Autumn weather that we were still experiencing. I also added passionfruit because I love it and it seemed to fit (and can I just say, it really works with this tart?). And I feel a little touch of history and retro charm when I ate this tart which was created all those decades ago even though I haven't even seen "And God Created Woman".

Speaking of retro charm, a film that was very popular this year at the Oscars (envelope mixup notwithstanding) was La La Land. And recently when Mr NQN and I went away with Nina and Garth they told us that the film inspired them to do something in their regular lives.

"One night we decided that we wanted to live in a musical," Nina explained and they both agreed that whenever one of them would say a line that also happened to be a line from a song they would burst into song and dance, just like in a musical. 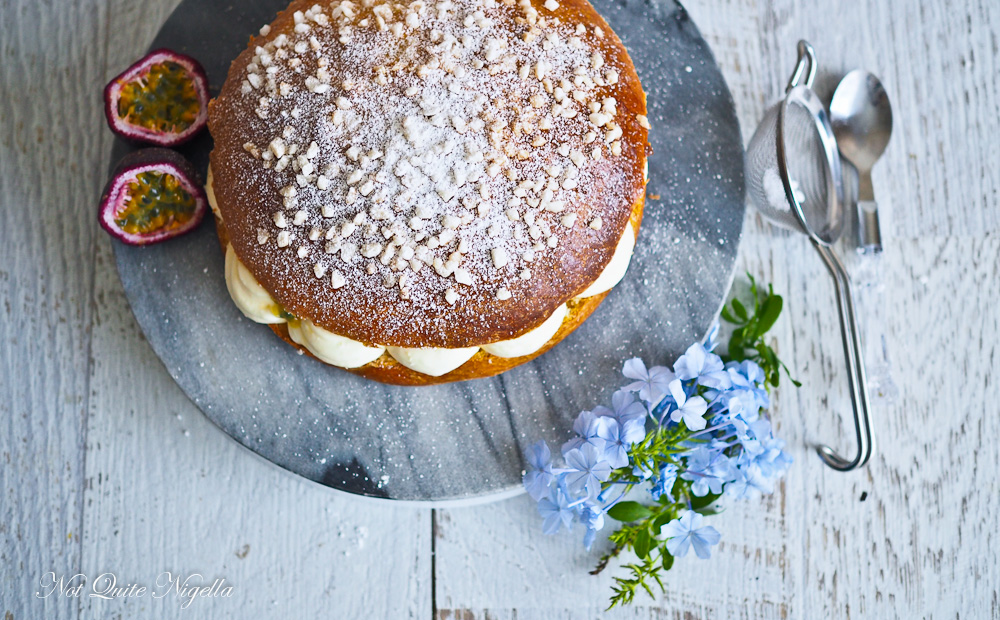 It happened a few times during the weekend. We'd all be having this normal conversation and then the words "I will follow you", "Time to say goodbye", "All by myself" and "A whole new world" would prompt either Nina or Garth to start singing accompanied by large hand gestures and a little dance. Okay it wasn't choreographed and lasted only a few lines but it was rather fun and special to watch! Hey who says that your life can't be a musical? It's really only a matter of choice! 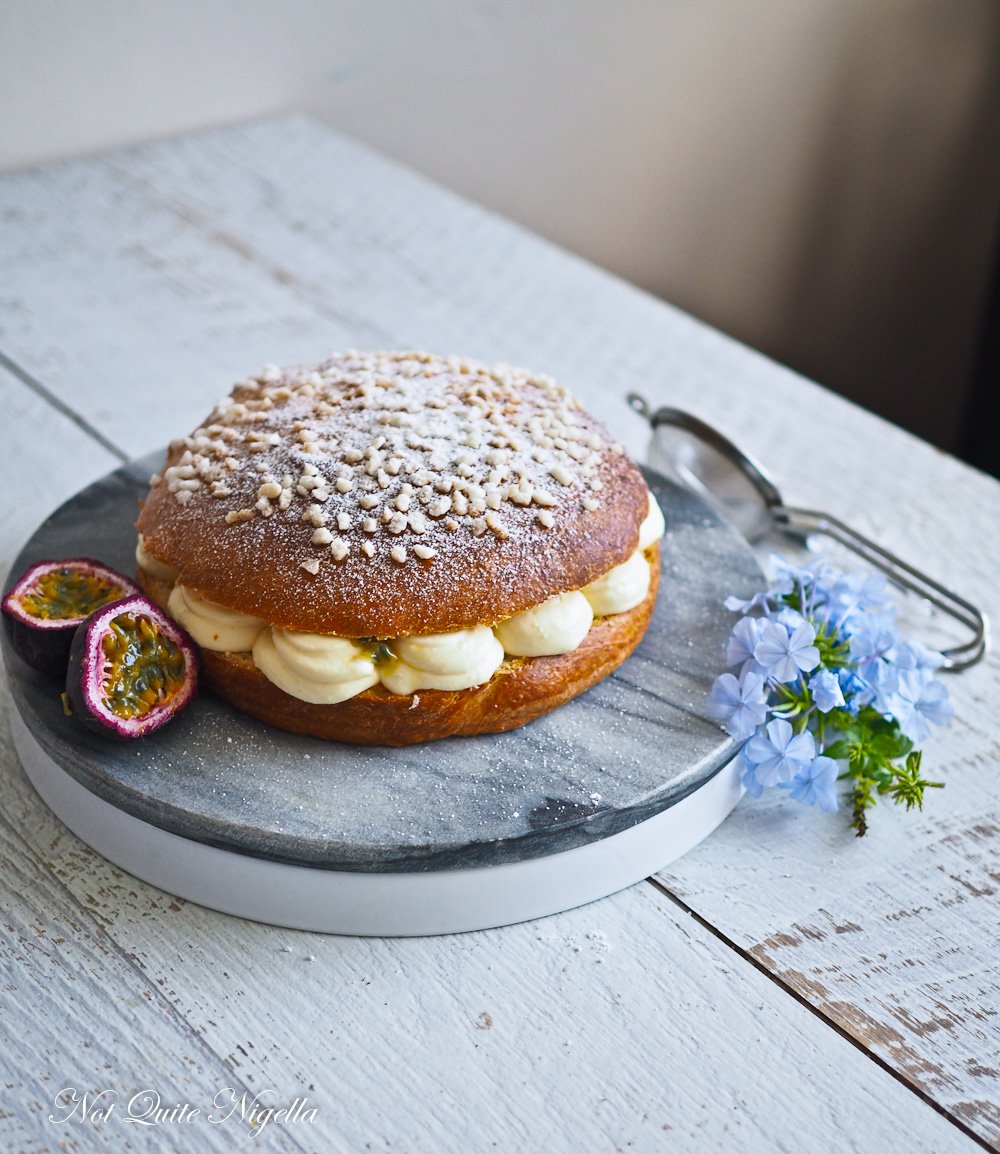 Step 1 - Place the bread flour, sugar, milk, yeast, eggs and butter in a bowl of a mixer fitted with a dough hook. Stir the ingredients with a spatula to combine and then knead on the lowest setting until elastic and the dough is able to be stretched without breaking. Shape into a ball and cover with cling film and keep in a warm place to rise.

Step 2 - After about a n hour or so, punch down the dough and then knead in the salt. Place in a covered bowl in the fridge overnight.

Step 3 - The next day remove the dough from the fridge and allow it to come to room temperature for an hour.

Step 4 - Then make the creme patissiere. Whisk the sugar, cornflour and egg yolks together and then pour in the milk while stirring with a spatula. Keep the heat on low and create a custard making sure that it doesn't stick to the bottom of the saucepan. Remove from heat and add orange blossom water and vanilla. Meanwhile, soak the gelatine sheets in cold water and then add to the hot custard. Allow to cool completely. 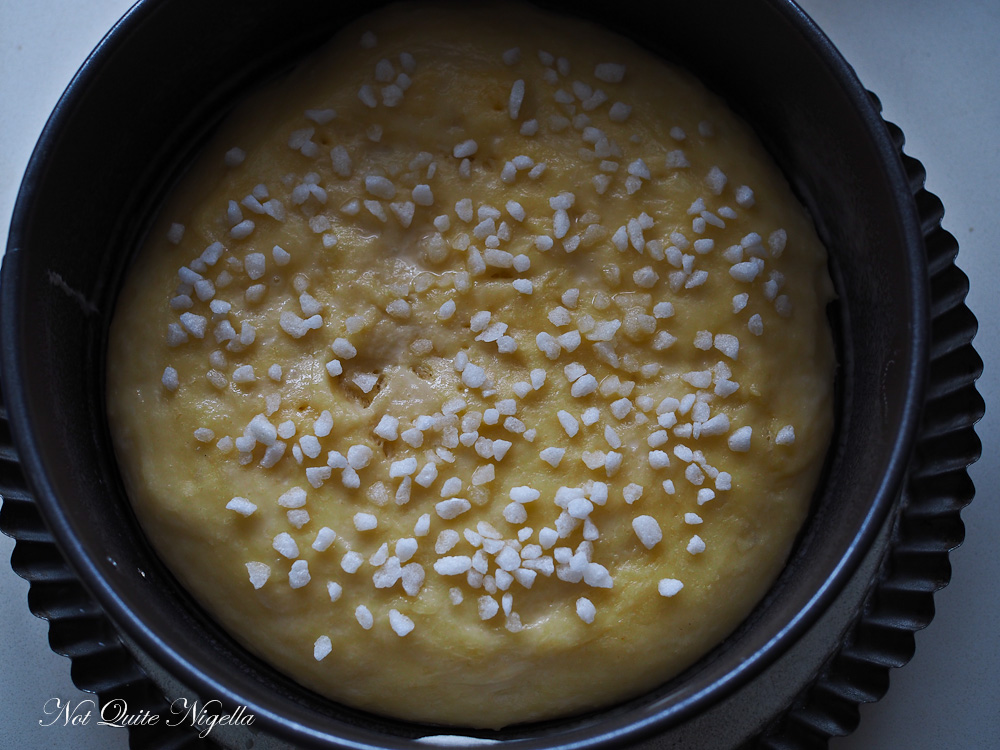 Step 5 - Shape the dough into a round and place on a baking tray with a ring around 20cm to keep its shape as it rises and bakes. Allow to rise again for 30 minutes. Preheat oven to 180C/350F. Brush with milk and sprinkle with pearl sugar and bake for 25 minutes (I baked mine for 30 minutes and it was a bit dark). Remove ring and allow to cool on a cooling rack. Slice in half horizontally. 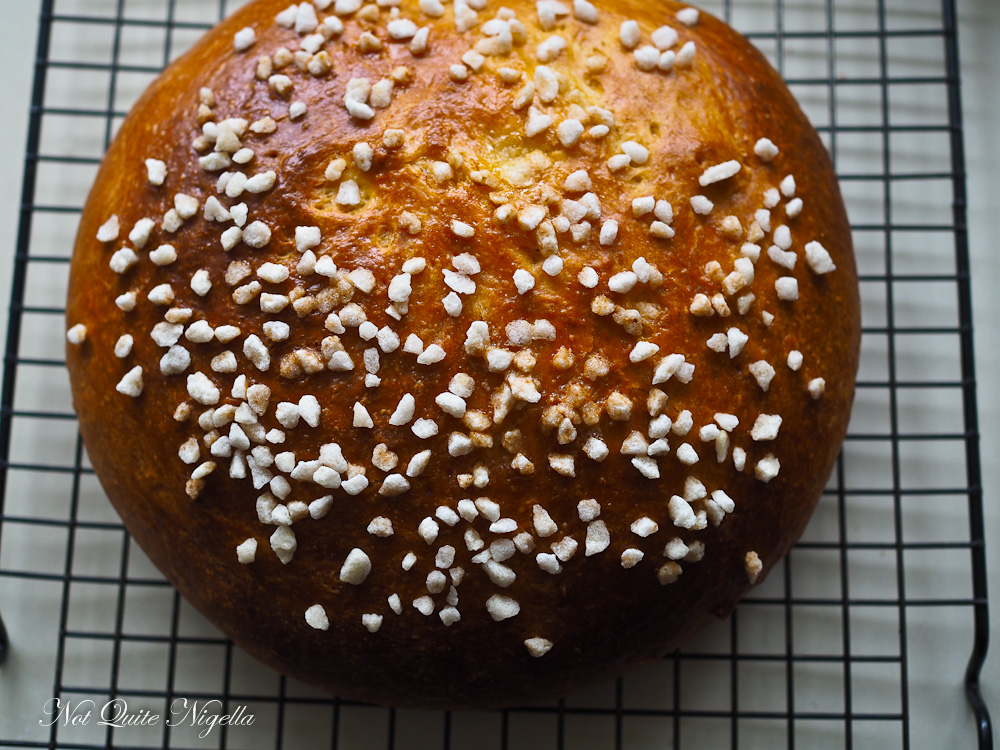 Step 6 - Whip the cream until you get firm peaks and then mix with the creme patissiere mix. Place in a piping bag with a #11 plain large tip and pipe dollops (or you can spread this onto the brioche with an angled spatula). Top with the flesh and seeds of a passionfruit (my adaption) and then place the other half on top and sift icing sugar on top. 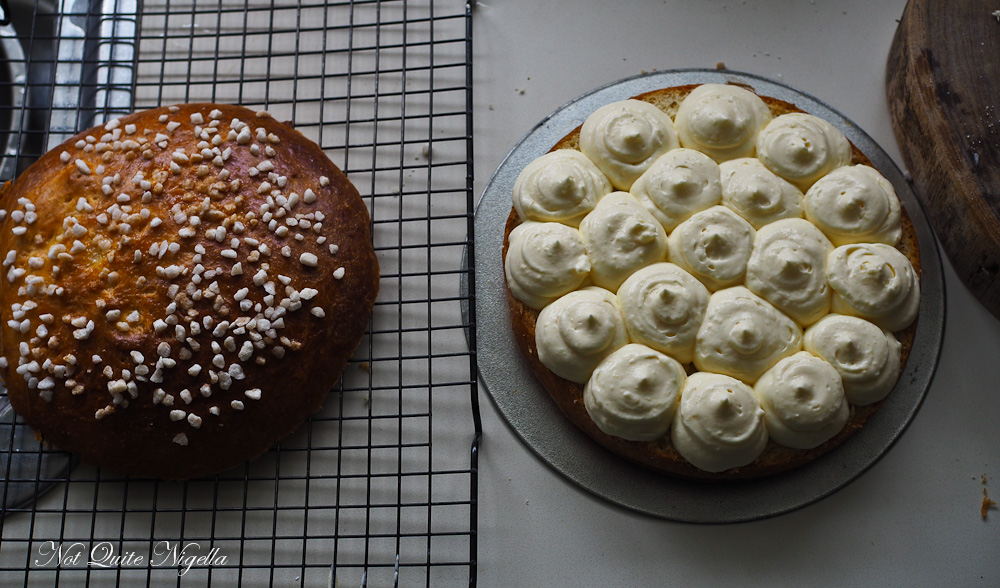 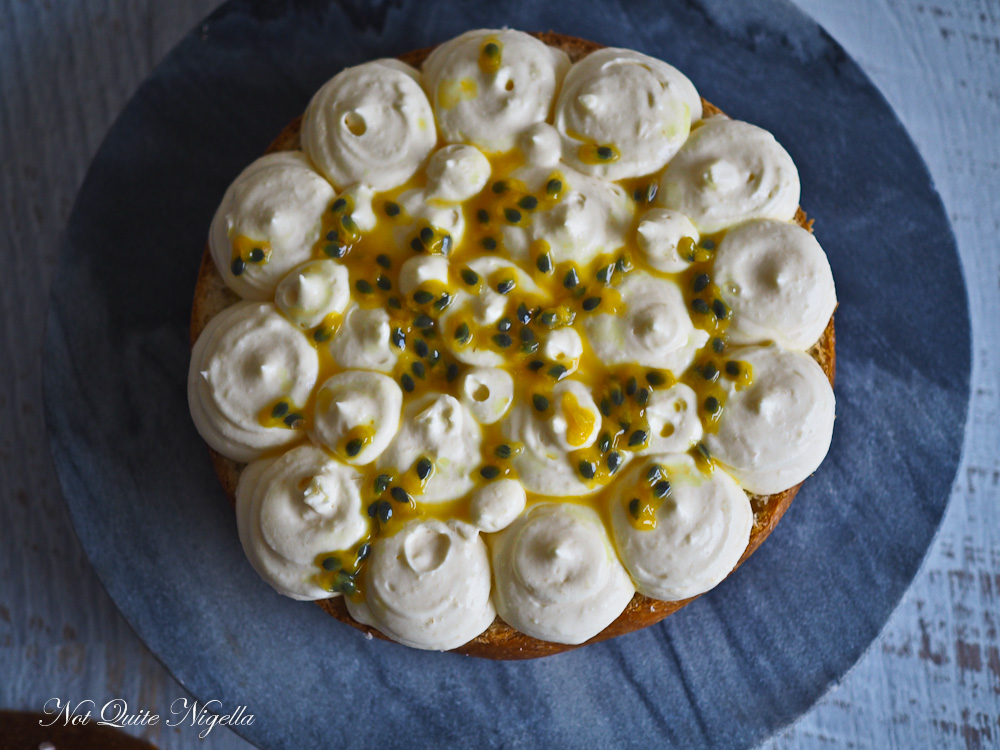