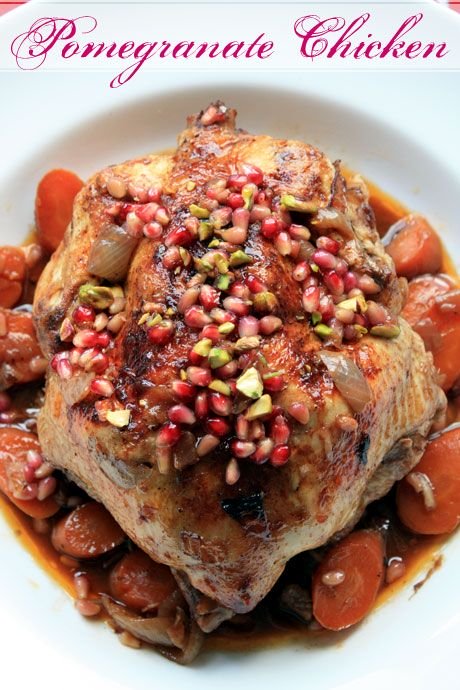 I was perched on the top tier of my pink stepladder and shooting a picture of a roast chicken from above and my neighbour had come out onto his balcony and proceeded to stare at me like I was a freak. Perhaps I was and just didn't know it and in a moment that just emphasises how freaky I had become, I clicked away not caring. Hello ladies and gentlemen. I am a food blogger and a food blogging addict. 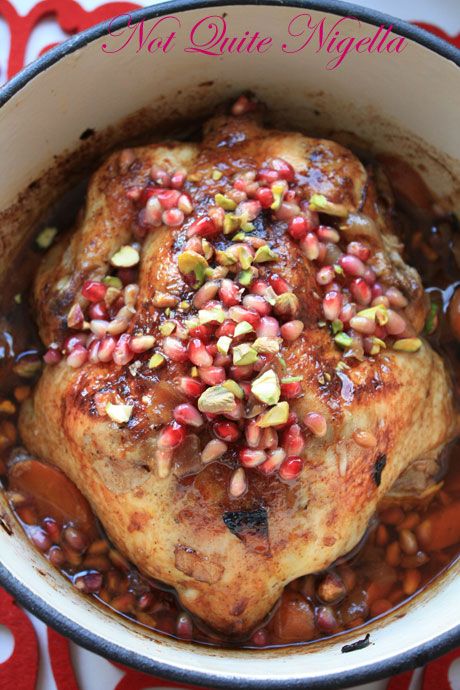 It was Melbourne Cup day and it was ferociously hot. I had shut myself inside for the day drawing all blinds and curtains. I had a gorgeous organic, free range chicken that was just begging to be made though and like an addict my fingers twitched to make it so I grabbed some cookbooks and flicked through them. I had been sent the Buon Ricordo book to review and I had gone through it tagging recipes to make.

The one section that caught my eye though was the last one, where Armando Percuoco talks about the restaurant staff as family and explains the process for the staff meals which occur at 5pm every day He gives recipes for the meals that the young chefs prepare for the staff which allows them to gain confidence in the kitchen with their own dishes and allows Armando to keep a check of the amount of salt and dressing that they use but he says that the best part is being surprised when a chef draws on their own background to create something far from the Italian origins. 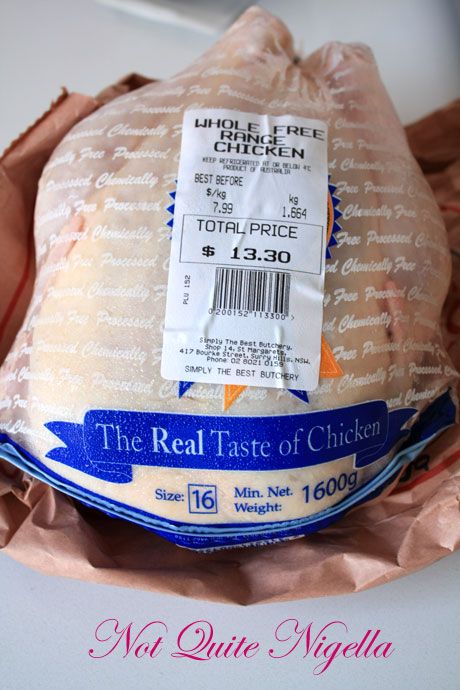 I had intended to make an Italian dish as part of my review but one recipe was crying out to be made on that day. I had this gorgeous chicken which I picked up on the weekend while on a Surry Hills walking tour. We were introduced us to an amazing butcher Terry from Simply The Best Butchers on Crown Street who is a wonderful guy who gives great cooking advice and sharpens knives for customers and is everything that you'd want your butcher to be and more. He gave us sausages and schnitzel to try and I couldn't help but buy a free range, organic chicken to take home for later. And so this recipe called Gemma's Middle Eastern Chicken (Gemma being the Buon Ricordo manager and Armando's wife) ended up being the one I made first as I had some ripe Pomegranates that had to be eaten, some Pomegranate molasses, brandy and a gorgeous chicken. 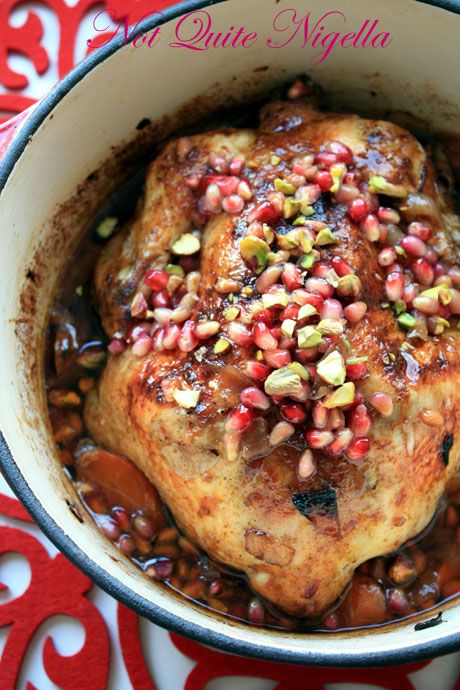 The recipe calls for two 1.5kg chickens but I only had one and that seemed quite enough for the two of us (and I wouldn't have been able to find a Dutch oven big enough for two) so I halved it. I was a little hesitant given there were so few ingredients but trusted in this dish, after all if you're going to serve it to a bunch of chefs, it has to be half good doesn't it? And it was, the chicken was incredibly soft (probably due to the actual chicken) and the flavour was incredible with the slightly tart pomegranate molasses coming through, the pop of the pomegranate seeds and the richness and unusualness of the spice mix with allspice and cayenne pepper. I did tinker with the recipe though and added a few touches. I also kept the chicken whole as I love the sight of a whole bird as it's so feast like in appearance.  I also added some pistachios at the end for a bit of colour and to emphasise the Middle Eastern-ness of the dish.

So tell me Dear Reader, do you like eating cuisine that's different from your own background?

Buyer's tip: Pomegranate molasses can be found at Middle Eastern stores and at some larger gourmet stores. It is very different from plain molasses and cannot be substituted for that without changing the taste significantly. 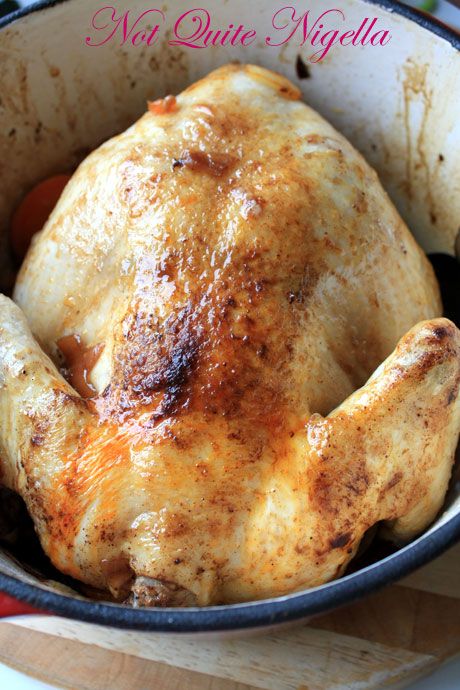 Step 1 - Preheat the oven to 180C/350F. In a Dutch oven, cook the onion and carrots with the olive oil over low heat until the onions are soft, about 10 minutes. Remove and place in a bowl. Turn up the heat, add the chicken and brown on both sides turning carefully with tongs for about 5 minutes. Return the carrots and onion to the Dutch oven and add cayenne pepper an allspice and coat the chicken carefully on top breast side up. Add 2 tablespoons of the pomegranate molasses and half of the brandy.

Step 2 - Place lid on Dutch oven and bake for 1.5 hours (45 minutes if you are using pieces). Add up to 125ml of water if it is drying up (mine didn't dry up at all with the lid on although with foil I'd imagine there might be some drying out). 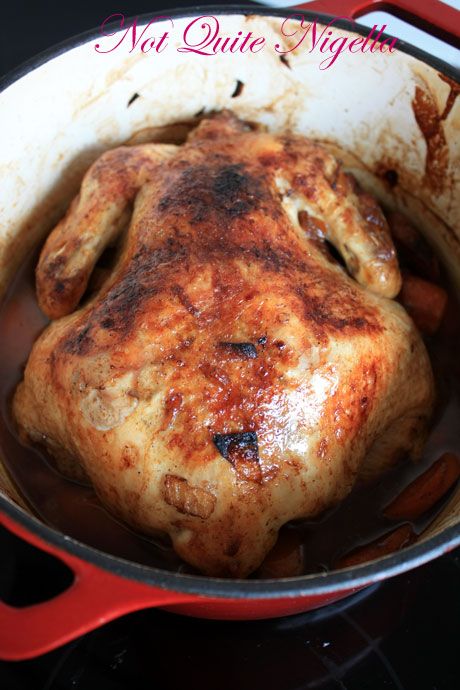 Step 4 - Take the Dutch oven out of the oven and place it on top of the stove on low heat. Add half of the Pomegranate seeds the remaining tablespoon of pomegranate molasses and remaining half of the brandy. Cook for 3 minutes to cook off the alcohol. Top with remaining pomegranate seeds and chopped, toasted pistachios. They suggest serving it with plain rice. I used Pearl or Israeli couscous. 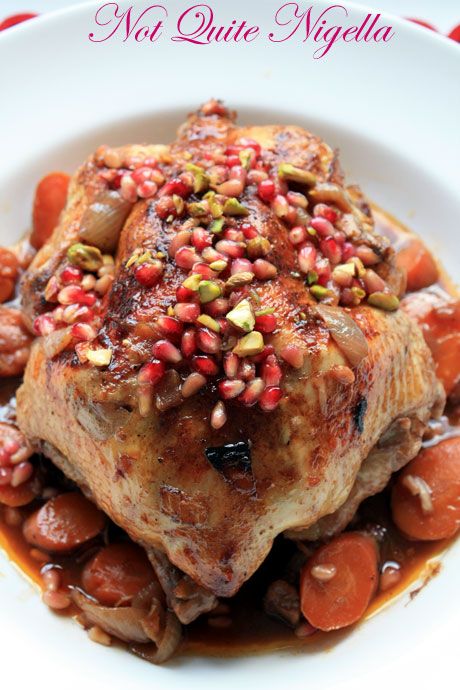