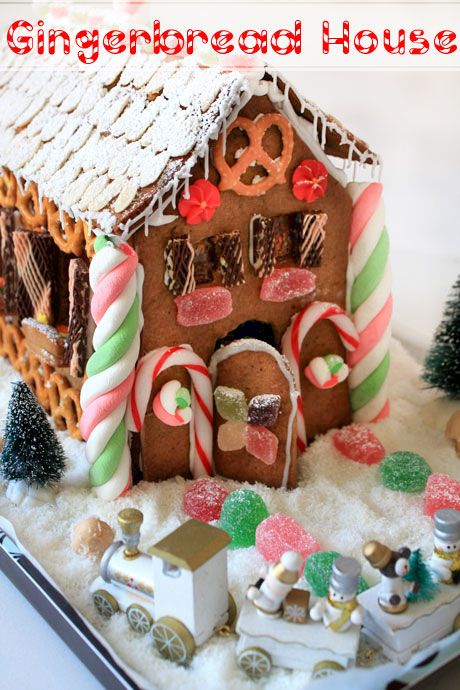 This month's Daring Bakers challenge was an exciting one for a couple of reasons. Two of my favourite bloggers were hosting: Anna from Very Small Anna and Y from Lemonpi and they had chosen something that I had been dying to make for quite a while: a gingerbread house. This year Christmas crept up on me and the excitement I had at making this quickly faded when I glanced at the calendar. You know the movie scene where the pages are ripped from the calendar in fast succession signifying the rapidly passing time? I swear every time I looked at the date I felt like Christmas was running away from me in blocks of days or weeks. 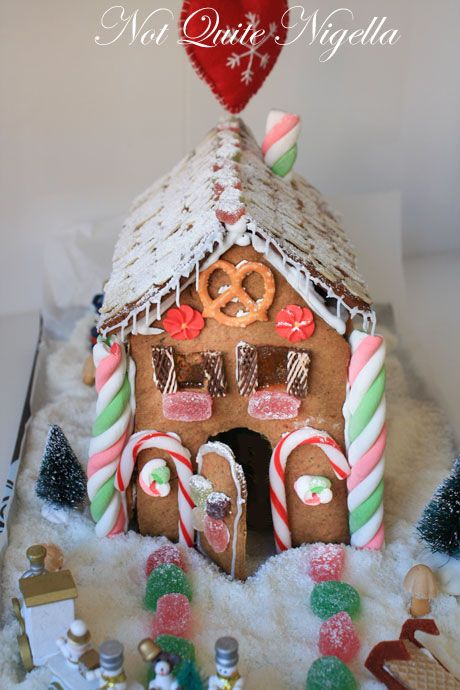 Occasionally Y would email me and ask how the Gingerbread house was going. I'd answer her that it was going well and last week I told her that it was scheduled for the weekend but then the date came and passed. You see I had to battle fellow Christmas shoppers in the Bondi Junction car park (which never has enough spaces at the best of times, let alone Christmas time). I'd come home from Christmas shopping exhausted, hot and irritable. Not a good time to turn on the oven to make gingerbread. 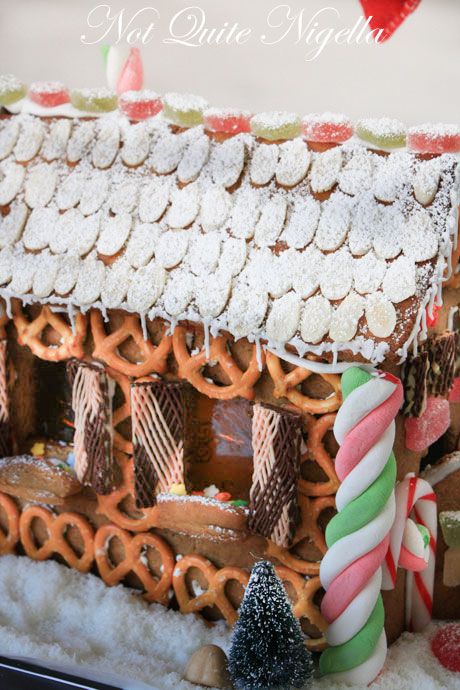 But finally one day I make the dough. I made Y's gingerbread recipe as I didn't have the molasses in Anna's recipe. I was also intrigued by the idea of the Scandinavian gingerbread as Mr NQN is a half Finn (technically Finns are Scandis though but I shan't get pedantic). All I knew is that I wanted to make stained glass windows to emulate a glowing from within effect.  It was a bit hard to work with the rolling pin as witnessed in the different thicknesses of the walls and roofs but it did taste quite delicious (although Mr NQN thought that it wasn't gingery enough and preferred the regular gingerbread). For the glowing window effect I cut out some windows and added some crushed orange lollies in the cavity and baked it. I let it cool and decided to ice it the next day. 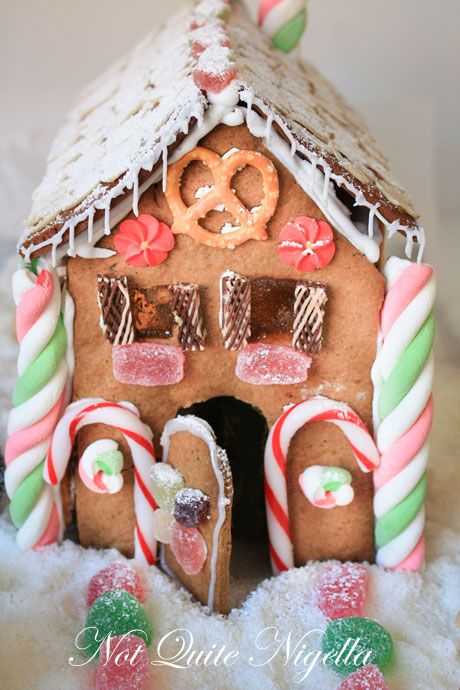 I mixed up a very stiff royal icing mixture and piped away. Then... disaster struck! The roofs were not long enough for the house. I had measured it but when gluing it all together either there had been some shrinkage or a miscalculation. I was always terrible at Maths, could this be that dreaded calculus thing that I always proclaimed useless in real life? Sighing deeply I cleaned the mixer and set about making another half batch of gingerbread. It baked and there was no shrinkage and apart from a slight rise at one end, it fit the house. 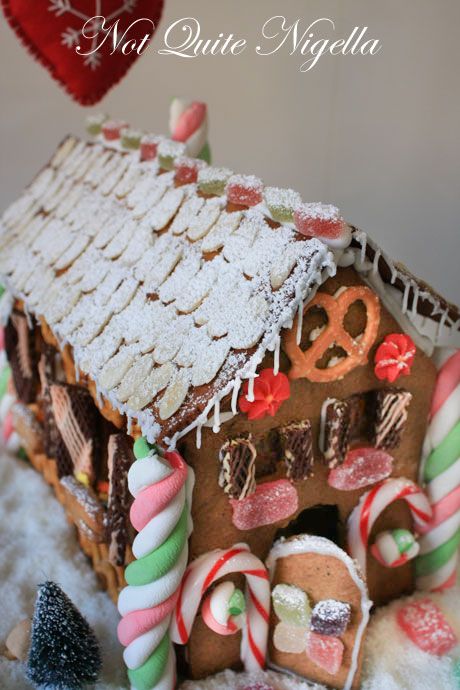 Now came the fun part. I used the stiff royal icing as glue for pretzels, slivered almonds and anything and everything I could stick on it. I glued Christmas cane marshmallow and jelly diamonds and affixed shutter doors and made a flower basket for each stained glass window. I dusted icing sugar on top and I was finally done. It was literally 3 days before Christmas and I had finally finished it. It didn't look quite like what I wanted it to, in fact I thought it looked a too homely and not the chic gingerbread house that I had so desired but I had so much fun decorating it I realised I had even forgotten to take photos of it in progress only taking the one photo! 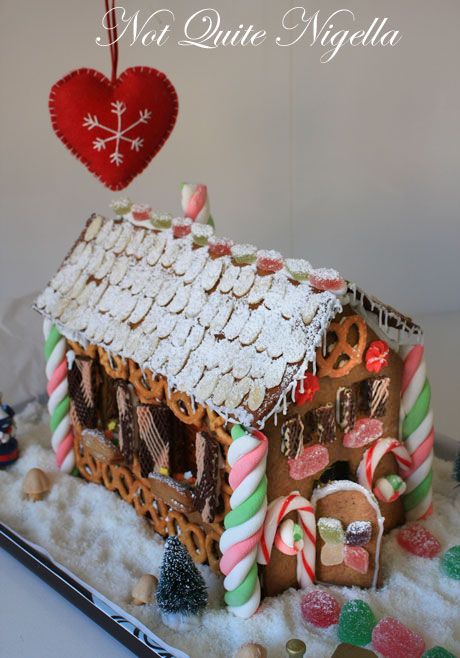 The December 2009 Daring Bakers challenge was brought to you by Anna of Very Small Anna and Y of Lemonpi. They chose to challenge Daring Bakers everywhere to bake and assemble a gingerbread house from scratch. They chose recipes from Good Housekeeping and from The Great Scandinavian Baking Book as the challenge recipes.

So tell me Dear Reader, with Christmas so close, what food is going to feature on your Christmas table? 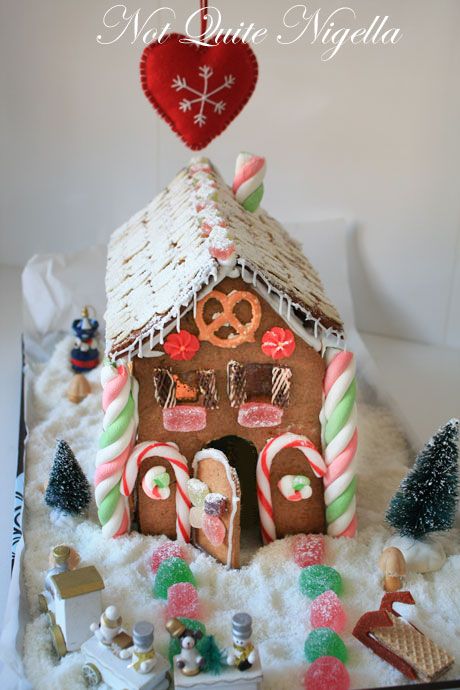 Adapted from The Great Scandinavian Baking Book by Beatrice Ojakangas

Step 1 - In a large bowl, cream the butter and sugar until blended. Add the cinnamon, ginger and cloves. Mix the baking soda with the boiling water and add to the dough along with the flour. Mix to make a stiff dough. If necessary add more water, a tablespoon at a time. Chill 2 hours or overnight.

Step 3 - Roll the dough out on a large, ungreased baking sheet and place the patterns on the dough. Mark off the various pieces with a knife, but leave the pieces in place. Cut out squares for the windows and fill these spaces with the crushed orange lollies. These will melt into the shape of the cavity. Also cut out small window ledges although these will only need a few minutes to bake.

Step 4 - [I rolled out the dough on a floured bench, roughly 1/8 inch thick (which allows for fact that the dough puffs a little when baked), cut required shapes and transferred these to the baking sheet. Any scraps I saved and rerolled at the end.]

Step 5 - Preheat the oven to 375'F (190'C). Bake for 12 to 15 minutes until the cookie dough feels firm. After baking, again place the pattern on top of the gingerbread and trim the shapes, cutting the edges with a straight-edged knife. Leave to cool on the baking sheet.

Beat egg white until frothy, adding the powdered sugar gradually to get the desired consistency. Pipe on pieces and allow to dry before assembling. If you aren't using it all at once you can keep it in a small bowl, loosely covered with a damp towel for a few hours until ready to use. You may have to beat it slightly to get it an even consistency if the top sets up a bit. Piped on the house, this will set up hard over time. 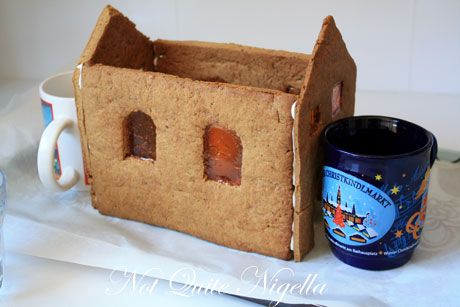 Step 1 - Sit gingerbread house upright on a large parchment lined tray and pipe along the joins of the walls and attach. Using straight edged cups or jars against each each wall or side to support, wait until royal icing has set (mine took an hour to set).

Step 3 - Sprinkle dessicated coconut onto the parchment for snow and then go a bit crazy with the decorations! 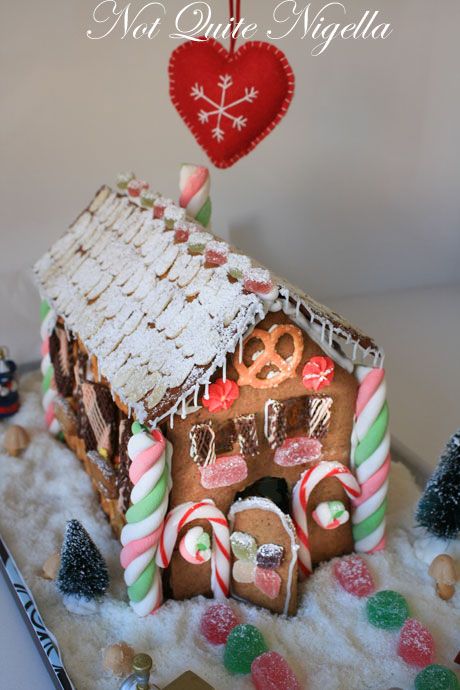