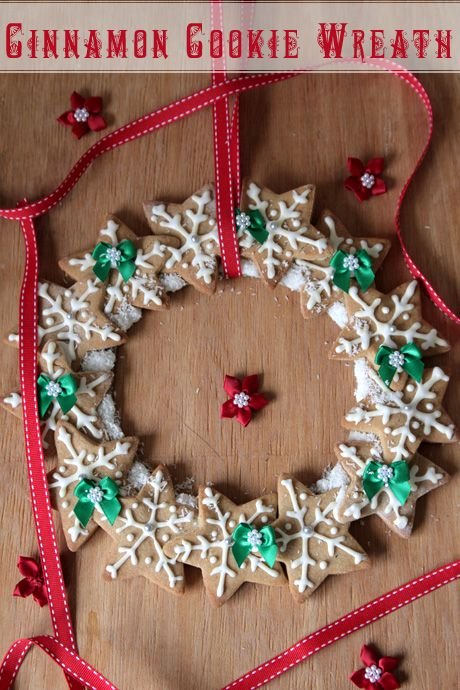 As you read this, I will no doubt be frantically preparing for Christmas. It will be an onslaught, self induced, of the familial kind. Mr NQN's eccentric family will come crashing into my own eccentric-but-in-a-different-way family in our annual Christmas celebration. Somewhat foolishly, we had volunteered to have the dinner at our place as I am attempting my first roast goose for the meat eaters and I didn't want to schlepp it across town to another place.

"Yes but everyone wasn't sitting down at a table" he pointed out, quite rightly. I hate it when he's right. 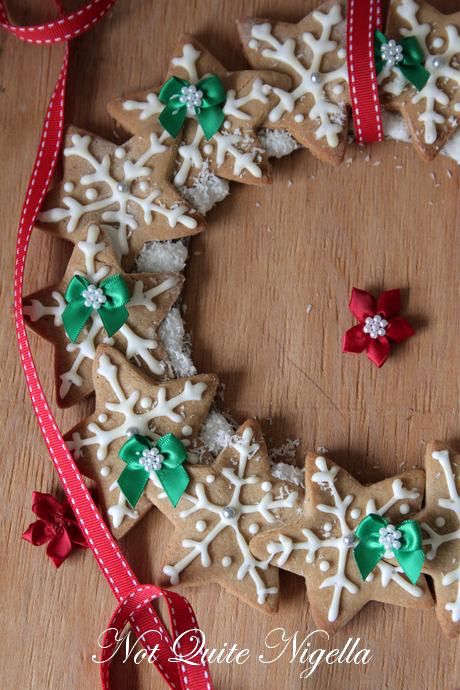 I don't quite know how we'll fit fifteen people around our table that seats eight comfortably. We tossed around the idea to have a separate, smaller table, not for children but for parents. We pictured using smaller chairs and cutlery and telling them to "Keep the noise level down so that everyone can enjoy dinner!". Ahh that remains a fantasy...Perhaps it wasn't such a great idea after all and I am hoping that it will go off with a minimum of fuss and without us feeling like a horde of people had breached our perimeter.

I started off slow making Christmas goodies this year but my love for Christmas has well and truly taken over and I can't seem to stop making things. I originally wanted to make this with a brioche bread or similar but gingerbread or cinnabread cookies seem to keep a bit better and putting this up too many days in advance would have meant that a bread would have gotten stale and inedible so I decided on cookies. I will warn you that it is a delicate wreath. I don't know if I would use it on a door that gets opened or shut a lot (definitely not a door that gets slammed in a Christmas tantrum over a badly thought out gift!). I have added reinforcements on the back with a circle of cardboard-it would fall apart in Sydney's humidity otherwise. This wreath will greet our guests on the front door and if someone should choose to take a bite out of it, so be it.

So tell me Dear Reader, what food do you look forward to eating every Christmas? 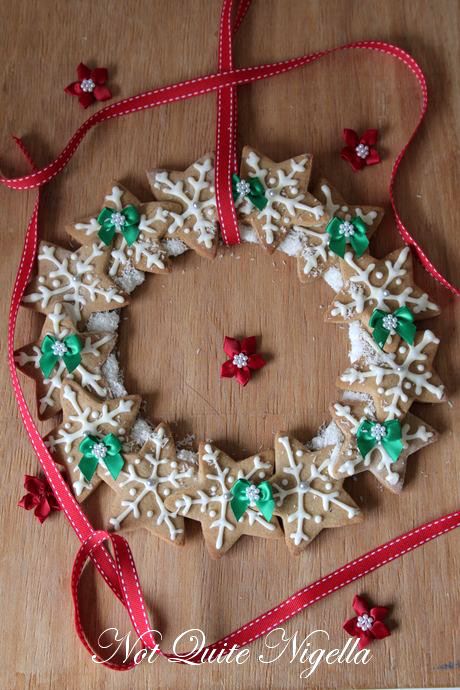 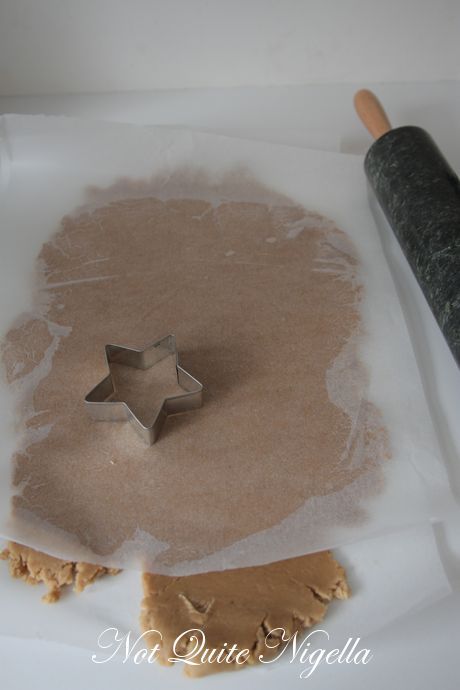 Step 1 - Line a baking tray with baking paper. Draw an 18cm circle on the baking parchment. Use an electric beater to beat the butter and sugar in a bowl until pale and creamy. Add the golden syrup and egg yolk and beat until combined. Stir in the flour, cinnamon, mixed spice and bicarbonate of soda. Turn onto a lightly floured surface and knead until smooth. Press dough into a disc. Cover with plastic wrap and place in the fridge for 30 minutes to rest. 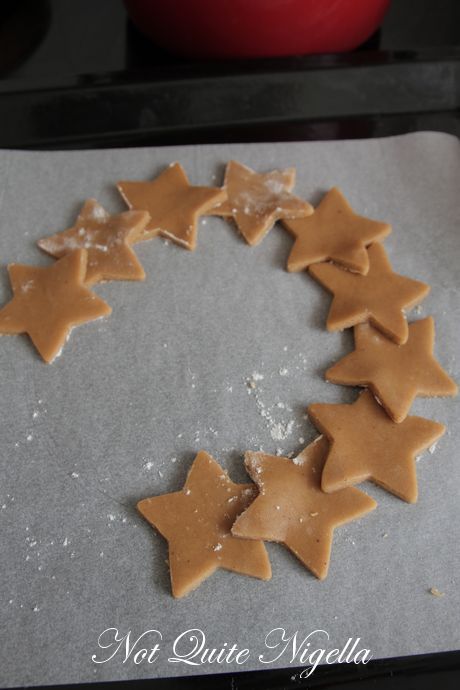 Step 2 - Preheat oven to 180°C. Place the dough between 2 sheets of baking paper and roll out until about 4mm thick. Use flour dipped cutters to to cut out shapes (dip in a bowl of flour between each cut). Place stars around the circle joining them up by pressing down gently. Repeat and reroll any excess dough. 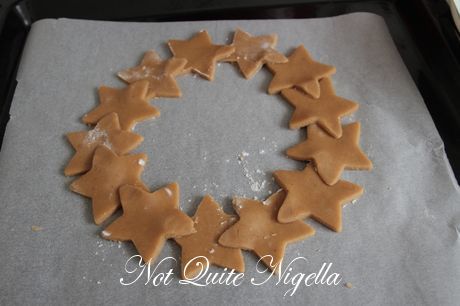 Step 4 - Bake in oven for 10-12 minutes or until brown-you don't want these too soft. Remove from oven. Transfer to a rack to cool. They may fall apart slightly at the join but that's ok, we have royal icing to glue them back together.

Step 5 - Make the royal icing by sifting icing sugar into a bowl and stirring in the egg white and lemon juice until you get an icing that holds a line. I sometimes have to add more icing sugar or a few drops of water to get the right consistency and I draw a line in the bowl with the icing and if it stays after 30 minutes or so, then it is ready to pipe patterns. 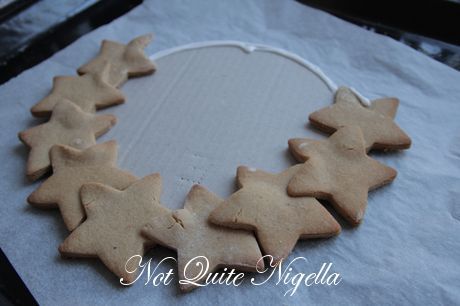 Step 6 - Cut out a circle in cardboard to fit the circle of cookies and cut out the centre. Place the icing in a rolled up cone of baking paper or in a piping bag. "Glue" the stars together and onto the cardboard. Then pipe patterns onto the stars so that they resemble snowflakes (or whatever patterns you would like). Add a silver cachou in the centre and affix any decorations you have with royal icing. Then pipe royal icing on top of the cardboard that shows and then sprinkle desiccated coconut on top of this to resemble snow. Allow to set overnight and hang up with a ribbon securing the cardboard to the door with blu tack or sticky tape. 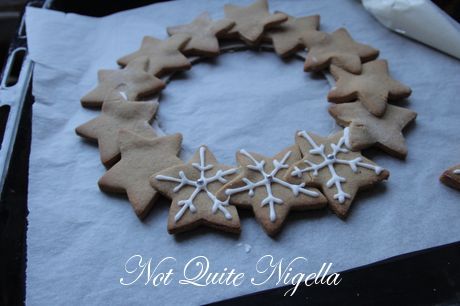 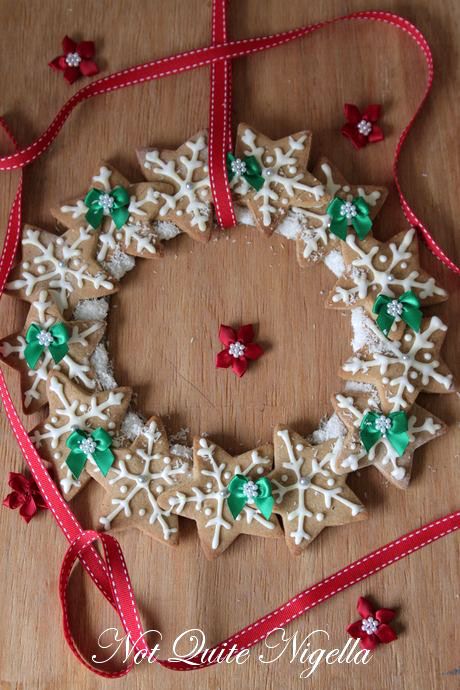