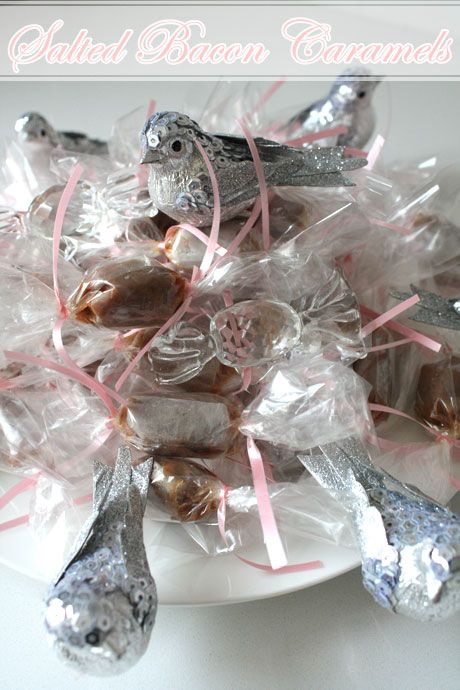 By now you've perhaps all heard of my friend Kathy. She's the one that when she tells me that she's found a cool idea for NQN I listen. She's Australian but lives in the US now with her American husband and somehow, she always finds the coolest things to make. She knows and shares my prediliction for bacon, that wonderful salty smoked meat and when she saw my bacon jam she found me the most fabulous counterpart for it-Salted Bacon Caramels! 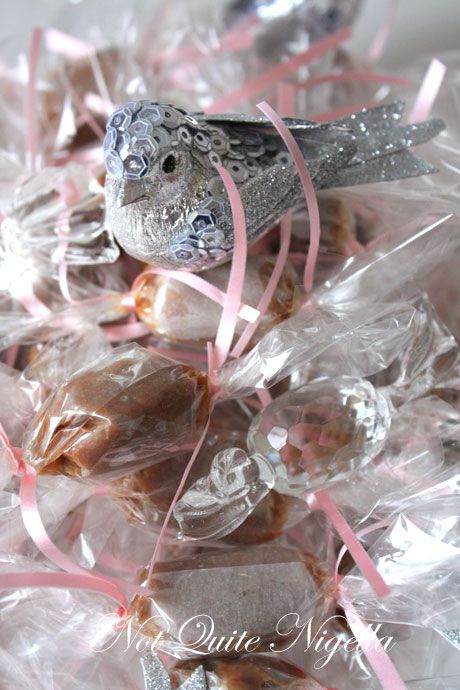 As usual I decided to fiddle with this recipe a little and instead of corn syrup which I'm told is evil stuff and is hard to obtain here, I used pure maple syrup and honey. I accidentally set the heat on a fraction too high and it spat at me when I stirred it but like an addict I kept stirring for a while before getting the ice pack out so be careful. I wouldn't set it higher than the halfway point (or 6/10 maximum) on your stovetop. 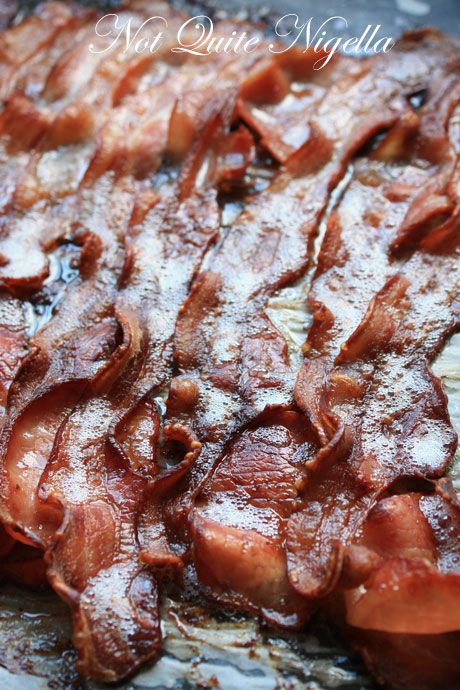 It took a while to set and since it was so hot I gave it a little help by putting it in the fridge (and I don't think it hurts putting it in the fridge with all of that bacon in it). I don't think getting food poisoning is a particularly good idea and it's so unglamorous! I oiled the knife and cut it into 64 pieces and popped a corner piece in my mouth. Oh it was good, so damn good I had thought I had a semi religious blathering moment and wondered why so many thousands of years after this so- called civilisation had it taken so long to combine bacon and caramel into one super candy. In truth I preferred the pieces that were more lightly salted over the heavily salted pieces but that's because I do happen to love bacon and maple syrup with pancakes as I find the saltiness from the bacon gives it enough saltiness. 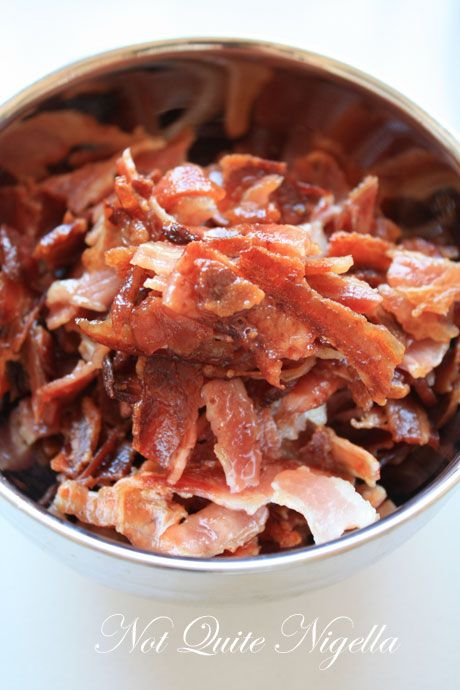 It was time consuming wrapping the little buggers up though and this is where an assembly line of elves would certainly aid in this endeavour. In fact the wrapping took up more time than making the caramels. But my reward of course was seeing the expressions on Mr NQN's and my friend's faces when they popped a little bacon caramel in their mouths. You know the look: contented murmuring at the smooth sweetness of honey and maple, a surprise when they discovered the salty bacon pieces and then a nodding in agreement when they realised that the bacon was not a rogue salty interloper but a long lost friend. 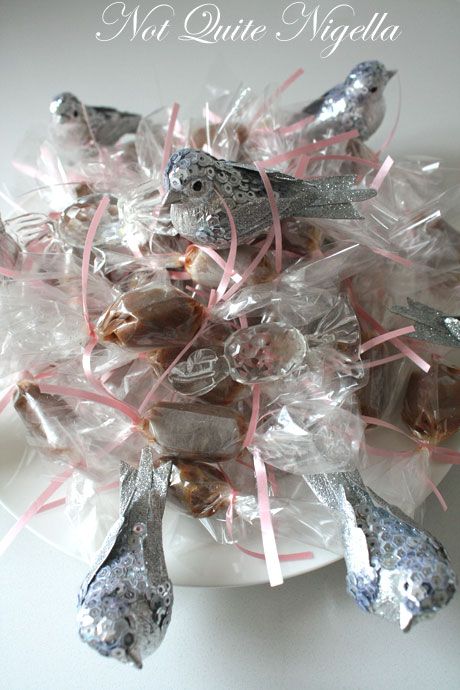 So tell me Dear Reader, what is the oddest flavour combination you have heard of, made or tried?

Step 1 - Preheat the oven to 200C/400F and line a baking tray with bacon rashers. I cooked extra as pictured. Bake for 20 minutes until crisp. Remove from oven and cool and then crumble into tiny pieces and set aside. 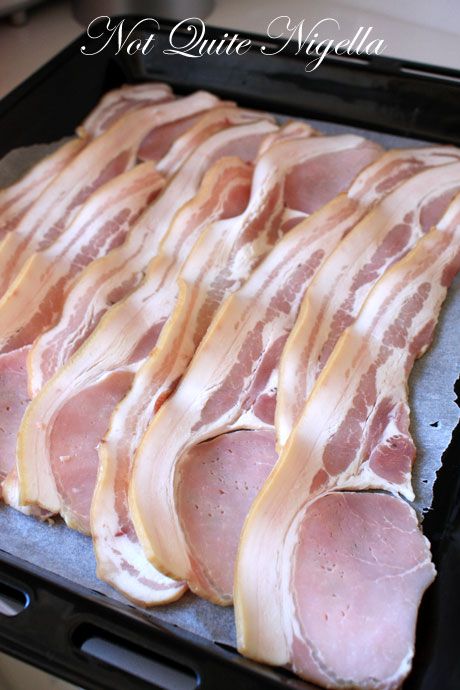 Step 2 - Line a square baking tin with foil and oil it well. In a large, deep, heavy non-reactive saucepan, heat the condensed milk, brown sugar, maple syrup, honey, butter and cream over medium heat stirring often until the mixture reaches 245F degrees on the candy thermometer you have clamped to the inside of your pot. Do not turn too high or it will spit at you (believe me, I am nursing an ice pack as I have first hand knowledge of this). When it has reached temp, remove it from heat and let it rest until it stops bubbling.  Stir in the crumbled bacon.  Pour it into the baking dish. 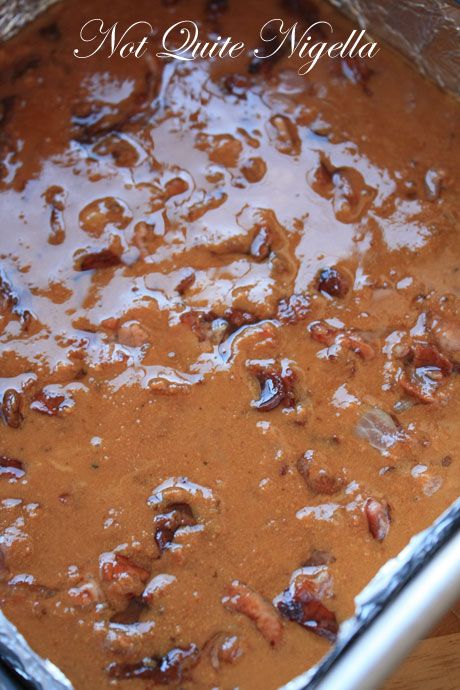 Step 3 - After five minutes, sprinkle the surface liberally with smoked sea salt. It takes a few hours to cool and set.  When it has cooled completely, cut it into 64 squares and wrap in waxed paper and cellophane. 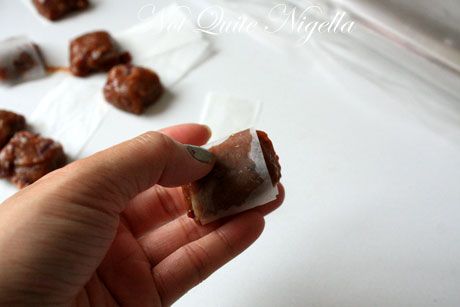 I wrapped these first in wax paper and then cellophane (below) 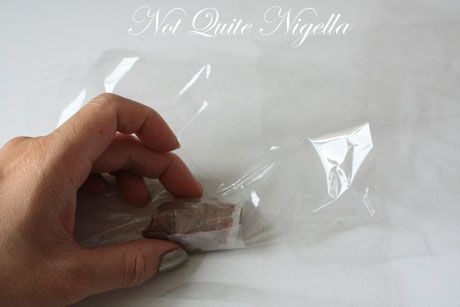 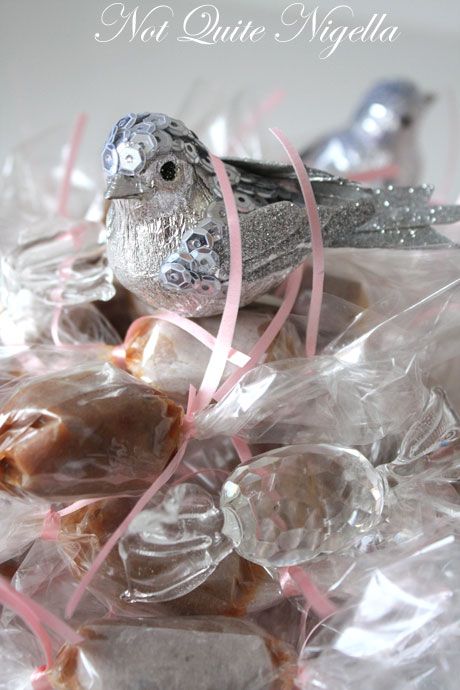