Brussels Sprouts with Bacon and Cider 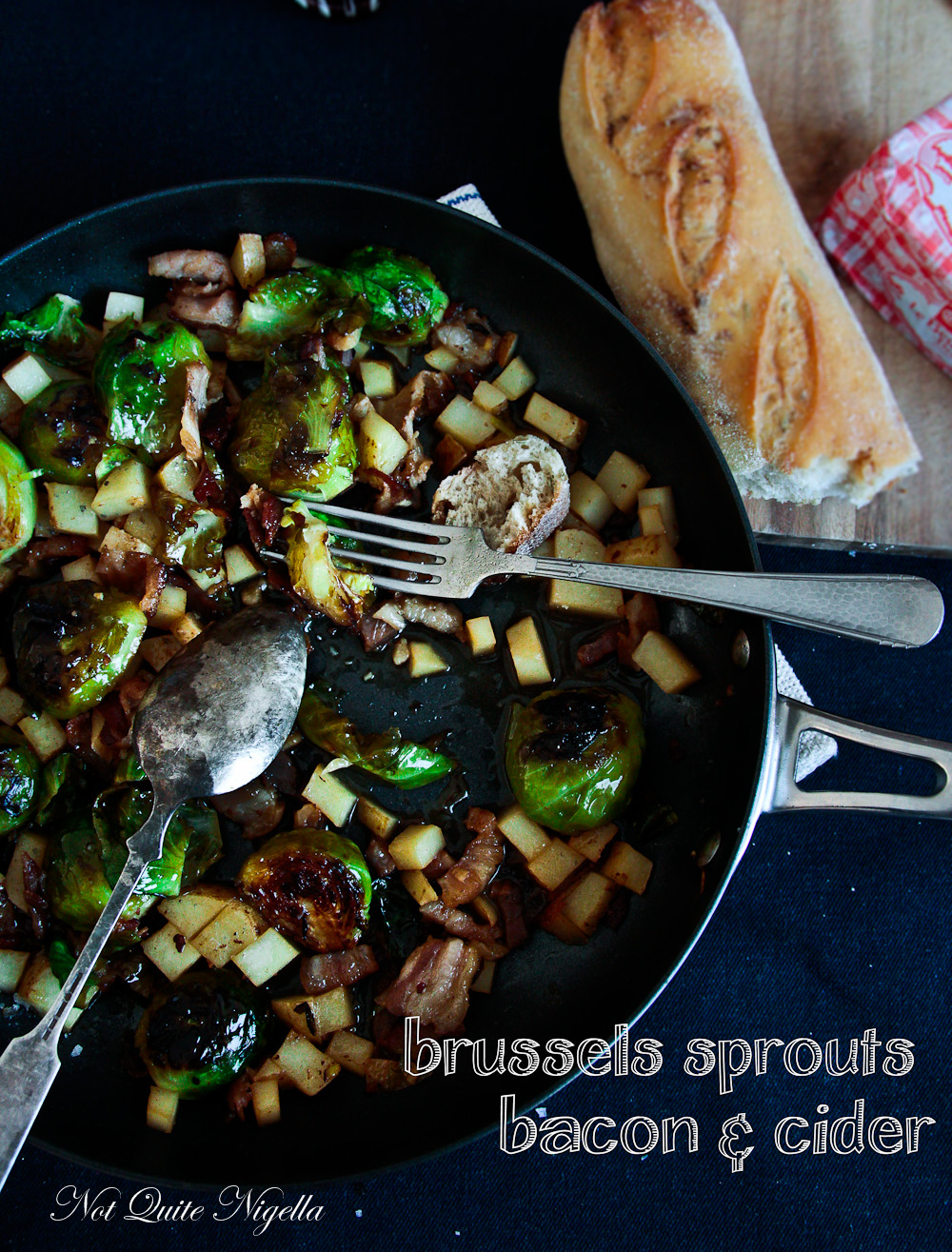 Dear Reader, where do you get your inspiration for recipes? For me sometimes it's from something I've eaten when out or more often than not, it's from an ingredient that I pick up at the markets. And this past month has been a whirlwind of travel. I have a few goodies to show you from my travels to Bali and the South Coast of NSW as part of Celia's In My Kitchen series. 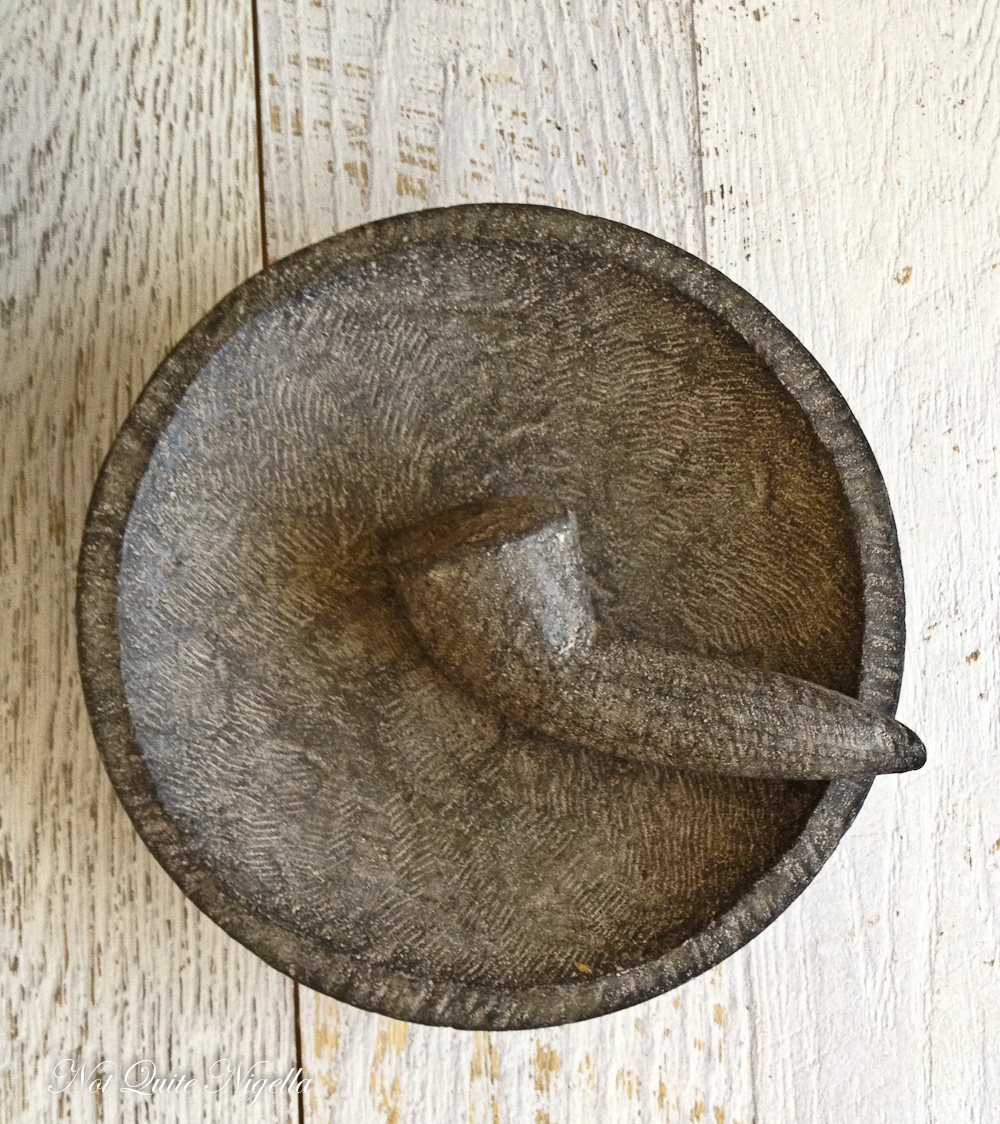 I actually bought so many items back from Bali that my luggage was overweight. Most of it had to do with this mortar and pestle that I purchased after using one in a cooking class. It had such a great ergonomic feel to it. After the class we stopped off at a local market where they were selling them for about $9AUD. I would have bought more as gifts but needless to say, it was very heavy! 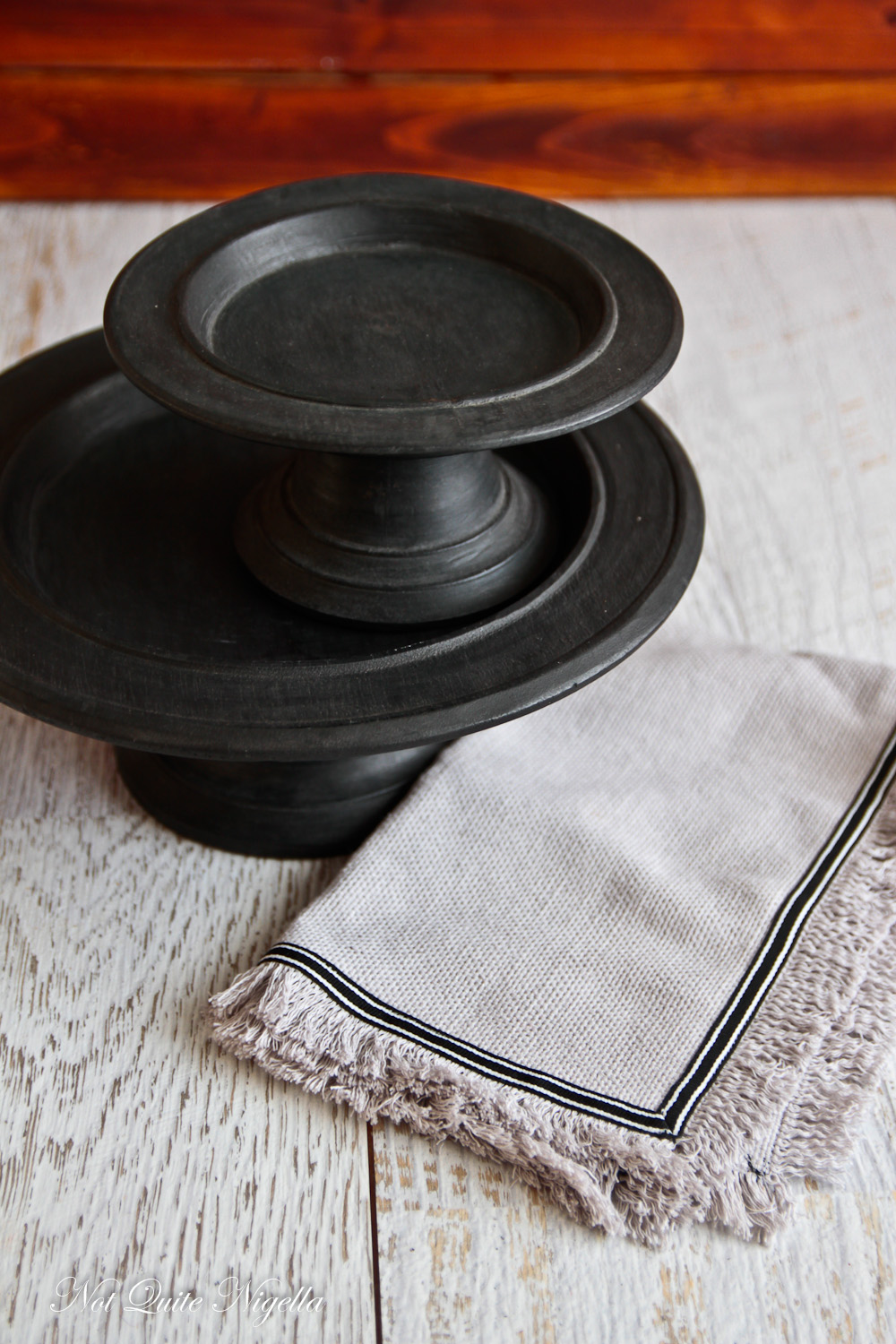 My second items are also from Bali and these are offering bowls. They're lightweight wooden stands painted black. A lot of people have asked if you can take wooden items back into Australia and as far as I can tell, you can as long as there are no signs of infestation or holes that could have insects in them. I also bought a fringed napkin from a chic boutique - it was actually more expensive that the wooden stands otherwise I would have bought more. 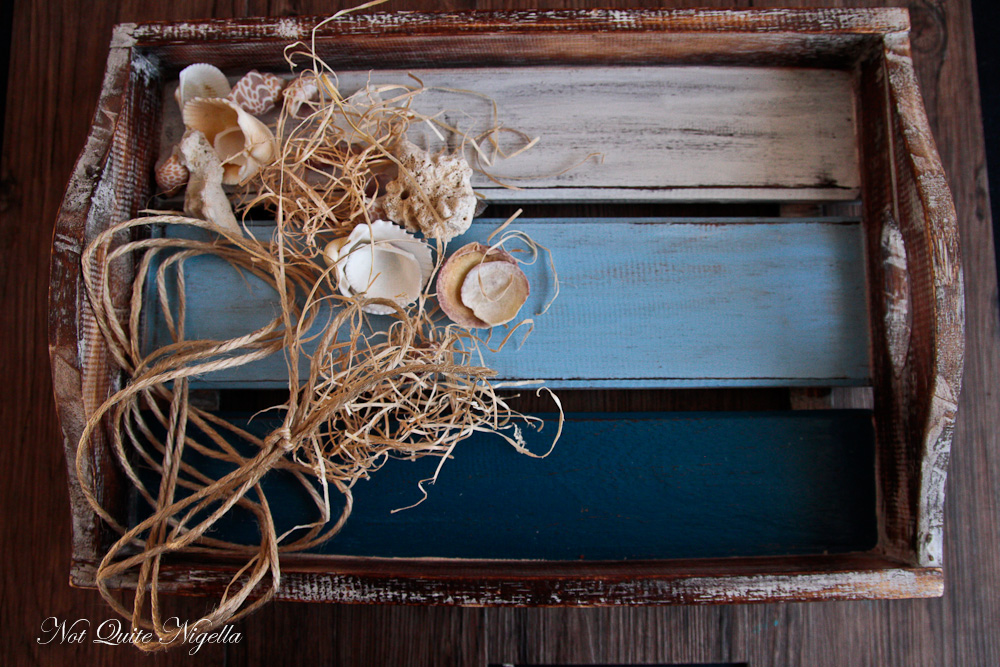 My next item is also from Bali. I loved how worn this tray was and I'm always on the lookout for props so no doubt this will appear in an upcoming recipe post! 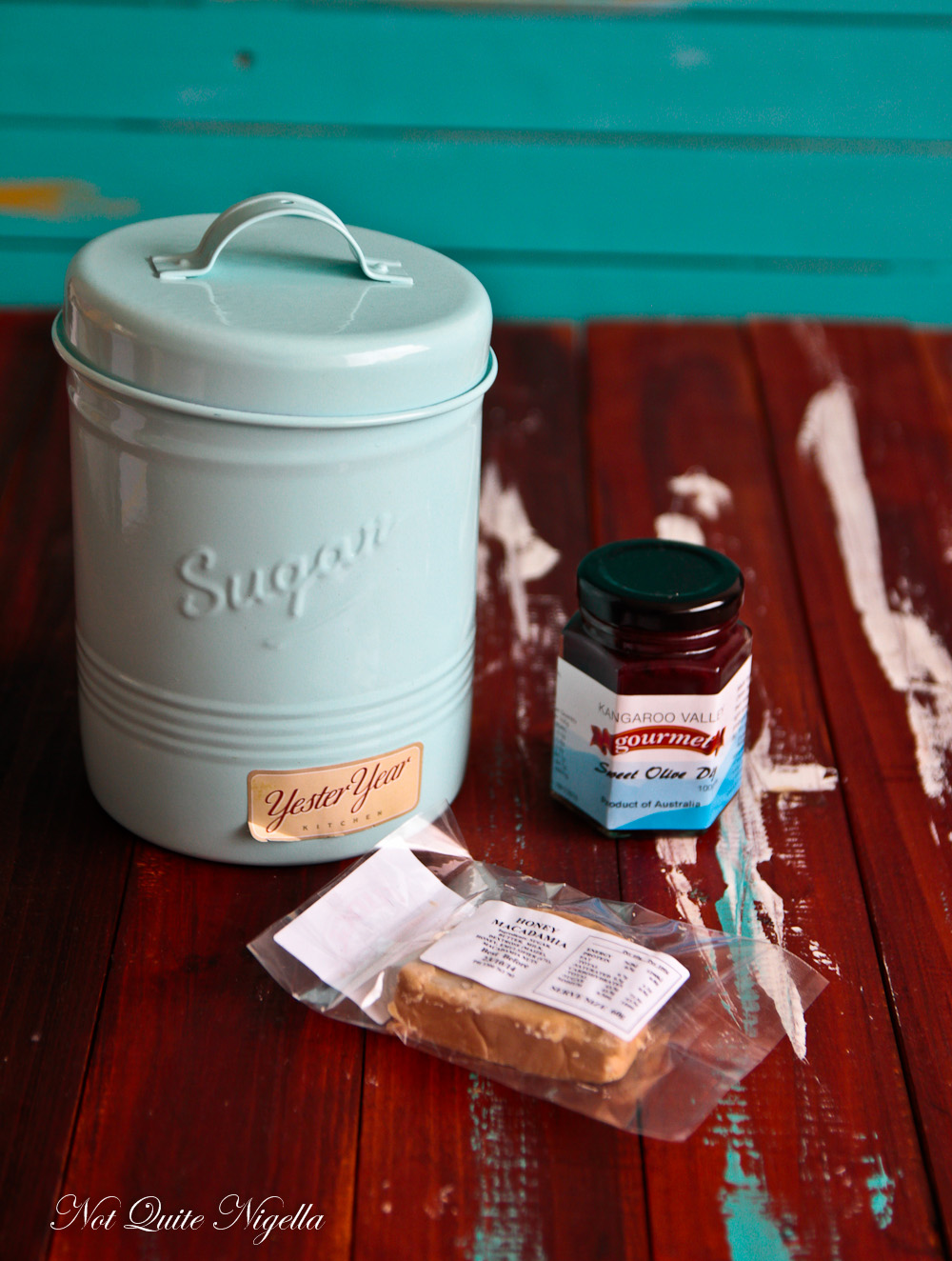 My next lot are things from a bit closer to home. We recently went to the South Coast of NSW to Kiama for Mr NQN's birthday and I bought another tin - not for biscuits or sugar but to house some cooking utensils in. Currently I have four canisters of cooking utensils and they just seem to multiply. Does anyone really need eight spatulas? The answer is yes! Each is different I promise! :P Apart from this is a honey macadamia fudge and a sweet olive paste that was so intriguing that I had to buy it - it's definitely sweet like a jam but has an olive taste. 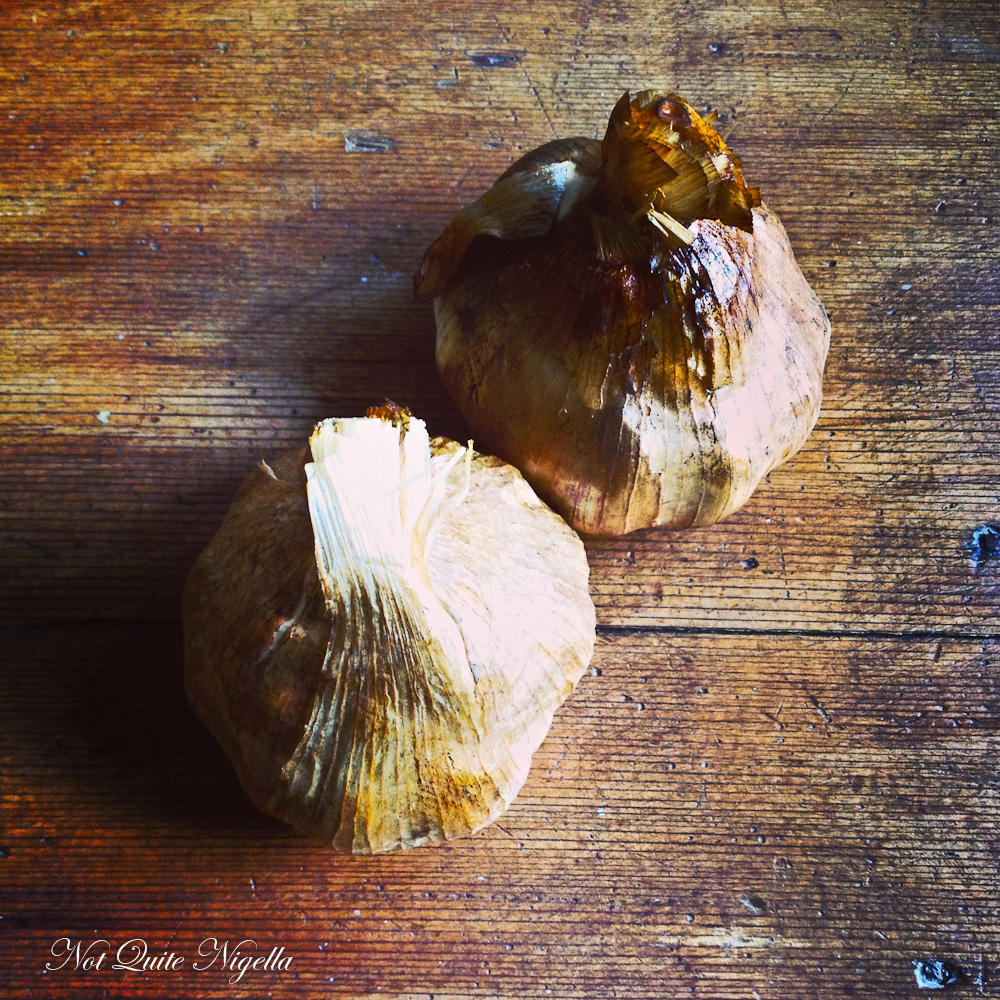 My last purchase was one that really got my excited. I realise that I get excited about odd things and smoked garlic is no exception. I loved smoked goods and I've never thought to smoke my own garlic before. I knew that I was going to go into a recipe with Brussels sprouts. I even bought some chestnuts to put into the recipe and guess what? I'm so clever that I completely forgot about the chestnuts! 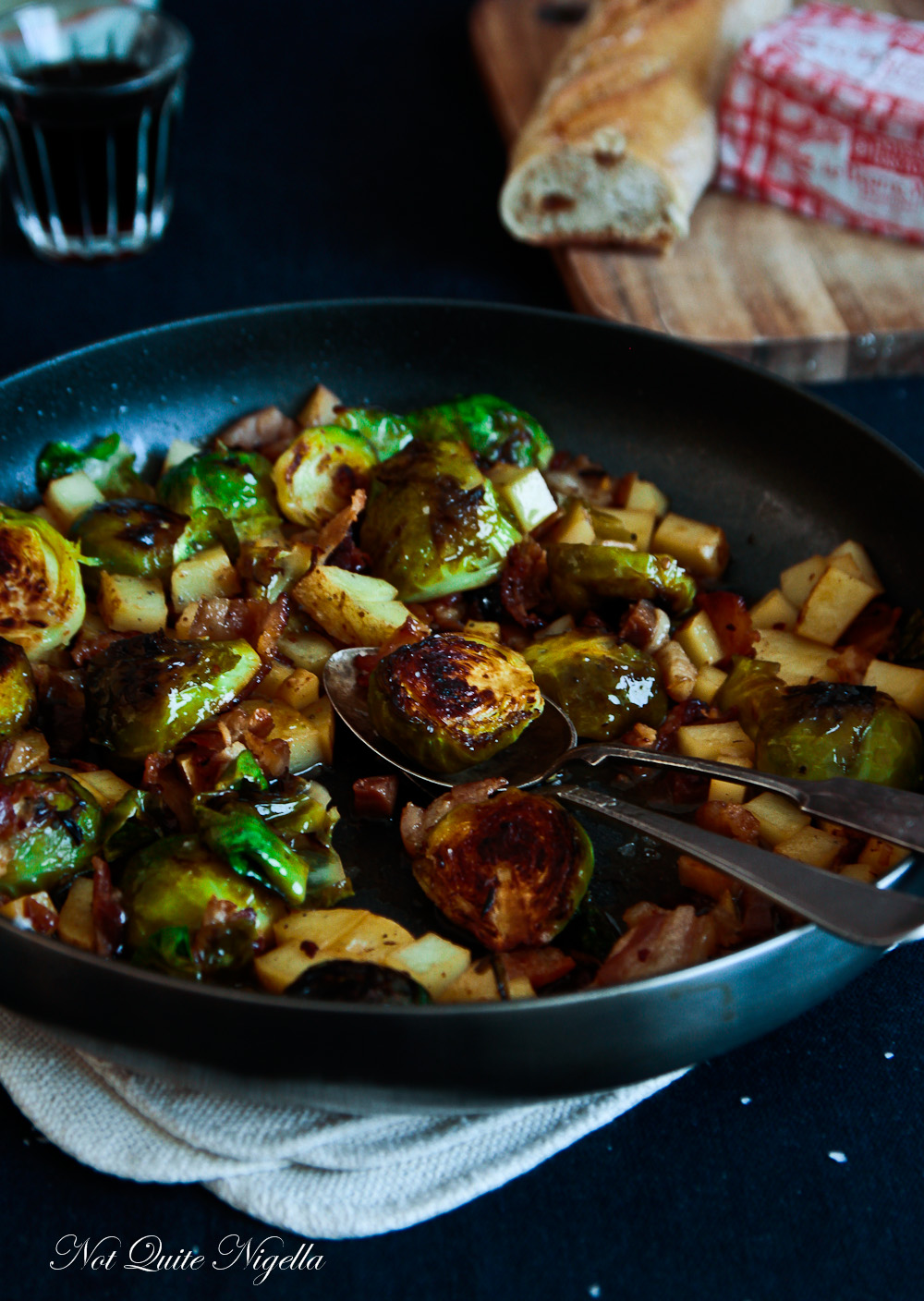 Nevertheless this ended up being a great, quick dinner that was full of flavour. Sometimes you want something delicious and nutritious that isn't going to take anything more than 30 minutes to put on the table. The Brussels sprouts and potato are flavoured with bacon (I used the last of my home made bacon) and given a light smokiness from the garlic. The whole thing is brought together with a gorgeous apple cider sauce which is really just the combination of bacon and cider cooked down so that it turns syrupy and saucey. I paired it with a fig and fennel baguette and it was an easy satisfying dinner.

So tell me Dear Reader, do you have any recipe suggestions for the sweet olive paste? How long does it usually take to make dinner on a weeknight?

Brussels Sprouts with Bacon and Cider

Serves 2 for dinner with bread

Step 1 - Fry the bacon in a large frypan on medium to high heat until starting to get crispy. Push the bacon to the outer edges of the pan. Add some oil to the pan and place Brussels sprouts cut side down and add potato cubes around the Brussels sprouts. You want the sprouts to caramelise and it takes a few minutes-just lift up the sprouts to check. 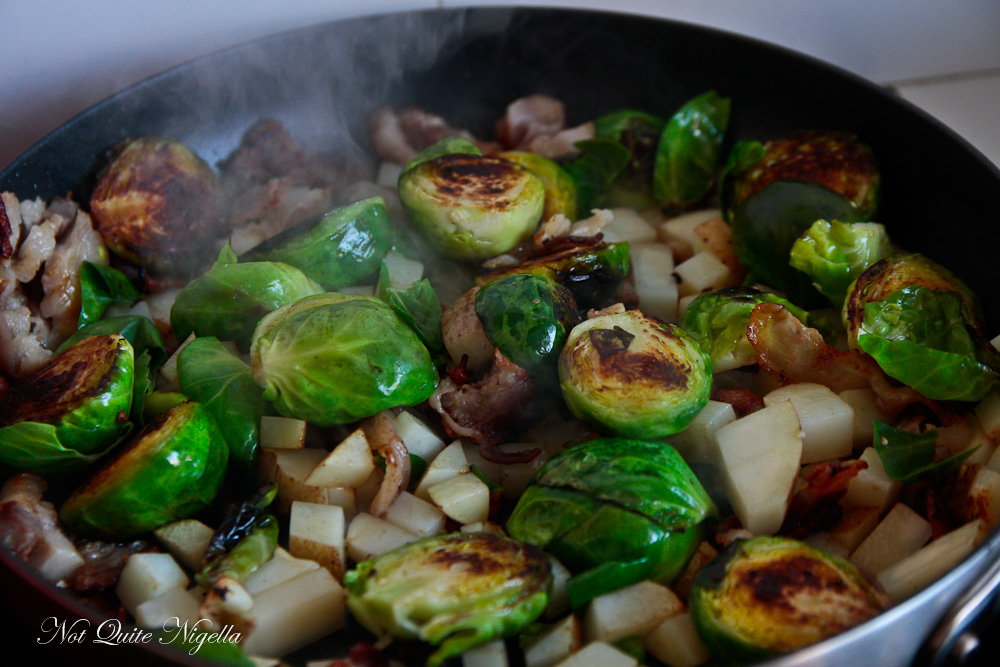 Step 2 - Once the sprouts have been caramelised add the garlic to the pan and you can start to move the vegetables around the pan with the bacon. Cook for a minute or two. Then add the apple cider and cook it down until the potatoes are cooked and the cider reduces and becomes a sauce. Add a little sugar (how much depends on how sweet your apple cider is), salt and pepper. Serve with bread.