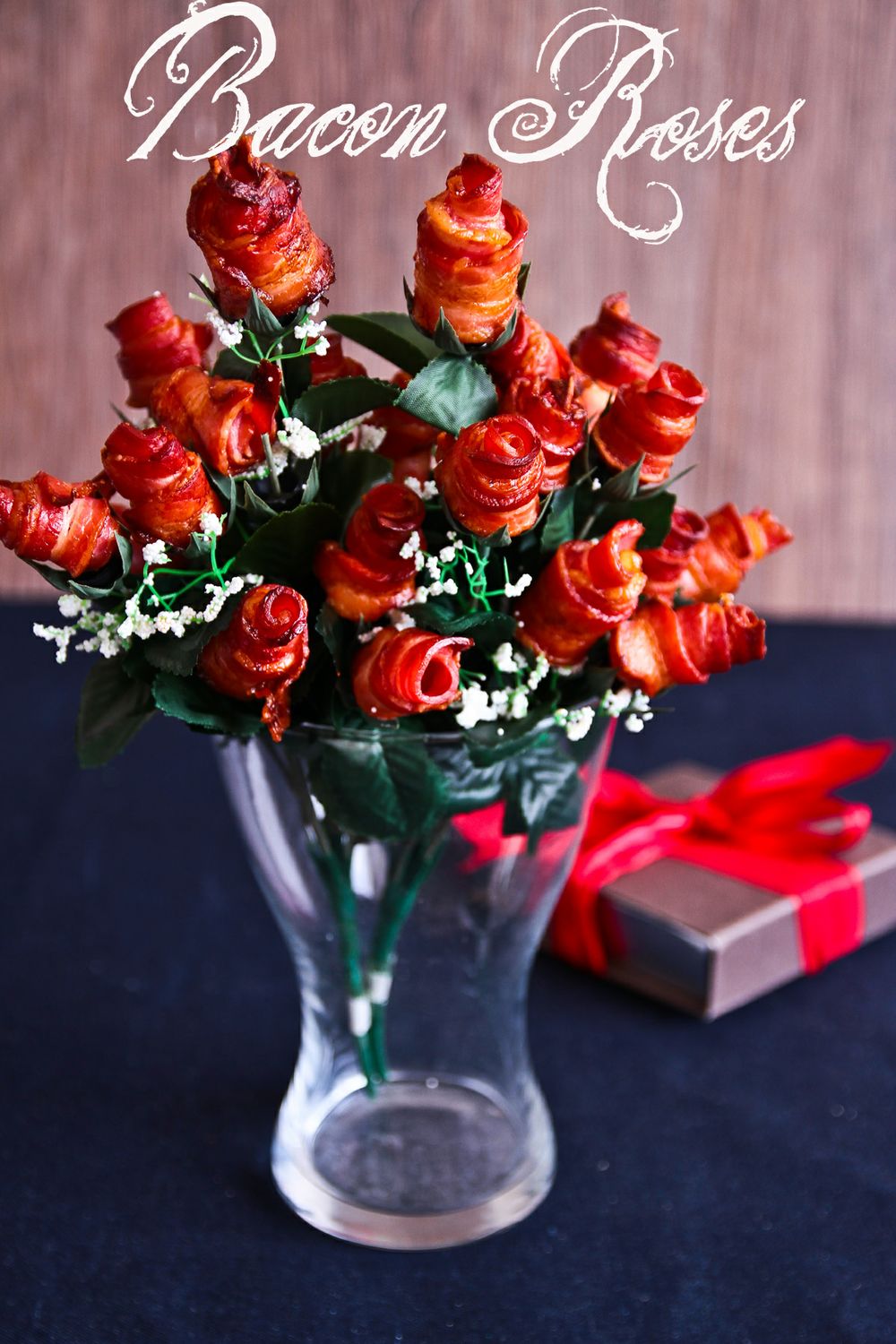 I have a few shopping centres that I frequent for grocery shopping and errands. It depends on what I need to do (visit the post office, chemist etc) and what I need to buy (fresh fish, vegetables or groceries). One of them is the conveniently located and rather unique Surry Hills Shopping Village. It has a bit of everything there (and no this isn't a plug for them, read on ;)) and it is closeby to where we live.

It's also near the lovely lass that I go to for my eyebrows. She was telling me that she finds it an odd place at best and a while back when she was walking through the centre after grocery shopping with her sister, a man came up to them both and excitedly exclaimed.

"Oh my oh! You girls are so beautiful!! I just c**d my pants! Beyooootiful!!". Their only response was to look at each other and laugh as he ran away to (presumably) attend to his pants. 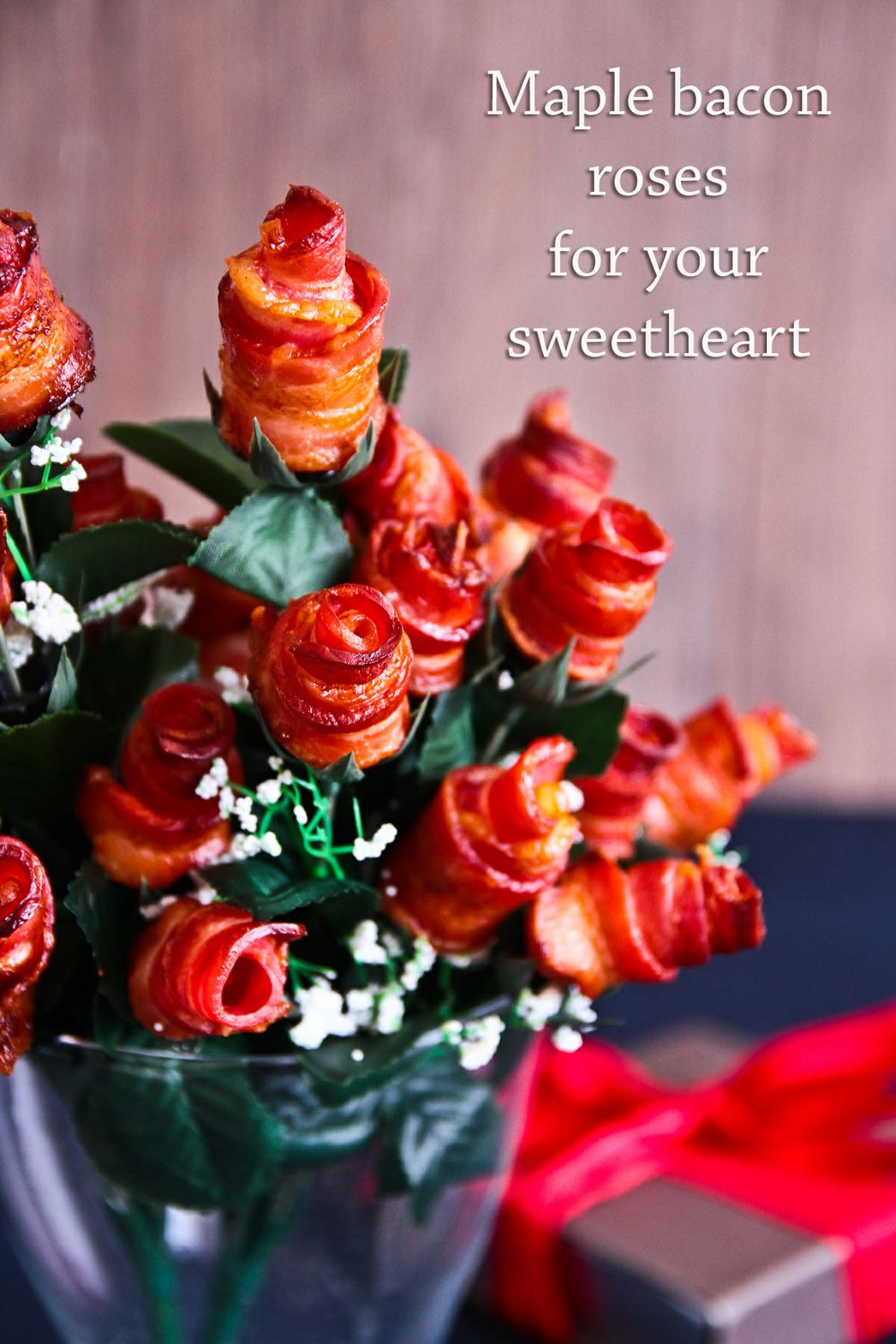 Ever since she told me about that story, I was on the lookout for this man when I visit there. And I was there only last week as I needed to buy the fixings for bacon roses as I need a variety store and a store that sold bacon. Yep that's right, bacon roses. If your other half is allergic to real roses or just loves bacon as much as many in the world do, then this is the perfect way to say I love you on Valentines Day. Say it with bacon.

A picture of the bacon roses was originally sent to me by Queen Viv and I found the recipe on the Instructables. Not only were they delicious but they were also easy to make. There was one stumbling block and that was their suggestion of using a drill to make holes in mini muffin trays. I only had a tray on loan from my mother so I didn't think she'd appreciate me giving her back one with holes in the bottom. Also, me and a drill? That was not going to end well.... 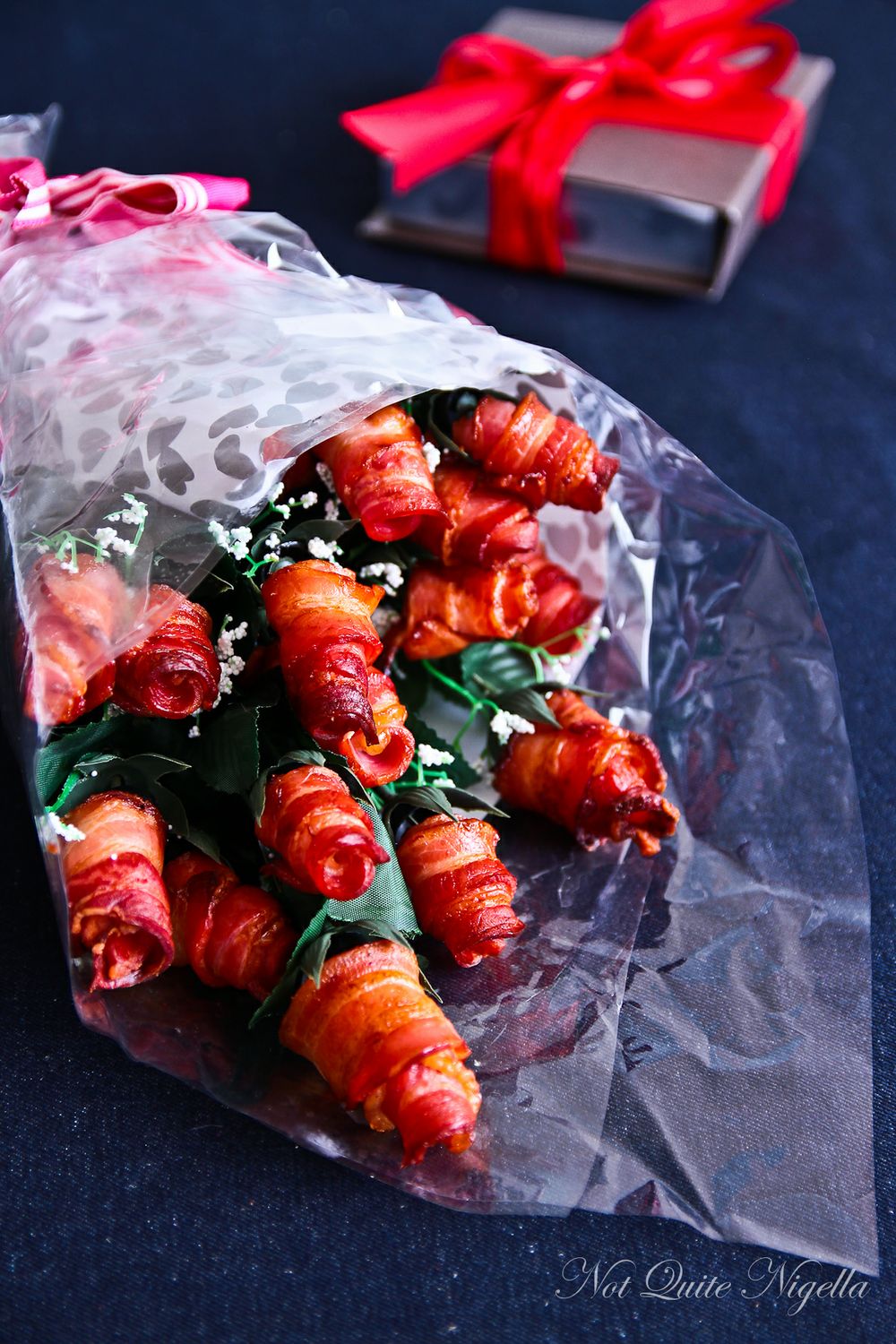 From reading the helpful comments on their site, it seemed like they needed to drain of the fat to cook and brown properly and they needed the cup to help maintain the round shape so I experimented a little. I tried wrapping them in foil and baking paper as well as securing them with pins. I found the pins worked perfectly and were the easiest and baking them on a cake cooling tray allowed them to drain properly. In fact, doing it this way only took about 45 minutes from beginning to end and kitsch or not, these were delicious!

And don't forget, everything is better with bacon!

So tell me Dear Reader, will you be giving chocolates this year for Valentines Day? Or do you think that it's a load of rubbish? 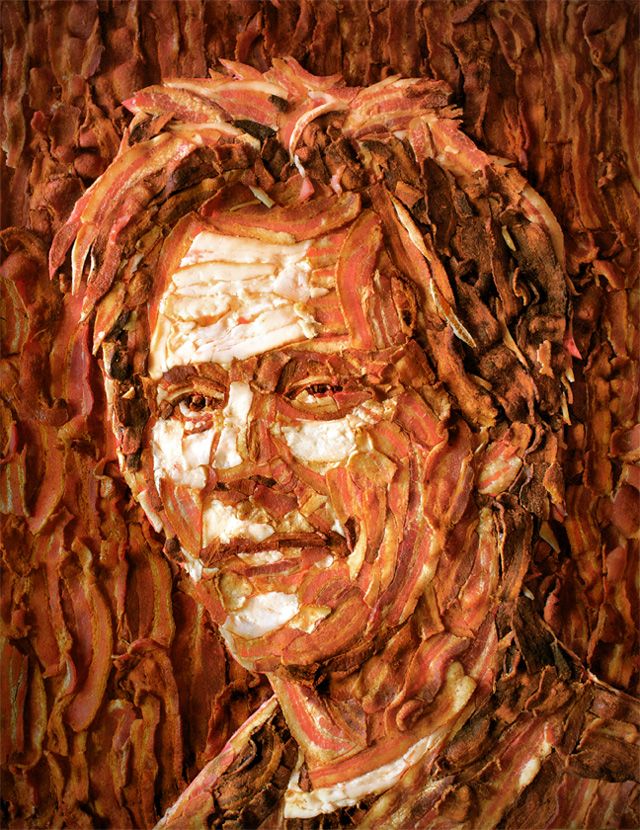 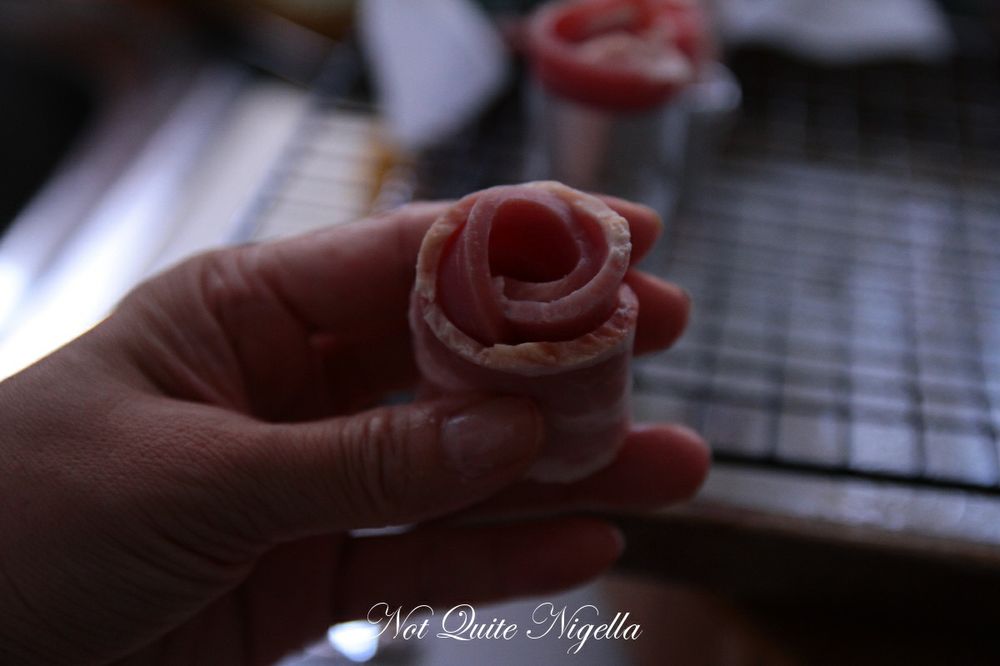 Step 2 - Take each rasher of bacon and roll it up from the larger end to the smallest. Close shut with a pin and place on the cake cooling tray. Don't worry if it doesn't sit upright, I found that they were easier to get off the cooling tray when they weren't sitting upright and had fallen on their side. 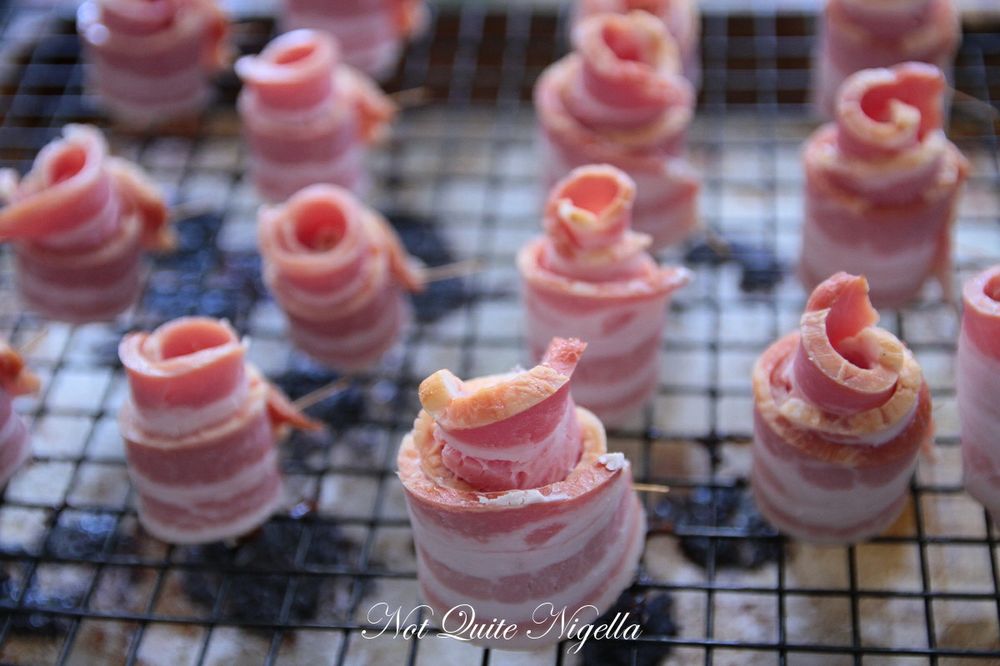 Step 3 - Bake in the oven for 30-40 minutes. With ten minutes to go, remove them from the oven and brush each rose with maple syrup and return to the oven for the final ten minutes. Remove from oven and cool and try not to eat one while getting this ready (although really, who is going to count that they have received exactly two dozen roses?). 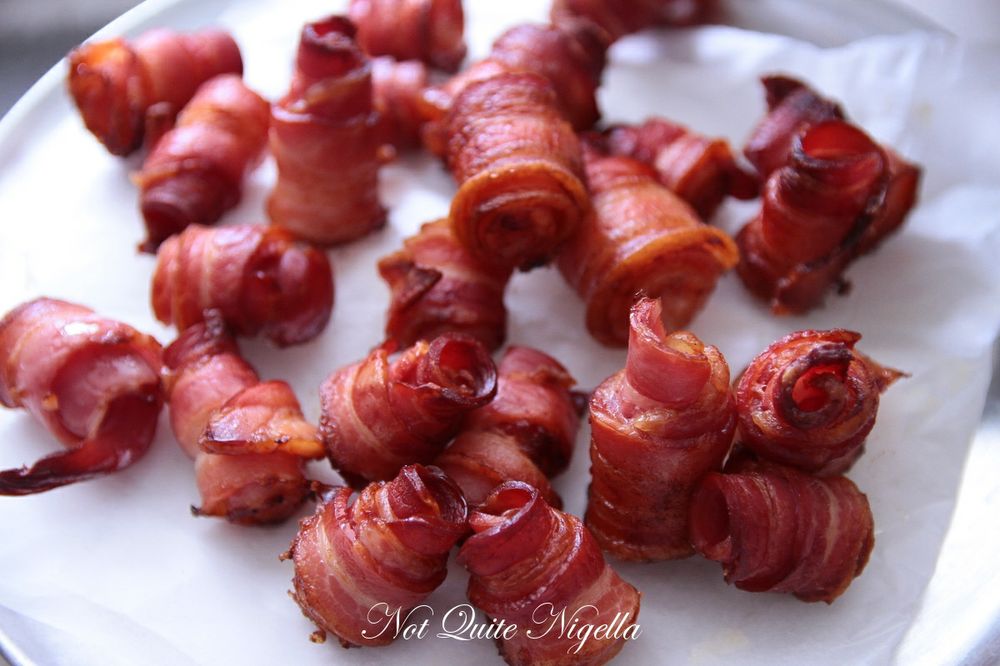 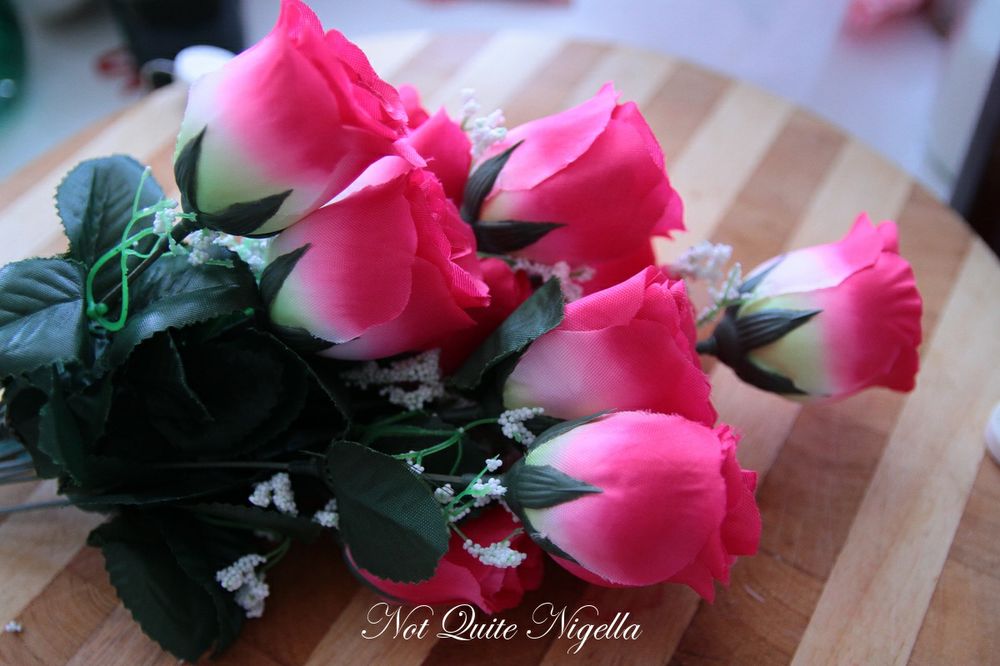 Step 4 - While the bacon is cooking, prep the rose stems. Dramatically, as if you pulling apart the roses from a scorned ex lover, pull each rose off the stem. Or do it gently, you pick. The faux rose is made up of many parts: the receptacle which is the larger part under the rose, the stigma and another part like a little cup as shown (I had to look up the name of the receptacle, do people actually know the names of these parts? Or perhaps they did better at biology than me ;)). 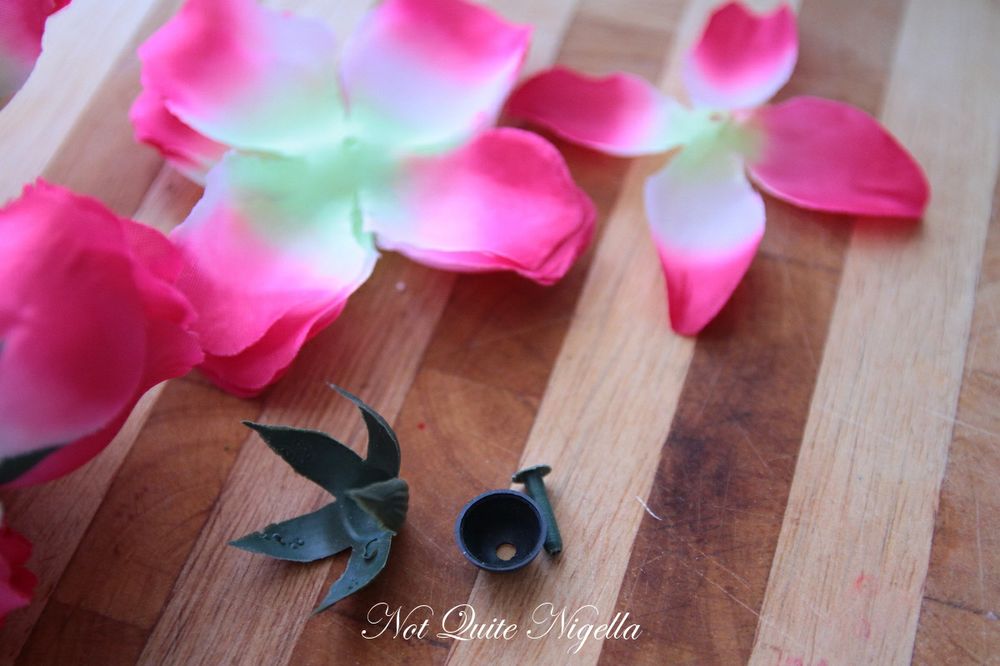 The three parts that you will put back together

There are usually three green parts and then the petals. Pull these apart and remove the petals. Then put the three green parts back together. The only difference is that once you attach these to the stem, gently push them down a bit further so that the stem sticks up about an inch as shown. This is what you'll use to attach the bacon roses to. Wash the stems in hot soapy water along with the stems and dry. 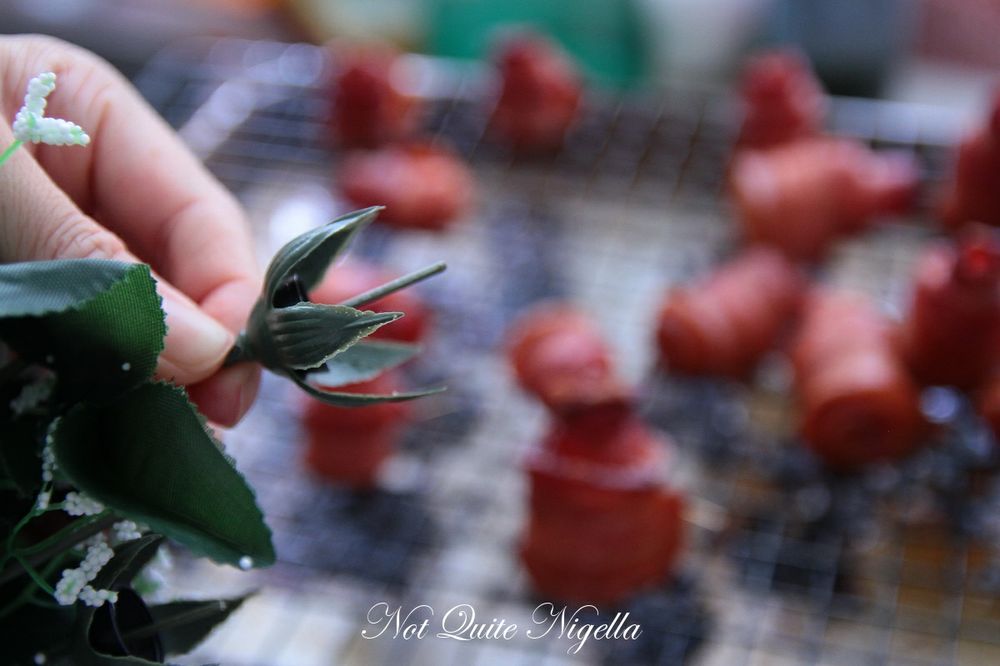 Step 5 - Place the stems in a vase or in wrapping paper. I find the bacon roses a bit easier to work with once they're cooler. Slide the roses onto the protruding stems and give them to your paramour! Note: they stay on the stems quite well because they are impaled on the stem. Just avoid tipping them over or upside down and you could actually have quite a transportable gift! 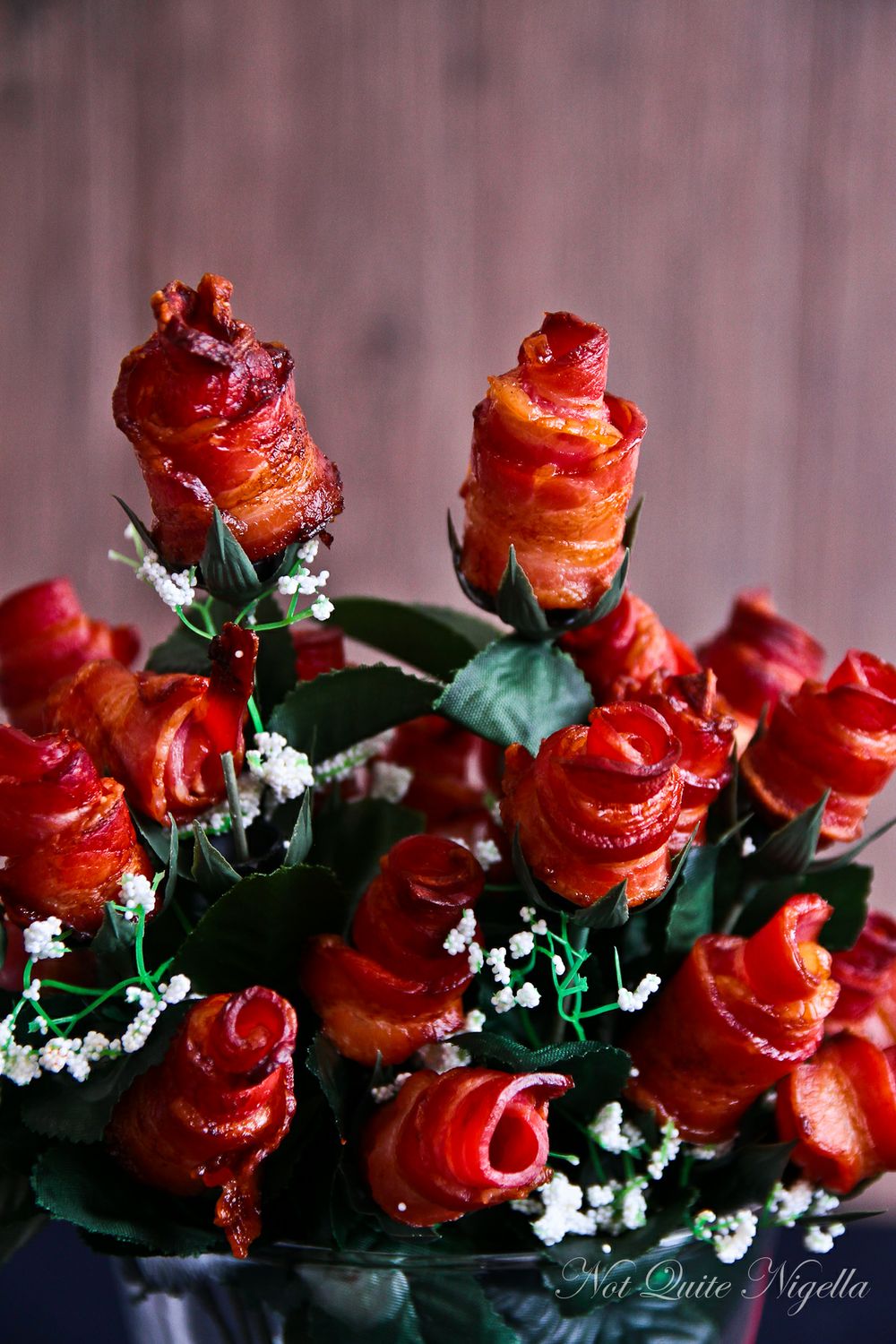