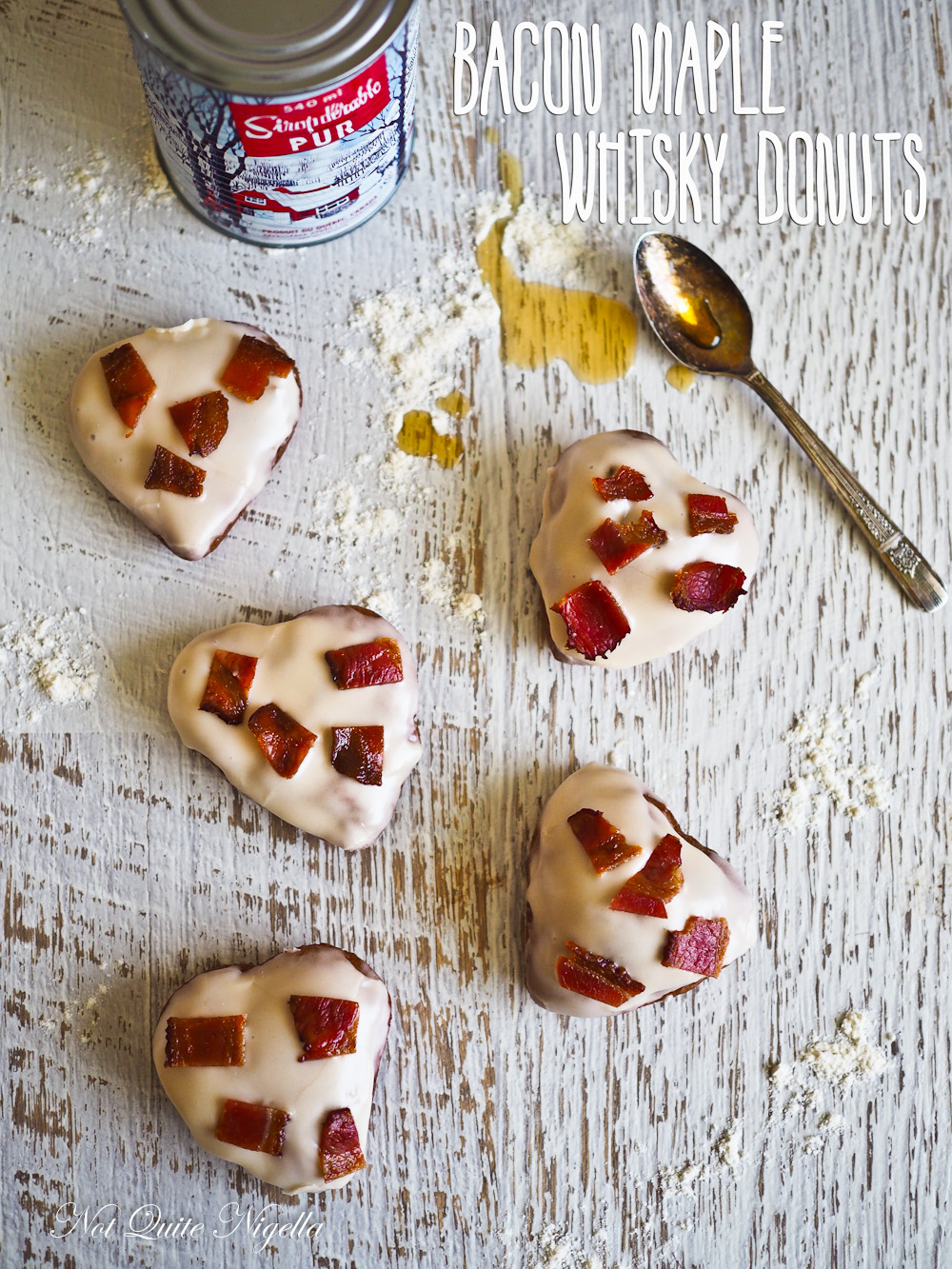 How do you say "I Love You" to a Baconoholic? One way is with these puffy heart shaped bacon maple whisky donuts. These soft, yeasted donuts are dipped in a delicious frosting made with maple syrup and whisky and then topped with real pieces of bacon! It's a little bit of salty and sweet in one!

There are some people that aren't on the bacon and sweet bandwagon. This treat clearly isn't for them. But if you love pancakes with maple and bacon I created this donut for you-it's my Valentines Day love letter to you in donut form. If you are as deep frying phobic that I am I totally understand but donuts are an exception. Donuts don't actually splatter unlike other foods because there is are no water droplets on them. Making the yeasted donut isn't very different from making bread and then there's the topping. Made with icing sugar, real Canadian maple syrup, Scotch whisky and bacon pieces it is the perfect food gift for either gender on V Day. 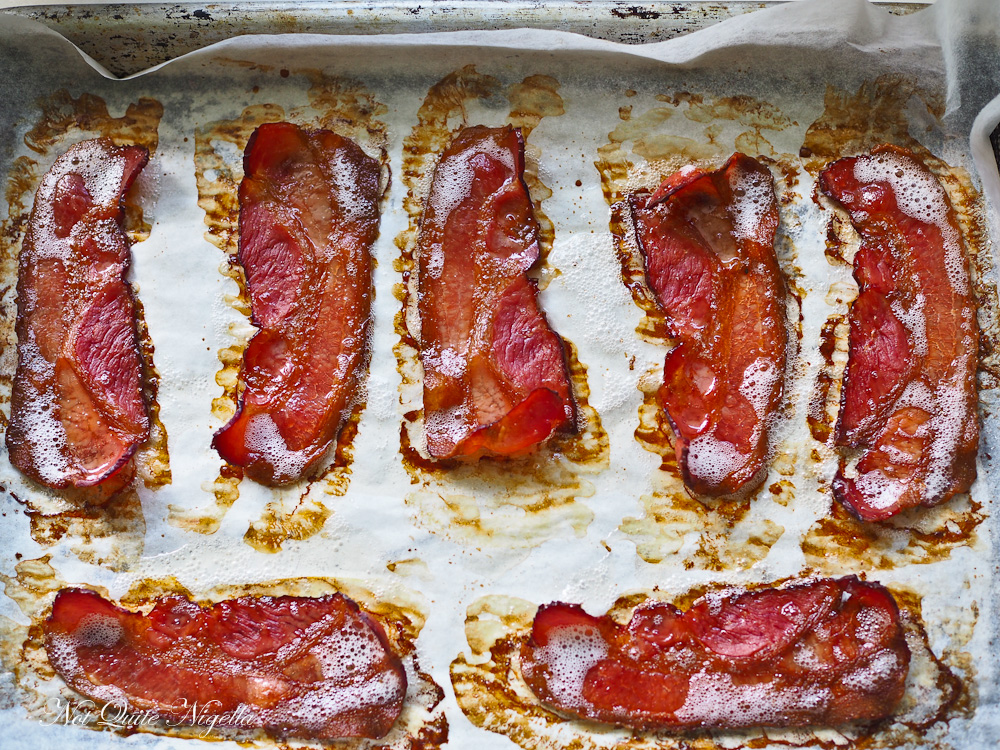 Speaking of Valentines, people often say that marriage is a series of ups and downs and that it's something that you have to constantly work on and nurture. In my humble opinion it is true although the ups should really outweigh the downs.

There is one thing that Mr NQN has been doing lately that delights me. Every day or two he messages me with a case that I need to investigate. That is because I want to be like one of my favourite television characters Olivia Benson and I have a not so secret yearning to be a police detective. "Hey Olivia, this is a new case for you to solve!" he'll say and link me to a news story. 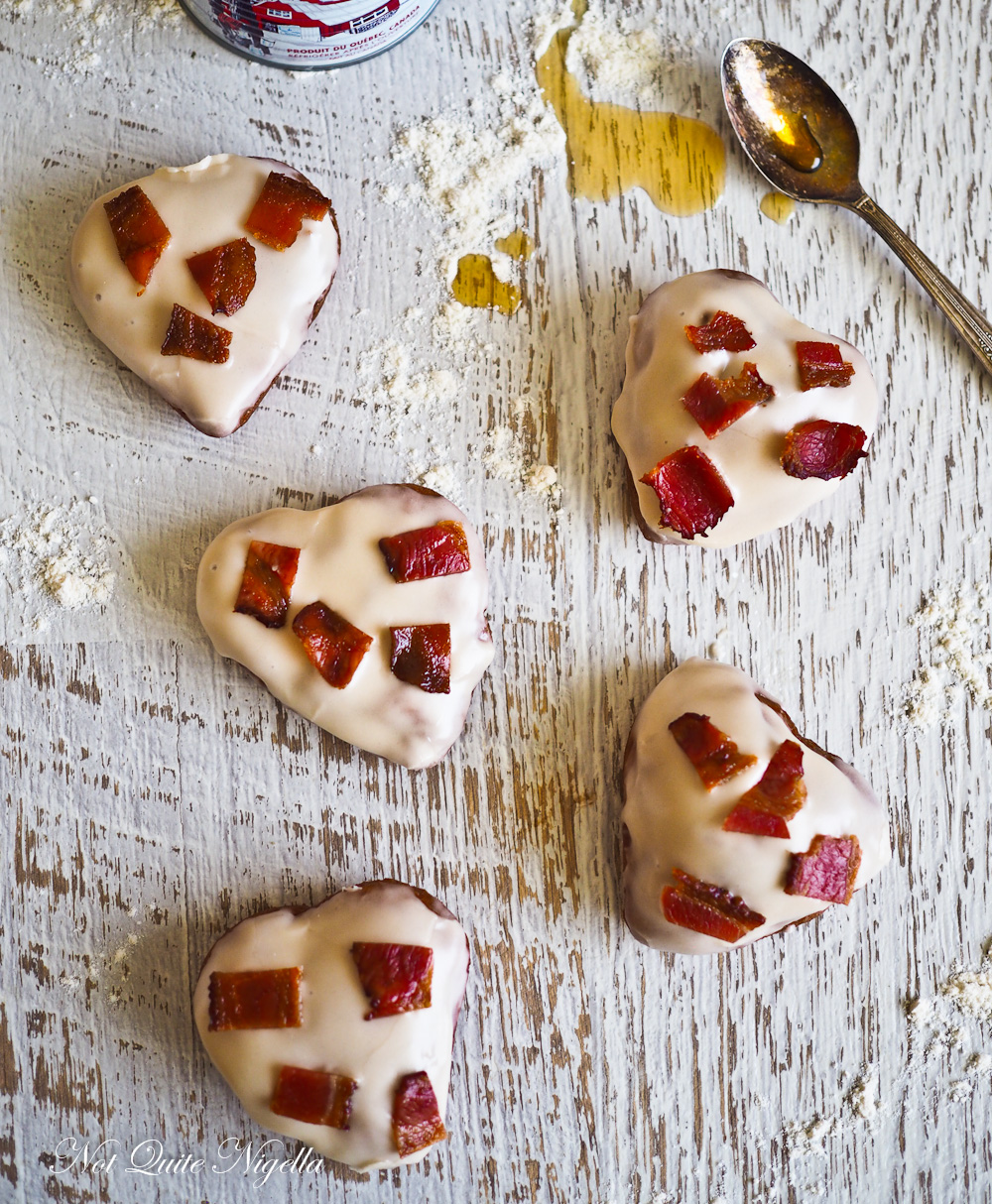 It's his way of saying "I'm thinking about you" at the same time as poking fun of me too. Because you should probably never take things too seriously (although don't listen to me for marital advice because the last thing he called me was a "maniac"). At the time I was muttering something about bacon, maple and whisky and when I asked him what else he would put in the perfect donut he pondered it for a second before answering, "Nothing, it's perfect like it is."

And you know right? He was right. Damnit :)

So tell me Dear Reader, what are your tips for a happy spousal or family relationship? Are you into the bacon and sweet combination? What is your fantasy job or favourite tv character?

Makes around 20 donuts (depending on the size of your cutters)

Step 1 - Place the flour and yeast in the bowl of an electric mixer fitted with a dough hook. Mix for 30 seconds. In a jug, whisk the milk, egg, maple syrup and butter. Set the mixer on the lowest speed and pour the liquids into the flour mixture. Knead until elastic-it should take about 5 minutes or so but test by pinching and pulling the dough.

Step 2 - Meanwhile, fry 2 rashers of streaky bacon in a frying pan until crispy. Drain on absorbent paper and cut into small pieces.

Step 3 - Place in a warm, draught free place for 1 hour or so and allow to triple in size. Punch down and knead in the salt. Allow to rest for 10 minutes, then roll out into a half inch thick rectangle of dough. 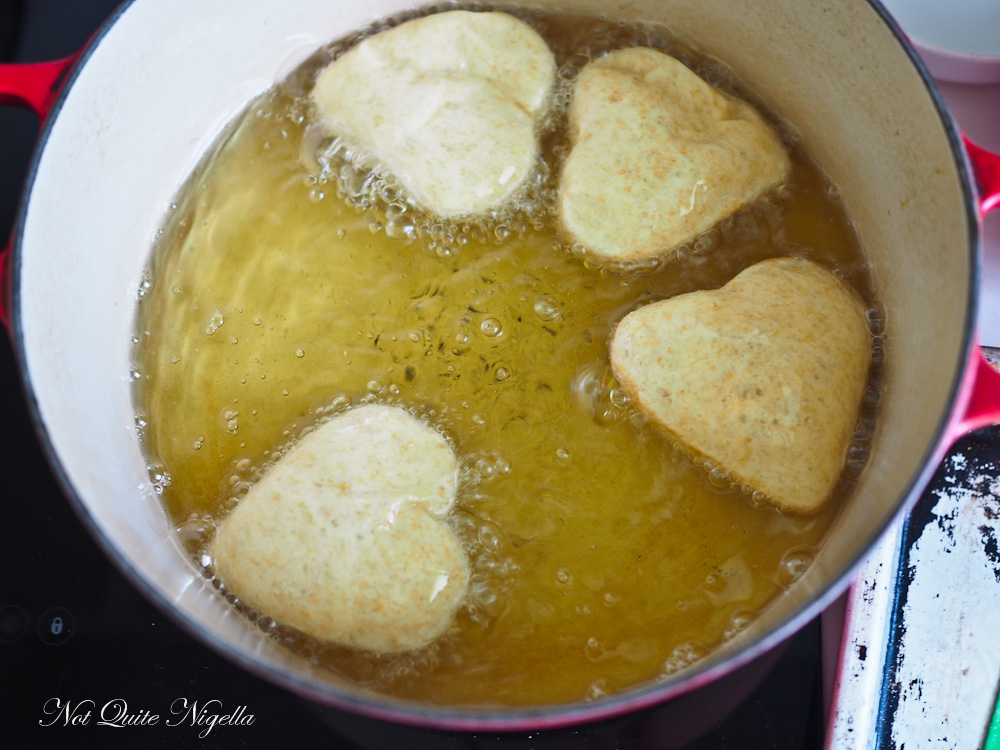 Step 4 - Heat a pot with 1-2 inches of oil and allow it to come to 196C/385F. Meanwhile, cut out hearts and place on a floured surface. They will start to rise again.

Step 5 - Fry in batches-I did around four per batch. Don't crowd them in the pot as you don't want the temperature to go down too much. Fry for 2 minutes on each side until golden. Drain on paper towels. 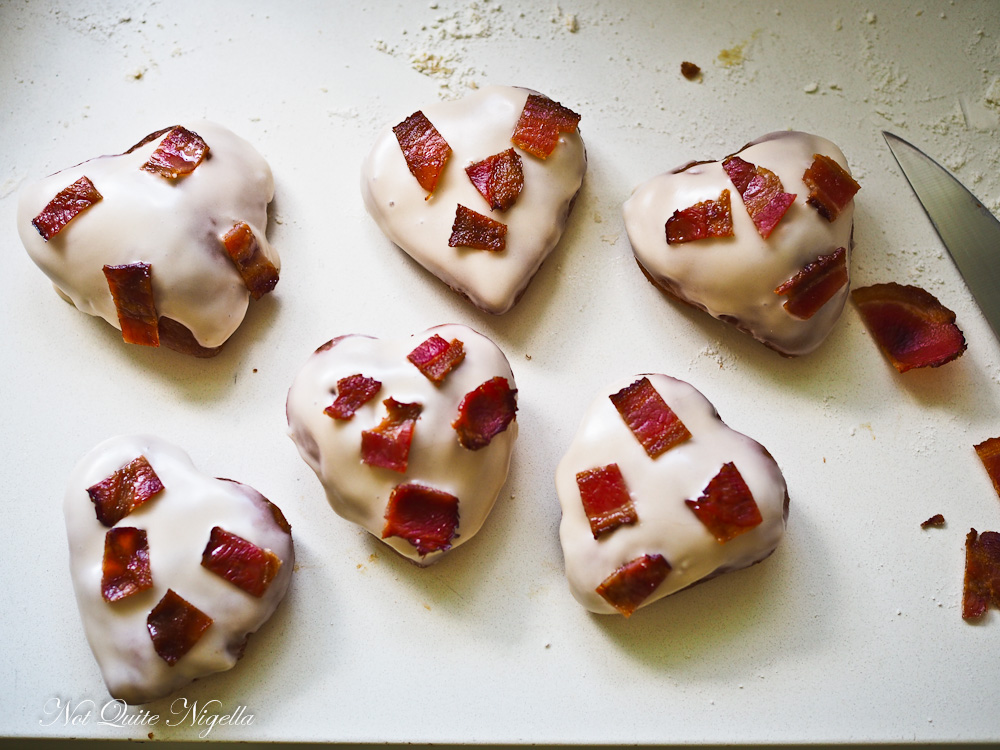 Step 6 - In a food processor blitz the icing sugar until the lumps are gone. Add the maple syrup and whisky. Then add enough water to form a dippable icing. Dip each donut into the icing and dot with bacon pieces.