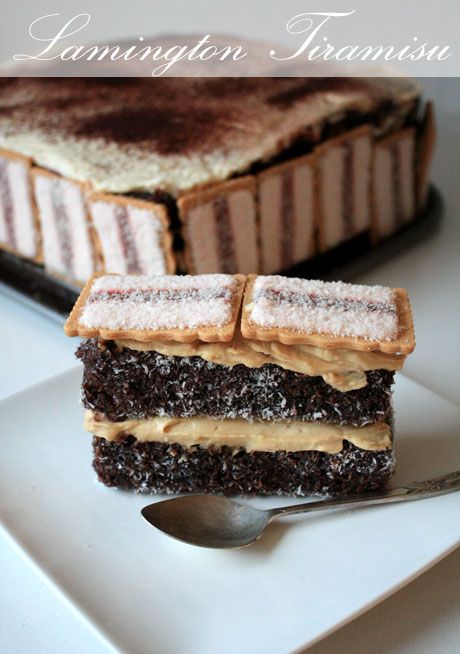 When I was young the things that made me laugh were jokes or speeches starting with "Ladies and Germs" and silly slips of the tongue like when I called a groom a "broom" - I recall laughing so hard I caused myself a stitch. The hardest thing in life was which Barbie to ask for for my birthday (Barbie Fashion Face bien sur!) and then the most fabulous cakes were either sponge cakes with jam and cream in the centre with pink icing or lamingtons. What was not to love about a coconut dusted chocolate coated vanilla sponge with some jam and cream spread across the middle? 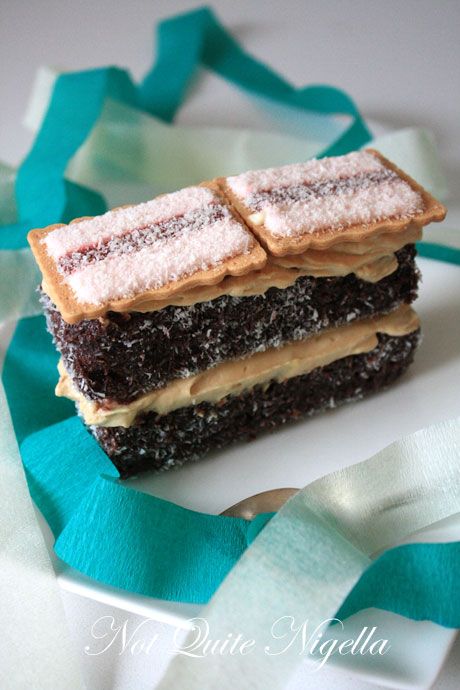 Thankfully my tastes in both jokes and food have  matured but I still do like a good, fresh lamington. I knew that this year for Australia Day I wanted to make something amazingly good but also very Australian. I toyed with the idea of using bush spices but knew that my overseas readers would have difficulty obtaining these. It was only when a friend and I were joking about holding a retro Australia Day party using our favourite Australian  foods from childhood that the idea struck me. The foods we discussed included Redskin Splits, Bubble O Bill ice creams, Cheezels, party pies, sausage rolls (with tomato sauce of course), chocolate crackles, honey joys, Iced Vo Vos and of course lamingtons. Then I realised that I had two key ingredients to make a fabulous Australia Day dessert. 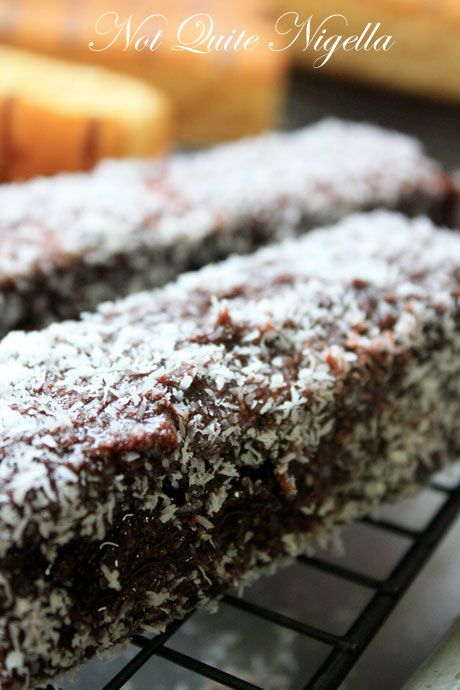 Please know Dear Reader that I am not setting you up for a lot of work with this one. This can also be done with store bought lamingtons and is a fast and fabulous way to put together a dessert as it doesn't require the usual soaking time for tiramisu as you are using sponge finger biscuits and the sponge is soft enough. You could make this and serve it straight away or make it ahead of time e.g. the day before and unclip it and have it ready to serve. You could also do individual lamington tiramisus which have a more elegant look and all they require is a little spreading of the mascarpone and you could probably get a male into the act by telling him that it's really just like laying mortar for bricks.  Mr NQN was fabulous help with this. 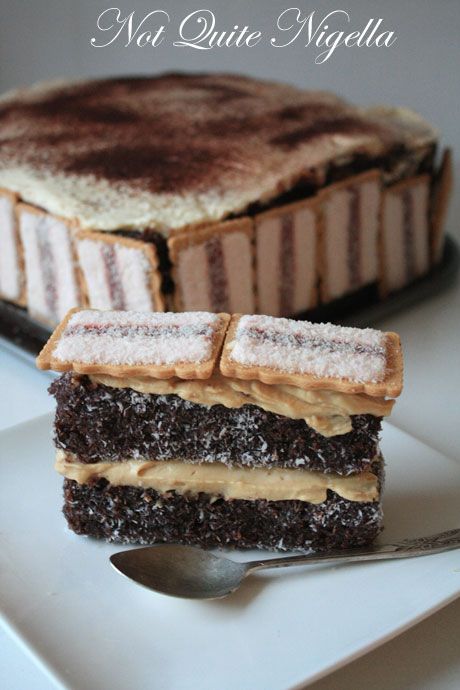 I didn't use a store bought lamington. Instead I used some Ferrero sponge bars that I was sent as part of a Christmas gift from the nice people at Ferrero and their fabulous PR company. They were perfect for the job and these bars were even filled with chocolate cream to make them even more luscious. If you can't a hold of these, and you probably won't be able to as I haven't seen them on shelves, I'd recommend using lamingtons. I've given a recipe using a store bought lamington as this is much easier and there's no shame in using store bought when the whole point of Australia Day is celebrating it by having the day off work!

So tell me Dear Reader, which is your favourite holiday and why? And Happy Australia Day for tomorrow! :)

Step 1 - In a small cup, dissolve the coffee powder in some warm water. Beat the mascarpone with 1/2 cup of icing sugar and coffee mixture until thick and able to keep its shape and set aside. In another bowl, whip the cream with 1/4 cup of sugar until stiff and set aside. 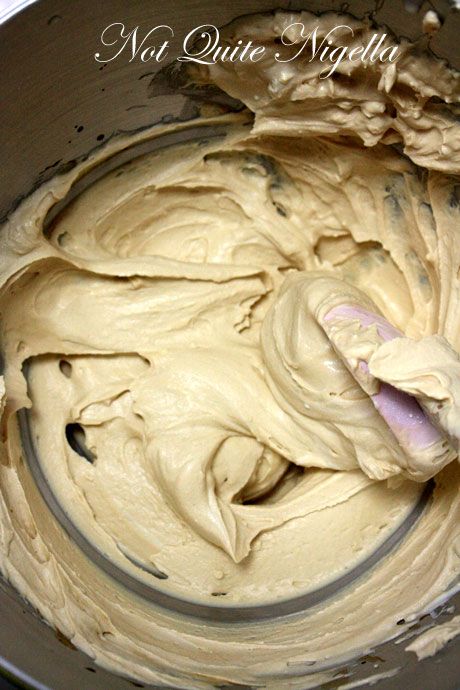 Step 2 - Line a square or round springform cake tin with half of the lamingtons fitting them snugly or trimming them if necessary. Drizzle with half of the kahlua or frangelico and then spread with raspberry jam. Then spoon over the coffee mascarpone and then smooth this out with a palette knife. Place a second layer of lamingtons and repeat with kahlua or frangelico and then spoon over whipped cream and using a clean palette knife smooth this over.

Step 3 - Spread a little cream behind an Iced Vovo biscuit and stick onto the side of the cake.

Making your own lamingtons

Step 1 - Cut sponge into desired pieces-lamingtons are usually square or rectangular. Place dessicated coconut on a large plate or bowl. 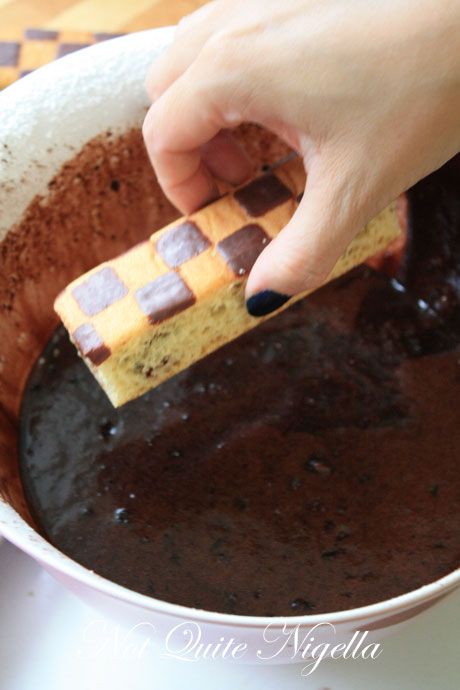 Dipping the sponge into the chocolate icing

Step 2 - Sift icing sugar and cocoa together. Mix the boiling water and butter until butter has melted and then stir into icing sugar and cocoa mix and mix until a smooth glossy icing is made. Dip sponge pieces in briefly coating the sponge all over and allow the excess chocolate to drip off. Place on coconut and using two forks, roll the chocolate coated sponge in the coconut. Having made a lamington, you are now granted honorary Australian citizenship! :) 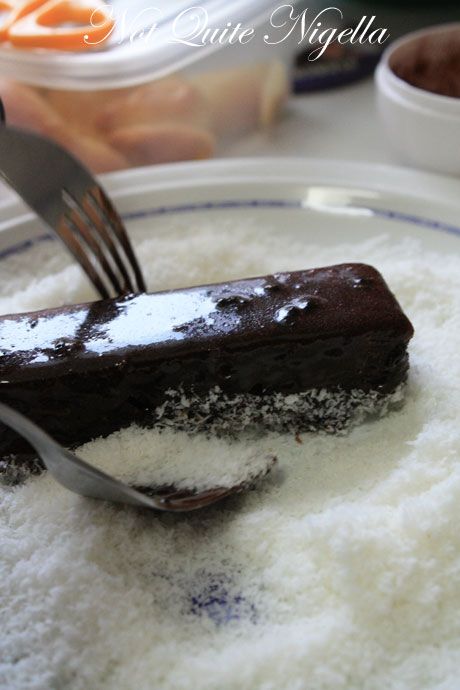 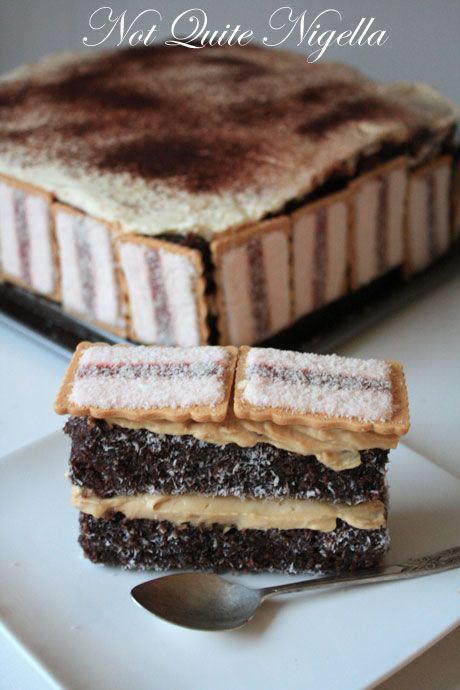