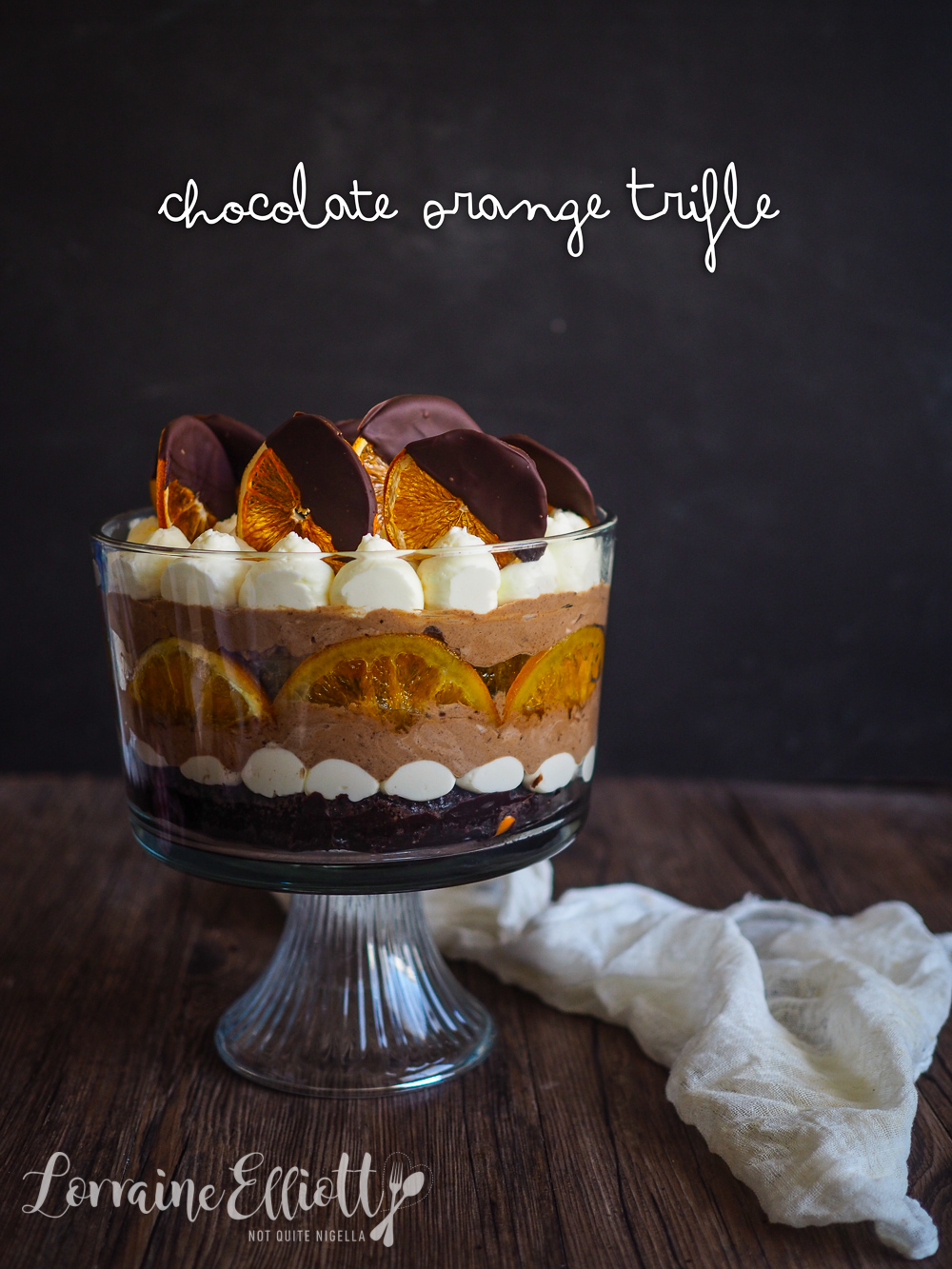 Last week, Woolworths asked me to create a mud cake hack to launch their newest mud cake flavour, Chocolate Orange. The mud cake is now in Woolworths stores for $4 for this week only. I had a friend's husband who was obsessed with Woolworths’ Chocolate mud cakes and would ask for that and only that for his birthday cake. 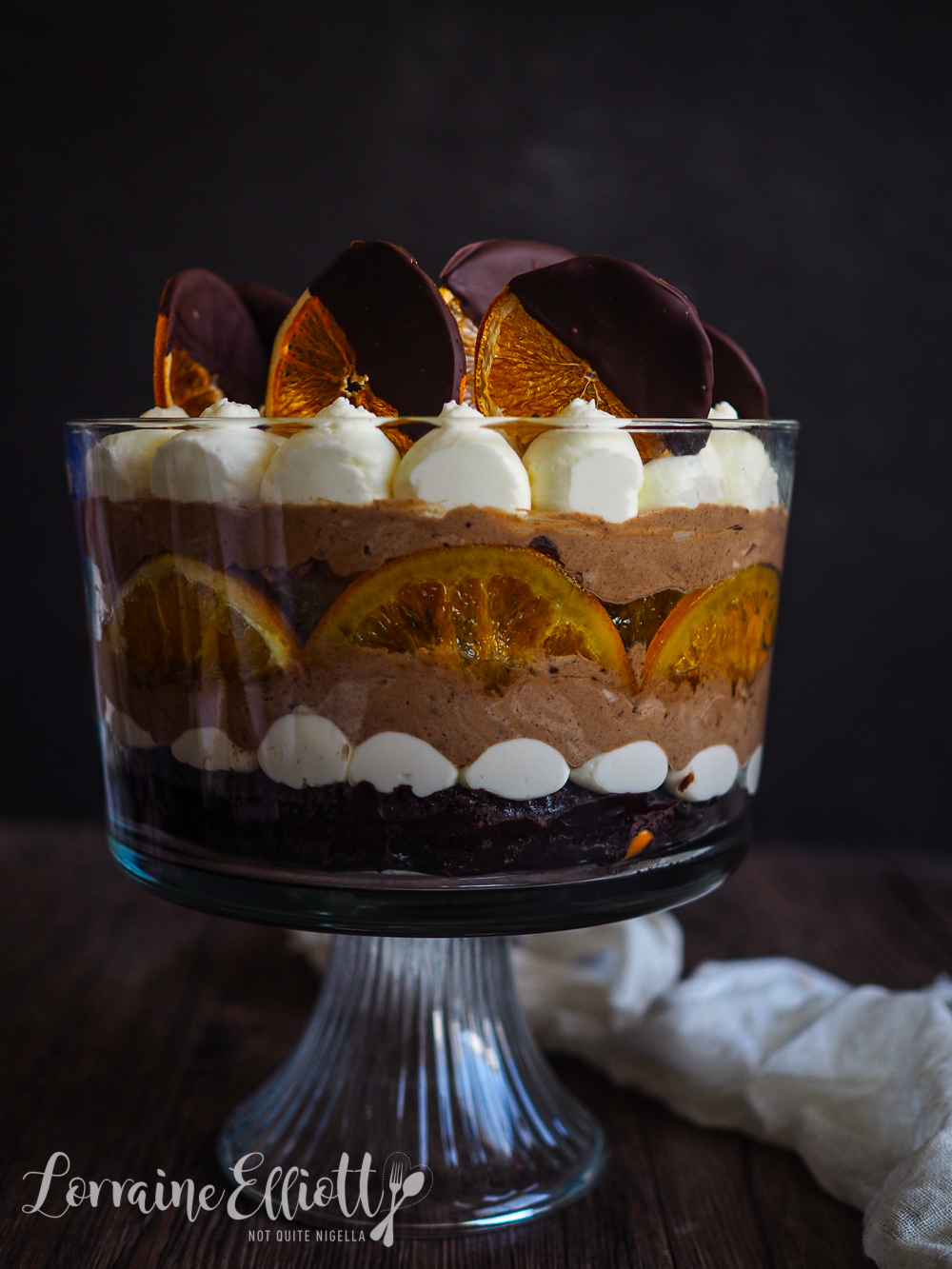 I don't often make trifle but when I do it's sometimes with bought cake as it can be time consuming to make everything from scratch. This is my version of a trifle because truthfully I don't like jelly in trifle but feel free to add in a jelly layer if you like (I'd probably suggest orange jelly). Also I am getting to like the chocolate orange flavour combo after years of eschewing it. I was so happy with the result that I considered posting it on the Facebook group dedicated to Woolworths mud cake hacks (yes there's a whole group devoted to it with 26,000 members!). 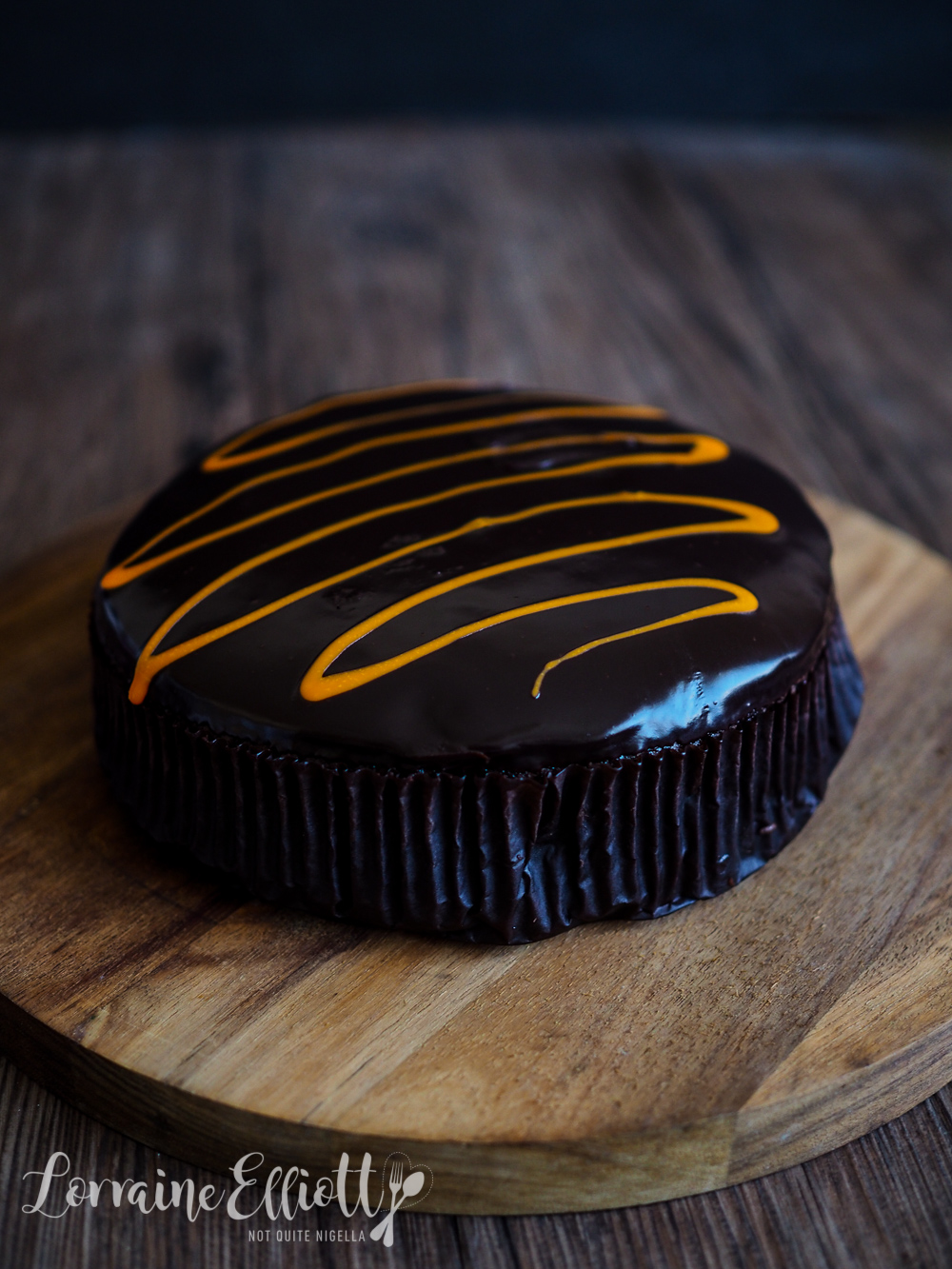 Speaking of social media, the other day I received a rather intriguing email. It was from Instagram and they were asking me to speak at a panel on food. I said yes straight away partly because it was finally nice to have a human contact at Instagram should anything go wrong. Although I hate doing speeches, panel discussions are fun. They allow you to bounce ideas off each other and it's like a conversation which I love.

I turned up to the Facebook office at Barangaroo. Security was tight but administered by smiling, happy blue t-shirt clad young men that looked more like techies than security. I thought in a pinch I could probably fight them off (not that I'd ever need to ;) ). 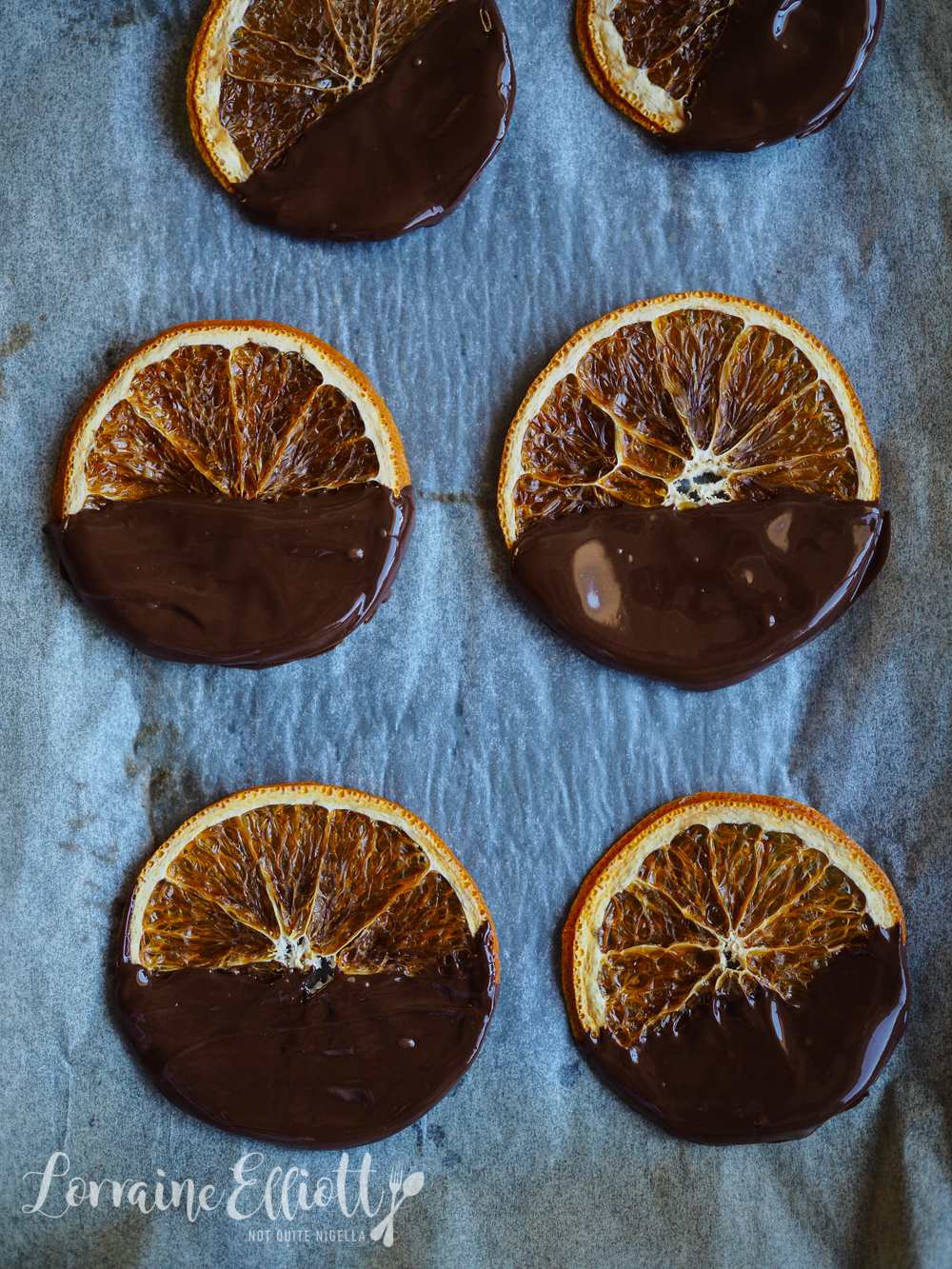 The panel was made up of restaurant people and me as the only blogger or influencer. I ended up learning some new things about Instagram. A friend once told me that they spent hours making sure that their grid was in "colour harmony" but this was quickly dispelled as they told me that people don't look at your overall grid that often. They confirmed that hashtags are very important. They also told everyone the most popular food hashtags, being: foodie, easter, instafood, food photography, delicious, yummy, instagood, melbourne, vegan and foodgasm. Personally, I would have guessed differently and would have thought that cake or chocolate might be in the top 10!

So tell me Dear Reader, when you make trifle do you buy or bake the cake part? Also, were the most popular hashtags a surprise to you? 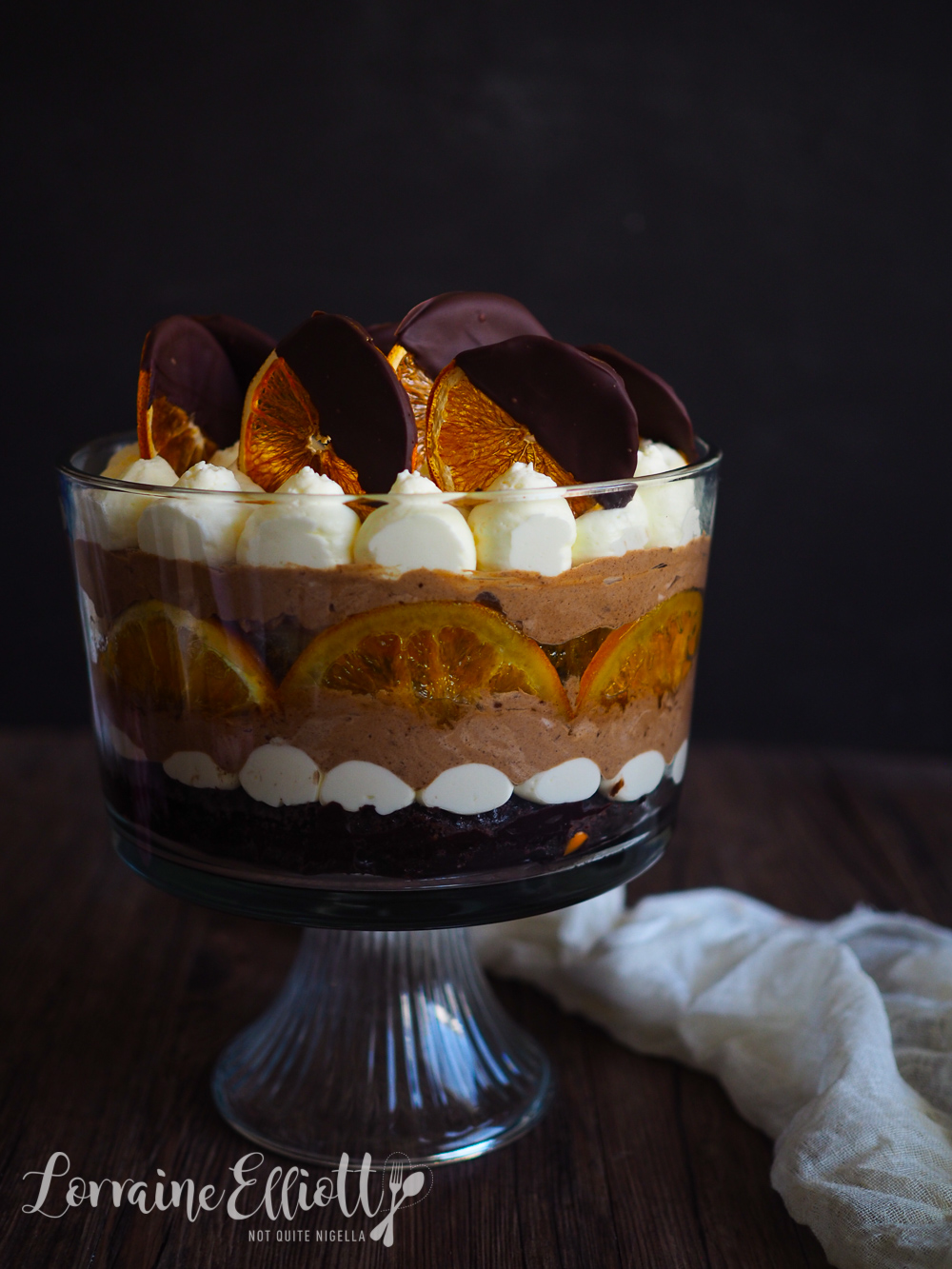 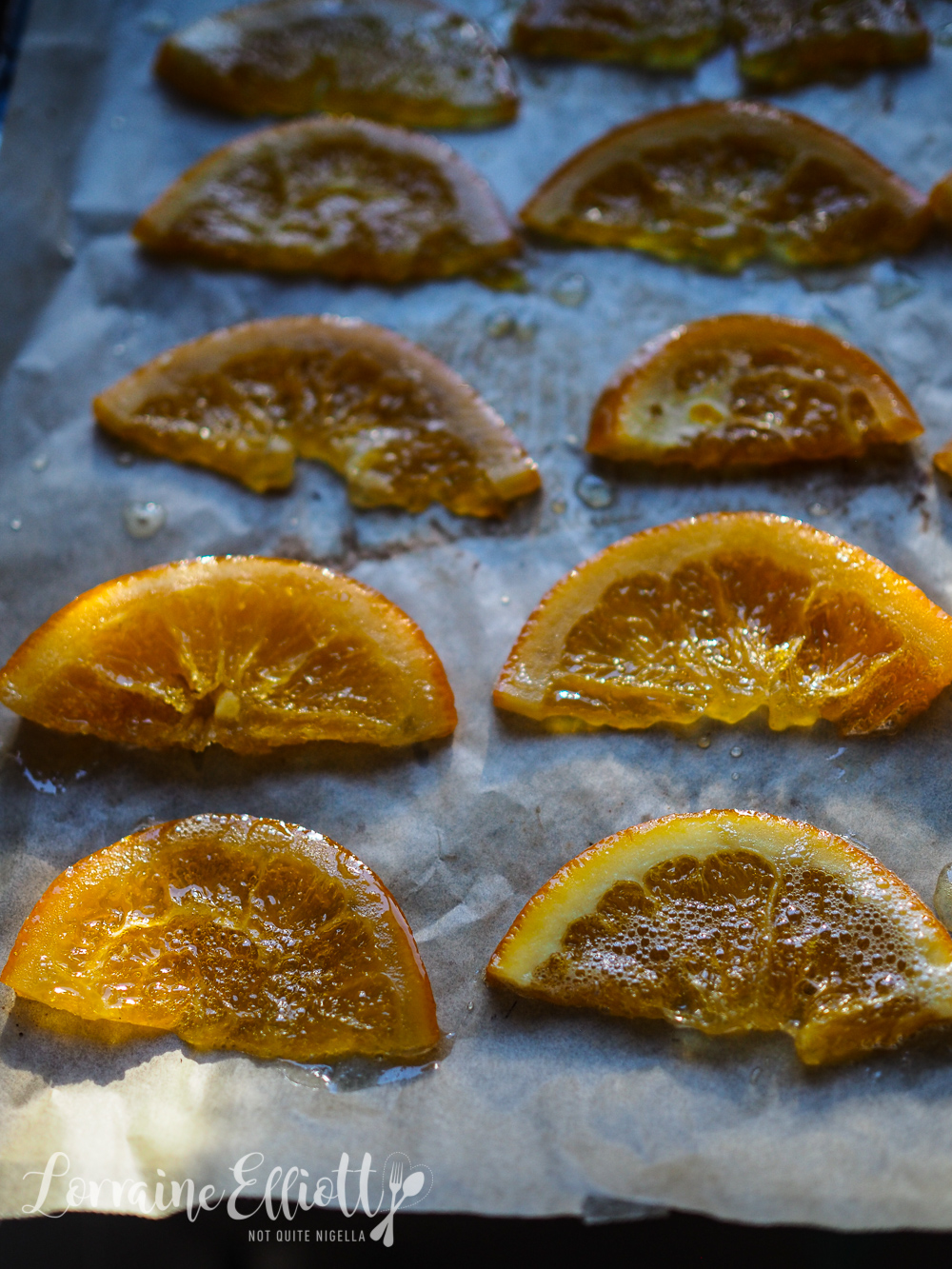 Step 1 - First make the candied oranges (you can do these a day or two ahead of time). Place the sugar and water in a small saucepan and bring to a boil. Knock heat down to a simmer and add the orange slices. Simmer until the syrup becomes a bit thicker and the oranges become glossy. Remove from the syrup and place on a parchment lined tray.

Step 2 - On the day you want to make it, make the cream and then the mousse. To create the orange cream, sprinkle the gelatine over the water and then melt in the microwave at 100% for 20 seconds until clear and liquid. Allow to cool for 5 minutes. Whip the cream and sugar until you get soft peaks. Add in the gelatine mixture and whip and then add the Grand Marnier. Place in a large piping bag.

Step 3 - To make the chocolate mousse melt the chocolate in a double boiler or in a microwave (be careful this doesn't burn as it contains nuts that can burn faster than the chocolate) and allow to cool for 5 minutes. Meanwhile whip the cream until you get soft peaks. Add the slightly cooled melted chocolate and whip until it becomes a light consistency making sure to mix in all the chocolate. Transfer to a bowl. 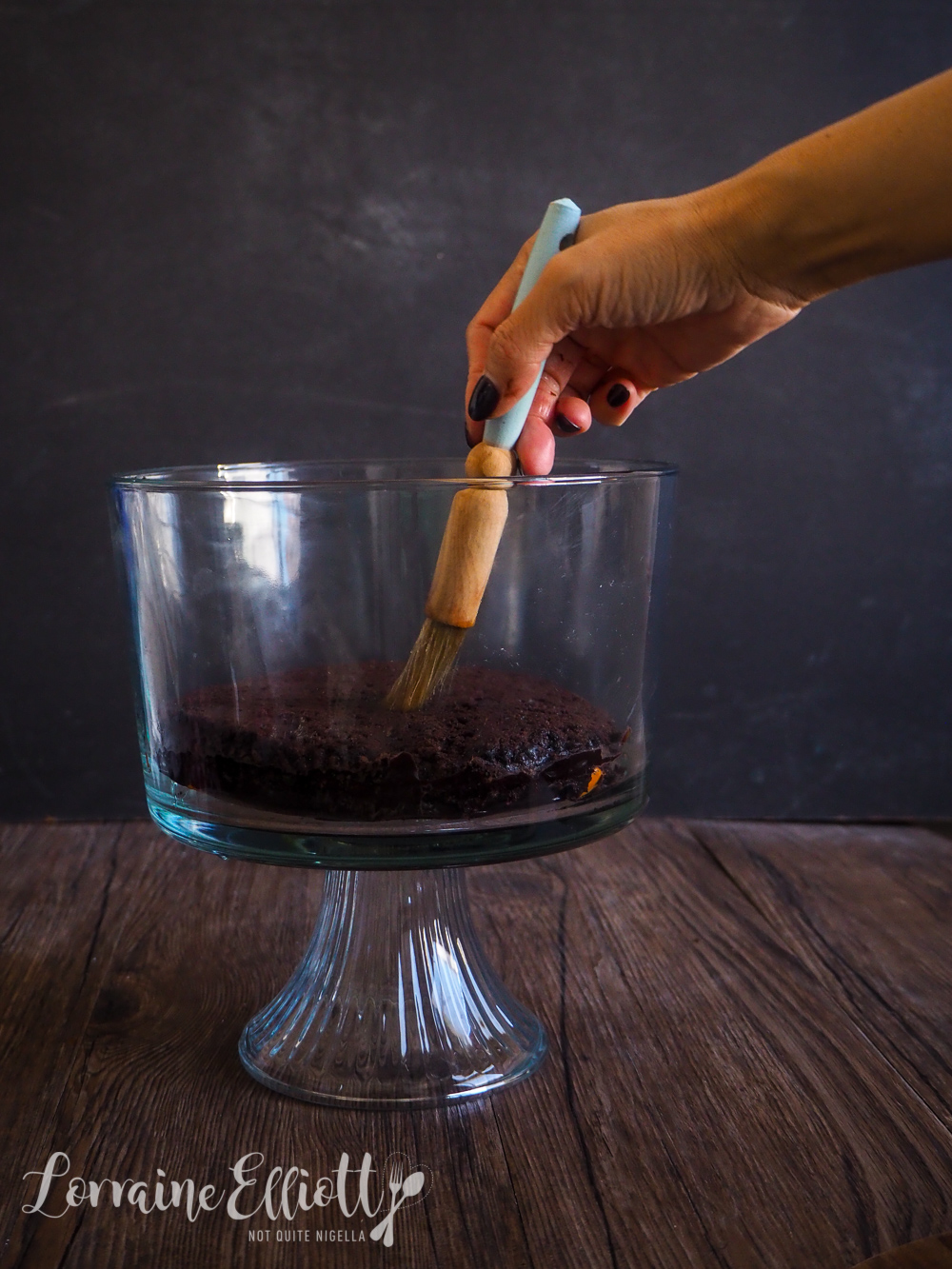 Step 4 - To assemble the trifle (this can be done the day before serving). Slice the Woolworths Chocolate Orange Mud Cake in half horizontally and place one half on the base of a trifle glass bowl cut side up. Brush with the Grand Marnier. 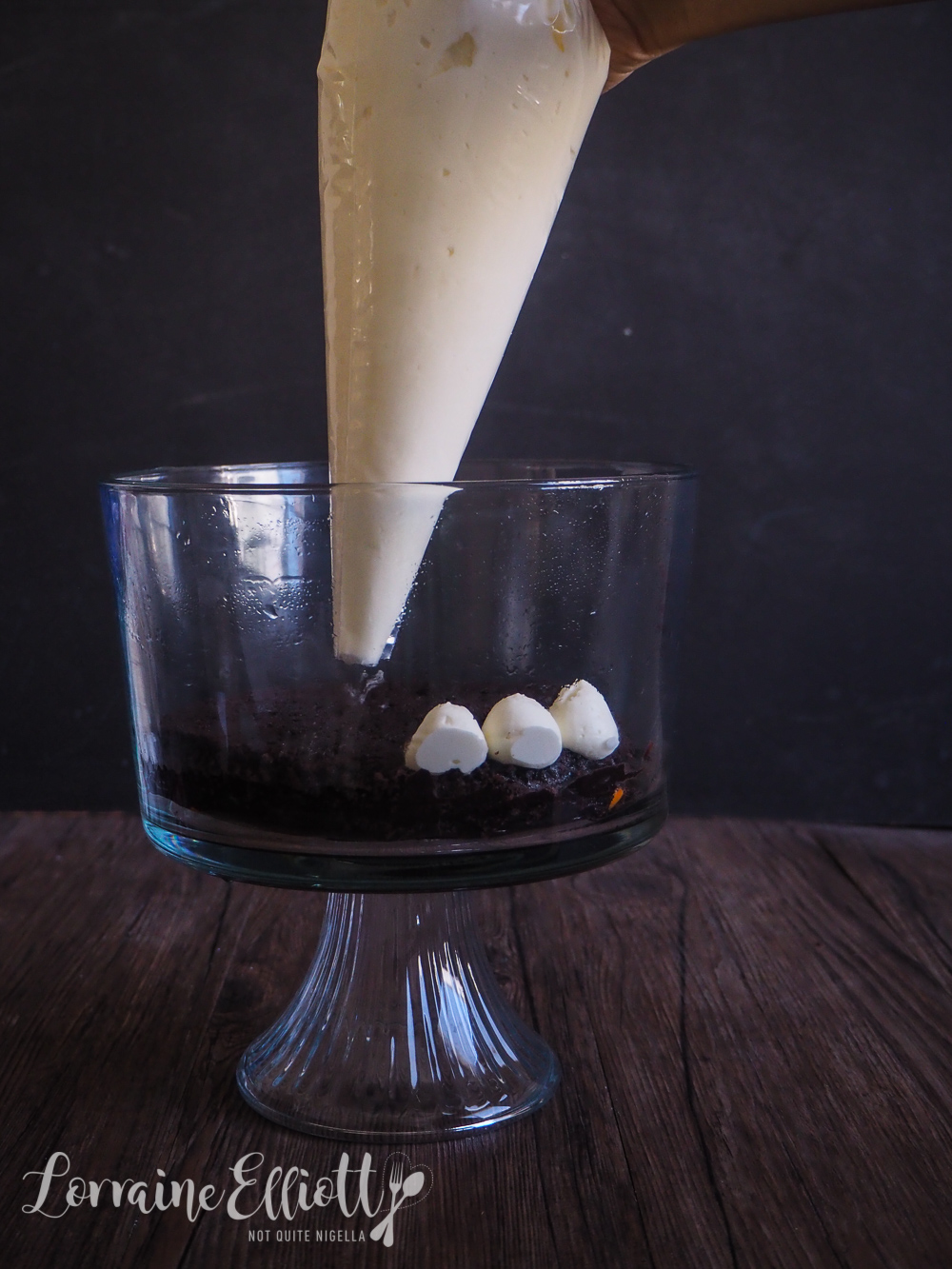 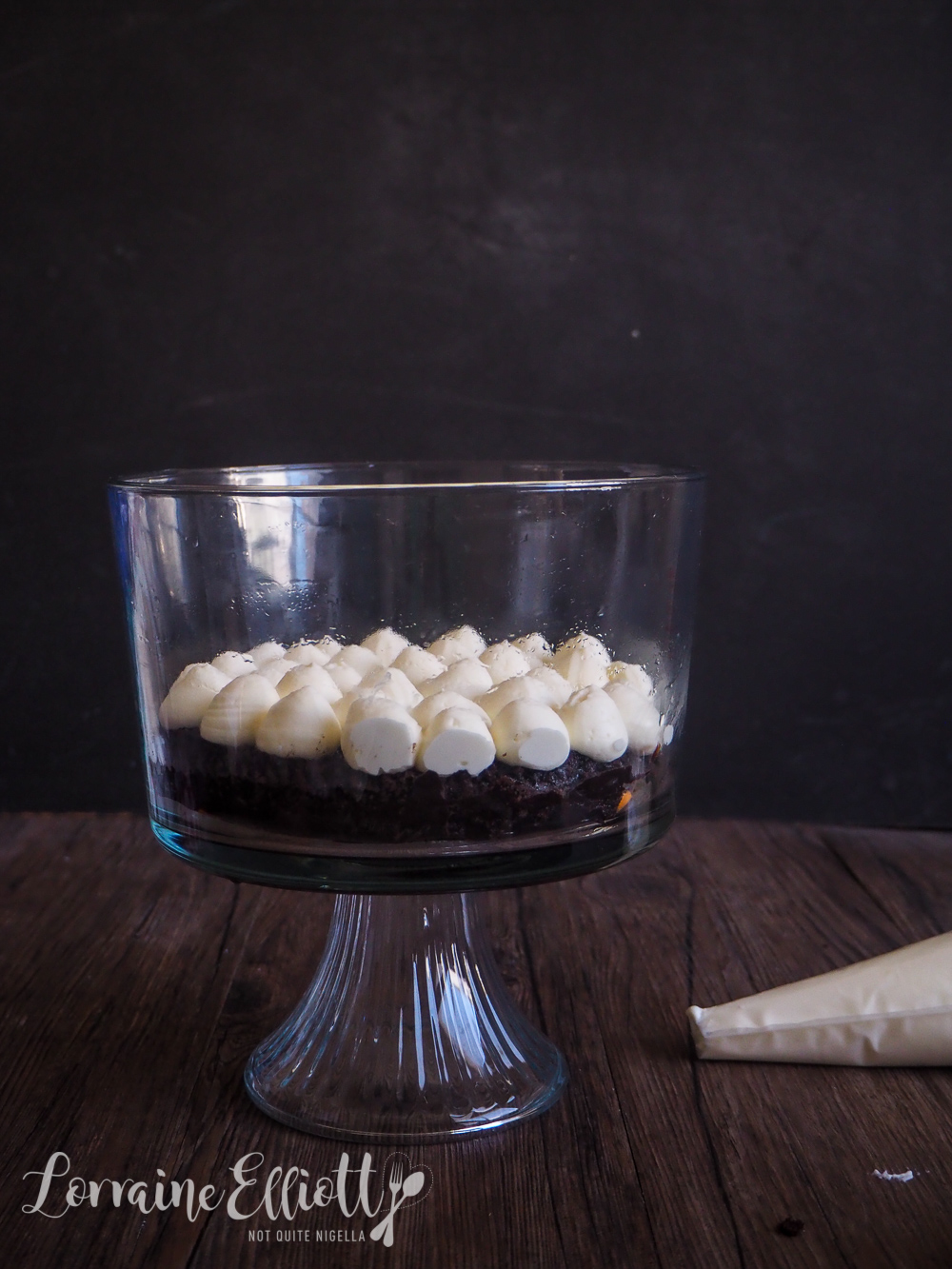 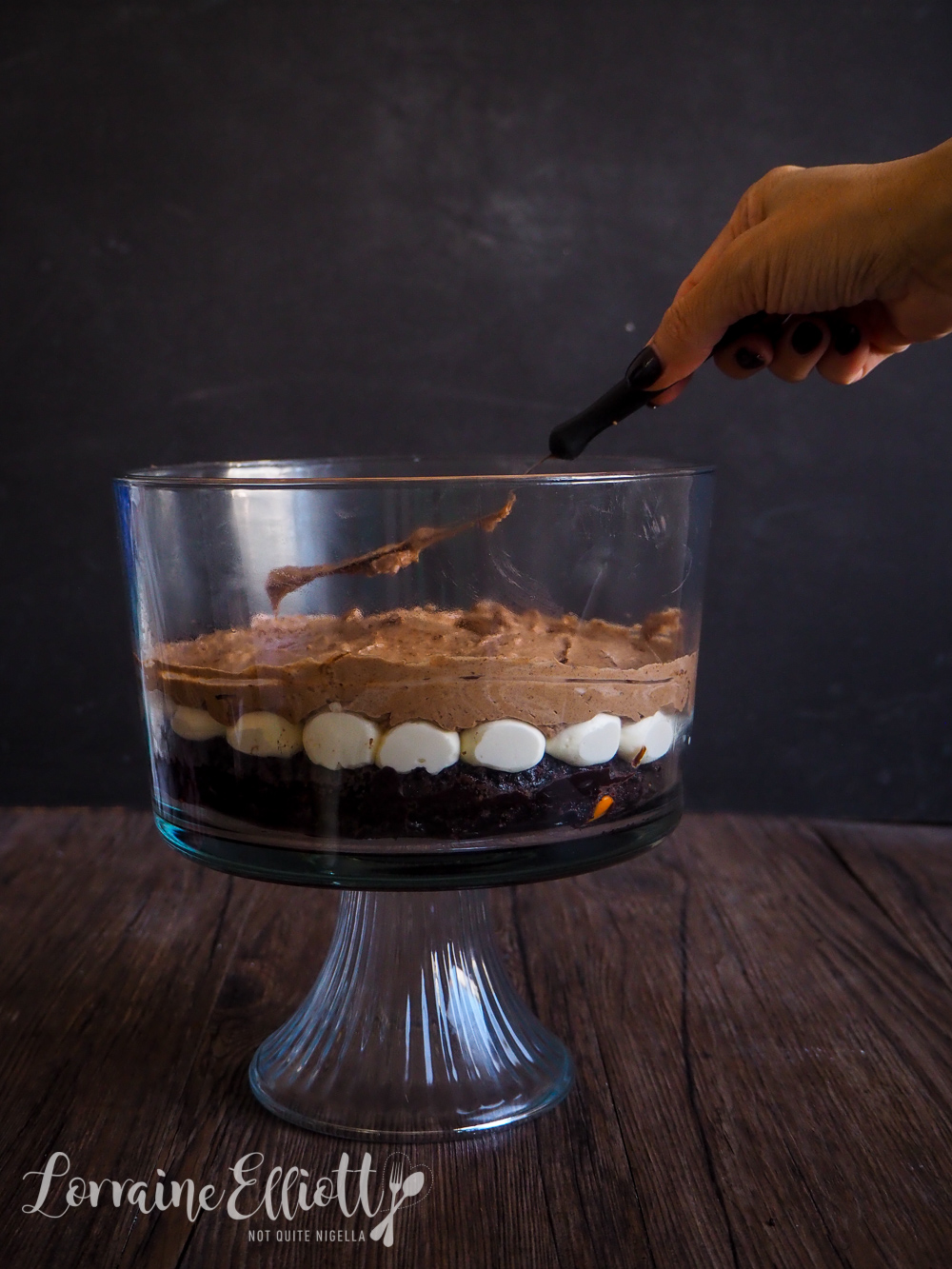 Step 5 - Pipe the Grand Marnier cream in dollops on top of the cake. Place in the fridge for 20 minutes to allow it to set. Then spread half of the chocolate mousse on top of this. 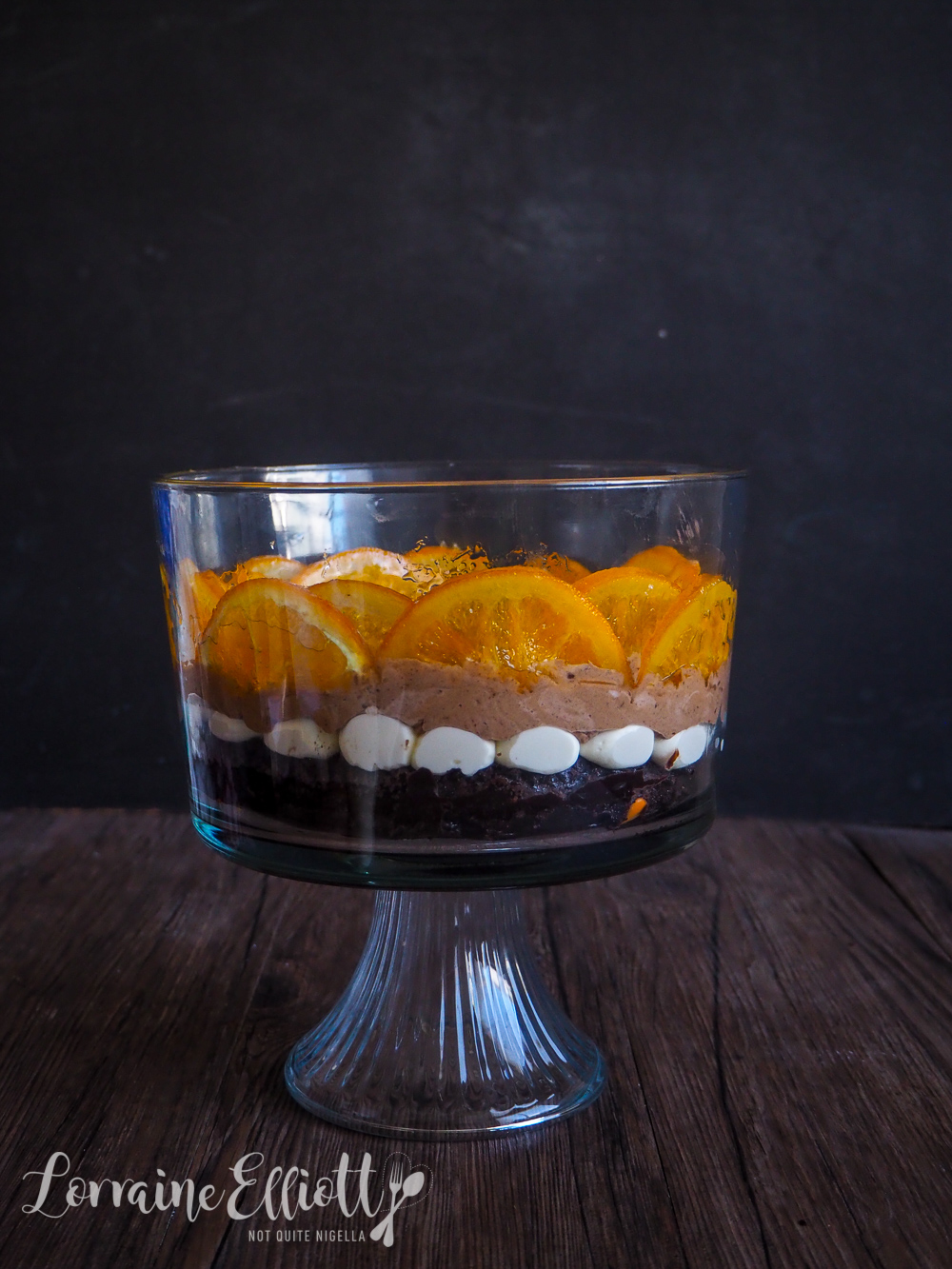 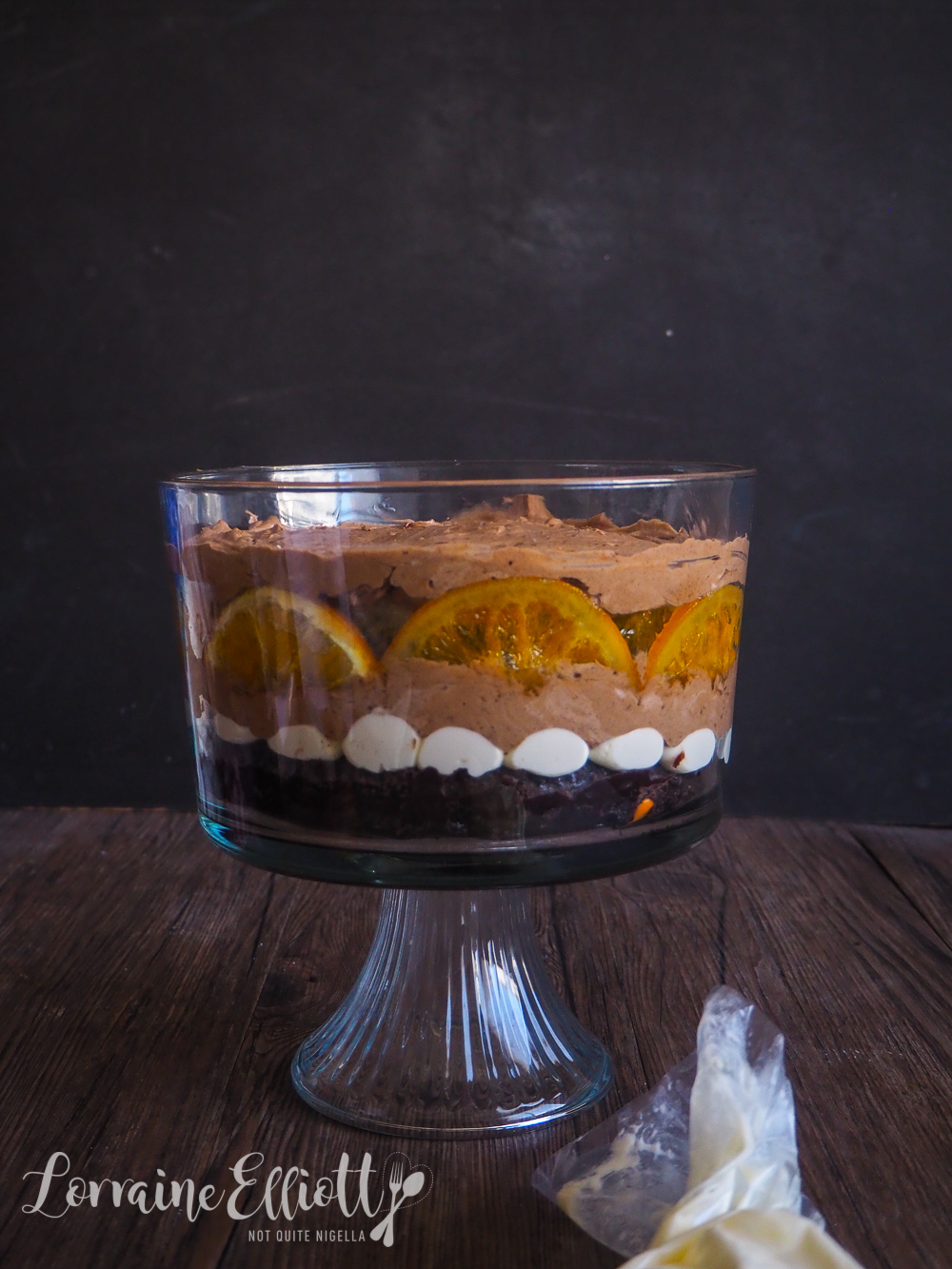 Place the orange slices around the outside of the trifle bowl and then double the layer placing them slightly offset so that they overlap. Place the second layer of chocolate cake inside this and brush this with Grand Marnier. Then top with chocolate mousse and then pipe the remaining Grand Marnier cream on top. Place in the fridge for the cream to set. 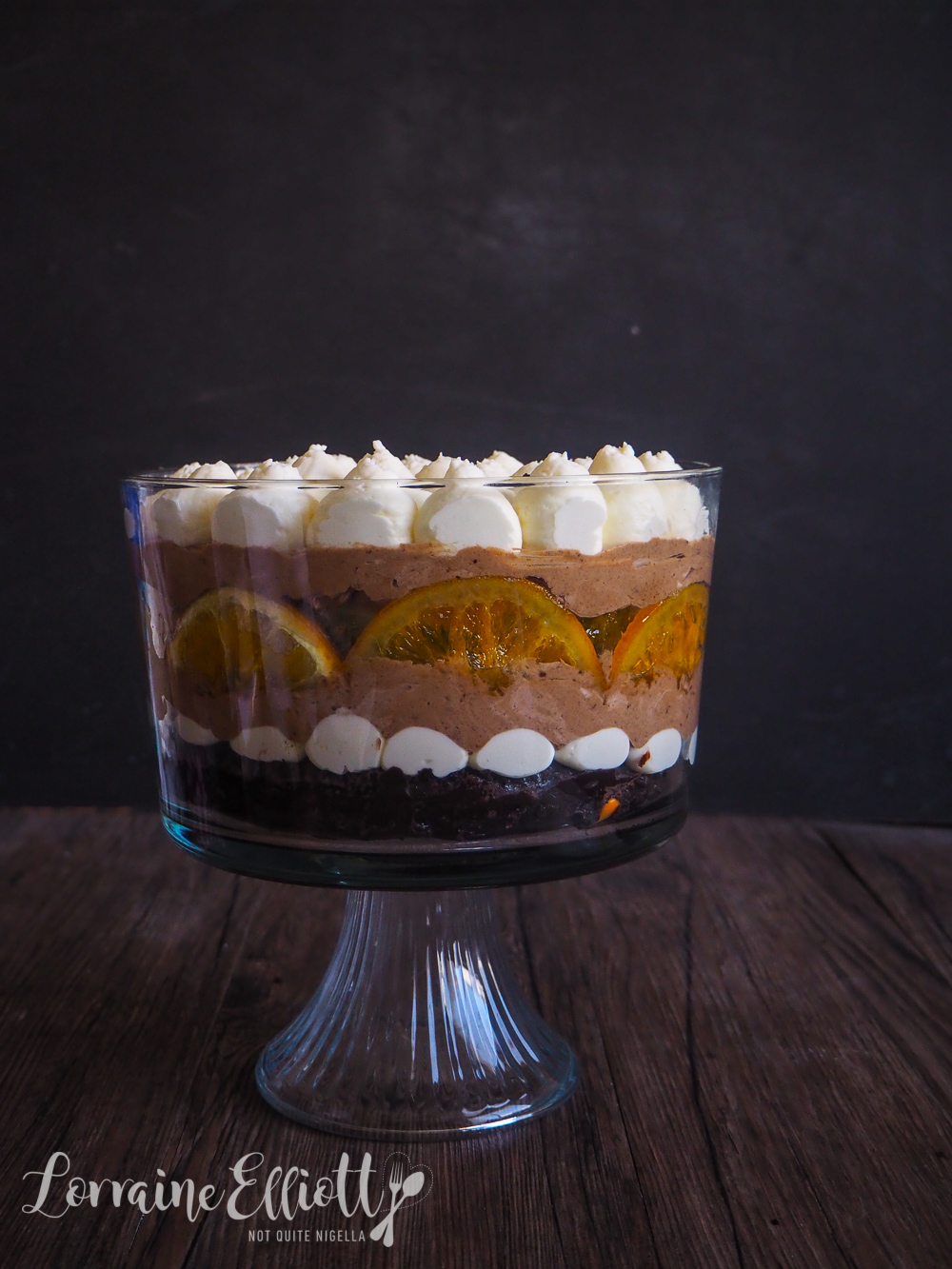 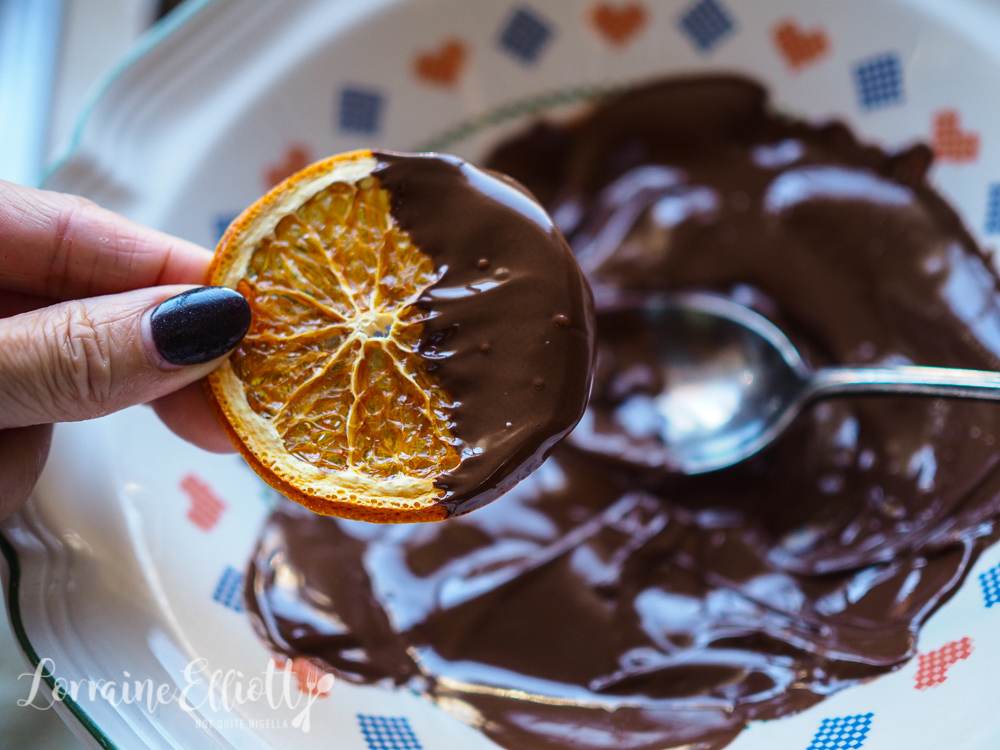 Step 6 - While the Grand Marnier cream is setting make the chocolate dipped dried oranges. Melt the 50g/1.7oz of chocolate in the microwave or a double boiler and then dip half the oranges into the chocolate. Place in the fridge to set and then once the chocolate has set, place on top of the trifle. 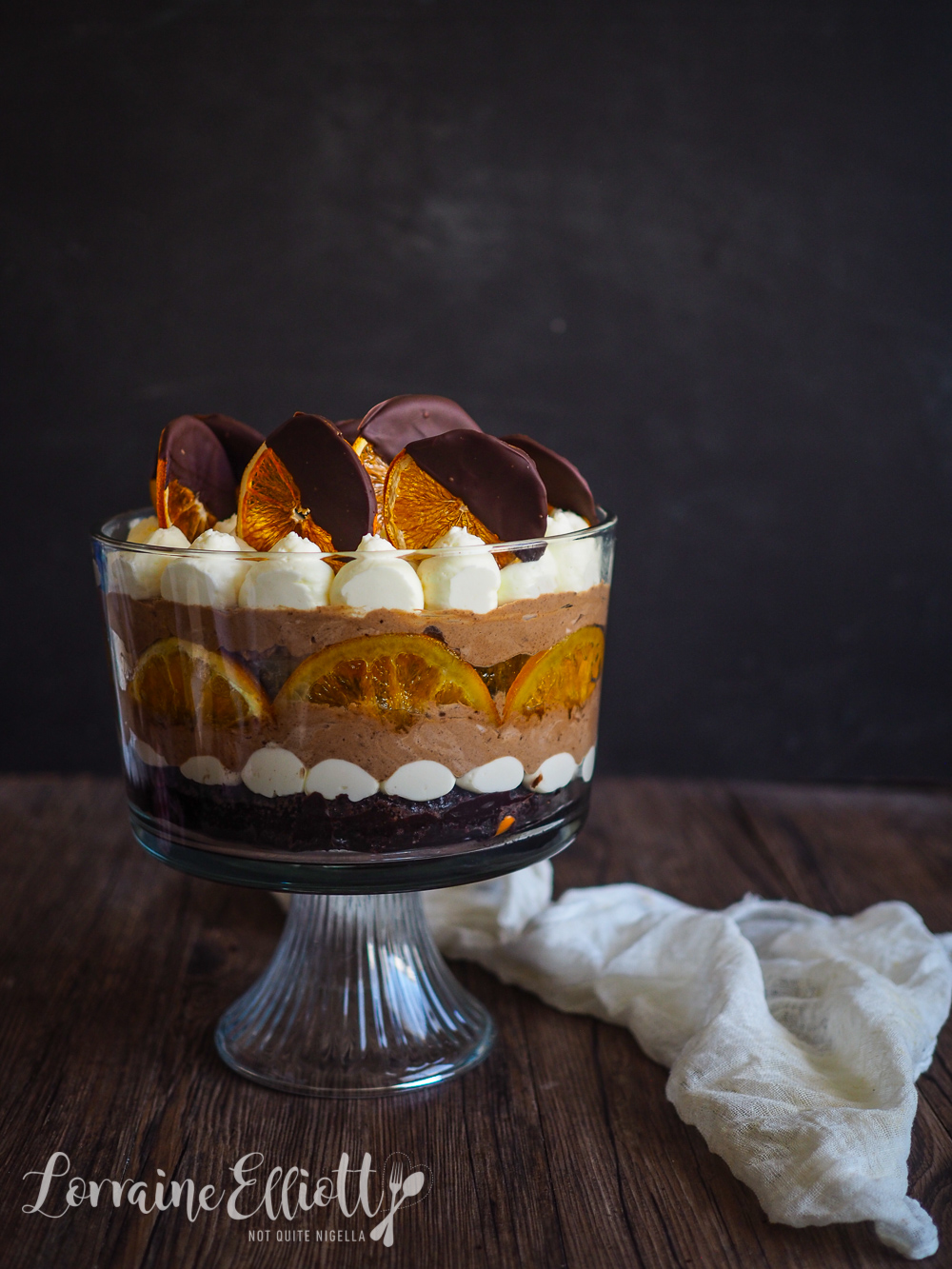