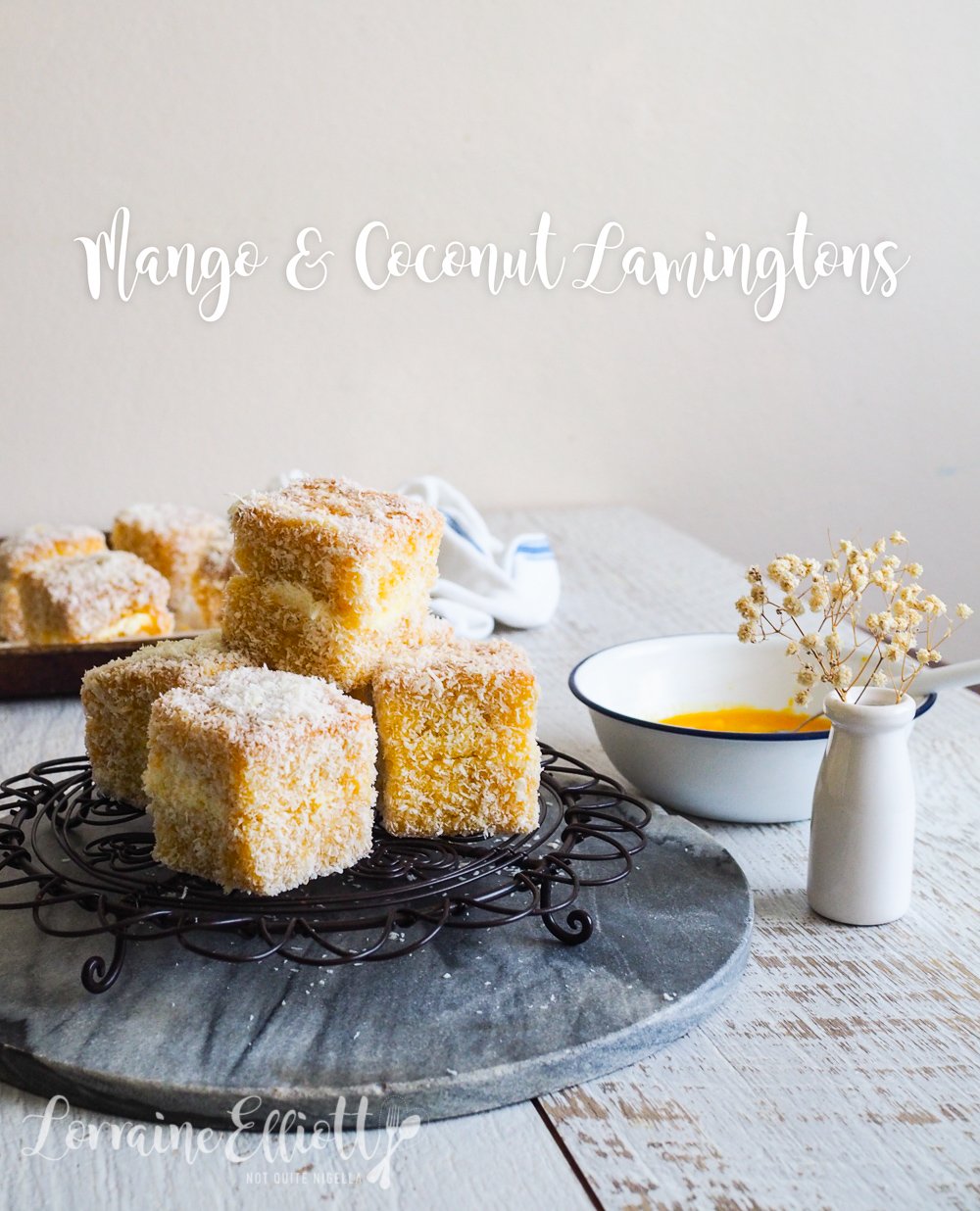 Would you like to try a fruity, seasonal spin on lamington? Mango and coconut are perfect bed partners and this fluffy, cream filled lamington is bursting with tropical flavours! Better still is that the lamington batter is all done in one mixing bowl without the need for creaming or a big mixer!

What I especially loved about these lamingtons is that the mango flavour really shows up in them because nothing disappoints me more when I expect a flavour and I don't get it. I used fresh, ripe mango because they're so abundant at the moment. I also kept the temperature low for baking these lamingtons as I wanted to make sure that the cake was moist. And because I'm a bit obsessed, I also tried rolling these in three different types of coconut: desiccated, shredded and flaked and there was not one type that stood out as being better than the other.

And for those of you outside Australia, a lamington is a cake that we claim as our own. Typically, it's a square of sponge or butter cake, cut into squares and then rolling in a chocolate coating and then coconut. Sometimes it is filled with cream and strawberry jam too. They're said to be named after Lord Lamington of Queensland and invented by his chef French-born Armand Galland who Tahitian born wife provided the link to coconut (not a very common cooking ingredient in early 1900's Australia). It is originally a very Queensland based item as much of the cake's history is based in the state. 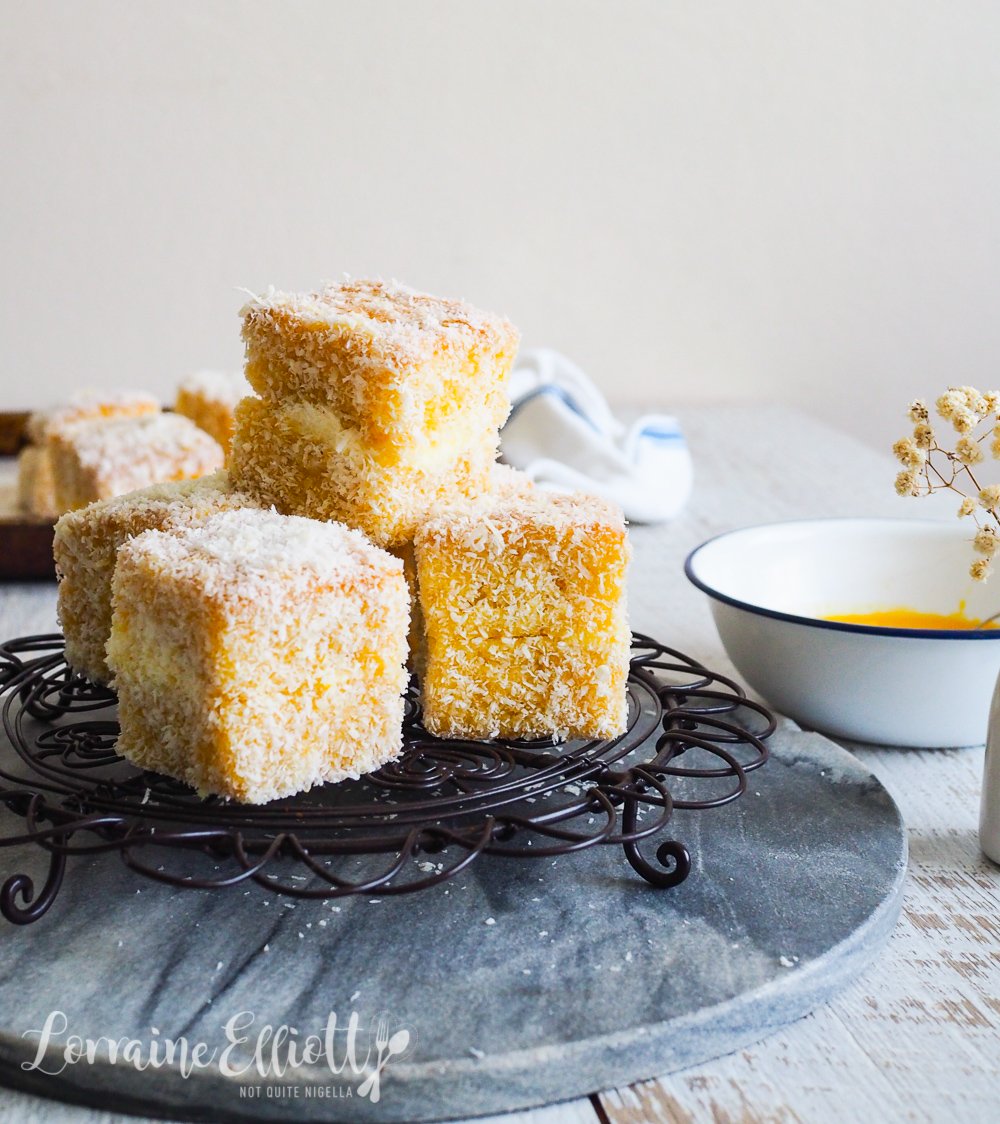 We probably all have memories of eating lamingtons that have sat on the supermarket shelf gradually drying out for weeks. I promise that these lamingtons are the opposite and the cake is made even more moist by the roll in the mango sauce. And when I realised how many this made (enough for a party crowd or a gathering at 15 BIG pieces), I promptly packed these up for Mr NQN to take to work. Apart from a bite I don't need 14 3/4 lamingtons hanging around the house tempting me.

I mentioned Mr NQN's new job didn't I? He can bring Mochi to work with him which is really helpful when I have things to do durin the day that can't involve her. At first she was reluctant to go with him but then a switch within her was flicked. Now, every morning Mochi gets up, shakes her head as if to get ready "I Dream of Jeannie" style and quickly climbs down her set of stairs at the end of the bed and begs to go along to work with him. Even when he puts her back on the bed with me she will climb back down hoping to hitch a ride to his work. You see she gets lots of snacks from his colleagues and that's just about her idea of heaven.

As for his workplace colleagues' feedback about these lamingtons, that came through fast and very complimentary, one man going so far as to send a pic of him with his thumbs up declaring me a culinary genius (very kind but I am sure free cake is the trick to garnering compliments ;) ). As for Mochi, it was not about the cake but about the chicken and cuddles.

So tell me Dear Reader, when is the last time you ate a lamington? And do you give away your baked goods to anyone or do you keep them at home? 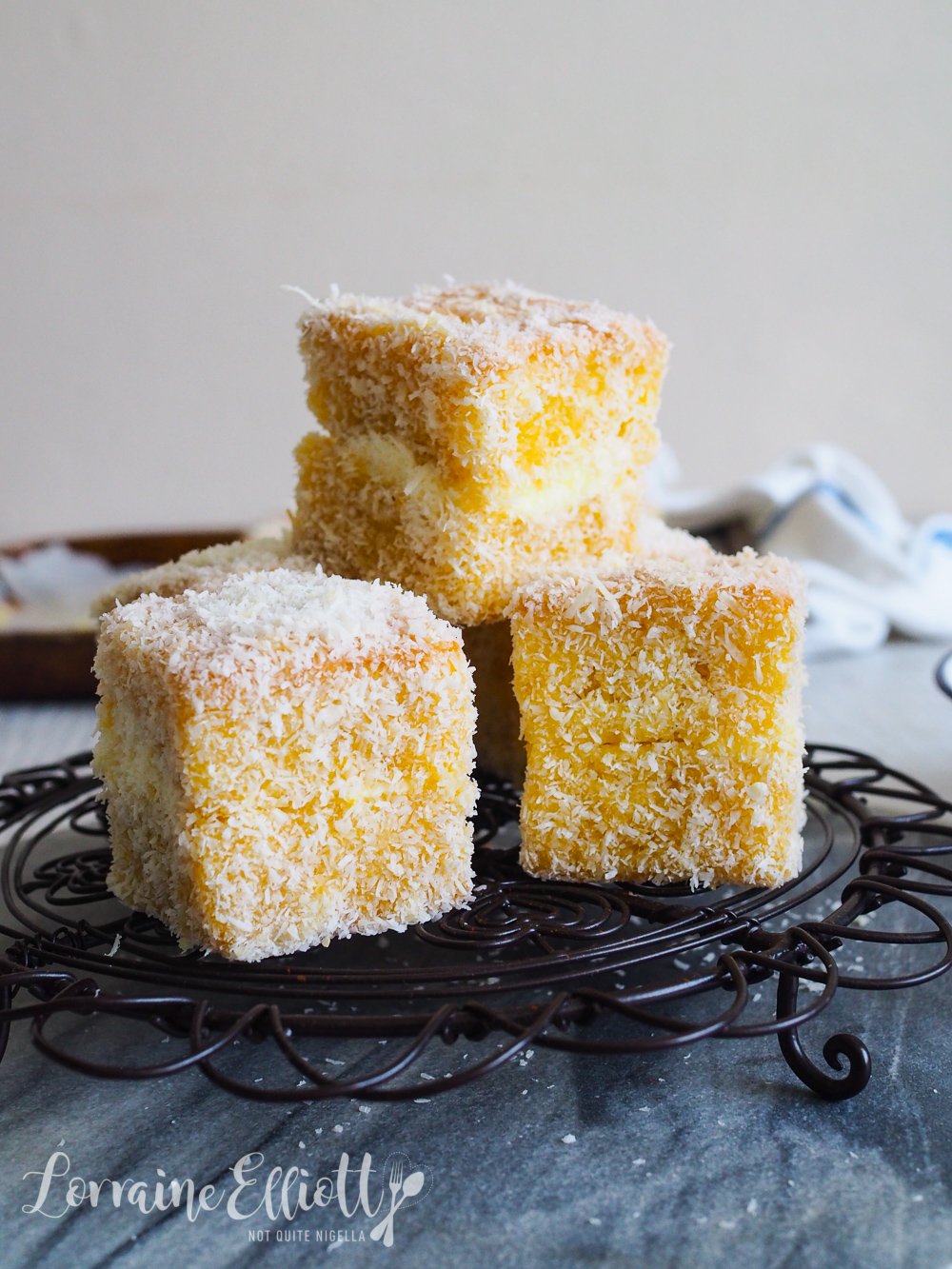 Glaze and to roll

To make cake flour, replace 2 tablespoons of a cup of flour with cornflour/fine cornstarch 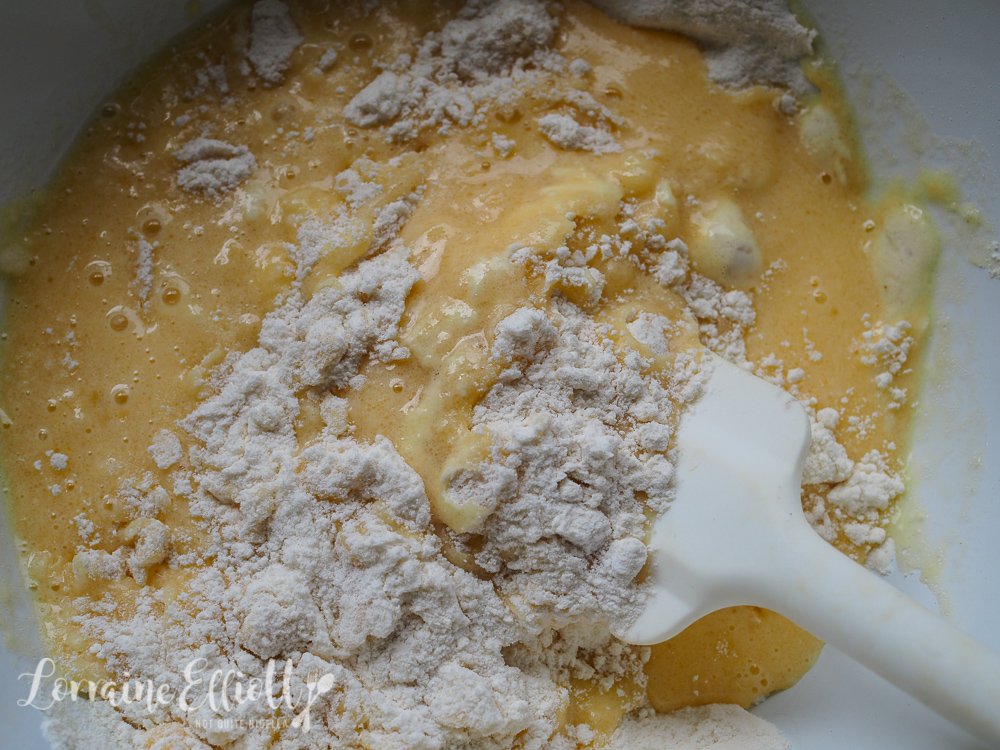 Step 1 - Line a 18x28cm (7.2x11.2inch) tray with parchment and preheat oven to 135C/275F. Whisk the flour, baking powder, bi-carb and salt in a large bowl. In a large jug measure the coconut oil and sugar and whisk in the eggs and coconut milk. Make a well in the flour and mix in the egg mixture making sure not to overmix. 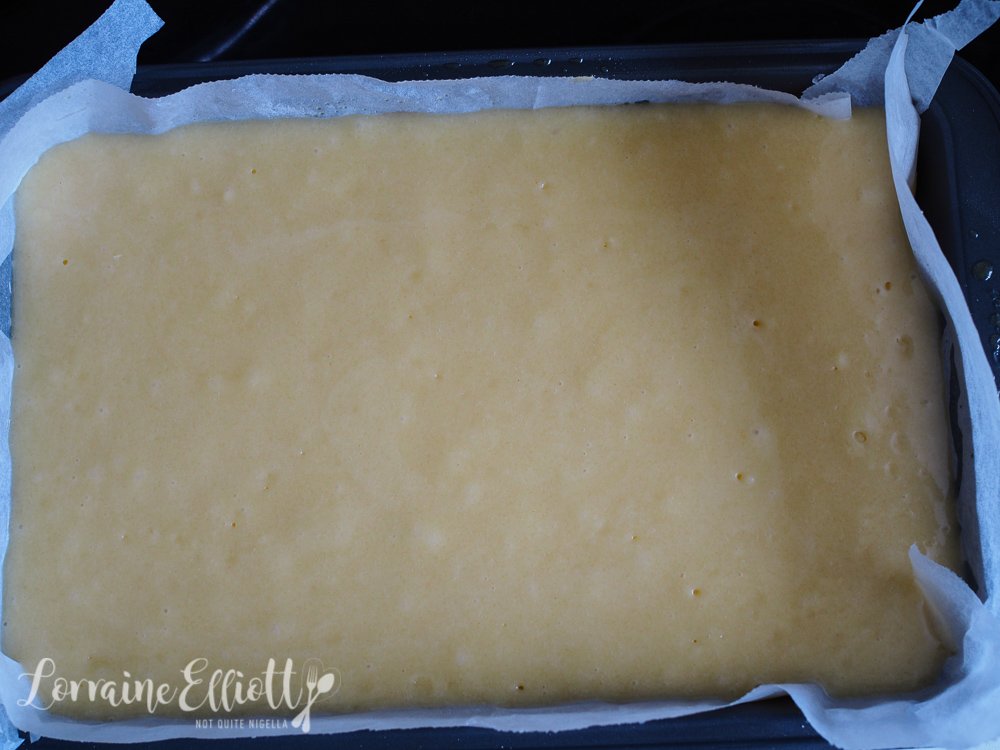 Step 2 - Pour into the prepared tin and make sure to remove any air bubbles by gently tapping the tray on a surface and pricking the bubbles with a toothpick. Bake for 1 hour 30 minutes (yes it's a long time but we want the cake to be as soft as possible) or until a skewer inserted comes out clean. Cool in the tin for 5 minutes and then remove the cake and cool completely on a wire rack. Trim off any of the hard edges and cut in half horizontally and then into squares. 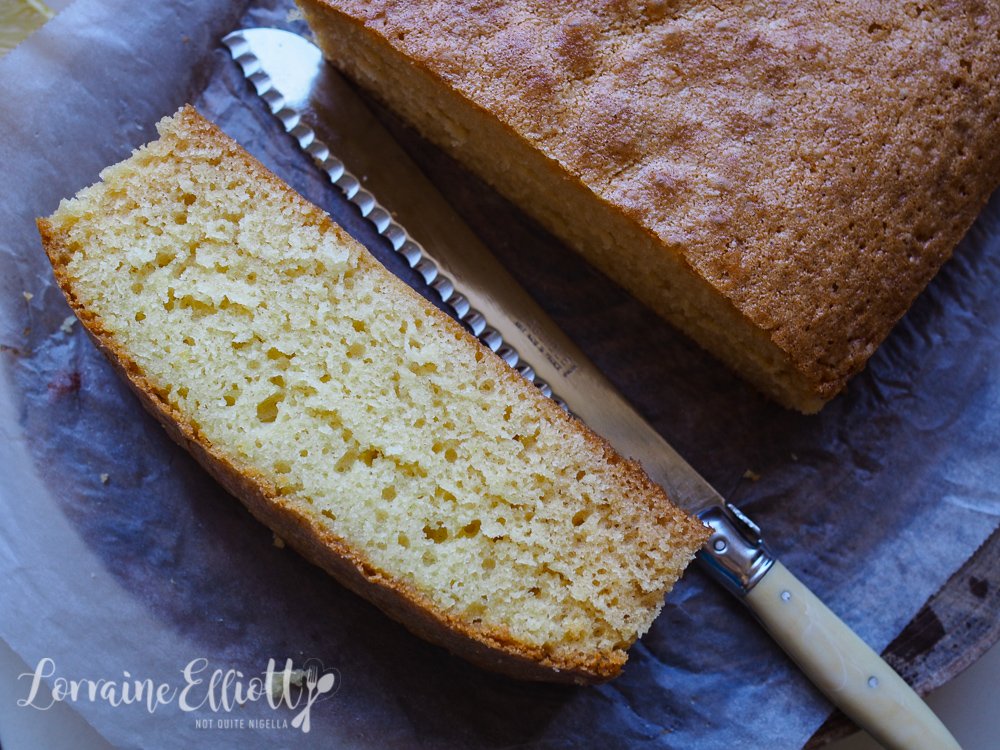 Step 3 - Place the icing sugar in a food processor (can you tell I hate sifting it?) to remove any lumps and then add the mango puree, lemon juice and vanilla. Place the water in a microwave proof bowl and sprinkle gelatine powder over it. Microwave for 15 second until it becomes a clearish liquid and then add to the mango mixture and stir well. Whip the cream until stiff (I don't add any sugar to it as the mango sauce and cake are sweet but add a little vanilla sugar if you want). Spread the coconut out in a shallow dish and then line a tray with parchment. 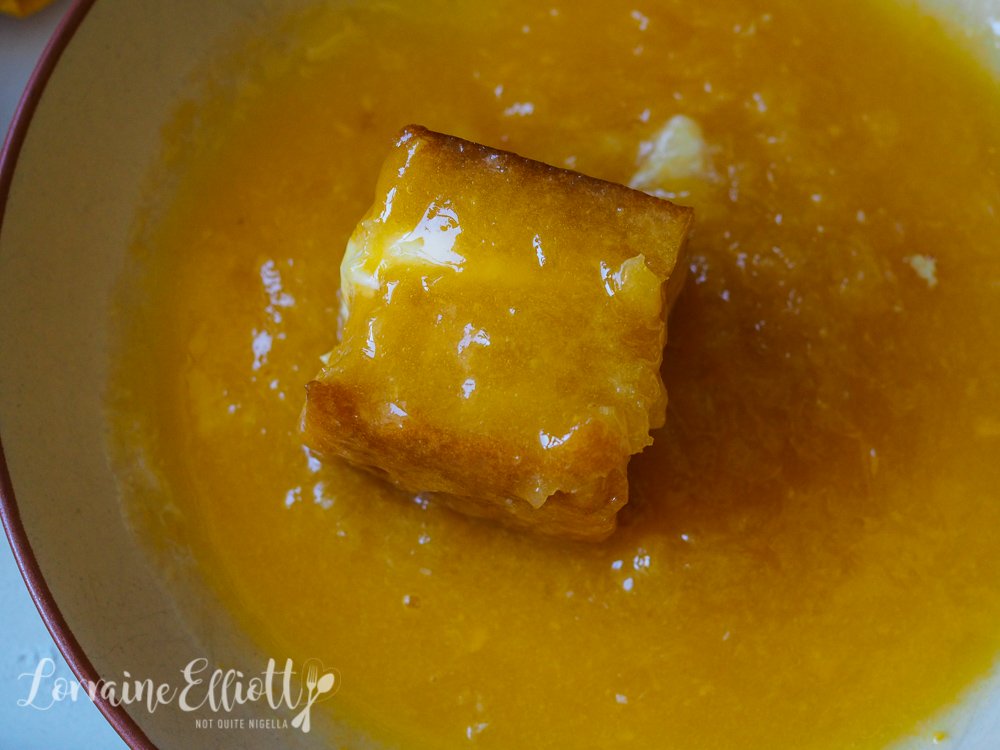 Step 4 - Spread the cream between the lamington squares and then dip each square in the mango sauce and then the coconut resting them on the parchment lined tray. These need to be kept in an airtight container in the fridge. 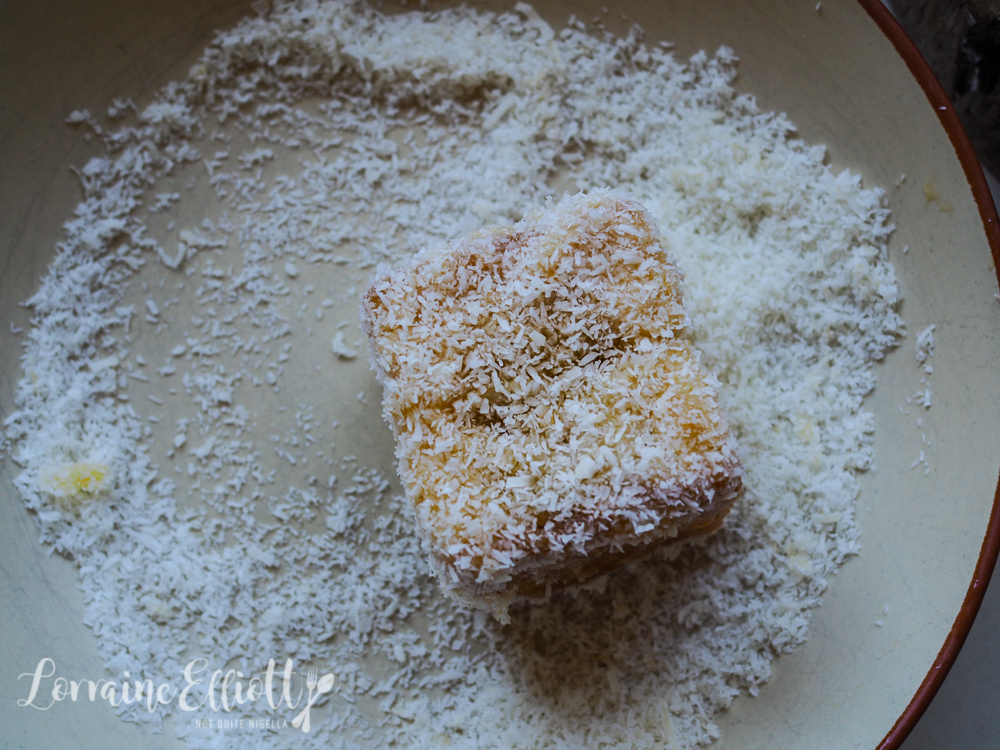 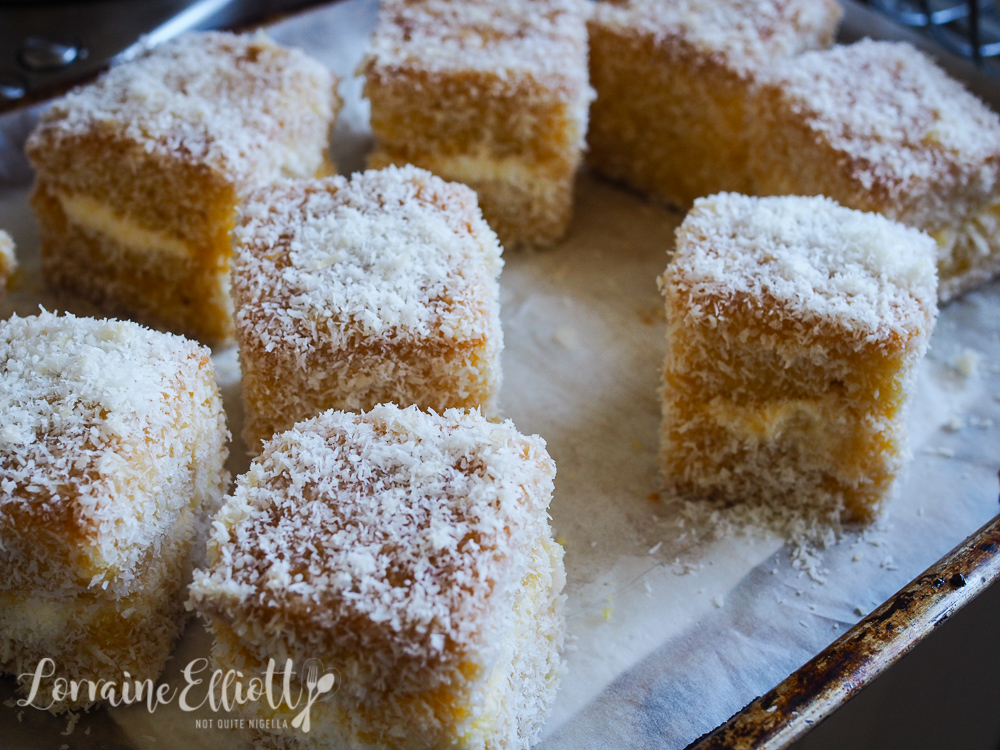