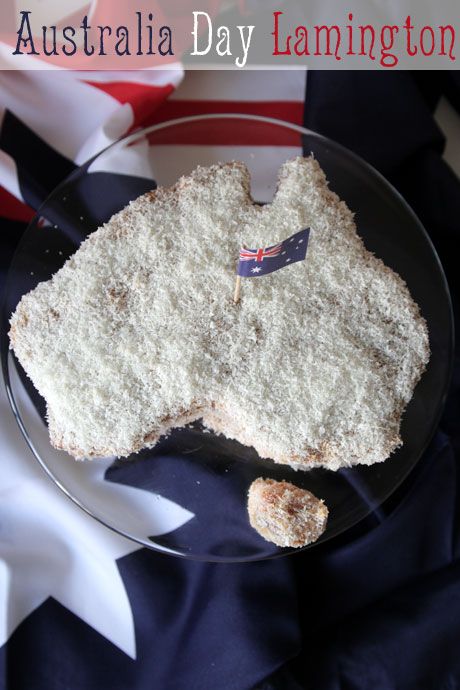 So Dear Readers, who caught some of the Oprah Australia special on the past few nights? What did you think of it? Did you love it or did you not? I myself am a huge Oprah fan. You can say what you want about her but I adore her positivity and her ability to use her influence for good. I was one that joined in the queue hoping to get tickets to the show but sadly the ballot came and went and there were no tickets. I would have to content myself watching it from home. I tuned in curious to see how Australia would be portrayed. I love hearing about how other people perceive us (do people still think we ride kangaroos to work and keep pet koalas?).

I watched all four episodes with Mr NQN next to me for a couple of them pretending to be asleep but with one eye on the tv and ended up feeling a massive sense of pride at how beautifully Australia was shown. It was of course meant for a different audience, an overseas audience and a predominantly American audience.  Things that we Australians take for granted are in fact wondrous to others such as the beaches. I was surprised to hear some negative responses to her trip-I suppose that's going to happen but one thing that no-one could complain about was her thoughtful remarks about the Queensland and Victorian floods that saw as a result a reported $20 million in donations. As a frequent, recent visitor to both of these states, I thought that was wonderful. 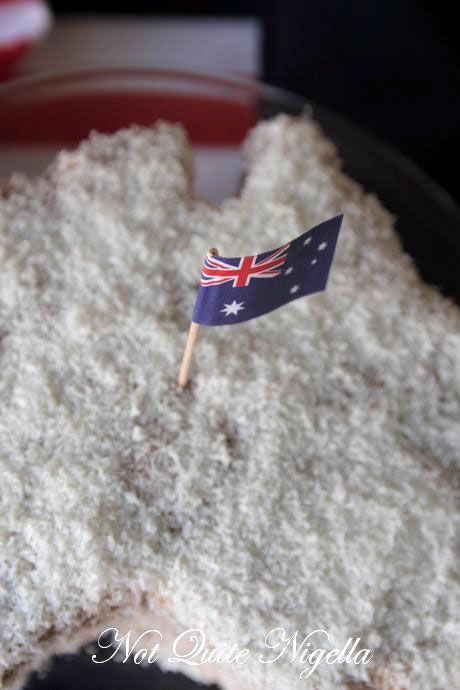 This cake can also be achieved easily in a smaller form using an Australia shaped cookie cutter but in the absence of one I decided to do a big cake to share with everyone. The cake itself is a lovely, light vanilla cake like a madeira cake from yesteryear and rolling it in some dulce de leche infused cream seemed like the easiest way to impart the requisite flavour of caramel to the cake. The cake is I have to admit fabulously good with the soft, fresh vanilla cake glazed with the rich caramel and sprinkled in coconut.

Sentimentally, my favourite bit of the Oprah Australia shows was where they sang what should be the National Anthem "I Still Call Australia Home", that gorgeous song that would make even the most hardened cynic rethink their armour. Yes it's a sentimental song but it's beautiful too!

So tell me Dear Readers, what did you think of the Oprah Australia special? And what will you be doing this Australia Day?

P.S. You can donate here at the Queensland Government website, the RSPCA or you can volunteer to help with the cleanup here. And of course support the farmers by buying local produce, even if it's a little less pristine and perfect than before. 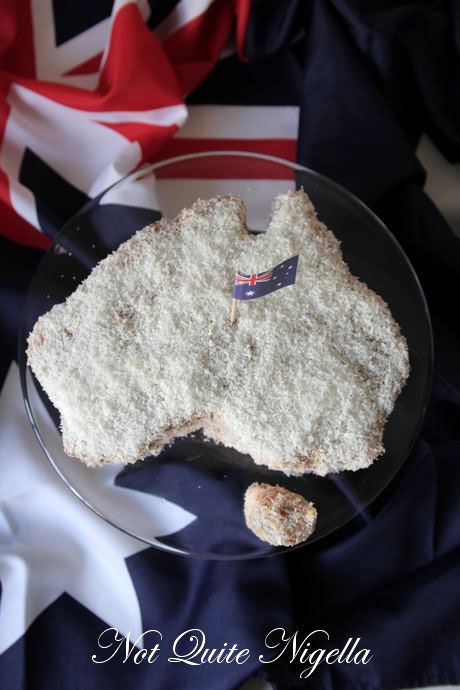 You will also need to print out a map of Australia. I found one here which was set in the right orientation for printing and didn't need any adjustments.

Step 1 - Line a 20x20cm (8x8 inch) square of round tin with baking parchment. Preheat oven to 170C/340F. Cream the butter and sugar in the bowl of an electric mixer fitted with a paddle attachment. Beat for about 3 minutes until the mixture becomes pale. Sift the flour into a separate bowl. 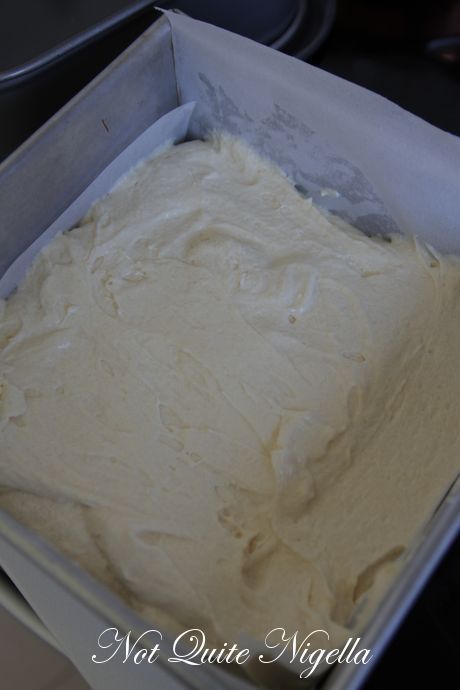 Step 2 - Place soured milk in a  jug and add eggs and vanilla and whisk until combined. While the beater is mixing at the lowest speed, in three alternating lots add the eggy milk and then the flour and mix until combined. Pour into the lined tin and bake for 1 hour until a skewer inserted comes out clean. Don't worry about any cracks, it will sink down a little and besides which we're going to flip it over so that the surface is totally smooth! 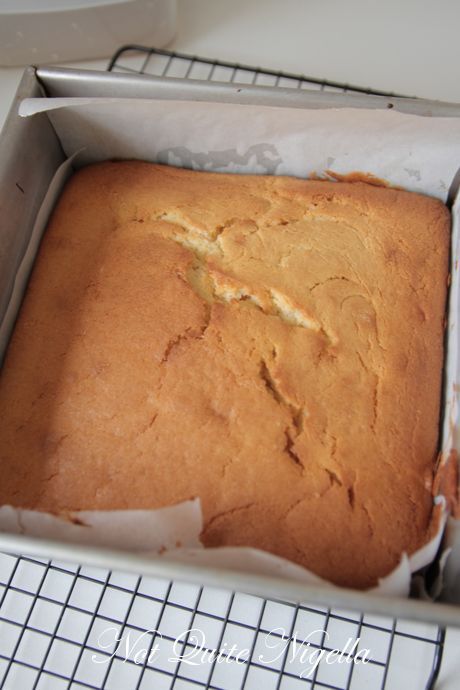 The baked cake which you will flip over...

Step 3 - In a heavy based saucepan heat the cream and the dulce de leche or caramel top 'n fill until the caramel is melted and the mixture is smooth. Strain through a sieve. In a small bowl soak the gelatine leaf in cold water for 5 minutes and squeeze it dry and then add it to the caramel mixture while it is still warm. Stir well. 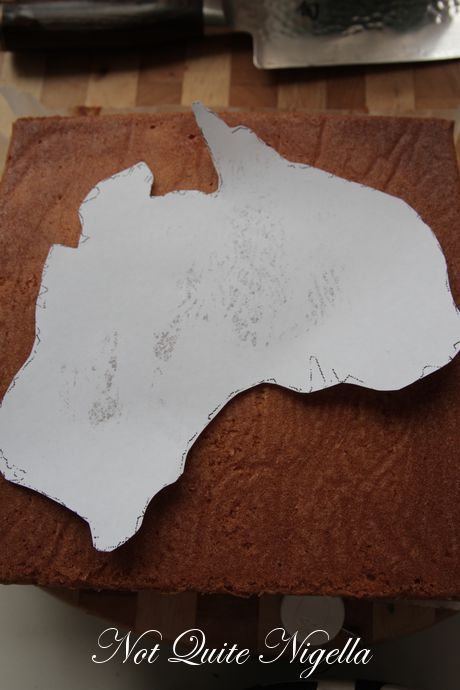 Step 4 - Take the print out of the map of Australia and trim it around the edges-I didn't do all the nooks and crannies because I didn't think that I would able to cut it out. Place the trimmed map on top of the cake. I found that I could trace it with about 5mm more space (I wanted to use up as much cake as possible) so I trimmed it with a slight border. Also don't forget to cut out Tasmania! 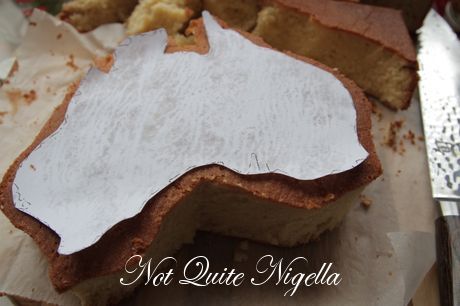 Step 5 - If you want to, you can split the cake in half horizontally and fill it with whipped vanilla cream (1 cup cream whipped with 1 teaspoon vanilla bean paste). 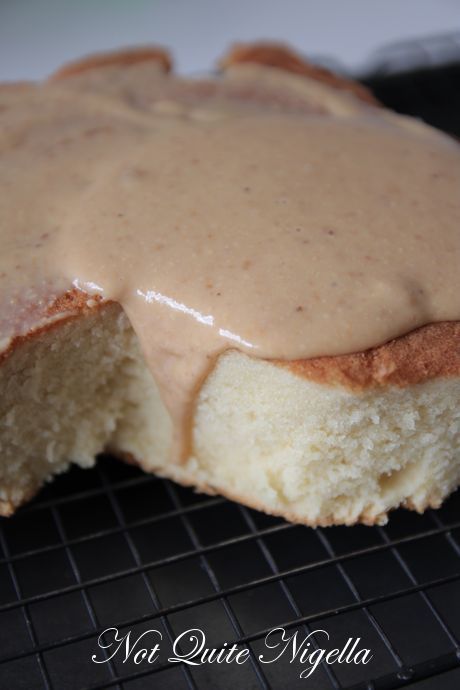 Step 7 - Sprinkle with the desiccated coconut and press some against the sides of the cake. 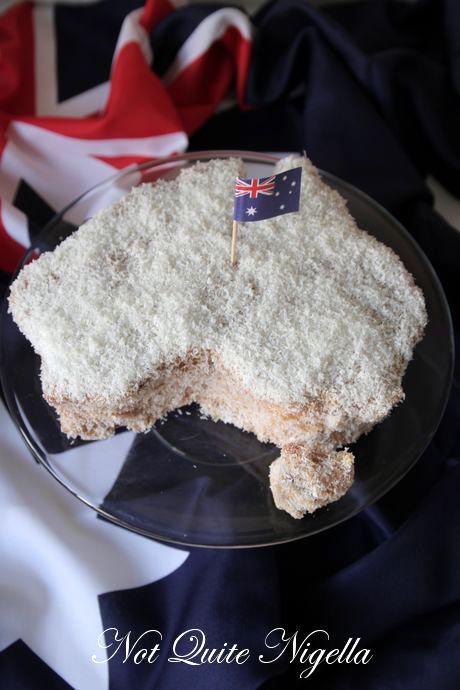