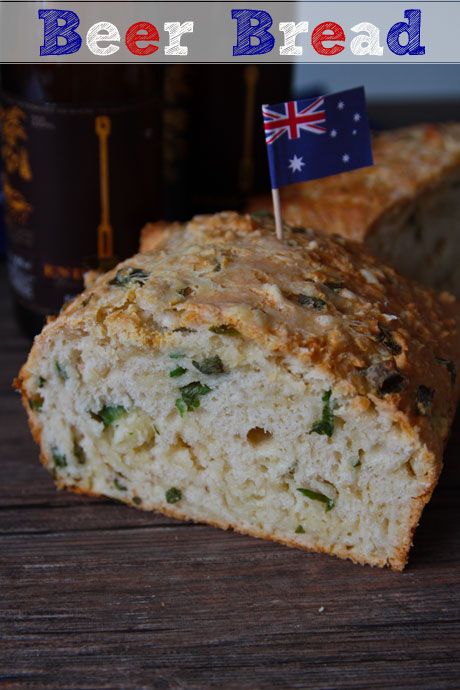 "Errr okaaay....later" he said  looking at me with a measure of suspicion. I'm sure he wondered how a perfectly lovely weekend day had suddenly turned hideous.

About  twenty minutes later, I heard some expletives from the lounge room. "&*(&(&(!!" he yelled and then repeated it for good measure. "I've put out my neck!" he said woundedly.

"How? You were just sitting there on the couch playing on your phone!" I asked.

"I dunno, I just did" he said. And with that he limped off to the bedroom to sleep off the rest of the day.

Now, I'm not accusing him of faking it, I think that he had really hurt himself but I couldn't help noting the coincidence in timing. Our plans to do the grocery shopping were aborted and I spent the rest of the day cleaning. And I was bored. 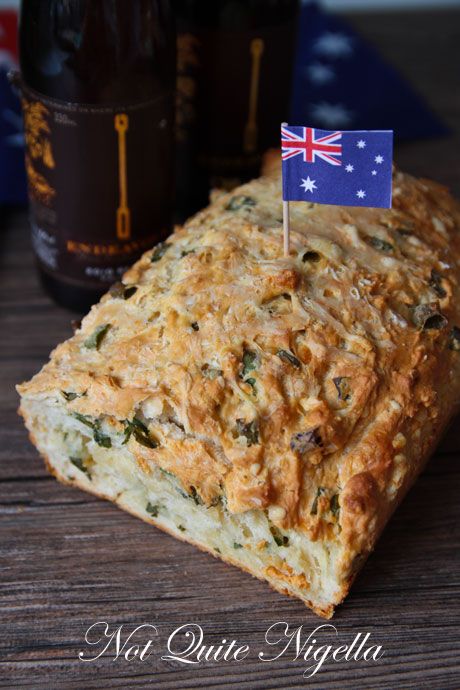 I decided that the weather was perfect for a spot of baking. If you remember last Saturday in Sydney, it was a summer day that was little cooler than usual so the oven heat wouldn't be too much of an intrusion. Alas, as it was grocery shopping day, our fridge and pantry supplies were running low and I could only make one item that sat on my "to cook" list. One that I found on Jenny's blog Practically Perfect.

It fit the brief exactly. I didn't have any bread so I needed to make some for lunch. I had flour, salt, beer, cheese and green onions and it was a cinch as it didn't require any kneading or proving at all. Just a stir of everything in a bowl and a stint in the oven and then we had our perfect bread for your Australian male specimen.

The thing that will strike you when mixing this all together is how just adding the beer to the flour gives it that instant yeasted bread smell-naturally of course because of the yeast in the beer. You could make this plain as Jenny did but her suggestion of cheese and onion bread spoke to me as I love cheese and onion chips. The bread is so ridiculously simple  and it's more like a damper or scone than a regular bread. Flavour-wise it has a just enough hops flavour to it for beer lovers but not too much to make beer non lovers recoil. It was also a hit with the patient too.

I told Mr NQN that I had written about the coincidence in timing for his injury. After some initial protest, a smile spread across his face and he laughed and said "Yeah I know."

So tell me Dear Reader, does your other half or flat mate ever try to get out of housework? And do you like the flavour of beer in cooking? 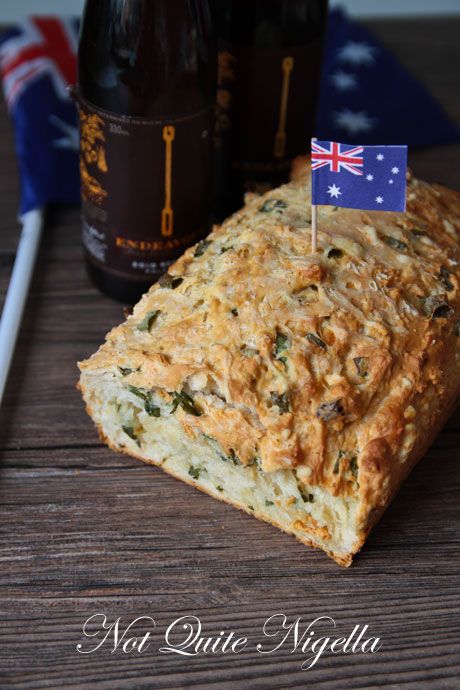 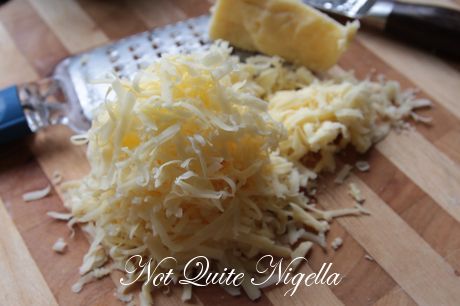 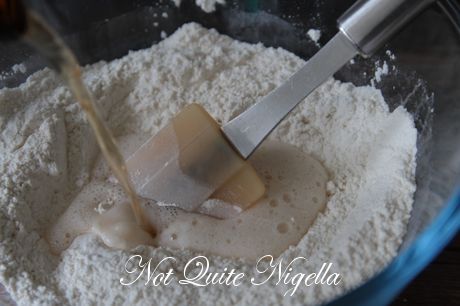 Pouring beer with one hand and taking a photo with another isn't advised! ;) 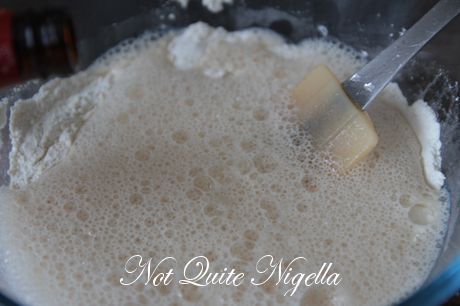 Step 1 - Preheat the oven to 190C/375F. Line a 9 inch loaf tin (or you can live life on the edge and just spray it with non stick oil spray but the cheese does stick a little). Place flour and salt in a large bowl and add the beer and stir until combined. It will start to look just like a regular bread dough. Add the green onions and cheese and stir to distribute. I find a silicon spatula helps with this mix. 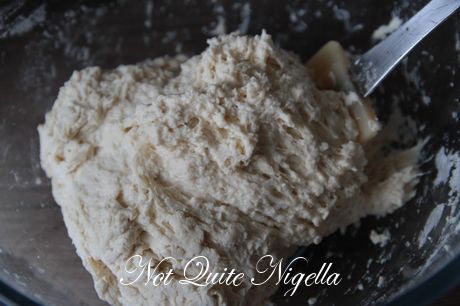 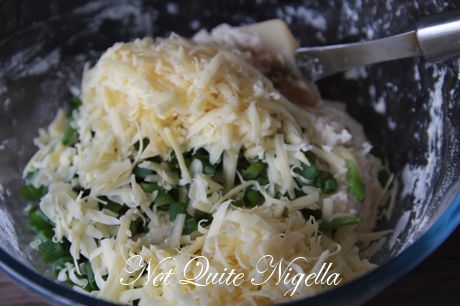 Stir through the good stuff 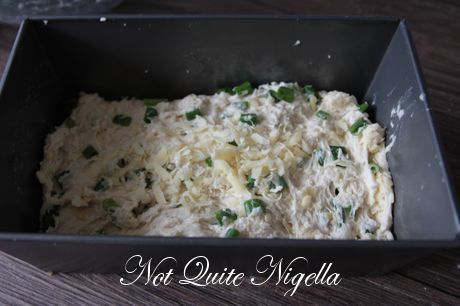 Then spread out in a loaf tin-it will rise (I didn't line mine, only sprayed it with oil spray)

Step 2 - Place the batter in the loaf tin and bake for 45-50 minutes. Cool in the tin for 5 minutes and then remove from tin, slice and serve warm with good butter. And a tip: to slice, turn this loaf upside down as the top is quite crusty, and start cutting from the bottom. 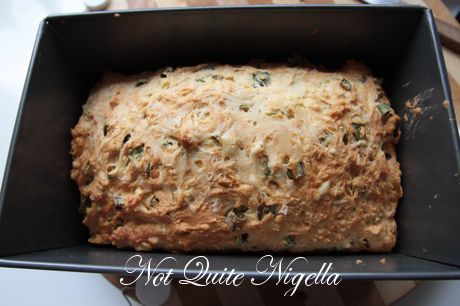 This smells amazing baking in the oven. Get ready for a surly man crowd to gather! 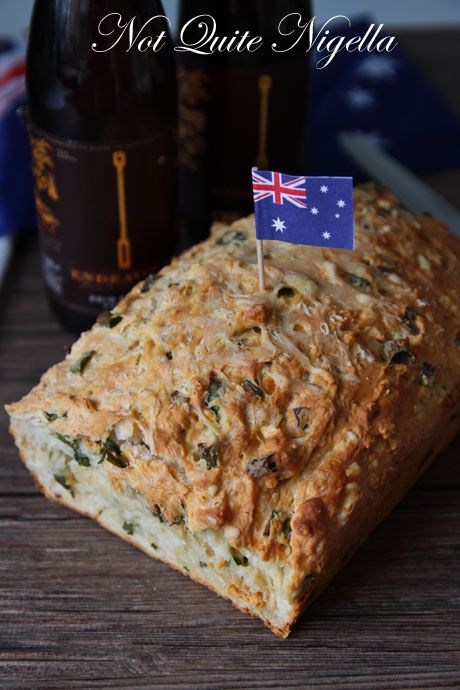