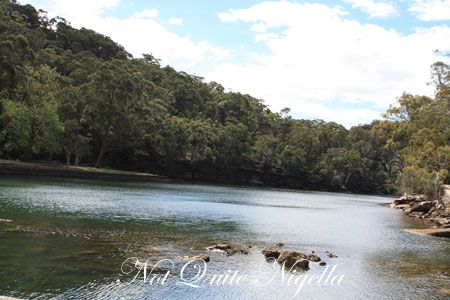 I have been friends with my dear friend Queen Viv for almost 20 years. And in that time we've had some wonderful adventures most of them to do with the fact that she truly attracts some unusual circumstances. So when she asked me if I'd like to come on a road trip to Wollongong I answered an enthusiastic "Yes" and then thought "Oh dear: we've both got no road sense and no GPS. Would we end up in Perth?" Then the image of Thelma and Louise flashed through my worried mind. 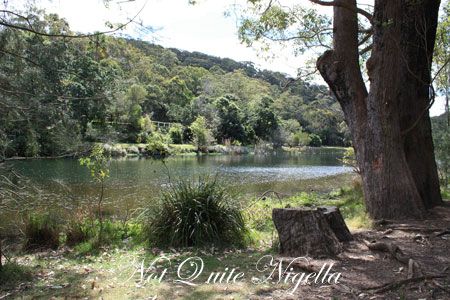 Wollongong is one of those areas which is great for a day trip as it's only an hour and twenty minutes away from Sydney by car but the beach side atmosphere and laid back lifestyle means that you actually feel like you've gotten away from the "big smoke". We drive through the Royal National park to take the scenic drive down to Wollongong. It's full of flowers this spring and Queen Viv, a keen gardener points out the native flannel flowers and huge Gymea Lilies. The drive is scenic and she also points out a nice place to stop and have an ice cream on the way. 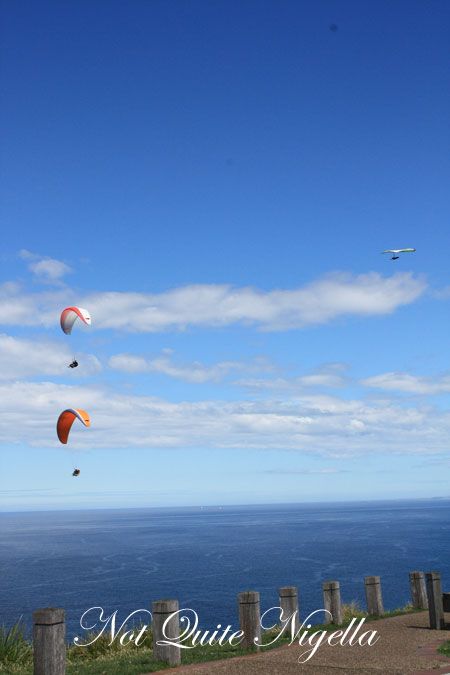 Driving south we emerge out of the National Park to see one of the most breathtaking views. It pure Californian beauty with sweeping cliffs and blue water and little cottages on the cliff's edge below. There are cars that have also stopped just to look at the view. There are also gliders a plenty here suspended in mid air only metres away. 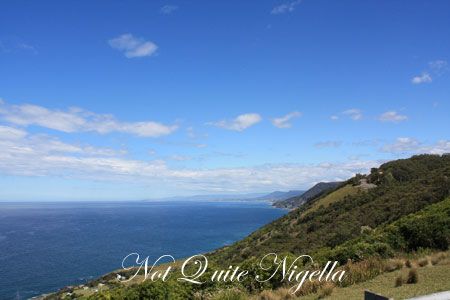 We stop at Ruby's Kitchen in Stanwell Park on the way. Queen Viv points out that this is near where Jane Campion wrote Sweetie in a blue fibro house. Ruby's Kitchen Cafe used to be called Ruby's on the Dust which was a popular surfers hangout where they'd buy lentil burgers after a surf. Indeed there's a group of surfers with surfboards standing outside as we pull up. 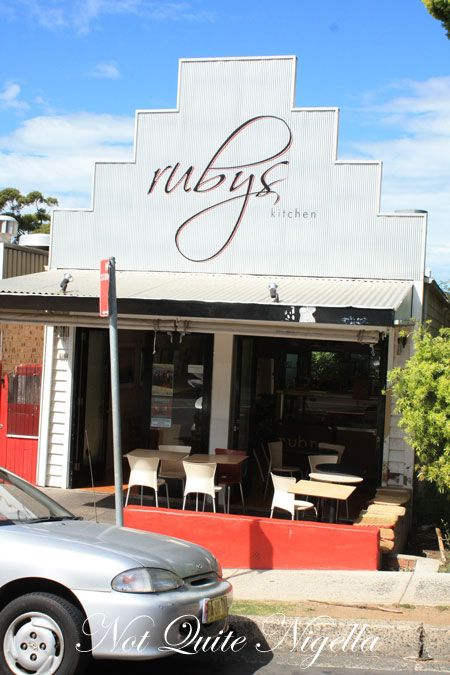 We order a Mezze plate to share as it's lunchtime but when it comes out we're a little floored at the size. It's rather enormous (I guess surfer size) and there are two large wedges of vegetable frittata, three types of dip (beetroot, hummous and olive tapenade), some toasted Turkish bread and a rocket, pumpkin and feta salad. 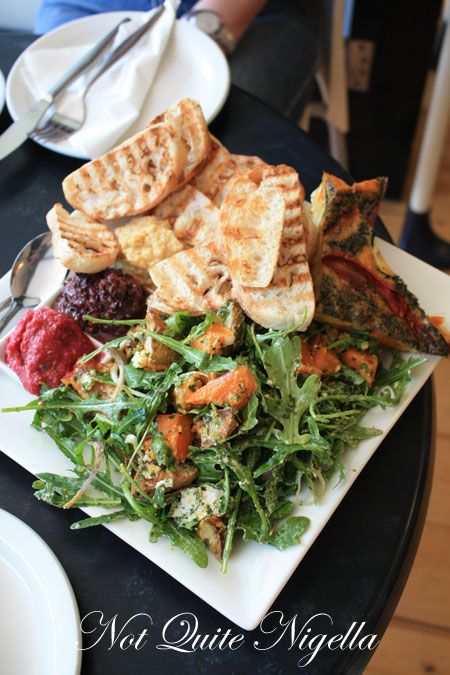 We dig into the dips-they're all homemade and the beetroot is my favourite with the beetroot missing that earthy flavour which I don't particularly like. The hummous is fresh and lemony and the olive tapenade contains other goodies which Queen Viv picks up on like sun dried tomatoes. We then start on the salad which is my favourite item. Perfectly dressed in pesto, with generous chunks of creamy Danish feta and roasted pumpkin and potato I eat greedily of this (although the potatoes were too dry roasted for me). The fritatta is good although we don't have any chance of finishing this so they wrap this up for us and we're on our way again 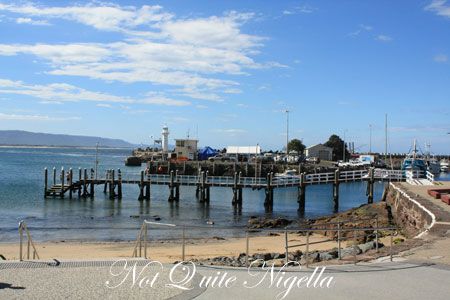 We set off again down the road and pass antique stores and after a while arrive at Wollongong. She has fond memories of buying a dozen oysters and sipping a mini bottle of bubbles for a mere $14 but when we arrive we see that it has indeed become a slicker looking place. 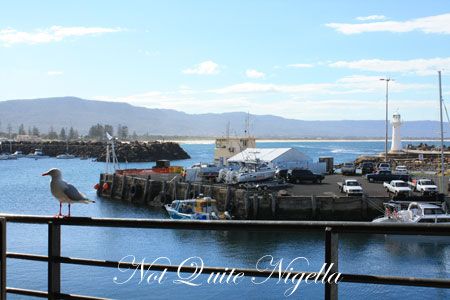 Gone are the specials and in their place is a curious place. It looks expensive enough, with reasonably expensive meals to match but it's order and pay at the counter and collect your meals at the counter and only plastic cups are given. If you want a glass you can buy one for $3. It's a rocky start to our lunchtime relationship being told all of these things and Queen Viv and I sit back and wonder what sort of place we've happened upon. A pub with restaurant aspirations and prices? I head back to the table with our plastic cups and drinks. 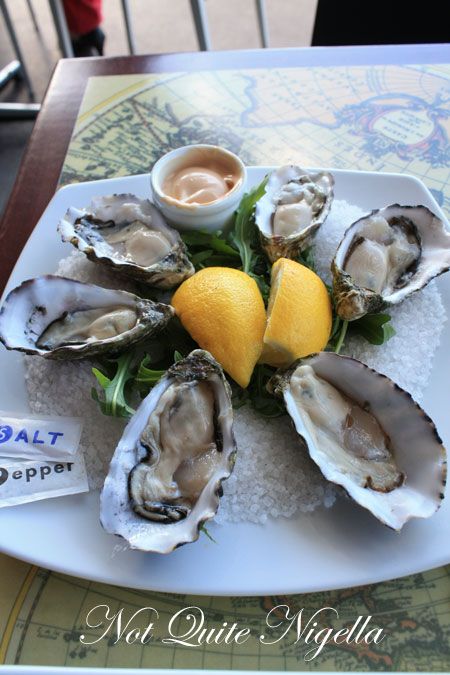 After about 5 minutes our buzzer vibrates on the table and I go in to collect the food. We've ordered a half dozen oysters, a bottle of bubbles (as that is what Queen Viv has been craving) and a Mezze plate (seems to be the theme of the day but I wanted to try as much as possible). The oysters are plump Pacifics and even with my doubt regarding the plastic self servicing of the plate, they are indeed very good. 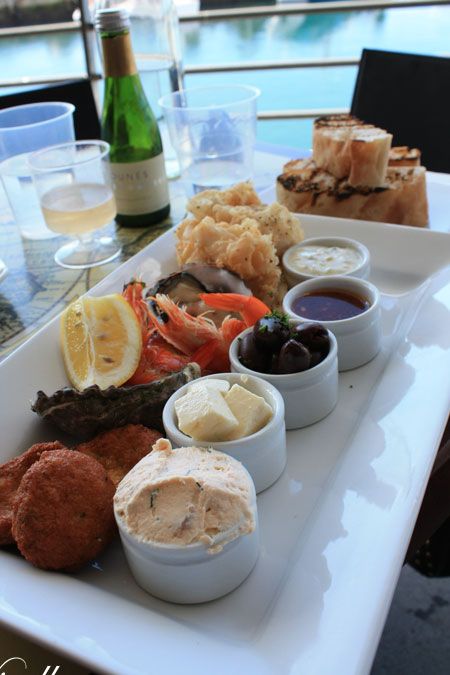 The salt and pepper calamari is also fairly tender and the fish cakes are delicious and aromatic. There are two sauces, a sweet chili and curiously a yogurt sauce-the yogurt would be better replaced with a tartare for the salt and pepper calamari as the yogurt sauce doesn't really go with anything. The olives are salty black shiny ones and the feta cubes are a bit dry so I leave those. The bread slices are thick and white and very, very filling and along with the salmon dip are good fillers if you're hungry but I've eaten too much already so I leave this behind. After a while staring at the water view, we do a bit of shopping in Wollongong (our main reason for the trip was to visit a shoe store which we learned has now closed). 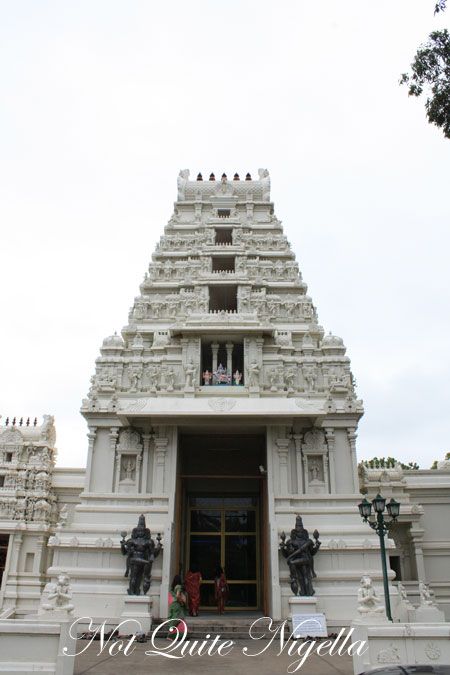 Some weeks later, Mr NQN and I return during the Christmas holidays to try two places that I was intrigued by - the Indian Sri Venkateswara Temple for some vegetarian Indian food and the Otford Apple Pie shop. We pull up to the temple having no idea what to expect but were relieved when we saw large numbers of Indian families gathered outside. In the main outdoor building, there are tables and chairs and a long queue of people. The menu on the wall shows various dishes on offer, all vegetarian and at fantastically low prices. We choose a selection of them all for the princely sum of $20.50 and take our number while our food is cooked. All around us Indian women in gorgeous saris and their husbands tend to their excited children. We're the only non Indian people in the crowd but everyone is friendly. 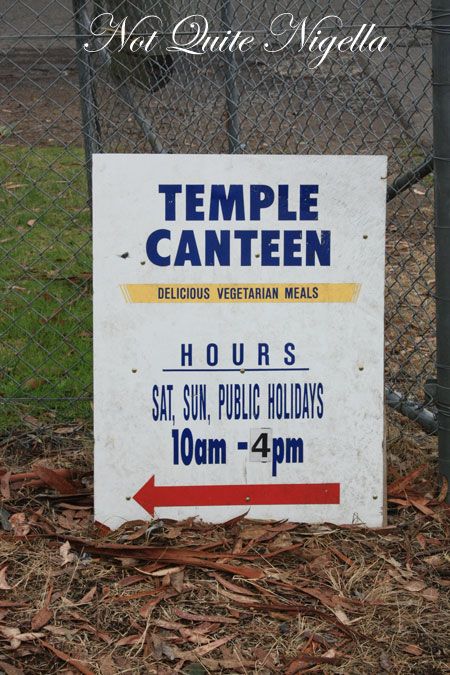 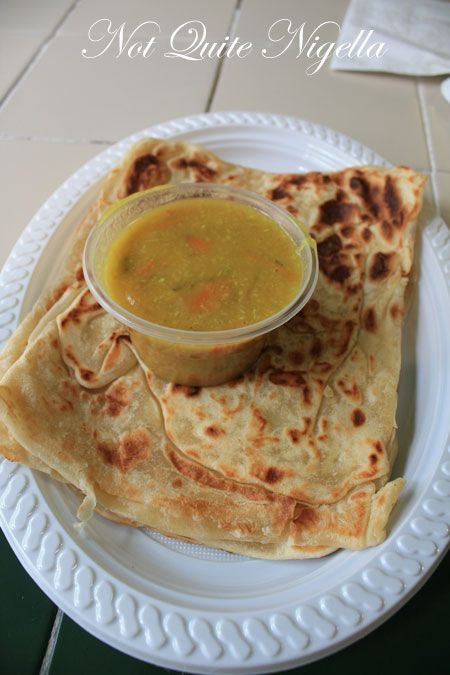 Parotta or parathas are a south Indian food similar to Malaysian rotis but less buttery. They're thicker and sturdier and come with a kurma, which is a liquidey curry. They're best eaten hot as when they cool they lose their fluffiness. 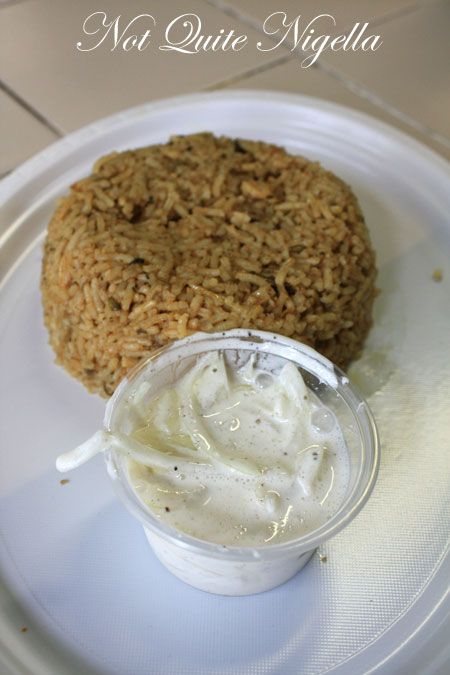 I adore the biryani which is flavoursome with large chunks of potatoes interspersed among the perfectly seasoned rice. The accompanying raita made of yogurt and sliced white onions is perfect to give it that bit of moisture and it I'm happy to discover that it doesn't hold back on the spice. 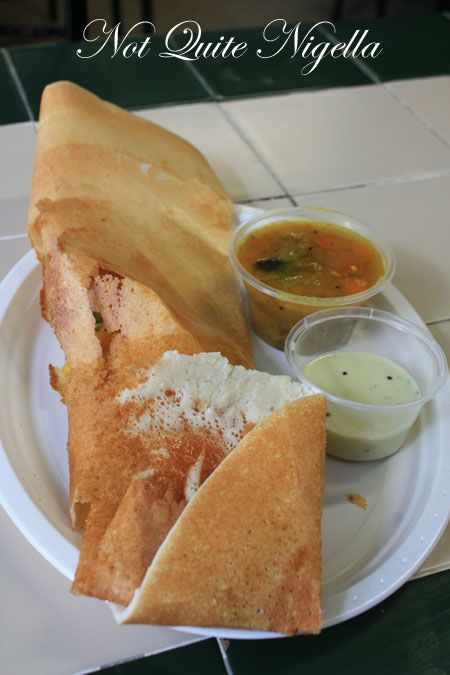 The item that took the longest to make was worth the wait. I don't mind dosas but have never really been in love with them but this is excellent. The crispy shell is partway filled with some gorgeously spiced curry and it comes with some other accompaniments which is a tangy curry sauce and a runny yogurt heady in aniseed and other spices. 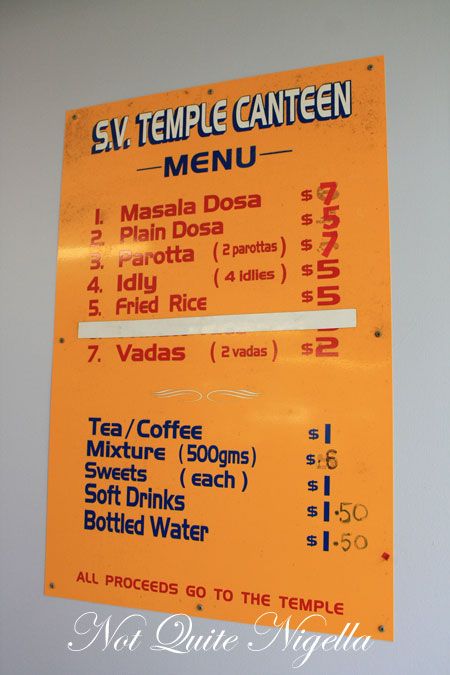 The queue is seemingly neverending so we forego a cup of Masala Tea ($2) and leave but not without first taking a look in the temple. Photographs are of course not permitted inside the temple but it's interesting as I see the deities have been given bottles of milk as offerings. 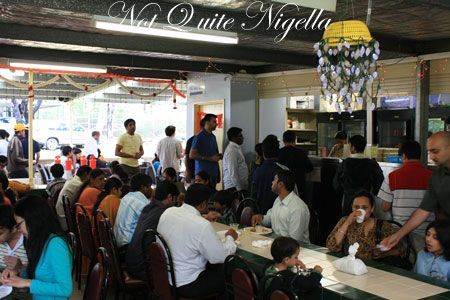 We drive towards Sydney and visit the Otford Apple Pie Shop or the Otford Pantry which I passed before with Queen Viv. It's a popular spot and open only on weekends. Two gorgeous King Charles puppy dogs come out from the back to greet us as we walk in. There is cute booth seating and every booth but one is full. One is slightly more full than the other though with a Blue Tongue Lizard taking up residence in the booth next to us. I didn't realise he was there until after I had started eating the Apple Pie so I eat with haste. 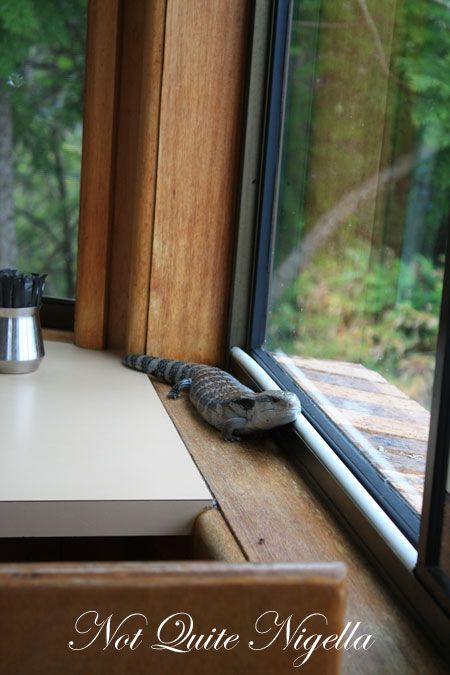 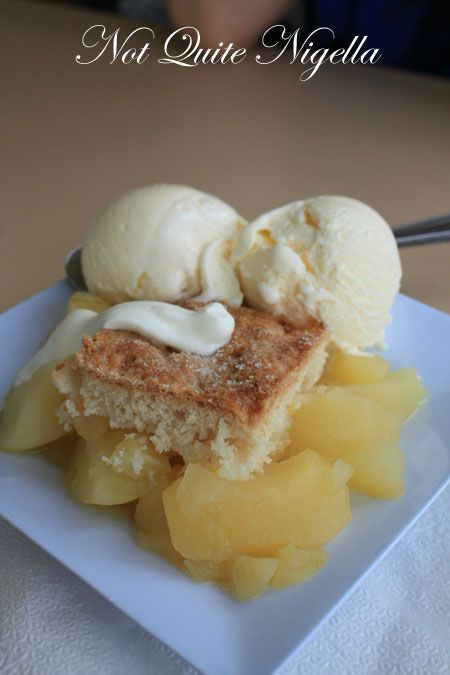 When they set down the apple pie I look at it a little confused. It's more like a cobbler topping set amongst apple pieces. The pieces are tender and chunky and not overly sweet and the cobbler type of topping is less buttery than a cobbler and more scone-like. It's served with 2 generous scoops of Vanilla (Streets Blue Ribbon-yum!) ice cream and altogether it's quite good although not quite the apple pie I had envisaged. 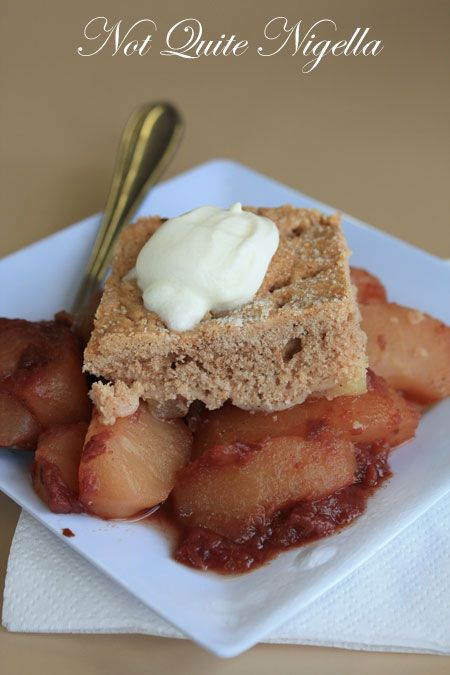 The topping on this is scented with cinnamon and reminds me of a wholemeal cinnamon scone. I preferred the apple pie out of the two and the plum in this is mostly liquidey throughout the apple chunks. 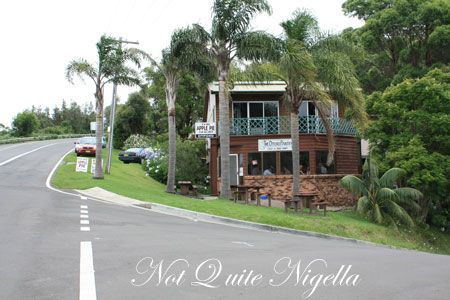 Saying goodbye to our four legged friends, both canine and reptilian, we head back to the big smoke. 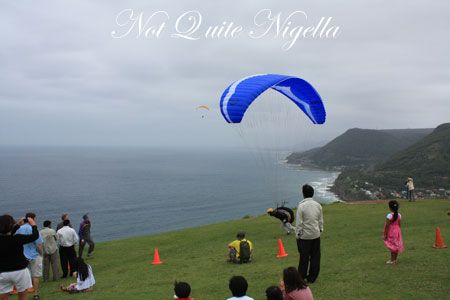 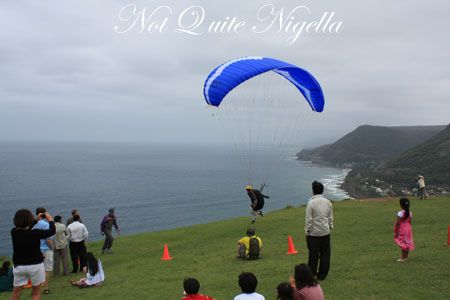 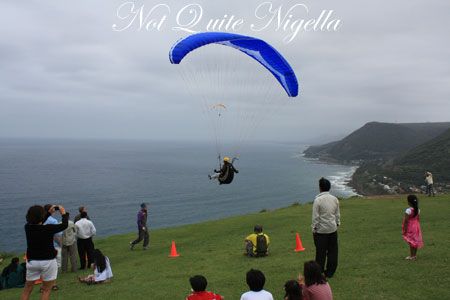 So tell me Dear Reader, which is your favourite place to take a drive to?