It's a steamy Thursday night in Sydney and the Sex and the City discussion pops up. "As everyone gets older, they end up wanting to become Samantha. Essentially we work our way through these female archetypes until we all become cougars" The Second Wife says. There are four of us girls having dinner one night in Surry Hills and indeed it does feel a bit Sex and the City but with some of us wearing thongs having punished our feet all day in high heels (oh would Carrie approve?). We choose a SATC personality for the evening and The Second Wife confesses to feeling a bit Samantha, Tess claims Miranda quickly and Naomi takes Charlotte.  I'm Carrie but hopefully less annoying and self centered (hopefully!). 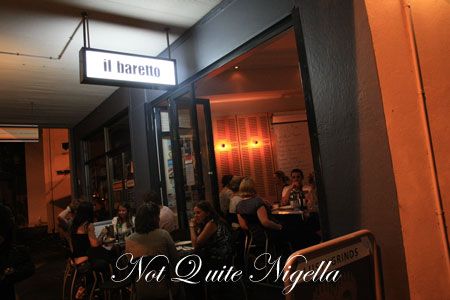 We're ensconced in Fico, a very dark, very subtly signposted bar where people that aspire to eat at Il Baretto huddle over glasses of wine and flirt amongst the flatteringly dark lights. We nibble on some baby calamari fritti and some chicken and mushrooms on skewers but it's too dark to photograph. "Charlotte" has ordered these because when you walk into Il Baretto at 7:30pm asking for a table, you know you may be waiting for some time. Thankfully her phone rings after a short time and they tell her that there was a cancellation and that a table is ready if we leave now. We take our barely touched bottle of mineral water with us and they don't bat an eyelid - Fico and Il Baretto are owned by the same people. 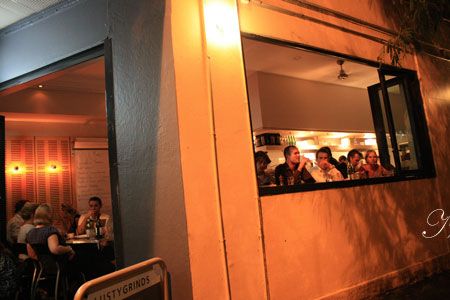 We take the short walk to Il Baretto and they're getting the tables ready. Space is a premium here and we look on in horror at a table clearly for two being set for four diners and we worry that it's our table. There's a bar style section at the front side where diners can gaze out towards the street rather than at each other. Thankfully we get a table out towards the back where a breeze blows through on this hot Summer's night. 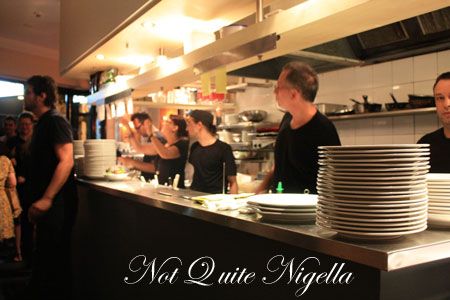 "Charlotte" and "Miranda" battle each for the attention of the waiter but true to form, he is busy flirting with The Second Wife aka Samantha. We have to choose their signature dish, the Duck Ragu with Papardelle. I look around and the pasta dishes are huge. I sniff the air and get very hungry "I want _that _smell" I say. 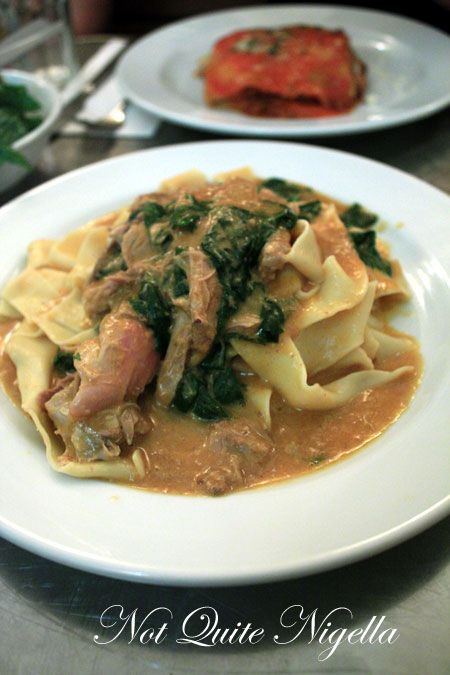 The Duck Ragu was a no brainer. I love Duck, I love ragu and I love papardelle and it is most impressive, the bowl piled high with papardelle and a very generous portion of soft duck ragu and wilted spinach. It's heavenly and creamy and with soft pieces of duck ragu but I can only get through a quarter of it at best as I'm sharing the vongole spaghetti with "Samantha". 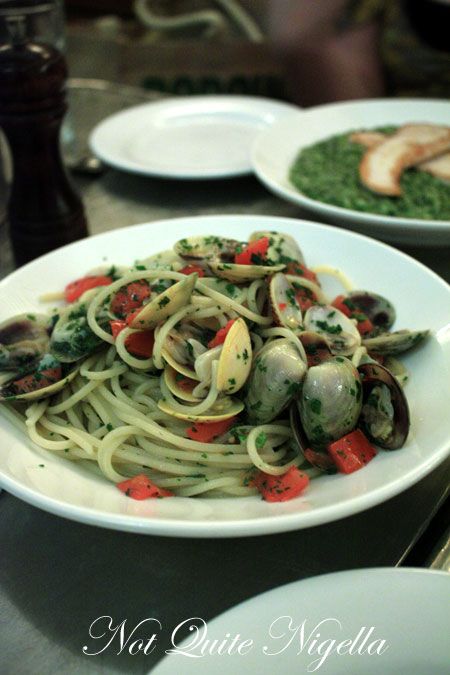 The spaghetti is perfectly cooked and the simple oil based sauce is flecked with parsley and chilli and small vongole clams. It's perfectly simple but moreish with just the right amount of spice and is a good contrast to the creamy papardelle. 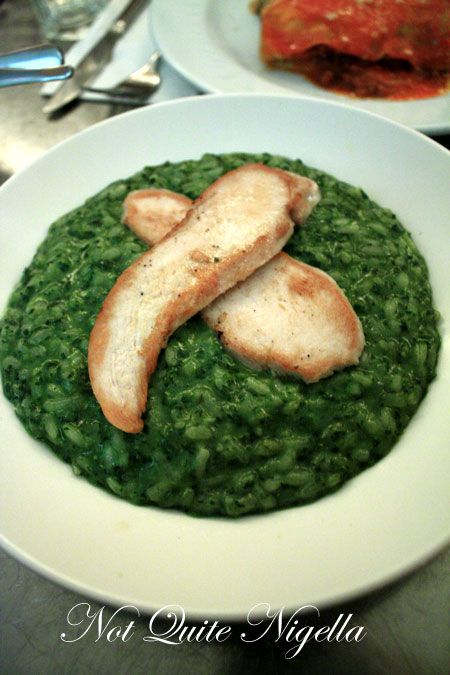 I try a bit of "Miranda's" Pesto risotto which is fantastic and rich although I don't try any of the chicken on top. 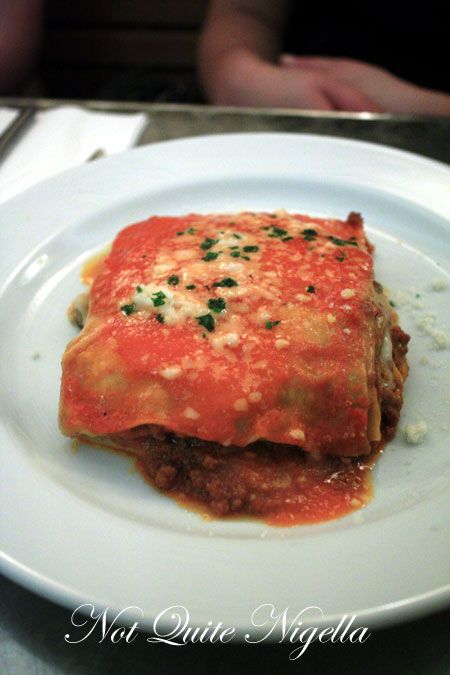 Charlotte's lasagne is lusciously good too and I wish I could have stolen more. 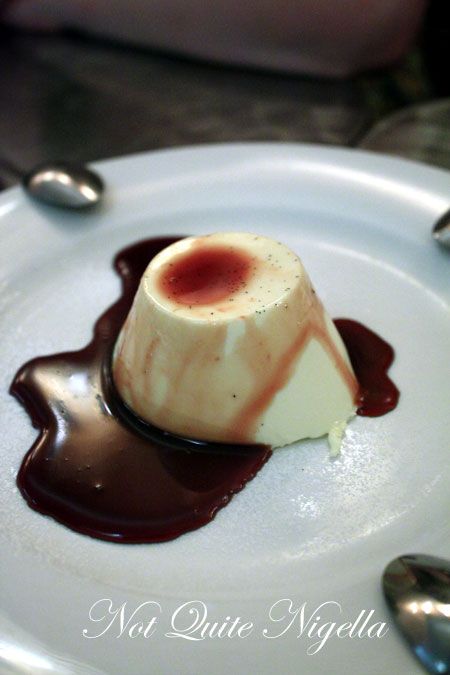 Four girls, four spoons and one dessert. Draped over and pooled alongside the wobbly jiggly pannacotta is a divine sauce made up of a red wine reduction with caramel, star anise, vanilla bean and other aromatics. "Samantha" and I go crazy over it and we are all lamenting the end of our wobbly, creamy delicious friend. There are murmurs of "the best pannacotta I've ever eaten" and I would have to agree. It almost helps "Charlotte" and "Miranda" forget the fact that their lusted after waiter personally hands the spoon over to Samantha whereas he simply puts it on the table for the rest of us. 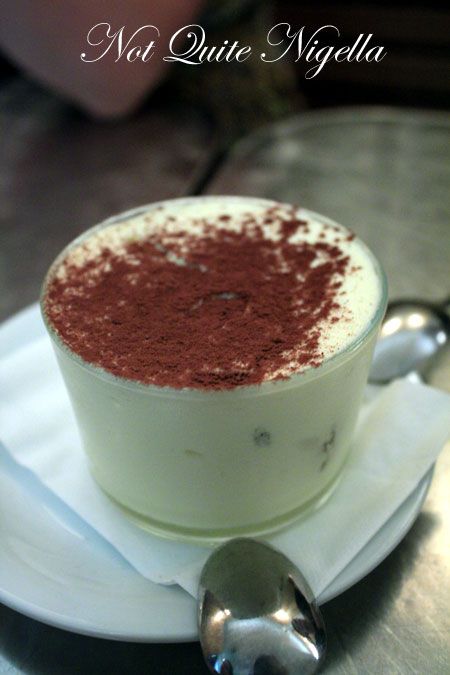 After the resoundingly good pannacotta, I get cocky and ask the girls whether we could fit in the Tiramisu. The Tiramisu isn't bad at all although it needs a bit more coffee and alcohol although we all admit that the pannacotta is a hard act to follow. Charlotte and Miranda give it one last go with the waiter when he brings our bill but suddenly there's a gasp from him and he points to my Louis Vuitton wallet on the table "That's faaabulous!" he trills. "I got one just like it for my birthday! A Gucci!" Charlotte and Miranda look at each other puzzled and start giggling. Perhaps they were never going to be in the running for him.

So tell me Dear Reader, which Sex and the City character are you feeling like at the moment?