The $5 a Head GFC Dinner Party! 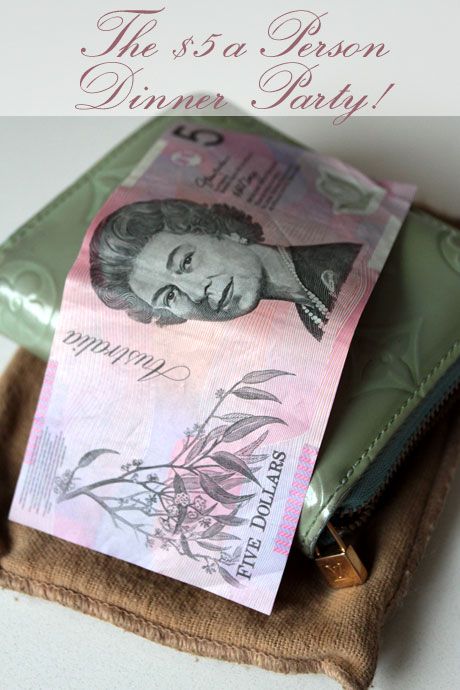 My friends and I are terribly busy people. So much so that when this dinner idea was first conceived it was around the time of the Global Financial Crisis last year. And whilst we love dinner parties, the fact was one friend was mid renovation, another mid toddler and we were mid moving so our GFC themed dinner ended up happening a little after what we had initially anticipated, almost a year later in fact, but we thought that the idea had merit and most importantly, the potential to have fun and be creative. After all when you dine out you can pay quite a pretty sum doing so, so we wanted to explore whether it was possible to eat a delicious three course meal for a mere $5 a person. And usually every time we entertain, it usually involves buying the best quality items and not really paying attention to cost as it's all about spoiling your friends so we wondered whether putting together a dinner party this way would change the dynamics of a dinner party. 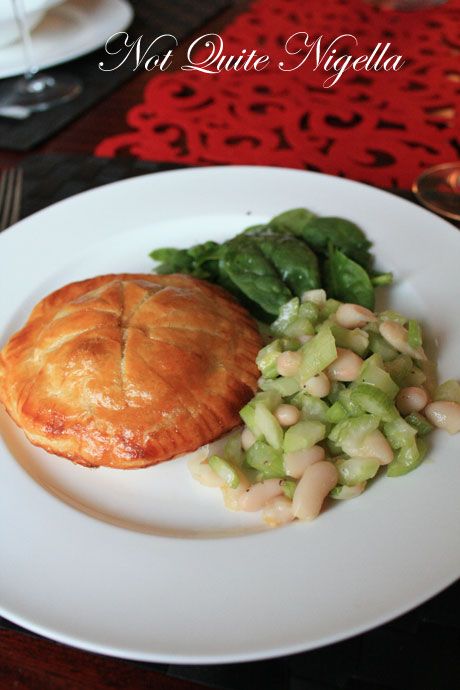 With six people our dinner would have to cost $30 or less and Gina, Teena and I were each allocated a course of roughly $10 each although more would understandably go towards the main. Gina would do dessert, Teena the entree and I would do a main as we would be hosting. We thought about the menu carefully - we could have made it vegetarian which would have certainly helped with the budgeting but the boys (avowed meat lovers, especially Hot Dog) weren't supposed to notice that it was a cut price dinner and he certainly would have if we had served up all vegetarian fare. To draw the line somewhere, we didn't include items such as oil, salt and pepper as they are items that one would commonly have in their pantry and it would have been impossible to do it otherwise. Wine was drunk and it was wine already in the cellar so that did help of course and the budget did not include mineral water. 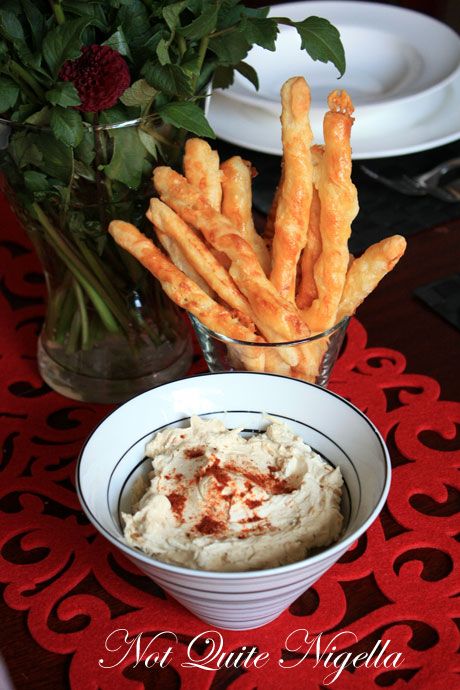 We discussed what we were going to make and came to the conclusion that pasta, breads and pastry would be good stomach fillers. I thought of some options and figured that an interesting idea for a main would be a pithivier which is just a fancy name and look for a pie filled with chicken and vegetables. Gina had a banana pudding idea for a dessert and Teena made not only a pasta entree but also a side salad to accompany my main. The supermarket shop was an interesting one. There was chicken on sale but I resisted as I wanted the menu to be one anyone could replicate and not everyone would be able to find chicken at 66% off.

I then went a hunting for some vegetables to put into the pithivier. I had originally wanted to do chicken and mushrooms but as mushrooms were at $7 a kilo I had to regroup and focus. What could I use in place of mushrooms that wouldn't cost the earth? Aha! Frozen peas would work!

The dip was a last minute decision when I was at the supermarket and realised that we didn't have any nibblies and it was only a few hours before guests would arrive. A home made hommous would have been another idea but this was quicker and didn't require any heavy equipment. Instead of crackers or toasted Lebanese bread I decided to use scraps from the pithivier pastry and roll up some cheese straws to dip into the dip.

We broke down prices and most items were bought at the usual supermarkets like Coles, Woolworths, Franklins and Aldi but there were also purchases made at small green grocers or whereever a bargain was to be had.

We took the step a little further as we are fans of dressup and only either wore:

a) clothing that was given to us for free

b) clothing that was $5 per head

Which resulted in Gina and Hot Dog coming up dressed in some fabulously retro outfits, Teena coming in her free Qantas pyjamas, Phillipe dressed in free corporate tshirt and shorts, Mr NQN in free sailing gear and me in a dress borrowed from my mum! I'll spare you the photos of our outfits. OK maybe I'll sneak a pic of Hot Dog in his spiffy suit... 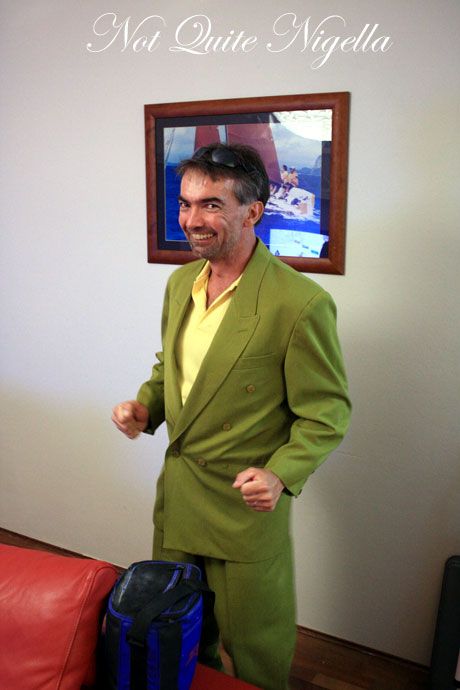 And what of the food? Reactions were mostly positive. All of us remarked that the food was tasty and it was indeed possible to put on a dinner party for six people for less than $30. Even Hot Dog who had a bit of a kvetch at the beginning saw the benefits to it. Teena remarked that eating frugally forces you to eat healthier and incorporate more vegetables into your diet. It's true that eating more vegetables as well as beans and other items that are very good for you fill you up with fibre whilst being low in fat.

Did it change the dynamics of the dinner party? Not at all. It is after all the company that counts and if you're with friends, it doesn't matter if you've bought the grass fed aged eye fillet or the cannellini bean salad, good company is good company is good company. People paid attention to the food and marvelled at how we managed to come in at under $30. The grand total you may ask? $29.93! A whole 7 cents under budget :)

So tell me Dear Reader, do you enjoy throwing dinner parties? Do you have any secrets to a great dinner party?

Step 1 - Mix the French Onion mix with the light sour cream and place in a bowl and sprinkle paprika over the top.

Step 2 - Fry garlic in frypan on medium heat with olive oil until golden, add broccoli and cook for another 10 min, breaking up the broccoli with the back of a mixing spoon. In the meantime, re-boil water and add salt to cook pasta, drain when al dente. Once pasta is cooked, pour into frypan and mix in with broccoli, adding breadcrumbs to thicken texture.

Step 3 - Add salt, pepper, olive oil and parmesan cheese to taste. Heat up garlic bread according to directions and serve with pasta. 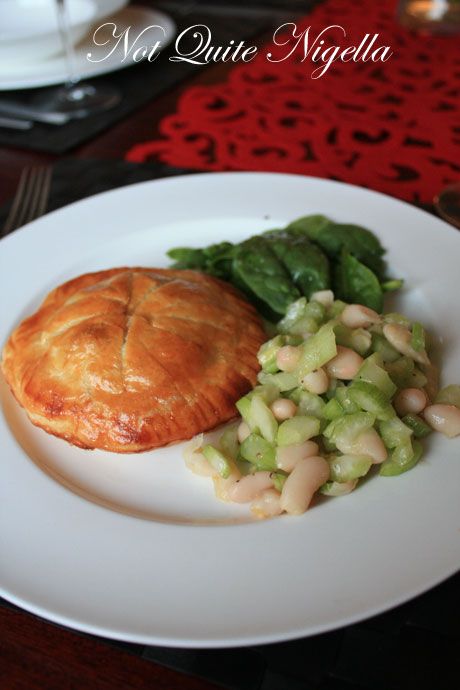 You will also need a rolling pin and 2 round cutters, one slightly larger than the other.

Step 1 - In a medium saucepan, heat oil and sweat off onion nad garlic. Add chicken and simmer until cooked. Add cream cheese and lightly fry it until it is melted and then add milk and stir until it becomes a creamy sauce. Simmer gently for about 20 minutes until the chicken is soft and then add peas and cook until done. Cool.

Step 2 - Line a baking tray with parchment. Roll out puff pastry and cut out 6 large circles and place them on the baking tray. Place a small mound of the cooled chicken and pea mix to the centre. Cut out 6 smaller circles and fit them to the top sealing the edges. Lightly score patterns on the top of the pastry. Place in fridge for 30 minutes. Take out of fridge and brush with egg yolk mixture. Preheat oven to 200C/400F and bake for about 30 minutes until golden brown. Remove from oven and serve with baby spinach leaves with dressing and the cannellini bean and celery salad below.

Serves 6 as a side

Step 1 - In a saucepan, combine sugar, cornstarch and salt. Gradually add milk; cook and stir over medium heat until mixture comes to a boil.

Step 2 - Cook and stir 2 minutes longer. Stir a small amount into the egg yolks; return all to pan Cook and stir until thickened.

Remove from the heat; stir in vanilla. Chill for 1 hour. Just before serving, fold in banana. Garnish with mint if desired.