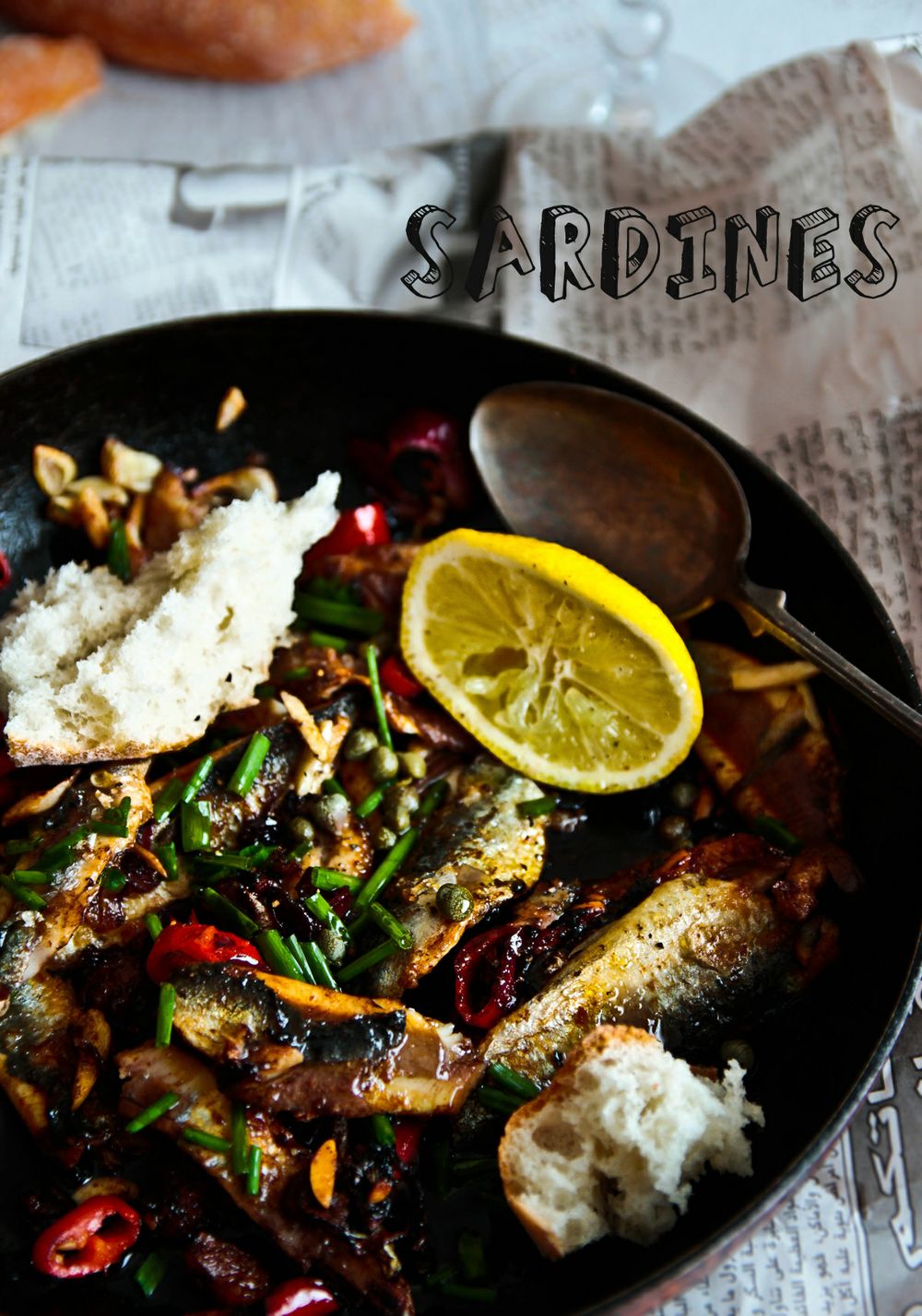 Mr NQN and I have a joke with each other whenever we go grocery shopping. He calls me a cat and whenever we walk down the supermarket aisle and pass the pet food section he says to me "Oh would you like something to eat now?" This is all very funny (at least to us) and I tell him "No thank you! I told you I eat human food now!!" which we have a bit of a giggle about. Our little routine was very amusing to us until one day when there was a couple standing behind us that heard this exchange.

I felt terrible because she had such a sincere caring look when she looked at me communicating "Tell me with your eyes if you're in trouble!" I wanted to hug her and thank her for her concern and just explain that we just have a strange sense of humour and that I have never in fact eaten pet food. "We're just kidding" I whispered to her "We think we're funny but we're not really" and she gave me a look that said that I had become just too confusing or silly to deal with. With a wan smile they departed.

I do eat sardines which I always associate with cats and they were a favourite dish of both my cats. I know sardines are not the most popular dish, in fact I'm willing to bet that when people saw the title of this post, they skipped it entirely. And for someone that has recently come into loving sardines, I was unable to resist them when I saw them at the fishmongers one weekend. While some (but not all) canned sardines are good, fresh sardines are absolutely delicious and if you happen to find them, I urge you to buy them, particularly if you love strong, salty flavours.

I took my haul of fresh sardines home knowing that they must be eaten on the day that they are purchased and spoil faster than any other fish. Sardines are very high in omega 3 oils EPA and DHA, Vitamin B12, selenium and other oils that are good for cardiovascular health and brain function. They're a fish eaten by lots of other larger fish and because they're low on the food chain, they contain low levels of mercury. You want to avoid individual sardines that have "belly burn" on them which is where the guts spill out of the broken belly. Unfortunately they don't freeze well at all and turn mushy once you thaw them while the oil goes rancid. 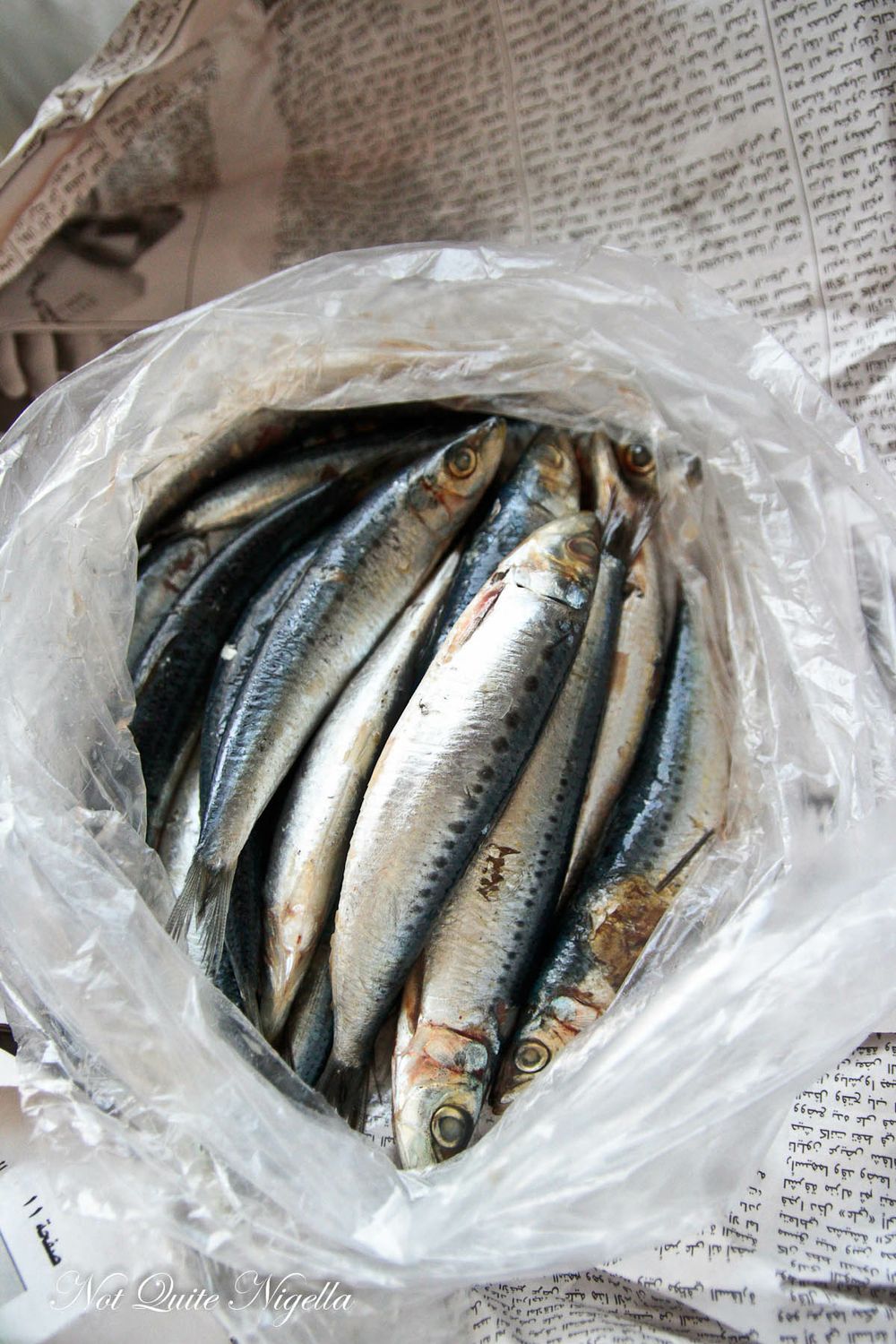 I love learning new skills in the kitchen and having only watched someone filleting a fish I was excited to learn how to fillet a sardine. I figured a small fish is a good one to learn it from (much like deboning a quail is markedly easier than deboning a turkey which is probably the most confronting thing I've ever done for the blog). I wasn't quite prepared for how bloody it was, there are a lot of crimson guts and organs and I now really appreciate being able to buy an already gutted fish.

Apart from filleting the sardines, they're incredibly easy to prepare and took less than 10 minutes to cook even with the preparation once filleted. Some of you would probably lump sardines in the "too fishy" category which is where I had them and indeed they are "fishier" than other types but the sauce that I made is an agrodolce or a sweet and sour type of sauce which tempers the fishiness and savouryness of sardines with a sweet balsamic and lemon juice sauce. Paired with a crusty sourdough baguette and we had the perfect makings of a simple Sunday night dinner and even Mr NQN asked for this dish again.

But then again he's on his best behaviour after the supermarket incident ;)

So tell me Dear Reader, do you have lots of in jokes with your friends or partner that nobody else seems to understand? And do you like sardines? Have you ever filleted a fish? 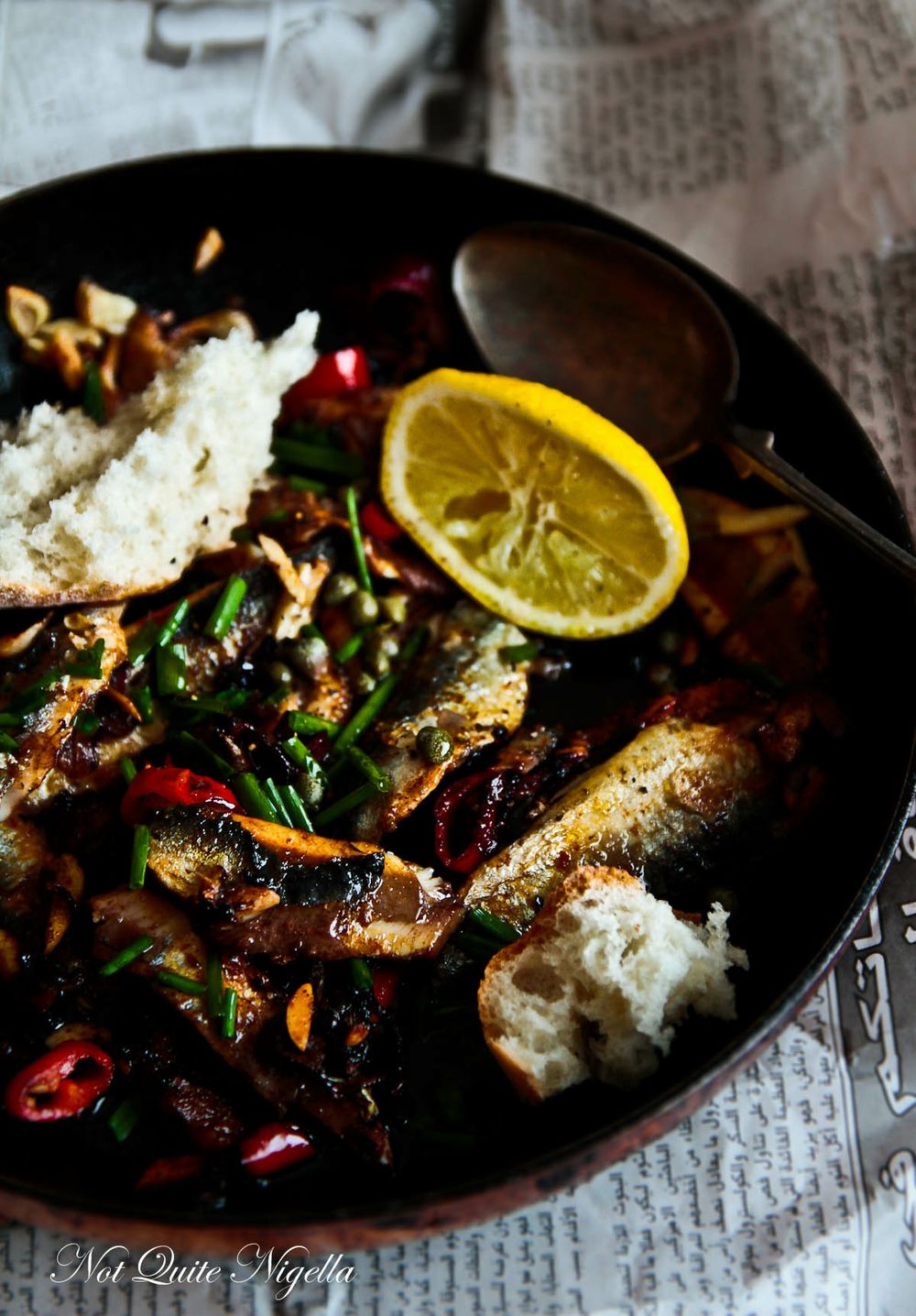 Step 1 - Fresh sardines must really be used on the day that they are bought (and caught ideally speaking) because their high Omega 3 content means that they go rancid very quickly. They also do not freeze well at all. To prepare sardines you need to fillet them. Put on an apron and don't wear your best clothes because there is a surprising amount of blood and guts for such a small fish. Take the head firmly and pull down towards the stomach-most of the guts will come out at this point. 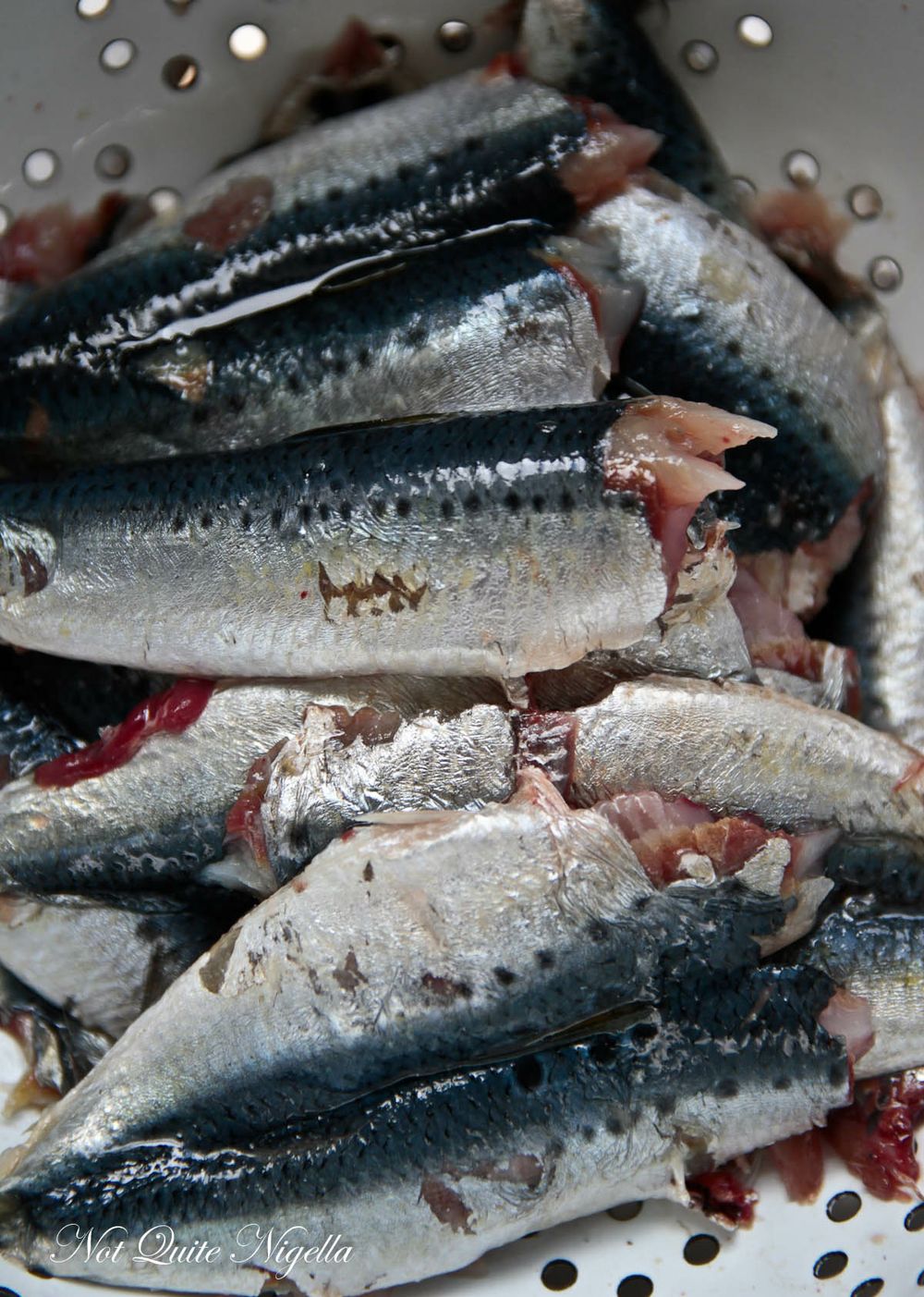 Using a pair of scissors, cut the skin and flesh along the belly line and remove the rest of the organs. Run under water to remove excess blood and then take the backbone from the end where the head was and pull the backbone out-it should come out in one piece. Don't worry about the smaller bones on the sides of the splayed fillet, they're small enough to be eaten. Rinse under cold water. 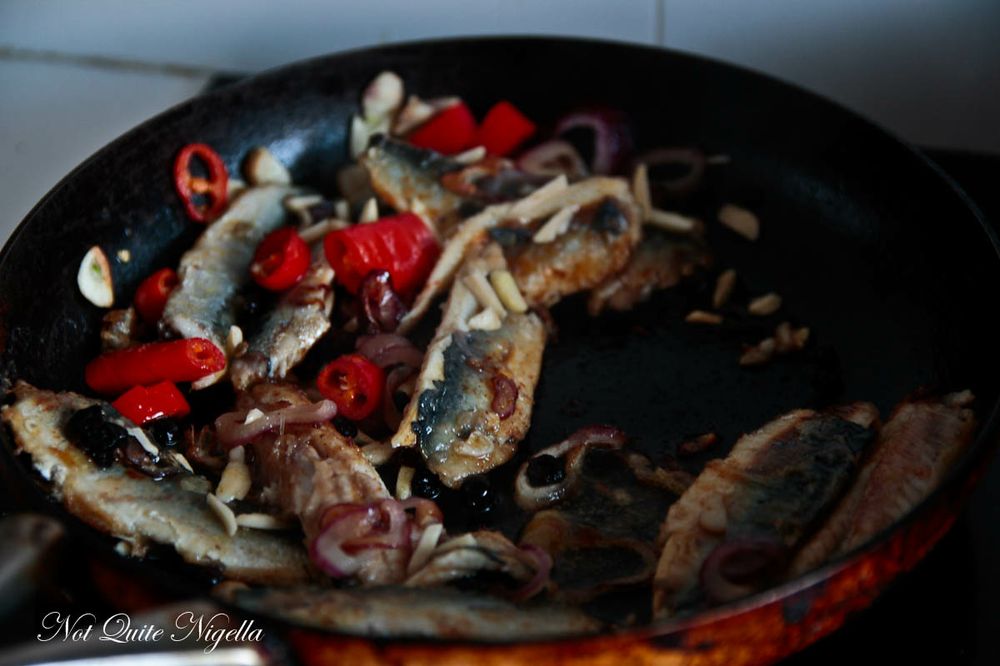 Step 2 - Heat oil on a pan set on medium high and while it is heating, mix the flour and cayenne pepper together and dredge the whole sardines in the flour lightly. Fry the onion and garlic for a minute or two and then add the sardines-they'll naturally split into two fillets once they're cooked. Add the currants, almonds or pine nuts, capers and chilli and fry gently until the sardines are cooked through and golden-it doesn't take long and they're done within a minute or two. Remove from heat and add the balsamic vinegar, sugar, a tablespoon or two of olive oil extra and the lemon juice. Stir gently to combine and add salt and pepper and fresh chives. Serve with crusty bread.< 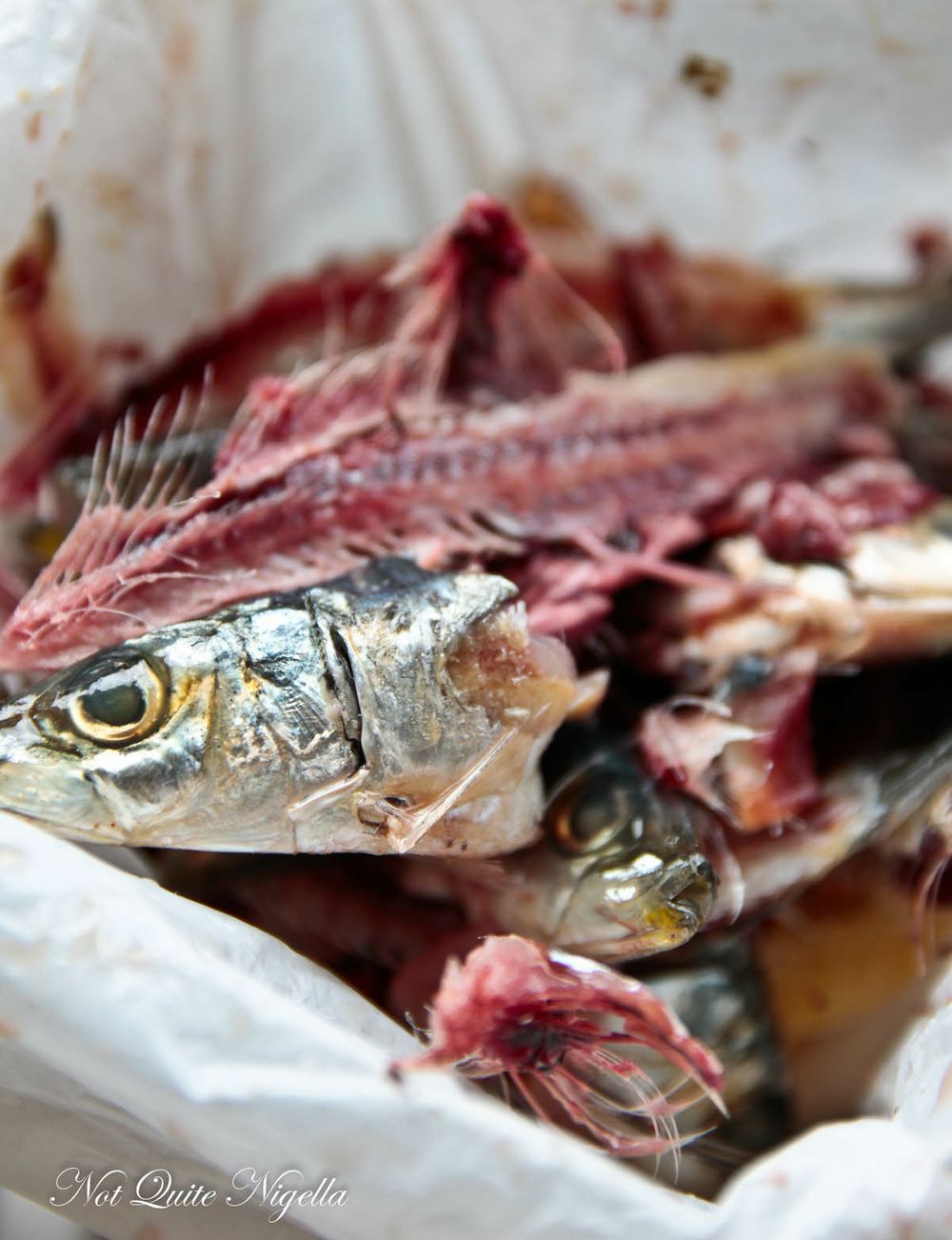