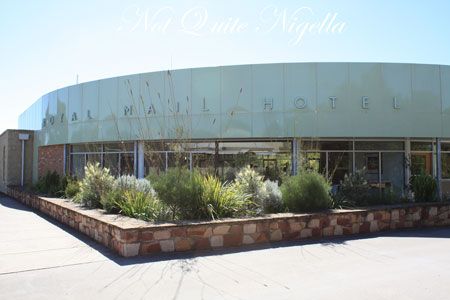 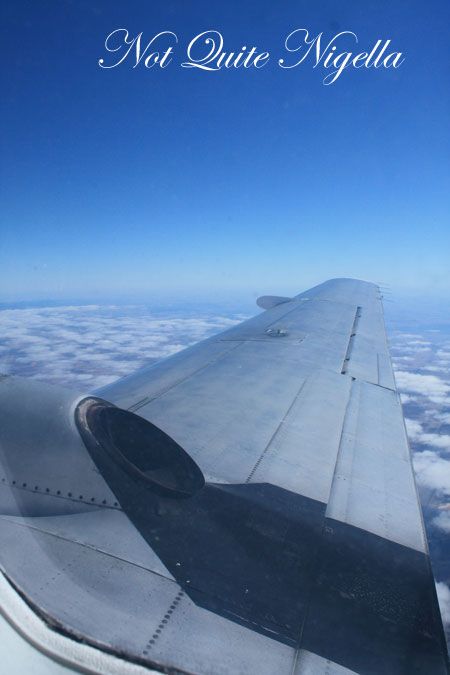 It was pitch black when my phone alarm went off. I fumbled for my phone and put it on snooze but before it could chime again I raised my weary, sleep deprived body out of its four hour sleep and got up remembering why I had set it so early. I was on my way to Dunkeld, Victoria today to the Royal Mail hotel to help celebrate the launch of the Melbourne Food & Wine Festival! 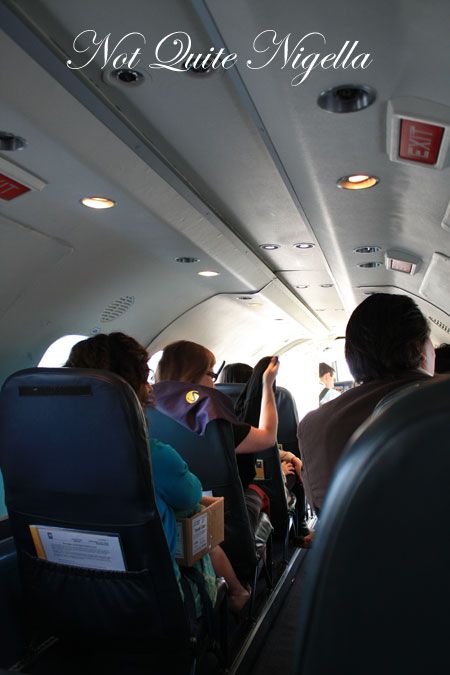 Dunkeld is a small town in Victoria of less than 500 yet incongruously it boasts what is said to be one of Australia's best restaurants. Set near the Grampian mountain region, it is best accessed by small charter plane. The flight to Melbourne is smooth and then we board the smaller charter plane to get to Hamilton airport which is near Dunkeld. Boarding the small plane is like being in an episode of Being John Malkovich but its thankfully without event and we take the 20 minute drive to The Royal Mail Restaurant where chef Dan Hunter, the former chef de cuisine of Andoni Luis Aduriz's  Basque Mugaritz restaurant (who only days ago had their kitchens devstatingly destroyed by fire). It is also a place that Anthony Bourdain visited during his Australian leg of filming "No Reservations".

Before we try out the 10 course degustation we get a tour of their gardens. Yes The Royal Mail is a restaurant that grows as much fruit, vegetable and herb produce as possible and their plan is eventually to have a completely self sustaining garden or should I say gardens as the gardens are spread out across five different properties. Some of the grounds were established 10-12 years ago with some of the fruit trees being 6-10 years old. They only use organic seeds and organic gardening practices. Some items they grow are very unique and hard to find commercially such as a Japanese white strawberry which has a shelf life of 2 days and needs to be handled very delicately. 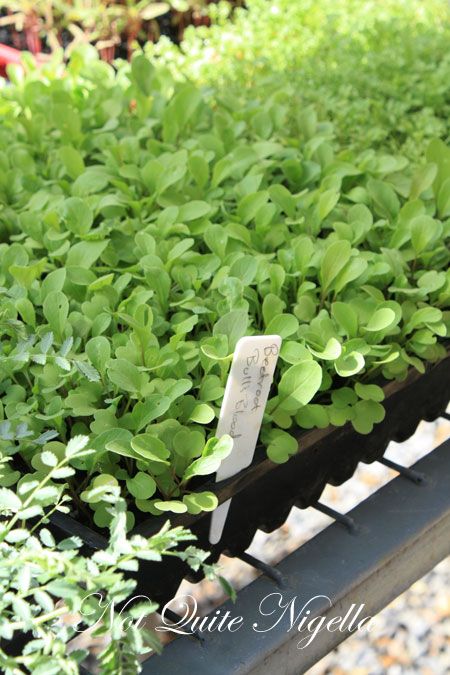 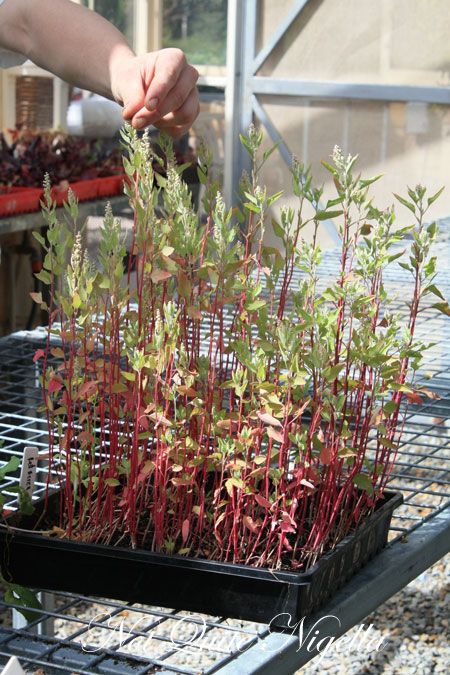 We're introduced to young chef Damian Neylon who is the chef that tends to the garden. Yes you read right, the chefs attend to the gardens here. He's obviously ambitious taking on this task but he says that he also feels that it's rewarding. They grow a total of 150 herbs and with this also comes challenges. They need to work 15-16 weeks ahead and to avoid having to buy things in, they simply change the menu to suit what is available. Working like this encourages the kitchen to dehydrate, powder and preserve items as much as possible. 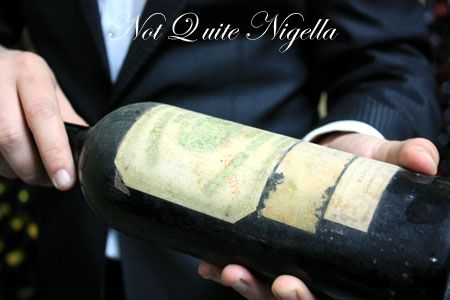 I quickly photograph and step away...

We also get a peek into their 25,000 bottle wine cellar where precious bottles of wines are stored such as a $16,000 bottle of Romani Conti. I grab my camera tightly knowing of my clumsiness and propensity to bump into things. Somehow I know I'd trip straight over that $16,000 bottle as I am literally a Taurean in a china shop. After our tour, we sit down to our 10 course degustation prepared by Head Chef Dan Hunter. 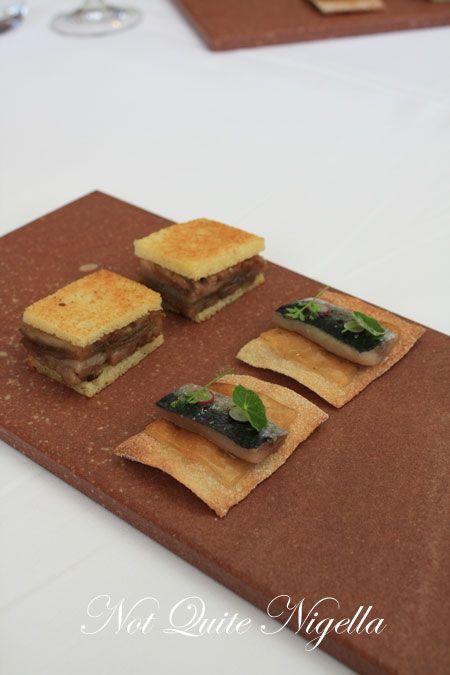 To call this little rectangle a pork sandwich seems a bit too simple. What it is is two slices of thin lightly toasted bread and the softest, gooeiest, unctuous pork you could imagine. Our table is quiet eating this apart from the odd moan escaping. We're all busy eating this in tiny bites to prolong the experience. I'll admit now that I'm not a huge sardine lover so whilst I can appreciate sardine lovers would really like this, it's not my cup of tea. It's a soft sardine on a wafer-thin cracker with an aspicy sort of jelly on top. 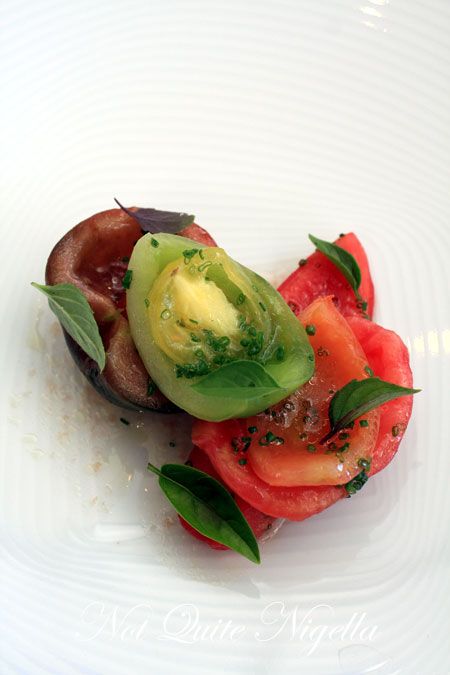 The heirloom tomato salad is deliciously simple with freshly picked tomatoes from the garden in sweet varieties, miniscule chopped chives and various types of basil including a fragrant lemon basil which just sings with flavour. 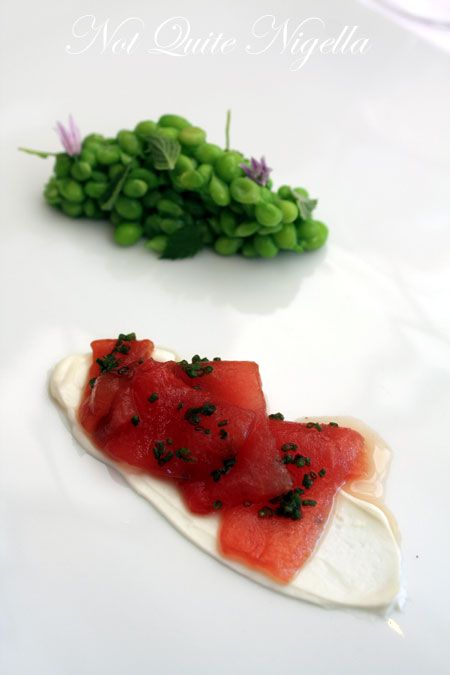 One of the most intriguing dishes was this two parter with a wall of minted sugar snap peas, creamy mascarpone-like soured milk and the sashimi. And what sort of sashimi was it? It looked like tuna but tasted nothing like tuna. We hear the other table asking the same thing and it turns out it is watermelon sashimi of all things.  We have to ask how it's done and the floor staff know straight away. They quarter a watermelon and bake it at 70 degrees for 12 hours where it is dehydrated and caramelised. It is then vacuum sealed and snap frozen to set the texture, the result being unusual and delicious. 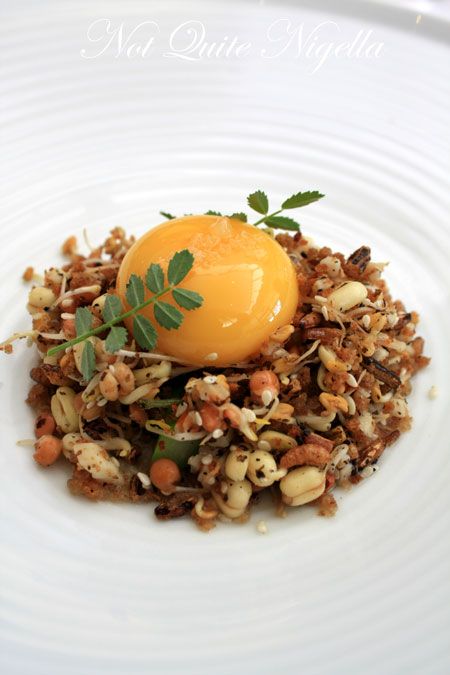 A dish that many thought was like eating breakfast, it was a fenugreek, mung bean and legume salad with rye and yeast and a runny egg yolk in the centre.  When cracked the yolk oozed all over the crunchy salad giving it a delectable creaminess. It was one of the most original and unforgettable dishes for many. 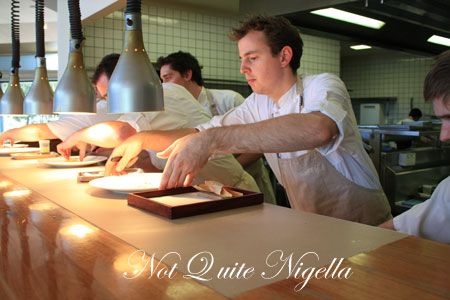 I get up and watch the tweezer action from the open kitchen as the chefs huddle around the pass and plate each item up. It looks like they've timed the movements like a ballet. 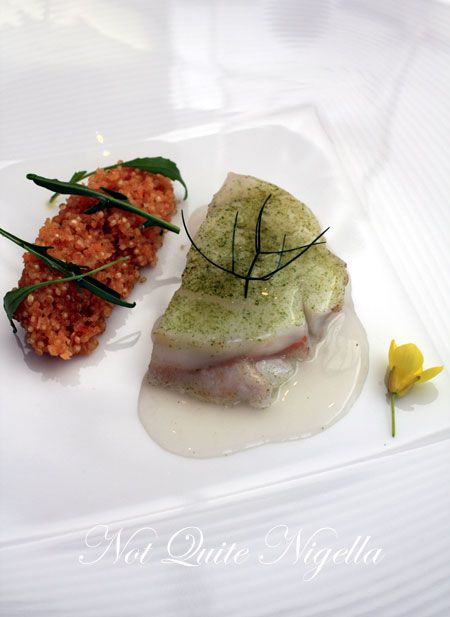 We could really smell the lobster being prepared. It was a slice of lobster with proscuitto in the sauce on top of it with quinoa that reminded me of fried eggs. It's a dish that I'm not really in love with with the lobster being a touch bland and hard to cut and there is no discernable prosciutto flavour and everyone at the table feels the same. 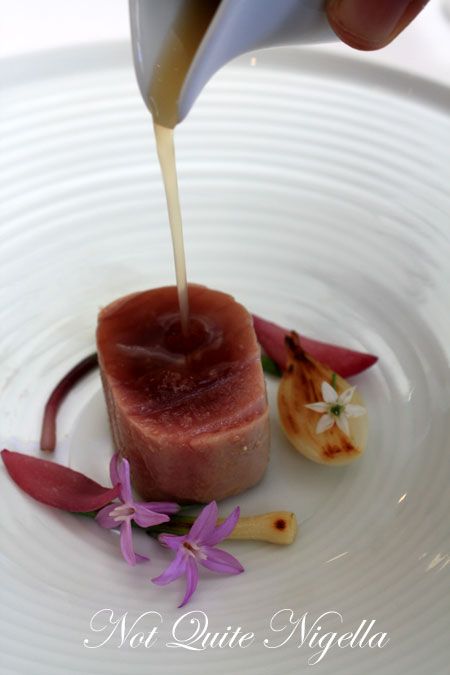 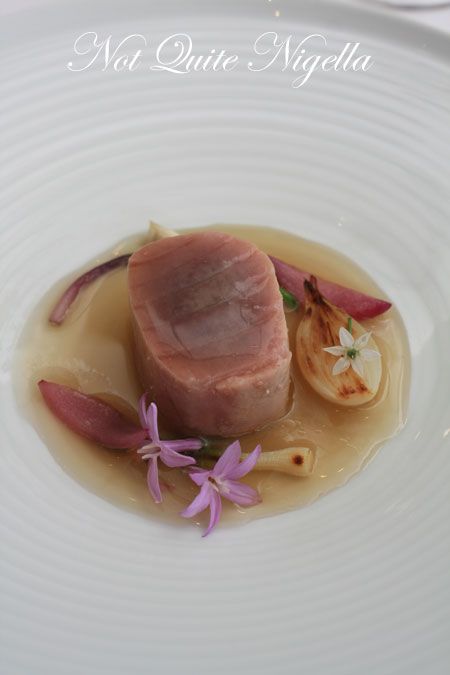 The yellowfin tuna is a stout portion pink in the middle and cooked on the outside. I can really taste the nori flavour and the garlic and onions. 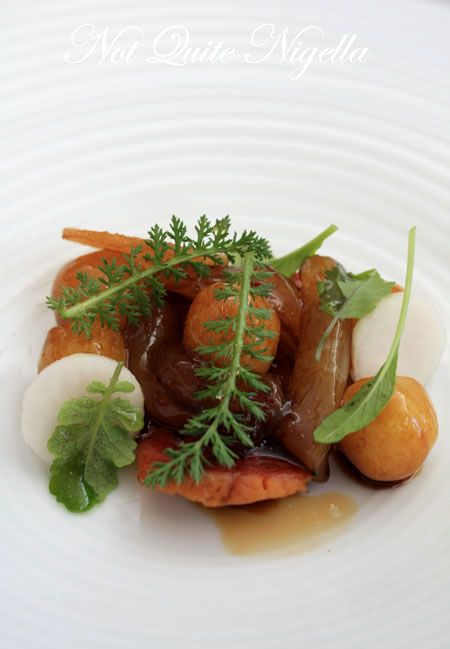 This was an intriguing dish with the very smoky eel. The fern-like fronds on top are Wild Yarrow which Dan confesses "grows on a nature strip in town". The beef tendon is so soft and delicious that we all wonder how it was done and he explains that it is sous vide for 12 hours after which time it turns into pure gelatin. When it is cold, it is hard but when heat is applied, it turns into this gooey, jellied texture.  The sauce is also made from the bones of the eel to bring it all together. 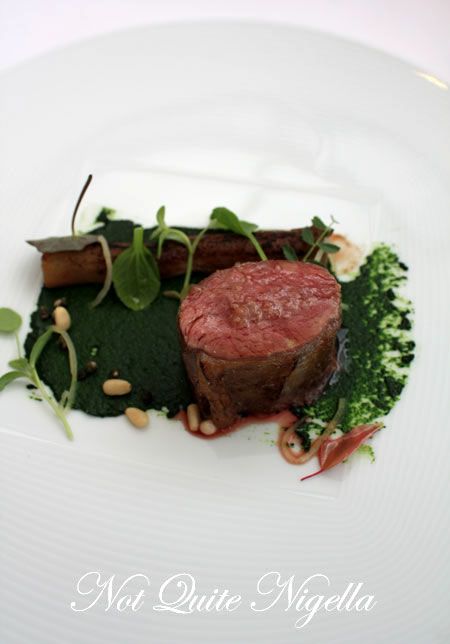 The standout dish for me was definitely the lamb dish. There is a baton of eggplant cooked in white miso with a hint of lemon and the Flinders Ranges saltbush lamb is tender and perfectly cooked. We're all enjoying this dish immensely and I blurt it something nonsensical like "It makes your saliva flow" to which Sally counters with the more eloquent expression "It's mouth watering".  The chlorophyll is from spinach. 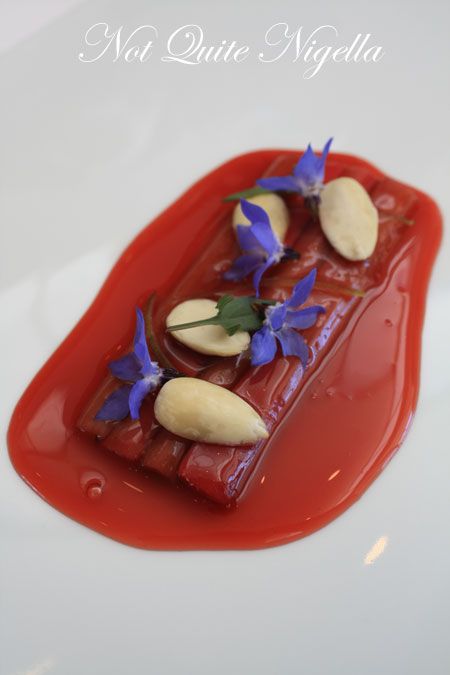 Rhubarb with citrus, almond and licorice

One of the prettiest dishes I have seen, the slicker than lip gloss red is gorgeous. I'm not a huge licorice lover but it's handled very subtly here. There are three rhubarb batons, slightly firmer than I am used to and they pair well with the crunchy almond (although I ran out of almonds for the mouthfuls of rhubarb). Astrid picks up that sauce has a maple syrup flavour which is why I was thinking of pancakes when I ate these. 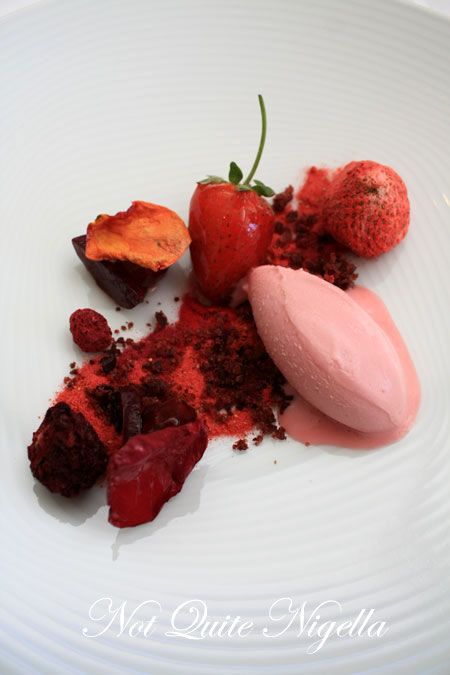 What has to be one of the prettiest dishes ever is the  medley of fresh and dried berries, olive, beetroot and rose. The berries range from sweet to sour to crunchy and soft and the beetroot ice cream is distinctly beetrooty but not odd at all. I don't taste much black olive in it but I do love the dehydrated rose petals which are similar to very thinly dried apple crisps albeit with a rose flavour. 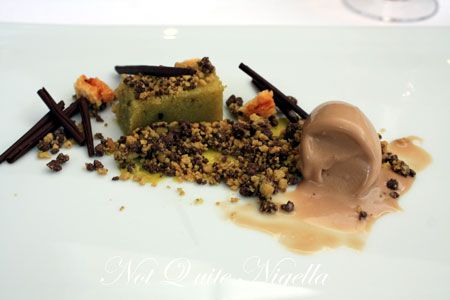 The outstanding dessert for me was most definitely the moist pistachio sponge, the tiny crunchy crumbs of honeycomb and chocolate and the sticks of chocolate with a hazelnut ice cream. I am so entranced, I forget to take a photo of it so Mel quickly loans me her dessert for a snap shot. It's divine and I find myself chasing down every single crumb on the plate. At some stage during this meal, our table have all contemplated plate licking.

Ahh yes, for a moment we all contemplate raising the Dunkeld population just a smidgen.

So tell me Dear Reader, have you ever licked a plate in appreciation or wanted to but didn't? 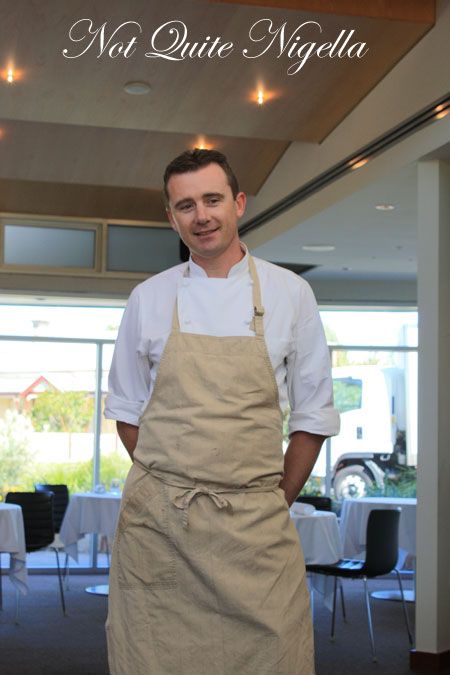 NQN visited the Royal Mail as a guest of Tourism Victoria and the Melbourne Food & Wine Festival. 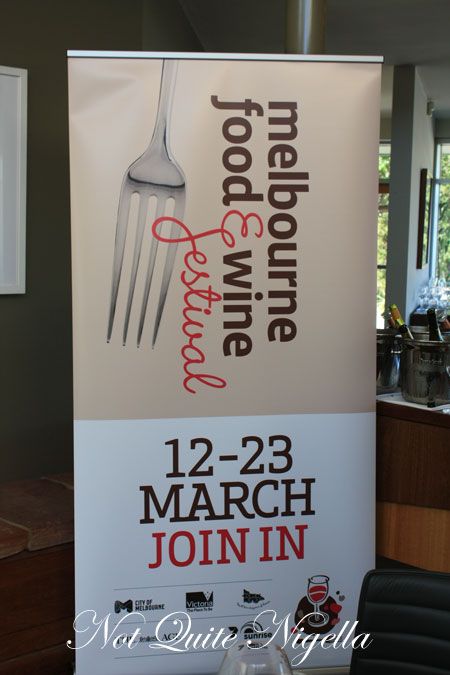