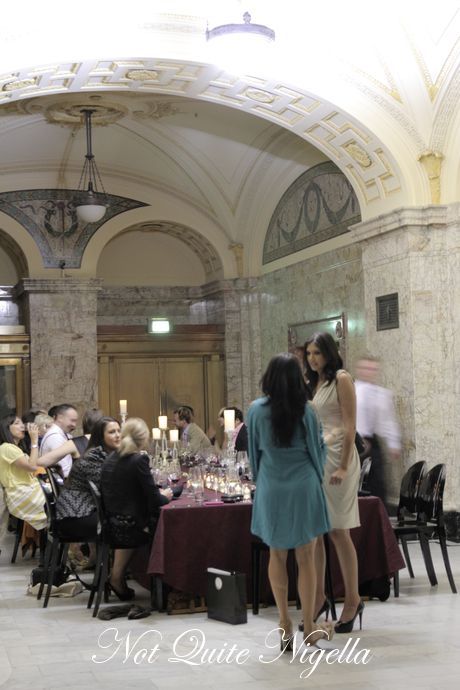 When most people go to a bank, it's not for anything particularly exciting. It's usually something rather mundane such as depositing or withdrawing money and usually involves waiting in a queue for ages only to have your hard earned cash whisked away from you. 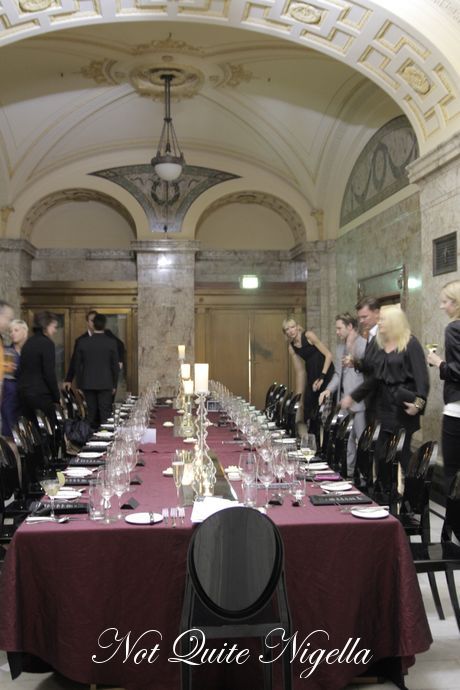 So when I alight on Elizabeth Street outside the ornate marble building of the Commonwealth Bank I'm not quite sure whether I'm at the right entrance at all. Until two smiling men in suits open the doors for me and usher me downstairs. "Everyone is downstairs" they tell me and I click my heels against the marble floor and descend the steps to the area underneath the bank just outside the safety deposit boxes and the vault. A long table is set for us and there are various people standing around chatting including Firass Dirani the Underbelly actor. 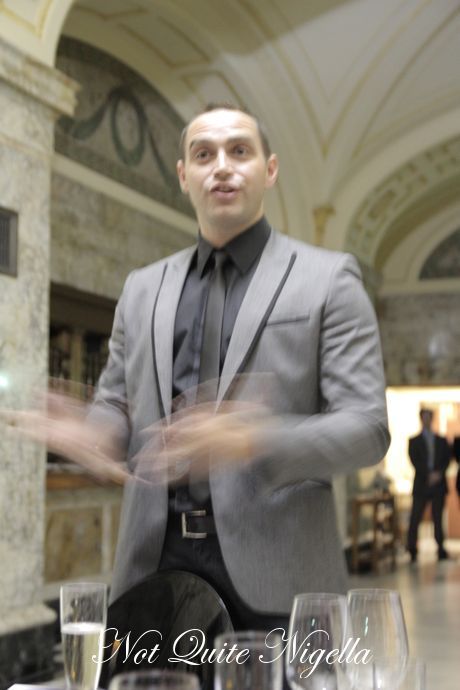 Table4Ten is an annual charity event for the Prostate Cancer Foundation which has a rather clever dining idea behind it. In Sydney almost 60 of Sydney's top restaurants including Tetsuya's, Marque, Becasse, Buzo, Pier, Quay and Rockpool among many others donate a table for ten people in their restaurants. Each table is hosted by a person who is responsible for coordinating the $250 a ticket table and to get a seat at one of the invite only tables. Then before the event, each host is randomly assigned a restaurant. And at the end of the evening, cars take each table of ten to a mystery location for an after party where everyone can party together! 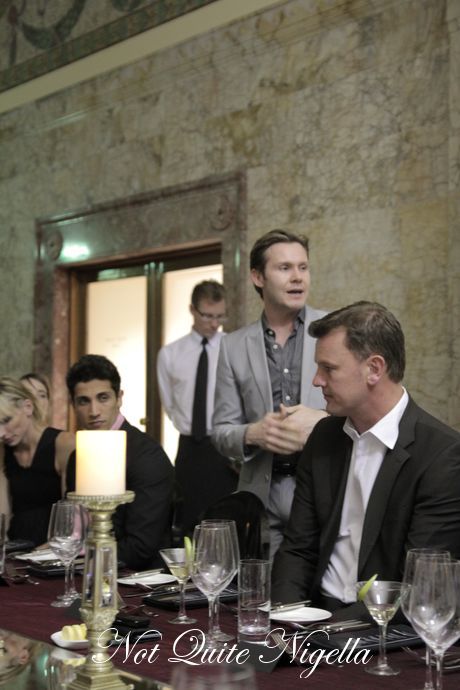 GQ's Nick Smith and Firass Dirani to his left 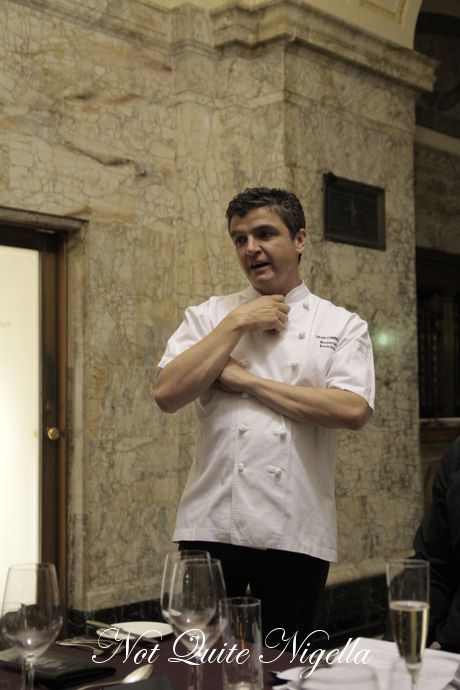 We're being hosted by GQ magazine and Robbie Robertson, the Table4Ten chairman whose father underwent treatment for prostate cancer. In 2008 the event raised $100,000 for the Prostate Cancer Foundation of Australia (PCFA). We're lucky enough to be assigned a very rare place to dine-the Commonwealth Bank Vault which is rarely opened for special events.  I am sitting next to chef Sean Connolly and the Restaurant Associates (which sounds like a band to me) who are creating the food for tonight. On my other side is Selina from Home Ideas Magazine who is a regular reader of Not Quite Nigella along with her office mates! The wines are by Glandore Estate wines who has supplied the wines for the last three Table4Ten events. 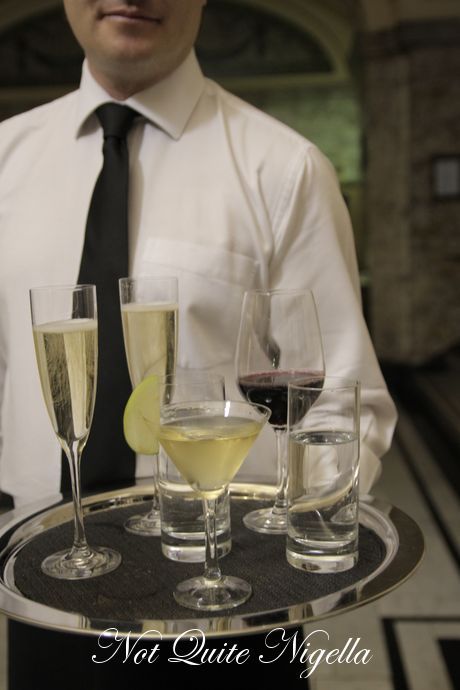 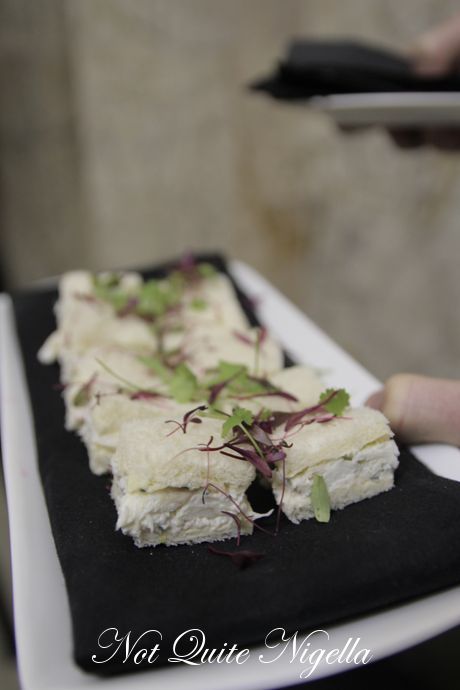 We're served delicious Appletinis and canapes on our arrival. The King Crab sandwiches are a favourite of mine as I love a lovely, soft pillowy crab sandwich as it has microherbs sprinkled on top giving it a zingy flavour. 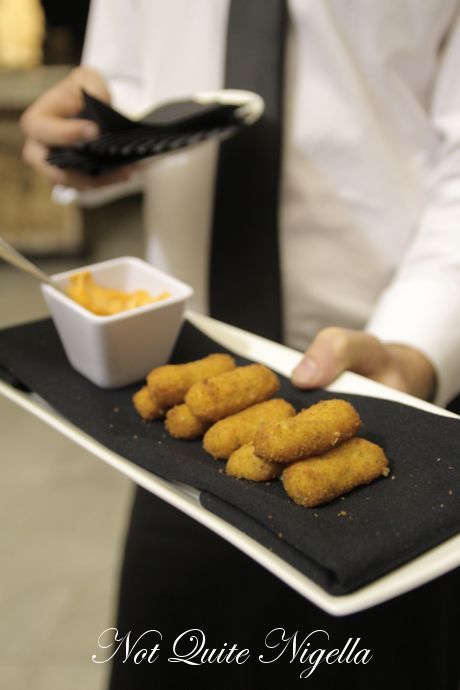 The goat's cheese croquette is rich with the goat's cheese and has a slightly mustardy flavour to it. The outside is crunchy and golden and the inside is soft and velvety. 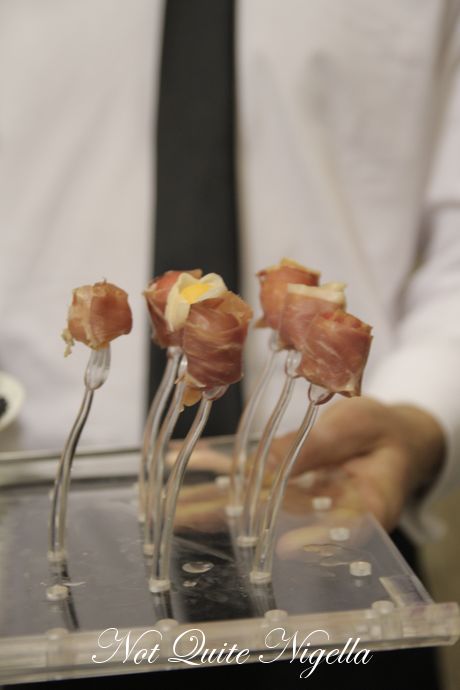 I get a stick of jamon serrano wrapped in a juicy cube of rockmelon which is refreshingly quenching, salty and rich at the same time. 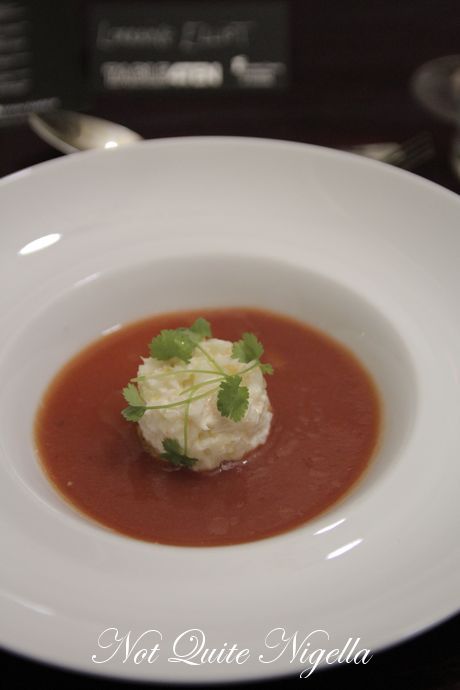 I was very excited to see Johnny Love Bite tomatoes being used as these are my favourite tomatoes as they're so sweet and flavoursome. Sean says that the grower slightly starves them just before they are harvested which brings out all of the flavour and this is the key to why they are so sweet and flavour packed. This is a delicate process though as if the farmer takes it too far, the whole crop is ruined. The cold gazpacho, which can sometimes be too acridly strong is tempered nicely with the sweet tomatoes and in the centre there is a tian of diced cold lobster and prawns with a wonderfully springy texture to them. 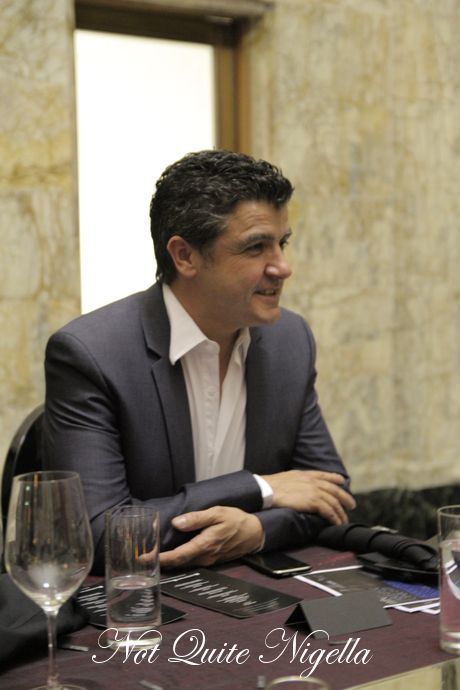 I chat to Sean about the challenges of cooking here as there is no commercial kitchen, only a reheating kitchen upstairs so the food had to be able to be prepared ahead of time. Now that he has famously quit his post at Astral and Sean's Kitchen at Star City after being there for 15 years his plans now focus on travel and he is excited to go truffle hunting for  in Italy for the first time as well as visit his 96 year old grandfather in Yorkshire.

"It seemed to come to as quite a shock to a lot of people around Sydney but not to me. I had been working on an exit strategy for at least 4 months. 15 years years is enough to give any company and I had built a fantastic platform during my time at Star & decided at the age of 43 it was now or never!" he says explaining his departure from Star City. He also adds that he will "consider carefully my next step to the future but there is no rush as I want to spend the summer with my wife & three children. Toby 7, Kiera 9 and Eliza 12".

And what does he eat at home? He tells us that his wife Jo is actually an excellent cook (some joke better than he is) and his number one meal from her is sausages baked in the oven with some borlotti beans. 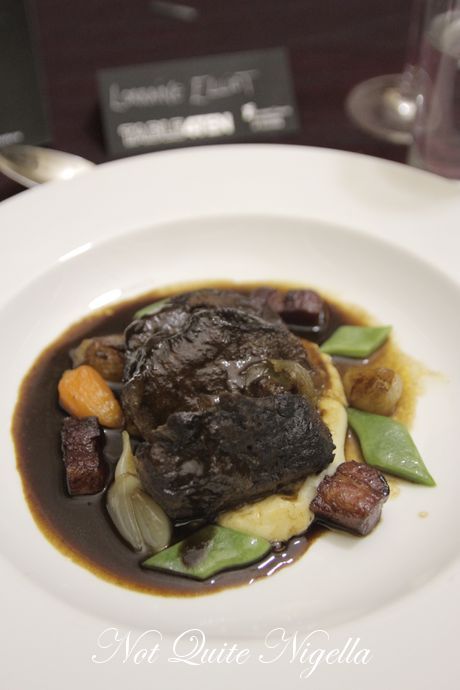 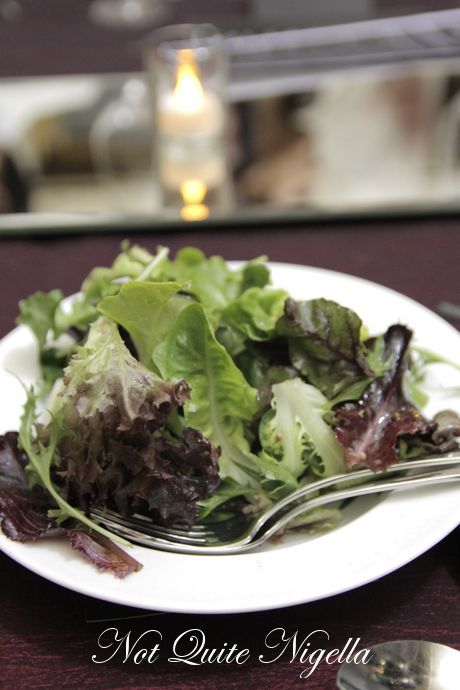 Our main is substantial and Wintery. The meat has been marinated in white wine and cooked for four hours so that it is incredibly soft. It sits on pommes puree (mashed potato), cubes of pork belly, slices of snow peas and soft, sweet eschallots. I know I'm supposed to be eating healthier in preparation for Summer and bikini weather but we can't help ourselves. 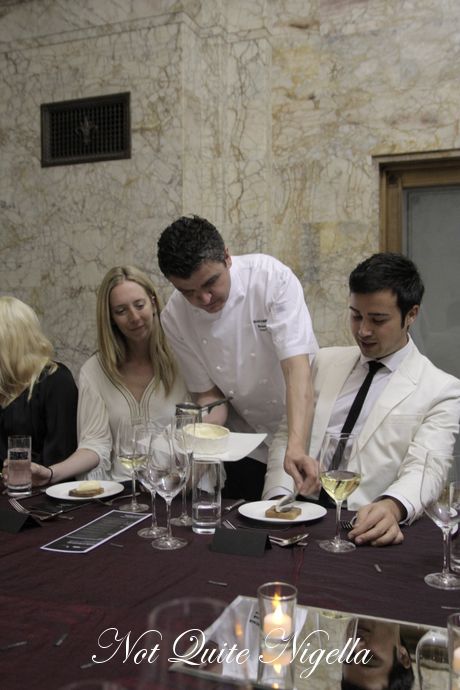 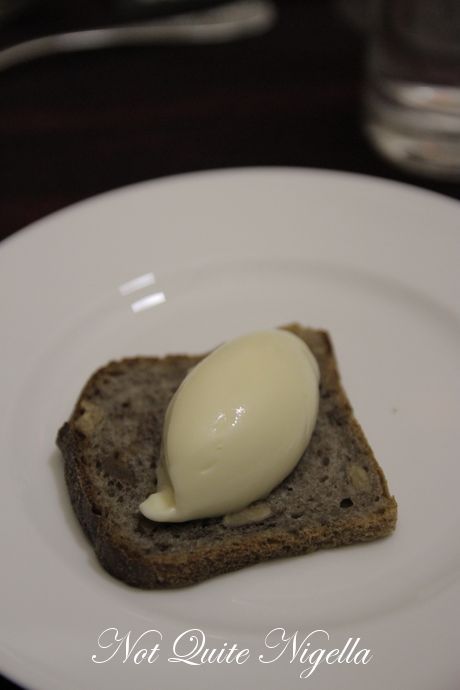 I'm always a bit secretly thrilled when we have something served at the table and they set down a square of toasted organic fig and walnut bread and Sean comes around and expertly spoons a quennelle of richly luscious cow's milk brillat savarin brie from Normandy which has the consistency of triple cream. 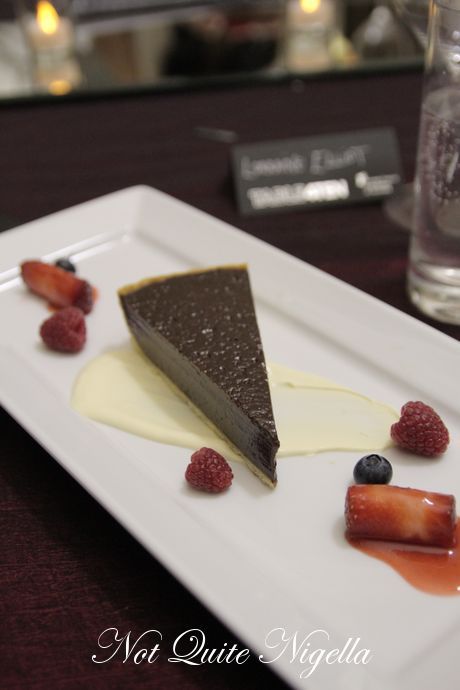 Full disclosure here Dear Reader: I'm not a huge chocolate orange lover so I leave most of this behind (having hoovered up the savouries like we were trapped in a vault and the world was ending). The tart is silky smooth and I would have devoured this generous sized slice with gusto if it weren't for the orange element. The strawberries are interesting-they are shaped by passing an apple corer through a whole strawberry. Sean laughs and laments "It was a bit of a waste of strawberries as we used one per piece". 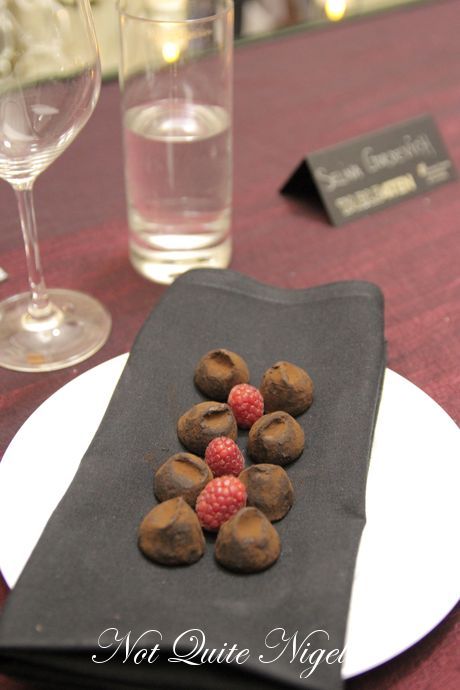 Coffee and tea is served along with some fabulous chocolate truffles. They  are very smooth and not too bitter and not too sweet. And I may or may not have eaten three of them. 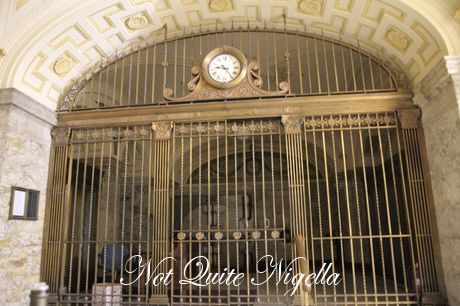 As the clock strikes 9:30pm our carriages await and we are transported to our mystery venue-the MCA (Museum of Contemporary Art)! Now ladies, if you're on the lookout, there's definitely no man shortage here.

So tell me Dear Reader, where is the most unusual place that you've dined? Or somewhere unusual where you've always wanted to dine (for me, it's probably Buckingham Palace or Graceland to try the Elvis strawberry cake! :P). 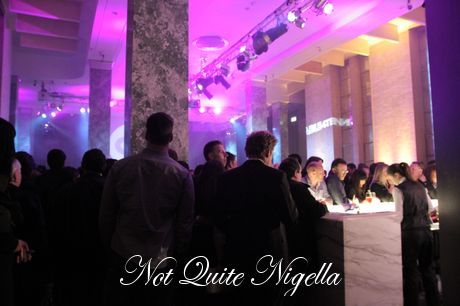 NQN dined as a guest of Robbie Robertson and GQ magazine

Table4Ten is held in Sydney, Brisbane, Tasmania and Launceston 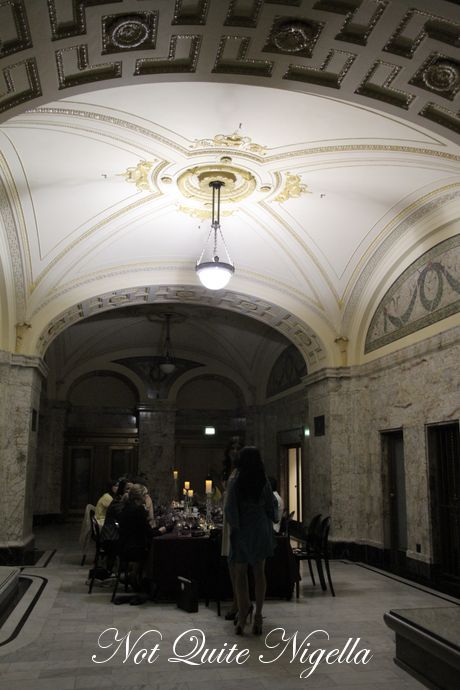