The Oz Harvest CEO Cook Off 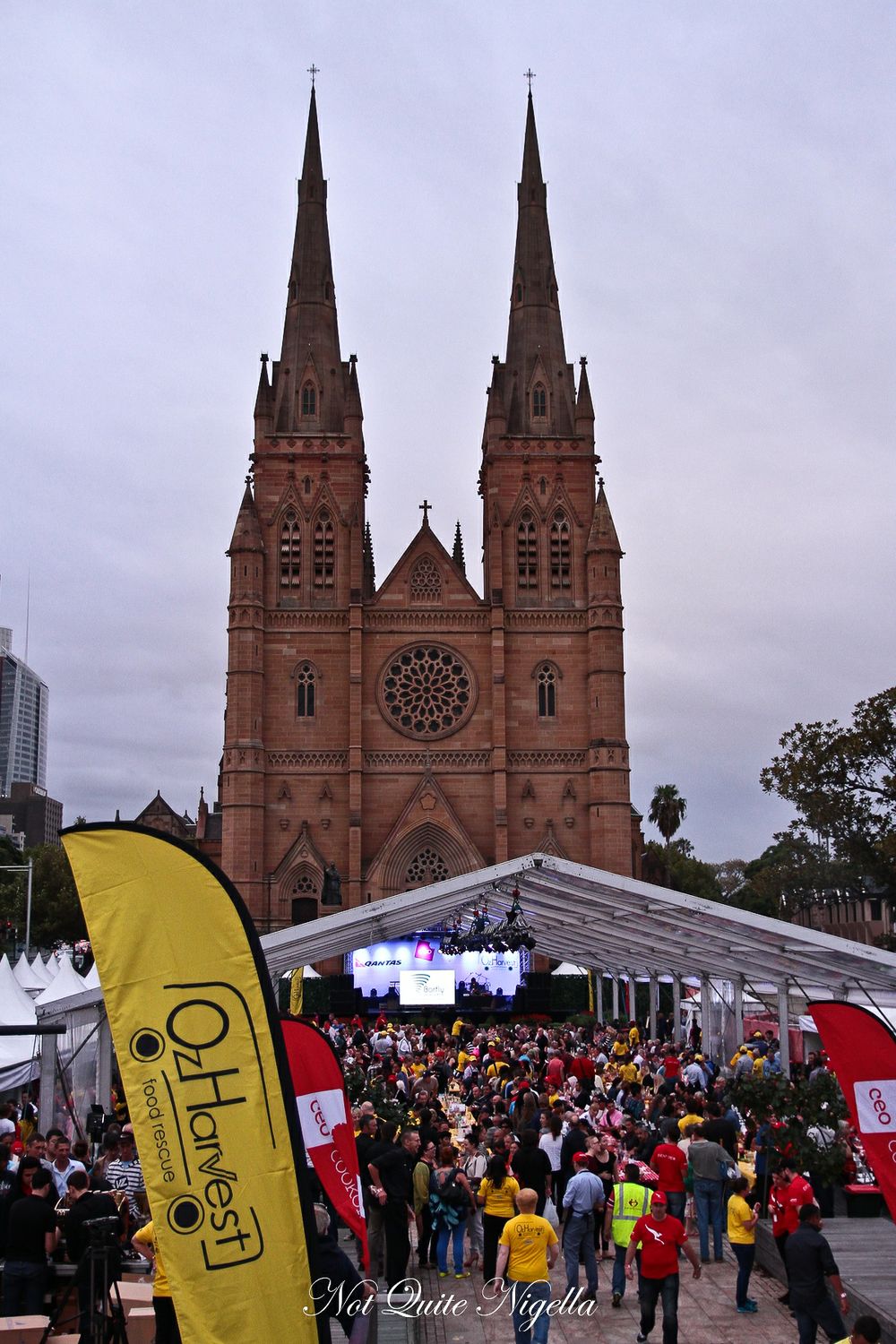 "Well errrm no, not exactly, no I'm not at all really. I'm just cooking with them tonight," I explain as I register for my spot at this year's OzHarvest CEO Cook Off. I walk through the entrance of the Oz Harvest CEO Cook Off. In its second year, it aims to raise a million dollars for the food waste charity that focuses on food security, homelessness and youth. Those unfamiliar with the not for profit charity Oz Harvest may have seen their distinctive yellow vans picking up food that would have otherwise been thrown out from manufacturers and retailers and redistributing it to charities in need. I spent an eye opening morning with them seeing how they work and it was fascinating stuff-and alarming to think that before them, all of the food that we carried in the van would have been thrown out.

Every week OzHarvest collects over 35 tonnes of excess food and delivers it to over 380 charities. 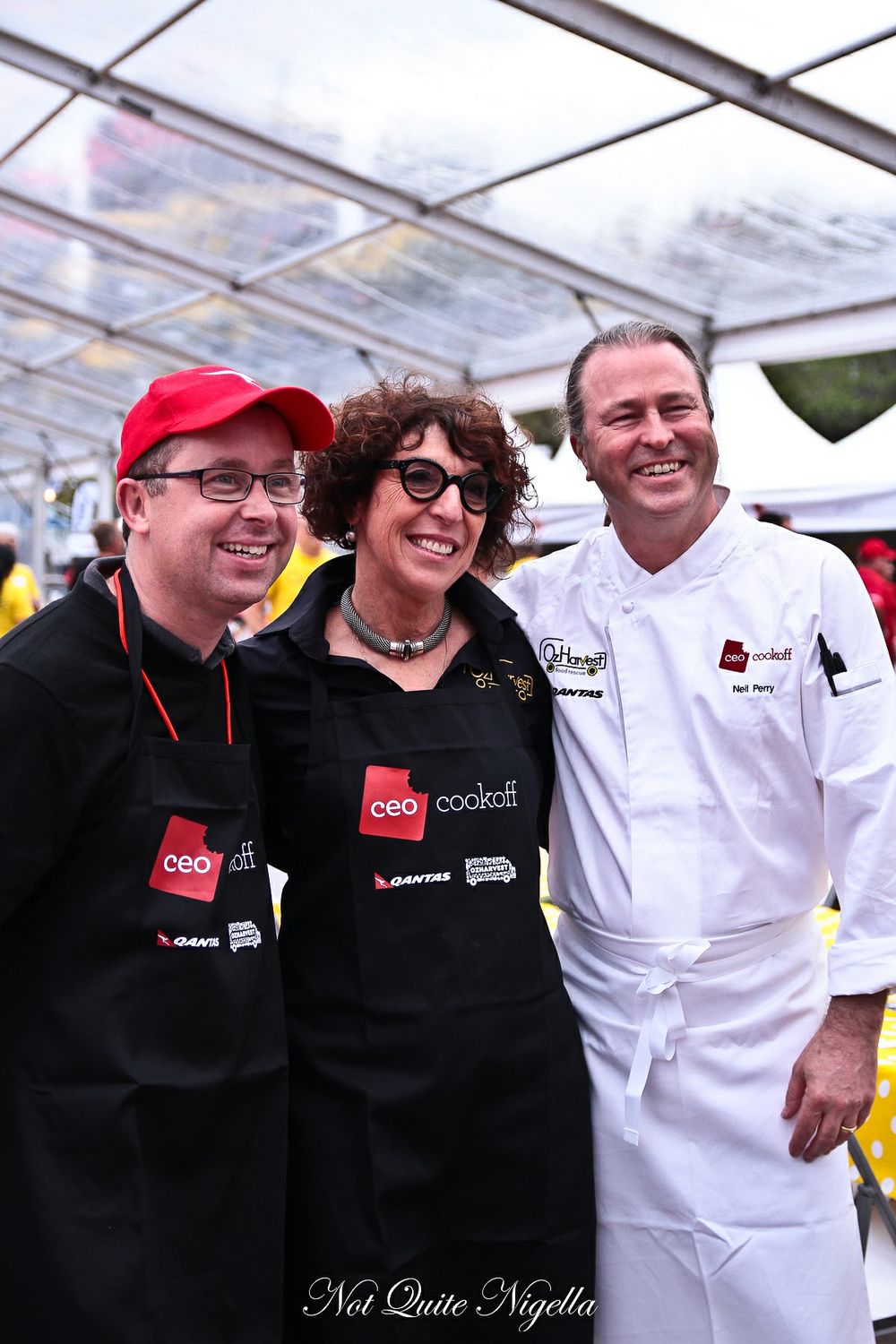 For the CEO Cook Off, OzHarvest's main sponsor partner is Qantas who paid for the marquee, stage hire, non donated food and entertainment. This ensures that every cent goes to OzHarvest, The Big Issue and ONE80TC. Other businesses that donated goods or services include Vic's Meat, Brasserie Bread, Pepe Saya butter, Maggie Beer, Murray Valley Pork, Grand Cucina, Vittoria as well as other food and beverage and audio equipment and services. Each of the thirty chefs and their teams donated their time. As if to announce their presence, the Qantas Choir starts up in their heart rousing version of 'I Still Call Australia Home' as the leaderboard tally announces that they've raised $1,000,000. 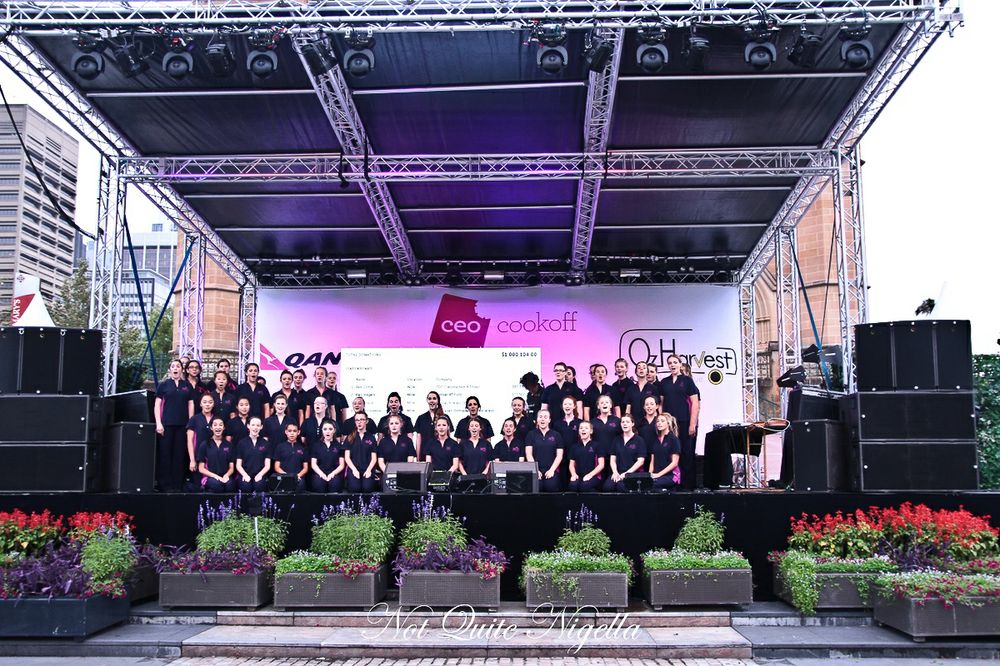 CEOs and chefs have been asked to raise money with some raising over $80,000 by themselves and their feedback after last year's event was that they wanted to do more work in the tents. We are at Cathedral Square and two rows of tents have been set up either side of the table section. Each tent has a chef and their team including the CEOs. The chefs were invited to participate by Rockpool's Neil Perry who also managed the chefs and their menus. He has been a long term supporter of OzHarvest and recalls a conversation in 2003 when Ronni Kahn asked for his opinion about whether the concept would work. "About ten years later, they have seventeen trucks and have given out millions of meals" he says. 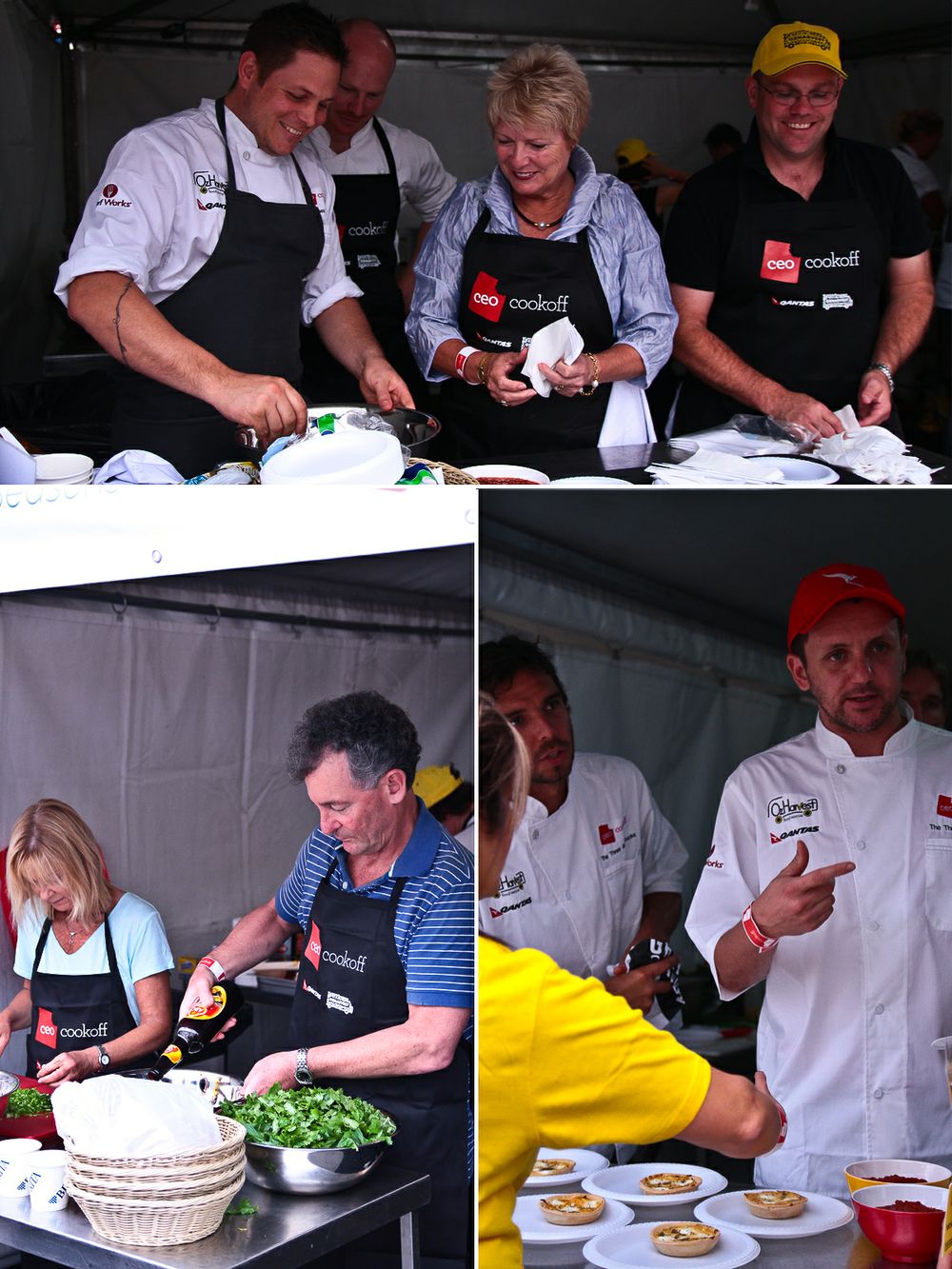 The brief to the chefs was to make simple, accessible meals as the patrons wouldn't necessarily want high end ones. As many of the guests were long term homeless, the dishes couldn't be overly spicy or sophisticated. "Food that was simple but delicious food" was the brief according to Neil. In the spirit of sustainability, they used secondary cuts such as lamb shoulder, pork neck and chicken thigh and chefs devised mains according to the protein that they were assigned.

For ex Masterchef Alumni Justine Schofield, "It was an absolute honour to be invited a second time round to the Oz Harvest and Qantas CEO cook-off. So much money was raised for this great cause and to be able to cook a feast for many homeless Sydney folk, well it meant a great deal to me. At the 2012 Oz Harvest Cook-Off I cooked chilli cheese steak sandwiches. They were a massive hit so I wanted to keep it very simple again this year but of course providing heaps of flavour. I did pulled lamb burritos with tomato and turmeric rice. Our table were ecstatic so it was a success all round." 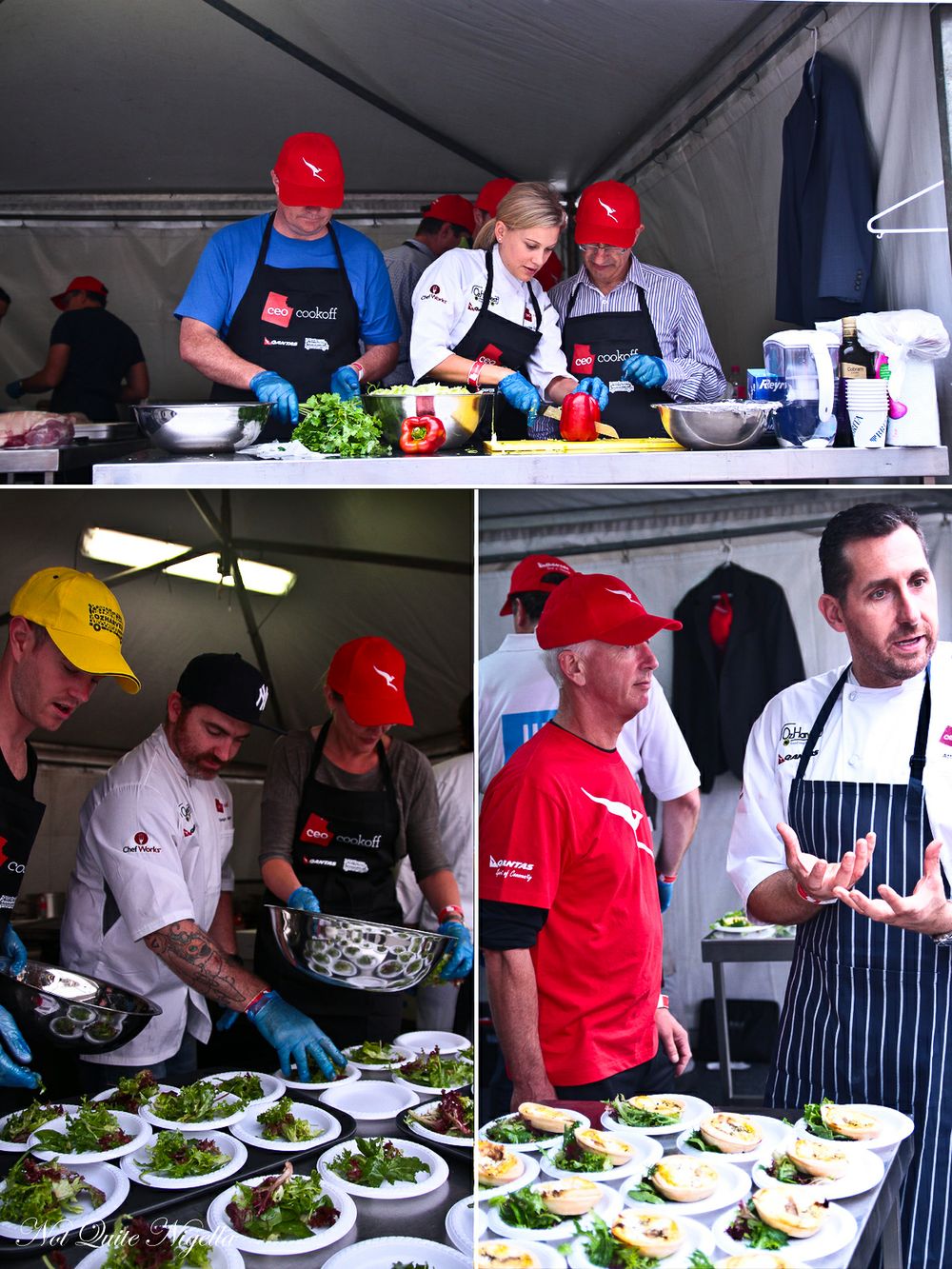 Each group make a three course meal consisting of entree, main and dessert in their own style and serve it to a table that they are assigned. They make thirty portions of each. Each course is brought out and served by the CEOs. The tart for the entree was from Simmone Logue and the dessert tart from Brasserie Bread while mains were the chef's own choice. 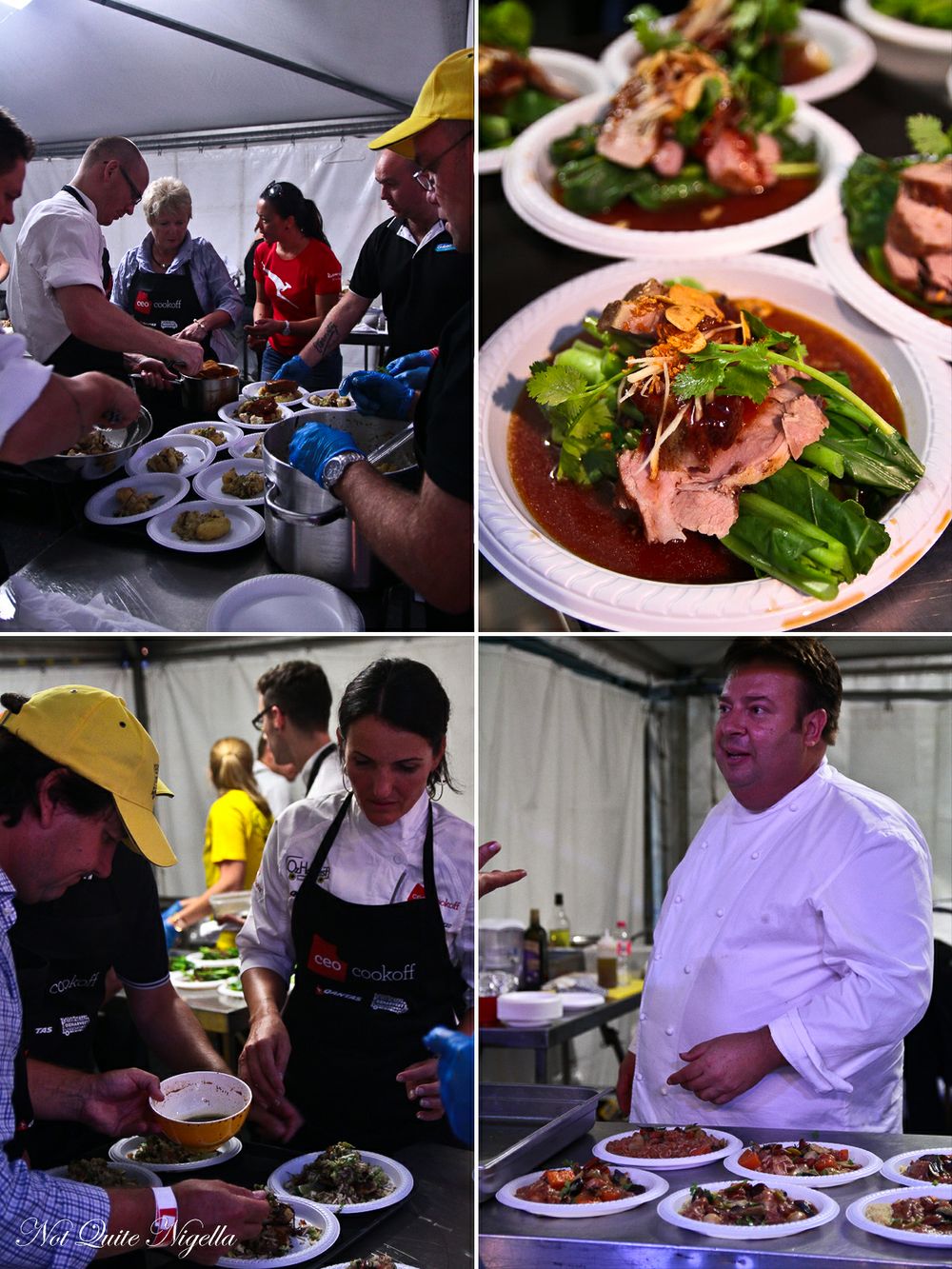 Clockwise from top left: CEO volunteers and chefs, one of the main dishes, Peter Gilmore from Quay and Dominique Rizzo from Pure Food Cooking

I'm with one of my favourite restaurants Hartsyard and husband and wife team Naomi Hart and Gregory Llewellyn are busy at work. Involved are some of Sydney's most notable restaurants with their respective chefs toiling away in the tents. It's good weather, a light sprinkle but that doesn't bother anyone and the mood is upbeat and jovial. 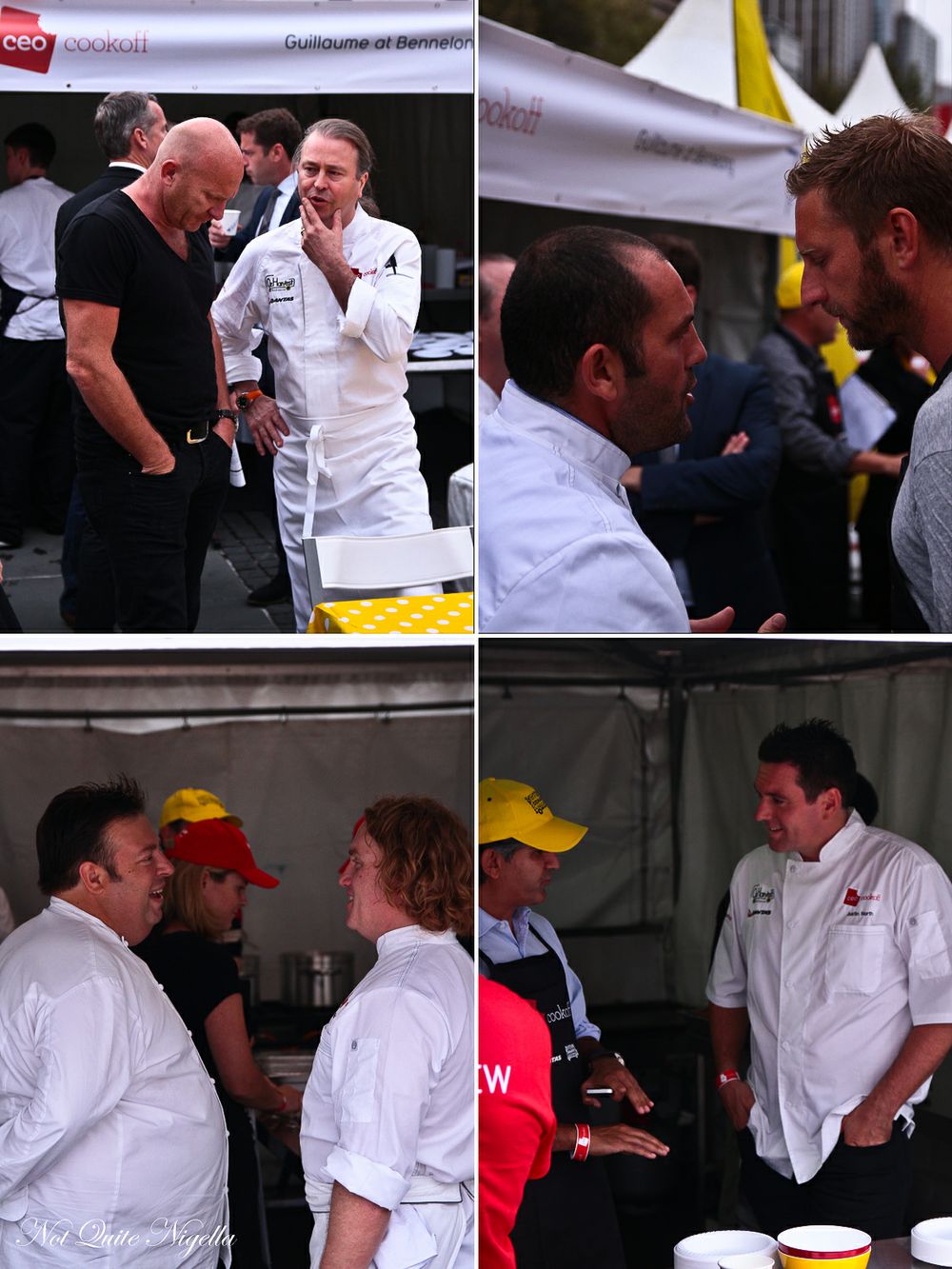 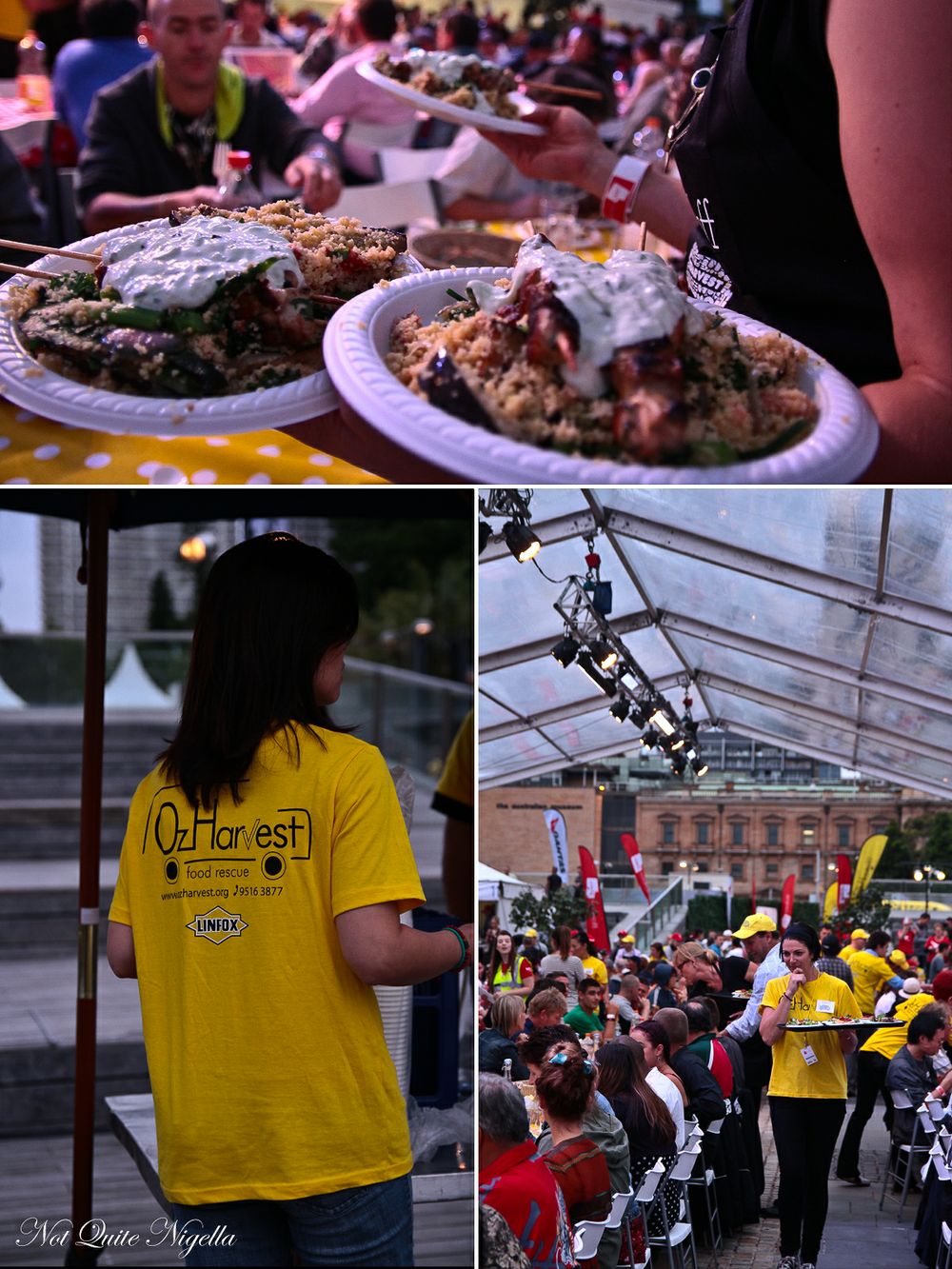 In our tent is Lynn from Ernst and Young, Vittoria from BankWest and Michael from Mindsense. They've all got their heads down and are busy chopping herbs while a pot of potatoes boil. I don an apron and cap and get to halving the potatoes and frying them until golden. I wondered what CEOs would be like outside of their usual environment-would they get to work or would they try and delegate? Interestingly, both Lynn and Vittoria don't cook much at home and leave it to their husbands to cook. Nevertheless, they all work hard and keep focused on the task at hand and aren't distracted by the crowds or entertainment. In fact the only suggestion from the CEOs at last year's event was that they have more tasks to do as they wanted to really get involved. 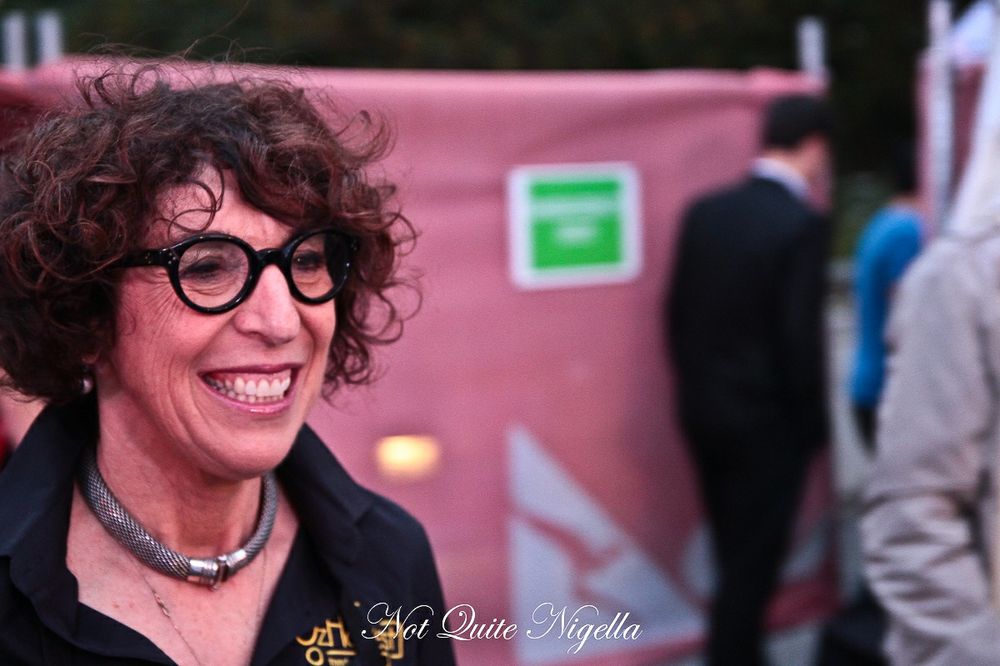 Charities in Sydney were given tokens to hand out to their patrons. Around 7:30pm the guests arrive and everyone settles into the long banquet tables. The belle of the ball is Ronni Kahn the founder of OzHarvest whose charity now helps people in Sydney, Newcastle, Adelaide and Brisbane. Ronni herself has helped to change legislation around Australia so that charities that donate food to others are protected from liability. 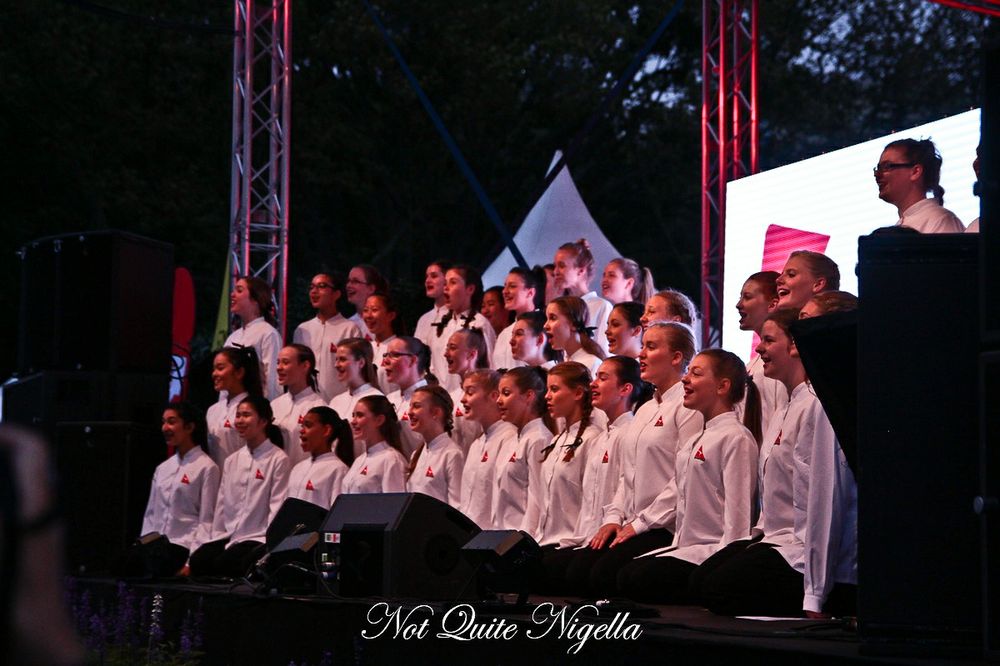 The entrees are plated up and go out to the diners and then there is a break with speeches after which mains are served. The CEOs emerge from the tents with trays of food and hand out the plates to all of the diners. They also collect plates from diners once they are finished and dispose of them.

And to give you an idea of what was served up the menu at Hartsyard was hot smoked lamb shoulder for main with golden potatoes salad and freshly shucked corn. Rockpool's offering was a hamburger and Quay's was Moroccan style chicken with cous cous. Some chefs had similar meals to what is on offer at their restaurants with Aria serving up the Moran Family lamb with hummus, mint salsa and chickpeas and Miguel Maestre serving up his signature paella in a chicken and chorizo version. 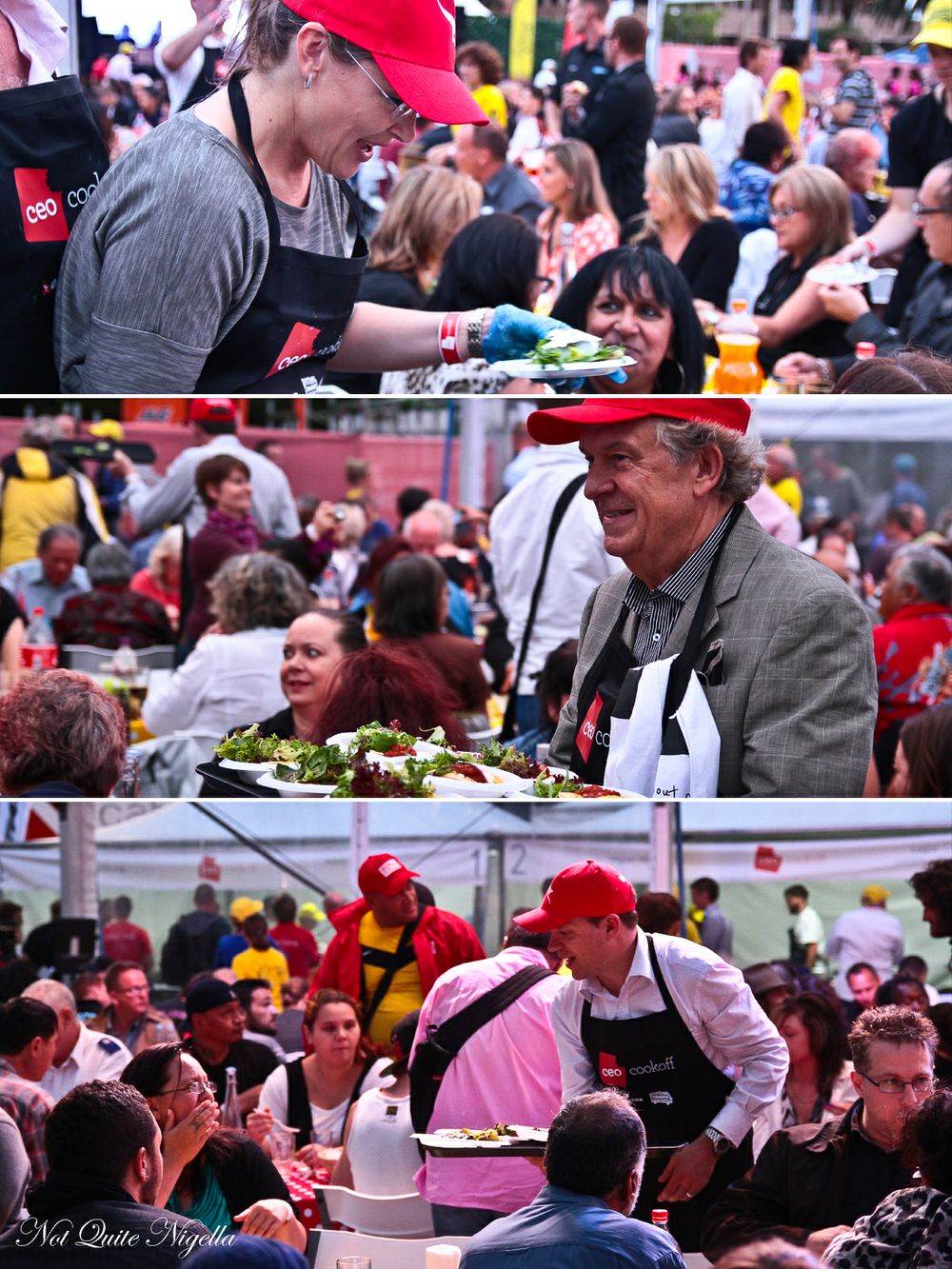 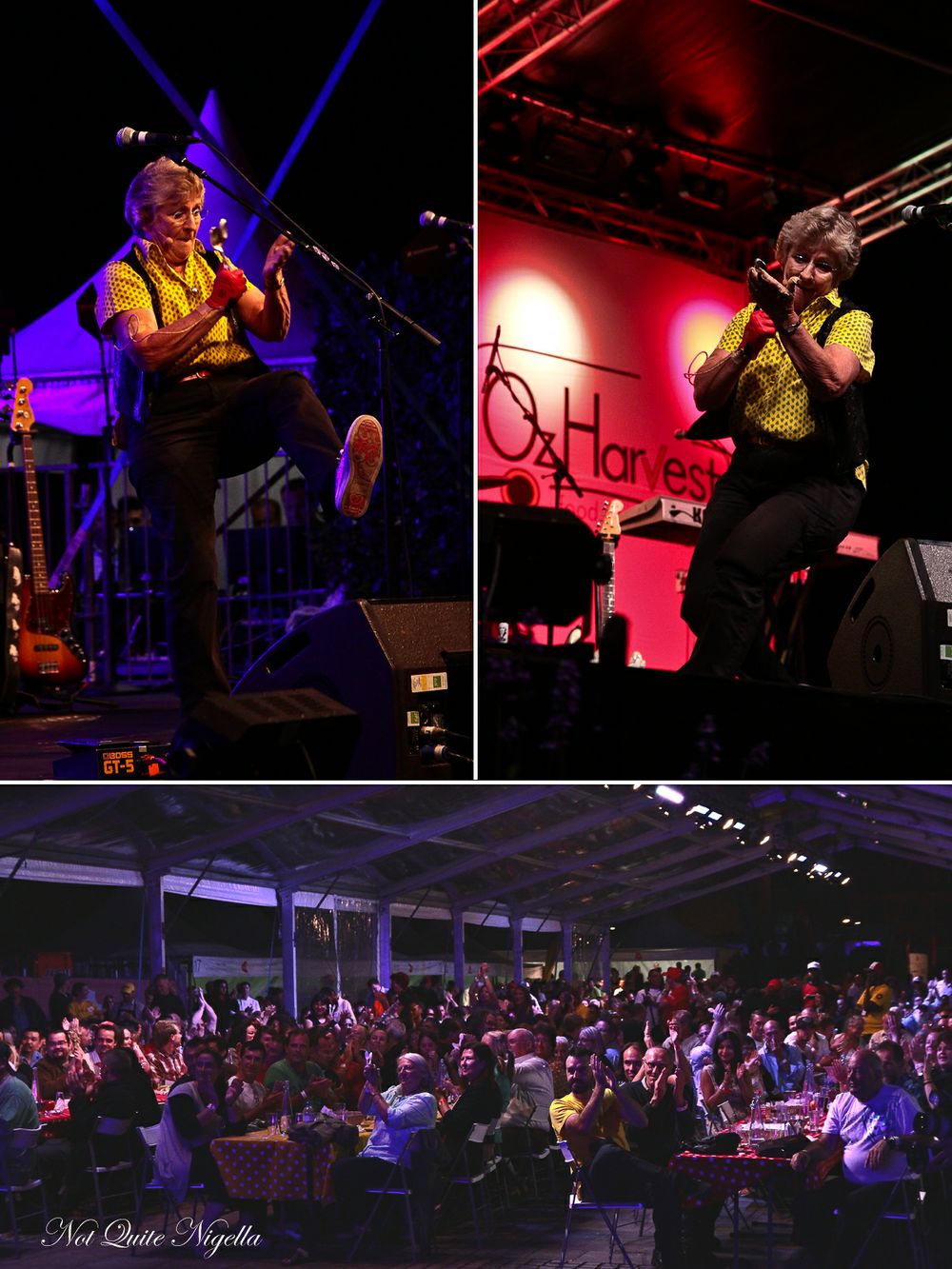 Entertainment is provided by Deb Spoons, The Spoon Lady who warms up the crowd with her quirky routine playing metal spoons and they get into the spirit by using their plastic spoons to echo back a spoon patter. Deb was on Australia's Got Talent and her routine consists of crowd pleasers and her finale segues from Chopsticks to a rousing, spoon thwacking version of Black Betty. 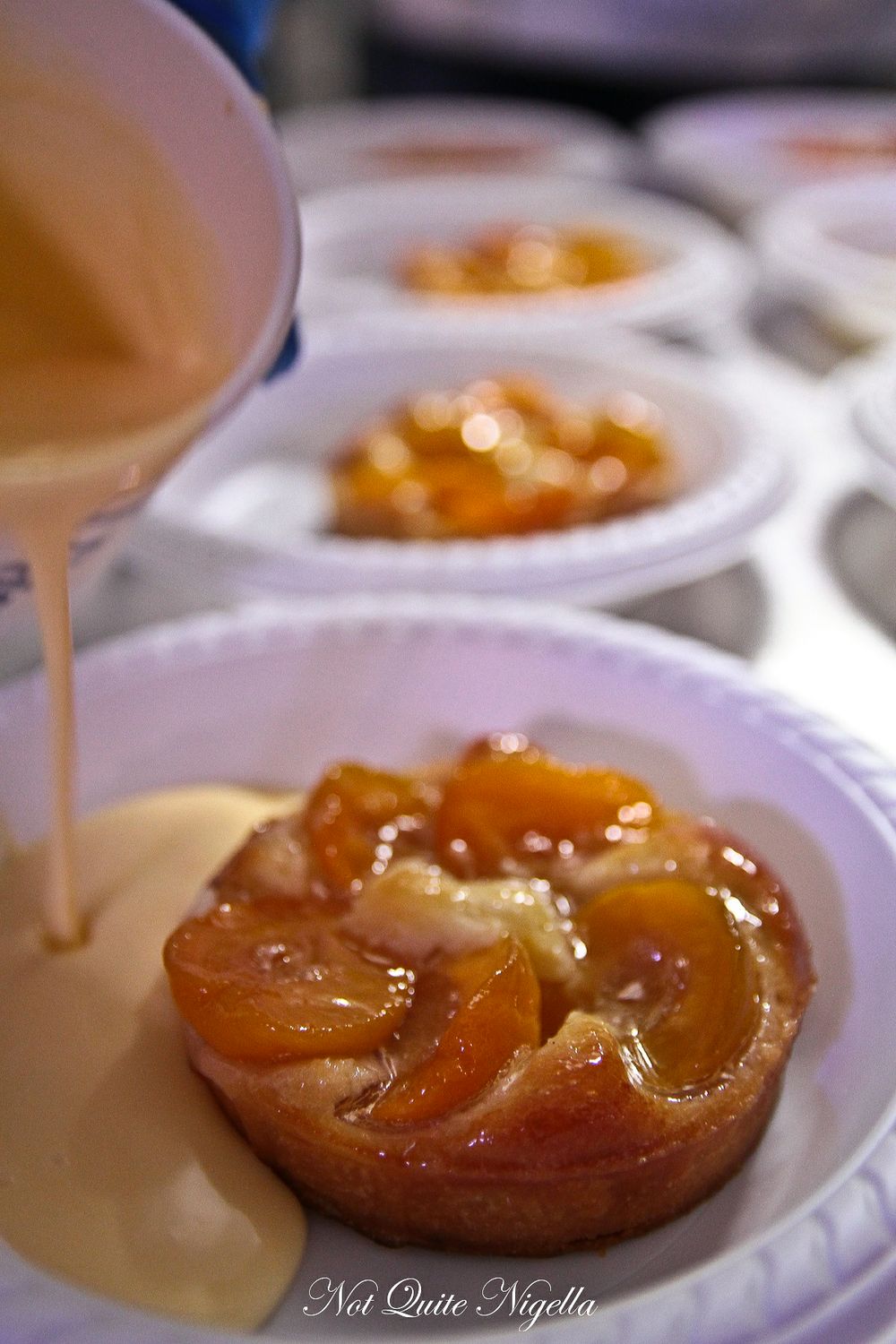 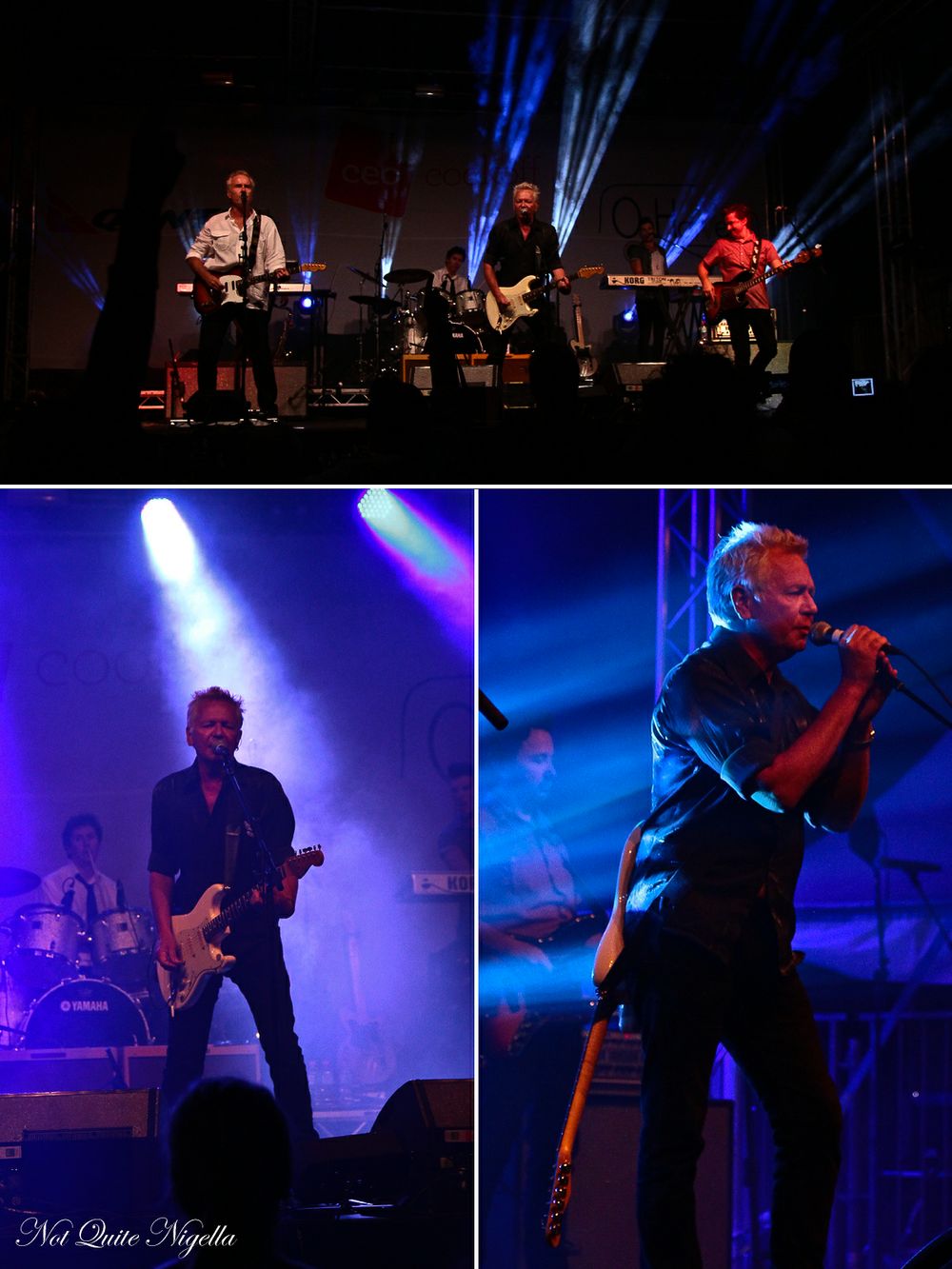 Dessert is served and then there's a short pause before Australian band Icehouse plays a set list of their hits from the past few decades. Even though the rain is slightly heavier, it's hard to dampen the enthusiasm of the crowd. Some dance up the front while others sit at their table enjoying the music. A gentleman combs his beard and comes up to congratulate a chef on the meal and asks him about cooking tips. As guests leave, they're given goodie bags containing food and other practical items that they can use.

At the end of the evening, $1,018,069 was raised and using that, they will be able to feed at least one and a half million more meals to those in need.

So tell me Dear Reader, do you support a charity and if so, which one? And are you concerned about food waste? 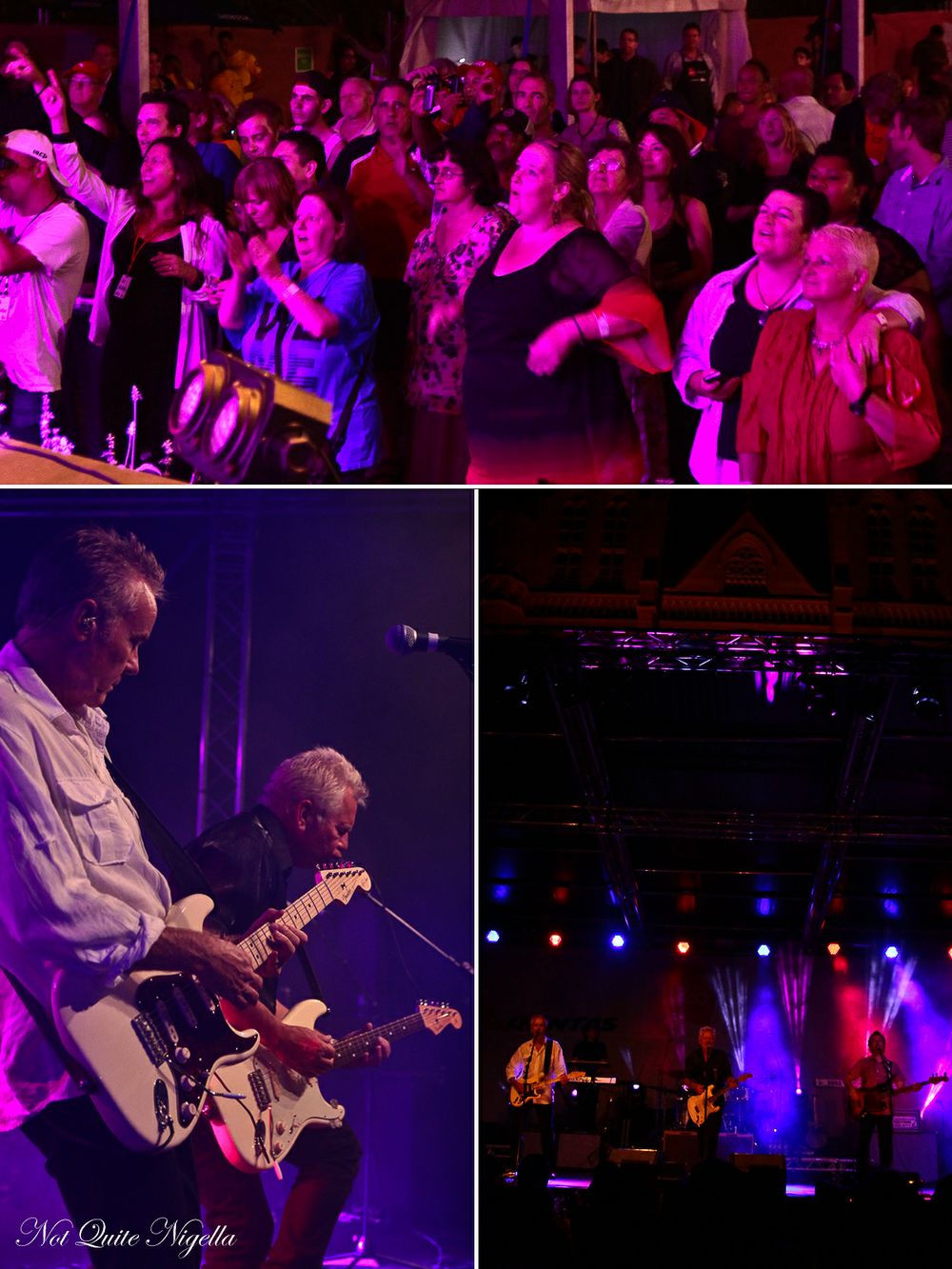 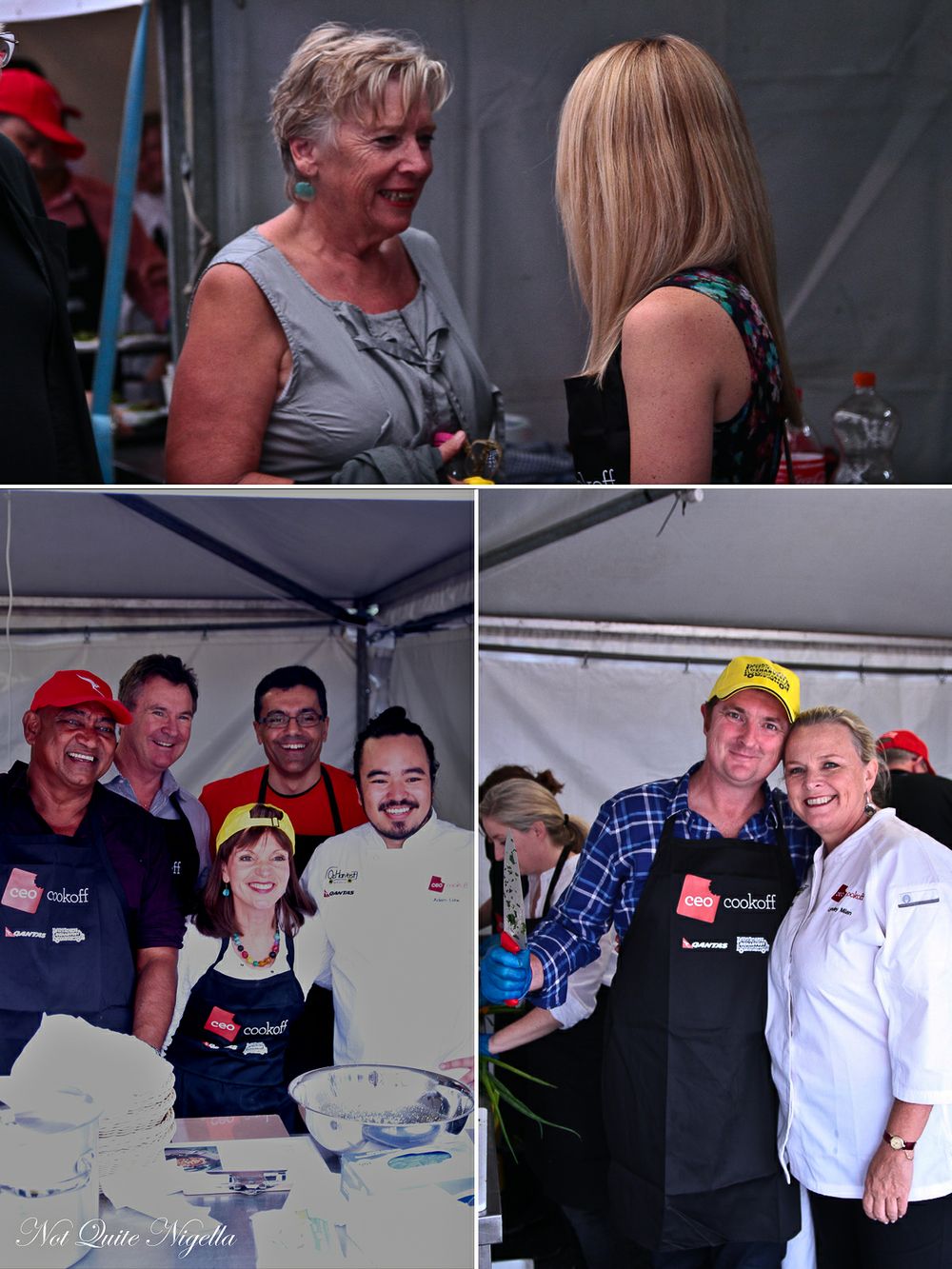