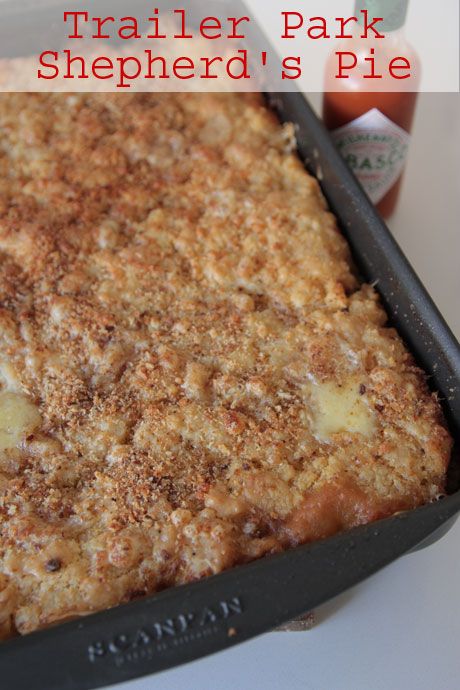 I was rushing around this November. So much so that I literally half lost my mind. I turned up at a facial appointment on the wrong day. I knew it as soon as I arrived and the therapist who has seen me plenty of times looked at me quizzically. "I've turned up on the wrong day haven't I" I said to her and she nodded sympathetically.

During this whirlwind, I received a cookbook to review in the mail. They turn up like Santa's presents around this time of the year and I have a large stack to go through. As soon as I opened the box I laughed. "Mosh Potatoes: recipes, anecdotes and mayhem from the heavyweights of Heavy Metal". Well blow me over with a feather. This would have to be one of the most fun cookbooks I've received all year. Such was my eagerness to read it that I stowed it in my bag and read it in the taxi on the way to the facial and tweeted about it as soon as I could.

The front quote reads "Every recipe in this book is pure evil. And I mean that in the most delicious way". Looking and weighing like a large paperback,  author Steve "Buckshot" Seabury himself from a band called Motheater, curated these recipes from members of Ozzy Osbourne, Pantera, Kiss, Guns N Roses, Judas Priest, IronMaiden and Anthrax. 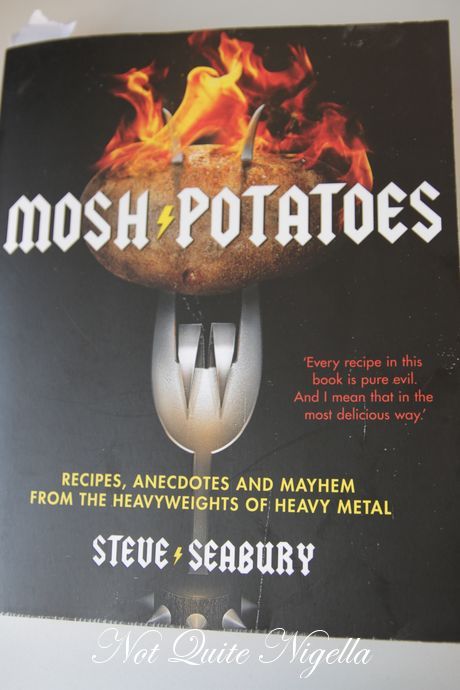 And what sort of recipes might be in here? Well they range from the immensely edible like Black Tusk grilled shrimp (from band Black Tusk, it's not a variety of shrimp), cheese and egg party puffs, to the more colourfully named Satanic Burrito and Ridiculously Delicious Beer Bratwurst. Meat is definitely represented here including the Jagermeister Roasted Lamb but then so is hommous and healthy sounding turkey gyoza in soy vinegar sauce.

My favourites for fun value were Dexter Holland from the Offspring's recipe which simply required package ramen to be made in a trash bag and Lemmy from Motorhead's Krakatoa Surprise which comes with a forewarning "In theory, this is an awesome recipe, but prepare at your own risk". It involves flour, chocolate syrup, refried beans, curry powder (1/2 pound!), a bottle of strawberry syrup and a quarter bottle of brandy (restrained given the rest). Everything but the strawberry syrup and brandy is piled into a mountain shape, then the strawberry syrup poured over it then the brandy and finally a match is struck to set it on fire. The instructions read "Eat while still burning. SURPRISE!" 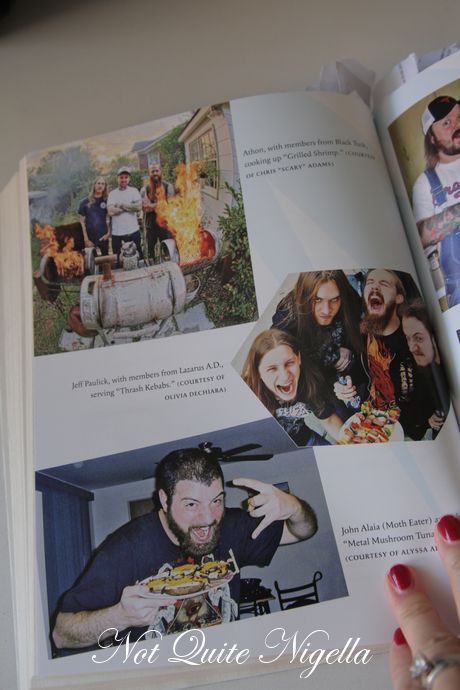 Of course where is heavy metal without groupies and the associated food like "Hot Rod Penis Loaf by Gen from the Genitorturers. She explains that she did try to make these in a female appendage version aka vulva loaf but the end result proved disturbing in appearance  as the juices gathered in the inner recesses resembled a venereal disease! And continuing on the theme are Shrimp Cl*ts On Grit Cakes where Baslac from GWAR says "...my favourite Souther meal is a bog pile o' shrimp 'n' grits. What makes my version about a hundred times better than all the others out there is that I turn my prawns into a plate of little vaginas just begging you to gobble them up...This is the second best things you will ever put in your mouth!".  Mmmkay, if you say so!

There is also Weeping Brown eye Chiili by a member of Cattle Decapitation and Garbage Plate which features 8 frozen beef patties, 4 cups frozen hash browns, 8 slices of American cheese and 4 cups of cold baked beans or macaroni salad and 40 salted butter pats, unwrapped (a hangover from cooking in a hotel room I guess!) paired with a 16 ingredients hot sauce made from scratch. 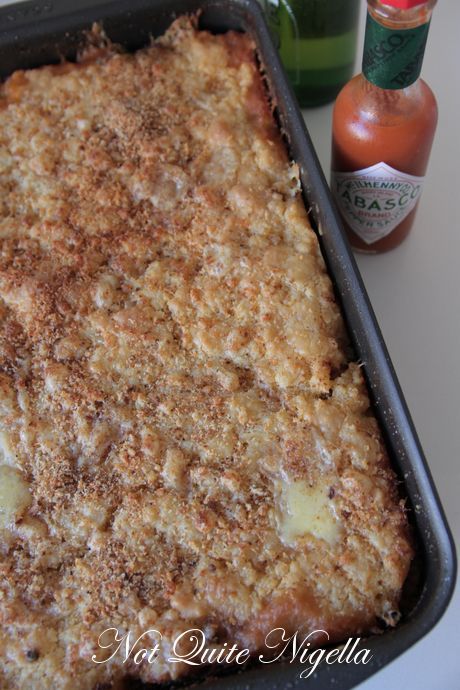 And desserts are not forgotten-there are regular sounding desserts such as mud cakes, crumbles, pecan pie, Oreo pie as well as a "highly doubtful teacake with very suspicious creme" by Emilie Autumn. The "very doubtful" part is the use of fresh lavender which is not quite the type of ingredient you would expect in a heavy metal cookbook (and they use organic eggs too).

As it is a US cookbook and because these guys are on the road, there is quite a bit of use of prepackaged convenience products or brands that we can't get here but there are a good number of recipes that use fresh, regular food (40 pats of butter notwithstanding ;) ). And ok this is mostly a cookbook for guys (the shrimp dish might have given you that impression already ;) ) but quite frankly I love any book that encourages a man to cook and it is a lot of fun with some actual, real recipes. And if this isn't the perfect cookbook to give your Heavy Metal Mama or Man or just regular guy, then I don't know what is. 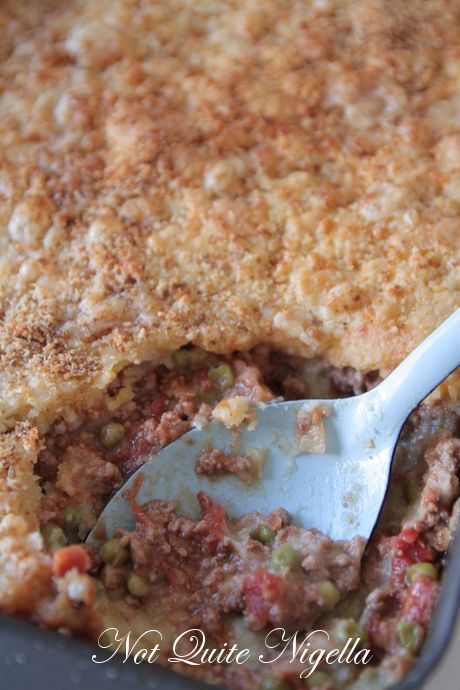 So reading this in a taxi is likely to have your taxi driver cast you some highly doubtful looks. "It's a heavy metal cookbook" I said to him by way of explanation. His expression indicated to me that I was probably speaking alien. I rushed home and decided to cook the Trailer Park Shepherd's Pie by John Bush from Armored Saint. Mainly because I had most of the ingredients to hand and it didn't specify products that I couldn't get here. Plus it's called Trailer Park and that's got to be fun right? 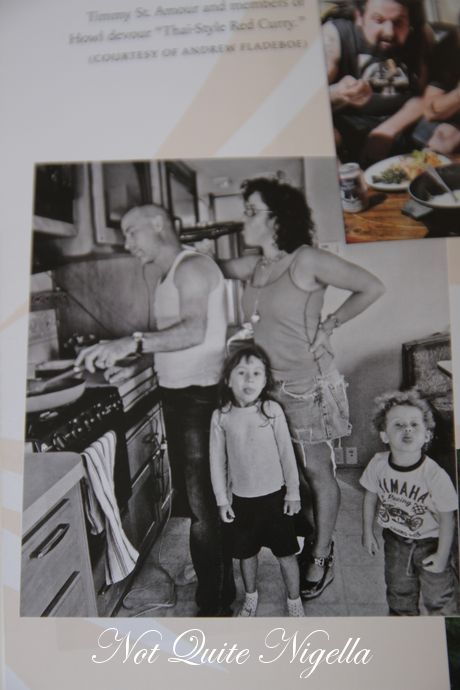 John Bush from Armoured Saint. I am guessing in his trailer home!

I set about making it one afternoon and skimming through the ingredients and recipe, my first thought was firstly pleasantly surprised that the recipe did not involve instant mash or the parmesan cheese that comes in a green canister. He also has the right technique as far as mashed potatoes goes telling people to warm the milk before adding it to the mash. It takes quite a while in preparation, at least 1 hour and then close to an hour cooking. Was it worth it? Hell yeah! 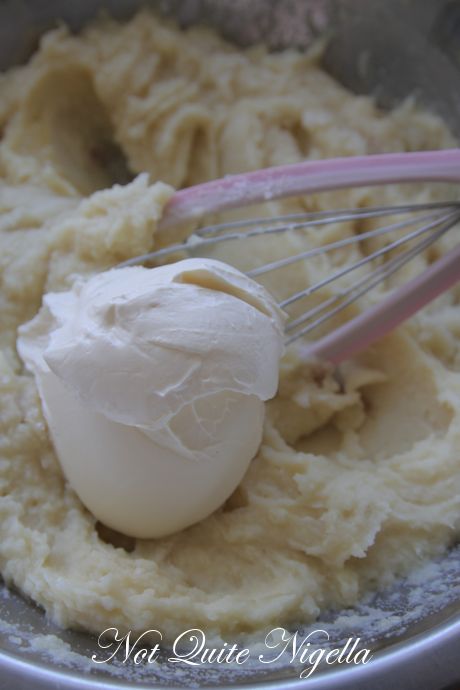 The mash was creamy and moreish with the addition of sour cream (you could even add a few tablespoons of chopped fresh chives for that added baked potato with sour cream flavour). The meat and peas were delicious and I always think that beer pairs well with beef and the scone or biscuit topping is divine, like a crunchy, cheesy cornbread topping. The quantity it makes is quite large too-I assume enough to feed a heavy metal band and any assorted groupies.

And thanks to the nice people at Allen & Unwin, we are giving away five copies to some lucky Not Quite Nigella readers! *For a chance to win a copy, all you have to do is tell me what is your favourite band and why. Simply add your answer as a comment to the story. The competition ends at Midnight AEST 15th December, 2010. You can enter this once daily. This competition is open to anyone in Australia.*

For scone or "biscuit" topping if you aren't using a pre made biscuit mix. Recipe from the QVB tea room. 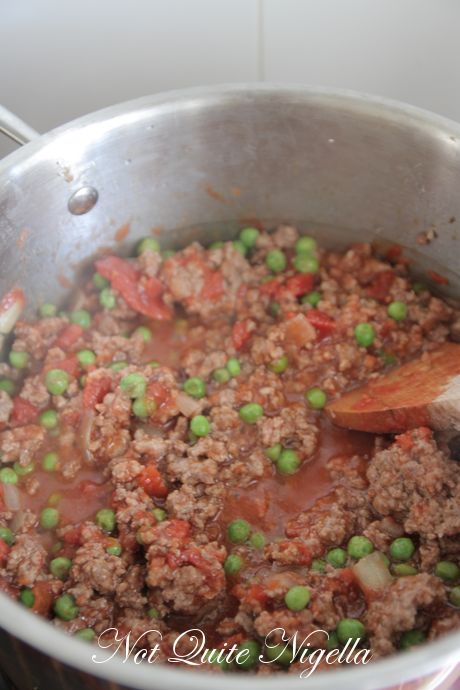 Saute the onion in 2 tablespoons of the butter. Add the ground beef and brown. Then add the tomato sauce, vegetables and 1/4 cup of the beer (only 1/4 cup, not the whole thing!). Add Tabasco salt and pepper to taste.

Peel and slice the potatoes 1/4 inch thick. Cook in boiling, salted water for approximately 15 minutes until fork tender. Mash the potatoes or pass it through a potato ricer until moderately smooth. Heat and add 1/2 cup of the milk, following 1 whole stick of butter (120grams or 4 tablespoons), the sour cream and the mozzarella. Add salt, pepper and garlic and combine. If it is too thick, add more hot milk.

Combine the biscuit mix and the remaining 1 cup of milk. The mix should be thinner than normal biscuit mix but not runny.

OR if you are using the recipe above:

Crumb together all dry ingredients with butter. Use buttermilk and water to combine.

Preheat oven to 350F/180C. Or as the recipe says "Light the pilot on the trailer home oven. 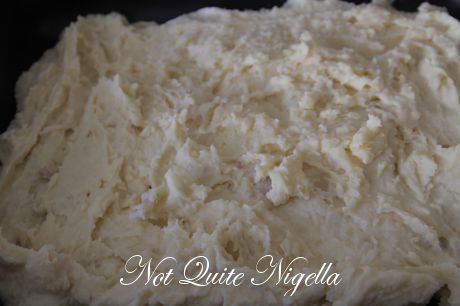 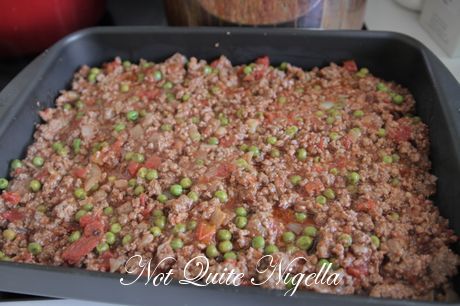 Spray a 9x13inch baking pan or similar casserole with non stick cooking spray. Layer with the mashed potatoes. Then spread the meat vegetables on top. Then lastly spread over with the biscuit batter over the meat. 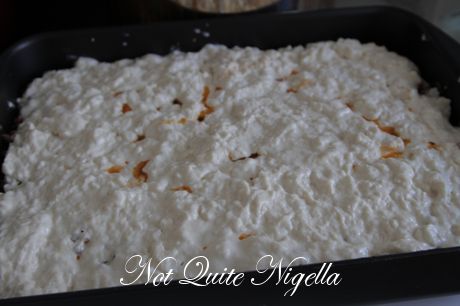 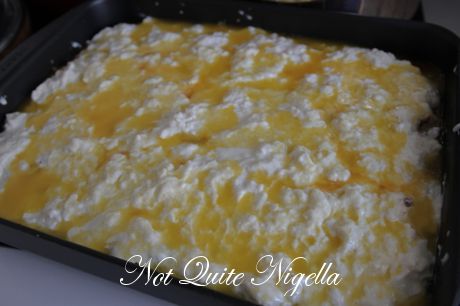 Paula Deen would be so proud

Melt the remaining four tablespoons/60g/1/2 stick of butter and drizzle over the top. Yes really, trust me, it will be good. And you will feel like Paula Deen too.

Bake for 30-40 minutes until the top is golden brown. 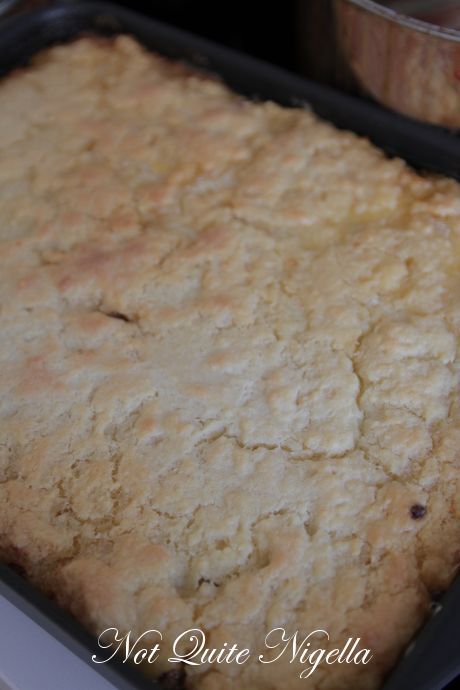 Meanwhile combine the parmesan cheese with the breadcrumbs and once the time is up remove from the oven and sprinkle this  over the golden brown top and return to the oven for another five minutes untilt he cheese is melted and starting to brown and crisp.

If sober, drink the remainder of the beer. 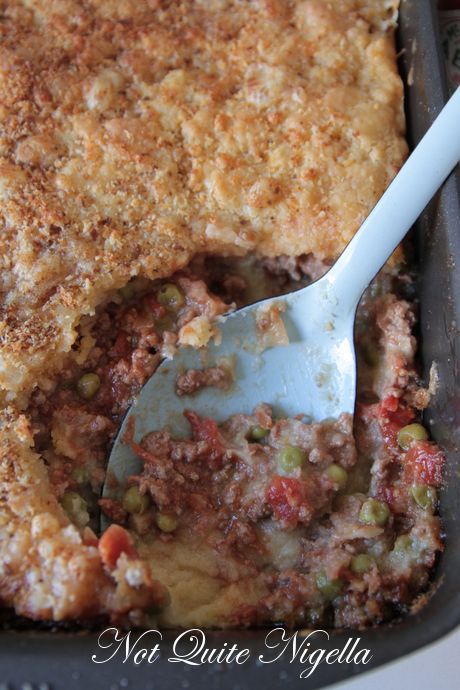