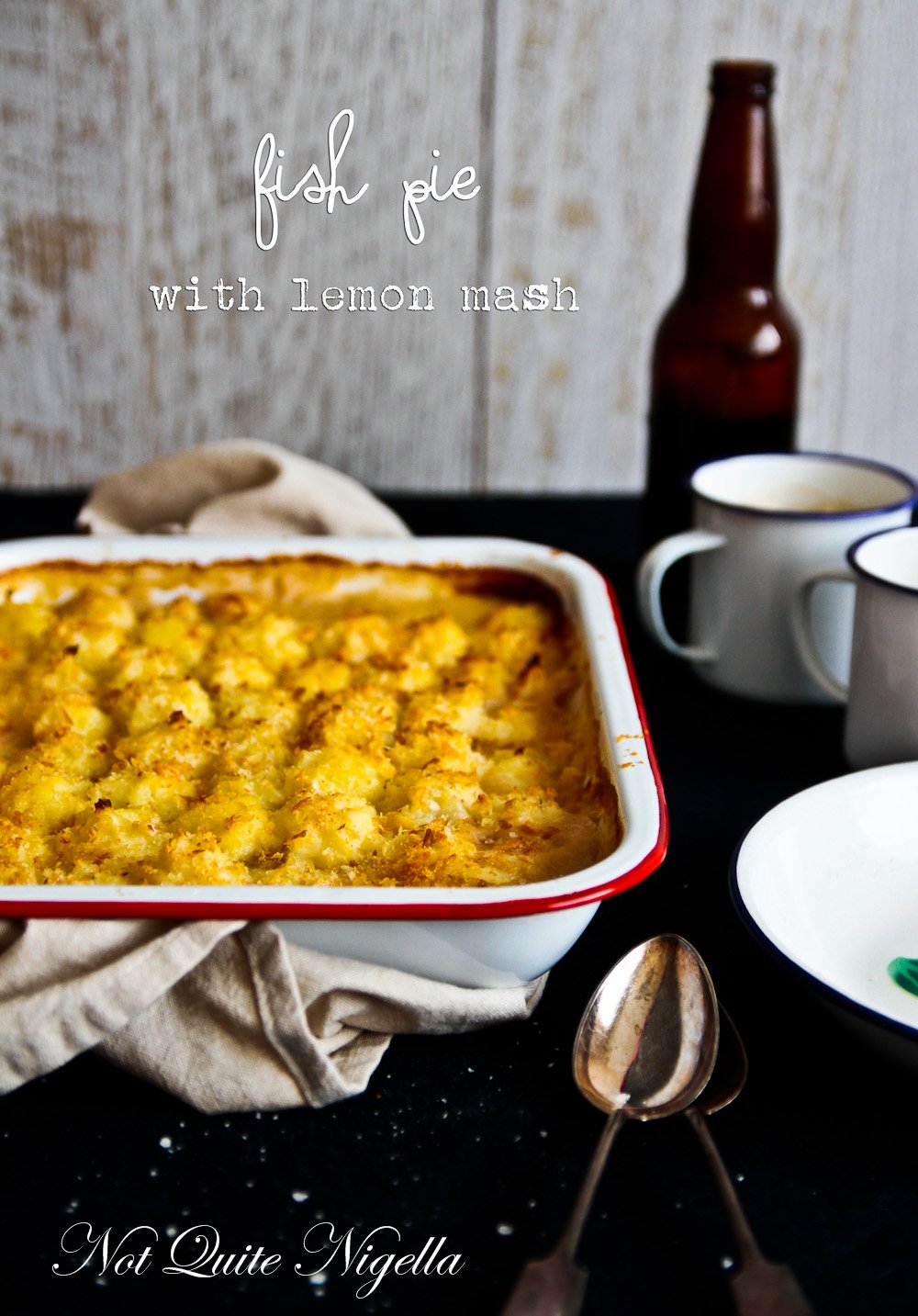 I was having one of those days. The phone had rung countless number of times, I'd missed every call and by noon I was still in my pyjamas. The rain seemed relentless and I could see the work piling up along with the laundry. Everything was taking twice the amount of time and I needed to make dinner. By 3pm to be exact because of course now that winter is fast approaching, it gets dark so early and photographing something after 3pm means long shadows and low light.

The potatoes sat mashed. I had steamed them earlier in the day and clear forgot about them. Thankfully that meant that they had cooled quite nicely and were easy to handle. After pushing them through a ricer (which allowed me to get rid of some frustrations) I made a lemon version of mashed potato. Sticking a finger into the mix, I perked up. It was delicious. 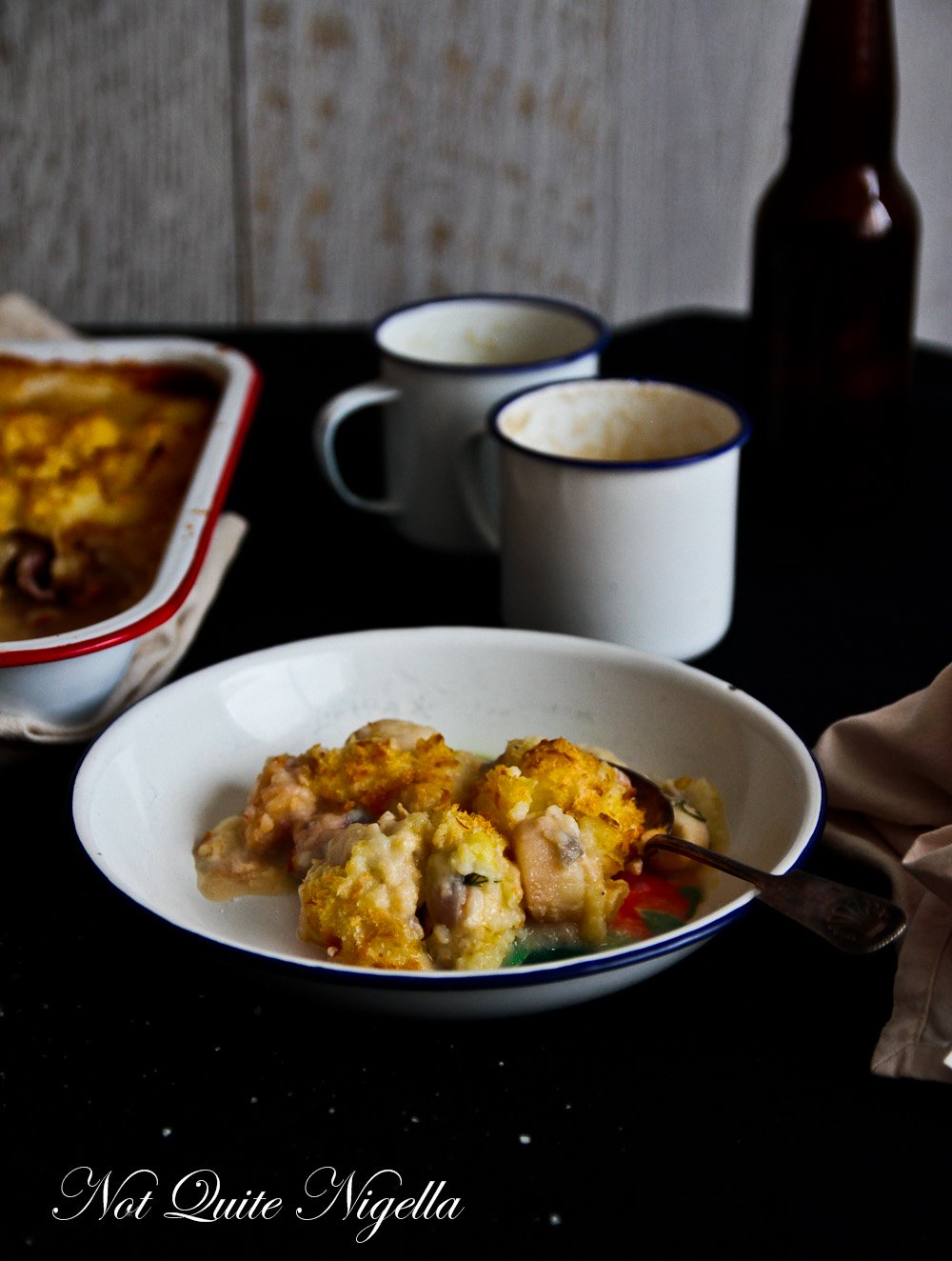 This fish pie is something that I've made many times before, the filling depending on what is good at the fishmonger. Mr NQN had earlier this year declared his dislike for cooked fish (who knew?) so it would be a mix of seafood and fish rather than just fish. I change the herbs according to what I have too and this version would be made with dill although you could certainly use parsley too if you have it.

I was reminded of why I love this pie so much. It makes enough to feed six people with regular appetites so that means three serves for Mr NQN. The seafood remains so succulent and juicy inside, the squid tender and never rubbery while the scallops melt in the mouth. I also love the crispy, buttery breadcrumb topping. Call me old fashioned but I love the look of star piped mashed potato. It reminds me of school lunchtime pies. The only change was the lemon mash which was such a little but impressive change to the pie. The light lemon mash suits the seafood perfectly. And by 2:30pm dinner was ready!

So tell me Dear Reader, have you ever tried lemon mash? It's delicious! And do you ever spend the whole day in your pyjamas? And do you intentionally eat fish on Fridays?

Step 1 - Make the lemon mashed potatoes. Steam or boil the potatoes until tender. Press the potatoes through a potato ricer or use a masher while hot. Add the lemon zest and juice and stir. Heat the milk and 1 tablespoon of the butter and pour over the potatoes. Stir and season with salt and pepper. Set aside. 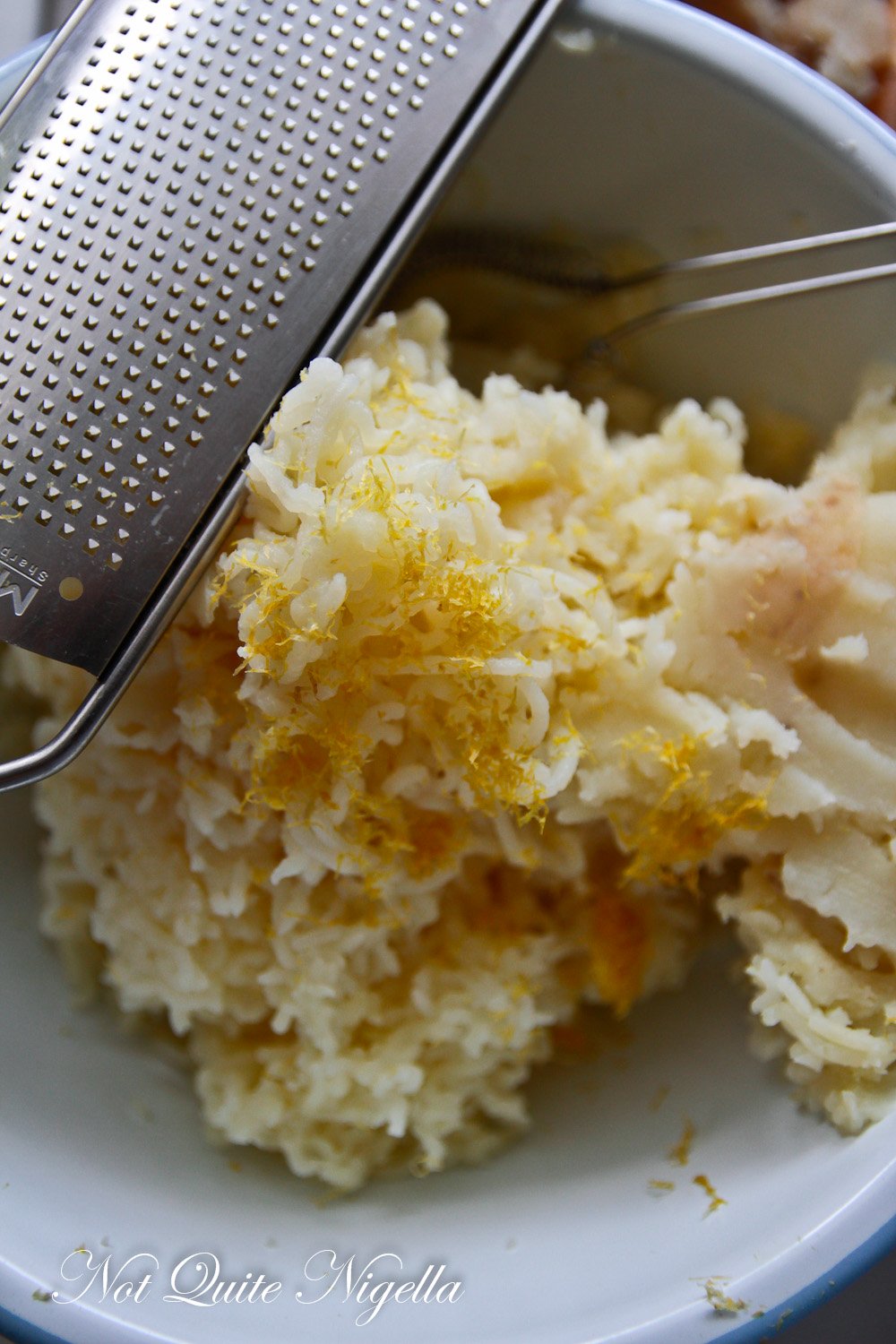 Step 2 - Heat a saucepan on medium high and add another tablespoon of butter. Fry the onion and garlic until fragrant and translucent. Then add the cream and dill and season with salt and pepper and reduce until the cream is thick and can coat the back of a spoon. 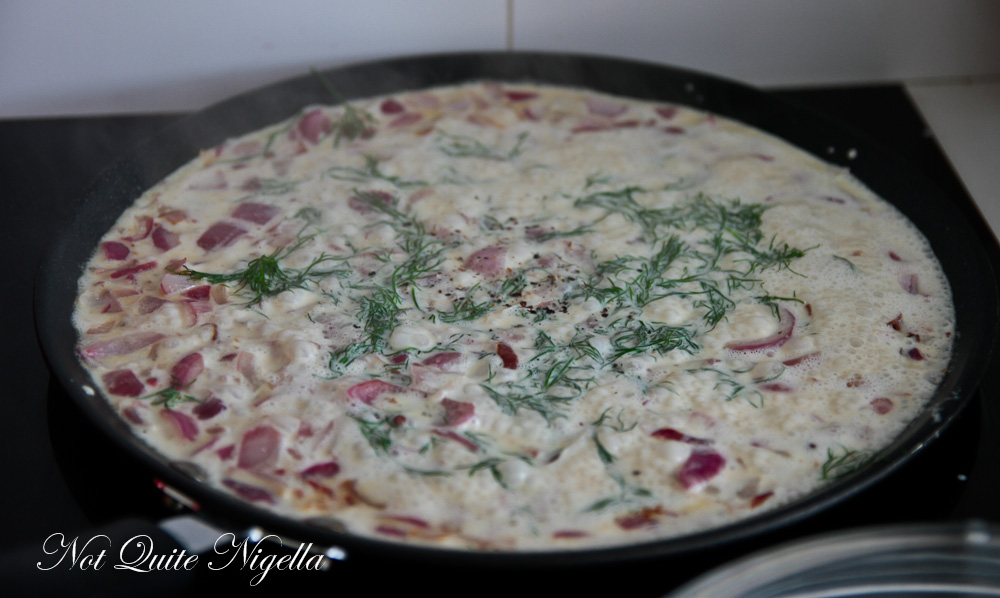 Step 3 - Preheat oven to 220C/440F. Grease a 28x21cm/11x8.4inch tray with a little butter and place the raw seafood in the tray. I used mixed seafood but if you have fish fillets, cut them into bite sized chunks. Pour the hot cream sauce over the fish. 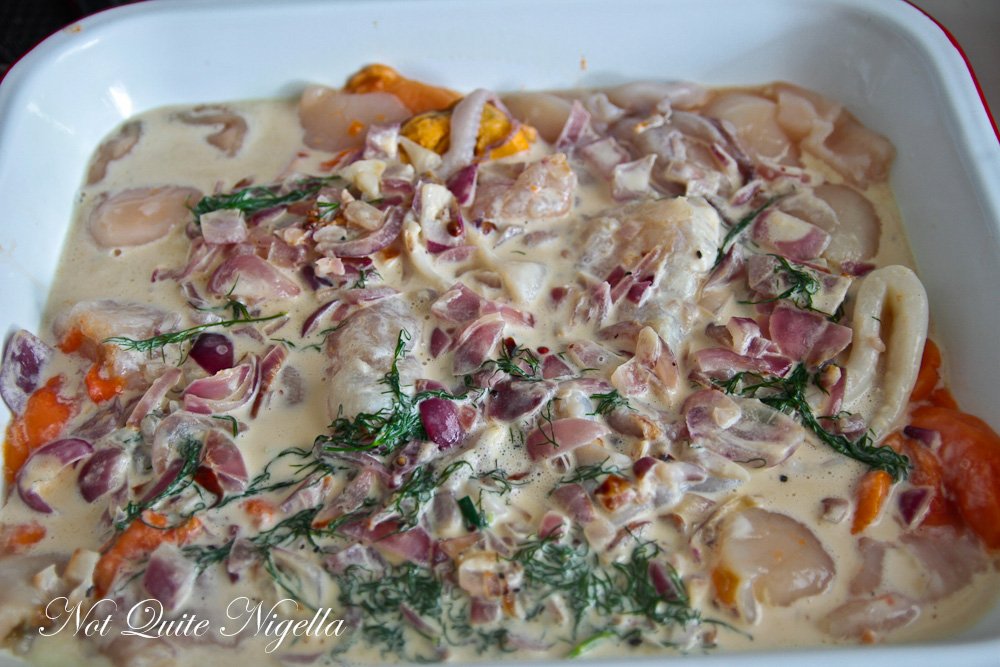 Step 4 - You can then spread or pipe the mashed potato topping on top. Sprinkle with the breadcrumbs and cut up the remaining tablespoon or so of butter and dot with small cubes of butter. Bake for 25 minutes until the potato is golden. 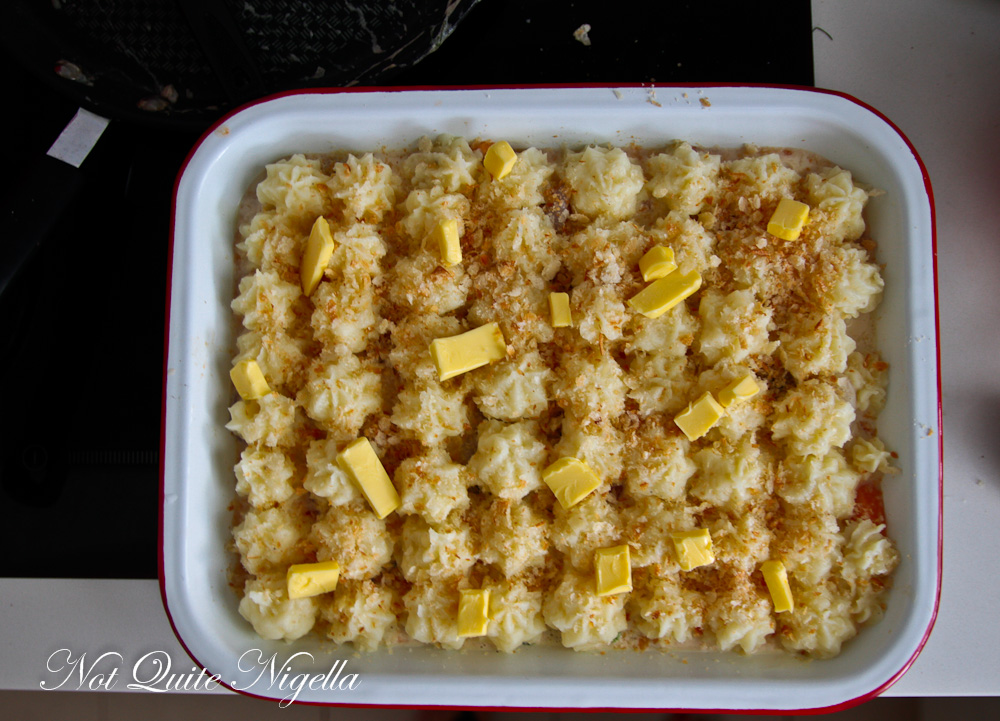