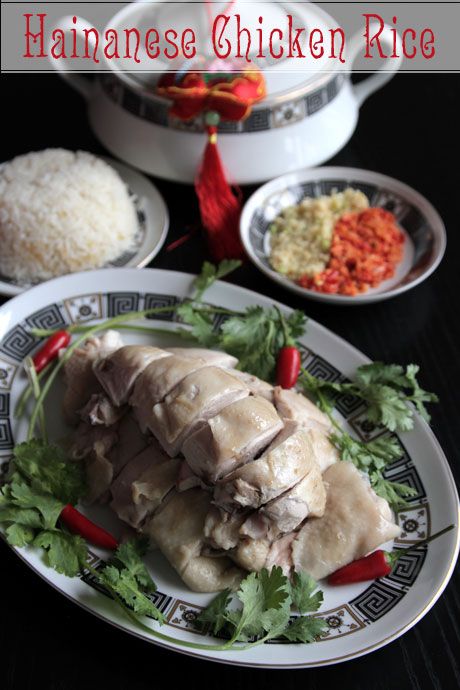 It was about six years ago. I was lying face down on a table and passing in and out of consciousness. The woman who was standing above me said:

"You've got a very nice aura around you, it's very orange and positive. That's wonderful!" she said gaily.

"Mmmmhumpphthankyoumm" I responded my voice muffled into the towels. I was enjoying my back massage so much that I was almost falling asleep. But she wanted to chat.

"Oh and by the way my husband is Chinese and I've got this wonderful recipe for chicken rice. Do you want to know the secret?"

Well having a good aura around me is one thing, that's all very nice. But knowing the secret of a good chicken rice is even better! I looked up at her eager to hear the secret.

She leaned down to me and whispered "Well the secret to a good chicken rice is cooking it very, very slowly and very, very gently. And don't let it boil!" she said with an alarmed eyebrow of caution. 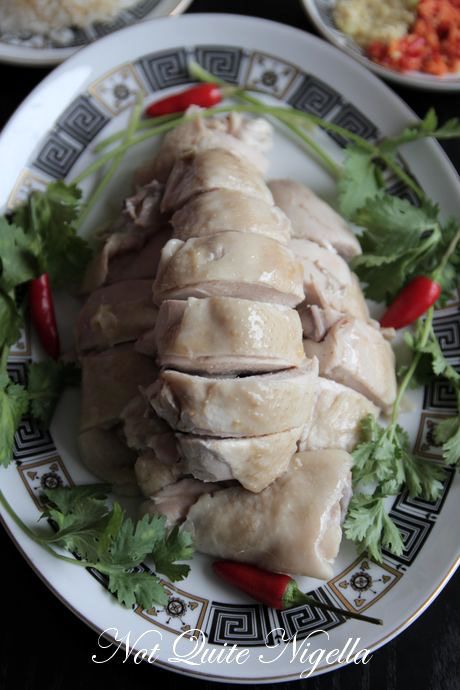 I've never forgotten her advice. Hainanese chicken rice is one of my favourite dishes of my mother's homeland, Singapore and is synonymous with Singaporean cuisine. It's what I always order when I visit there (although it has been a good fifteen years since my last visit). It is a mix of tender chicken, poached ever so lightly combined with a chicken stock, ginger and garlic infused rice, a moreish ginger and garlic dipping sauce and chilli sauce. It is my food nirvana and you can be guaranteed of at least ten minutes of silence from me while I am eating it. Plus it also has the most intriguing method of cooking!

I found this recipe on the Food Safari site on SBS and it seemed to fit my massage whisperer's code of the slow non boiling of a chicken. The chicken is ingeniously plunged into a pot of boiling water and then switched off so that it is left to cook in the hot water without stressing it or making the meat tough. When it is cooked an hour later it is dunked into an ice bath to give it a glossy sheen. This produces a tender, delectable chicken where the breast is moist. It is the perfect foil for my other favourite part-the chicken stock infused rice and the ginger dipping sauce. 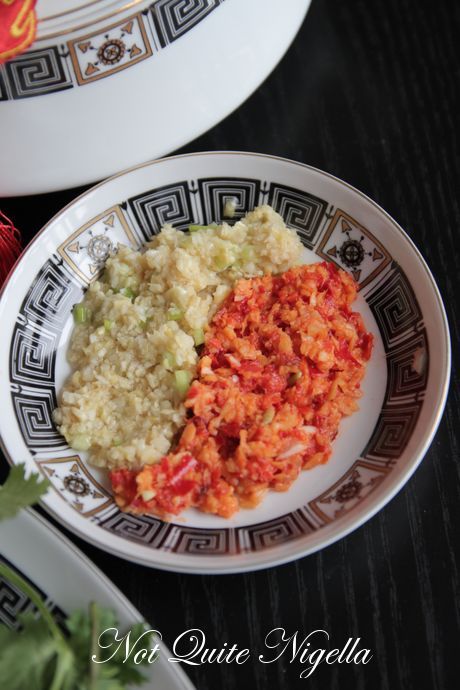 My mother and I made this one afternoon although my mother's food processor wasn't quite up to the task of processing small amounts of ingredients so the chilli sauce and the ginger sauce wasn't quite as good as we wanted. I will probably stick with buying the Asian Home Gourmet ginger sauce that I am obsessed with and have been buying for years. And you must have a chilli and a ginger sauce, it's all in the sauce!

The rice was made in a rice cooker and was perfect and if I am to be immodest, even better than some restaurant chicken rices I've tried. If you have a rice cooker or access to one, cook it in one as I've never quite managed to achieve the same texture by boiling rice in a pot on the stove. The chicken, and it was a large free range bird of about 1.7 kilos and the rice was enough to feed the four of us and then still have lots of leftovers so this is best saved for a group of hungry people - with orange auras or not! ;)

So tell me Dear Reader, what dish have you always wanted to make for years? 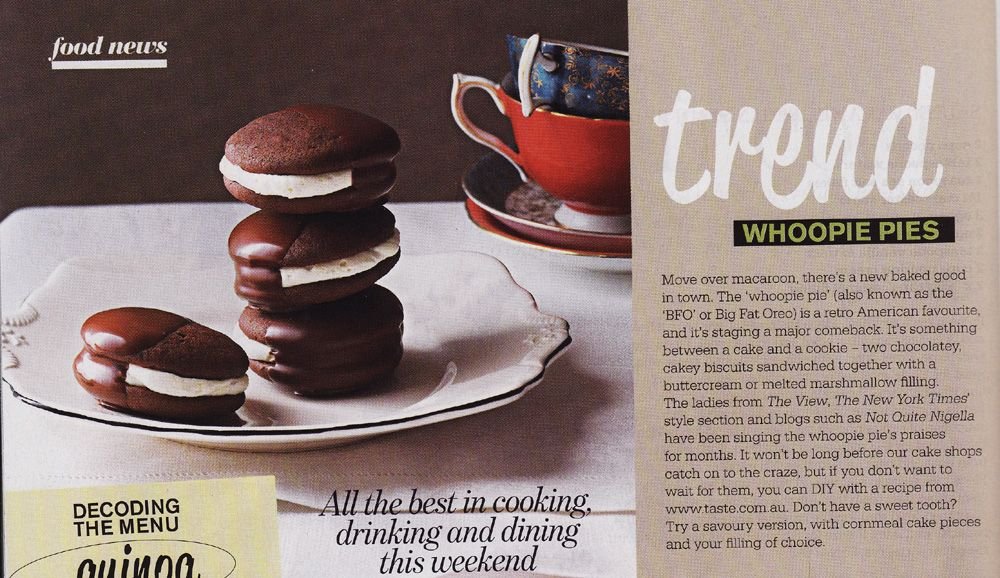 And I was delighted to hear about my little mention in the Sunday Magazine this past weekend for the Whoopie Pies that I made! Click to enlarge :) 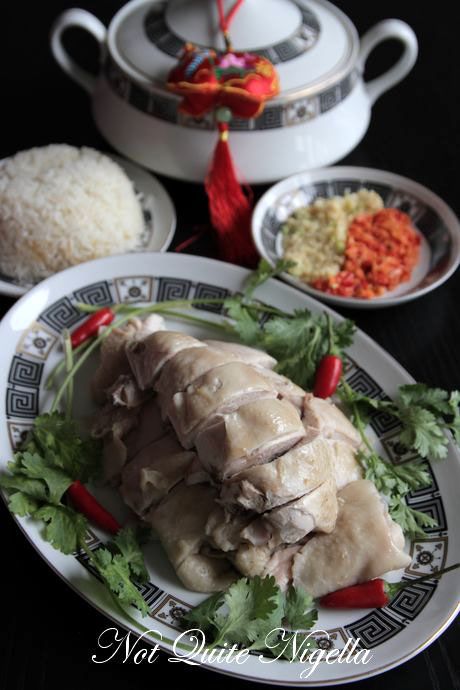 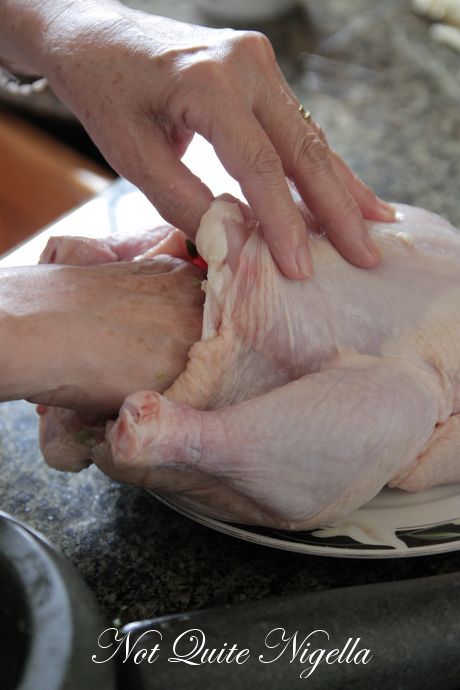 This always feels a bit obscene...

Step 1 - Bring a pot of water to the boil, the pot being large enough to fit the whole chicken. While the water is heating, remove the white fat from inside the chicken and set aside to use later. Rub chicken inside with rice wine and soy sauce. Roughly chop three pieces of ginger, garlic and one shallot and then blend in a food processor. Place mixture inside chicken. 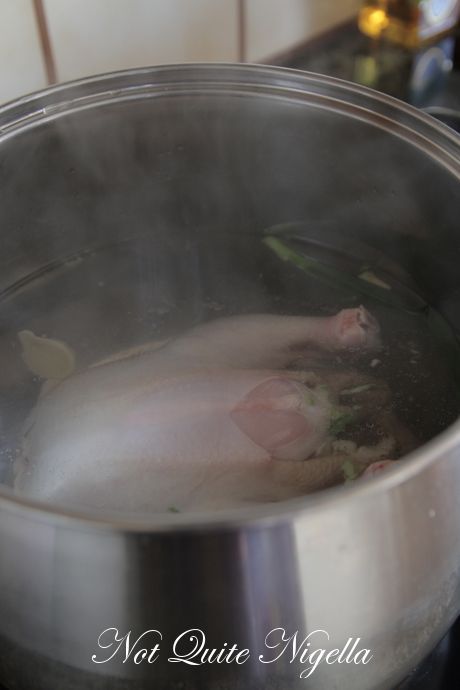 The chicken newly immersed in the just boiled water 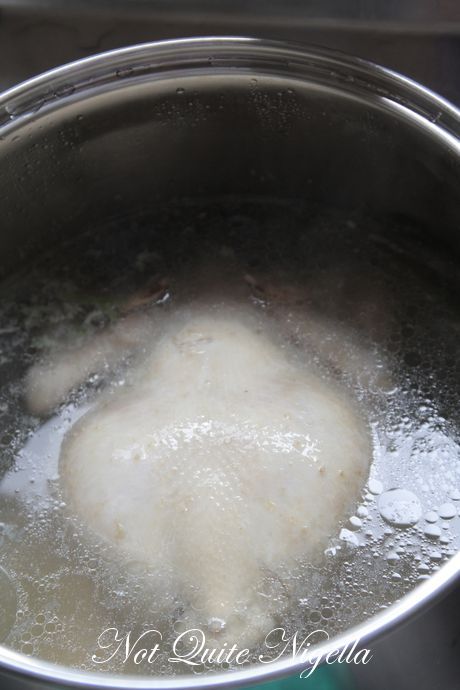 Step 2 - When the water boils, turn heat off and place the chicken, remaining three pieces of ginger and shallot in the water. Leave the chicken to stand in the water for one hour. After the first five minutes of standing, lift up the chicken, drain the water from the stomach cavity and put chicken back in the pot (I admit I only did this once as I forgot about it and it turned out fine). Repeat this process two or three times during the cooking period to make sure the chicken cooks inside as well as outside. 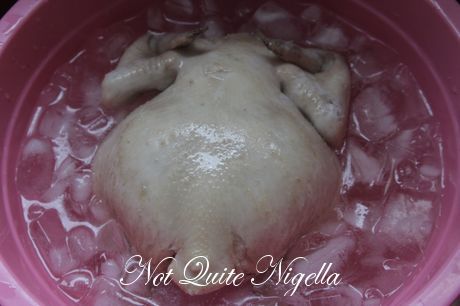 Plunging the chicken into a bowl of ice water 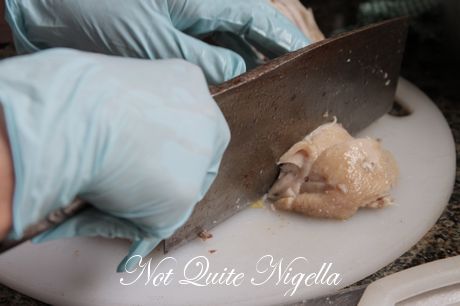 Chopping up with a cleaver 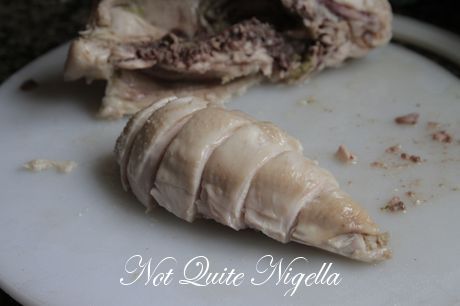 Step 3 - After 30 minutes, turn on the heat to bring the water back to almost boiling point, then turn heat off. The chicken, never being allowed to boil, will be very tender and juicy. At the end of the hour, remove chicken and plunge into a bowlful of ice water. Rub with remaining soy sauce combined with sesame oil and salt, and then cut into bite-sized pieces. 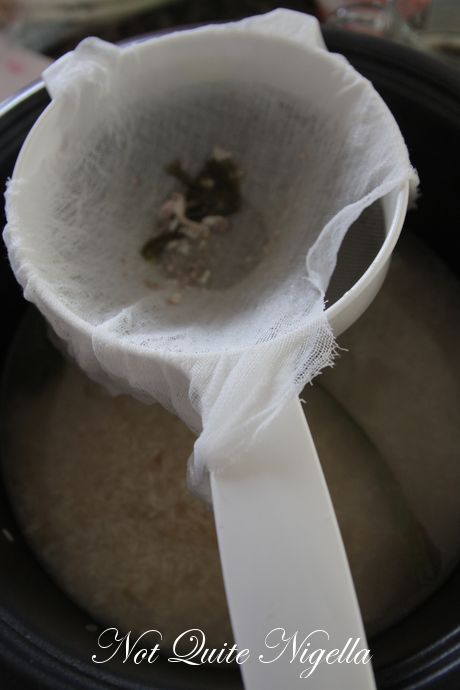 Straining the stock through muslin

Step 4 - For chicken stock, add extra chicken bones or pieces, three slices of ginger and two shallots to the water in which the chicken was cooked. Boil for one to two hours until stock has a strong chicken flavour. Discard chicken bones/pieces and strain the stock through a muslin cloth. 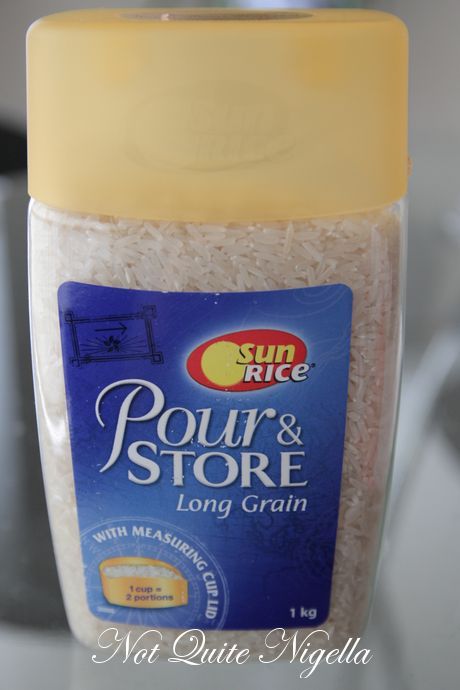 Step 5 - For chicken rice, wash the rice and drain well (the more water in the rice, the less chicken flavour! Some recommend drying the rice in a tea towel). In a wok, fry chicken fat until oil is released and then add the ginger and garlic and fry well. 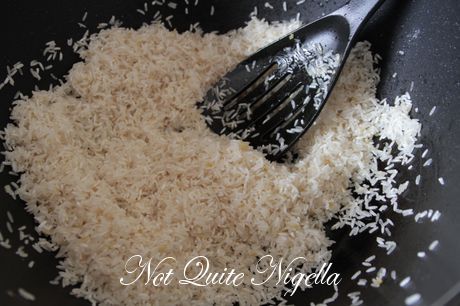 Frying the rice with the ginger, garlic and chicken fat

Step 6 - Remove from heat and discard the chicken fat and skin. Add the rice and salt and stir fry briskly for about 1-2 minutes. Transfer rice into an electric rice cooker or pot. Add in chicken stock and pandan leaves. Follow normal instructions for cooking rice.

Step 7 - For chilli sauce, roughly chop chillies, garlic and ginger and then blend in a food processor. Add chicken stock, lime juice and salt to taste. Will keep in covered container in the refrigerator for a few days, but is best served fresh. 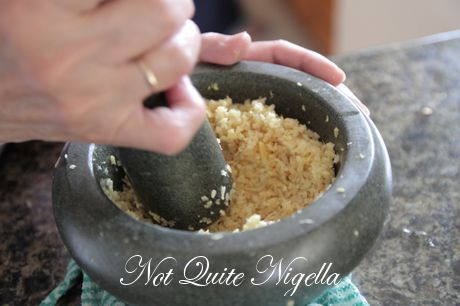 Pounding the ginger and garlic

Step 8 - For ginger sauce, roughly chop ginger and garlic and then blend in a food processor (we used a mortar and pestle as my mother's food processor isn't very good with small amounts of food). Add chicken stock, oil, lime juice and salt to taste. 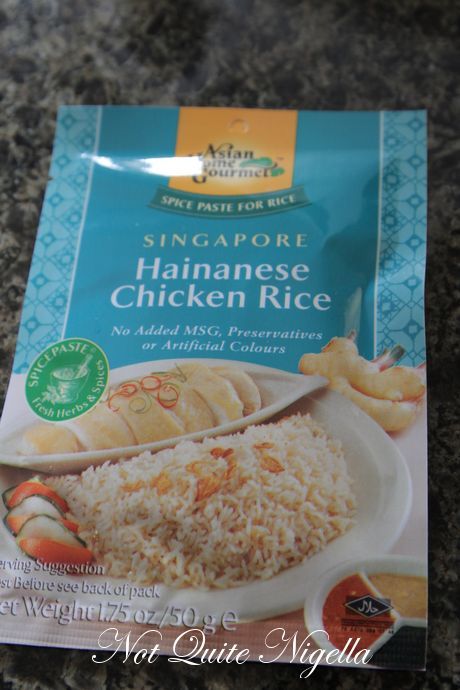 Step 9 - For chicken soup, ladle a small amount of hot strained stock into serving bowls. Add finely chopped shallot. If serving with cabbage, you will need to cook the cabbage in the stock for a short while before serving. 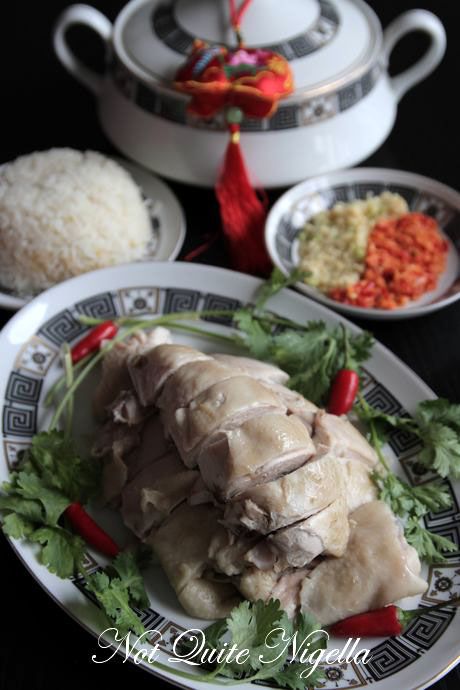