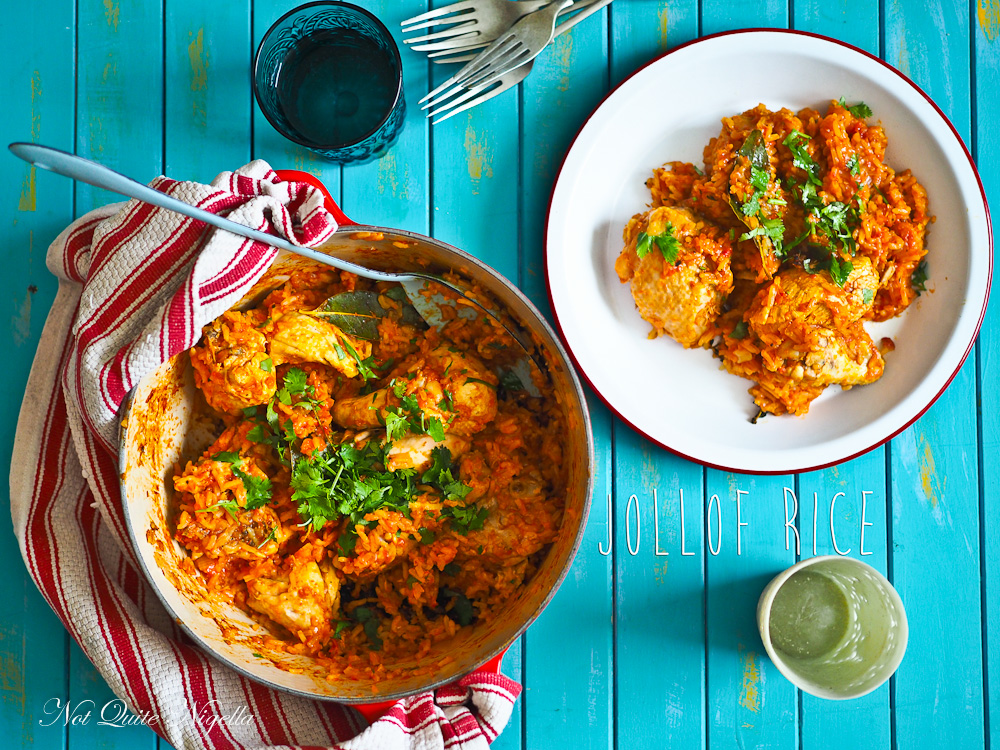 Ever tried a wonderful West African dish called Jollof rice? It's made up of rice cooked in a delicious spicy "tomato stew". The stew is made with tomatoes, tomato paste and spices and the key ingredient on this tomato stew is Scotch bonnet peppers which impart a sweet and spicy flavour to the stew. Here it is served with soft bone-in chicken pieces to accompany the smoky rice.

Although it is a popular recipe across West Africa nowhere more is it hotly contested that between Nigeria and Ghania. Words are exchanged over whose Jollof rice is better. If you google "Nigerian vs Ghanaian Jollof" there are thousands of pitches either way. I love how passionate each side is about defending their Jollof rice. Each country cooks the rice slightly differently. In Nigeria they use long grain rice while in Ghana they use Thai jasmine or basmati rice. In Ghana they serve it with a spicy condiment called shito.

Sometimes they parboil the rice although this is something people are opinionated about. I have to admit that I preferred it without parboiling the rice as it wasn't as soft. Some call that "baby rice". What you are aiming for is "party rice" with all the extras because it can be as simple as the home version of tomato and rice or it can have other things added to it. Jollof Rice is a rice often served at times of celebration. Party rice is always cooked in a cast iron pot ideally over firewood to get the requisite smokiness and the bottom layer of crispy rice is prized.

The name is said to come from the Wolof people of Senegal, Gambia and Mauritania who are said to have invented it. And it's a dish that is so passionately defended that Jamie Oliver was crucified on social media for culturally appropriating the dish and making his version. It was dubbed #jollofgate. I don't make claims of authenticity here, I did add coriander on top of mine whereas it's not a common ingredient but I did try to respect jollof rice and maintain the West African ingredients as much as possible and do the right thing. I hope I don't get embroiled in any Jollofgate scandals although I don't enjoy anywhere near Jamie Oliver's profile! 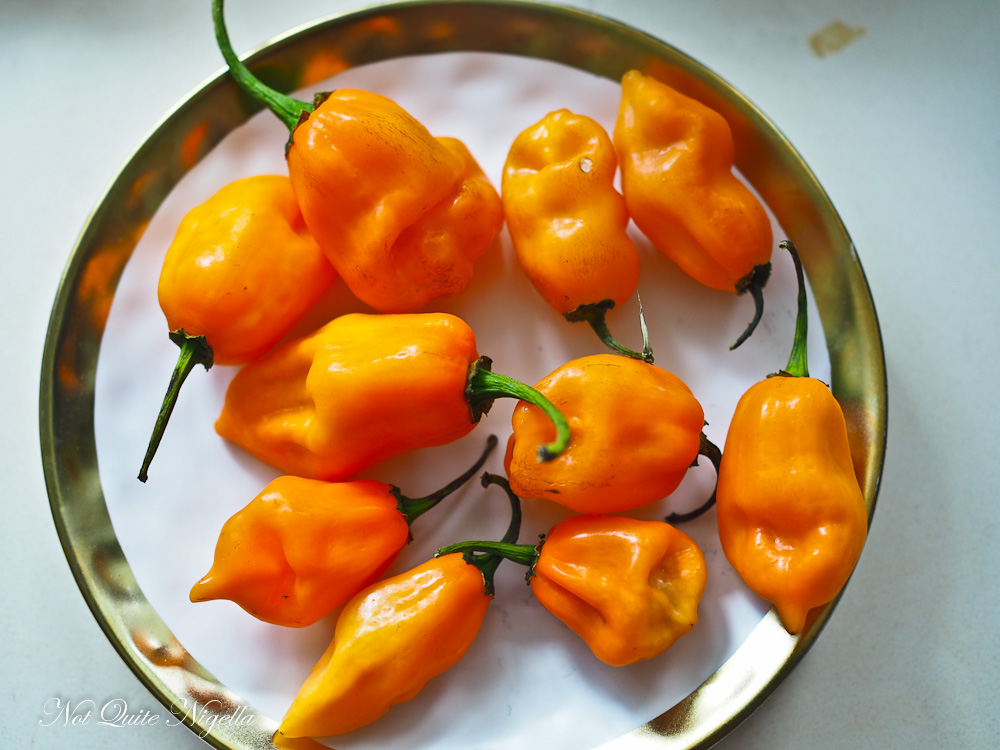 Scotch Bonnet chillies can be hard to find. These are habeneros which are similar but less sweet.

There was another time recently when I tried to do the right thing. I was taking Mochi on long drive to our weekend accommodation in the Blue Mountains. I drove up around 1:30pm so that I could get some nice photographs of the property while Nina was picking up Mr NQN and Garth at 4pm. Mochi has her own car seat that is usually in the back seat but I thought that I might put her in the front passenger seat this time just in case.

That ended up being a terrible mistake. She refused to settle down and while she is in the back seat she looks up occasionally but mostly sleeps she wouldn't stop fidgeting in the front seat. I have mentioned before how much I dislike highway driving. Well I'm also not very experienced in it and being by myself was quite stressful especially as she was fidgeting right next to me and turning herself around and around. During the drive I'd occasionally feel a little paw tap me on my arm but I was too busy trying to negotiate highway driving to respond to her.

Then she started panting although I had the air conditioning vents right on her. I had to pull over at an emergency stopping area and I took out her little water bowl and gave her some. She didn't want a drop! I had to laugh. I then realised all she wanted was some attention and she was wondering why I refused to look at her for an hour staring straight ahead. It's not easy to explain the concept of cars and travel to a dog I guess.

So tell me Dear Reader, have you ever tried Jollof rice? Did you hear about #jollofgate?

Step 1 - First make the tomato stew. Fry the first lot of onions and garlic in a large pot in 2 tablespoons of oil. Then add the tomatoes, tomato paste, scotch bonnet peppers and capsicums and bring to a boil. Simmer until all the water has disappeared-around 20-30 minutes. You can make this a few days ahead and store it in the fridge. 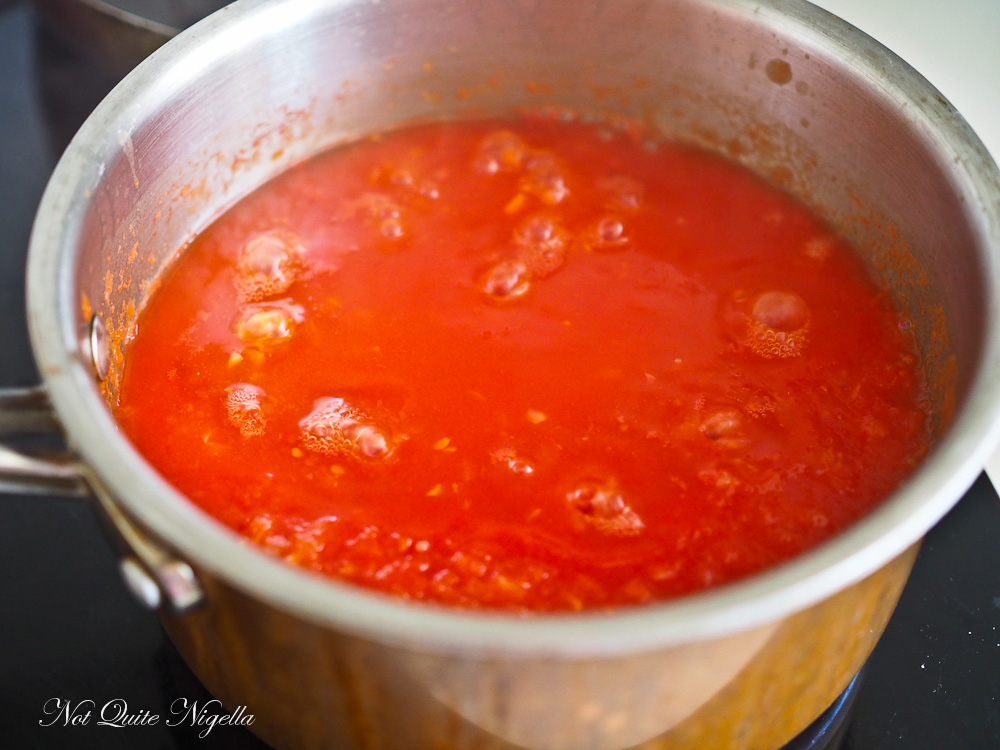 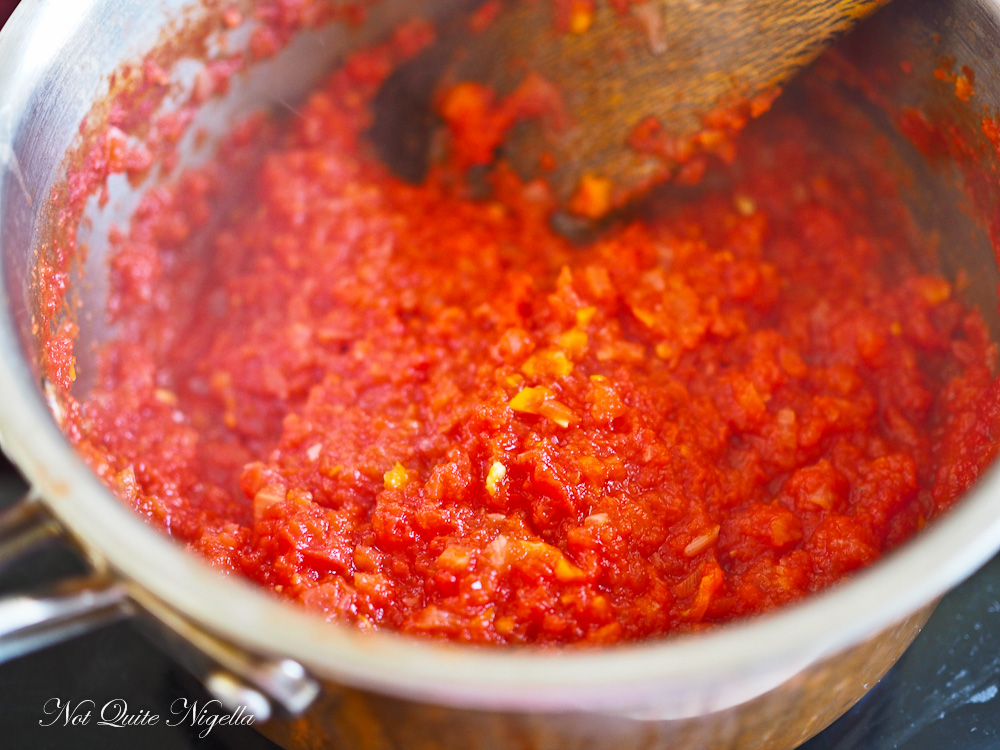 Step 2 - Heat a bit more oil in the pan and brown the chicken. Add the second lot of onions, garlic, ginger, curry powder, chicken stock, bay leaves and tomato stew. Add the rice and stir to coat the grains and then top with the chicken pieces. Place the lid on snugly and allow to cook on low to medium heat for 20 minutes. Check after 10 minutes to see if the mix needs more water and add a little if needed. Then turn the rice and chicken to ensure that it all cooked and keep cooking for another 10 minutes until the chicken becomes soft. The prize is the caramelised bits of rice stuck to the bottom of the pan.