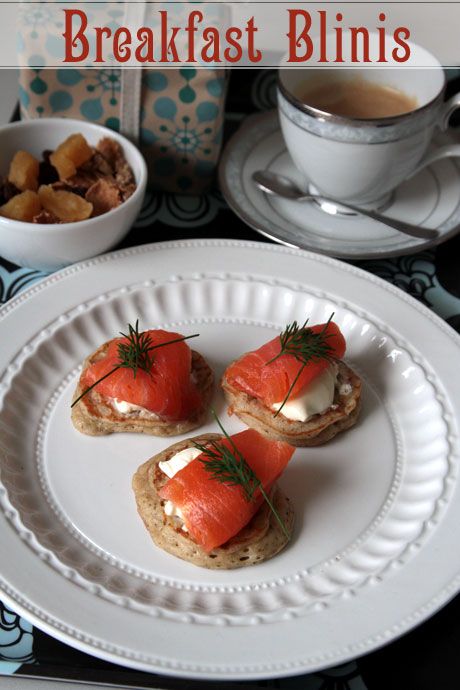 I previously told you about my email fumble with my partition mate way back when I was working at an ad agency. Well all sorts of funny things can happen or be heard over a partition at work. At another agency I had a buyer that worked for me. He was alright, he didn't particularly excel but he didn't get involved in office politics (a plus for me as I had the boss from hell). He was a blokey sort of bloke who loved soccer and used to have half naked girls on his computer screen all the time (a sexual harassment suit waiting to happen really). His negotiation tactic as a buyer was to use the good old "mate" or "guv" strategy when negotiating buys (guv being that he was English). I heard him speaking to a sales rep one afternoon. They were discussing the terms of an agreement and he was saying goodbye on the phone.

"OK I love you" he said to her and put down the phone.

The hairs on the back of my neck raised up. I knew who he was talking to and I was shocked to hear it. But not as shocked as he was. 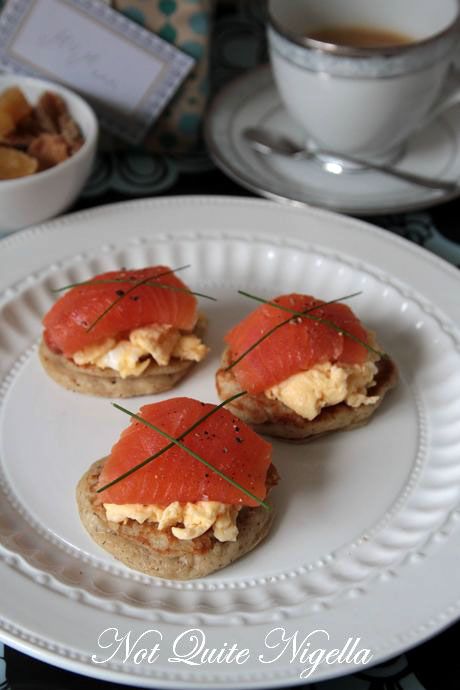 "Ohhhh myyyy godddd" I heard him moan. I meerkatted at the top of the partition and looked down at him. His head was in his hands and he was rocking back and forth on his swivel chair.

"Noooo. Definitely not! She sounded like my mum and...."

"Ok now that sounds creepy." I said and burrowed straight into my seat again telling him "I hope you got us some good rates after that!"

Well it turns out his little inadvertent slip of the tongue got him some _really _good rates which came through shortly later. It also got him an invitation as her plus one to a few events including a rather special Sydney Olympics one that I should have been invited to. And I think he was reluctant to say as she was older than him but it may have been a cougar cub romance! 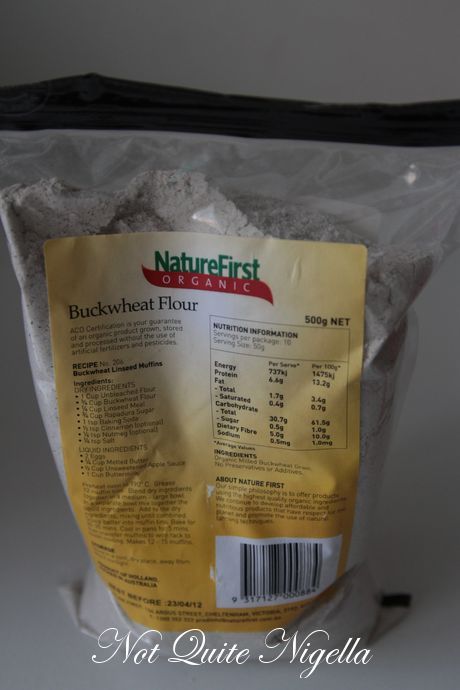 These blinis are in place of saying I Love You. Should you want to curry favour with your father or partner this weekend serving a breakfast like this can't help but make the day start wonderfully. Blinis are different creatures to pikelets or pancakes. They are made using a small amount of buckwheat flour which is a fine, gluten free flour that has an earthy almost mushroomy aroma to it. There is also yeast and sour cream added to blinis which gives these a nice light texture and an distinct taste. 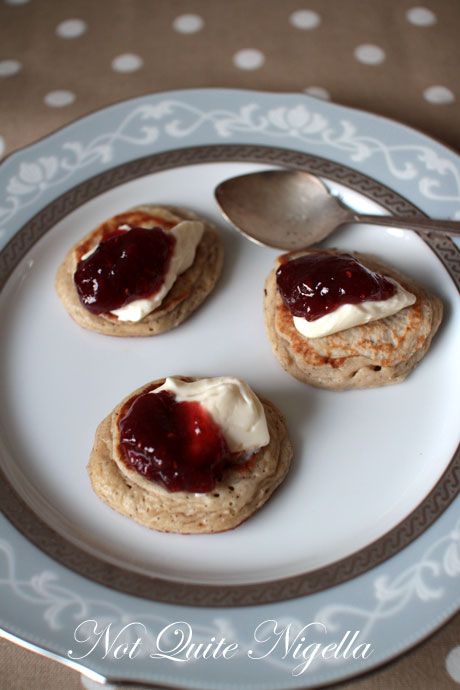 Sweet blinis with jam and cream

They're small and great cocktail party food and a variation of these was topping them with scrambled eggs and smoked salmon for a breakfast blini. Like pancake mixes, these are best when left to stand for 30 minutes or so making the batter a day ahead or the night before is no problem. They can also be served with sour cream and jam for a sweet topping.

So tell me Dear Reader, do you find it hard to say I Love You to people? And how do you show people that you care about them? I cook for them! ;) 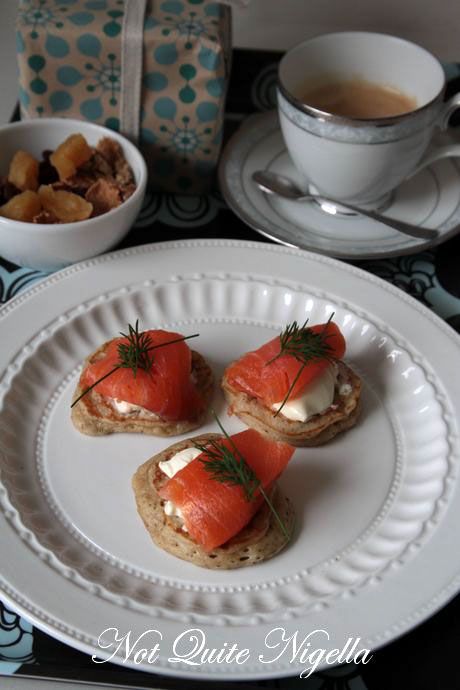 Makes approximately 20-25 blinis depending on size

For scrambled egg and smoked salmon or ham version:

Buyer's tip: You can find buckwheat flour in the health food section of most supermarkets or in health food stores 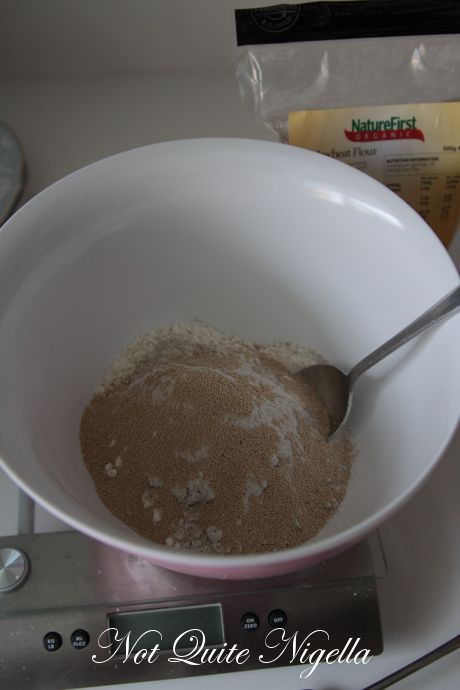 Step 1 - Place the milk and sour cream in a small saucepan over low heat cook, stirring with a whisk until lukewarm and the mixture is smooth. Add the egg yolk and whisk to combine. Meanwhile place the flours and yeast in a bowl and stir to combine.  Gradually add the milk mixture to the flour mixture whisking until smooth. 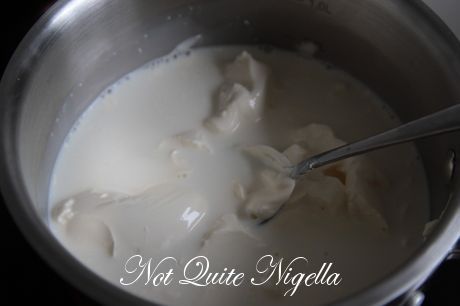 Step 2 - Cover with a clean, damp cloth and set aside in a warm place for 30 minutes or until bubbles appear on the surface and the mixture is foamy and thick. 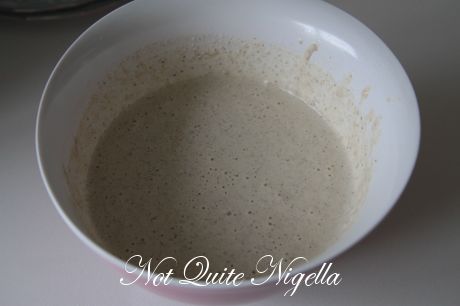 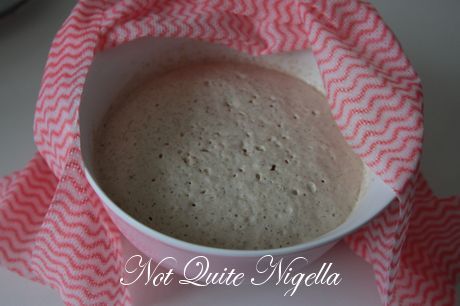 Step 3 - Whisk the egg white until soft peaks form and add this to the mixture and stir well to combine. 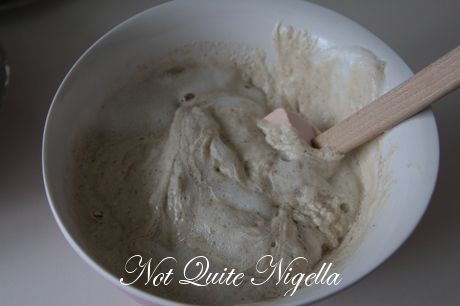 Step 4 - Heat a medium or large saucepan on medium heat and add some oil. Using a teaspoon drop a heaped teaspoonful of mixture onto the pan-it is thicker than a pancake mixture so it can be dolloped. Cook for 1-2 minutes until bubbles appear on the surface and then gently turn over and cook until golden. 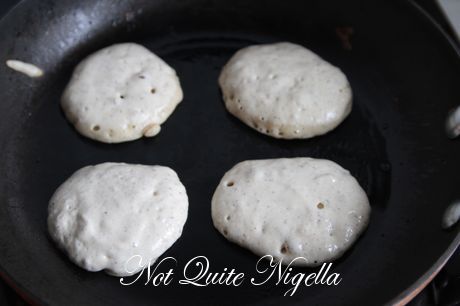 Step 5 - To serve with scrambled eggs, heat butter in a saucepan (I used the same saucepan that I cooked the blinis in). Whisk eggs, milk and salt together until beaten. Cook eggs slowly, moving them around gently and as little as possible. Break up the egg so that it can sit on top of a blini and top it with a triangle of smoked salmon and chives and a grind of black pepper.

Step 6 - To serve with sour cream and smoked salmon, spoon a little sour cream onto a blini and then top with a triangle of smoked salmon and a sprig or two of fresh dill. 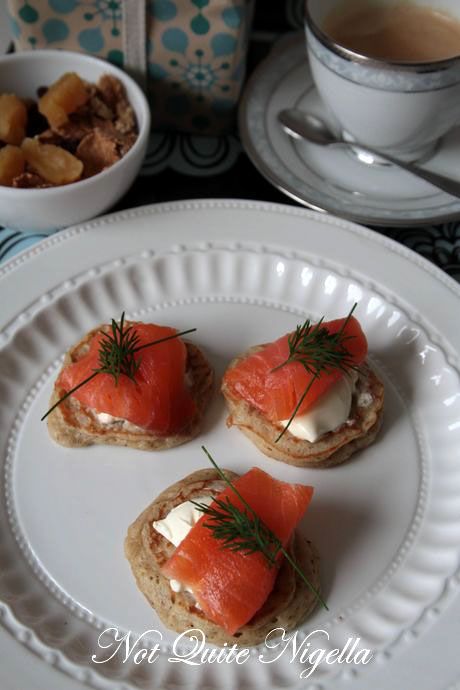