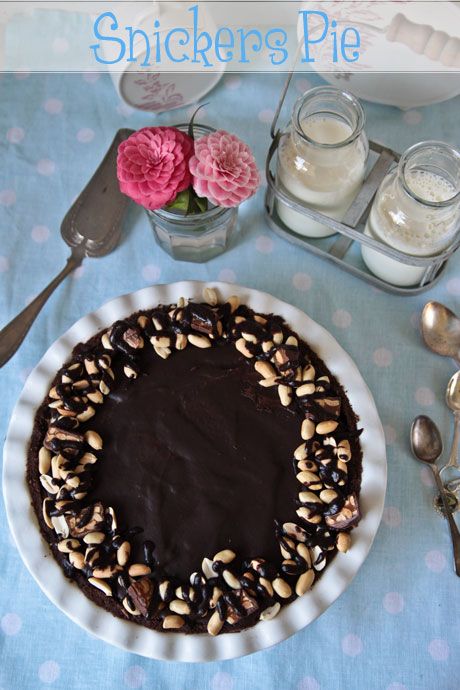 When we were little my parents rarely gave us dessert. Dessert was a piece of fruit or nothing and I recall keeping Christmas or birthday sweets for months afterwards hanging them up in a big up at the end of my bed and taking one piece out very occasionally and savouring its taste and feeling the sugar hit course through my body. When I would get a tiny bit of pocket money, even 10 cents I would go straight to the corner store and stand in front of the display chewing my lip and biting my thumbnail deep in thought as to how best spend my hard begged _ahem _I mean earned money. Red frogs were always a good choice but I also liked Redskins and Toffee Apple bars because they seemed to last forever. 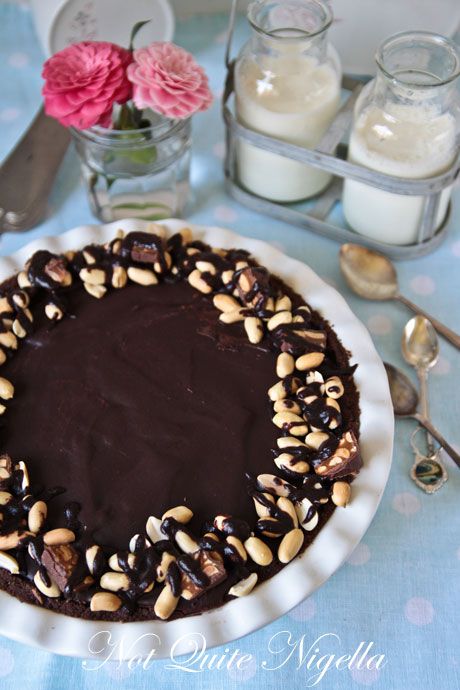 One day when my parents went to visit one of my mother's friends. I found most adults quite strange and creepy and they would always lean down and cluck "She's becoming a big girl isn't she! But so skinny!" and I would recoil and feel slightly nauseous at the thought. I didn't want to grow up and I certainly didn't want to be examined as if I were on a sample on a petri dish by my parent's friends. It felt icky and they always said it in a way that gave me the heebeejeebies as if it were planning to cook me and eat me. 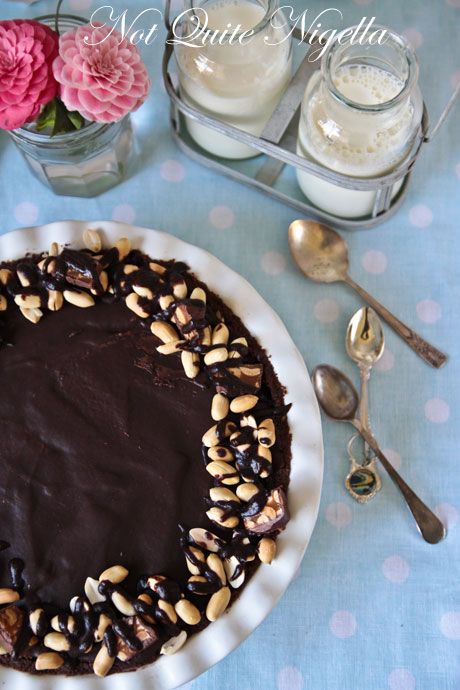 Anyway, one of my mother's friends was one of the adults that I liked. And do you know why? Well, she owned a corner store and one day my parents popped in to see her with my sister and I. This woman also refrained from commenting about how big I had grown (and therefore wasn't likely to eat me) plus she uttered the very best words my sister and I could have ever heard. "Help yourself to anything that you want girls" she said smiling. She must have seen us looking around her store wide eyed devouring the sweets and ice creams with our eyes and our glance settling on row after row of colourful packaging. She seemed to stock everything and the boxes of treats reached up to the ceiling to the heavens. 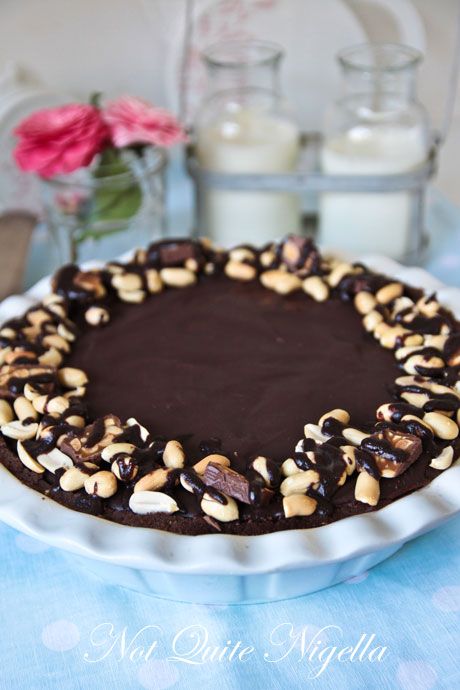 Now I don't know if you've ever seen those shows where people try and grab as much as you can and for a moment I think my head exploded from the sheer idea of a lolly and ice cream bonanza. But before I could move a firm hand touched my shoulder. It was my mother. "One item only" she said firmly but that didn't matter. I could choose _any _item I wanted and it could be over 2o cents! I chose an ice cream, I believe it was a Bubble O'Bill (my favourite as there was a bonus round of a bubble gum nose so there were two treats for the price of one) and she became one of my favourite "aunties" from that day on. 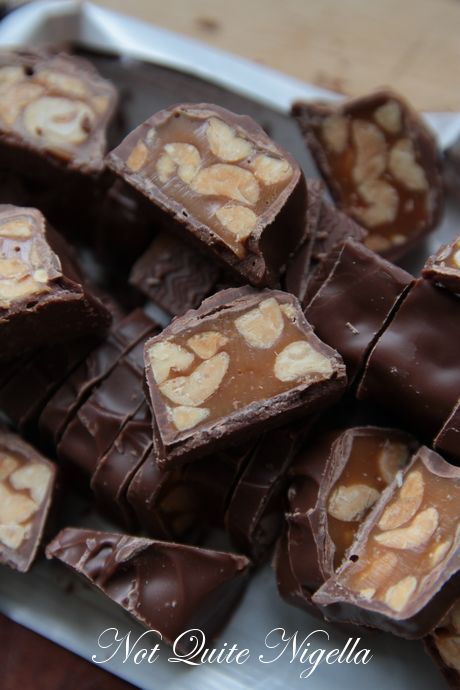 Now that I am fully grown up the treats that I crave aren't quite the same although there are some nostalgic favourites and I do love to make things inspired or using the childhood treats. The Snickers Pie was inspired by a Magnolia Bakery "Ice box Snickers pie". The Nibble had a variation of it that I adapted to suit the ingredients that we had here as well as adding another layer of the caramel to it and a ganache topping. 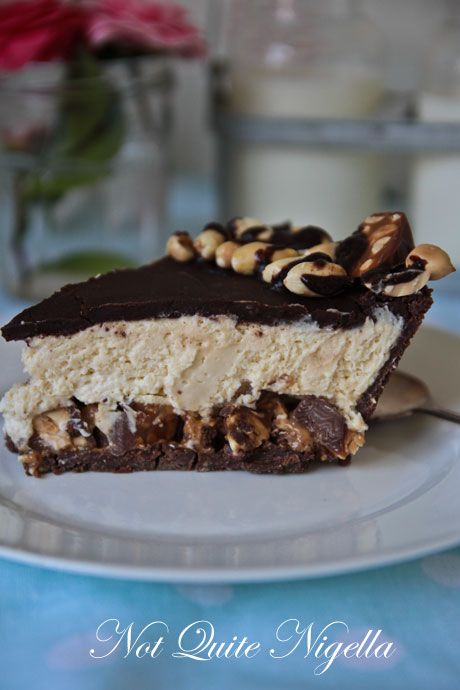 I have to admit that sometimes it takes two or three goes to get the right flavour balance to consider a recipe a homage to an existing product. However this pie was with the first go a winner. It has a thick layer of chocolate chip cookie crumbs, a layer of thick caramel, chopped up Snickers bars, a lovely whipped peanut butter, cream cheese centre and cream centre, a top layer of chocolate ganache, roasted peanuts and more chopped up Snickers bars. It is a Snickers but in a pie form. Even better it was actually simple to make and didn't require much time or skill in the kitchen and not a jot of baking. The thing that took the longest was actually getting the cookie crumbs in a nice even layer and the rest was a cinch-just let your mixer do all of the work and then your mouth do all the eating...

So tell me Dear Reader, what was your favourite childhood ice cream? And did you get dessert growing up and if so, which dessert did you have most often? 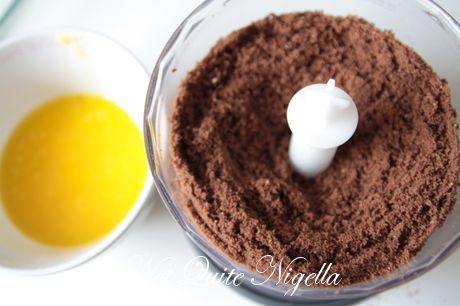 Step 1 - Grease your pie plate with some butter going all the way up the sides. In a food processor, finely process the cookie crumbs until very fine and then add melted butter. Press this mixture into the pie plate and up the sides. Use a glass to help press it and make it flat. Place in the fridge to harden. 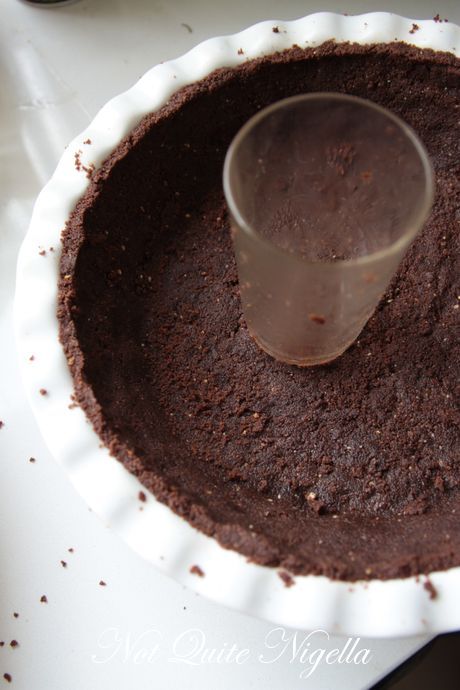 Step 2 - In the bowl of an electric mixer fitted with a whipping attachment, whip the cream until it becomes firm peaks. Set aside in a large bowl. Switch the head on the mixer to the beater head and then using the same mixer bowl beat the cream cheese, sugar and peanut butter until it becomes smooth and there are no lumps-this is easily done if the cream cheese is not straight from the fridge and has been softened on the benchtop for about an hour or two (depending on temperature). Fold the cream and the peanut butter and cream cheese mixture together gently making sure not to deflate the mix.

Step 3 - Remove the pie plate from the fridge and spread the cookie base with the dulce de leche. Place the Snickers pieces on top of the layer of dulce de leche and then top this with the whipped cream cheese and peanut butter filling. Place in the freezer. 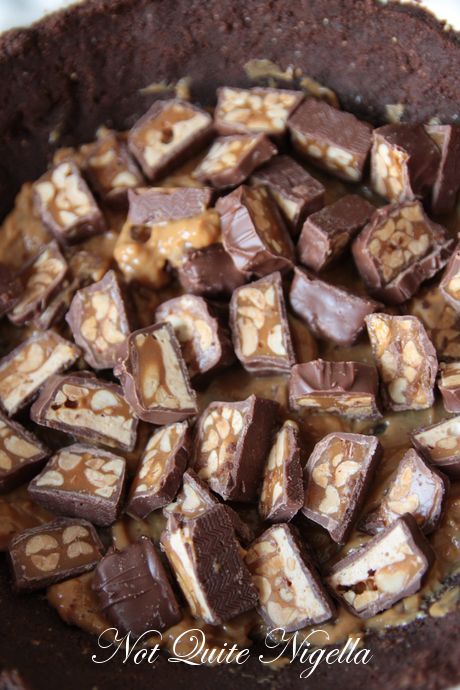 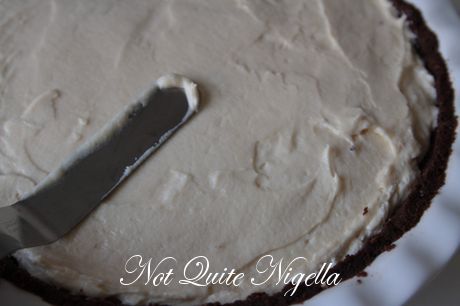 Step 4 - Make the ganache by breaking up the chocolate into pieces and melting it in the microwave on 50% power on 60 second burst stirring between bursts or over a double boiler (a heatproof bowl fitted over a pot of simmering water). Then warm the cream and stir into the melted chocolate mixture until completely smooth and thoroughly combined. It should still be very liquid. Reserve a small amount (1/3 cup) for drizzling over the pie at the end. Have an offset spatula ready and remove the pie from the freezer and working quickly pour and spread the liquid chocolate ganache over the top and tilt the pie tin to take the chocolate to the sides using the spatula to spread it right to the edge if you need it. 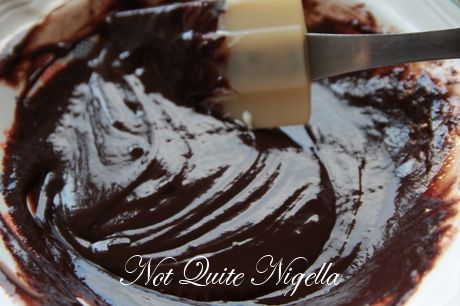 Step 5 - Sprinkle nuts and a few pieces of Snickers around the edges. With the reserved ganache (heat it gently again if it has become too firm) fill a small piping bag with a small hole or a zip lock bag and then snip a little hole in the corner of the ziplock bag or the piping bag and then drizzle the ganache over the nuts and Snickers on the edge cementing them in place. Chill for a few hours or place in the freezer for 30-60 minutes to firm up. Then keep refrigerated until ready to serve. 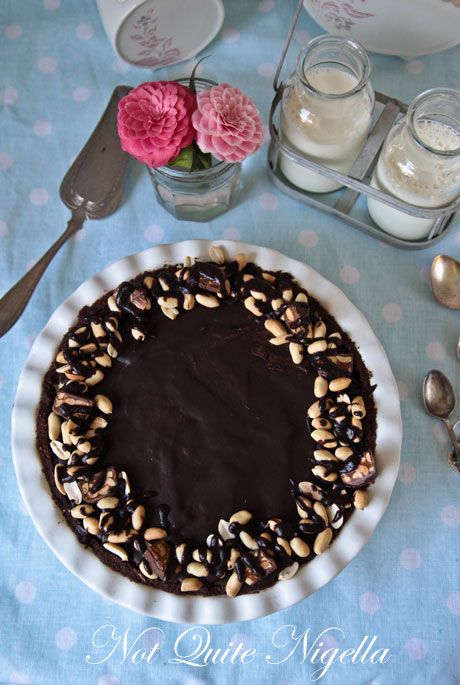