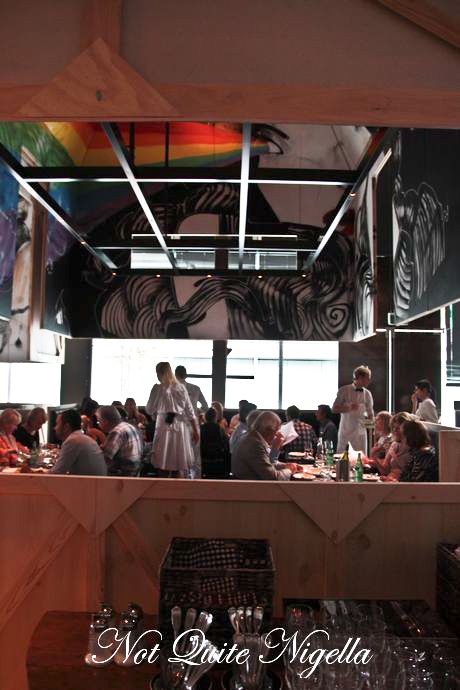 "So anyway, I was wearing what I call my adventure pants" my friend Ute leans over and tells me.

"They're cream linen pants. I don't really care what happens to them so they're my adventure pants. 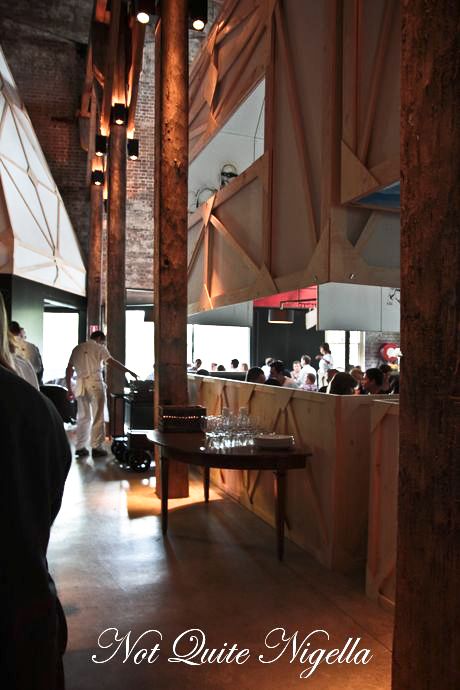 I'm sitting at the bar of Neild Avenue at 6:15pm one Friday night. I was running late trying to find a park that lasted for longer than two hours (no luck) and Ute had arrived at 6pm when Neild Avenue opens. It is the latest eatery from Icebergs and North Bondi Italian's Maurice Terzini and it is apparently the restaurant that everyone wants to be seen at. And from the long, tanned limbs and short dresses and long beach tousled hair, it looks like there are some lissome imports from Bondi here. Despite the fact that Ute was there at 6pm, that wasn't enough to secure a table (there are no bookings here) and when I got there, there was only room at the bar. On a wobbly bar stool (best not attempted in heels). 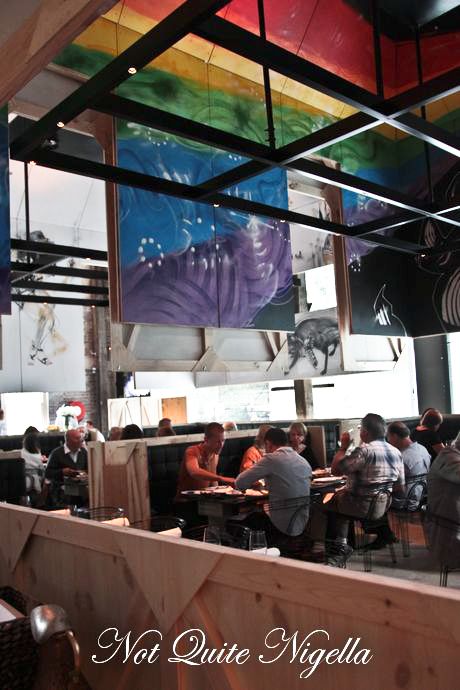 The menu is shown to us (a stapled sheaf of pages) and a lovely young waitress from New Zealand takes our order. We ask her for recommendations on what seems to be an extensive menu. Each page is marked with a "No alterations to the menu" and we note that there are some very reasonably priced wines by the glass. There are a range of Mediterranean cultures represented from Turkish, Lebanese, Italian and Greek with sections broken down into small starters; grains, pulses & vegetables; ancient soups; more substantial starters and then a range of items from the coal grill and spit. We dither over the menu but then Ute utters the words that remind me of why I love dining with her. "Let's order some things and I'm happy to start all over again if that isn't enough and order more". Music to my ears! 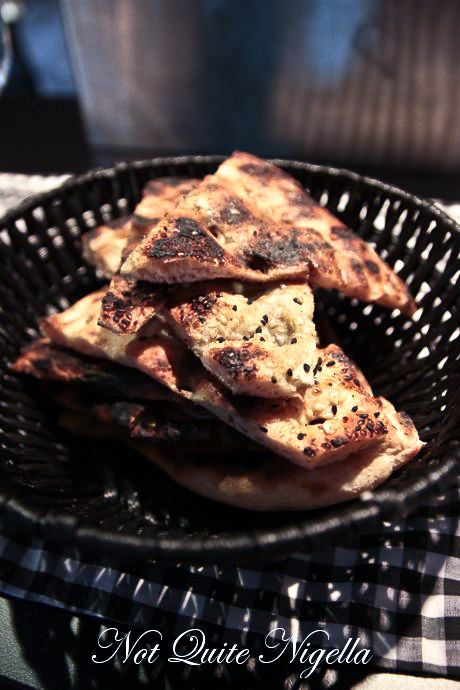 I look around. Open for just four weeks there seem to be people on every possible perching spot. I spot some television celebrities too. "It's all very New York" Ute says surveying the room and it has that warehousy sort of vibe to it. The main dining area has high partitions and at the back is the kitchen where there are displays of meats, pastries and salads as you would see in a regular Turkish restaurant. The bread is an Afghan bread (Mr NQN's favourite bread-he eats it by the yard) which is thin and slightly spongey. Here it is given the char treatment and served warm and smokey. 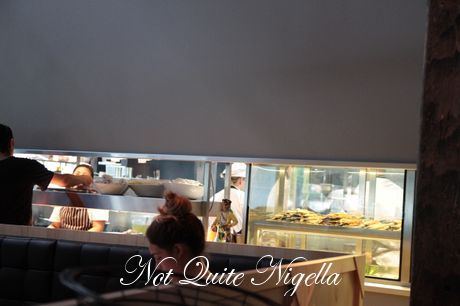 The kitchen with kebabs and breads in the window 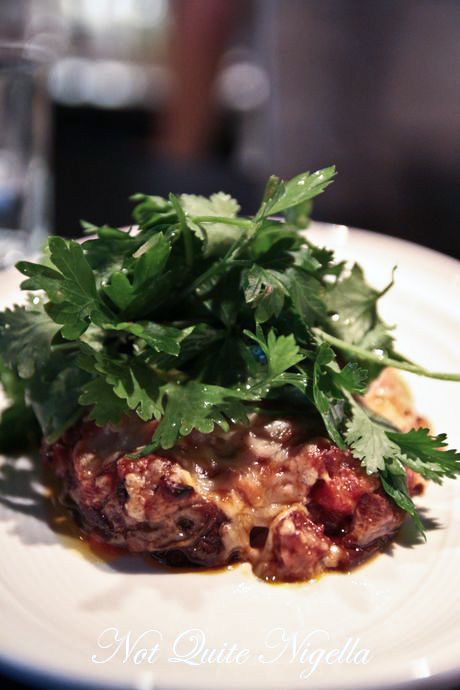 Our starter is the baked eggplant covered with 12 hour cooked pork mince ragu and then topped with a white sauce of kasseri (Greek cheese) and pecorino cheese. It's covered in a spray of parsley which helps give it freshness and the eggplant is soft and rich with the pork mince ragu and melted cheese topping although I don't know if you say that it is particularly revelatory and I was hoping for one of those fall apart meat ragus rather than a mince one. 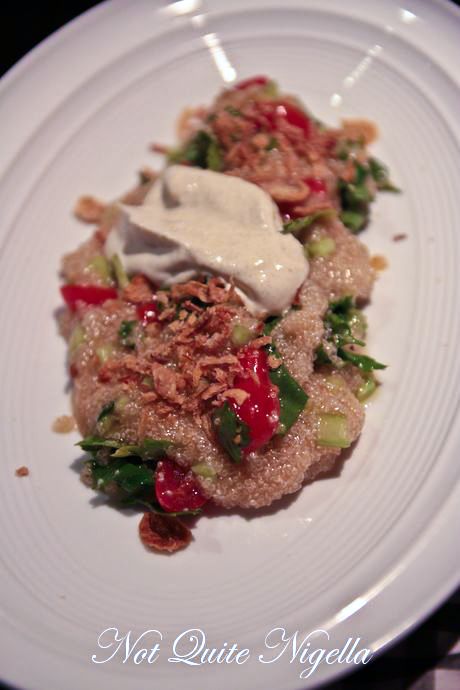 There's a large break between the eggplant and mains. One long enough where two people like us that can't stop chatting actually notice that we haven't had food for a while. The fake tabouli salad arrives and it is a moist salad made up of amaranth grain, tomato, cucumber flavoured with fresh coriander, parsley, lemon and a generous sprinkling of fried eschallots. On top of this is dolloped some hung yogurt which at first looks like hummus but has that unmistakeable yogurt tang. It's wonderfully fresh and if this is what fake tabouli is, then I'm happy to have the fake. 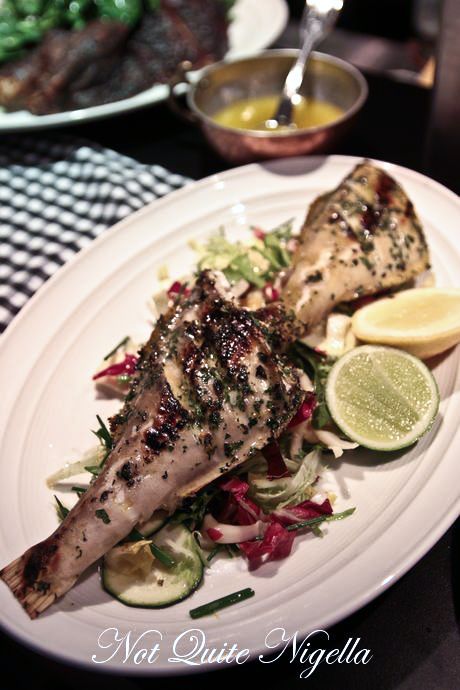 We were choosing between the calamari, leather jacket or john dory and although I always love john dory we went with the waitress's recommendation of leather jackets. These are slashed and filled with "Chermoula" roasted coriander seeds, parsley, coriander, lime and lemon and went beautifully with the fake tabouli salad. The two fish, a very decent serve were served on the bone with their heads removed and were succulent and fresh with an appealing char taste to them. The kitchen uses Turkish and Greek style custom coal grills and spits for their low burning point and maximum colour and flavour and it is also said to be a healthier way to eat and remove unnecessary fat. Well if you're into that sort of thing... ;) 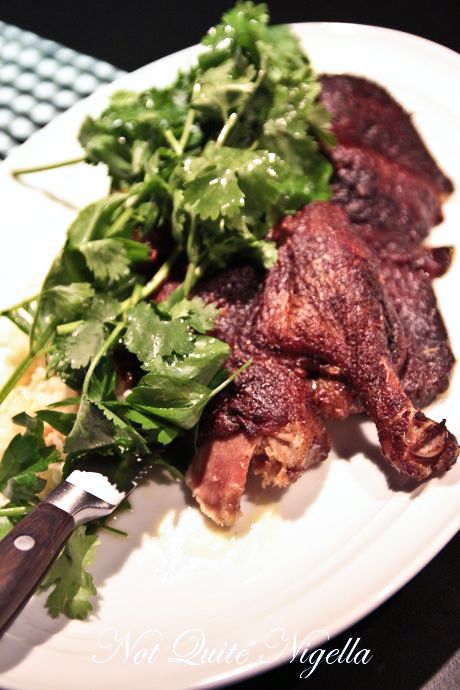 Our meat option was another recommendation by the waitress and came with a sharp knife. This was one of those dishes that I found impossible to stop eating. The roasted duck, a lovely Aylesbury cross Pekin number from Dutton Park in Young, NSW, is flavoured with all spice, cinnamon and star anise, the skin served soft and slightly crispy and the meat wonderfully tender. It's also a meaty duck so that you don't feel like you are picking through bone as can sometimes happen when you get whole duck. It sat on a bed of flavoured rice and chickpeas which went perfectly with it and was a generous size that I could even take Mr NQN here and he would be happy.

"How about we get the Sweet pie?" I ask Ute.

"What? We're not just getting just one dessert are we?" she says eyes wide with alarm and I note she was still nibbling on a piece of duck. Yes I had skipped ahead to look at the dessert menu because I had a two hour park and there was no way I was going to miss dessert! 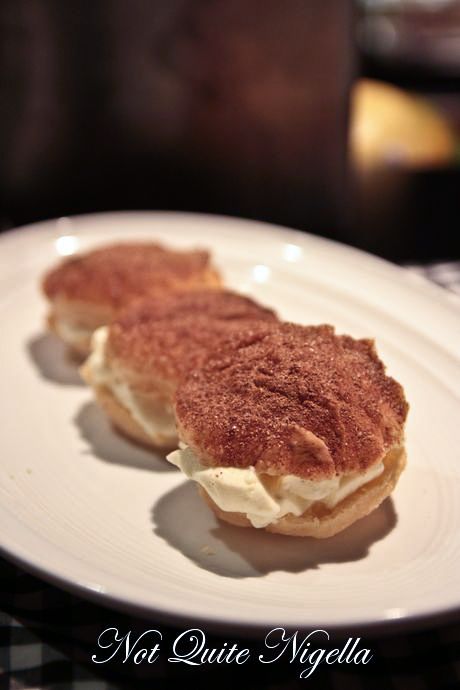 With the prompting of our waitress we choose the Bomboloni and I was trepidatious at first. Mainly because I've had bomboloni and they haven't wowed me. But these three crispy little beauties are about to change my mind. They're crispier and smaller than the bomboloni that I've had (in fact the inside of them looks like a deep fried choux pastry) and they're also split in two and filled with a rich vanilla cream and then dusted on top with cinnamon sugar. If there was a time for swearing or riots it would be over these. 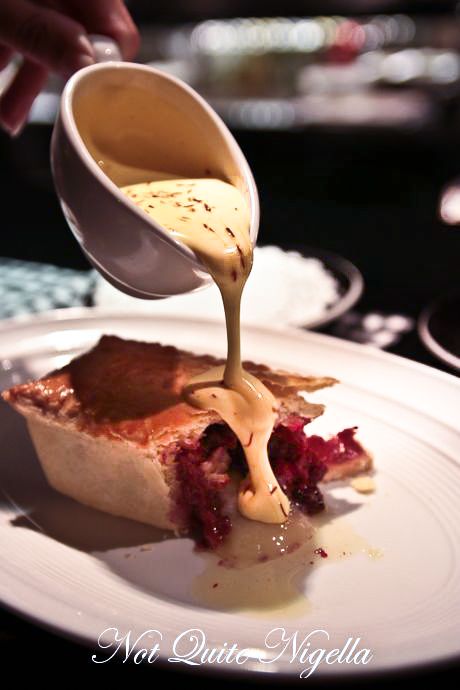 The sweet pie is actually a rectangular individual pie filled with blackberries, blueberries, strawberries, raspberries and a centre of liquid white chocolate. The filling is sweet, almost reaching a jam-like sweetness especially with the white chocolate ooze and the pastry is nice and thin. It is served with a very saffrony custard that only adds to the lusciousness although if there were a fire, Ute and I agreed that we would save the bomboloni first. 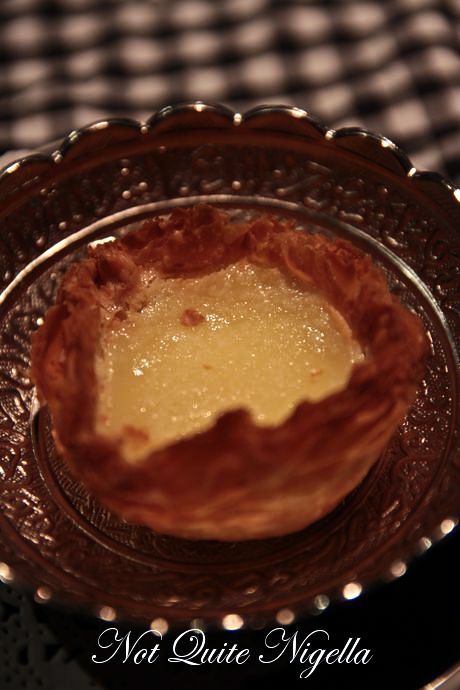 One to share, well it's barely a mouthful and really barely counts as a third dessert, the mini duck egg custard tart is sweet and thick and ever so slightly burnished at the top. The filo pastry is thin and multi layered and a thousand tiny fragments shatter and fall onto both of our laps.

"I think we need your adventure pants" I say to Ute. 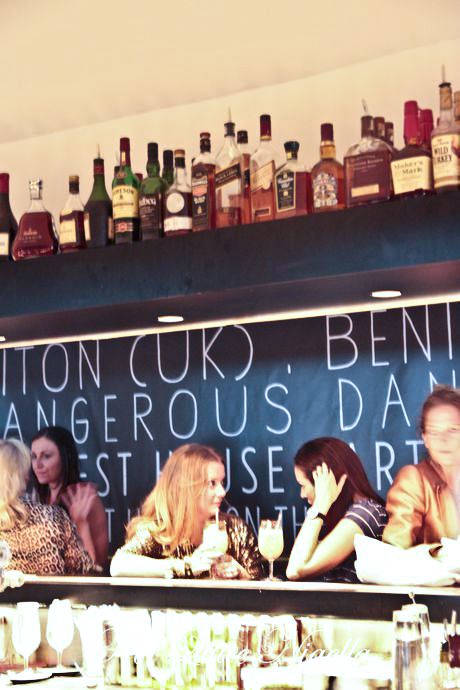 This restaurant has now closed
Open for dinner 7 days from 6pm, Friday lunch. 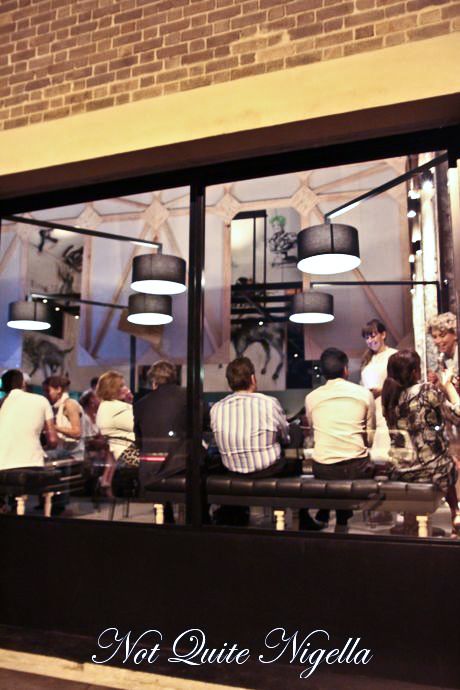