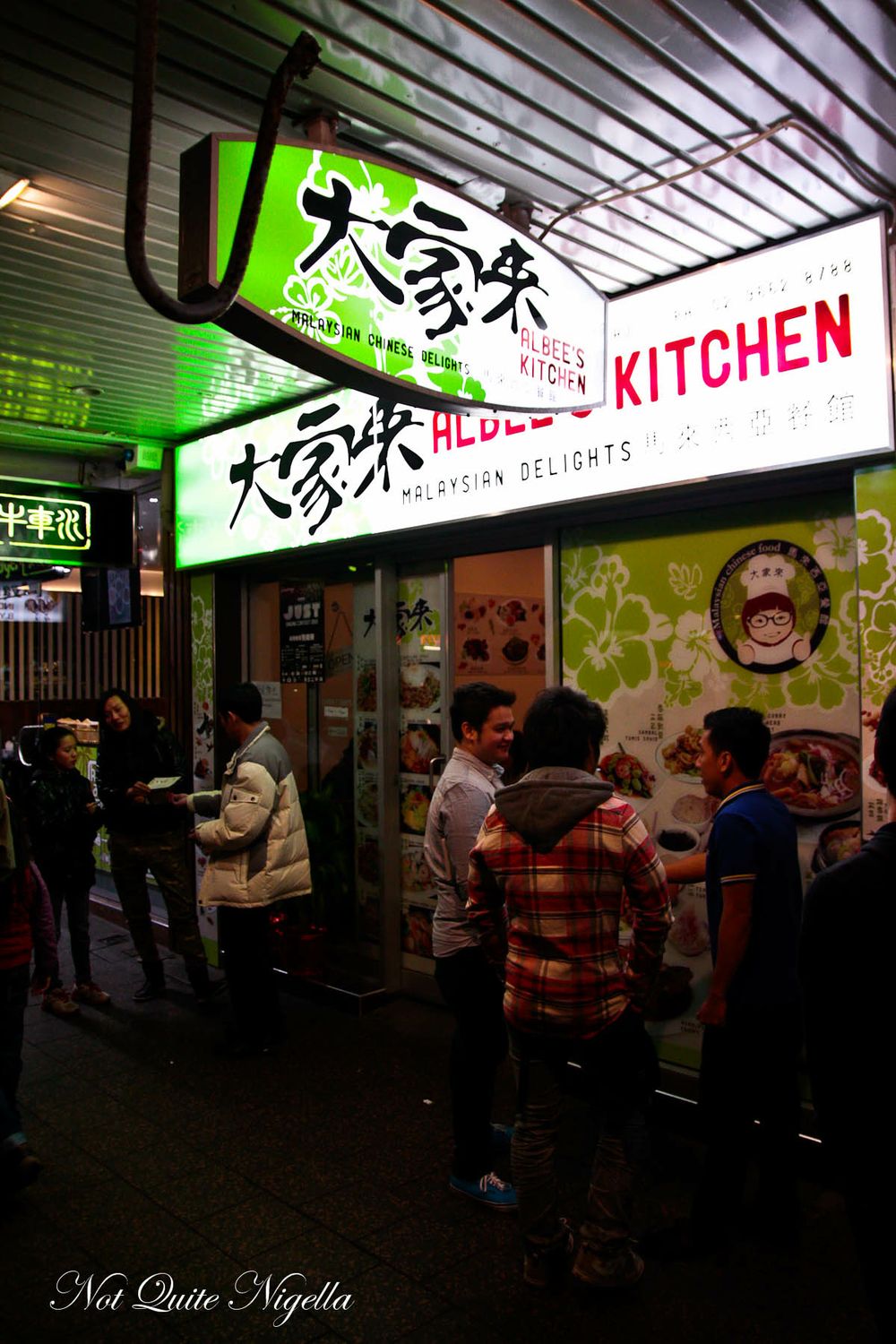 When we were growing up, our home phone number was one digit away from that of the Pavlova Pantry. About once a week someone would call us and try to order a pavlova and we would get the urge to buy a pavlova as a result and it always put that business foremost in our minds. A friend recently mentioned the same happening to her for Albee's Kitchen's two month old Kingsford branch - indeed her phone number is one digit away and as a result she often gets a hankering for Malaysian food. 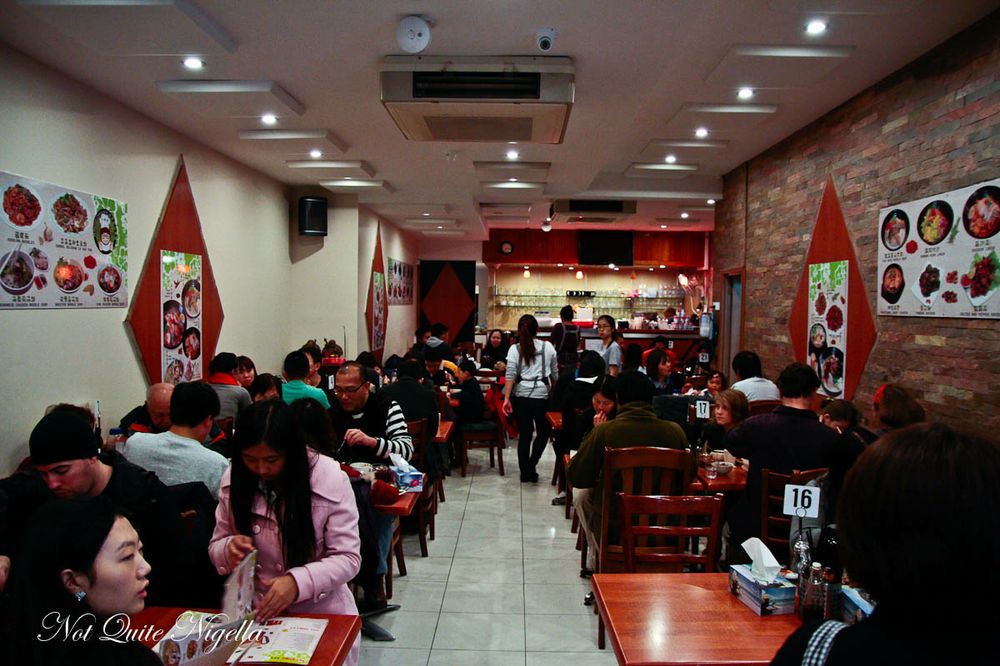 Albee's Kitchen is located just near the corner of Anzac Parade and Meeks Street in Kingsford, which seems to have taken up status as one of Sydney's busiest eat streets lately with crowds flocking to the busy street with student friendly prices and a seemingly unending amount of choice of the mostly Asian variety. There's a queue outside Albee's which seems par for the course. In fact when we walk in we seem to be at the tail end of a huge stream of people. Somehow, everyone gets seated although we are sharing a table with another couple. The menu is already worn from constant flicking. I see a few things that I want but the woman behind the counter where we happen to be sitting right up against is helpful and offers her suggestions. When I ask about one dish she wrinkles her nose and then recommends a couple of dishes and before we know it, the first of them is hitting our table. 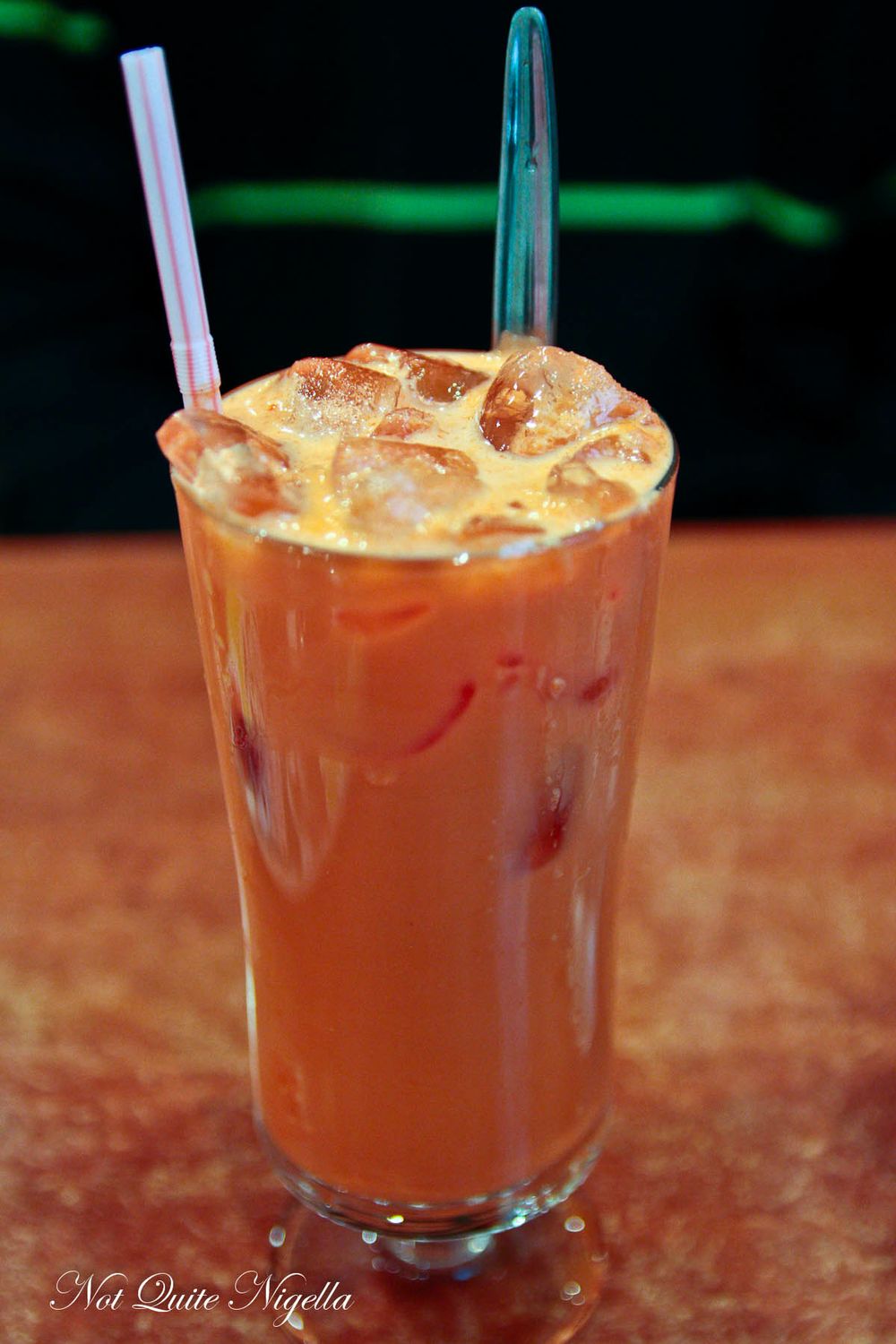 Drinks can be ordered without ice for $1 extra and I think next time I'll do that because I really enjoy the extra sweetness and creaminess from the carrot juice and milk (I know, it's a slightly perplexing combo but it works) but once it starts to get watered down, it's not quite as good although we'd imagine ice is welcome during summer. 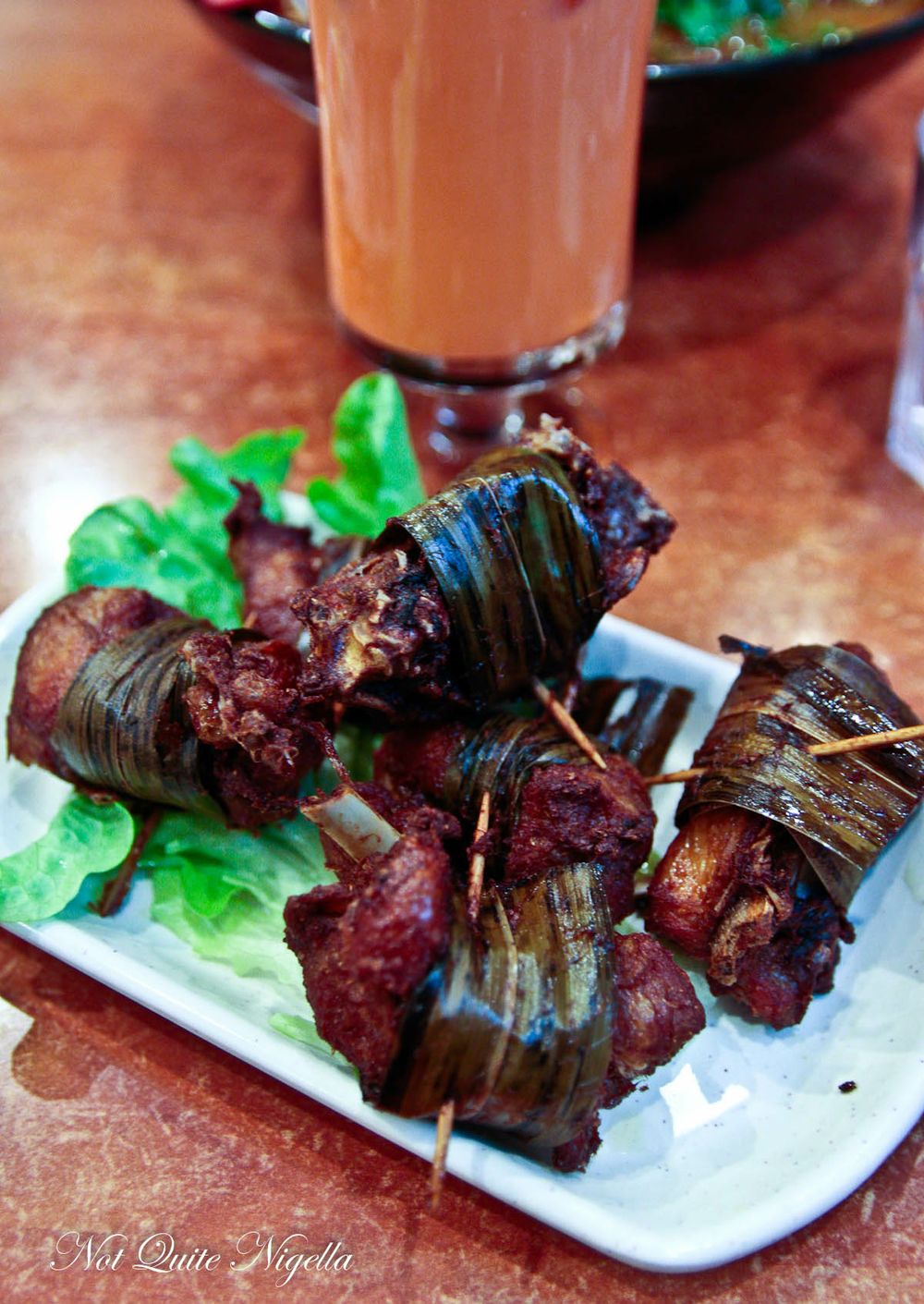 There were six pieces of pandan leaf wrapped chicken and they warn us (or actually Mr NQN ;)) not to eat the leaf on the outside. Unwrapping these, we eat the piping hot deep fried chicken on the bone which is moist and full of spices and flavour from pandan, lemongrass and ginger. 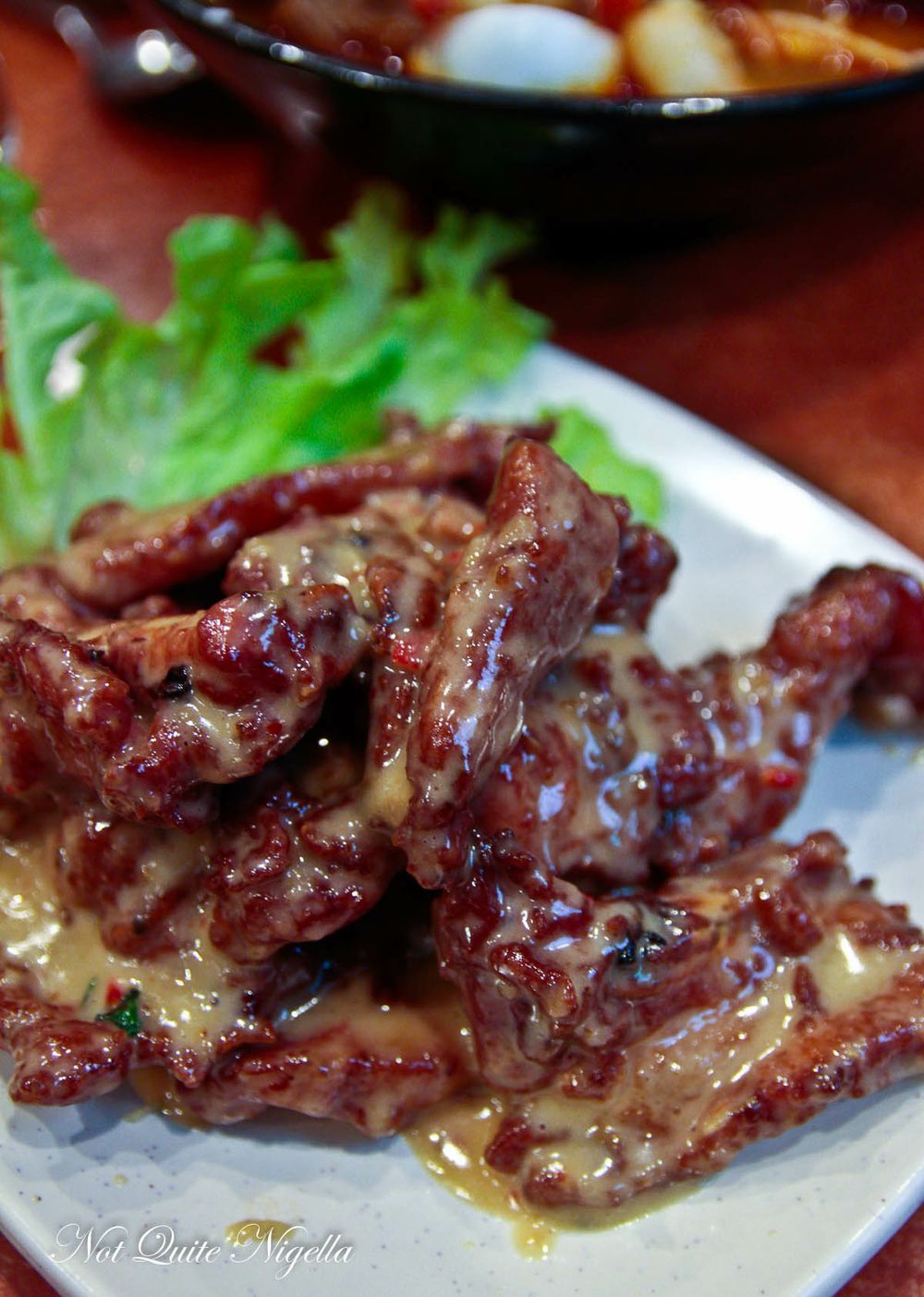 I  was tossing up between the milky, creamy pork rib and the Marmite pork ribs and the woman behind the counter recommends the former. I'm so glad that she did because they are such a flavour sensation. The milk is from evaporated milk and the sauce is also sweet but there's still a good balance of savoury there too. The pork ribs are marinated and then deep fried but retain a juiciness from the fatty cut and the sauce is a thick, creamy addition, perfect for the chicken or coconut rice. 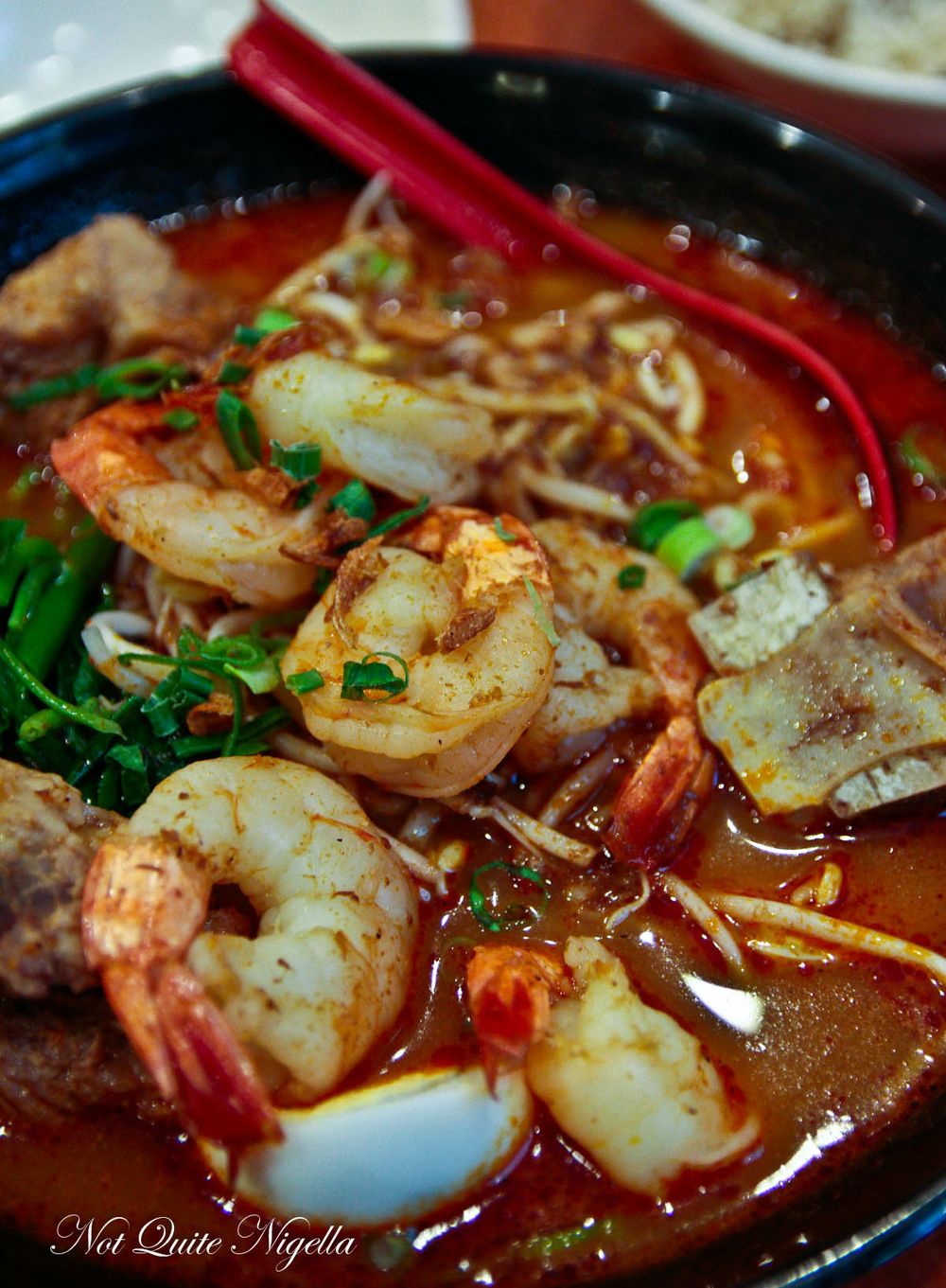 This was another recommendation from her and one that I delved into enthusiastically. It is made up of a heady, chilli laden seafood based soup with prawns and belachan that has a wonderful depth of flavour. There's so much going on here from the bean sprouts, two types of noodles (hokkien and vermicelli or beehoon), boiled egg, six prawns, three fat soft pork rib pieces and kangkong but the soup is what I keep going back for again and again. Mr NQN however finds this too fishy or prawny. 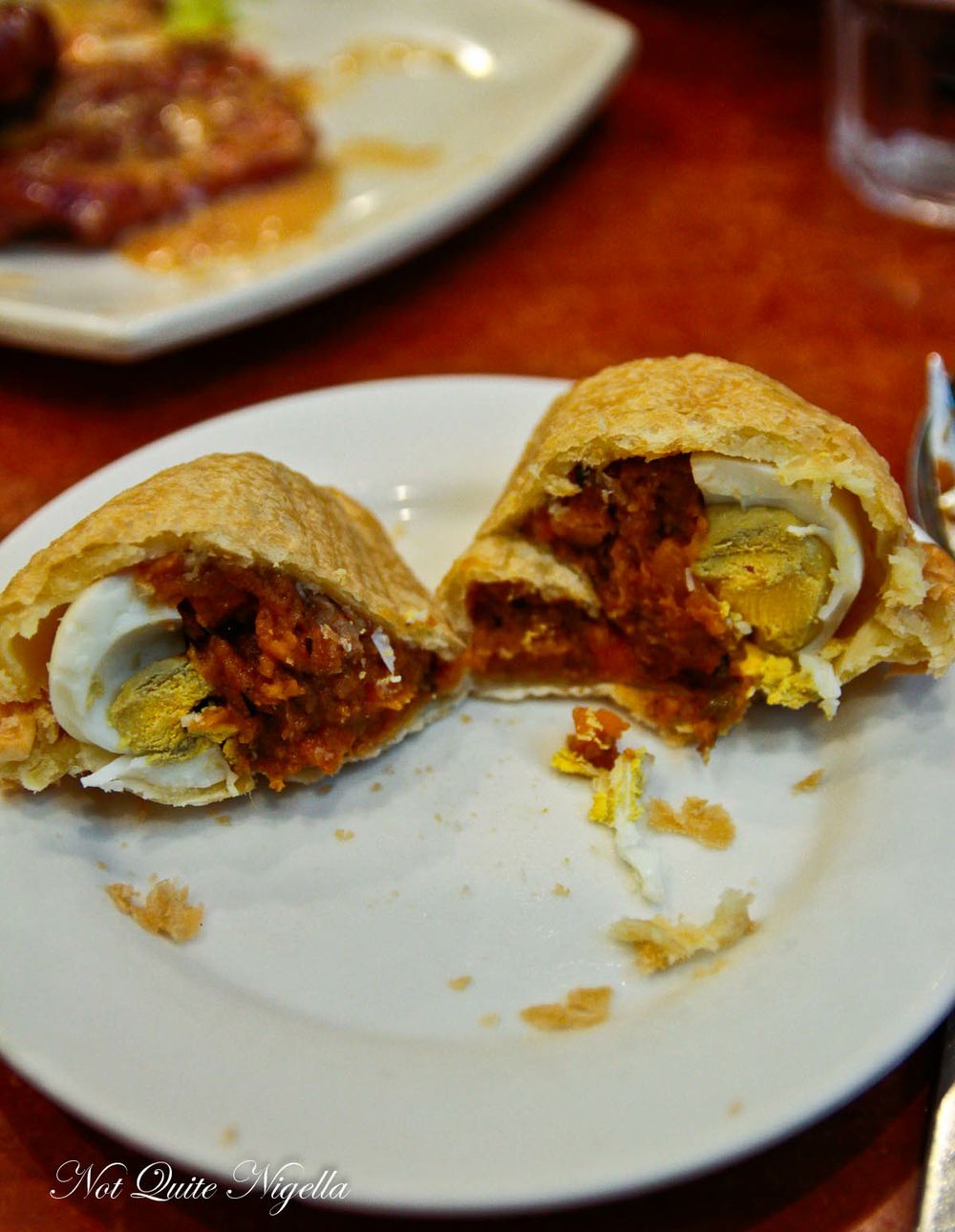 Halfway through we realise that the curry puff hasn't arrived so we ask for ours. The curry puffs are traded quickly as we watch as tray after tray containing dozens of enormously fat curry puffs goes from the kitchen to the front counter where takeaway sweets and curry puffs are sold. They're filled with a soft mixture of curried vegetables and a whole hard boiled egg. I usually prefer curry puffs hot and freshly cooked and these are a bit cold. 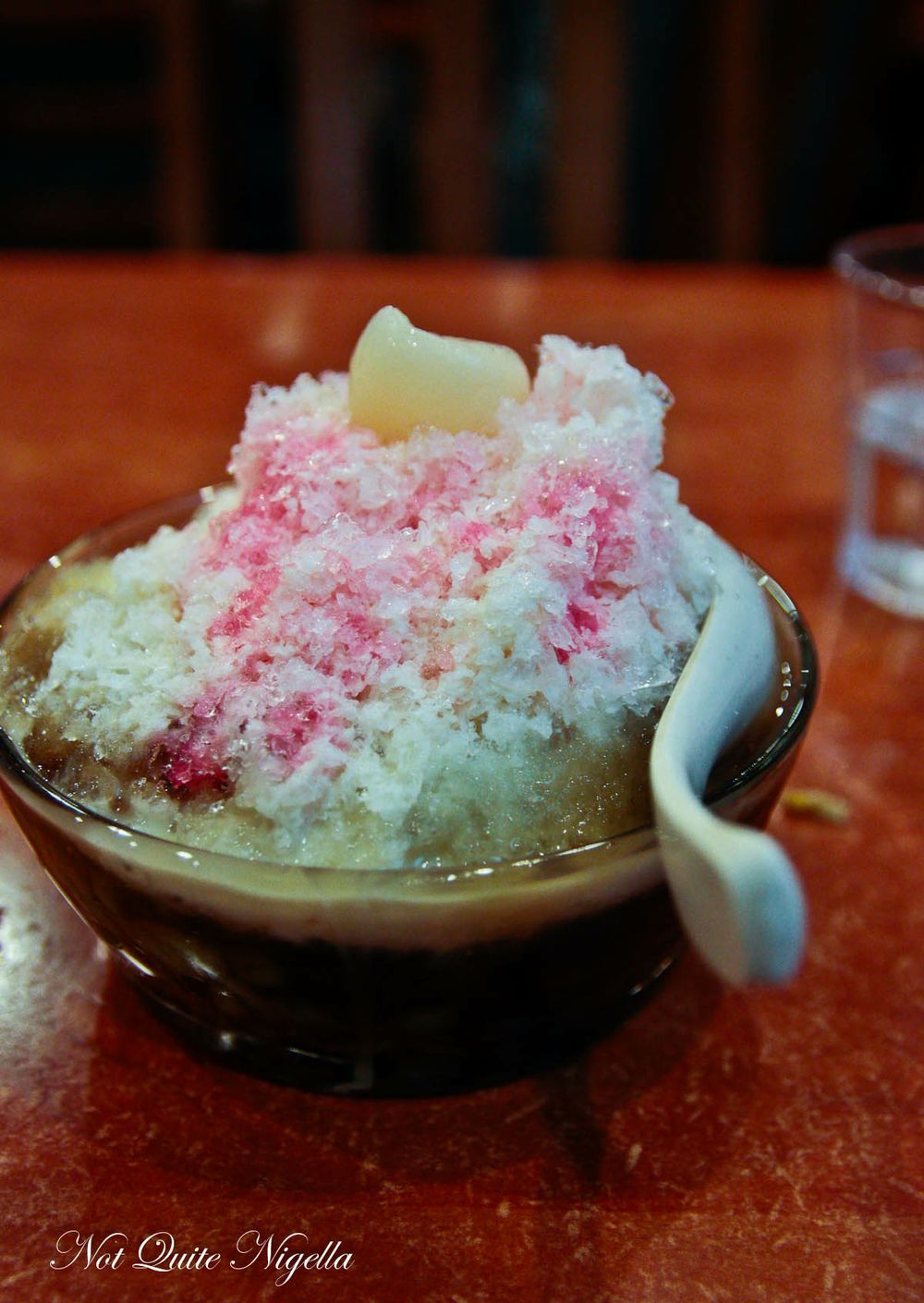 The ice kacang is ordered for dessert although there is a counter full of sweets ready in takeaway boxes. It's a bowlful of shaved ice with a sweet pink syrup, lychee, pineapple and condensed milk on top hiding a bottom layer of small grass jelly cubes, red kidney beans, creamed corn, palm sugar syrup and my favourite green wiggly cendon flour noodles. I like it a bit sweeter with more sweetened condensed milk but it was a refreshing end nevertheless.

So tell me Dear Reader, do you often take staff recommendations? And do you prefer drinks with or without ice?