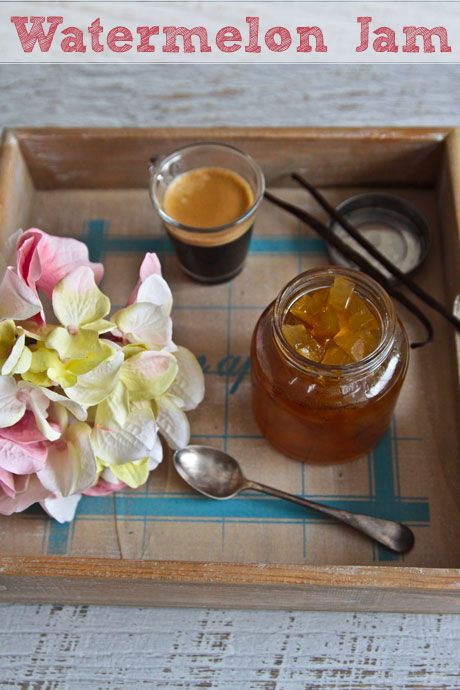 Someone once left a karaoke microphone behind at our place (if I were to hazard a guess when it was probably one of our theme nights) but since it doesn't connect to anything I use it to annoy Mr NQN by pretending to interview him and sing to him. I think he has hearing like a dog because his face cringes whenever anyone but certain people with perfect pitch sing. And that means that whenever I emerge from the study bedroom ready to sing at him he looks as though in pain.

That's because I cannot sing.

Sometimes he puts up with it for longer but sometimes he gives me a look that says "enough!" One evening I was making a jam and waiting for it to boil and I was killing time while waiting for it to finish. A recent trip was postponed due to a cyclone so I found myself at home alone for most of the day. I tend to get so excited when there's an actual human in front of me so I talk a million miles an hour. So I combined the two and interviewed Mr NQN on my karaoke microphone about the jam. 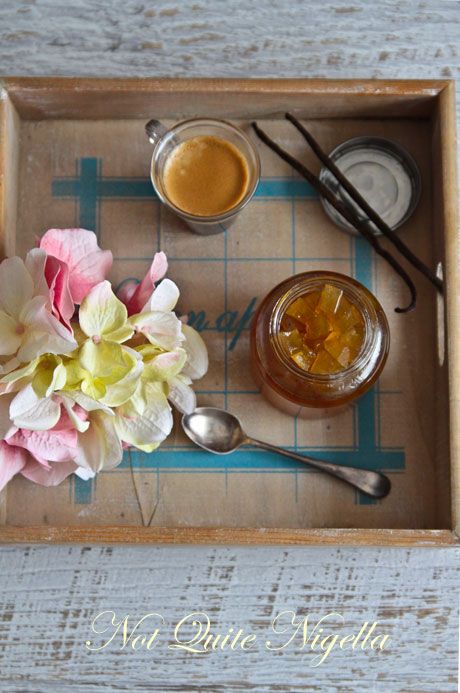 Let me tell you about this jam or really, a preserve. From Macedonia, slatko as it is known, is a jam made up of the white part of the watermelon that we usually discard. I first tried it at an Elliott gathering. Our brother in law Laporello is Croatian and his parents came over to cook for their wedding. One day when we dropped something off, his mum was making this with the summer fruit that we had a glut of and I was fascinated by how unusual and delicious it was.

He tells us that you have a tablespoon of it first thing in the morning with a glass of water or very bitter coffee.  It is extremely sweet (the name slatko translates into sweet) and it is also made with cherries and apricots but since we have so much watermelon at the moment I wanted to try it with that. Don't expect the jellied texture of a traditional jam. This is cubes of sweet watermelon rind in syrup, hence why there isn't any pectin added. 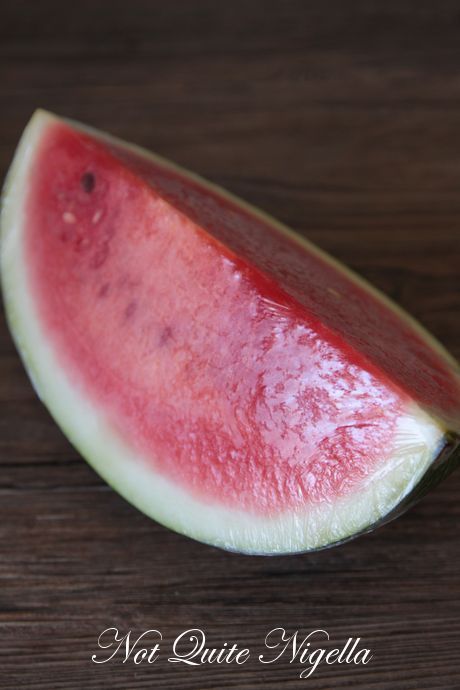 There was the bonus of making something out of something that would have been discarded. I hate to waste food (see banana skin cake) and if it is perfectly edible I'm willing to try and see what it tastes like. The sample that Laporello's mum gave me was so delicious I wanted to make it again. So one hot summer's day I sliced up the watermelon separating the white (pith) and green (rind) from the red part (best to slice it before teeth get into it for sanitary reasons) and then cut it up.

You then leave the pith and sugar for a few hours til it forms a syrup and then you boil it down with vanilla, cinnamon, lemon and cloves or whatever flavours you like. The pieces turn into sticky, translucent golden cubes bathed in a lovely honeyed liquid. The key to a good slatko is to have the pieces with some texture so that it isn't mushy. I made mine less sweet than usual halving the sugar quantity (it is usually one part sugar to one part fruit). We had this on top of natural yogurt, on top of oatmeal, in place of other jams and even, in times of morning haste, with a cup of coffee. 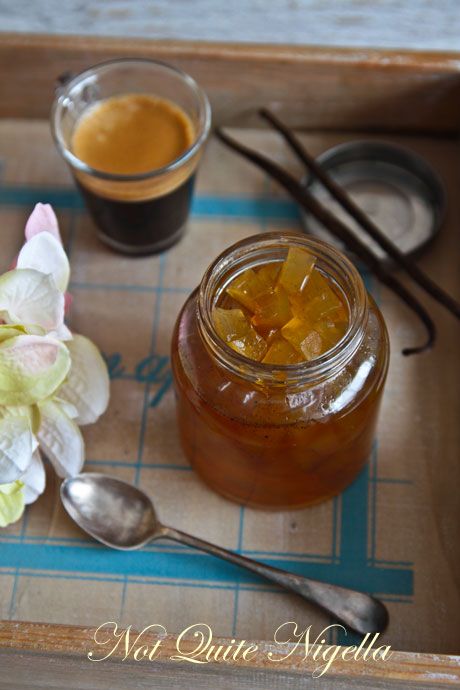 Holding my microphone I brought some over to Mr NQN to pretend to interview him about it.

Me: So how are you this evening honey?

So tell me Dear Reader, can you sing and do you do karaoke? And do you like to make preserves or jams? 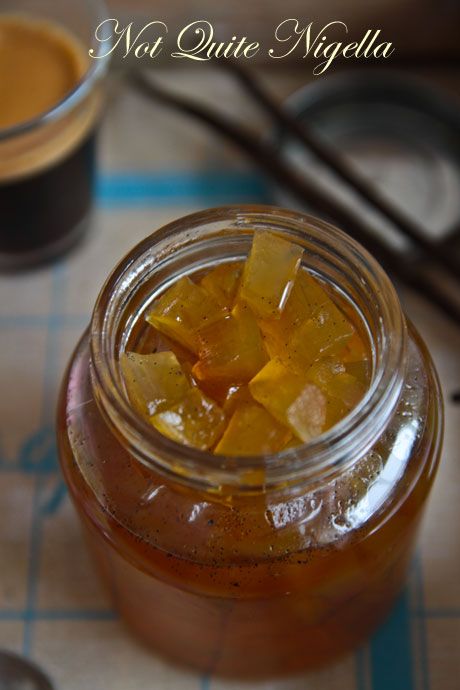 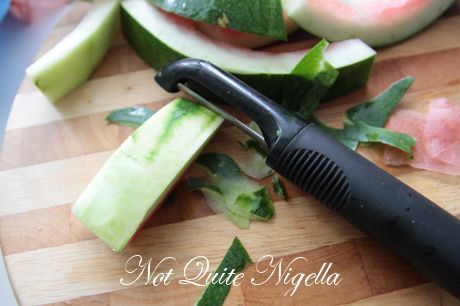 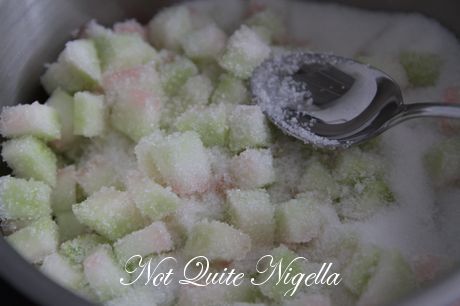 Step 1 - Remove the green skin from the watermelon and the red part of the watermelon leaving only the white part. Cut into 1cm/half inch cubes. Measure how much this makes and place this in a saucepan. Then measure half of that amount of sugar and add this to the pan (it is basically 2 parts fruit to 1 part sugar). Without turning on the stove, leave this to stew for a few hours or overnight at room temperature - the watermelon and sugar will develop a liquidy syrup and mine took about 2-3 hours to do so. 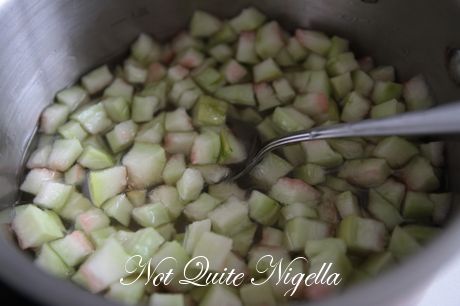 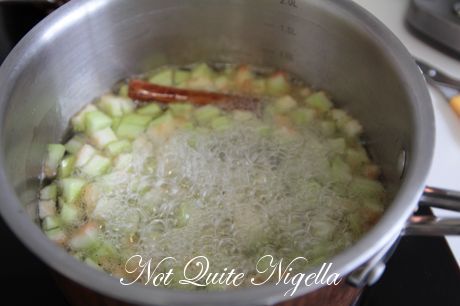 Step 2 -  Set to simmer, stirring to dissolve all of the sugar and then add the remaining ingredients, the lemon juice and peel, the vanilla bean, cinnamon stick and cloves. Simmer for 2 hours covered and then for the last 15 minutes take the cover off to reduce the syrup. It is done when the cubes are translucent. While still hot, ladle into sterilised jars* and then tighten lid (using a teatowel as the jar will be hot). Turn upside down for a minute to create a seal and then place right side up. 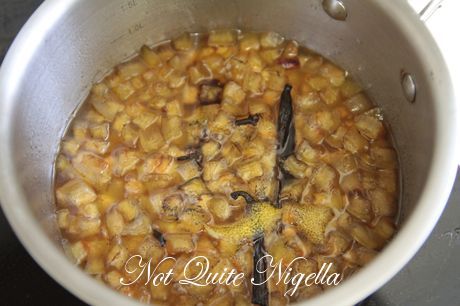 It becomes a golden honey colour 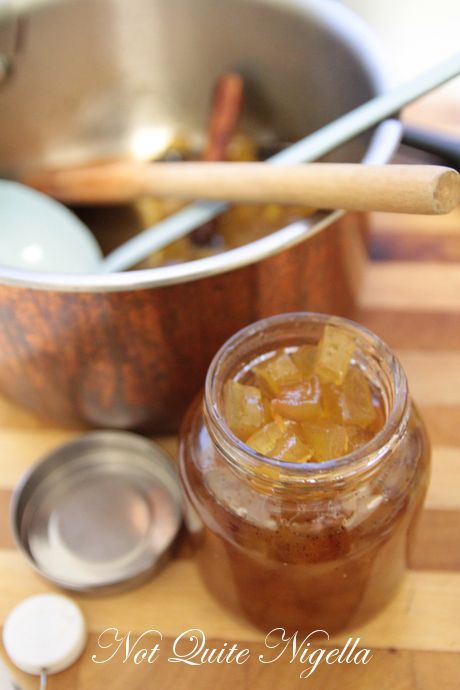 *To sterilise jars, heat glass jars and metal lids in a 180C/350F oven for 10 minutes and allow to cool ensuring that you dont touch inside the jars or lids.