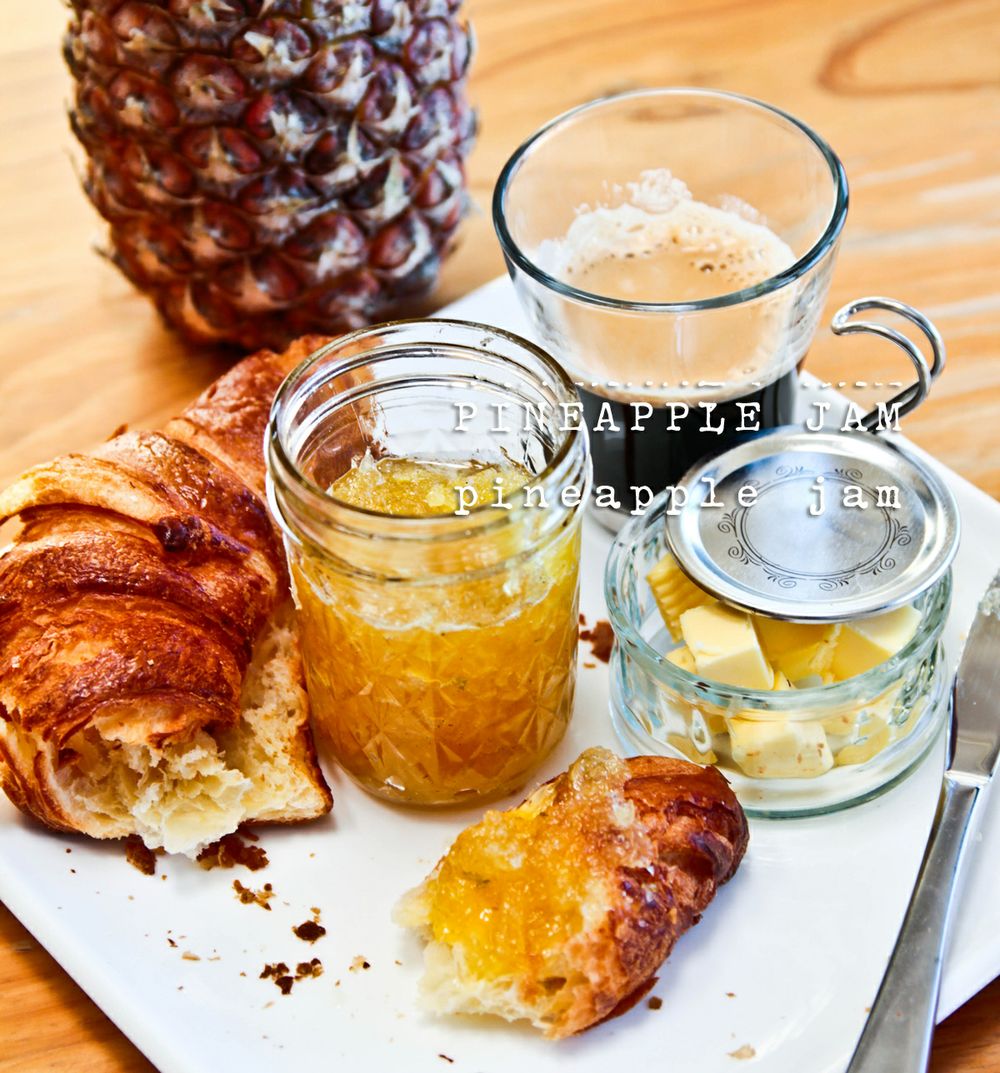 When I was a teenager we had two school formals. One was at the end of year 10 and the other at the end of year 12. The year 10 formal was looked upon as the practice run but no less important that the final year 12 one. To get ready for a formal was a big deal. My then friend had an uncle who was a hairdresser on Oxford Street in Paddington and as we were getting ready at her place after school, I went with her to the hairdresser while she got her hair done.

I was busy reading magazines on the couch while her uncle tended to her hair. I looked up about thirty minutes into it and she was looking uncomfortable and there was a lot of hairspray action happening. I looked at her hair and I could see that he was building it up to become some sort of enormous tower, slightly on the side of her head. To make matters worse, he was crimping it so that it was huge and voluminous while tutting that he had to do something about her thin, blonde hair.

"What do you think?" he said asking me while presenting her hair with a flourish. 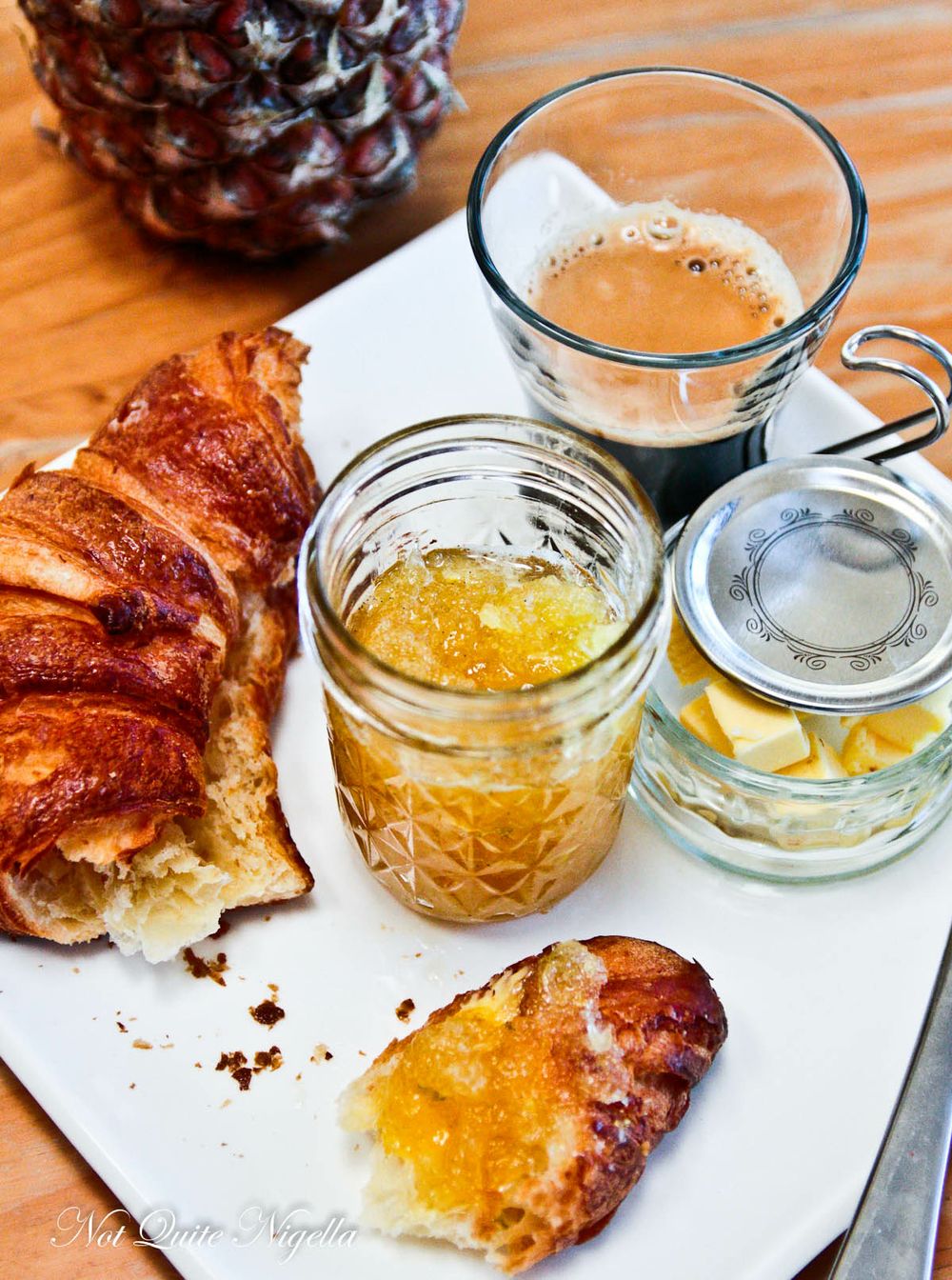 "It looks like a...pineapple?" I said because well, it did and there was nothing else I could say except for perhaps lie and I did think that at times like this, friends tell others the truth. They do not want to walk into a school formal sporting hair like a pineapple.

He snorted and went onto his next customer while my friend and I went home. She went straight into the shower and washed her hair and got rid of the enormous blonde pineapple immediately. Then she turned to me and said "That never happened ok?" with a furious urgency (she was really quite crazy it turned out later). And we never spoke of the pineapple hair again.

Speaking of pineapples, Mr NQN was given two for his birthday -one was ripe while the other one was green. I decided that I would make one into jam as we were about to go away the next day and didn't have time to eat a whole one. Pineapple itself is actually quite low in pectin, the ingredient that sets the jam but I thought that we could do away with it completely as the consistency of the grated pineapple makes it ideal for spreading. Adding a few delicious spices helps and lime zest lifts it too. I made this at my friend Louise's house and we essentially just played with flavours adding what we liked and what we felt it needed. We then spread it on a croissant and served it to Mr NQN and Viggo.

They both loved it-Viggo even gave it his ultimate compliment of smacking his lips together appreciatively. I was so pleased that I offered Louise and Viggo the larger jar to keep which caused Mr NQN to protest. I think he will just have to be a bit more demonstrative perhaps when there is pineapple jam at stake ;)

So tell me Dear Reader, would you have been honest with your friend if she had pineapple hair? 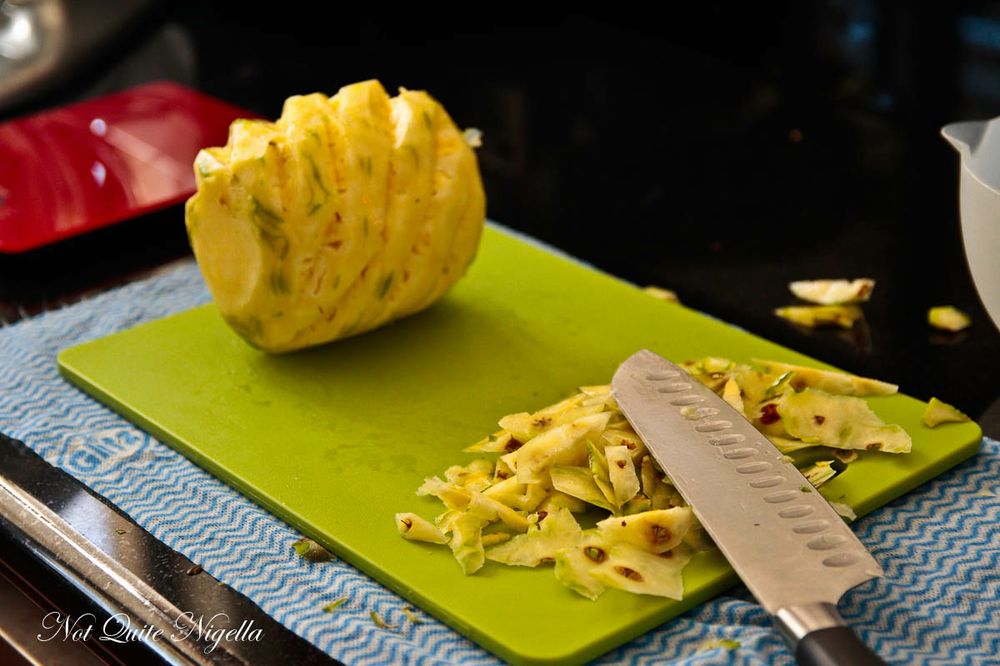 Step 1 - Remove the top, bottom and skin from the pineapple including the eyes. Grate the pineapple flesh and juice into a large pot-I got about 868 grams from the one pineapple. 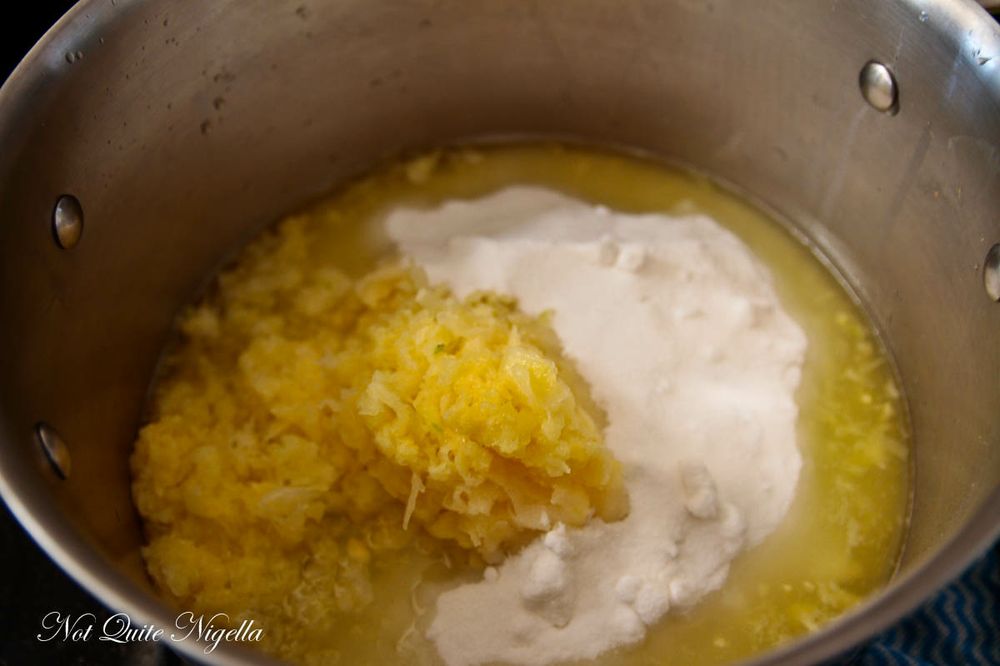 Step 2 - Add the sugar and water and heat on the stovetop until you get a rolling boil. Turn down and simmer for 20 minutes until the pineapple turns translucent. Skim the scum off with a slotted spoon. I usually sterilise the jars during this time and leave them in the oven. 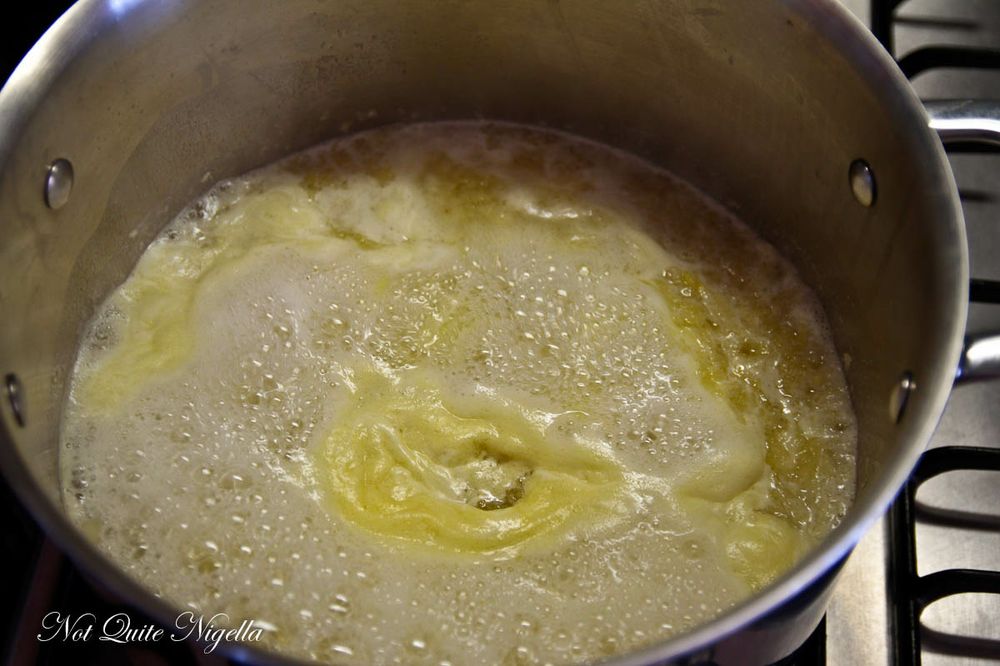 Skim off the scum

Step 3 - Meanwhile use a small saucepan to heat the star anise to release the flavours. Once fragrant, remove from heat and place in the jam. When the jam starts to look translucent add the vanilla bean paste and continue to simmer lightly until syrupy and translucent. 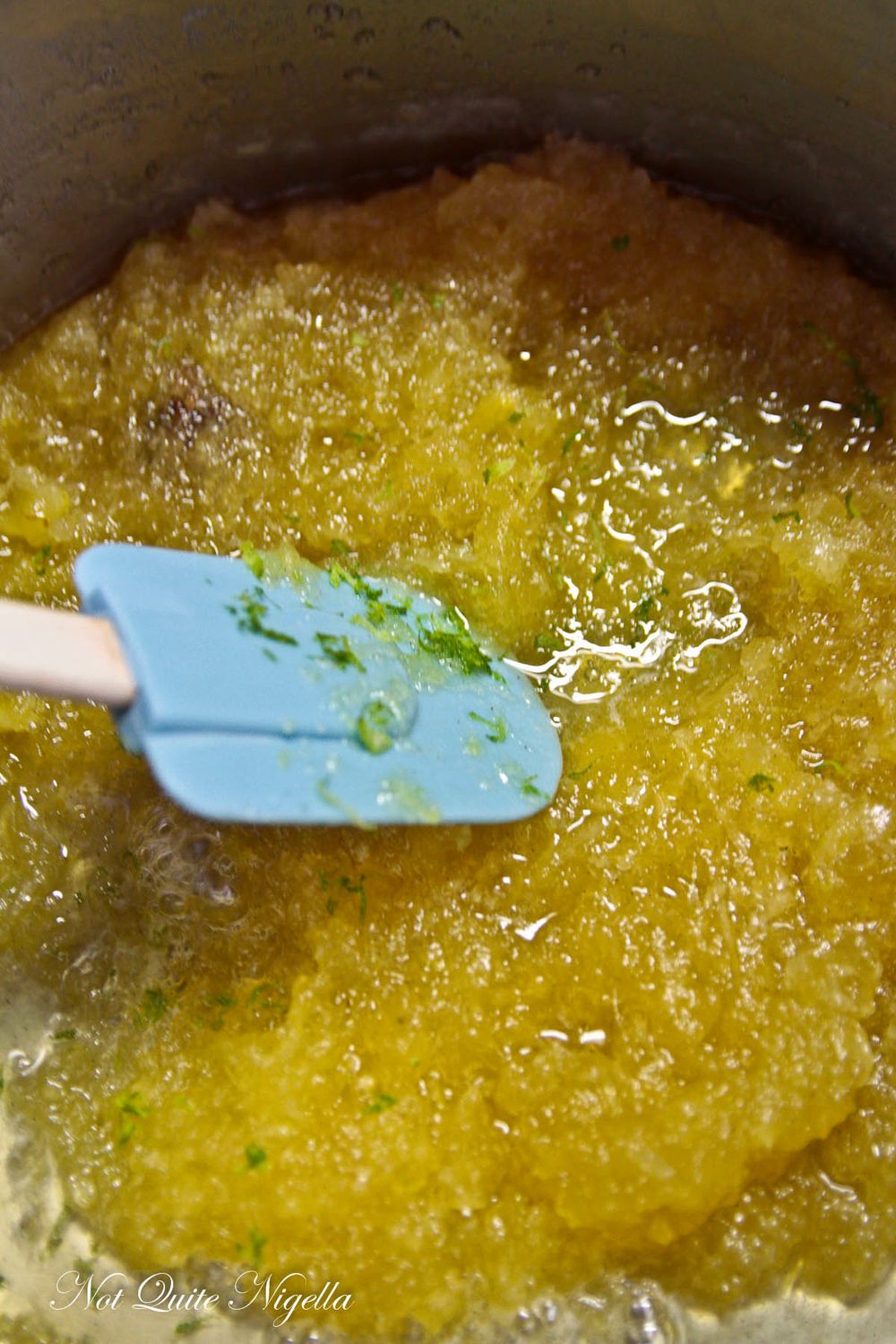 Step 4 - Remove the jam from the heat. Add the finely grated zest for the lime and taste-it may need a little more or less lime. Ladle into the still hot jars leaving a 1cm/0.5 inch gap at the top. Secure the lid tightly and turn upside down for 10 minutes to create a seal. 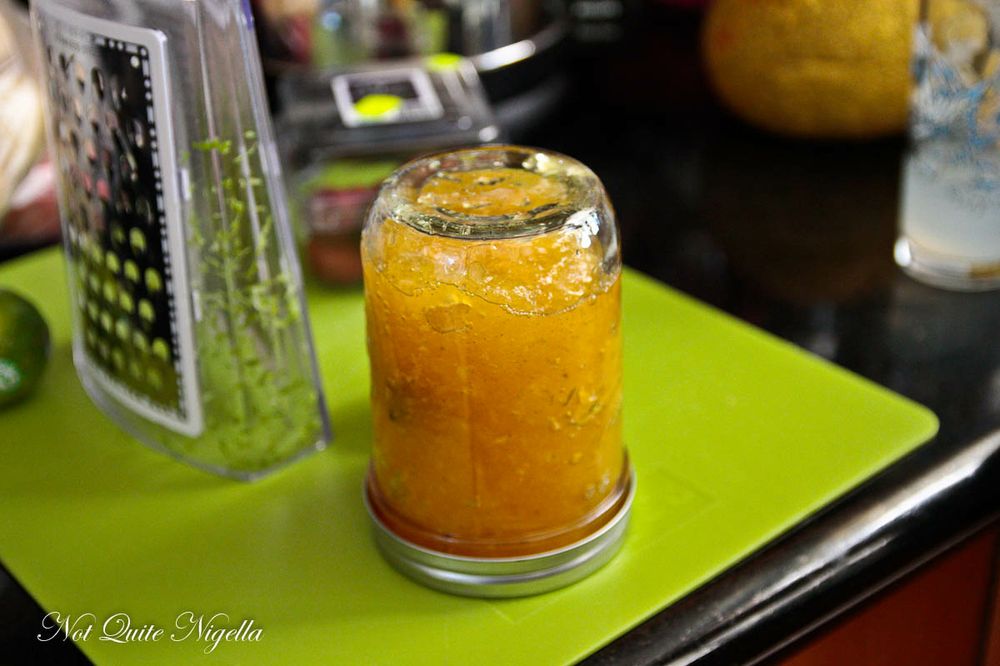 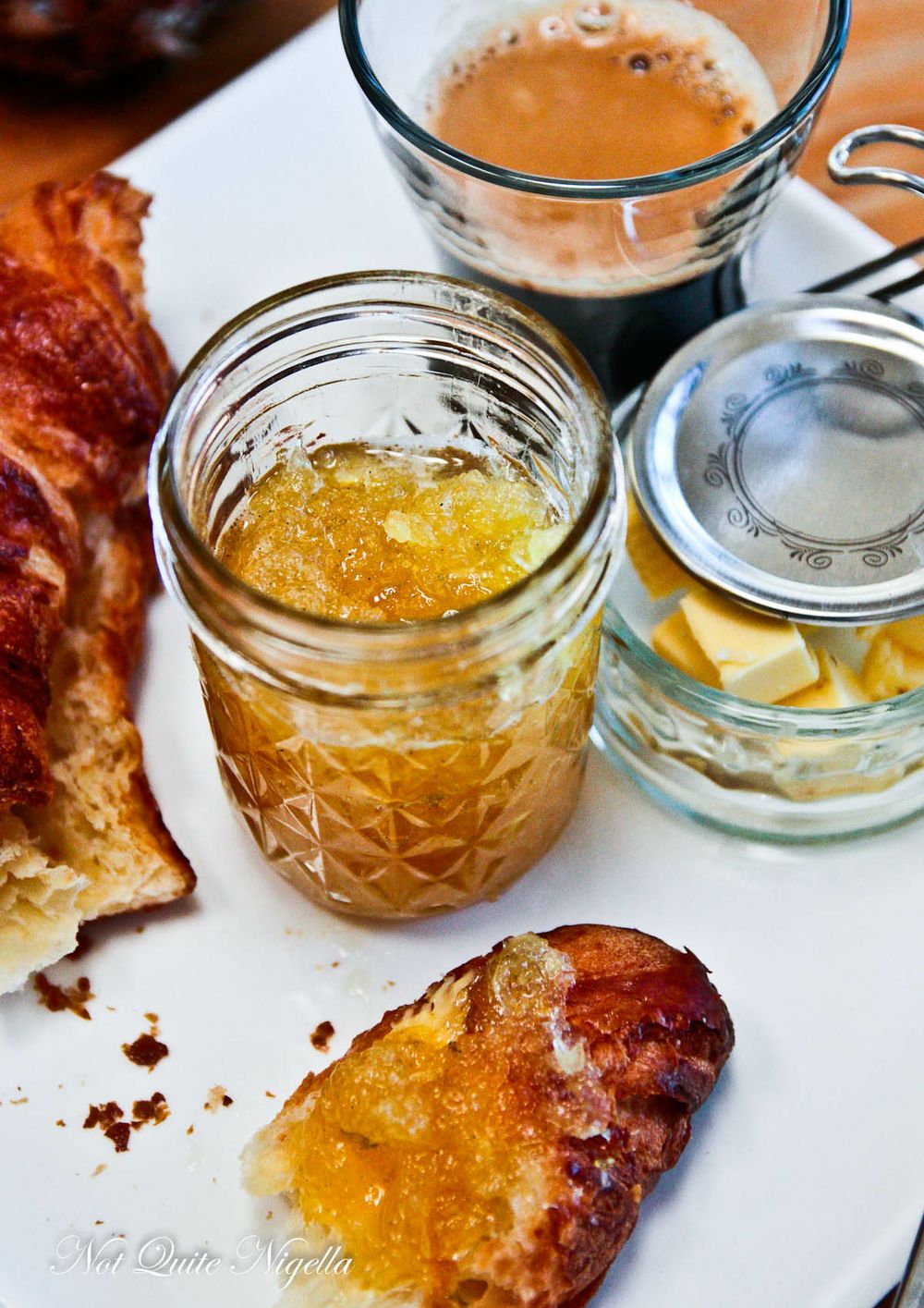