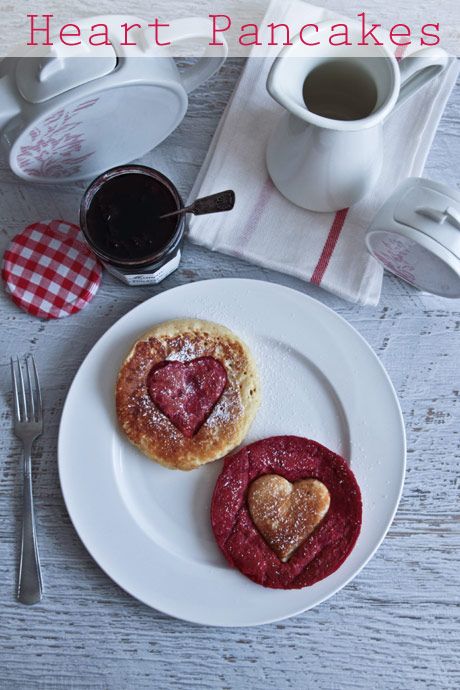 I was a tomboyish child. When I was around seven years old all I wanted to do was wear shorts and a tshirt and eschew any form of prettiness. I never looked in the mirror, nor combed my hair and cared not a jot what I looked like. Pink was ghastly and anything girly or feminine was considered rather stupid.

I'm not quite sure what happened but that turned around 180 degrees. 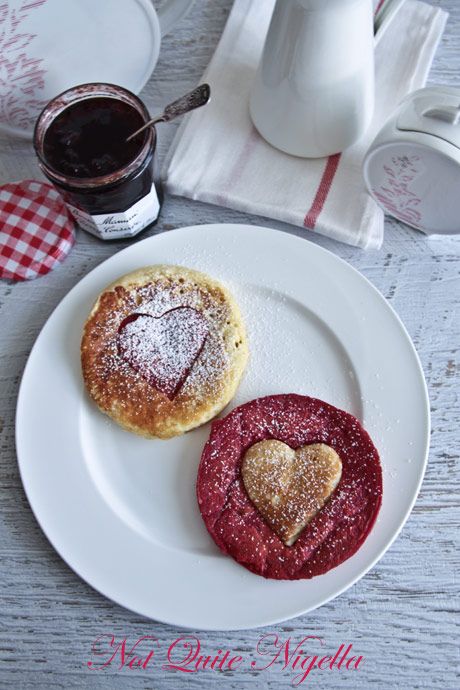 Now I call myself Emily Howard (the overtly feminine transvestite "lady" from Little Britain). If something is pink or shiny I will coo and want to possess it and even better if it has flowers, butterflies or hearts on it.  Mr NQN doesn't particularly like the excessive Emily Howardness of my taste and while shopping one day I tried on a pair of heart shaped glasses and Mr NQN laughed at me so hard that I refused to speak to him for about an hour until he bought me a sweetie. "I thought you were being silly and trying to be funny" he said confused. 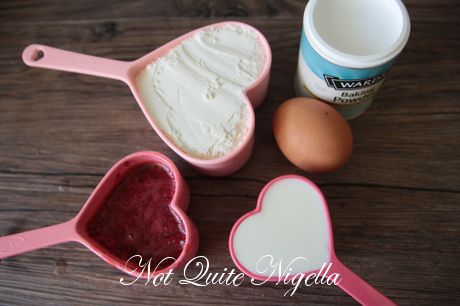 No doubt he will be non-plussed by these pancakes that I will serve him up but even if your taste does run to the less feminine, I have to tell you that these fluffy pancakes are absolute must trys. You don't have to make them into hearts-you could certainly just make one large batch of round raspberry and vanilla pancakes if you don't want to bother with the extra detail. These are my favourite pancakes ever and if you happen to be staying over at our place I would make these for you in the morning.

The secret to them is that they are made  even fluffier than normal adding an extra teaspoon of baking powder to the mix so that they rise proudly-almost like a crumpet or a donut. I adore how vanillaey the regular ones are and go rapturous over the light texture and I really liked the true raspberry flavour of the raspberry pancake. Unlike other pancake batters, you don't really have to rest this and it is good to go as soon as it is all whisked in together. All I would do is serve these with a runny, sweet cherry jam and some whipped cream and if you feel so inclined to have a pre Valentine's day breakfast this weekend this might be for you. But don't just believe me, try these for yourself, after all you might not want to believe someone that has heart shaped glasses ;)

So tell me Dear Reader, were you a tomboy as a child? And what is your favourite colour now? 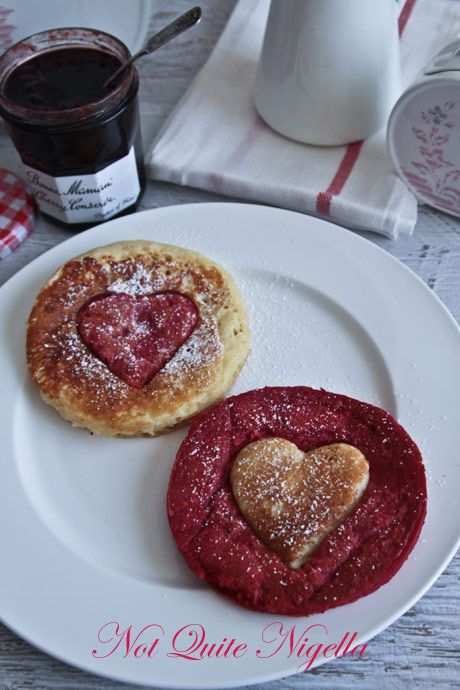 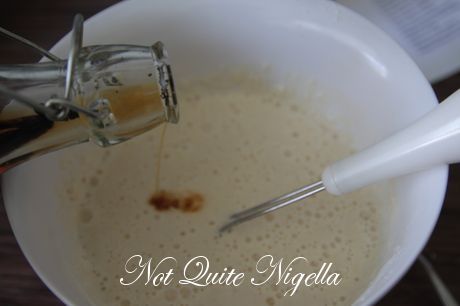 Step 1 - In a bowl mix whisk the flour, baking powder and salt until combined. In a jug, measure the milk, vanilla and add the egg and whisk together. Made a well in the centre of the flour mixture and then slowly pour in the milk mixture whisking to avoid any lumps. This should make 2 cups of batter. 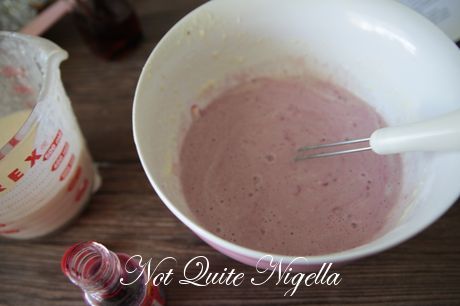 The batter shade without food colouring

Step 2 - Separate batter in two halves-I measured 1 cup back in the jug and left the remaining cup in the bowl. Into one of them, whisk in the raspberries and food colouring if using-without the food colouring the colour will be a purple shade. 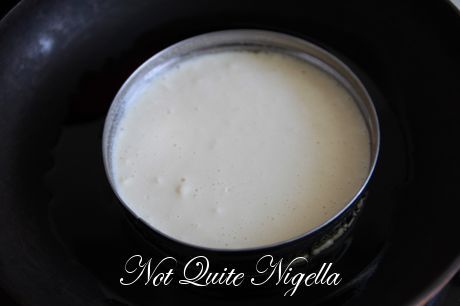 First pour in the batter 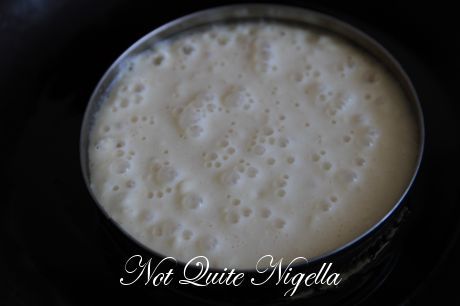 When it is ready, the top will bubble and the batter will pull away slightly from the side of the cutter 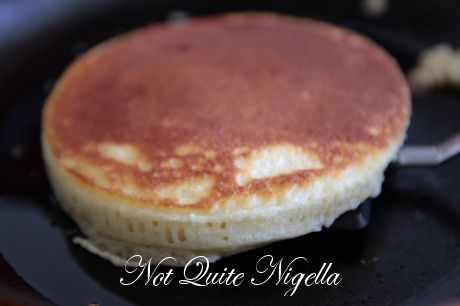 Look how crumpetty it looks! 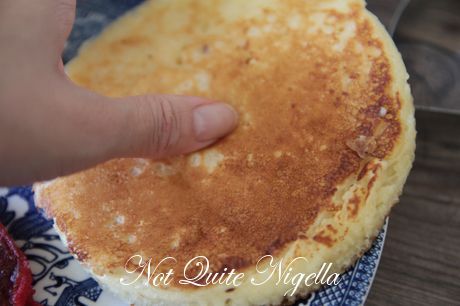 Testing for doneness by pressing down in the centre

Step 3 - Heat a frypan on medium to low heat and spray the inside of the cutter generously with non stick oil spray. Add oil in the frypan once hot and place the round cutter in the pan and pour in half of the plain white batter-you should get two fluffy, thick American style pancakes with this batter. Put the lid on and watch that it doesn't burn. When bubbles appear, pick up the pancake, cutter and all and using an egg flip, turn it over and cook on other side. Test for doneness by pressing down gently in the centre-if it feels squishy like there is still raw batter there, keep cooking it. The centre should spring back to the touch. 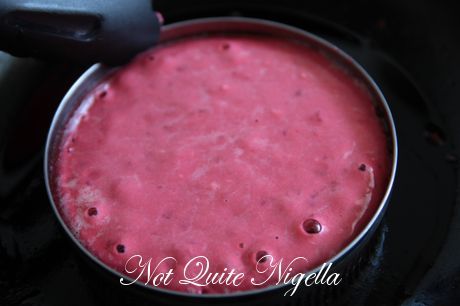 Step 4 - Turn down the heat a touch lower and repeat the process for the raspberry flavoured pancakes but this time you'll get three pancakes out of the mixture with the extra amount of raspberry in the batter. Take your pancakes and using the heart cutter, cut out a heart from the centre of each round and slot it in the centre of the other. Dust with icing sugar and serve with jam and cream! 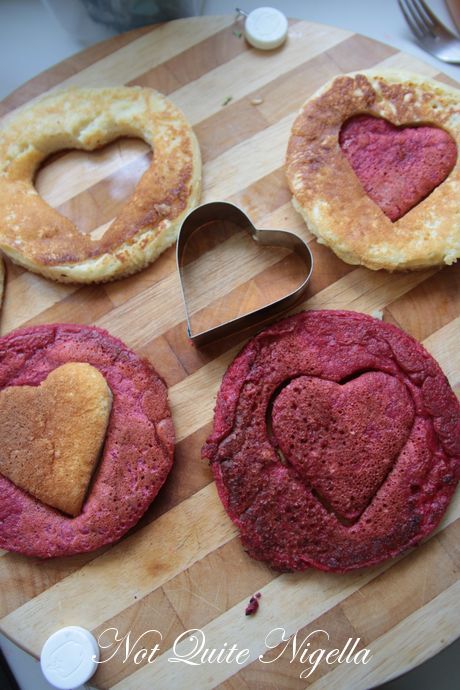 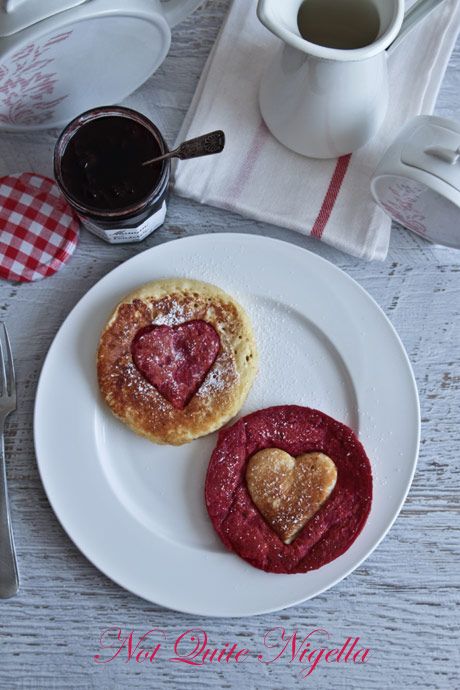