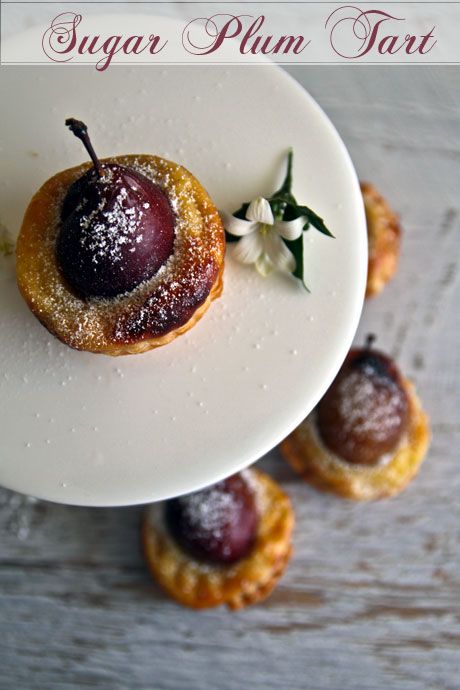 I usually warn people that when we have dinner parties, they will usually conclude not with the fishing of key chains out of a bowl but with a raucous game of charades. It is a favourite game as it requires only a vague amount of general knowledge and people can draw or act out to their heart's content.

Of course Mr NQN likes to make people do things that they don't want to do and inevitably there will be Tuulikki trying to act out "meat" or one of the sisters pulling out the name of a famous adult film star out of the hat. One night he wanted to find out who knew of adult film star Jenna Jameson. His sweet, younger brother The Assman suddenly yelled out "Jenna Jameson!" and his mother Tuulikki turned to him aghast. Her youngest son knew who this adult film actress was? 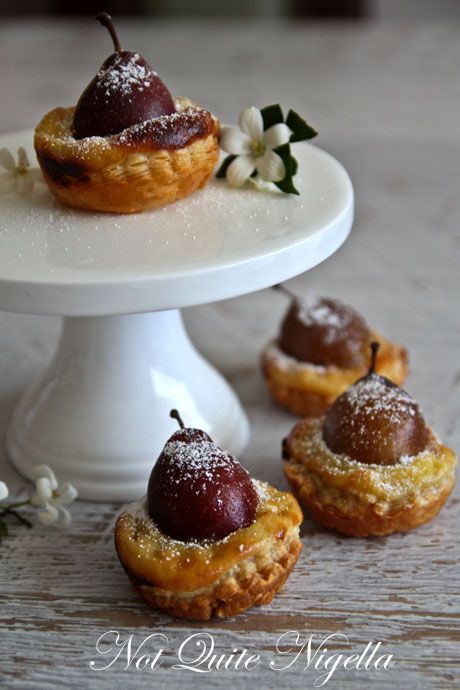 Hands reaching up into the sky she cried "How, how do you know this woman? Did your ex girlfriend make you watch this kind of film???" and we all fell about laughing. We had to explain that her youngest son, her baby, was actually 25 years old and probably came across "this woman" on his own.

There was an unexpected measure of revenge for Mr NQN who pulled out "sugar plum." Unable to use the Strasberg acting method to portray a plum he resorted to pointing to his bum and cradling his ear trying to show people that it rhymed with bum. People took a torturous amount of time before guessing the correct word and finally arrived at sugar plum. 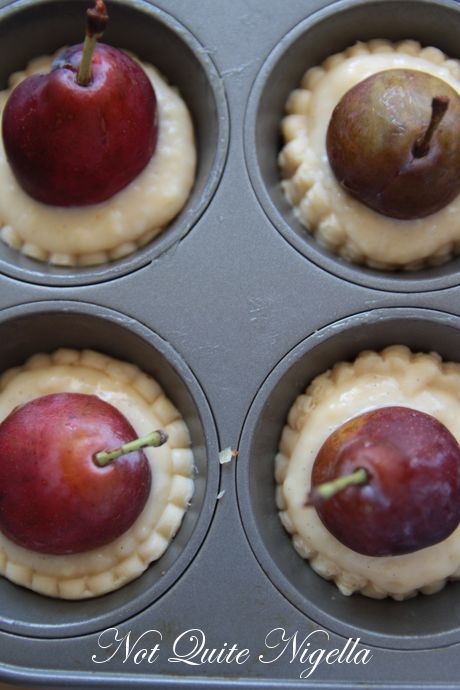 Speaking of sugar plums, these gorgeous little morsels come around after Christmas every year until April I look forward to them as they are sweet little fruit that are made that much more magical through their association with The Nutcracker. These are not to be confused with other sugar plums which are a dried fruit and nut confection that is also lovely. Tear drop shaped, they have a dark maroon or green skin with a golden yellowy sweet flesh and an apricot sized stone in the centre. 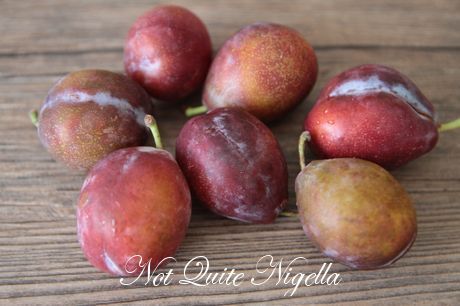 After plans were made for an impromptu picnic, I awoke early on the Sunday and decided to make some small vanilla custard sugar plum tarts to take with us rather than buy something. The custard I used was based on the sweet vanilla custard in Portuguese custard tarts as it is sweet and thick and I used up the last of the Carême puff pastry that I had in my freezer. They were done quickly and the thicker pastry was crunchy and buttery and shattered against the softness of the baked fruit and the sweet, thick vanilla custard.

And it didn't involve any obscene acts or bum pointing!

So tell me Dear Reader, are you good at games or are you more of an observer? And what fruit are you really enjoying from this season's bounty? 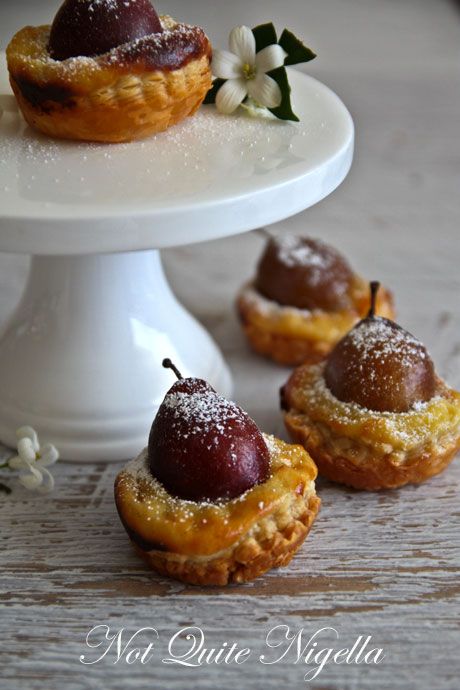 You will also need a cupcake tray or 12 small ramekins 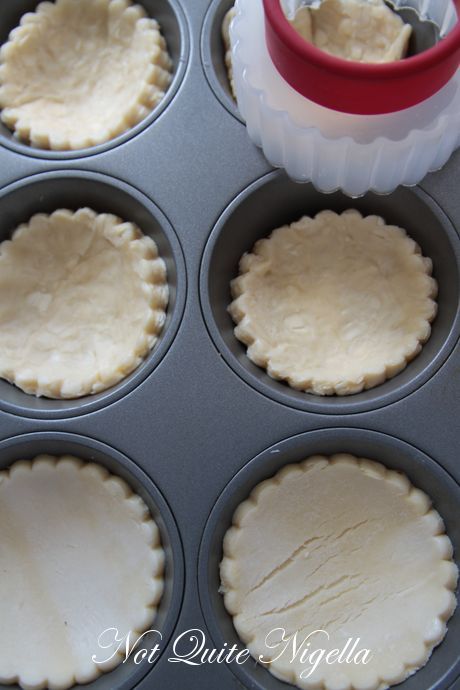 Step 1 - Grease the cupcake tray holes with butter so that the tarts don't stick. Then cut out the pastry using a round or fluted pastry cutter-you may want to double up on the sheets if you are using a puff pastry like Pampas which is thinner than Careme. Re-roll scraps to make more rounds. Gently push these rounds into the cavities of the cupcake tray making a concave pastry dish. Place the tray in the refrigerator to rest. 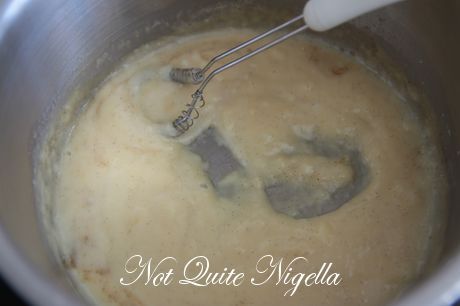 Step 2 -  Make the vanilla custard (this can be done ahead of time). Place the eggs, sugar and cornstarch in a small saucepan and whisk well to combine. Then add the milk and slowly heat, stirring constantly to ensure that the custard doesn't catch on the bottom of the pan and also to create a smooth consistency. Add the vanilla and remove from heat once thick and voluptuous-it shouldn't be runny at all.

Step 3 - Preheat oven to 200C/400F. When ready, take out the cupcake tray from the fridge and dollop in the custard -not too much so that it overflows as you are going to place a whole sugar plum in the centre. The top with the whole sugarplum (you don't need to pierce it or peel it unless you want to). Bake for 20 minutes.

Step 4 - A little tip I have for getting these out: as soon as these are baked and you remove them from the oven, run a sharp knife around the edge to push back the custard which can really stick to the tin when it cools.  Dust with icing sugar and serve with a cup of tea or coffee. 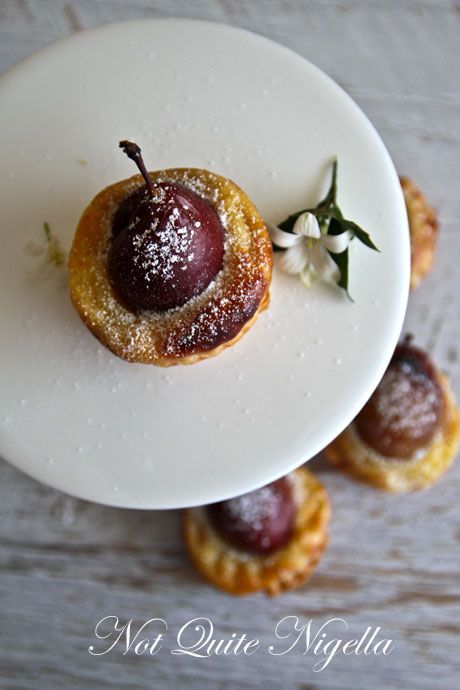