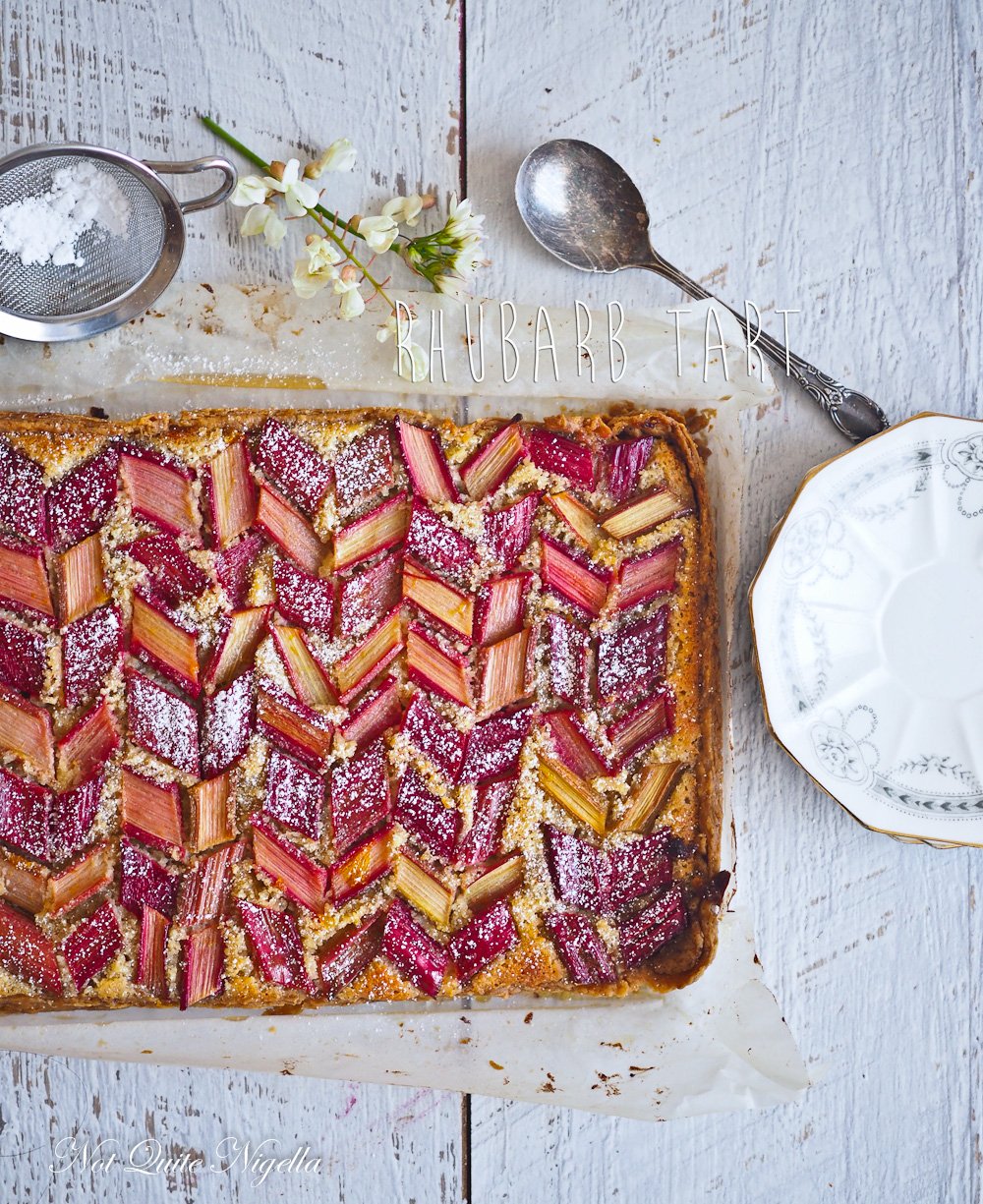 Want to make a knockout dessert using new season rhubarb? This rhubarb tart is a beauty. It starts with a crispy browned butter cookie base topped with a rich almond fragipane layer. The final flourish is a orange and sugar drenched chevron pattern of rhubarb!

I had been wanting to make this tart ever since I saw it on Instagram. Mine wasn't anywhere near as pretty or neat as Dimity's. I really did struggle with the chevron pattern and trying to match it up (I'm pretty sure that this is like an I.Q. baking test). In fact I was so dismayed by my efforts that I was actually going to start all over again. You see I had been gifted a big bag of farm fresh rhubarb from Louise and Viggo who had stopped by and delivered it along with a massive bag of enormous grapefruit. 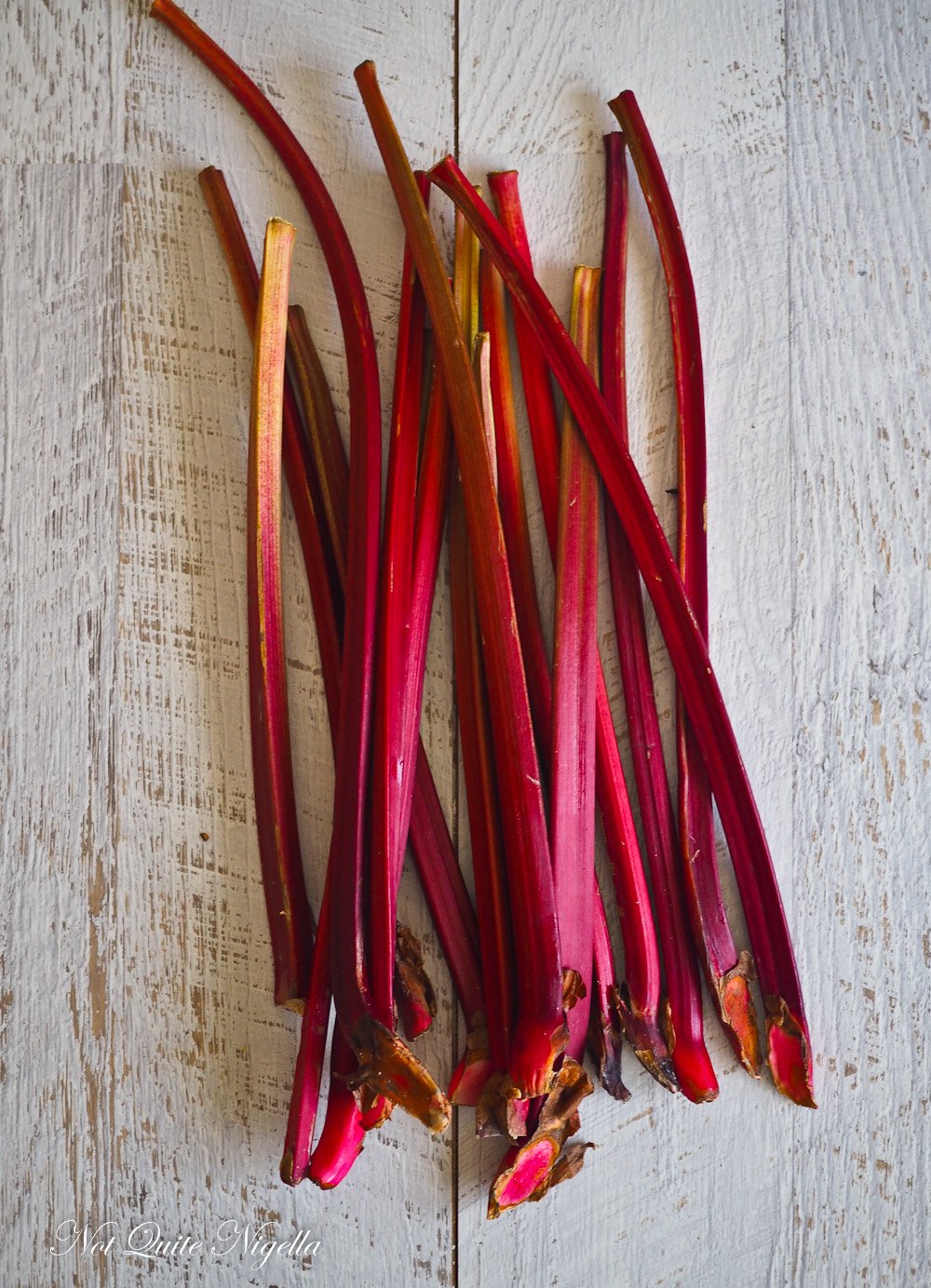 But then I tasted this tart. And it was so damn good that I made another with the rest of the rhubarb that I had and didn't bother changing a thing! I gave one to a friend Belinda that loaned me her pasta maker for Halloween and kept one for ourselves. She described it as "to die for" and loved the contrast of the tartish rhubarb with the creamy base.

I can't say that I did much better with producing the chevron pattern but that's clearly beyond my capabilities. This rhubarb tart is nutty, crispy, fresh, creamy and tart all in one. And yes Dear Reader, this is a pushy recipe if you love fruit tarts with a balance of richness. I really could not stop eating this warm from the oven with a dollop of sour cream. 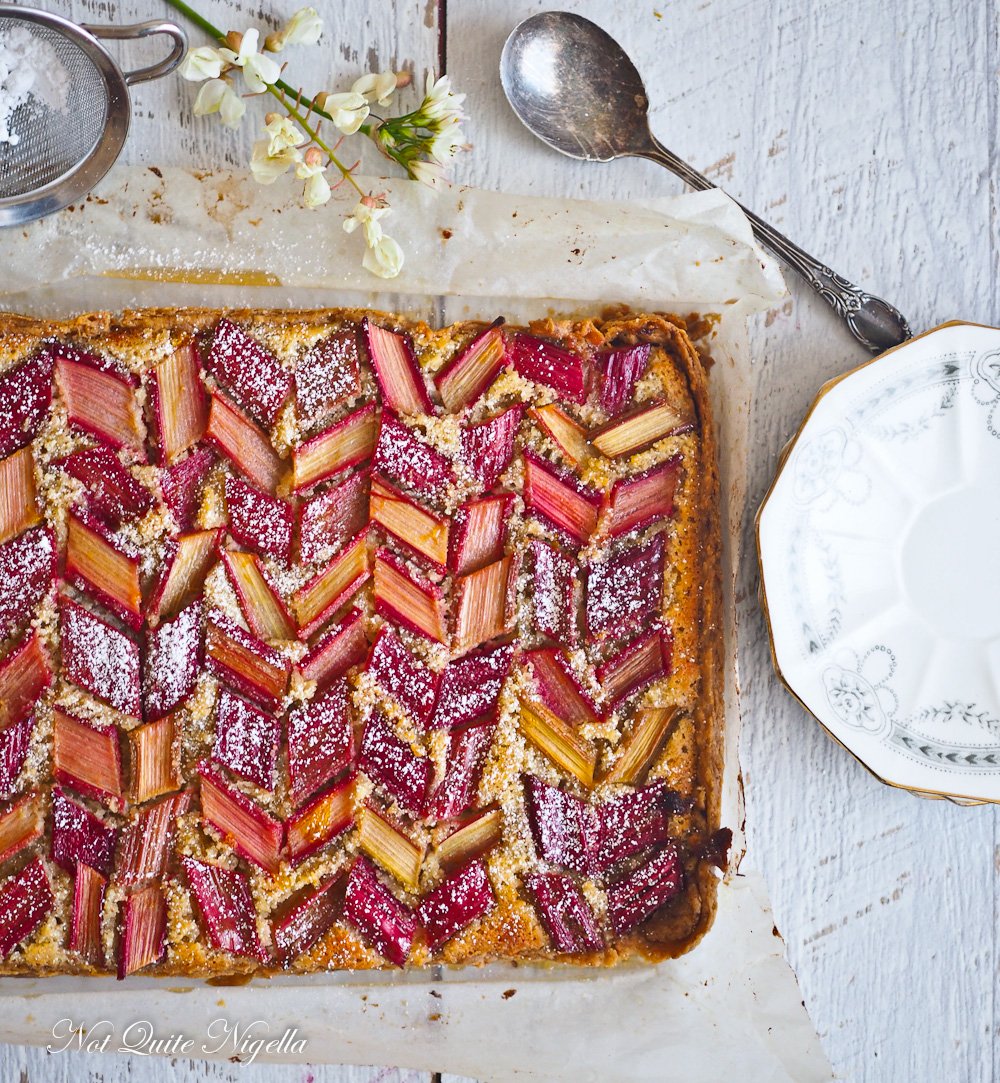 Although patterning rhubarb in a chevron is beyond me and I am uncoordinated, sometimes Mr NQN warns me when it isn't necessary. "Don't fall off the edge of the bed," he will say to me every now and then. I may be pretty bad at things (catching balls, running, any sort of ball sport except one involving meat balls) but I had to point out to him that at no time in my life, adult or child, have I fallen off the bed. I could tell that he didn't believe me. So I looked him straight in the eye and said unblinkingly, "Honey my greatest physical achievement is that I haven't fallen off a bed."

And that I exercised some restraint when eating this tart ;)

So tell me Dear Reader, have you ever fallen off a bed? And how is your co-ordination? And would you find the chevron pattern a cinch? Are you a visual person? And are you a fan of rhubarb? 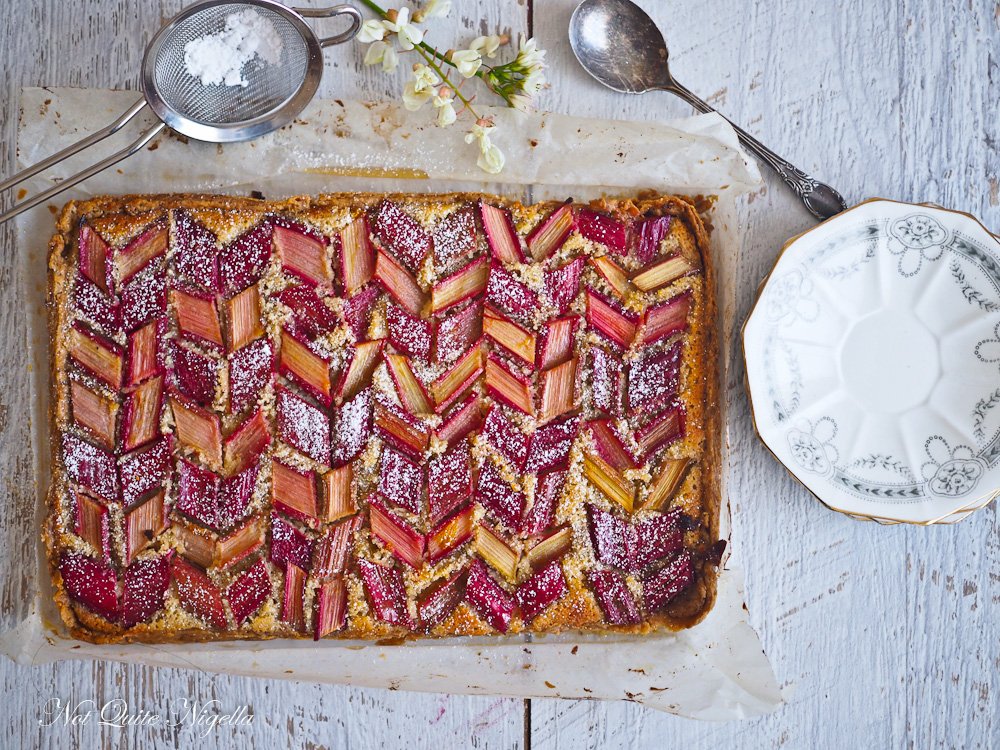 Preparation time: 1 hour (depending on how fast you are placing rhubarb too ;)) plus resting time

To brown butter, place in a saucepan and heat on medium to high heat until it turns brown and smells nutty. For this recipe, allow to solidify again in the fridge to become a firm butter. 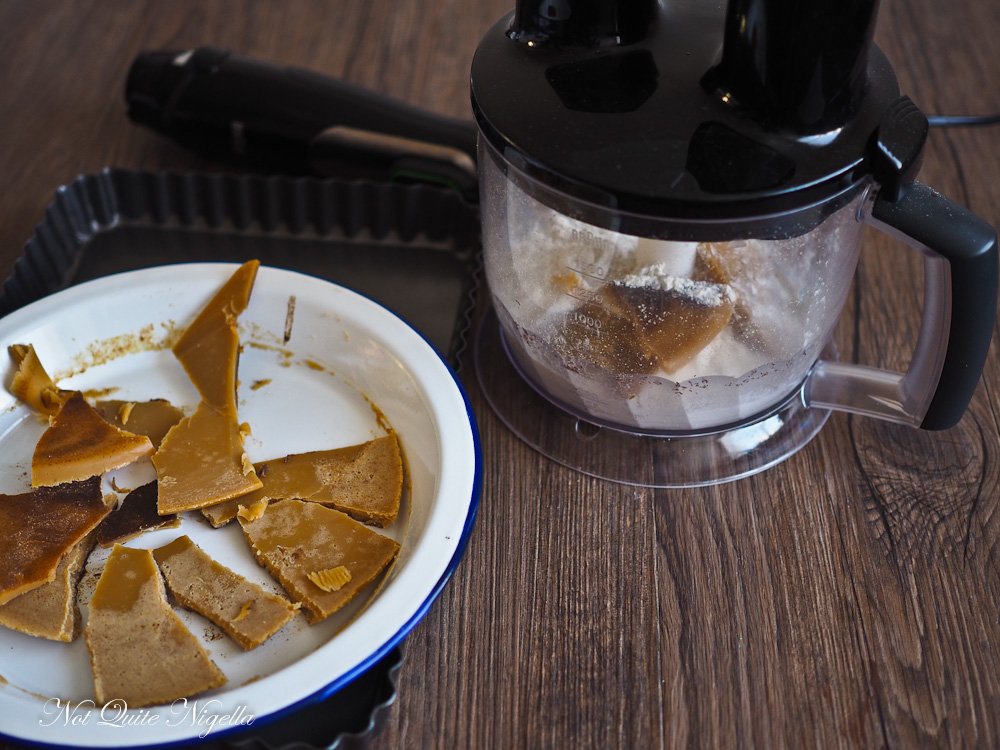 Browned butter after it has been set again in the fridge

Step 1 - Line a 30x20cms (12x8 inch) tin with parchment on the base and sides. Preheat oven to 190C/380F. Combine the ingredients in a food processor and blitz until it becomes a dough. Shape into a round, wrap in cling film and rest for 60 minutes. 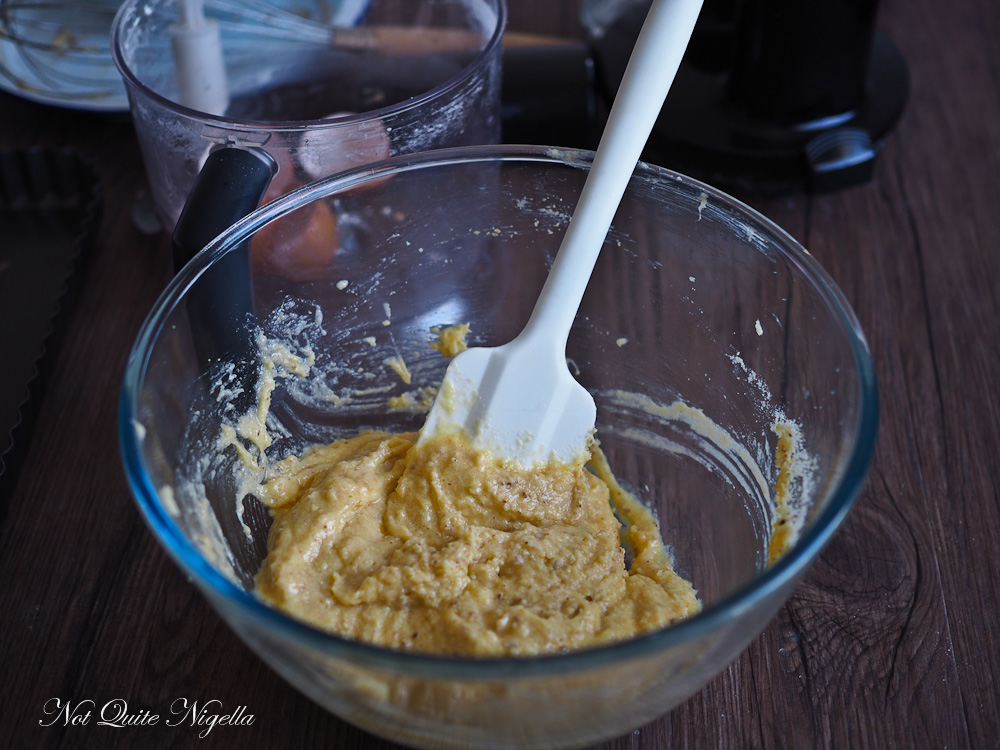 Frangipane (does not contain frangipane flowers)

Step 2 - Make frangipane by whisking butter and sugar until light and fluffy. Whisk in the eggs and fold in almonds and flour. Cover and set aside. 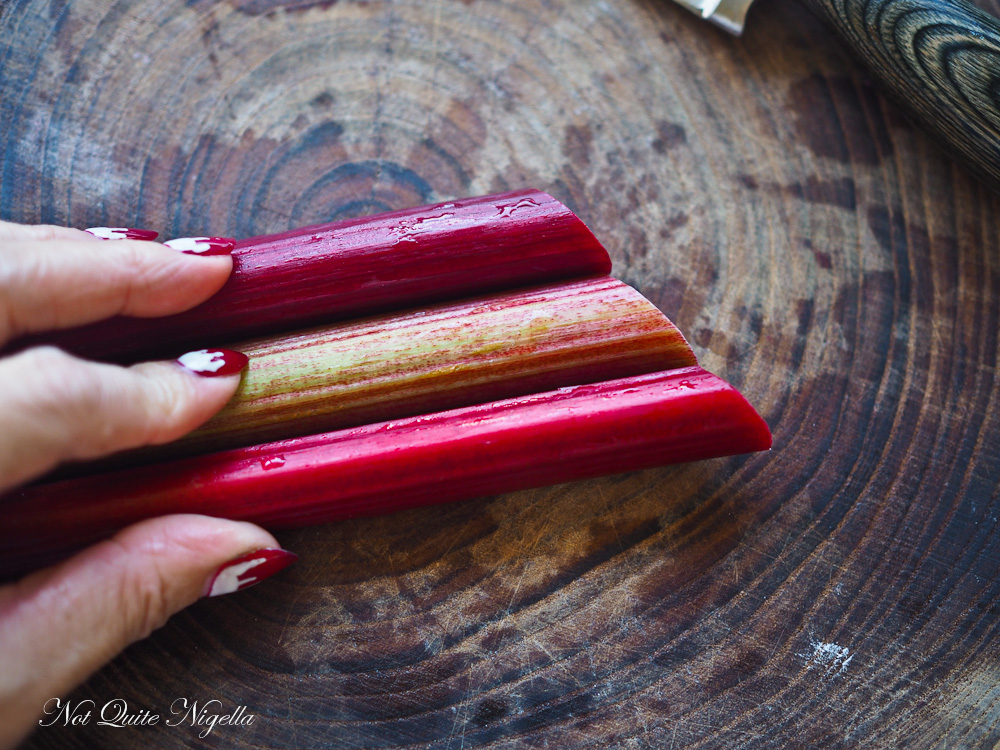 Cut together so that they stay roughly the same length 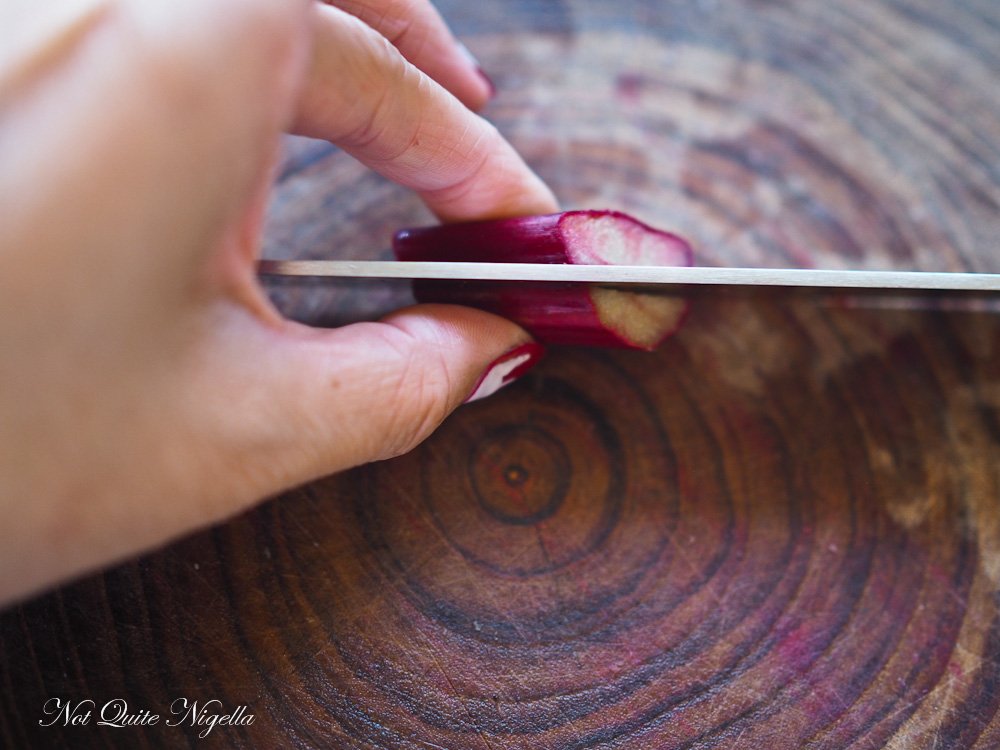 Then slice in half horizontally

Step 3 - Cut the rhubarb diagonally into 2cm pieces or just under an inch. Then with each diagonal piece, cut in half horizontally. Toss with the orange zest, juice and sugar for 15 minutes. 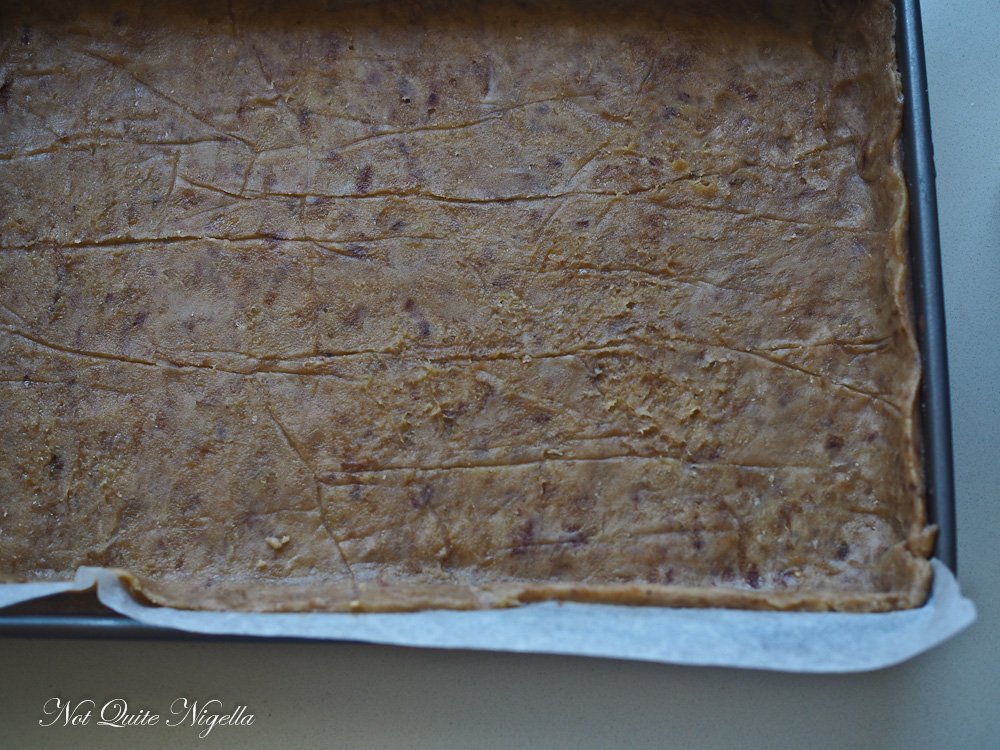 Step 4 - When the dough has rested, roll it out thinly to fill the tin to the edges and up-you can leave some overhanging and fold it over the rhubarb. Line with foil pressing down on the corners and weigh down with baking weights. Bake for 45 minutes or until crisp and biscuitty. Cool for 15 minutes. 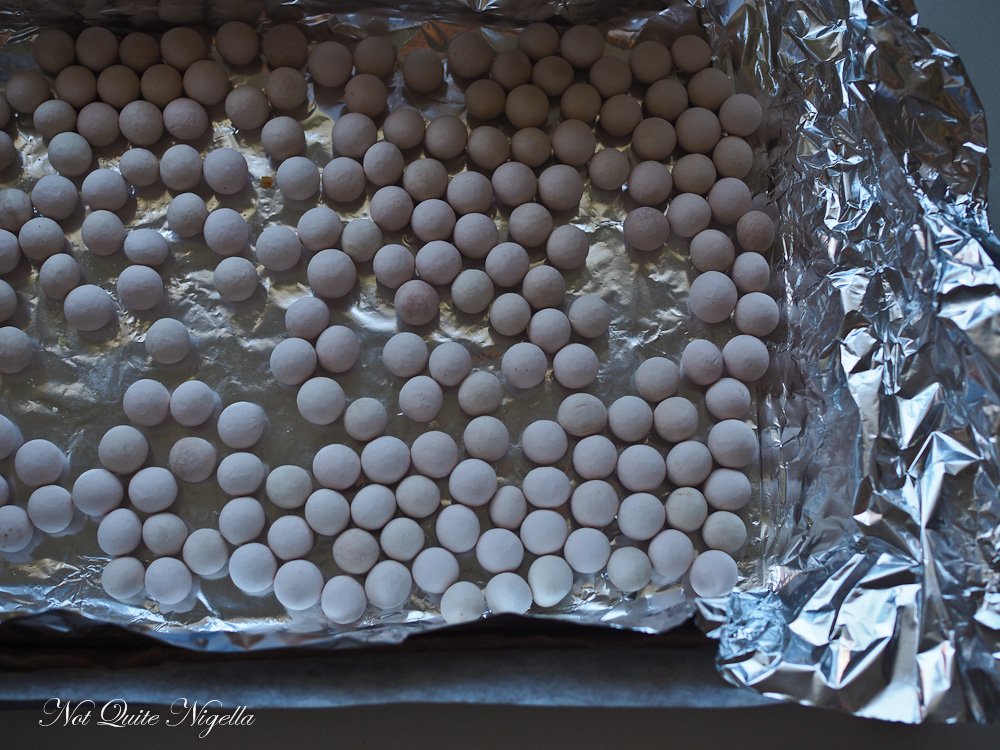 Step 5 - Spread with frangipane and then top with the rhubarb in a chevron pattern (leave most of the juice behind as it will make it quite wet). Bake for 30 minutes and dust with icing sugar. 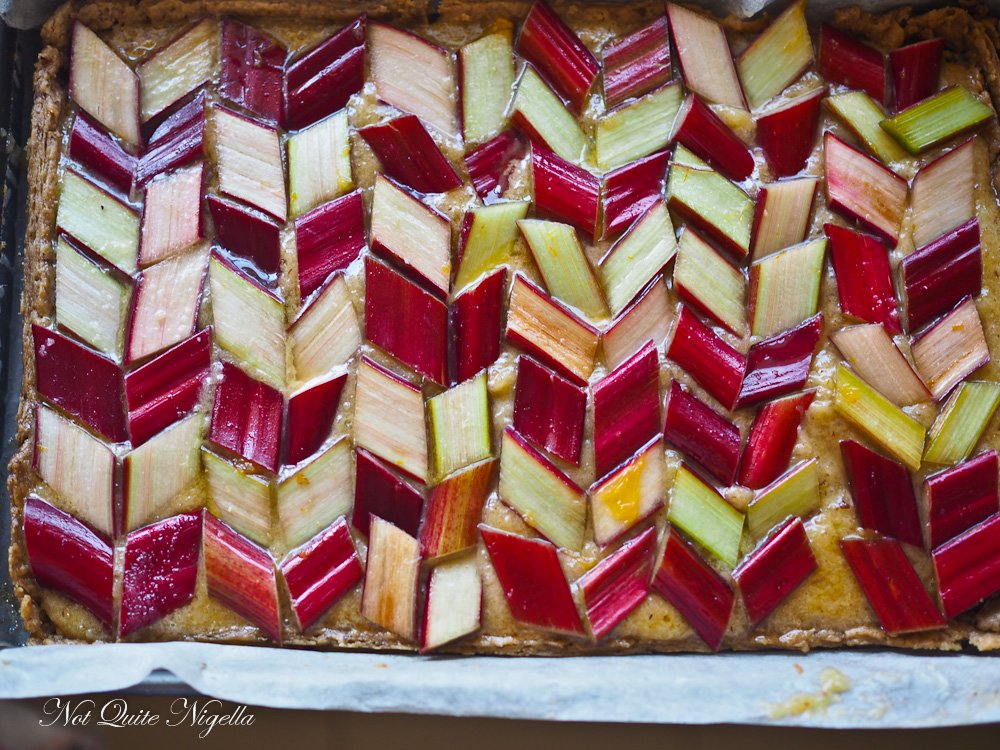